First long walk of the year and the completion of the Far Eastern Fells. I had the two Wainwrights on either side of the Longsleddale valley to do and opted to do them from Sadgill rather than from the end of Haweswater.


2016-04-01_Longsleddale Hills.gpx Open full screen  NB: Walkhighlands is not responsible for the accuracy of gpx files in users posts

It was the last day of my Easter break and having had a few days in Edinburgh I had the feelin that I was going to miss out on the good weather. The forecast was for rain (and wind) to move in from the west by lunch time so an early start was required. As it happened, I was parked and walking by 9.05am, not as early as some, but I was quite pleased! Sadgill, looking back to the car On the track above Sadgill A little higher, looking back to Sadgill

I chose to do Shipman Knotts first and then in a clockwise directions thereafter. So, went over the bridge and followed the track sign posted to Stile End. This track gradually steepens and then tops out and an obvious path is picked up to take you up to Wray Crag, a subsidiary top on the ridge of Shipman Knotts. I enjoyed this part of the walk with the path weaving in and around little outcrops of rock. At this point he weather was still fine, however the sky was grey and over to the west clouds were beginning to roll in. It was also cold but I had managed to generate some heat and didn't linger too long when I reached SK so as not to cool down. 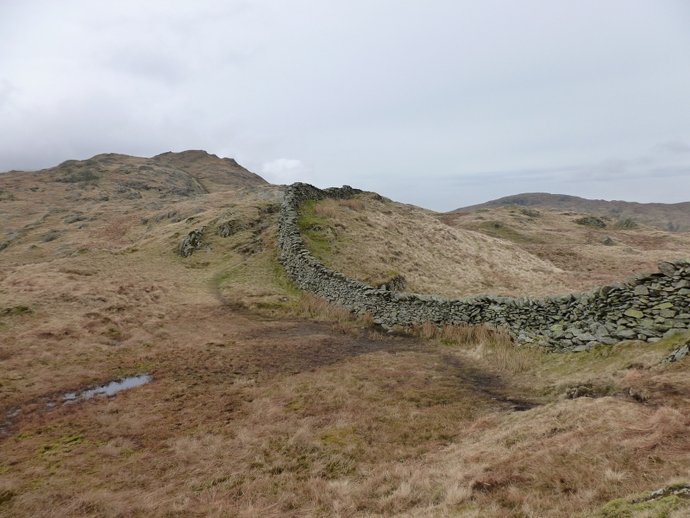 Between Wray Crag and Shipman Knotts Looking back (trailmasher had similar photo with a dead sheep - most of it has now gone !) View to the Kentmere Hills 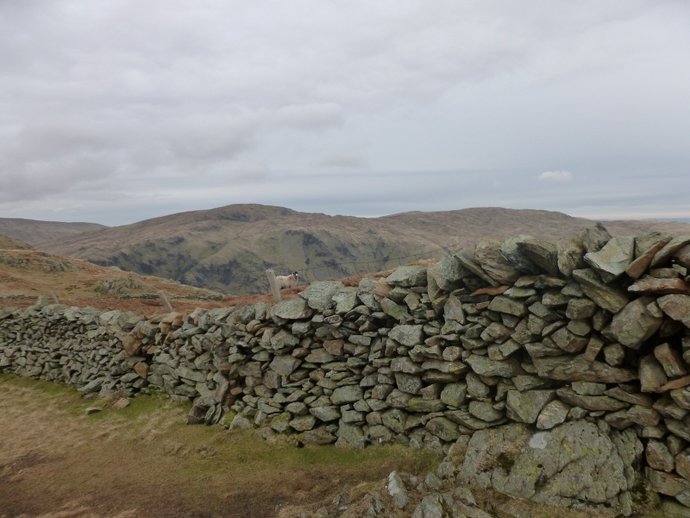 View from Shipman Knotts back down Longsleddale 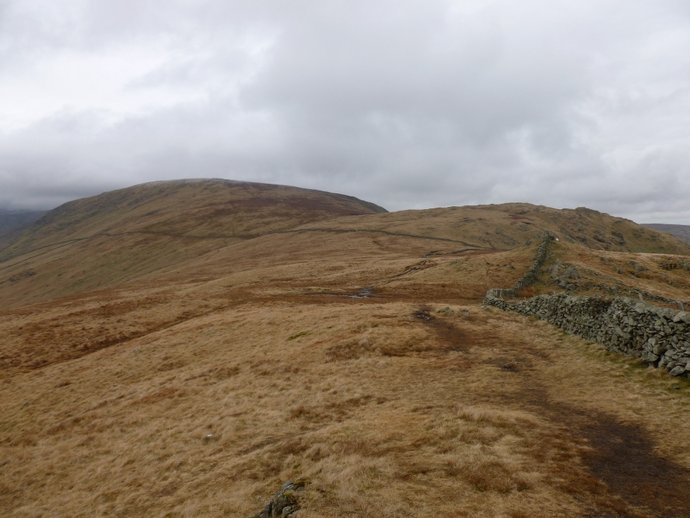 Looking up to Kentmere Pike

I had been following the dry stone wall since Wray Crag and this continued down and along to a stile which I crossed so that I could take in the minor top, Goat Scar. However, as I dropped off the stile, I could feel the calf of my right leg becoming stiff and painful. I decided to have a breather and give the muscle a rub. So I undid my gaiter and gave the calf a massage. I was cooling down so donned my hat and coat and also had some food and drink.

As I got to my feet, it soon became clear that the pain had not been aleviated. I thought I would try and walk it off but also didn't want to overdo things - my main aim was to do the four Wainwrights so Goat Scar could wait for another time. I continued onwards and upwards to Kentmere Pike. The weather was now closing in and clag was intermittently coming and going. Snow patches began to appear and the grass had half inch blades of frozen dew/snow. Surprisingly, I was still making good progress - walking poles were helping take the weight from my leg and short, controlled steps seemed to propel me quickly to the summit. I crossed the stone stile in the wall to have a photo at the trig point. The wind was strong and cold and nearly dumped me on the ground when I tackled the stile on the return. 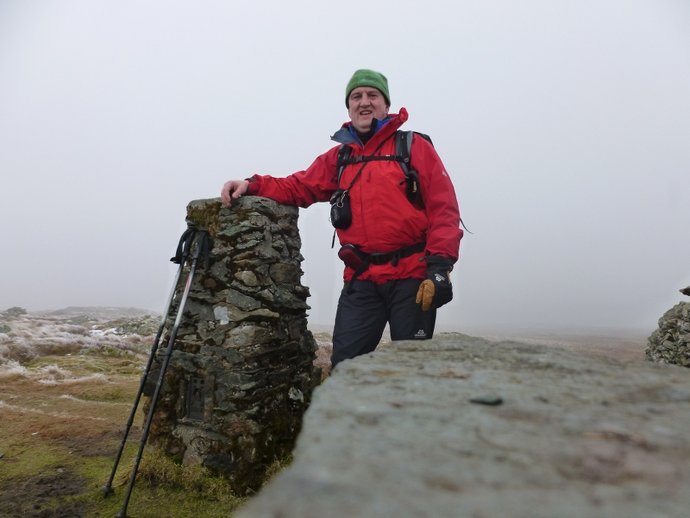 Getting higher and colder on approach to Harter Fell

My next target was Harter Fell. I dropped down to Brown Howe and then gradual climb over The Knowe and following the boundary fence direct to Harter Fell summit cairn which is a mixture of stone and iron. It was almost white with frost and blown snow. The wind had really picked up now and as I quickly moved on and down to Gatesgarth Pass, the wind was blowing new snow and stinging the right side of my face. 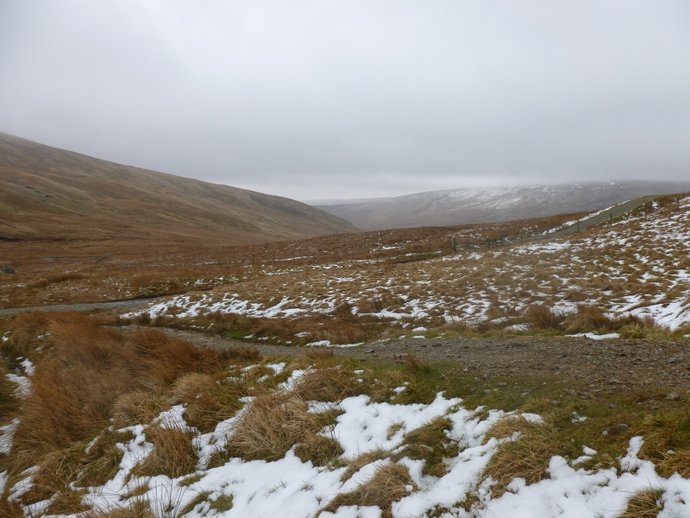 As I reached Gatesgarth Pass I decided to stop and contemplate my next move over a sandwich and coffee. My original plan had been to either go up Branstree or at least contour around its southern flank to pick up the fence and path at the head of Mosedale. A notoriously wet area of ground, it didn't appeal to me today with only one good leg and the weather seemingly set in for the day. So I carried on down the very good, broad path towards Sadgill.

I dropped below the cloud level and could see across to where I should have been walking. It still didn't look appealing. I came upon a small landslide that was obviously a remnant of the winter storms. 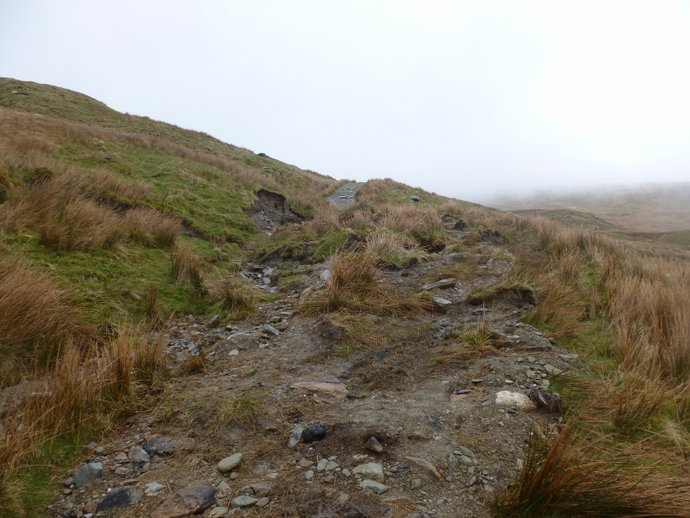 As I reached the sheep pens I began to have a change of mind. I had come to do all four hills and although I wasn't moving well, I had still made good time. Looking down Longsleddale there appeared to be some brightness in the weather. I looked at the slopes leading up to Tarn Crag and could see a fence going directly up the hill, the gradient wasn't too bad and the terrain seemed reasonable. I decided to give it a go. At the sheep pens looking at climb up side of Tarn Crag.... ... looking back to my descent from Gatesgarth

I surprised myself with the progress I was making and couldn't help thinking that this relatively dry underfoot conditions were at a contrast to the reports I had read about the other route. I eventually reached the end of the fence, climbed over another and I was then out into open ground. Now in the clag again, I took a regular look at my GPS to make sure of the correct direction to get to Tarn Crag summit. It wasn't long before the survey post came into sight. I wandered over to the cairn first and then back to the survey post. I was now exposed to the full force of the wind and snow and sheltered behind the survey post to gather my thoughts and check the direction I needed to go to get to the last hill, Grey Crag. 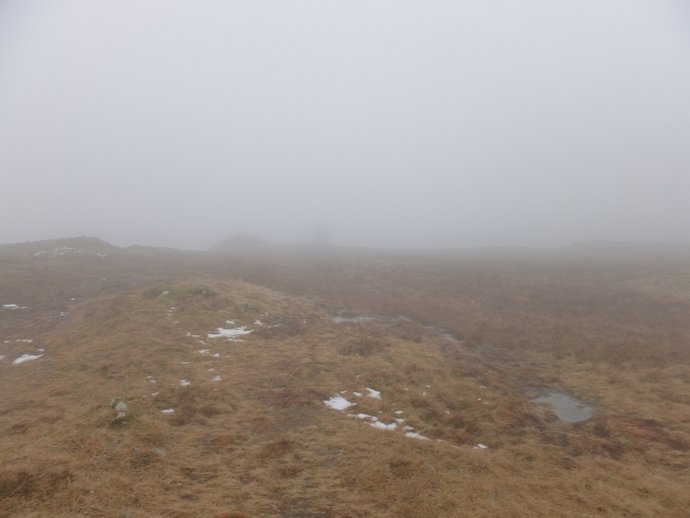 From the cairn to the pillar - yes its over there!!

I picked up the fence and the path runs next to it. Views were non-existent and it was simply a case of getting my head down and battling the wet areas underfoot and the wild conditions above. The path eventually deviated away from the fence and I was soon at the exposed summit of Grey Crag. I visited a number of the rocky outcrops and trust that one of them is the top. I didn't get a photo as there was no shelter and my camera lense was beginning to show the effects of the day.

I didn't hang around too long. I re-checked the direction of descent and picked up the path that leads down to Great Howe. Now below the cloud again, I had views across to Shipman Knotts and up and down Longsleddale. Dropping between the crags, over a stile and then steeply through some pasture land, I was soon back at the track leading from Gatesgarth and a few hundred yards back to the car. 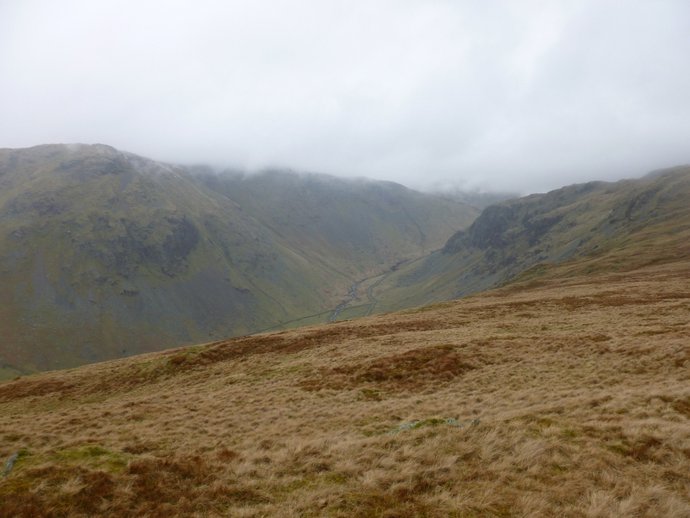 Now below the clag again, looking in the Gatesgarth direction 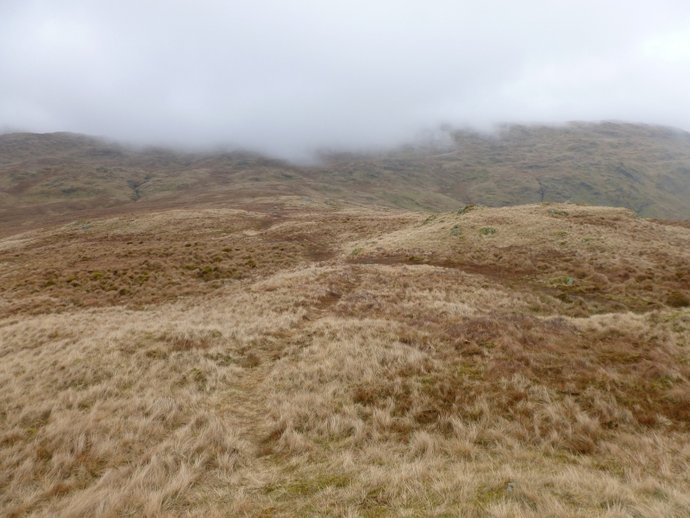 Final view (or not) back to Grey Crag

It had been quite a challenge, but one I was pleased to have taken on and overcome.

Congrats on completing the far eastern fells MR, specially with a dodgy calf from the early stages, it looked bloody cold on Harter Fell summit

ChrisW wrote:Congrats on completing the far eastern fells MR, specially with a dodgy calf from the early stages, it looked bloody cold on Harter Fell summit

Thanks for your kind words Chris. Thamkfully the calf is improving. Probably just a sign that I'm unfit and overweight!

MiniRambo wrote:Probably just a sign that I'm unfit and overweight!

Me too mate, but we're still out there doing it