...the Corbetts and Grahams of the Southern Uplands, that is. Although the Borders scenery is very pleasant in places, Fisherfield it isn't. It's always a bit of a challenge to motivate myself to go down this way, as it's a long way from Inverness, and there is very similar hill country in Moray and Aberdeenshire, a quarter of the distance away. Dun Rig had been eluding me for a year or so now.

I had a training course in Edinburgh on Thursday, so it seemed like a good opportunity for a day of leave on Friday and a couple of nights at my sister's place in Roslin. I had talked up Dun Rig as one of the more pleasant Borders hills, so had persuaded Laura to come along with me. Unfortunately unlike Thursday (which was stunning), Friday was to be a bit miserable. I had a look at the map and decided on a shorter round from Glen House to the east, rather than the normal Glensax circuit. Laura drove us there - only 25 miles away from her house, and we started walking at around 11am. The weather didn't feel particularly promising (cutting breeze and some light rain) so we stayed in the shelter of the glen for the approach to the hill. 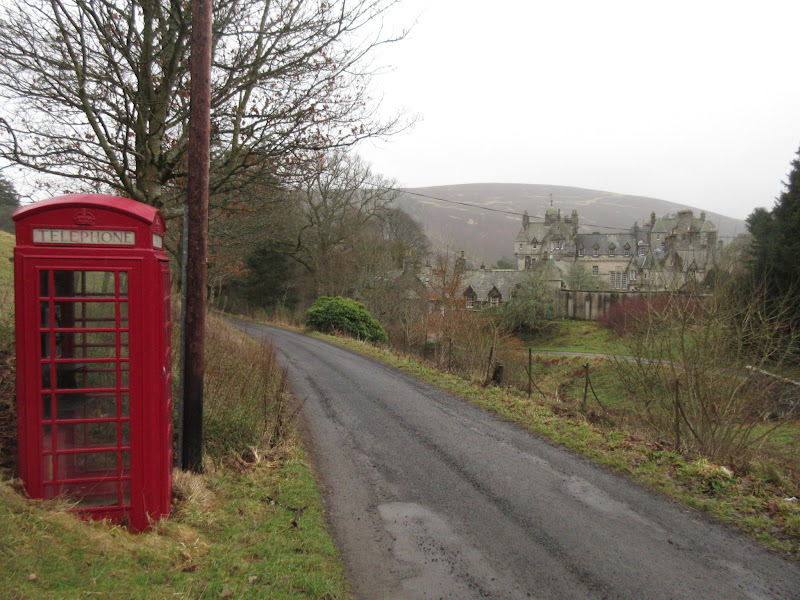 The walk up to Glenshiel Banks was pleasant enough, with the steep glen west of Deuchar Law looking rather attractive. After I had taken us on a pointless diversion outside the grounds of the cottage (looked sensible initially, but we ended up walking past the door anyway), we stopped for lunch. I had visions of it being a bit miserable higher up, so thought we might as well enjoy the shelter of the glen while we had it. 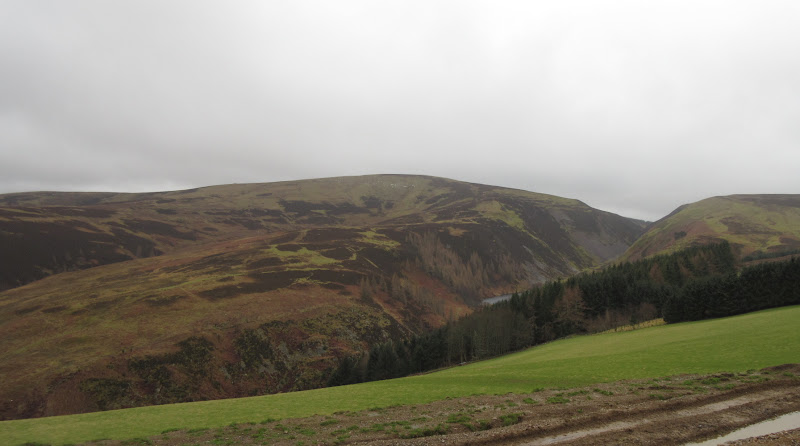 Dun Rig from near Glenshiel Banks: 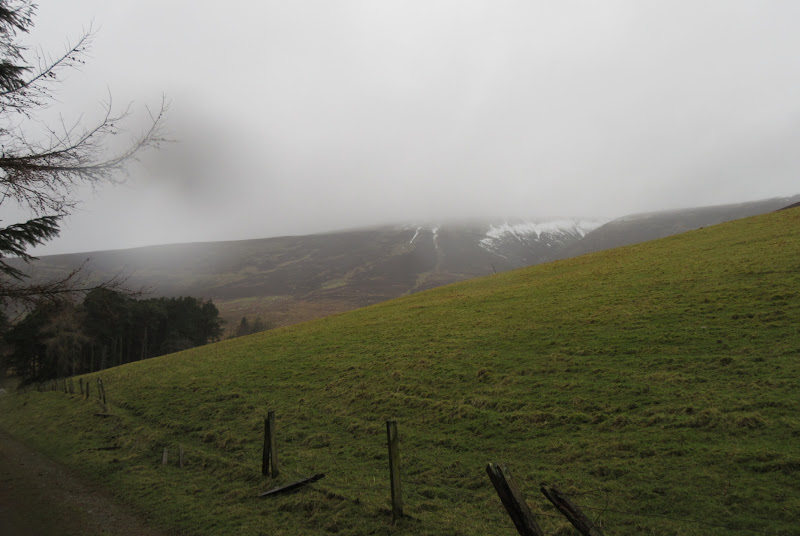 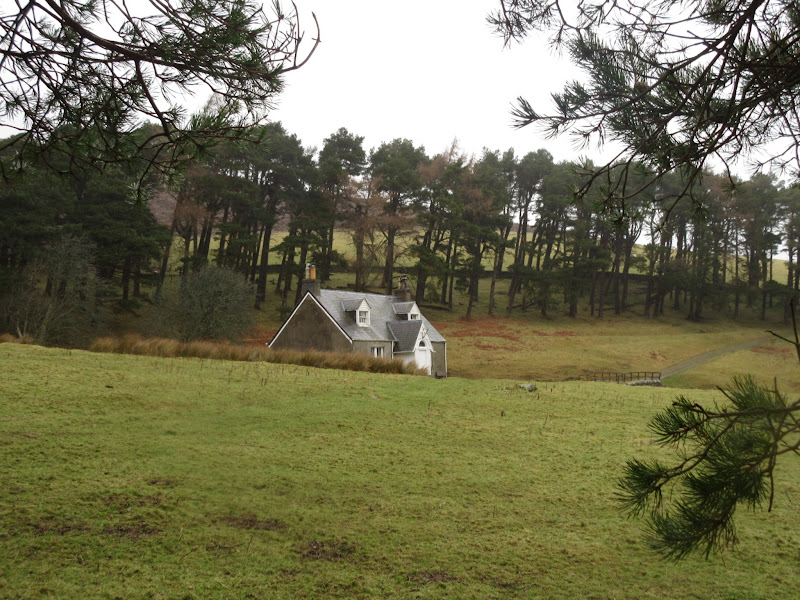 Then it was onward up a fairly distinct quad bike track towards the ill-defined southern spur of Dun Rig. Somehow this went from obvious to non-existent over a short distance, leaving us floundering through deep heather for a bit. Laura is much less keen on this sort of heathery floundering than me (and I tolerate it rather than actively enjoy it), so we crossed a burn and found an easier line onto the ridge. From here onwards the going was fairly straightforward. 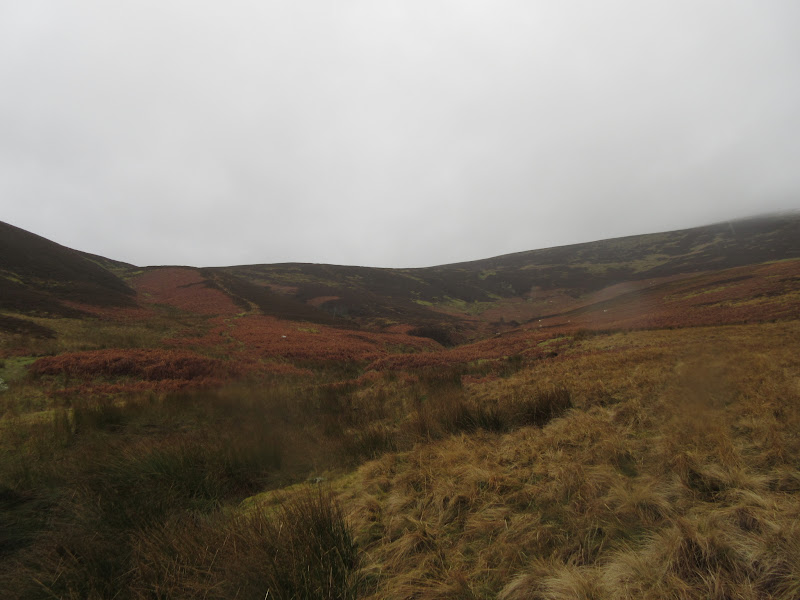 The ground became firmer and the heather shorter as we gained height, and we finally hit the snowline. There wasn't a massive amount of snow left on the hills - having seen other reports from last week, I wasn't sure whether to expect knee-deep floundering or not. Before long we reached the trig point.

Laura on the summit: 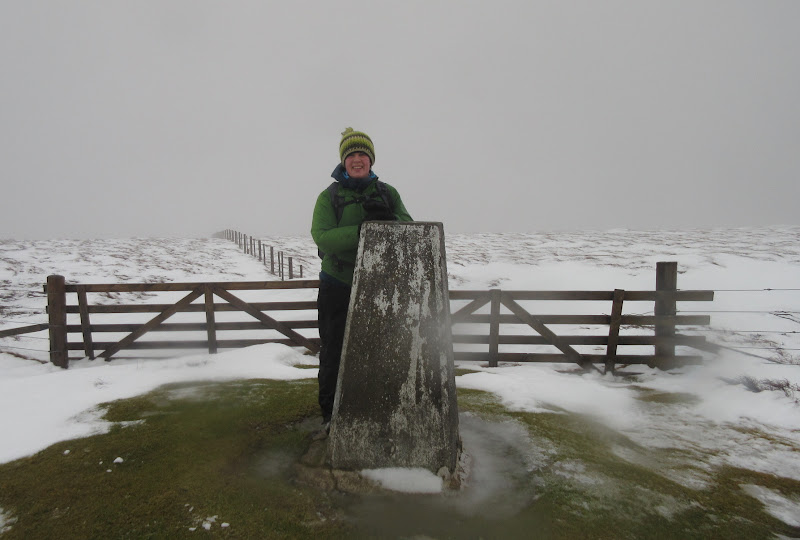 At this point it was a little blowy, and I suggested we dropped back in a more direct line to Glenshiel Banks. The wind seemed to be behind us for this anyway. After a few minutes, Laura mentioned that she was sure we were going in the wrong direction, but I was pretty confident we weren't. At this point, the clag blew away, and the view looked rather different to what I expected. A quick look at the map showed we were about to drop into Glensax

. We retraced our steps a little and contoured across a wide spur, before meeting a fence and path across Stake Law.

Me on Stake Law: 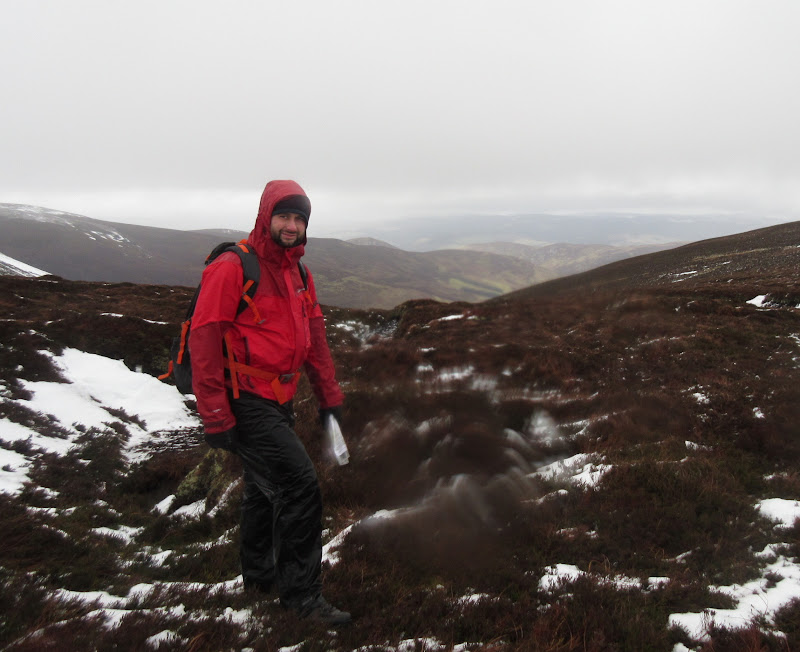 While the option to drop into the glen was still there, the improved visibility and wind at our backs had us carrying on towards Birkscairn Hill. As there was a reasonable path, this seemed like a good idea.

Looking back to Dun Rig: 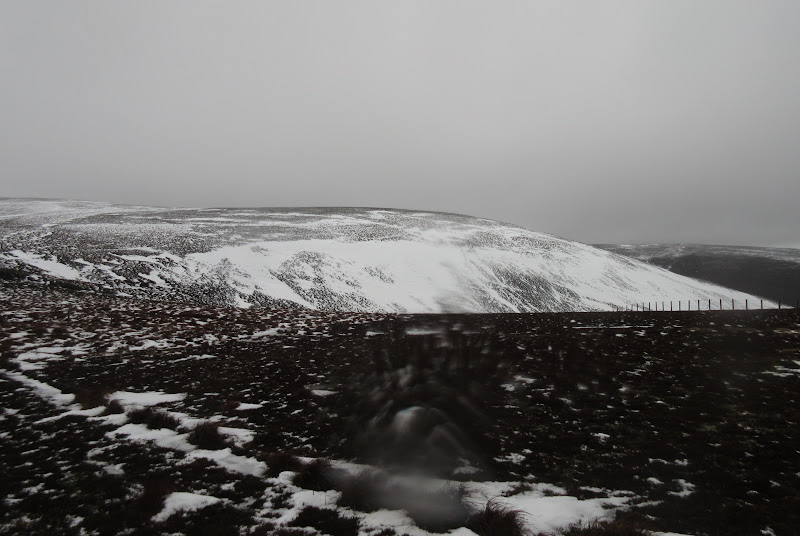 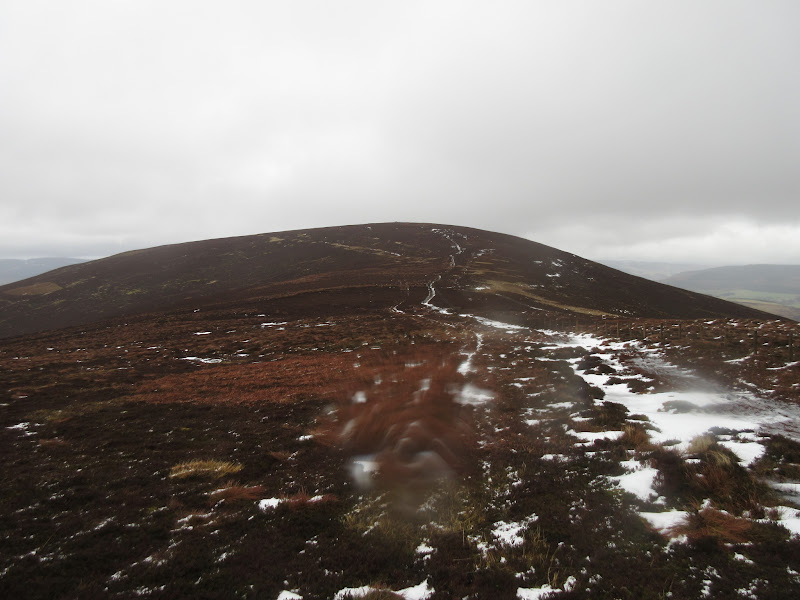 From Birkscairn Hill, we could see the old coach road that climbs up from Peebles and is the more usual way up Dun Rig. While I had quite fancied this, our route from the east had been just as nice, and certainly marked the range out as one of the more varied ones in the Borders region. 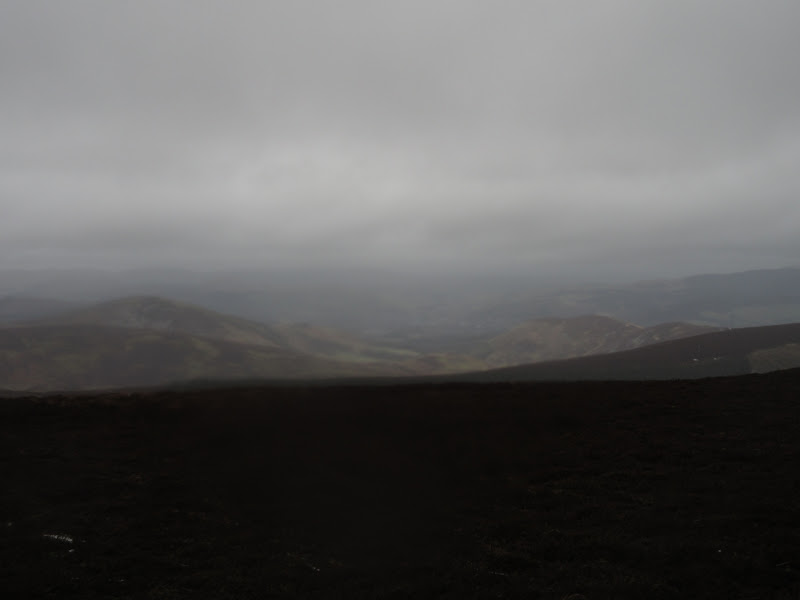 We left the good path behind and followed a smaller one to Birks Hill, then dropped down alongside a line of grouse butts. Following the N ridge of Birks Hill towards Little Craigie Side may have provided a more pleasant way down, but it all came to the same thing in the end, following the access track to Birks back down to Glen House. It was then a short walk back down the road to the spot we'd left the car.

Not the weather I really wanted for this hill, but the walk was reasonably varied and quite pleasant (as much as it could be given the conditions). Considering the amount of peat haggery present in the Southern Uplands, there was remarkably little on this walk - just the part above Glenshiel Banks where I lost the best route, and a short haggy bit on Stake Law.

Just noticed this trip. You'd a good approach. Dun Rig might not be compelling but it can be incorporated in a lot of routes, north, east west and south. I've even done a big circuit to Broad Law with a bike stashed at the head of Manor Glen. It's also weird on a wild day doing the standard circuit coming down plastered in snow into Peebles and finding yourself stared at by old dog walkers.

There's also the sociological history. The Glen was where the Incredible String Band lived in a cottage when they were making the classics "5000 spirits or the Layers of the Onion" and "The Hangman's Beautiful Daughter". Sounds like a nightmare of the 60s but they were the only Scots who played at the original Woodstock and I still find myself (if I'm alone in the house) picking up a guitar and assaulting The Hedgehog Song.