There are days when our surroundings put us in awe of our landscape and often make the aspiration to touch a summit cairn a mere secondary afterthought. Snatching days here and there, as and when the opportunity arises, can lead to bagging for bagging’s sake: not on this quick trip.

As the winter began to fade and days stretched imperceptibly into ever-so-slightly lighter evenings, I’d kept my options open. Just before Easter, the Cairngorms beckoned as the weather system kept the best of the conditions in the north east.

I wasn’t sure if a traverse of both Beinn a Bhuird and Ben Avon was going to be on the cards as I pulled into the parking space at Keiloch after driving north from Ayrshire. I was simply glad to be out again and would let the day make the decisions for me. An empty car park at Keiloch

Clearly, the early start wasn’t as early as it should have been. The time on the parking ticket of the only other car in the car park read 06.15am: I arrived at 8.45am. Question mark number one was lodged in my brain.

The cycle toward the ruins of the Slugain Lodge made for a gentle loosening of car-bound muscles as Invercauld House and Altdourie were passed. Once the signs for the Linn of Quoich had been passed and ignored, rougher stretches of track made progress slower. The winter storms clearly caused a lot of damage and the reinstatement of tracks has yet to settle-in to allow an easy ride.

Slugain Lodge is a curious jumble of masonry nestled into the narrowing glen. From a distance it looks like it’s been constructed from breeze blocks but, on closer inspection, the stonework is immaculately dressed, out of place where rough-hewn stone would have been expected: in all, a curious little corner of the Cairngorms. I didn’t search for the Secret Howff, and I gather earlier plans to rebuild the lodge and create a new bothy caused some controversy in the past. Lochan above Slugain Lodge - with slopes of Beinn a Bhuird beyond

Beyond the wee lochan, I crested the watershed and was confronted with the expanse of the upper reaches of Glen Quoich. Looking at maps, reading guidebooks and browsing reports it’s all too easy to misjudge the sheer scale of a place. The prospect surpassed expectations, and question mark number two arrived.

Beinn a Bhuird across the upper reaches of Glen Quoich

I half-heartedly pottered towards the foot of Carn Fiaclach, across boggy ground and an indistinct path: thoughts of getting to the southern top of Beinn a Bhuird were only half-formed. Then my eyes were drawn to the clarity of a track on the eastern side of the glen, scratched across the hillside and offering far gentler progress. Question mark three swithered between doing the circuit anti-clockwise or simply opting for a less challenging single objective: Ben Avon.

Once striding along the track, the surrounding skyline towered and swept. The landscape spoke: take your time and enjoy me. Massive corries below the tops of Beinn a Bhuird stared down suggestively: go on, just enjoy a stroll. The question marks transformed into an unmade and unconscious decision.

So I ambled. I stopped at streams of meltwater to keep dehydration at bay. The vastness of the glen humbled my original aspirations and, by the time I reached the Clach a Cleirich and the tumbling waterfalls of the Glas Allt Mor, I knew I was just heading for The Sneck and Ben Avon. Waterfalls of the Glas Allt Mor at Clach a Cleirich

Corries below Beinn a Bhuird

A few hundred steeper metres and the entrance to the side glen was breached. Gone were the mountainous crags and gullies, replaced by the sweeping slopes of a squat U-shaped valley: a geography teacher’s field trip in miniature. Ahead, on the horizon, the serrated tors on The Sneck were the next objectives, before a relatively short ascent to the summit plateau of Ben Avon.

The jagged horizon of The Sneck

Two and half hours or so after leaving the bike a little below Slugain Lodge and I was at The Sneck, gazing down another glacial masterpiece, Slochd Mor. It’s time for lunch, the hills said, offering me an armchair of granite with a backdrop of views while I snaffled peanuts, half a sandwich and a fistful of jelly babies.

North from The Sneck - Slochd Mor - another A-Level geography lesson

The summit tors stood proud across the plateau and offered the satisfying temptation of a scramble to ensure the highest one was reached. Barns, tors? Whatever. They made an impressive culmination to the effort expended so far and offered plenty of cosy corners to snuggle into as I ate the other half of the sandwich and the mush of a battered banana.

To the west clouds were beginning to roll across the tops of the Cairngorm giants, threatening an early advance of the forecast front. Meanwhile, across Cnap a Chleircih, the tops of Beinn a Bhuird caught shafts of sun and seemed to make a Siren call: come on you wuss, it’s not that far. On the other hand, a darkening horizon and those rolling clouds were making calculations and throwing down a challenge: it’ll add at least another hour and a half; what do you want to do, endure or enjoy?

The argument was in vain. Subconsciously I’d made up my mind: mentally I was already on the way back down. Cnap a Chleirich from above The Sneck - Beinn a Bhuird beyond

The descent from The Sneck back into the glen was a mixture of slither, plod and thigh-deep plunge as the stretches of snow had softened in the sun. Being back on the track meant returning to an ambling stroll with no knee-jarring steepness and the gentlest of undulations to get back to Slugain. 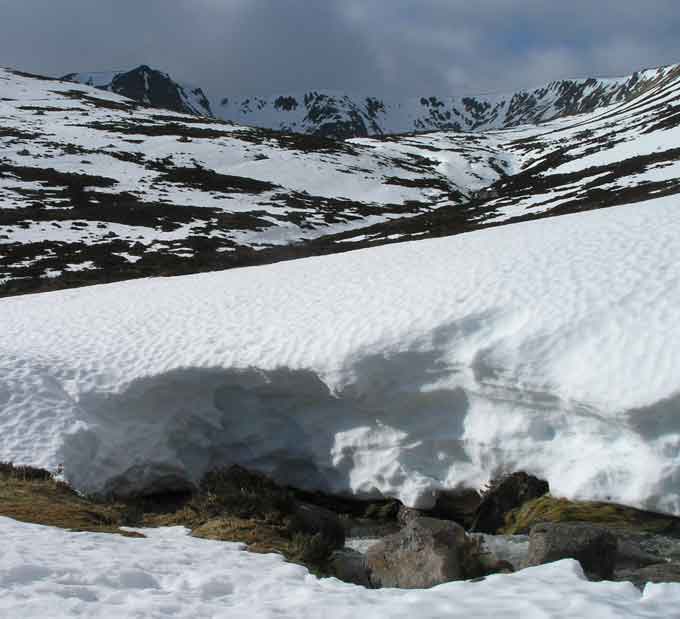 I’m normally a “circular route” kind of guy, and can often be relied on to make detours and extensions to avoid retreading the outward journey. Today was different. Familiarity with recently acquainted surroundings made for a strange contentment, although a brief juddering hurtle once the bike had been collected kept me sharp for a while as I returned to the car.

The day’s surroundings had made my decisions, gently ushering me along in one direction then another. The vastness of that part of the Cairngorms reminded me that it had been a long time since I’d simply enjoyed wandering along a glen.

And I hadn’t seen a soul – so it must have been the landscape talking to me.

A reminder to me that I need a new bike. How much time did cycling in save you?

After being up in June it's great to see it again - albeit with a bit more snow about!

That's a cracker, Nigel. I hope to make it up there myself this year. Where next?

I loved my long day to Ben Avon, had my spikes on for ages

Took a slightly different route in to you - not intentional, returned the proper way

Wonderfully written and it reminds me that I have to tackle that one as well. Would you say its doable with a road bike??

Beautifully written report, that really does reflect that wonderful feeling of being out in such a fabulous landscape.

The persuasive eloquence of a very poetic report. A really page-turning read.

It - and the pics - could almost persuade me to move the Cairngorms up my "to do" list.

A reminder to me that I need a new bike. How much time did cycling in save you?

It took me just an hour to cycle 7km from the car park at Keiloch - and 45 minutes back - hope that helps save a bit of time to enjoy the hill.

Mountainlove wrote:Wonderfully written and it reminds me that I have to tackle that one as well. Would you say its doable with a road bike??

My bike is just a hybrid townie - see photo below - ok there's no flash suspension, springs on the forks or an experienced mountain biker in the saddle - but I makes do.