Better late than never, a report of a beautiful sunny, snowy late February Sunday run over the eastern part of the high Ochils.

There was hardly a cloud in the sky, so it was a perfect for a late winter day in the hills. And since the Strava target I'd set myself of a 10k run by the end of February had been surprisingly tricky to reach, with only 2 days left I reckoned I could combine things. So I decided on an anticlockwise loop over Tarmangie and Innerdownie, taking advantage of the forest road up Glensherup.

That turned out to be a wise choice, as the low sun and snow high up was pretty intense on the eyes, and I hadn't brought any shades to wear The route I planned meant most of the time when I was heading W I was in the shade

So I left the car at the Glensherup car park, and headed SW up forest roads on the SE side of the glen. There was some occasional ice but nothing too tricky. The forest road eventually stops, and from there is the most awkward part of the route—along a sloping ride, negotiating the occasional windblown trees, out into an open area as the glen narrows. Then it was a case of picking a way down and across the burn, and then slanting up the SW slope of Scad Hill (gaining height even though I had my back to Tarmangie). The OS mapping of forestry in this area is definitely an exercise in future-proofing—most of the mapped forestry NW of Glensherup and SE of Innerdownie had hardly appeared above the ground! Out into the sun in upper Glensherup

Eventually I crossed the fence and followed it round to the Tarmangie-Cairnmorris bealach. 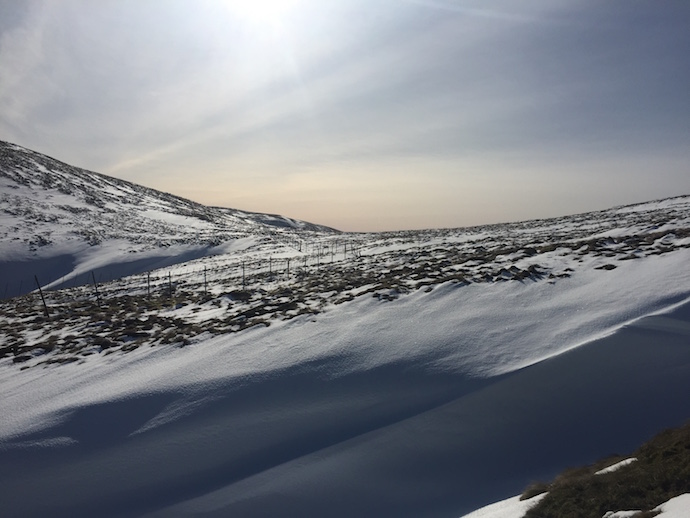 Heading to the Tarmangie-Cairnmorris Hill bealach

Now heading E, I joined a more obvious path for the final pull up to Tarmangie, where the views here were fantastic! After a couple of photos I headed ESE along the path to Whitewisp Hill, which has an even better vista south. Looking South over the Forth, from the top of Tarmangie Hill

I continued N along the path beside the ridge fence, over Bentie Knowe to Innerdownie. It's a nice wee rocky perch, with nothing higher to the E for many miles. Looking E from the summit of Innerdownie

My descent route followed the fence NE down the ridge sticking to the edge of the more mature forest (the OS 1:50k map doesn't show this forest edge at all!), and eventually finding the way marked route W into the forest at a firebreak. I followed this ride, beautifully carpeted with pine needles, down to the forest road, and then a couple of miles of zigzagging back down to the car park.