After many years of visiting this great website I decided today it was about time I signed up and started to contribute. Last weekend we were lucky enough to spend a few nights with friends in a cottage at Bridge of Orchy and the undoubted highlight was finally tackling Aonach Eagach!

On Saturday we walked via the Three Sisters to the summit of Stob Coire nan Lochan but were forced to retrace our steps rather than tackle Bidean nam Bian due to pretty hazardous snow conditions. The main positive we took from the day was the fact that Aonach Eagach appeared snow free and the forecast for the coming days was good.

Waking up to a bright Sunday morning we dropped a car at the base of the Pap of Glencoe and started off up Am Bodach at 10am from the small layby a couple of hundred metres above the large viewing car park. The views down the valley on the ascent of Am Bodach are impressive but I’ll admit to having a few doubts at this stage with a very stiff breeze and after seeing some fleeting glimpses of snow on the ridge when dropping the car off earlier. We could always just take a look and save it for another day.... Upon reaching the summit of Am Bodach the views are brilliant but the eye is inevitably drawn to the spectacular view down the ridge. For me, the nerves were building as we took the narrow path to the start of the initial down-climb but thankfully the wind had died down and the rock was dry and grippy. As you descend it’s difficult to ignore the seemingly endless void below but, if you’ve a head for heights, it’s a relatively straightforward scramble down on to the ridge itself and a relief to finally be on your way! Looking back at a group descending off Am Bodach

The walk along the ridge to Meall Dearg is narrow in parts but there’s a good path throughout and the views in all directions are simply stunning. We had to scramble off path a few times to avoid some remaining snow patches but nothing too difficult. The views from the summit of Meall Dearg were incredible but I couldn’t to take my eyes off what was to come… My memory of the next section of the ridge is somewhat blurred but I do recall some very narrow sections and the trickiest scrambling of the day! All smiles on one of the narrow sections!

I’d read plenty of advice about sticking to the ridge proper (and not attempting to skirt around on paths to the side) but when faced with what appeared to be an impossible obstacle we took a path around to the right... This was undoubtedly the most nerve wracking part of the day with an awkward and steep climb down a narrow and loose gulley (with a shockingly large drop below) before climbing back up to the ridge proper. At this point I was promising myself I’d never come back! Looking back towards the final tricky descent

Once you’ve descended off the last of the pinnacles the path over to Sgorr nam Fiannaidh, via Stob Coire Leith, is simple enough and an opportunity to take in the views. Looking back from the summit of Sgorr nam Fiannaidh With a few tired legs there was some debate about the merits of doing the Pap but all eventually agreed it was a shame to miss out given we had plenty of time and it had turned into a glorious day. The descent is slightly awkward over loose scree and is largely pathless and at one point I very nearly placed a boot on the very well camouflaged creature below! 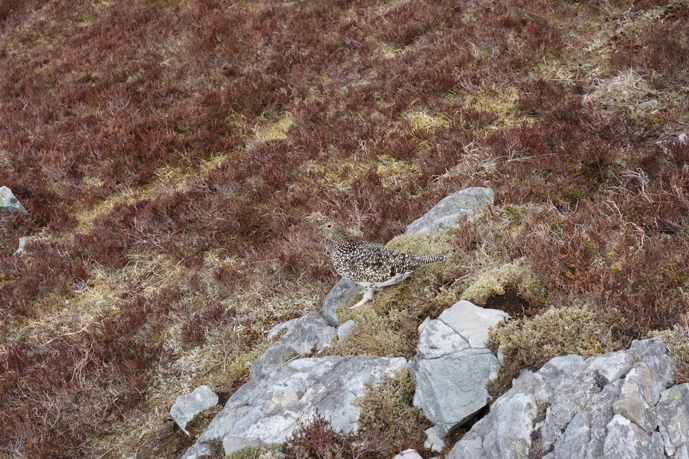 The scramble up the Pap was very rewarding and the views again were amazing. After some well-earned chocolate and 10 minutes taking in the views it was time to head down for a much needed drink at the Clachaig Inn. Looking back at the Pap fo Glencoe

What a day - Aonach Eagach certainly didn’t disappoint! I'd read enough to know what to expect but it's probably near the limit of what I’m comfortable with and, quite frankly, the prospect of being up there in poor conditions is pretty terrifying. Nevertheless, it's an amazing walk in an amazing place and whilst descending the Pap I was already wanting to go again!

Some great pictures in between 'em. Nice one.

Thanks Jacob, the views up there really are amazing, the pictures don't do it justice!