Parked on the south side of the A9 just east of Dalnacardoch Lodge where the cycle track splits from the Trinafour Road. Crossed the A9 and began the cycle northwards through the trees then beside the Edendon Water.

Then passed a semi ruin at Badnambiast, over a bridge, cycled through the water at a ford (with two tents set up on the east bank) and passed Sronphadruig Lodge before locking the bike to the fence at the north end of the trees.

Set off for An Dun – still cloudy and overcast at this point but previous light rain had stopped.

At the foot of An Dun, met three walkers descending. They were going back to their tents for food before starting on Maol Creag an Loch. Quite a steep ascent but did find parts of a track here and there.

Fairly featureless and flat summit – passed the first cairn and went to the second. A runner passed by and we had a quick chat – he was heading for Gaick and I was to be passed by him again near the top of Maol Creag an Loch.

Walked along the top then started steeply down towards the north end of the loch.

Briefly considered cutting straight across the pass and heading straight up to the 875m point (A’ Chaoirnich) but quickly saw sense and decided against it.

Instead, crossed the Allt and joined the path northwards towards Gaick opting to head up from the north.

Stopped for some food and remembered to take my pills – was on two courses of antibiotics for a tooth problem (absolutely no alocohol allowed during and for some time after the courses were completed).

Then started steeply up from the north side 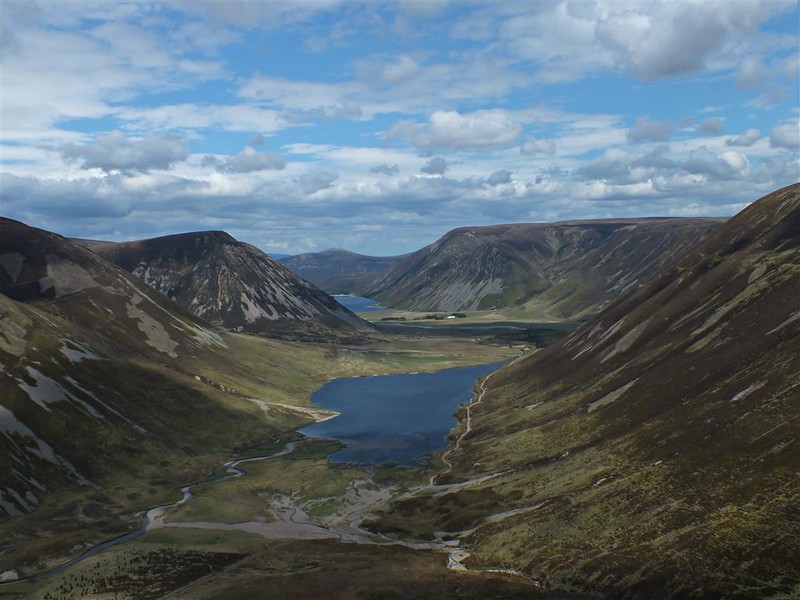 Nearly at the top the runner from earlier passed in the distance – think he had been further up into the Gaick pass before returning southwards. Got to the cairn with some reasonable if hazy views of the surrounding hills.

Walked on to the southerly cairn where I met the three walkers from earlier in the day – they had had a leisurely meal before their second walk of the day. Met one of their friends further down but he wasn’t sure he could catch them up.

Followed the track southwards before heading off steeply eastwards to get back down to the trees enclosing Sronphadruig Lodge.

Looking further to the south

An Dun and loch from the descent

Back to the bike then started back down the track. Passed Sronphadruig Lodge.

Needed somewhere to spend the night. This was to be the first trial of the new Exos 58 after Osprey had replaced the previous one due to a couple of faults. The padding looked thicker but the new one doesn’t have the rather handy two external vertical zipped pockets which were useful for items such as waterproofs.

The plan was to camp overnight on the The Fara…………..in the next WR

Good pictures as ever, rockhopper. I can't imagine I've driven over or near the Pass of Drumochter for the last time, even though I've no new Munros left to do that for. The area might be bleak but has a strange draw to it, and your photos remind me of that.

Nice photos and brilliant report with lots of useful info

- have almost headed for this duo a few times, but always seem to change plans last minute, although we did set out for them once but found that the snow was soft and several metres deep, so didn't even get close

Nice pics rockhopper. I've cycled through Gaick from Newtonmore to Blair Atholl on a couple of occasions, really is a superb area

Lovely photos as ever, good luck with the new Osprey pack