Two from Inverey: sauna and blisters

Two from Inverey: sauna and blisters


At last it's time to update my progress on WH

The first of my five holiday reports concerns a certain two Munros just south of Inverey. A couple of years back, we climbed Tulaichean and Righ from Spittal of Glenshee, suffered from nasty weather all day long. It was the day of downpours, cold wind and boggy terrain. We didn't even dare think about adding Beinn Iutharn Mhor. Another Munro in this area, An Socach, was climbed on its own in winter conditions. That left Beinn Iutharn Mhor and Carn Bhac, the last two M's in this area, an obvious approach from Inverey.

The long walk-in suggests bikes, but we wanted to camp and start early in the morning. The bike frame on our car is constructed in such a way, that when on, it blocks access to the boot. So it has to be either bikes or camping equipment. We went for the latter and instead of driving up to Braemar and back (5 hrs in the car) on the same day, we left on Saturday afternoon and pitched our tent in a nice spot just below the slopes of Creag nan Gabhar. It was a hot weekend and surprisingly, very few midges. We spent Saturday evening lazying in the front of the tent, and on Sunday morning we got up early to tackle our "biggie". From the very morning it looked like it was going to be a scorchio, so we packed in loads of water, sunscreen and wore trousers that could be turned into shorts.
Ready to go: Our route was the classic traverse for these two hills, up Carn Bhac first, then to BIM over some peat-haggy ground. At least the hot weather meant, bog and mud was reduced to minimum!

Track_BRAEMAR 05-06-16.gpx Open full screen  NB: Walkhighlands is not responsible for the accuracy of gpx files in users posts
The walk-in is on a very good track, wish it were closer to home, we would definitely bring bikes: 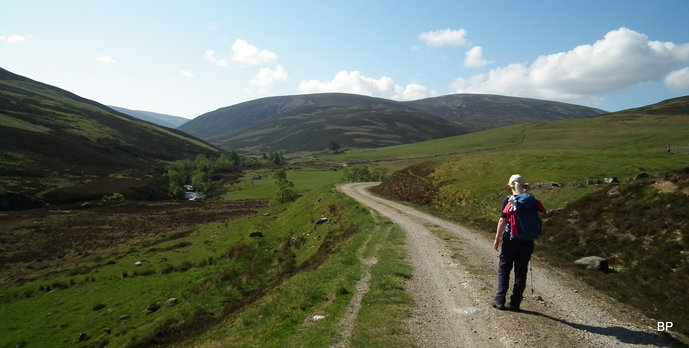 For almost 9 km, it was just the track, the river, heathery slopes around and blazing sun above. Yet it's a very charming glen. A few snaps from the walk in...
Looking back towards the Cairngorms, last remnants of snow on higher peaks: Creag an Fhuathais, a minor top of An Socach, dominates the view:

The first glimpse of "our" hills... Beinn Iutharn Mhor (more distant, to the left) and Carn Creagach, seen from the bridge about 1km before the ruins of Altanour: We passed Altanour, refilled bottles from a stream and re-applied sticky sunscreen. Thankfully, some cloud popped up above us and mercifully gifted us with a bit of shadow... It was still horribly humid though and I hoped we would avoid thunderstorms later on!
The track becomes less obvious past Altanour and at some point we just stroke uphill in NW direction, towards Carn Bhac. We had already unzipped the bottom halves of our trousers and now we had to suffer through some scratchy heather

albeit not for long, soon we came across a faint VT track and followed it for some time. Higher up, as we neared the col between Carn Bhac and Carn Creagach, the ground became more grassy and easier to walk.
View back to Altanour from the lower slopes of Carn Creagach:

On the col, the final slope to Carn Bhac behind me:

It was a sweaty experience already, and we still had BIM to do! As we simply could not push too fast in this sauna, we slowed down and took every opportunity to snap photos and videos. These hills are not the best, the most breathtaking viewpoints due to their rollin-rollin nature and gentle, round shapes, but they still posses some quiet charm - the whisper of the wilderness in your ears

When we reached the summit, the cloud became more overcast, but even so, the sauna conditions didn't improve by much The best views from Carn Bhac are to the north, towards the mighty Cairngorms:

The summit area has two cairns, the smaller one, according to Kevin's GPS, is marginally higher. The bigger one makes for a good shelter (not that there was much wind to shelter from!)

Lochnagar group to the east:

Beinn a'Ghlo to the south:

We sat by the bigger cairn and helped ourselves to sandwiches and water (too hot for tea, obviously!!!). Another walker came and greeted us, but he was young and fit and decided to go on to BIM immediately, leaving us to our lunch... or maybe he just didn't fancy the midges on the summit!

Yes, the wee %^&*$s really annoyed us. It was better to be on the move, even at slow pace. My knees felt fine so far. The only problem was how to pose for pictures without the scar showing too much

The traverse from Bhac to Iutharn goes over some nasty-looking peathags, basically a sea of them! We were lucky to pick a dry period of weather. The hags were all bone dry, so we simply walked through them. In wet conditions this part of the route could give you a real headache though.

The final slope leading to Beinn Iutharn Mhor didn't seem friendly at all! Steep, steep, with some awfully-looking scree:

Thankfully, most of the scree can be avoided and we climbed on the grass, hard work in that heat... I stopped half way up to admire violets at my feet... Once on the summit ridge, reaching the summit is a formality. Cloud was now quite thick and I was seriously worried about storms... 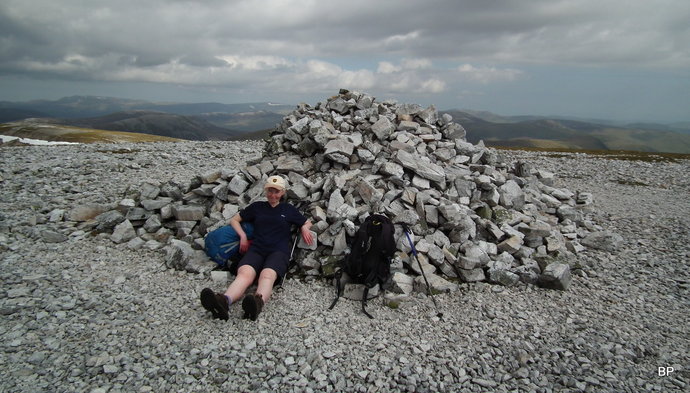 The Cairngorms from BIM:

To the south, weather still held. Carn an Righ (foreground) and Beinn a'Ghlo basked in sunshine:

Panoramic shots from the summit:

As we began the long walk back to Inverey, the sun came out again and temperature jumped up immediately. I was glad to have avoided storms this time, even if we got all sticky with sunscreen.
Nice day:

There is a cairn at the opposite end of the ridge, from here steeper descent begins. I was glad we picked a dry day to visit this area, at least we didn't have to worry about slippery grass on steep slopes. The Cairngorms behind me: It's a long, long way back to Inverey... Deja vu? I was humming the same song returning from Beinn Bhrotain

From above, Glen Ey looks as from the plane: We located a zig-zagging path which gives easy descent on steeper sections. Once down on flatter ground, the path became indistinct and we entered another peat-haggy area, but with peat hags dry it was an easy job. We followed the NE shoulder all the way to the start of a track (it leads to grouse butts scattered all over this shoulder). The track descends to a small bridge: Now, all we had left was the painful walk back to the starting point. Painful, because by now, both of us suffered from blisters, Kevin more than me as he was wearing thick socks and simply overcooked his feet. At that moment I wished we had bikes...
By the time we returned to the car, we were too tired to even think about driving back home, so we decided to stay and camp for another night.
I had a cunning plan of climbing some Corbetts the day after, but as we woke in the morning, Kevin's feet were still too swollen and blistered to force him uphill

). Luckily, after day's rest, my husband's condition improved and on Tuesday we tackled a substantial bike-hike trek to a certain boggy mountain. We encountered little bog, but had a close encounter with a thunderstorm. TR coming soon

Good report BP, seems blisters were the name of the game down there last week

mamoset wrote:Good report BP, seems blisters were the name of the game down there last week

Thanks, did my best, but I think you had a better day for nicer photos (how blue sky makes the difference!). Blisters have healed since and, funny, Kevin used them as an excuse to get a new pair of boots

Now to the next story, a bit more hairy...

Excellent report. I climbed Carn Bhac a few days after you did. I'm particularly pleased to see the track of your route off Beinn lutharn Mhor down to Altanour Lodge ruin - it will be useful when I have a go at BLM myself.

I thought Glen very beautiful, you got a good photo descending BLM