Beinn Achaladair and Beinn a' Chreachain

Beinn Achaladair and Beinn a' Chreachain

Beinn Achaladair.gpx Open full screen  NB: Walkhighlands is not responsible for the accuracy of gpx files in users posts

This is a long walk. Even longer than described in the WH route description as the car park is no longer up by Achallader Farm where it is shown on the OS map, but just off the A82. The forecast for Saturday suggested a brief window of good weather, so I wasn't surprised to see others had the same idea as me...head for the hills. The car park was already busy when I pulled up at about 8.30 and the sun was shining... 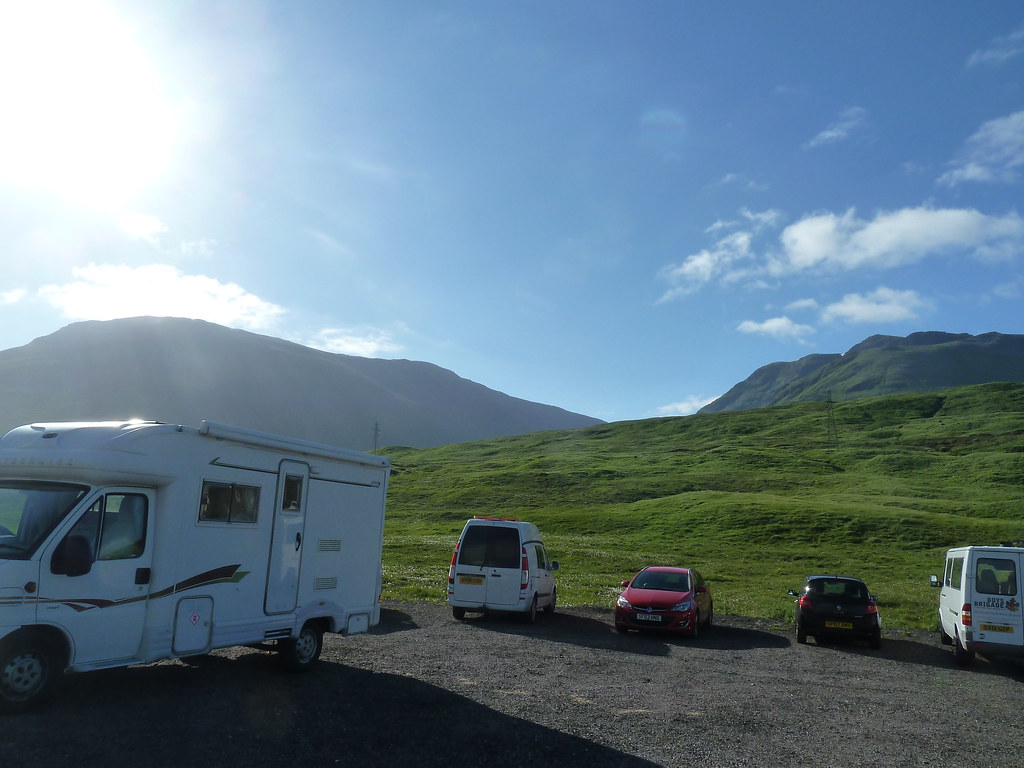 I ended up doing this route anti-clockwise. That's not what I'd meant to do, but just after leaving the car park I followed the sign "Path to Hill" and by the time I realised what I'd done I couldn't be bothered going back. The path leads to a bridge over the railway line and then begins to climb gradually alongside the Allt Coire Achaladair. This is a very pleasant stretch, with a good path and your immediate object clear in front of you...the bealach between Beinn an Dothaidh on the right and Beinn Achaladair on the left. 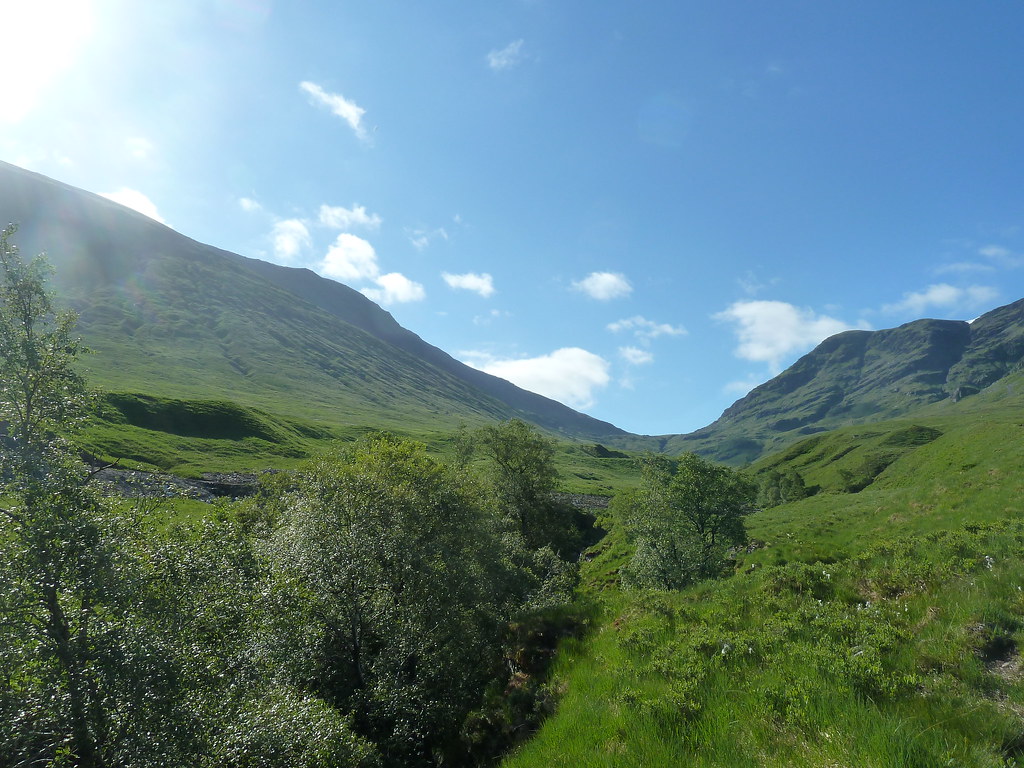 As you climb higher the path crosses the stream once or twice to avoid some rougher going, but it really is a very pleasant route up into the coire, with Beinn an Dothaidh looking very handsome off to the right. 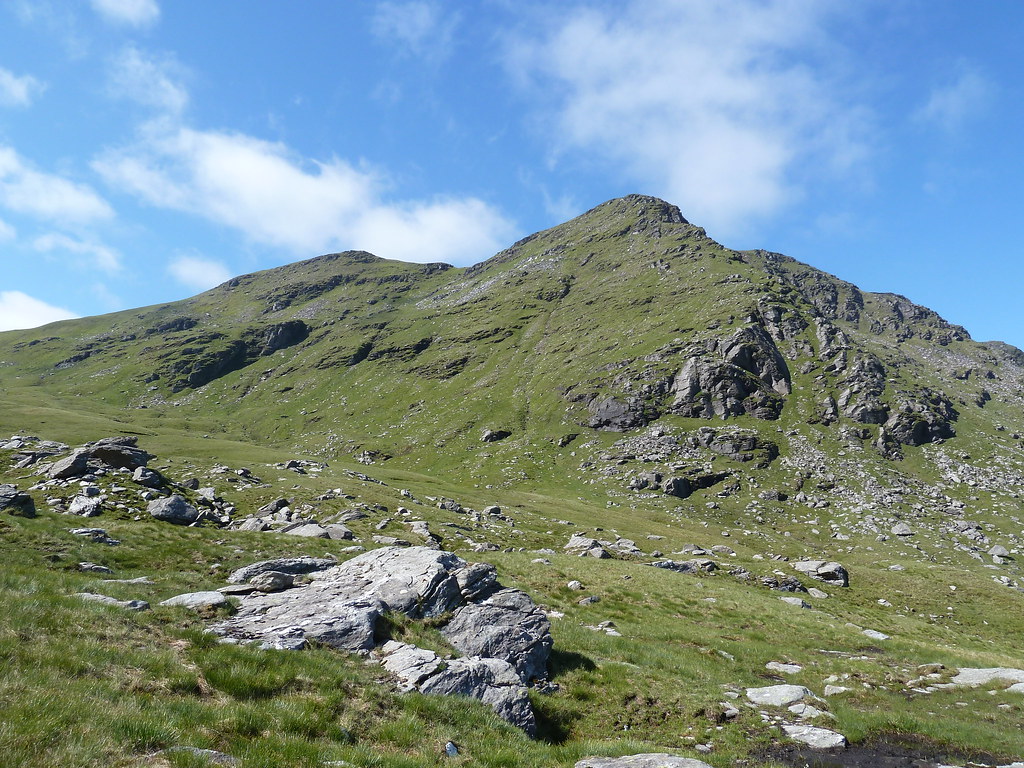 At some points it looks as if you should be able to head off to the left and start climbing the flanks of Beinn Achaladair's south ridge...but I resisted the temptation and stuck to the path, eventually arriving at the bealach after about two hours walking from the car park. 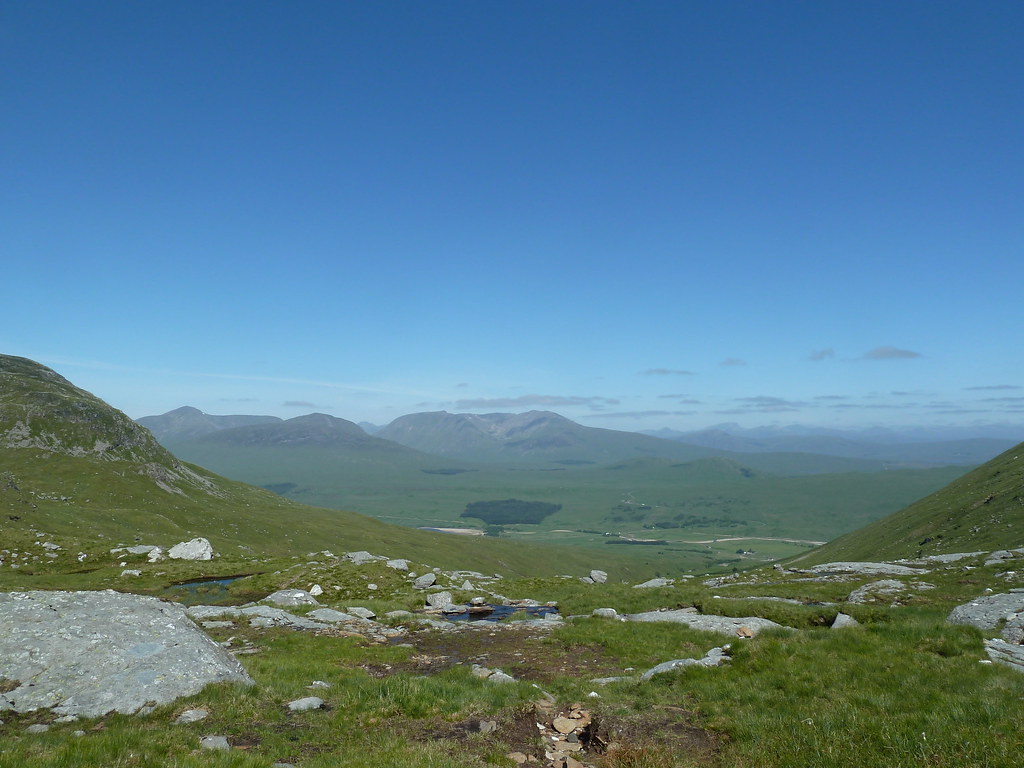 Looking north from the bealach

From here you kind of double-back on yourself, climbing the south ridge of Beinn Achaladair in roughly the direction you've just come. 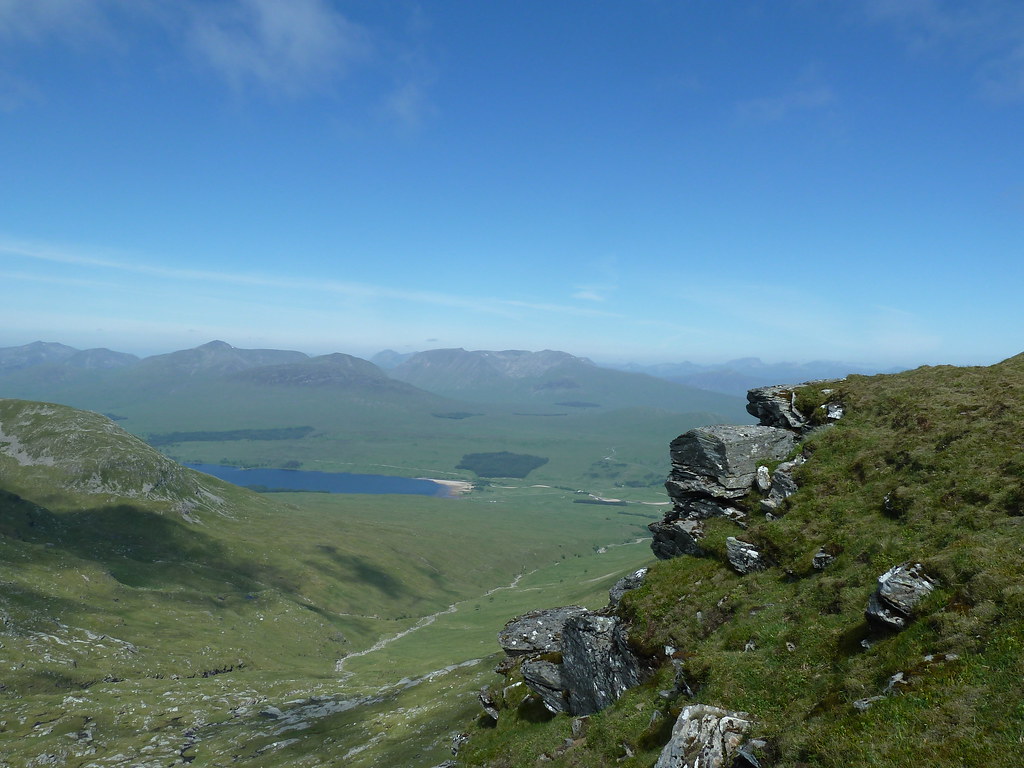 Looking back down Coire Achalidair, with Loch Tulla behind

Again there is a clear path, but you don't even need that. The way ahead is obvious and the ground underneath is comprised of short, springy turf that is a pleasure to walk on. Half way up the ridge I came across a wee campsite...not sure if I would choose to camp literally on the path, but I'm no camper, so what do I know? 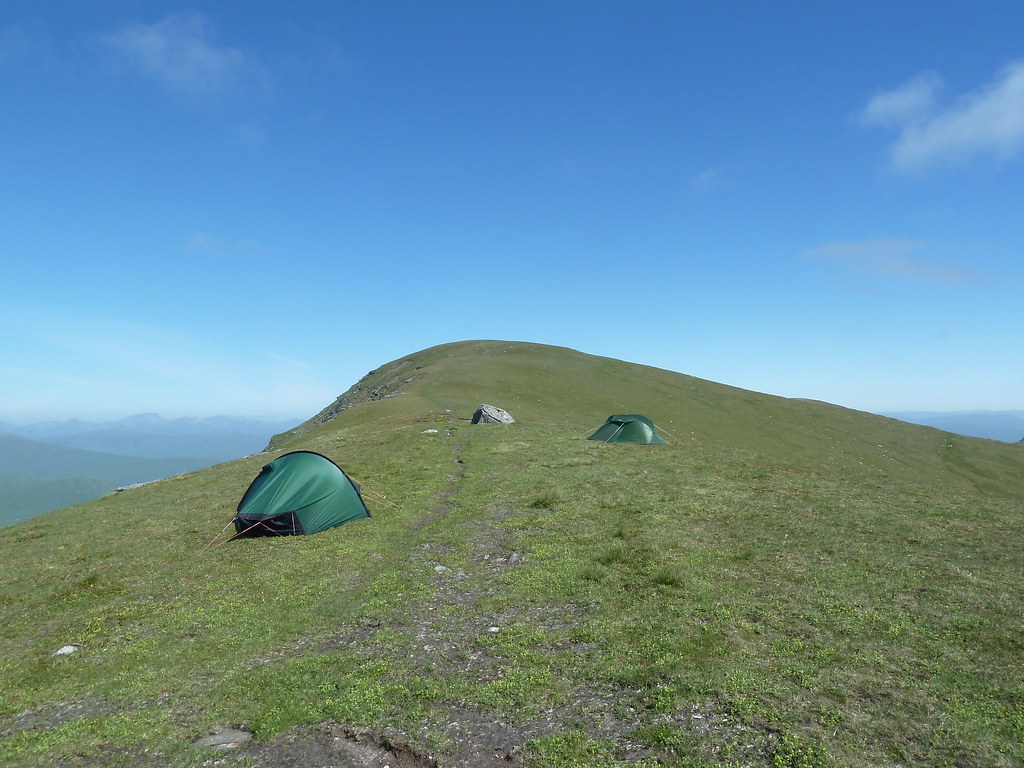 It's about an hours walk from the bealach to the summit, and around halfway there's a small summit marked on the map at 1002m, and on the ground with a very modest cairn. From here you can see the day's two munros ahead. 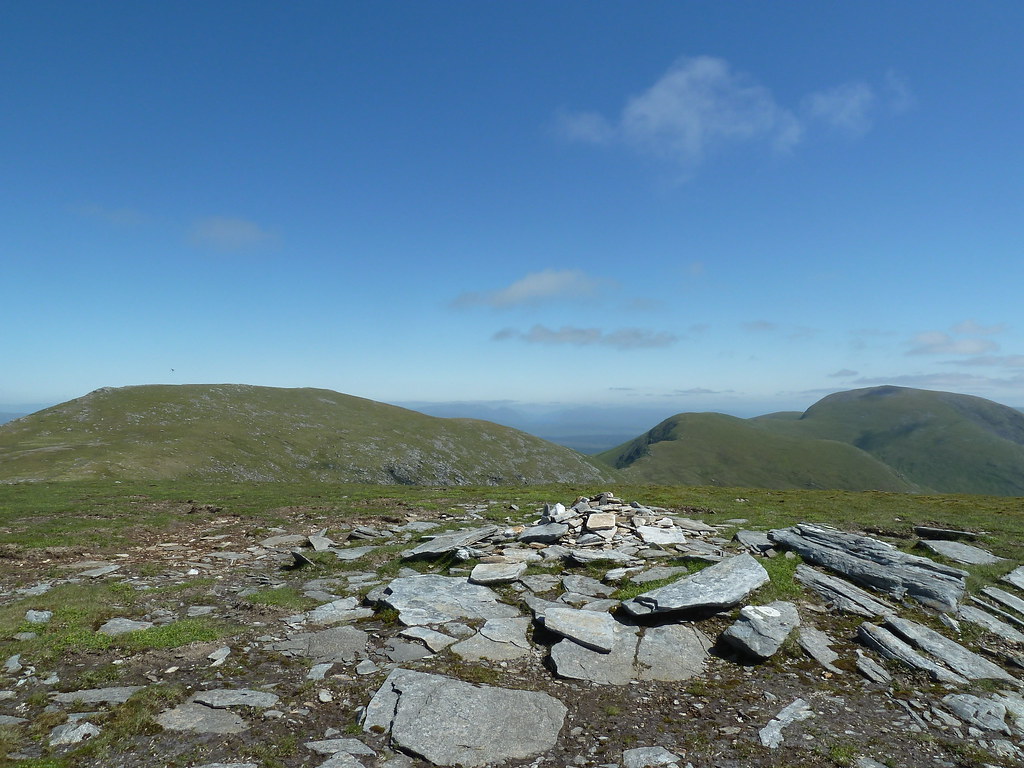 1002m top with Beinn Achaladair summit and Beinn a' Chreachain ahead

From this top, there is a small descent and then a steady pull up to the summit. The path takes you close to the western crags and gives great views across Rannoch Moor. 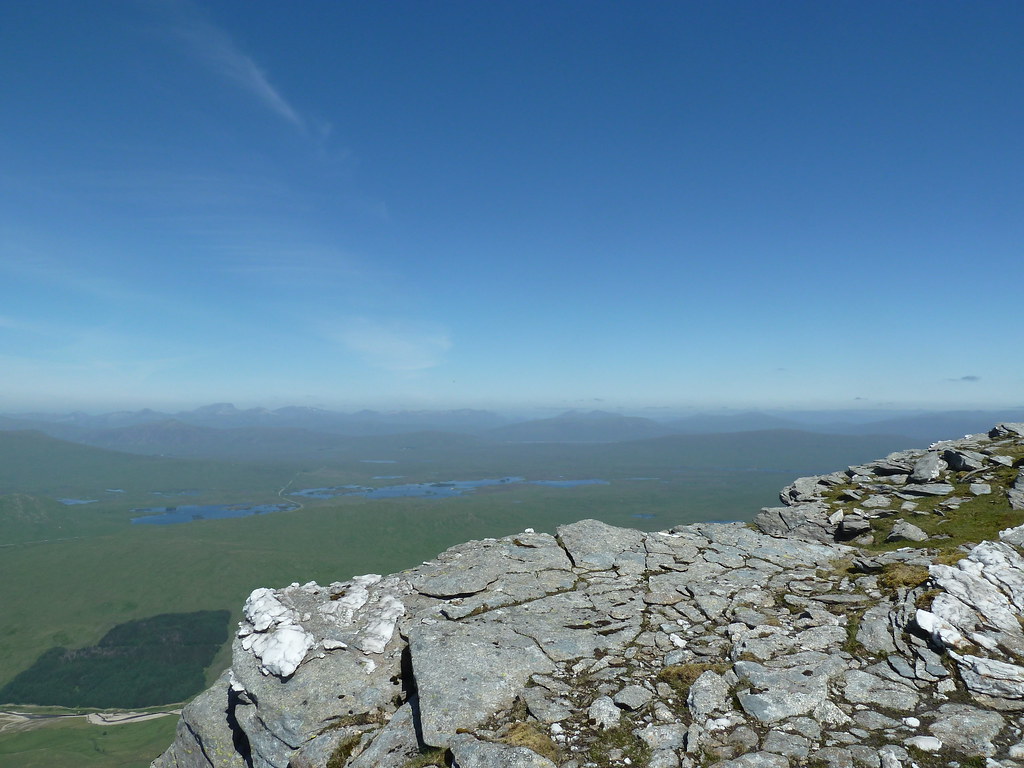 So after three and a bit hours from the start I eventually reached the summit of Beinn Achaladair. The sun was shining, there wasn't a breath of wind, and there were mountain hares bouncing about all over hill. I just about managed to catch one...not the best photo but I was proud I got it at all since I couldn't see the screen of my camera for the sun! 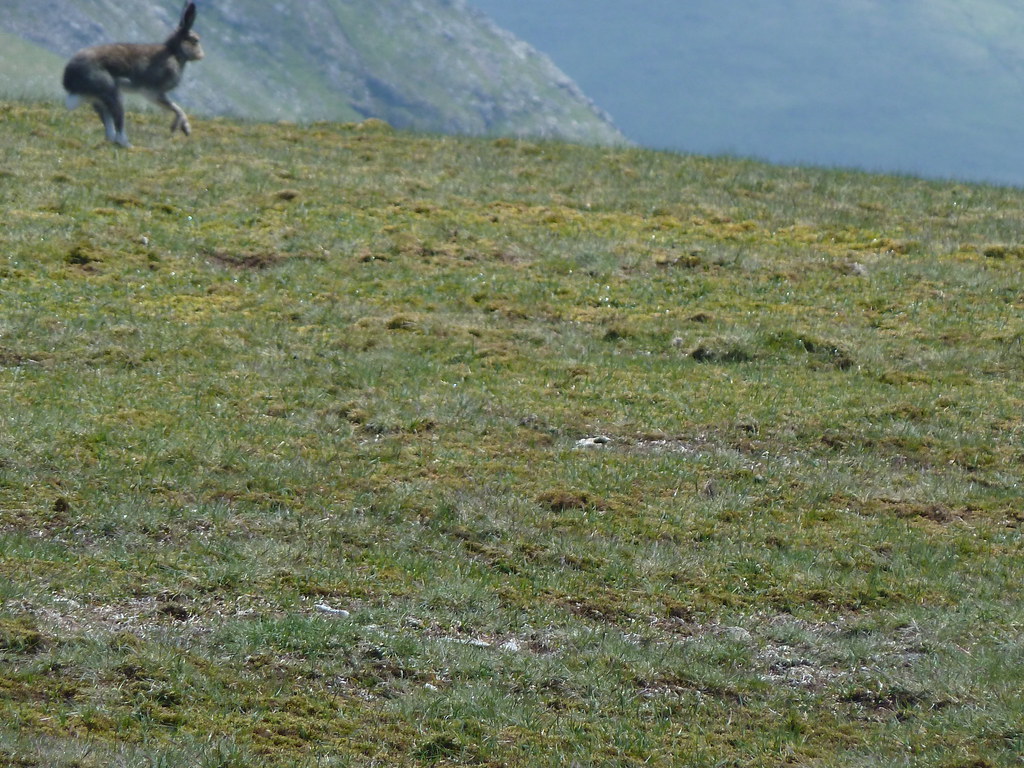 The summit - really a long ridge - is a lovely spot to linger for lunch, so that's just what I did. Once refreshed I began the descent with the route to Beinn a' Chreachain clear ahead. The craggy north face of the hill looks really impressive from this vantage point. 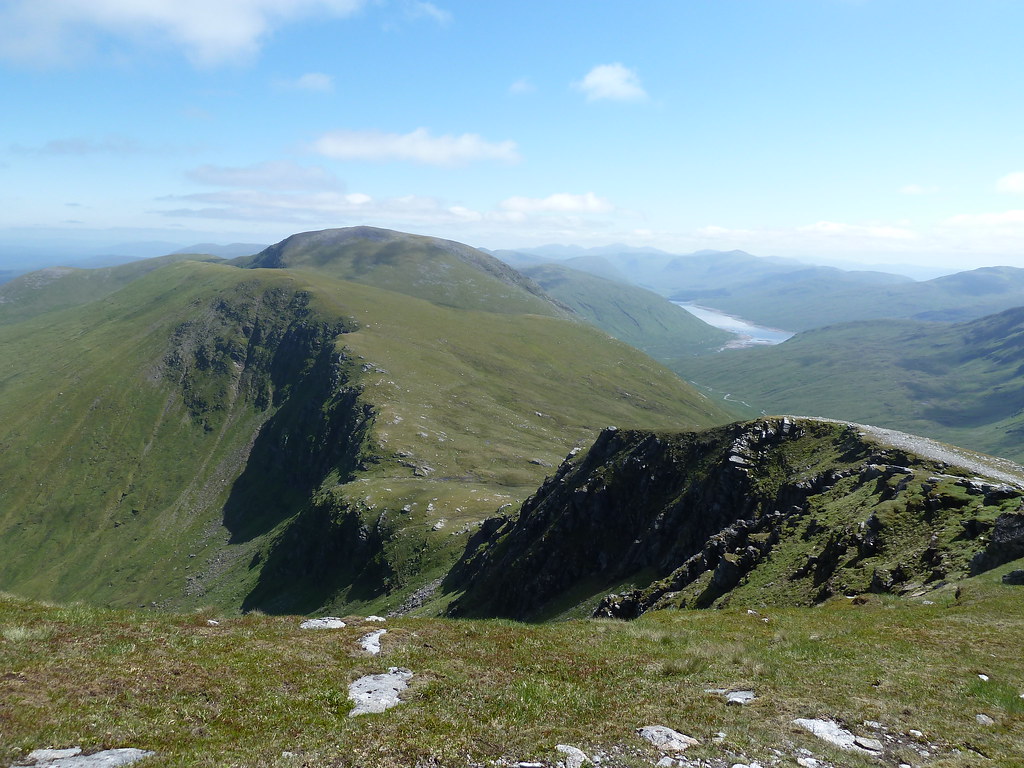 Looking across to Beinn a' Chreachain

The descent of Beinn Achaladair starts off easy enough, but it soon steepens sharply and this is possibly the only disadvantage of doing the route this way...I imagine this stretch would be a lot easier going up than going down. But it doesn't last long and you are soon on more level ground. Looking back, Beinn Achaladair looks quite impressive. 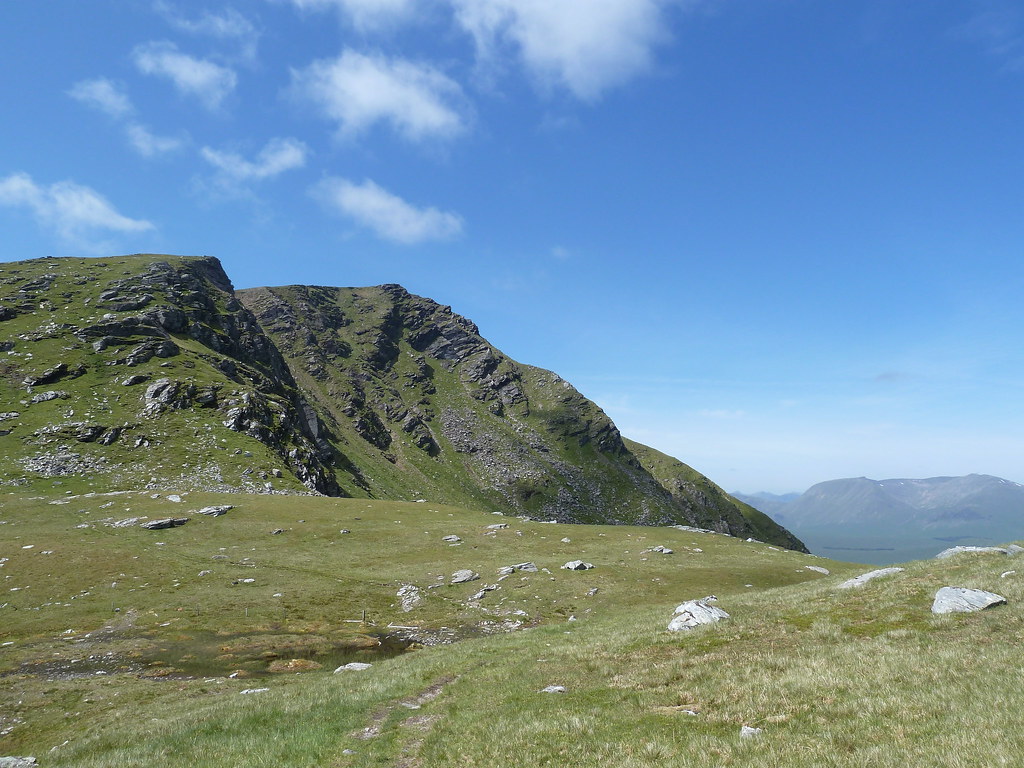 Looking back at Beinn Achaladair

There's a small top to negotiate on the way to the next summit, but nothing serious. It's mostly a fairly lengthy but enjoyable trudge for about an hour and a half to the top of Beinn a' Chreachain. The summit is clearly marked with a large cairn, and on a clear day the views are fabulous. 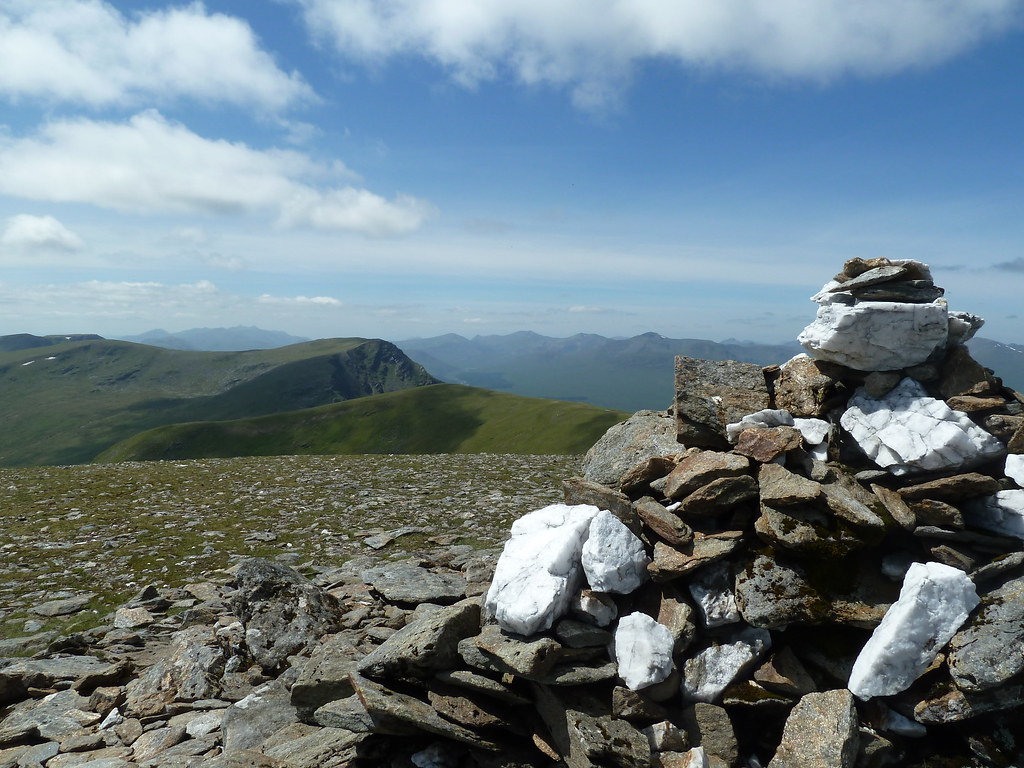 Summit cairn of Beinn a' Chreachain, looking over to Beinn Achaladair 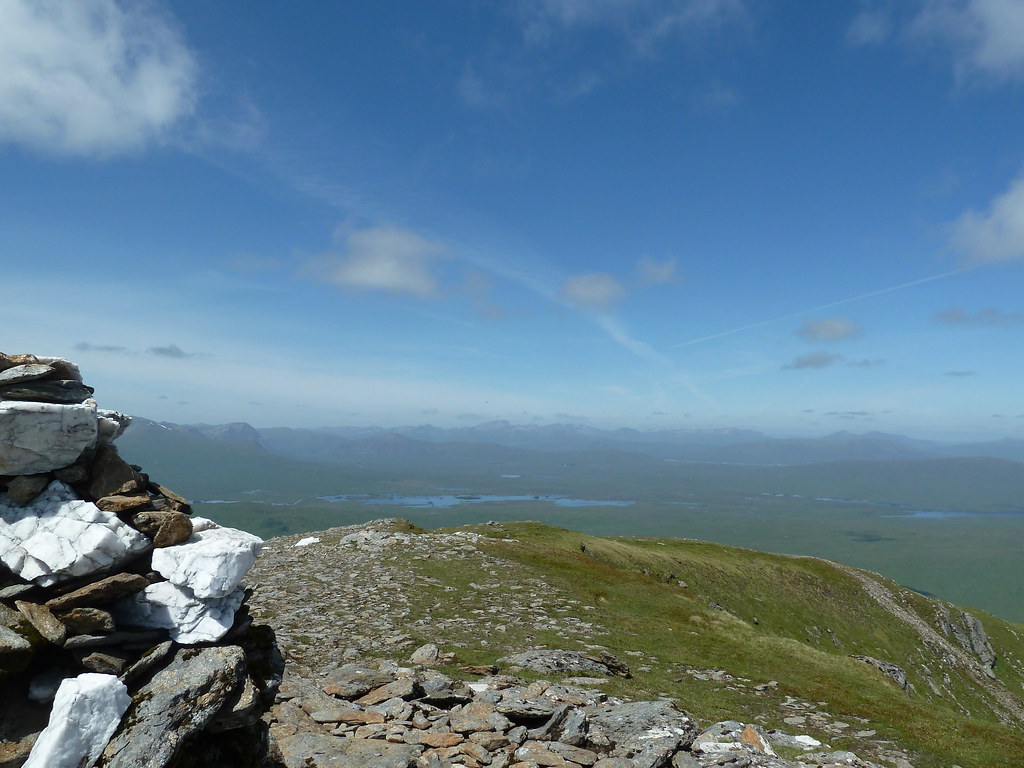 Rannoch Moor, with Nevis range in the distance

The descent is again pretty straightforward on an obvious path down the NE ridge of the hill. Once you reach the low point of the ridge just head off to the left down the grassy slopes and head for the stream descending from the magnificent Lochan a' Chreachain. 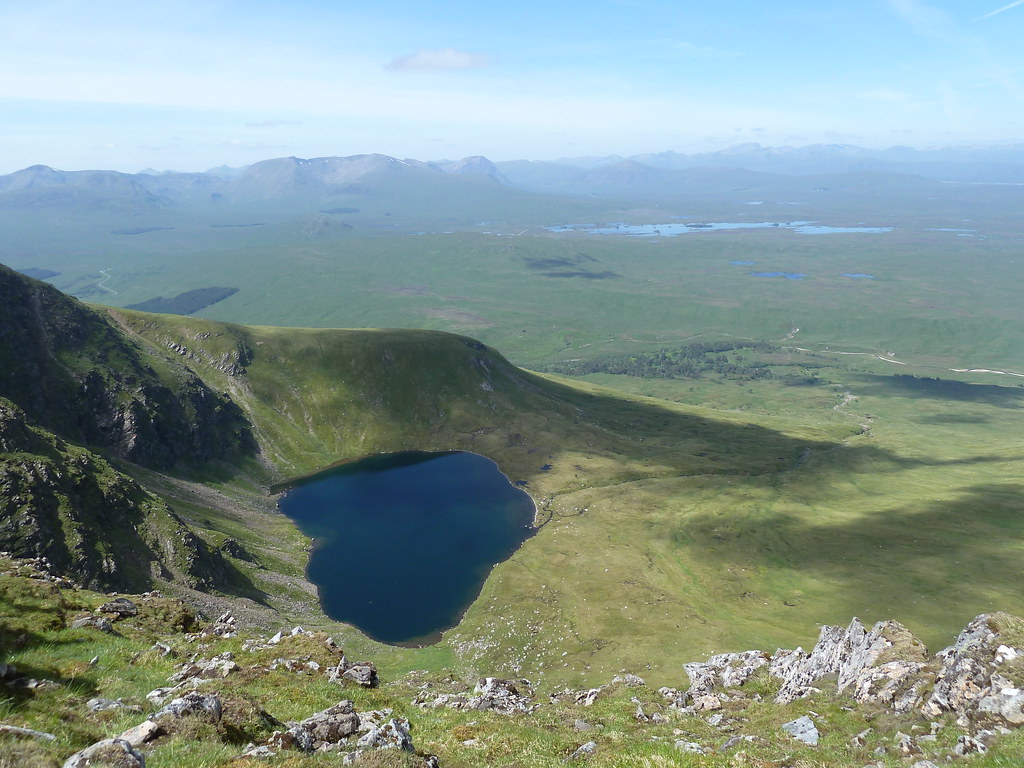 The Allt Coire an Lochain descends from the lochan. Once you reach it, cross over to the west bank and you should pick up a path that will lead you all the way down the hill and under the railway. Don't be tempted to stray off the path and over any stiles...I was told by a few folks going the other way round that this would be a mistake! Anyway, the path is great and the stream is beautiful and full of life - dippers, dragonflies, warblers, trees clinging precipitously to the gorge...it was lovely even after a gruelling day.

If you stick to the path you will eventually reach a small, low tunnel under the railway line. 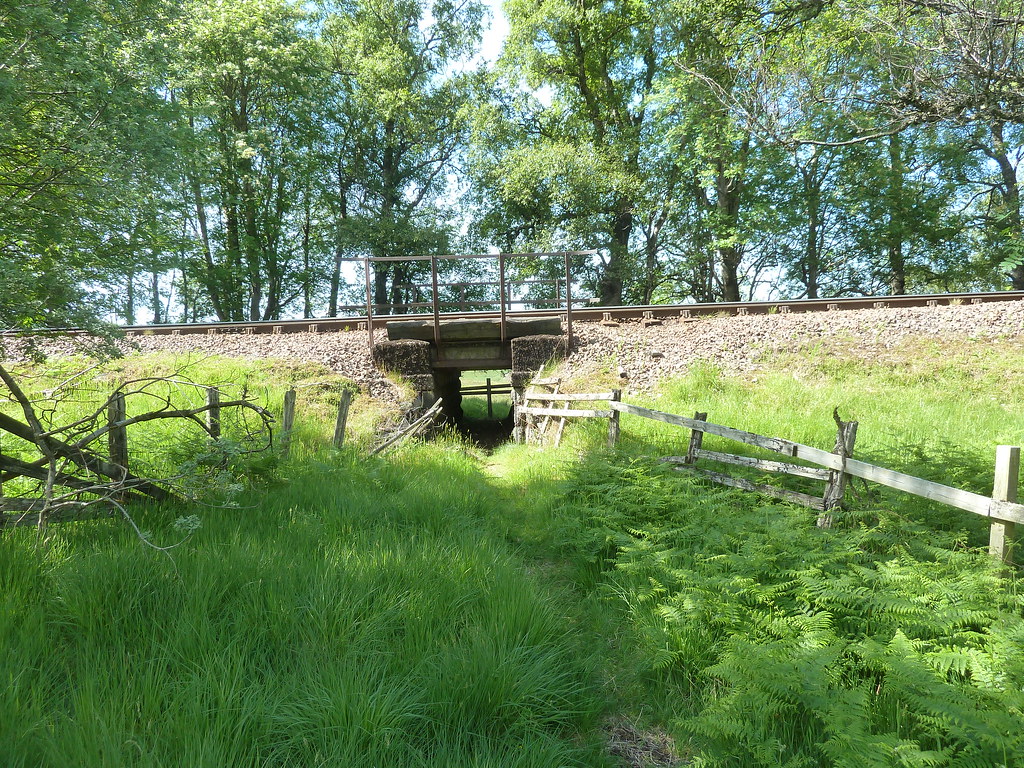 Tunnel under the railway

The path disappears after this...or at least if it doesn't then I lost it! So I just headed for the Water of Tulla and looked for a crossing point. It's quite wide so it took a while to find a configuration of stones I was happy with, but I made it across and then picked up the farm track to take me back to the car park. This bit is quite tedious and took me a good 90 minutes. Not what you want, but if a walk has to have a long, flat, boring section then I think I'd rather have it at the end of the day rather than the start...others may disagree!. Anyway, at least you can glance to your left occasionally and take in what you've just achieved. 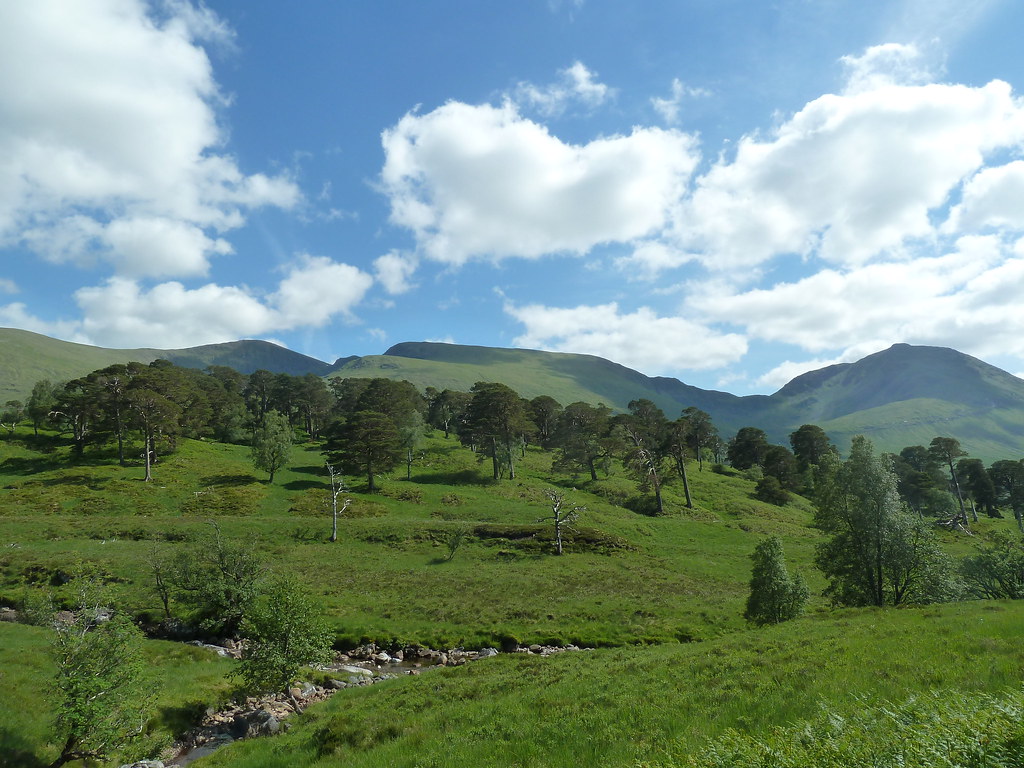 So, an eight hour plus day, but a very enjoyable one. These hills have real character and maybe deserve to be better known.