There was a time I thought the eastern Fannaichs were going to be awkward, since neither the SMC nor Cameron McNeish suggest in their Munro guides a route for including all four in a day. It wasn't until I started perusing the Walkhighlands site that I learned of the route described here - a walk of surprisingly reasonable distance and ascent. It was just what I was looking for to complete the Fannaichs and round off my trip to Ullapool in May. So, thanks to Walkhighlands!

In deference to Black Panther's fine report of the same walk from not so long ago, I'll keep this one brief. In any case it was a pretty uneventful hike - just a great day's hillwalking!

Set off from the small car park near Torrandhu Bridge at 5.35am. Weather was overcast with cloud covering the tops, but looked slightly more promising than it had the previous day when I did Am Faochagach. Followed track past the weather station and alongside the meandering burn, heading for Beinn Liath Mhor Fannaich. 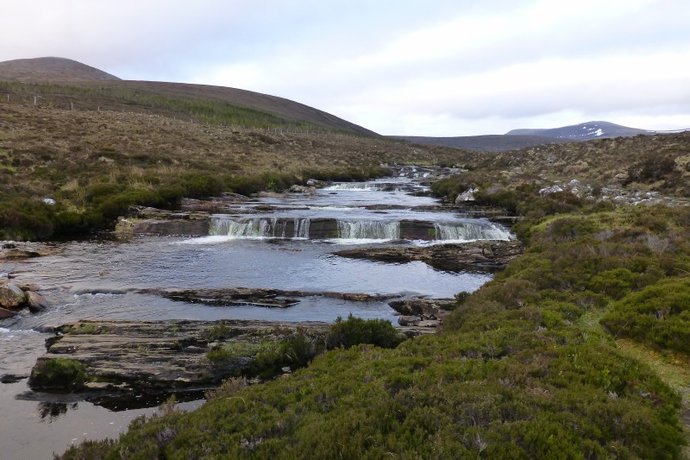 Path follows the Abhainn an Torrain Dubh to begin

Keeping to the right bank of the burn you come to the confluence of two burns at which point follow the Allt an' Loch Sgeirich for a kilometre or so until you can cross it and strike up the easy but boggy eastern slopes of Creag Dubh Fannaich. Once on the ridge a faint path emerges leading up to the summit and on to the first Munro of the day, Beinn Liath Mhor Fannaich. 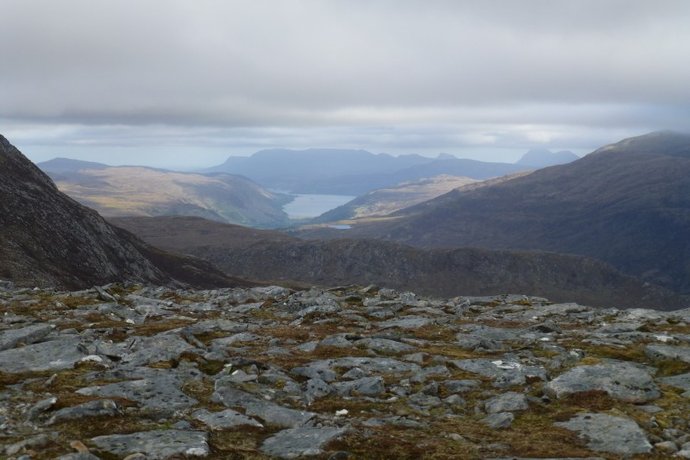 Loch Broom with the Coigach hills behind 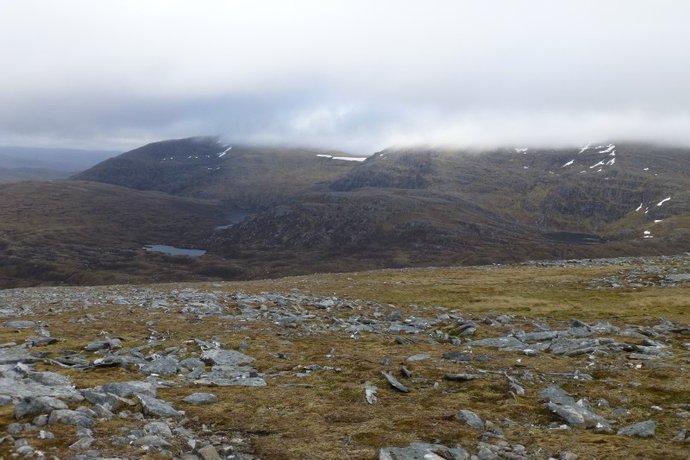 The clag was down on BLMF so I didn't bother taking any photos until out of it down the other side. The steep and rough descent finds a good stalker's path at the edge of the corrie on the right and leads easily down to the Bealach at the foot of Sgurr Mor. There's a clear path to follow from there. 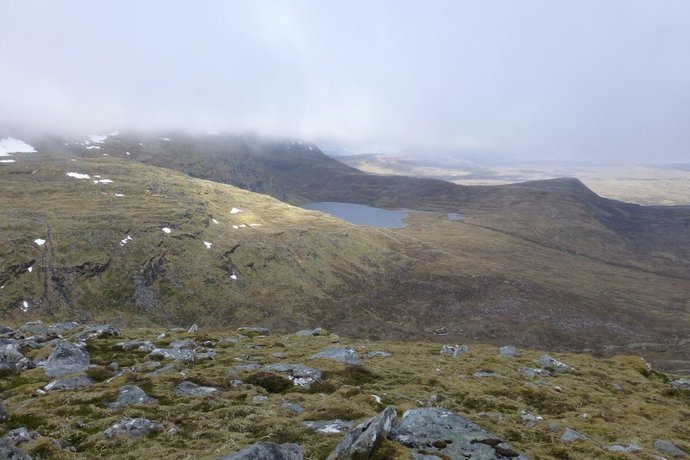 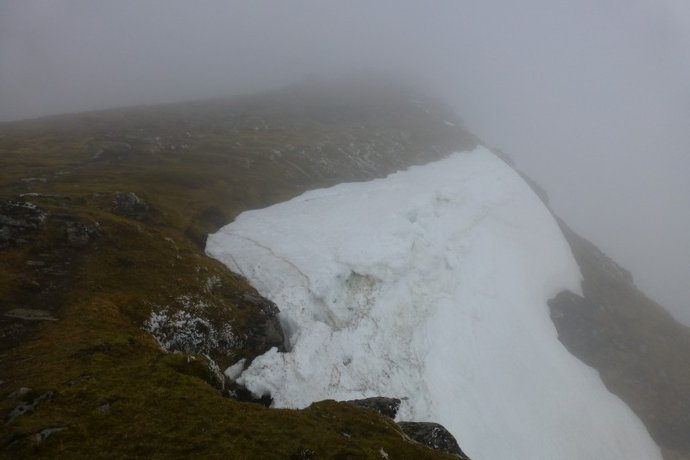 On the way up Sgurr Mor, back in the clag

Reached summit of Sgurr Mor at 9.50am. Sat down for food break. Clag was down but the sun was almost coming through at times. A mountain hare sauntered past only a few yards away, quite slowly but still too quickly for me to get a photo of him. I waited quite a while, torn between the hope that the mist would clear and the need to get going. The mist persisted so the latter won. 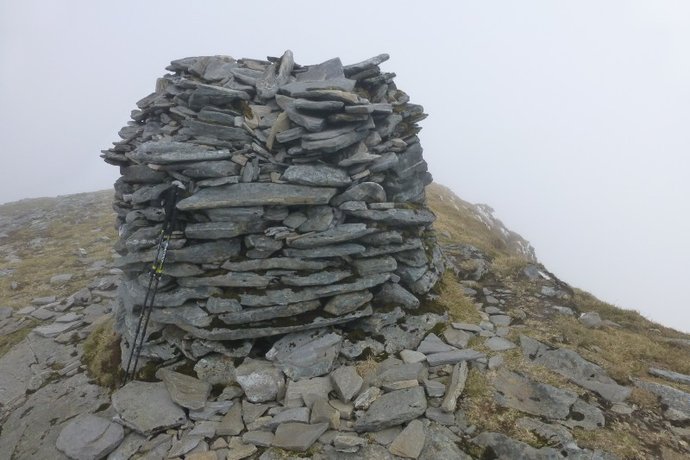 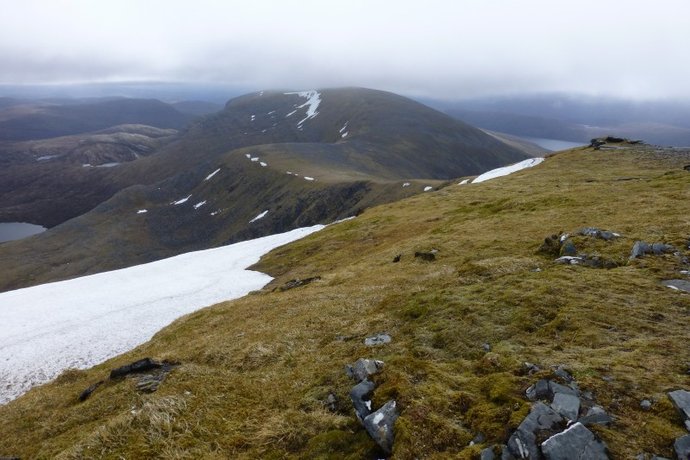 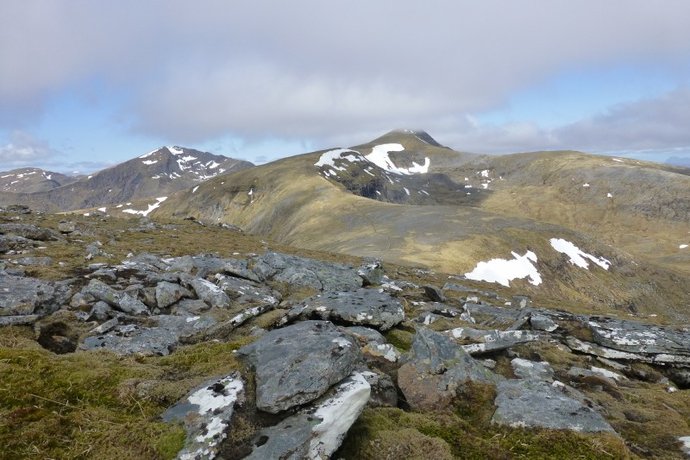 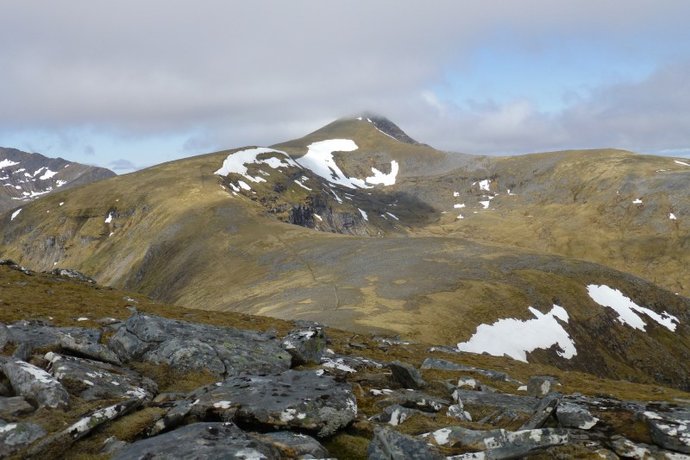 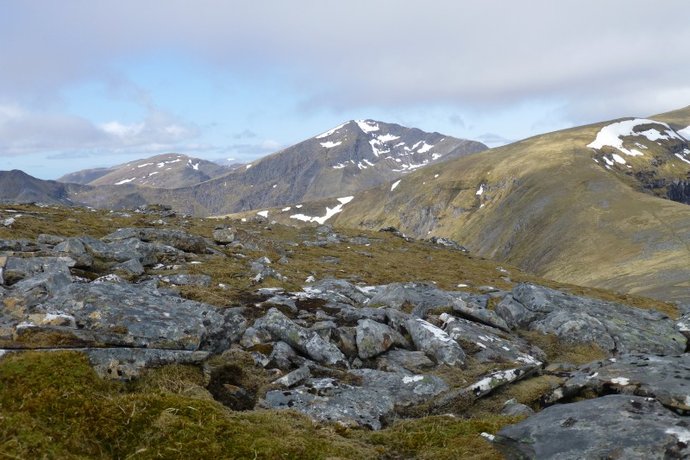 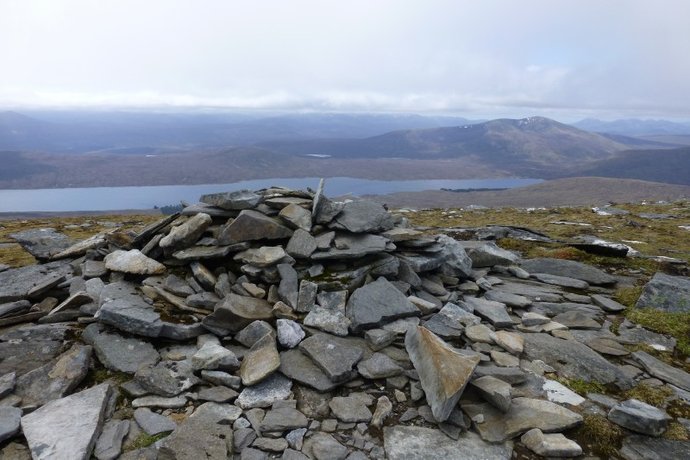 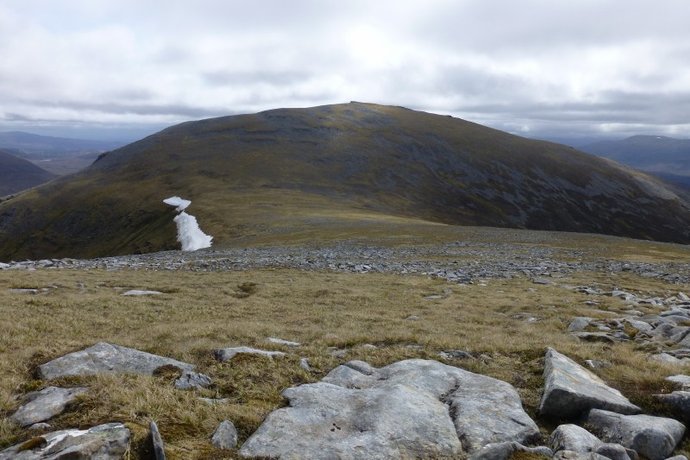 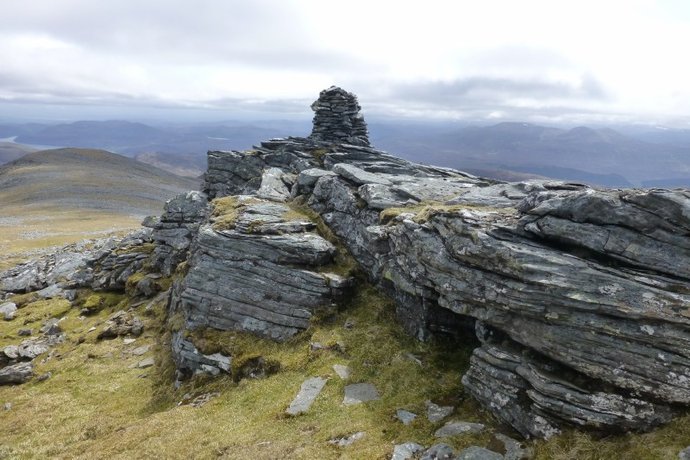 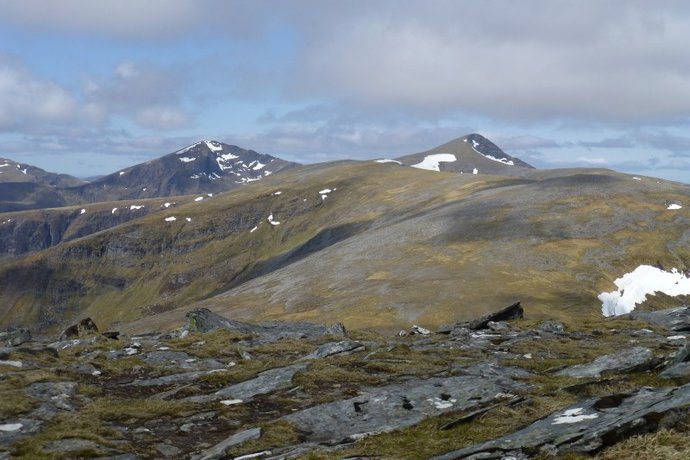 Sgurr nan Clach Geala and Sgurr Mor from An Coileachan 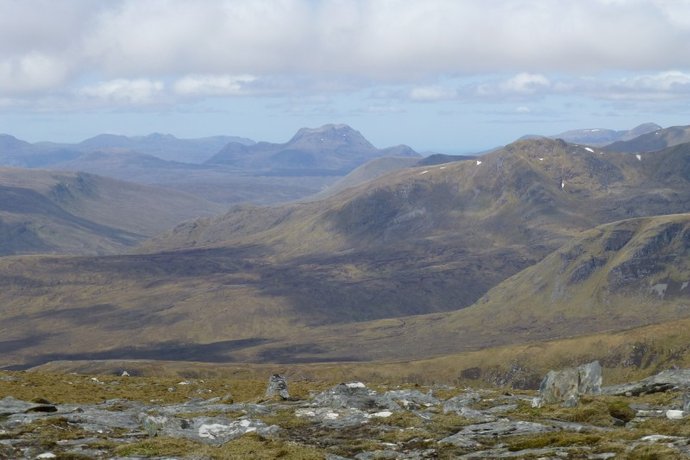 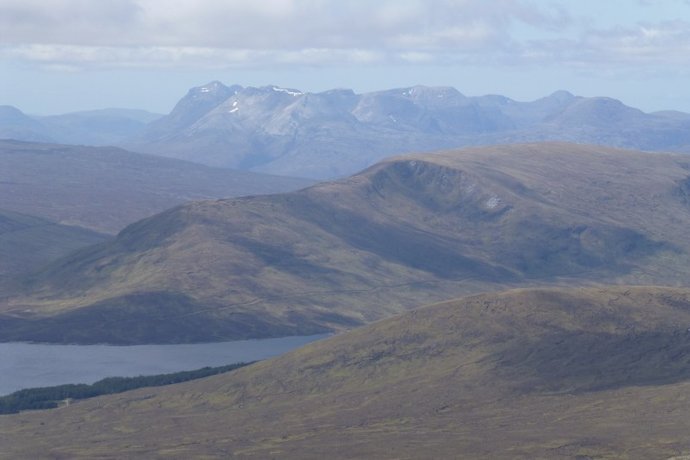 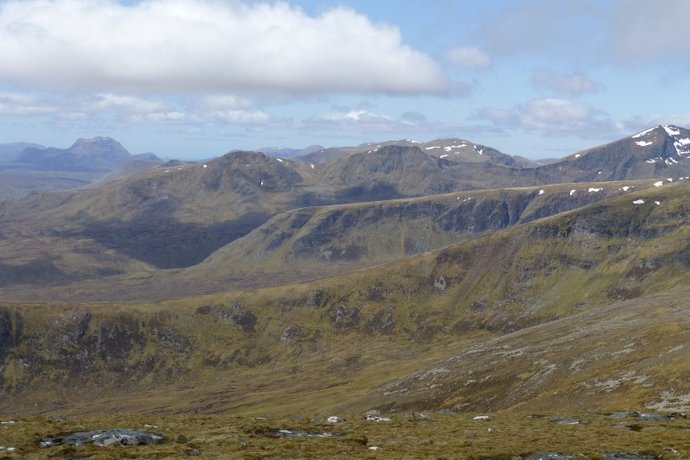 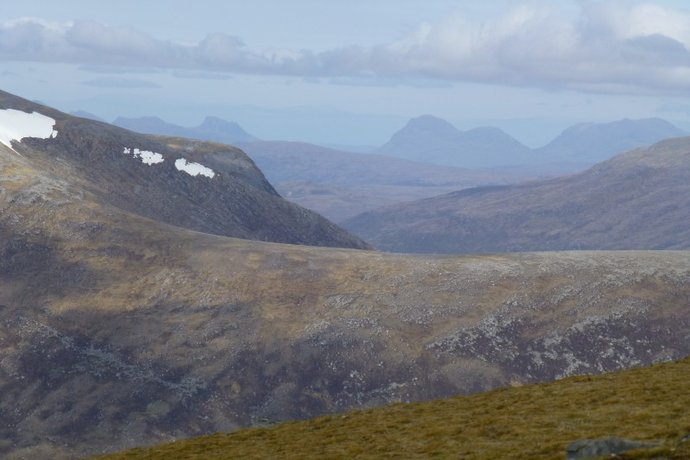 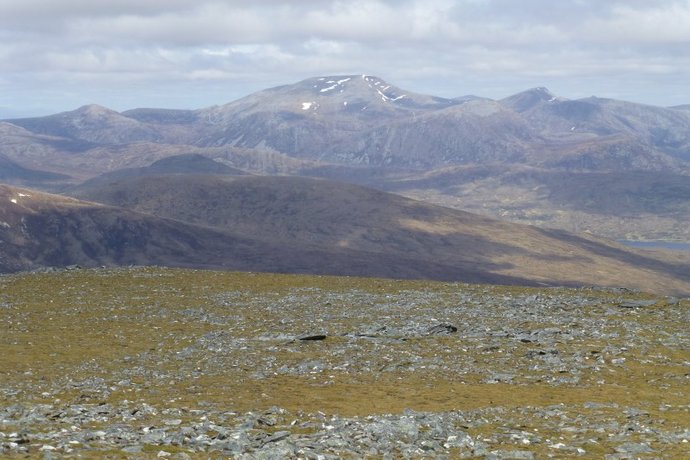 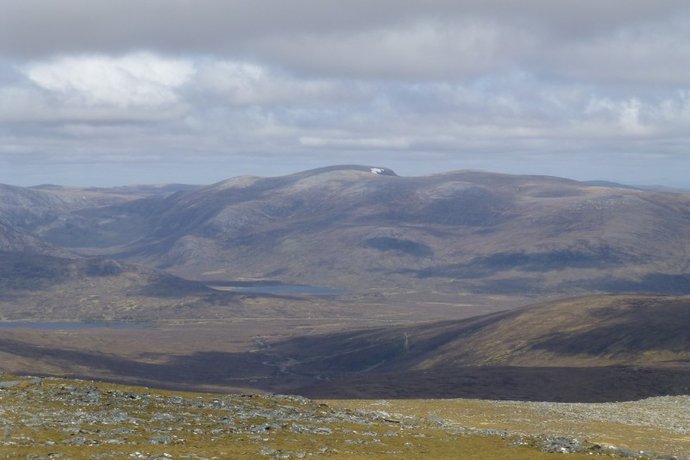 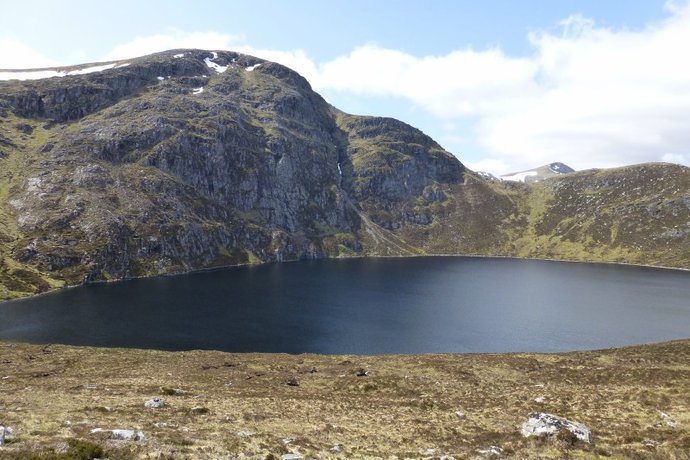 The walk back from A' Coileachan did seem a long way, but was easy going for the most part. A footbridge over the Abhainn a' Ghiubhais Li came in handy. 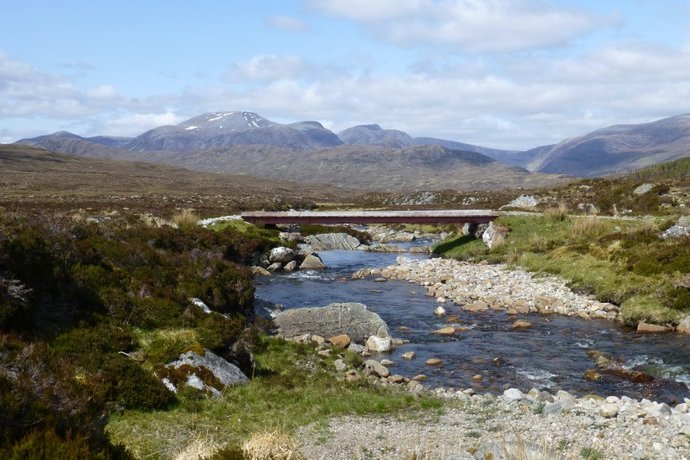 Footbridge near the forestry plantations, Beinn Dearg in background

Took the alternative track up through the plantations to vary the route and this actually gave some fine views. The sun was hot and it felt like summer had arrived.

I'd be heading home next day and was well pleased with my tally of 11 Munros over 4 days; but the real satisfaction had come from the quality of the walks themselves, which will live in my memory for a long time to come.

malky_c wrote:Made the mistake of not leaving Inverness yesterday - looks like it turned out rather nice out west

Sorry to have confused you - I got a bit behind with this one!

ancancha wrote:As you say a very pleasant hike around in the picturesque highlands with some nice photos

Brings back memories from our trip last year. There was more snow in the corries but otherwise, just as I remembered

BlackPanther wrote:Brings back memories from our trip last year. There was more snow in the corries but otherwise, just as I remembered

Thanks for that BP

I see now your report on this walk was from April last year - somehow I got the idea it was from this year (so that's myself as well as malky_c I've managed to confuse!)

I probably got it mixed up with your report on the Beinn Dearg four, which I was also very interested to read.

Anyway, I'm glad my report brought back memories for you; it certainly is a spectacular ridge and it would indeed have been a shame to have missed those views - though I do wish the clag had lifted off Sgurr Mor when I was there!

A trip I'm looking forward to doing next year. Thanks for whetting my appetite! That ridge looks very tasty.

Silverhill wrote:A trip I'm looking forward to doing next year. Thanks for whetting my appetite! That ridge looks very tasty.

Yes it's a lovely walk Silverhill, mostly quite gentle with just a little spice added by the fine peak of Sgurr Mor. Hope you get a good day for it!