The 18th June would have been my dad's 94th birthday and it was his love of the Highlands that rubbed off on me and made me want to climb the hills the way he did. So I was delighted to be able to head out with Roger and Liz (aka Huff n Puff) on 18th to fulfil a long awaited date with Seana Bhraigh. I discovered later it was Liz's birthday the next day - so a double reason it was special.

We met in the Forestry car park at Contin so I could cadge a lift with them to the usual spot at Inverlael. Can't remember how many times I've walked in over the years to this great bunch of hills but it's left so many happy memories. After a short section of zig zags the track goes through a deer fence and levels out into a stalker's path that continues to climb up the spur of Druim na Saobhaidhe, giving good views back to An Teallach and the Fannichs. The path passes through a section of peat hags and leads to the Allt Gleann a' Mhadaidh which in the recent dry conditions posed no difficulty to cross. Our route took us over the lower northern slopes of Eididh nan Clach Geala before arriving at a second burn, just below the first of several lochans, with a cairn showing the easiest spot to cross on stepping stones. 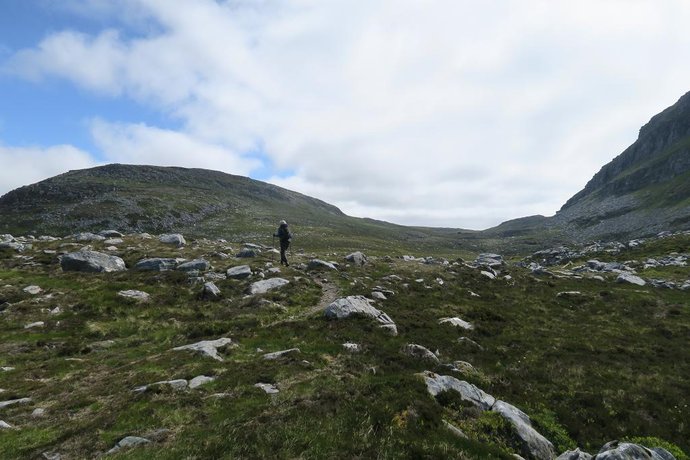 The path then steepens in an easterly direction up a high glen before appearing to fizzle out at a fairly prominent cairn. Roger and the dogs were ahead at this point and because the path seemed to have petered out we weren't sure which way they had gone. Had we continued in the same direction we would have picked up a line of small cairns and an occasional path leading to an easy way down the craggy step we had to negotiate but we didn't know that until we found it on the return! We looked at the map and compass and walked over an uneven pathless area in the direction we thought we needed to go.

At this point we had temporarily lost Roger and the dogs Once we were reunited we walked towards the rocky step obstacle we had to negotiate to get down to the flat area between where we were and the summit plateau of Seana Bhraigh. I knew from WH we were looking for a boggy gully and I also knew some WH members didn't like the look of said boggy gully and had gone further to the east to get down an easier way.

View north from above the line of crags In the end, to avoid crossing what might have been a wide expanse of bogginess we moved along the top of the line of crags further west and found a steep but drier way down than the boggy gully looked to have been. From there we quickly ascended the headwall above the impressive cliffs of Cadha Dearg and continued round the rim until we picked up the path heading up on to the Seana Bhraigh plateau. Once we'd gained a little height we stopped for food - quite some time since we'd left Inverlael at 8.30! West to An Teallach The dot is Roger heading for the summit White quartzite rocks and cliffs of An Sgurr on Creag an Duine, the fin of Seana Bhraigh visible for miles around Sheer 1300ft drop to the crater of Loch Luchd Choire, alarmingly close to the summit cairn Zoomed to An Teallach While we were sitting in the summit windshelter discussing the upcoming referendum a large shape suddenly appeared from the cliff below and soared away from us. I wasn't quick enough with the camera so my photos aren't the clearest but I sent them to my bird expert friend who said it looks like a second or third year White Tailed Eagle - with broad wings and shortish tail and hasn't yet developed the completely white tail and lighter head colouring of the adult. I should add the photo he was commenting on wasn't the one I've posted - it was taken at a different angle and is more blurry but shows more of the top side of the bird. He or she may have been eyeing up Biggles and Bertie! Very nice to have an eagle fly past on one's birthday! Descending the grassy part of the summit plateau As we walked down over the summit plateau two red deer hinds trotted across our path in the direction of the cliffs so Biggles and Bertie were called in and put on the lead until temptation was well behind us.

Back at Cadha Dearg, this time looking south with Beinn Dearg and Meall nan Ceapraichean in the frame Through there you can see Stac Pollaidh and friends We decided on the return to head for the lower east end of the line of crags. We found what might have been a wet area to cross was pretty dry and the burn at the far end was easily stepped over, before picking up a path up the grassy ascent. From there we were able to follow a series of tiny cairns which led eventually to the more prominent cairn Liz and I had reached on the outward journey. From there it was a simple case of retracing our steps to the lochans and beyond.

Back at the lochans area, Coire an Lochain Sgeirich Biggles surveying the way back to Inverlael I'd been nursing the start of a cold with a sore throat and runny nose and hadn't slept much the night before but we'd had to abort Seana Bhraigh several times already on account of the weather and I was determined not to miss out this time. So it perhaps wasn't surprising I found the return quite long and the rough surface of the track hard on the feet and it was with some relief we reached the stone enclosure at Glensguaib and were able to go on to auto pilot for the last section through Inverlael Forest. Absolutely no regrets about going though - the cliffs around Seana Bhraigh are spectacular and well worth the effort!

Lovely. So there has been a bit of summer - I seem to have forgotten!

Seana Bhraigh repays the effort needed to get there, the cliffs are fantastic, great company DP - many thanks

mrssanta wrote:Lovely. So there has been a bit of summer - I seem to have forgotten!

And a second summer yesterday - followed by thunder storms!

Huff_n_Puff wrote:Seana Bhraigh repays the effort needed to get there, the cliffs are fantastic, great company DP - many thanks

Thanks to you too. It was a great day.

Stunning pics, always a treat to see an Eagle.

johnkaysleftleg wrote:Stunning pics, always a treat to see an Eagle.

I think so too. Majestic birds.

Great report , Lovely photo of the eagle, really great. Amazing to see the big yellow thing in the sky !! the Sun !!!, Not seen it in ages