With the weather forecast poor to say the least it was more of when would the heavy rain hit us rather than if, and with that in mind I decided to pack my emergency shelter as I knew sometime during the day we would be grateful for it

Having just come from the Bunroy Campsite at Roybridge time was not going to be an issue so by 1030 hrs we were parked up at the official parking area at Kilfinnan and booted up ready to go. There were no other cars so we were not expecting to see any others on the hill until maybe on the way back. The plan was to climb the Westerly Munro of Meall na Teanga first the back to the bealach then up to Sron a' Choire Ghairbh then maybe head over to pick up the Corbett of Ben Tee on the way back but only if the weather had been kind to us, GraemeD had done it in the opposite direction. Just about to leave the parking area before Kilfinnan Farm After walking along the track for about half an hour you come across a pile of stones and a stick which marks the path on the North side of the track heading quite steeply up through the trees. By this time the rain has started 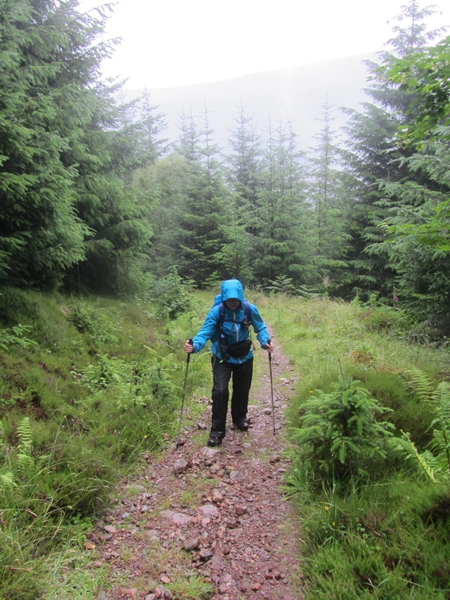 Low cloud hanging about so I guess there will be no summit views then. Getting wetter by the minute and the old Berghaus Goretex hard shell is no longer showing signs of water resistance Time to try out my rain shelter to allow for a quick snack and also to checkout a boot problem, a bit of heather stalk sticking in my sock from the recent heather clad Aberdeen shire Corbetts is causing an annoying chafing to the ankle Looking down the way we had come with the Rain shelter in full view. When I was taking this picture I was very surprised to see two other walkers coming towards me down the hill path They were none other than Albert and Elizabeth from Holland, so if your reading this guys, Hi again and hope you enjoyed your yaught trip back to Holland, it's just a pity it wasn't a nicer day, but glad to have met you both. At the bealach we head on over a wet and peaty area towards the North ridge of Mealll na Teanga where there is a feint path which skirts around Meall Dubh on the NW side where the path becomes quite wet and muddy, well it does on a day like today Heading up to the summit of M naT 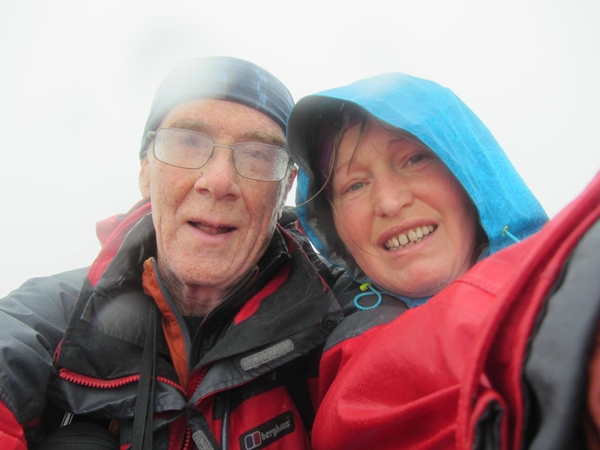 A quick summit photo selfie and we head on down out of the ever strengthening wind to again have a break in the wind shelter befofe heading down to reach the bealach and the final climb up to the second Munro. We have decided already that the Corbett Ben Tee will have to wait another day and that the final decision re the second Corbett would wait until we reach the bealach. Just short of the final climb a mutual decision is made to push on and grab the second Munro so heads down and bash on to climb the zig zag path where we meet another four walkers who have decided to do this one first as suggested by WH. They confirm that's its pretty gusty up top but not that far away so onwards and upwards. I wonder if they decided to climb M na T afterwards, we never saw them again so I'm guessing they had had enough of the conditions 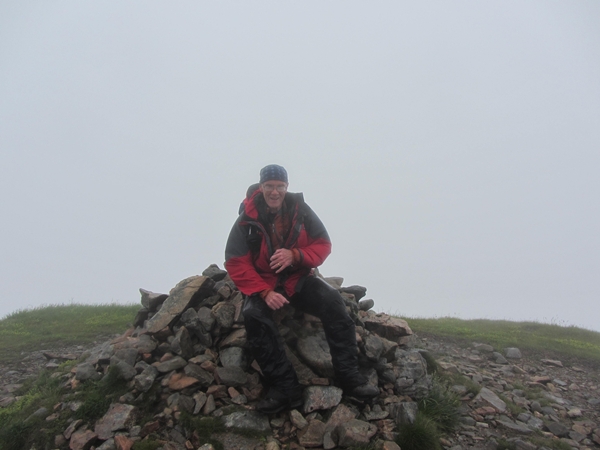 Myself on the summit. This was to be the last photograph taken on this wild wet and windy day. A quick descent back to the car and head for the wonderful hot powerful showers at Bunroy Campsite. After the hot shower as it was still raining heavy a joint decision to drive the 300m to the Stronlossit Inn at Roybridge which by the way has just changed hands and yes we will be back, a warm friendly welcome awaits and the food is cooked fresh and is just what the Doctor ordered after a wild wet windy day on the hill, the beers are not bad either.

A couple of nice winter hills, pity about the weather. I've got one of these 2 person bothy bags but haven't tried it out on the hills yet - not sure how it'll work for me as I'm usually solo but looks as though you found it useful - cheers

rockhopper wrote:A couple of nice winter hills, pity about the weather. I've got one of these 2 person bothy bags but haven't tried it out on the hills yet - not sure how it'll work for me as I'm usually solo but looks as though you found it useful - cheers

We found it a Godsend, especially at a time you think you've had enough, it keeps most of the wind at bay and at least you can have your tea/coffee and a snack without getting any wetter, you have yo be quite quick getting your bum on top of the sheet to keep it from flying awaaaaaaaaaay, lol