I had only vaguely heard of the Munros, mountains in Scotland, the 'bagging' of which sounded like some obscure type of game. Of course I had heard of Ben Nevis, Scotland's premier peak. But I was ignorant of the fact that Ben Nevis was a Munro, or that when I was fifteen years old, on a trip to Fort William, I had passed within its shadow, completely unaware.

Most of my life I've been low level walker, flat, shortish distances along roads and through valleys, interspersed with the occasional Lakeland fell. In the last couple of years however I have pushed further and higher, and what better challenge than the highest mountain in the British Isles? So I booked myself a trip to the Highlands, thinking that the end of June gave a chance of reasonable weather. Of course I should have know better. It proved to be anything but.

I thought, as I pulled on to the car park at the Glen Nevis Visitor Centre, that maybe it wouldn't be too bad. It was cloudy, but at that point not actually raining, though the upper levels of the mountain were obscured by mist. I set off across the bridge spanning the river and up over the first stile. Glancing across at the building at the foot of the slopes, I thought it very civilised that the mountain had its own inn, but fortunately it was too early in the day to provide a distraction and it was soon out of sight as I began to climb. The early stages didn't seem too steep, and given that I was wearing full waterproofs it actually felt rather warm. In fact about a quarter of the way up I decided that they were too warm and dispensed with them. About five minutes later I felt the first drop of rain. The next couple of hours can only be described as cold, uncomfortable and very wet, not to mention also extremely frustrating as my surroundings were almost completely obscured. Pictures viewed on blogs prior to my ascent suggested that the route afforded some stunning scenery, but unfortunately all I could see was cloud. Once in a while it would part a little and I would catch a glimpse of the glen or one of the neighbouring peaks, but for the most part it was simply a sea of murk - I didn't even know I had passed the loch until I saw it briefly from way above. Not stopping for photo opportunities did mean I was making fairly good progress however, I was even passing people (though others were also passing me!) As I kept climbing I was taken by the silence, and the fact although over a thousand feet higher, this didn't actually seem as steep as Scafell.

Up near the top there was a surreal moment - the path was covered by a stretch of snow. So in the mist, in June, I trudged through compacted iced water, thinking "this isn't Everest for heavens sake!" By this point visibility had curtailed even further and I could barely make out one cairn from the next. Although there was a path, it wound its way through a mass of gravel and I began to appreciate how easy it would be to go astray. Fortunately by that point plenty of people were converging on the summit, and brightly coloured waterproofs are easier to discern that piles of grey rock. So I picked my way carefully, following my fellow walkers, and suddenly I was at the top. I am sure that on a fine day the view is truly breath-taking but unfortunately all I could make out was the ruins of the weather station and a couple of protest banners on the survival hut. It appears that Lancashire's anti-fracking protest has made its way to Scotland, and the trig point was adorned with a flag of St George. I am not sure what the Scots would think of this (possibly best not to ask), or what confusion it may have caused for the people of at least half a dozen other nationalities that were on the mountain that day. I only know that I felt a real sense of achievement at having made it to the summit, and aside from the problem of cloud obscuring the viewpoints, I could barely take any pictures in any case as I appeared to have lost all feeling in my hands. The trip down was uneventful, initially wet and cold as the climb up had been, but the sky beginning to clear again as I crossed the Red Burn. By the time I reached the car again there was actually a hint of sunshine and I realised with a shock it was nudging 3.30 pm. A sandwich (that I'd carried up the mountain and down again) was in order, and a trip to the Visitor Centre, hopefully to gain some impression of the landscape I hadn't been able to see. My first Munro was conquered - and cold and wet aside, I am thinking now that it perhaps may not be my last....... 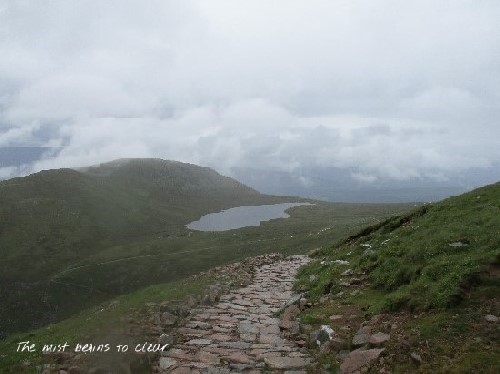