I was keeping this route for winter, since most of it goes on a good track, but with weather bad everywhere else, I had to give up and tackle the Farragons (as I call them) in summer. Not that conditions up there resembled summer at all!

We picked Sunday for this climb because the access track goes through a working baryte mine - more about it later. One would say, these are one of the most boring Corbetts, but I didn't really feel that way, neither did Kevin. We really enjoyed this walk, despite mining equipment everywhere and 4-wheel drives going past ( one driver stopped to say hi and ask how many Corbetts have we done so far

Obviously nobody visits this route except from dedicated baggers)
Currently, it's possible to park at 780562, at the start of the track leading to the mine - enough space on the side of the track for a few cars.

Track_FARRAGON 31-07-2016.gpx Open full screen  NB: Walkhighlands is not responsible for the accuracy of gpx files in users posts

We braced up for the boring slog up the "A9" through the forest: Above the tree line, we took out cameras, but not surprisingly, not much to photograph. No splendid views at the moment, cloud was down to 800m or so, all surrounding higher hills topped with clag.
Schiehallion: 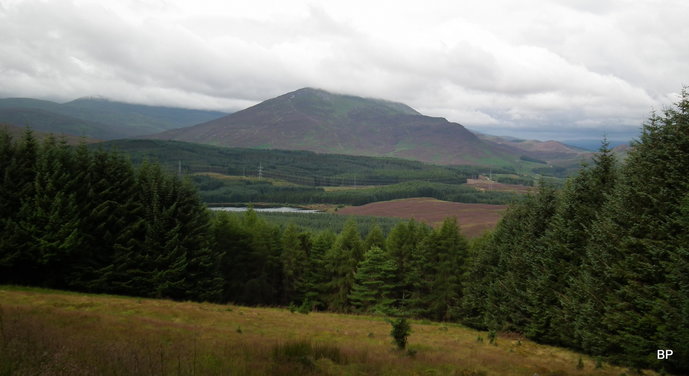 Not the best of days - looking down the track, with cloud on the horizon:

To our consolation, the first Corbett was only a short climb up from the mine track:

I should be getting used to views like that on this route: 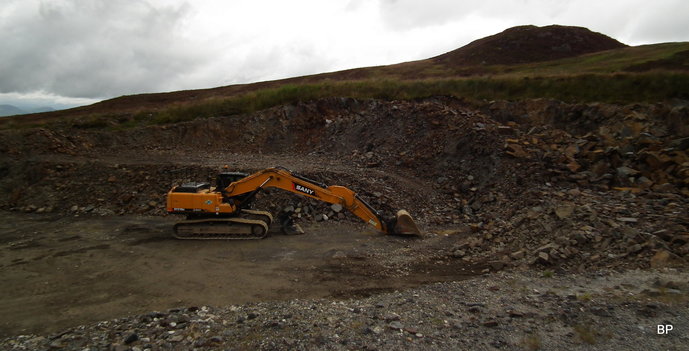 View east to Farragon hill from the highest point of the track, only 50m below the summit of Meall Tairneachan. The mine being out of sight, at the moment it looked like a nice ridge:

We quickly climbed up the grass to the summit of Meall Tairneachan, not much effort to add another Corbett to our tally...

With cloud low and strong winds, it wasn't the most comfortable place to take a break, not that we were tired much after marching up the track

We stayed only for a few minutes to take some photos. West to Schiehallion:

We still play this silly "wind turbine spotting" game. I get a point for each top, where we can spot a windfarm, Kevin gets a point if we can't see any. I'm so far in front now that I lost my count 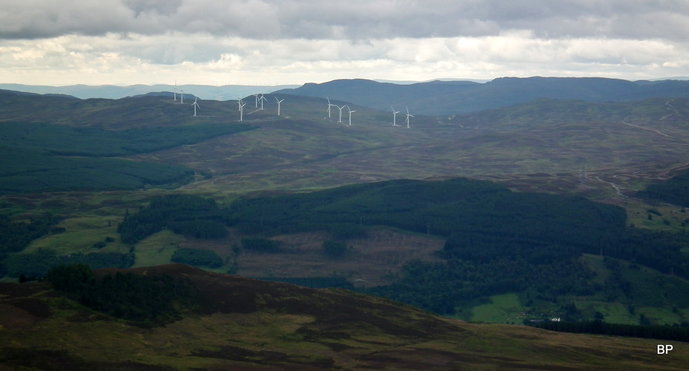 After a short break on the summit, we returned to the track and continued towards Farragon Hill. As soon as the mine came in sight, we stopped to check if it was safe to walk through. It seemed deserted, no workers, a sound of a generator but no machinery noise, we assumed it was safe to go: 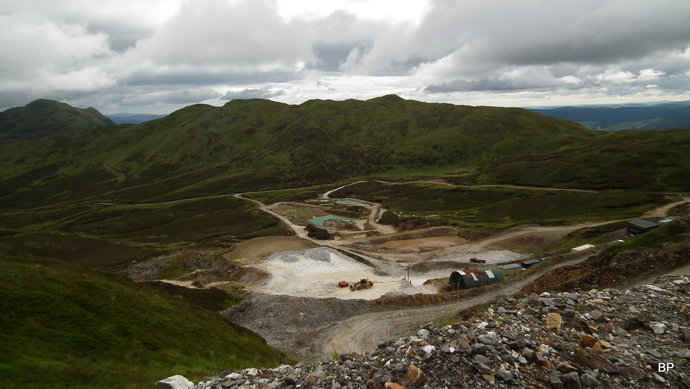 I remembered the old tin mine we visited once when in Cornwall. It was open as a tourist attraction and we could wander about the main part of it by ourselves. We were given yellow helmets (mine was too big for my head

) and electric torches. Kinda weird experience. I had also been to a big salt mine in Poland, but that was a tour with a guide so completely different. Not sure I'd want to get inside this one

Kevin snapped a photo - and when we looked at it at home, it looks like there might be ghosts lurking inside this shaft... 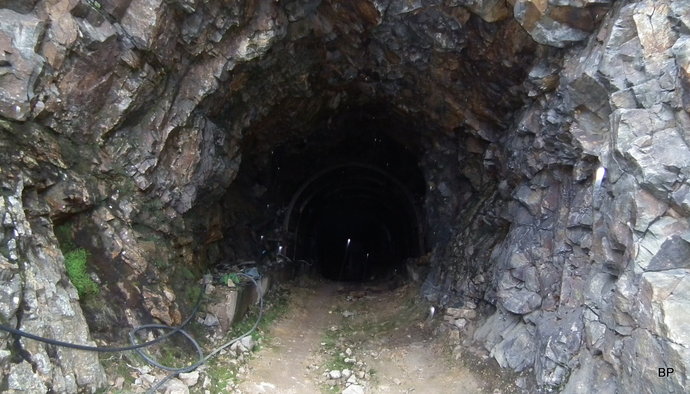 Baryte (barium sulfate) is mined for use in various industries, including paper-making, as a filler in paint and plastics, for medical applications, to make LED glass for TV screens and many others. This particular mine will almost certainly send most of its output to Aberdeen as a weighting agent for drilling fluids in oil and gas exploration in the North Sea.
We passed the mine without any problems and headed for the second Corbett. The track past the mine is mostly grassy and more pleasant to walk on.
Baryte mine from below: To the east and north from us, weather seemed a bit better, even some sunshine over Beinn a'Ghlo:

The track ends at the high col between Farragon Hill and the 736m top, there are various animal tracks heading for the summit, we simply aimed at the top and crossed the wet col, climbing up to Lick Hill (

).Now, the top was only a short walk away:

Seems like some very peat haggy ground behind us, but we managed to avoid most of it:

The final climb in wind and drizzle: Summit snap - Corbett no. 108. Not far(ragon) away from my half way point! 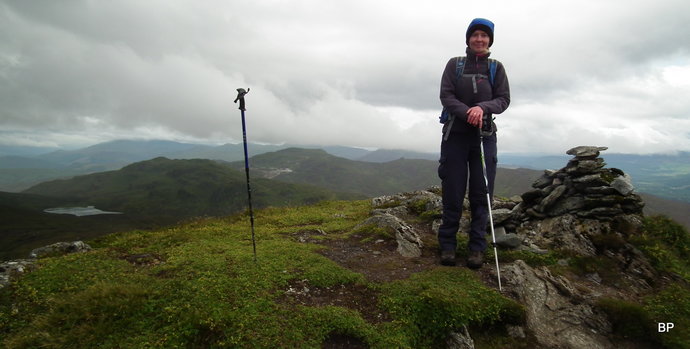 We intended to have a picnic break on this summit, but it was far too windy and we were forced to hide inside a large peat hag to escape the gusts

Kevin left his rucksack on the grass and went back up to take some pictures for our album. I must say, Farragon Hill is much better vantage point than Meall Tairneachan. Even in partly cloudy weather, we still appreciated the views: 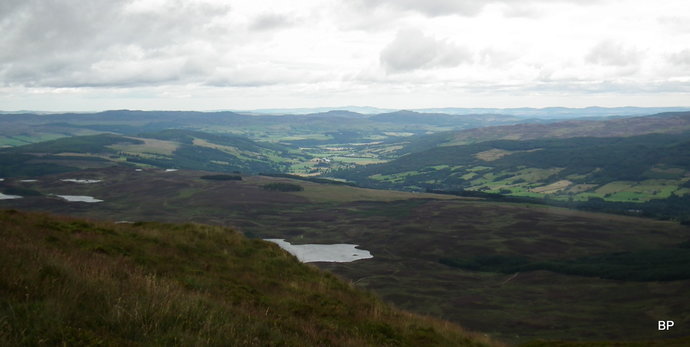 The Blair Atholl hills, Beinn a'Ghlo and Ben Vrackie, hard to believe I climbed them all! 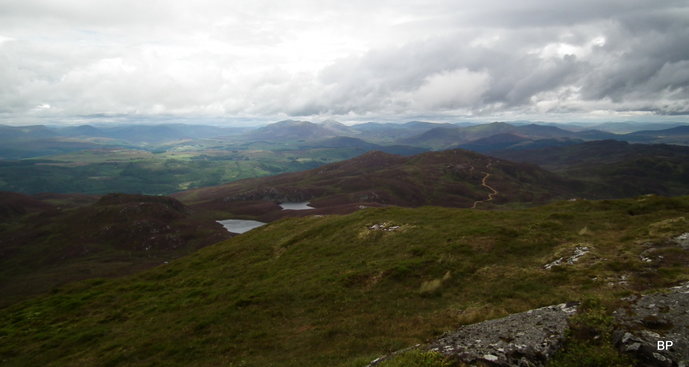 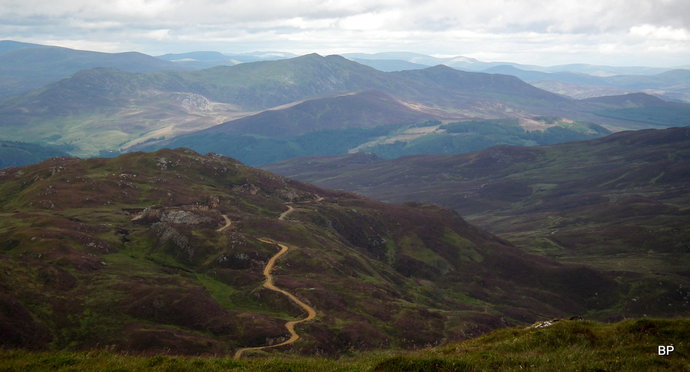 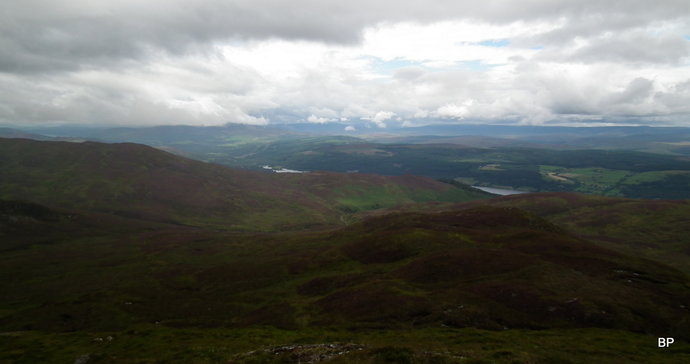 More views from inside a peat hag

There isn't much choice here when it comes to return route, just retrace your steps to the mine. The track can be seen zig-zagging down the slope, Lochan Lairig Laoigh to the left:

Zoom to the mine and Meall Tairneachan:

We took a slightly different line of descent, avoiding the boggy bottom of the col, picked the end of the track and walked back past the mine, over Meall Tairneachan and down to the car. Two more Corbetts added tot he tally, not the most exciting walk, but something different for a change.
..........
That was the end of our main holidays, but Kevin managed to scrap a few extra days off in August, so we were looking towards it, hoping to bag Lurg Mhor and Cheescake. But it wasn't to be. We faced some really atrocious weather, wind gusts 50 or 60mph, rain, cloud, even snow showers (

), so all dreams about overnighting on mountain summits had to be postponed for another time. We managed to crawl up 2 Grahams, 2 Corbetts and 2 Munros, most of this in half bent position. Reports to come soon

The date walked appears as 18/08/2016 and it is still the 17th! Submitting your walk reports before doing the walk?

Yorjick wrote:The date walked appears as 18/08/2016 and it is still the 17th! Submitting your walk reports before doing the walk?

Ha ha, the dreaded interenet bug again! Not the first time the date got messed up, strange things happening on WH lately

We didn't even know there was a bothy up there... The guys in landrovers were actually from "Highland Safari": https://www.highlandsafaris.net/land-rover-safaris/seasonal-safaris.html
They take people up that track for photographing/wildlife watching purposes, though I wonder what kind of wildlife can one watch near the mine shaft, apart from an odd panther in woolly hat?