After yesterday's walk across Rannoch Moor to the Kingshouse, Day 2 now loomed for the return walk back to Rannoch Station. Today's walk would take us back on the same route as far as the Black Corries Lodge but instead of following the tracks above Loch Laidon, we decided to veer off and to follow a good track NE towards Lochan Meall Phuill. From here we would follow the good track across the lower slopes of Meall a' Phuill until it petered out then ascend the slopes to Stob Nan Losgann before finally reaching the summit of the Graham Stob na Cruaiche at 739m, 2424 ft. It would be near this summit that we would place a plaque to remember my dad and to the enjoyment that this area brought him. We would then descend to the large forest which skirts Loch Laidon reaching the forest track which would take us on the final few miles to our waiting car at Rannoch Station. A long but hopefully rewarding day. 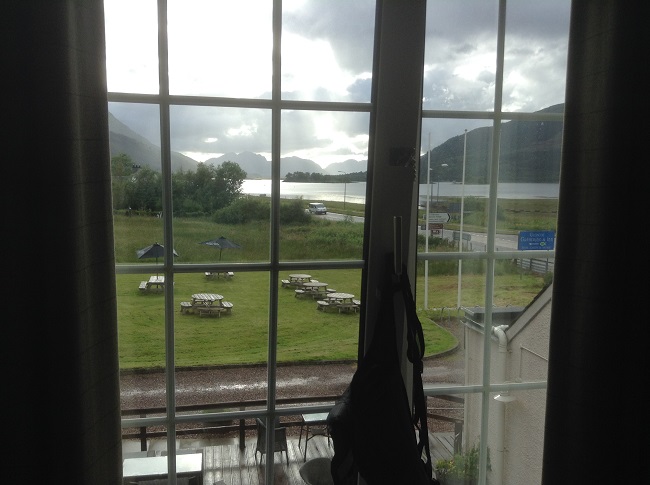 Room with a view - Loch Leven Mist on the Pap

After a good meal and a few beers last night, a good night's sleep was had, despite some snoring from someone who shall remain anonymous! The alarm clock the following morning seemed to arrive too soon after hitting the pillow last night. A sore and stiff start was the order of the day until I got warmed up. A good Scottish breakfast got us mentally prepared for the walk ahead. The day turned out dry with a good cloud cover on the hills on either side of Glencoe but the midges were out in force as we waited for the taxi to arrive to take us to the Kingshouse Hotel.

The journey to the start, or finish, depending on what day you were on was a good one. Surprisingly for such an early hour of the day, there were plenty of people roaming the glen. Arriving at the Kingshouse, there were also many people mingling around contemplating their plans for the day ahead. A young stag was spotted resting in a small wood undisturbed by the activity going on at the nearby hotel. 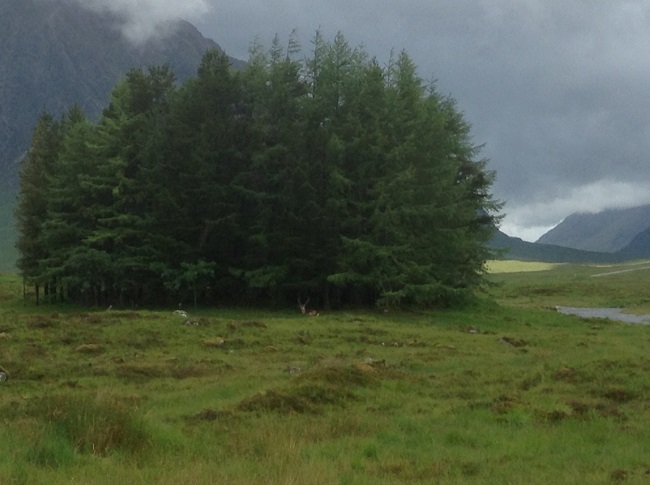 Stag relaxing in the small wood 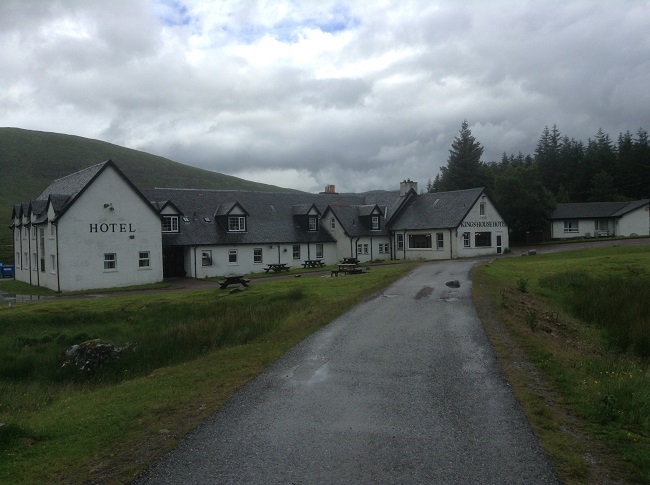 Leaving the Kingshouse for the return journey 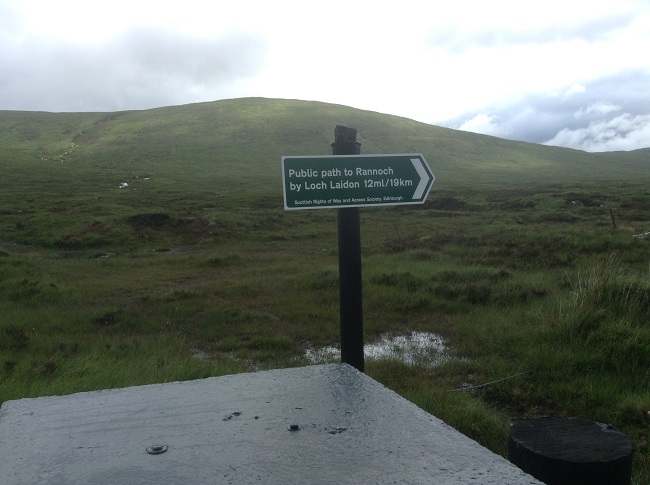 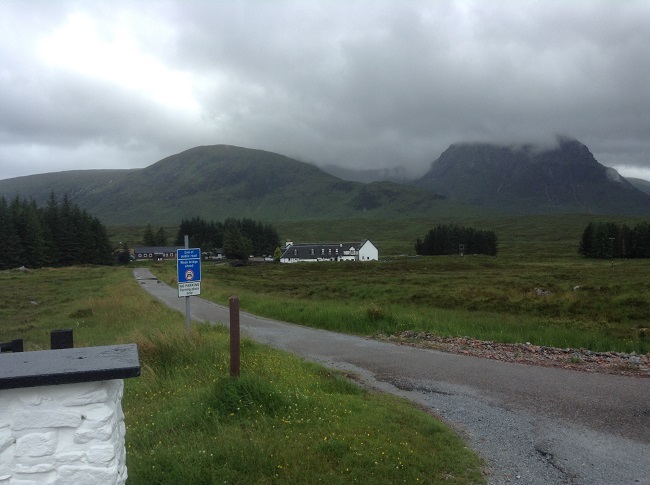 Once ready, we all set a cracking pace towards the Black Corries Lodge. Unlike yesterday, this section of the walk was completed in pleasant conditions. Every so often we would glance ahead at Stob na Cruaiche as it briefly enveloped into mist before clearing again. On reaching the Black Corries, we decided that we would take the alternative route back across Stob na Cruaiche hoping that once we reached the ridge leading to its summit that the views would be good. 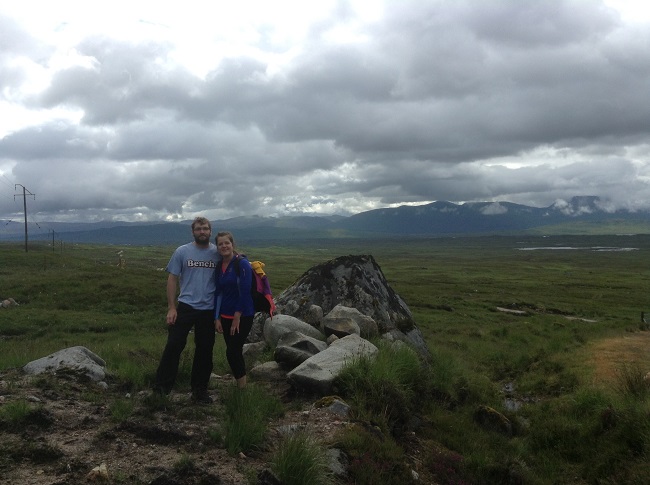 At the Black Corries - decision time 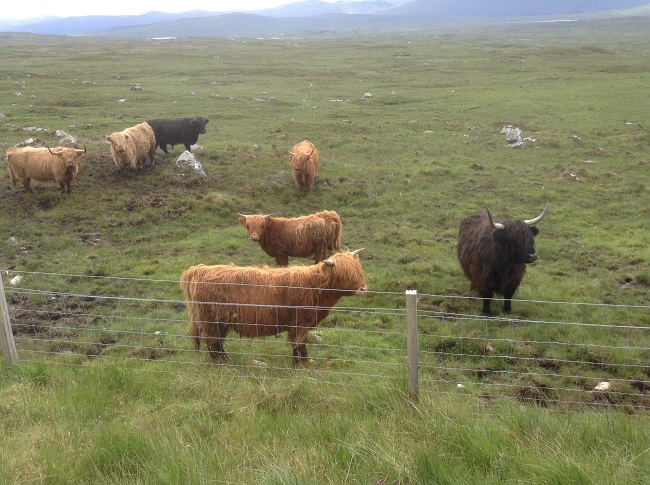 On leaving the Black Corries, the good track strikes NE heading for a small but lovely lochan named after the hill that overlooks it - Meall a' Phuill . Before this however, we passed a herd of highland cattle, well suited to this environment and giving us good picture postcard photos.
Shortly after this, the lochan is reached where there is a small fisherman's hut and boat. This is a lovely spot to take a break as this area is so serene and peaceful. A large brood of ducklings were disturbed from the shoreline as they desperately and frantically swam following their parents' lead. Ducklings on the lochan 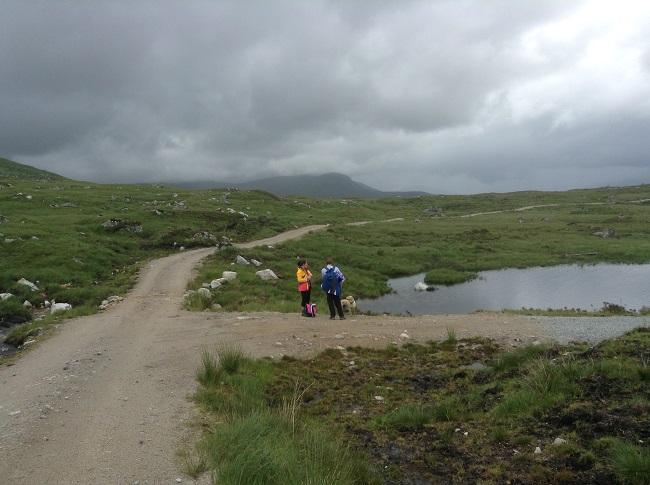 The lochan where I left my poles!!

From here the good track continues as it gradually begins to climb the lower slopes of Meall a' Phuill. It was a good half mile along this track that I remembered I was missing something - my walking poles!! I had placed them into the soft peat at the lochan and had forgotten all about them. How could I have done this? Dementia setting in I'm afraid. My daughter was prepared to go back and get them but I said not to bother, a decision I would come to regret.

The track soon peters out then a faint path of sorts can be seen climbing the lower slopes of Stob Nan Losgann. This was far from easy as the path soon fades out and now you are left to climb the peaty slopes with the occasional peat hag thrown in. I was starting to find the going tough as I puffed and panted my way up taking lots of breaks. I sorely missed my poles. Berni and Steven were finding the going much easier and I felt they were holding back for me. This hill may have Graham status but it had plenty of false summits to contend with - every one reached found me staring ahead to the next one cursing and swearing as I went much to the amusement of Berni and Steven. This damn hill was proving to be harder than any Munro that I have climbed. View down to Loch Laidon from ascent of Stob na Cruaiche

On finally reaching the minor summit of Stob Nan Losgann with its rocky pinnacle, the going became slightly easier as the ground became more firmer. All that remained now was the long walk along its broad ridge with its many false summits to finally reach the summit of Stob na Cruaiche at 739m, 2424 ft. The summit trig point here was not the usual obelisk but surprisingly round. All the hard work to get here eventually paid off by admiring stunning panoramic views south down to Loch Laidon with the Rannoch Moor beyond to the Bridge of Orchy hills, north to the Blackwater Reservoir, west to the way we had just walked to Glencoe and finally east towards our destination Rannoch Station, Schiehallion and Loch Rannoch. This really was a magnificent viewpoint and a spot that my dad would have enjoyed. Very few people walk to this summit as witnessed by the lack of footprints or paths. It was here that we took a well earned rest and lunch break. The round pillar trig point at the summit Me, Berni and Angus the dog at the summit

From the summit, a stalkers' path created by a quad bike or snow cat can be seen. Descending this path, we came across a nice spot to place a plaque in memory of my dad. I think he would have been pleased with the location as fine views were observed all across Rannoch Moor. A few poignant moments were spent remembering him before we reluctantly left the spot for him to enjoy this fine view on his own.

The path to Loch Laidon, although boggy in places, gradually descends the slopes of Stob na Cruaiche giving great views east towards Rannoch Station and beyond. Finally, the sun showed its presence which was very pleasant at this part of the day and made the trudging through many boggy sections bearable. The long descent to the forest track, Schiehallion away in the distance

The path eventually drops steeply down into the large swathe of forest on Loch Laidon's north side at a firebreak. A nice burn is finally followed down with lone pine and birch trees for company. Finally the good track is met which we followed yesterday to Glencoe. All that remained was for us to turn left and to follow this track all the way back to Rannoch Station. Finally emerging from the forest, Rannoch Station is now seen away in the distance - sadly the final end to our 2 day emotional and extremely enjoyable journey. Return visits here will be definitely undertaken in the future to see how my dad is enjoying the landscape that he so appreciated and loved. Journey's end at the Moor of Rannoch Hotel