At Champex the TMB divides once more. The main trail takes the 'Bovine Route' which climbs and contours through woods and pastures above Martigny. With some trepidition we opted for the Fenetre d'Arpette variant which crosses the highest and roughest pass of the route. I'm not great with heights and worried about the scale of the pass, but in the event it wasn't scary at all.

A water race is followed from Champex up into the Arpette valley. After passing a refuge the valley becomes wild and very beautiful. The stony col on the horizon isn't the Fenetre d'Arpette (it leads only up onto a glacier). 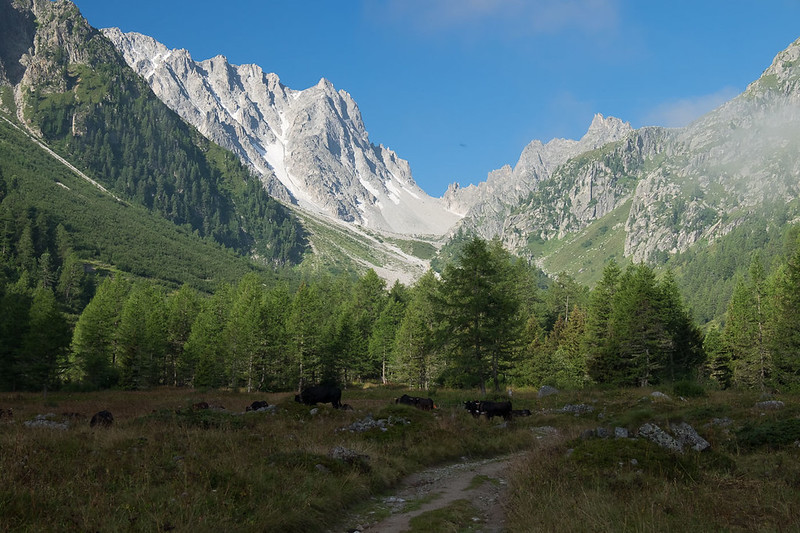 Further up the valley we got a close up view of a group of very active marmots. 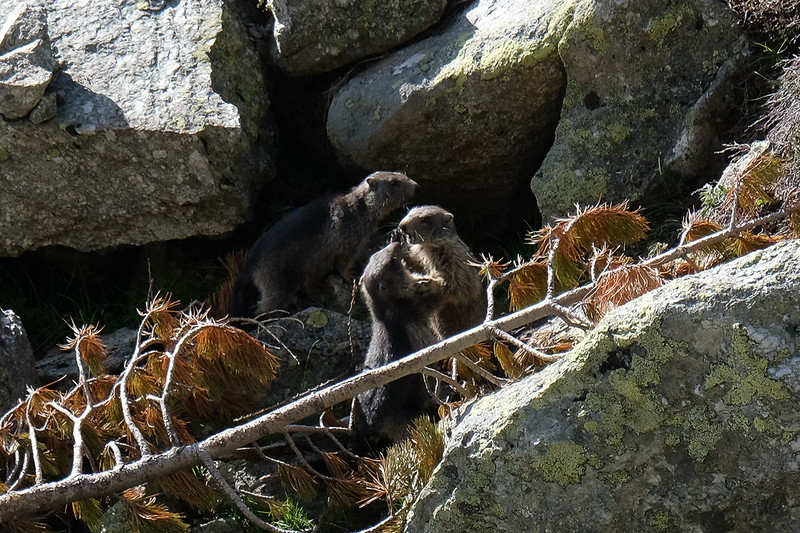 The scenery got more and more impressive as height was gained (and the weather started to get very hot). 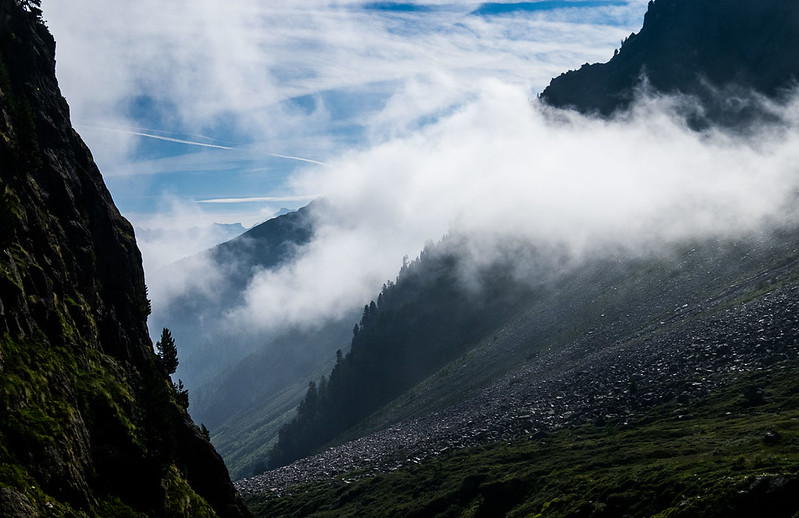 Most of the TMB has excellent paths, but the route up the Arpette eventually reaches and crosses a boulderfield. It's really not that bad for anyone who has roamed alot in Scotland though, with only a shortish steeper section. 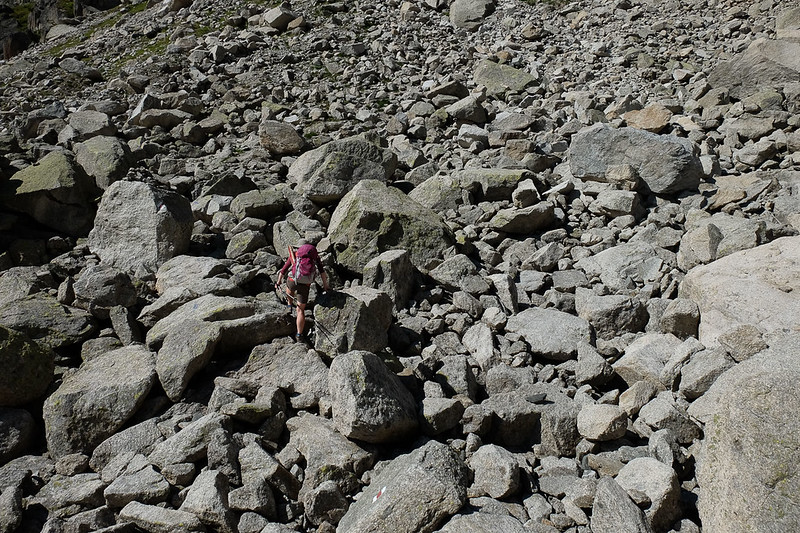 Above the boulders a zig-zag path tackles the final steep slope to the narrow, very rocky col at 2665m - and the sudden view down the far side - steep, but not vertiginous. 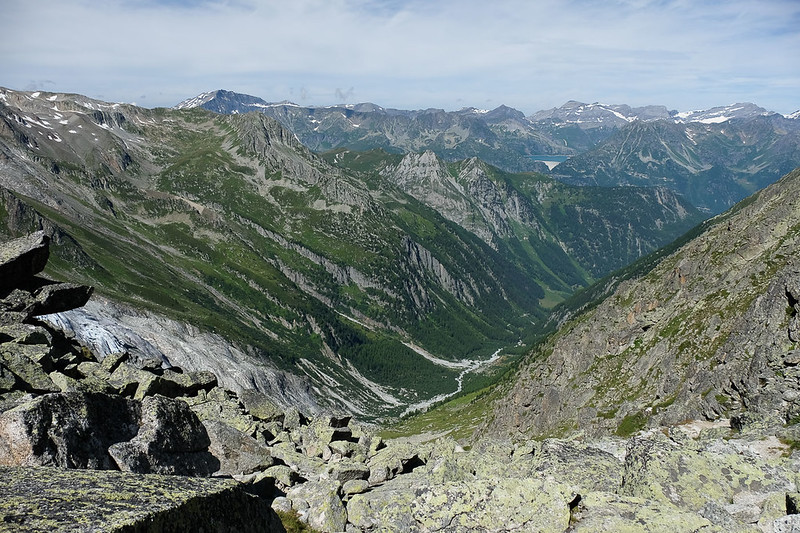 The descent path swings right at first, and is rocky and steep but not too difficult. The descent is, however, very long. There's plenty of time to stop and admire the close-up views of the Trient glacier on the left. 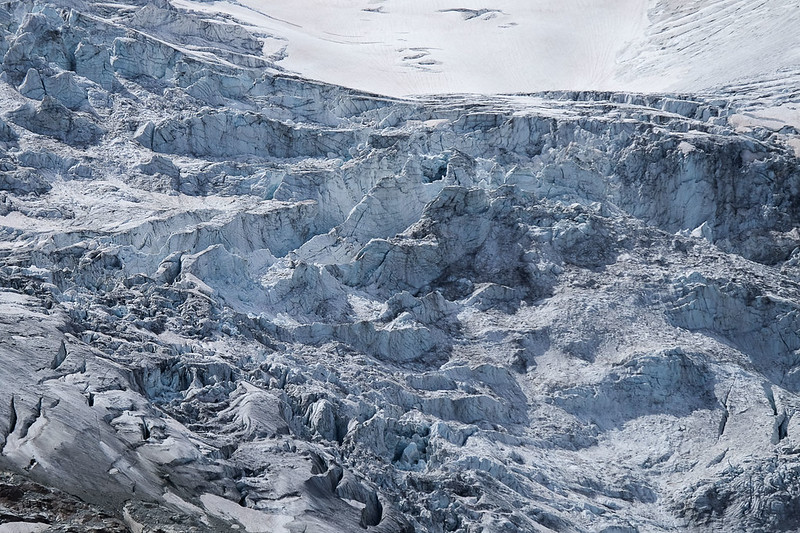 We were pretty weary by the later stages of the descent, and couldn't resist blowing an extortionate amount of Swiss francs on ice cream at the Chalet des Glaciers in the valley far below. 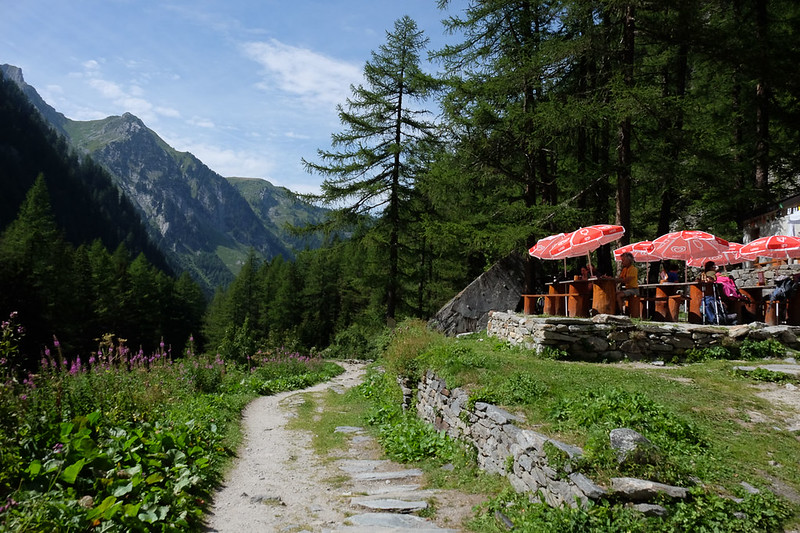 From here the descent continued down to the small village of Trient, where we stayed at the ramshackle Auberge de Mont Blanc.

Heavy rain was forecast today, so we set off early in the hope of reaching the Col de Balme - where the TMB crosses back into France - before it really hit. The climb initially zig-zagged through woods before a more open final section to the col - and last views of Switzerland. 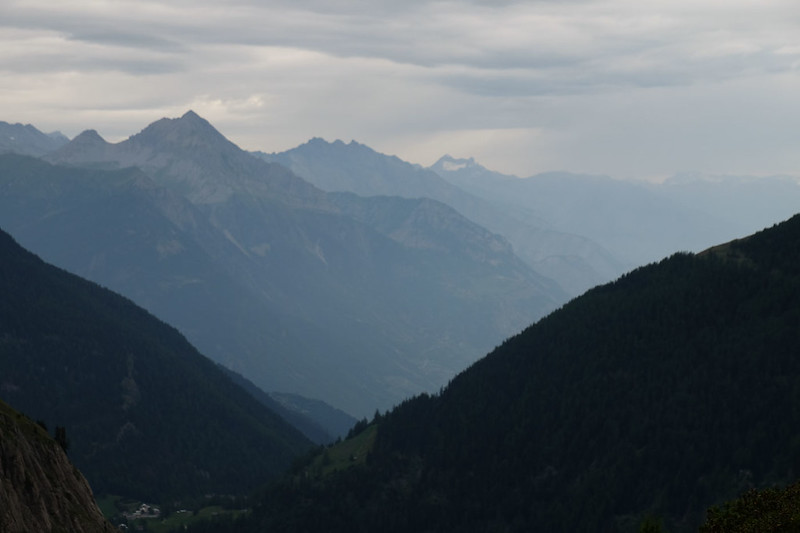 The rain hit just before reaching the col. The way divides again here, with the best option heading for the Aiguillette des Posettes ridge. We'd done this ridge before in perfect conditions and its a great walk, but not such a good option in rainy weather, so we were happy to take the more direct route via La Tour. There's a refuge at the col but it looked less than welcoming, so we pushed straight on down the far side before stopping for a coffee at the bar at Charamillon. From here a good path continued down to La Tour. 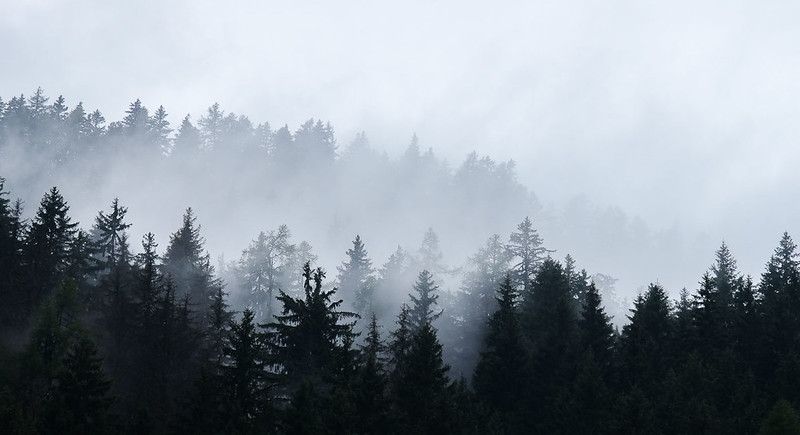 We reached our accommodation in Argentiere by lunchtime!

The forecast was for fine weather to return today, but we started the walk up towards the Col de Montets in thick mist. The mist continued for the long, steep ascent above the col, and along the first section of the famed Grand Balcon Sud walk which runs through the Aiguilles Rouges nature reserve.

Eventually the weather started to clear, and we took the higher path at a junction to head towards Lac Blanc. First we reached the Lacs de Cheserys and enjoyed superb views across the Arve valley to the Mont Blanc range - including the Aiguille Verte and the Drus. 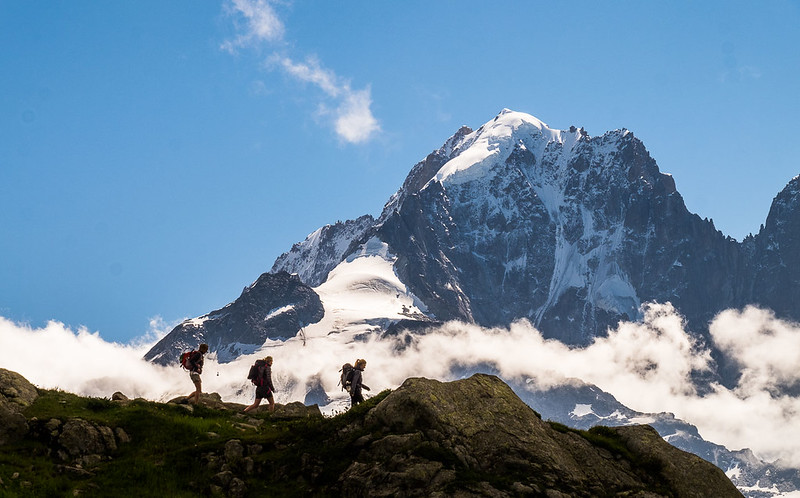 After a couple of easy ladders the path reaches Lac Blanc, one of the most popular spots in the Alps, famed for its views. Today it was packed out with people. Above the lake we spotted an impressive Ibex, and a couple of people scrambled up the cliffs to try to get close. They were close before the ibex noticed, but when it did - instead of fleeing - it walked straight towards them, giving them a bit of a fright. 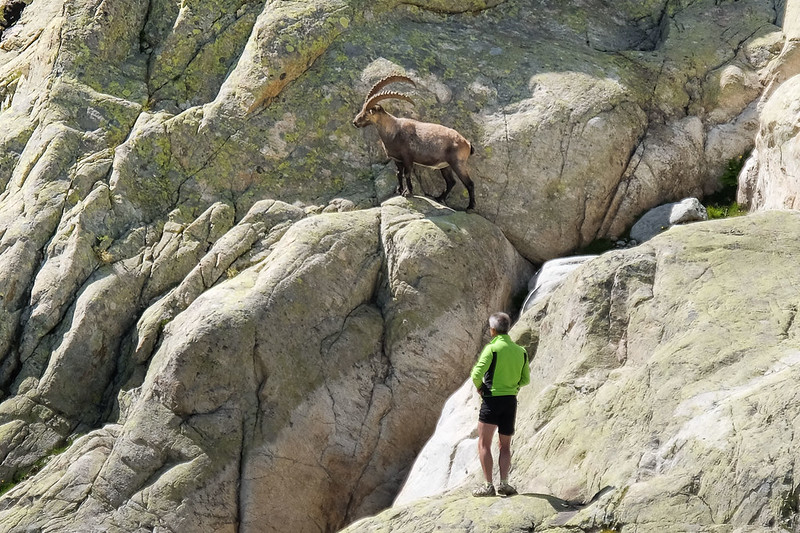 The breeze today meant there weren't any reflections to photograph in Lac Blanc, but I did stop off to take a few shots at tiny Lac Flegere further down the path. 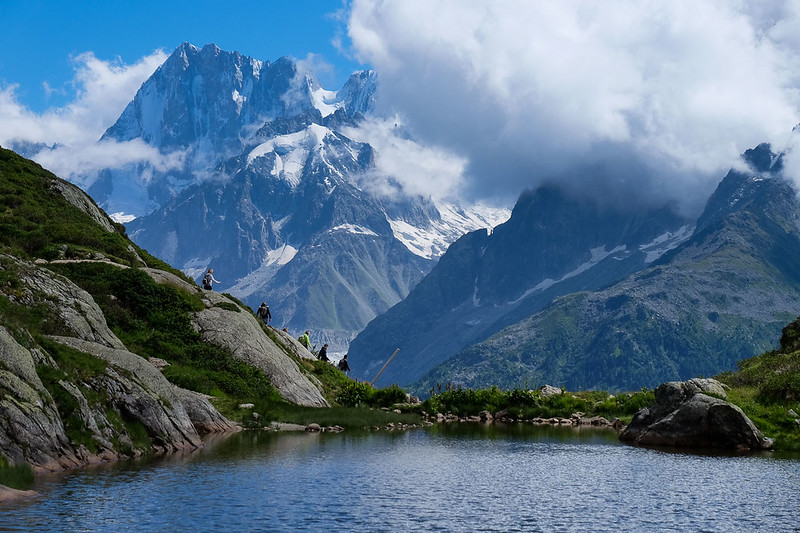 We descended as far as the old refuge at Flegere, now set below a cable car station. 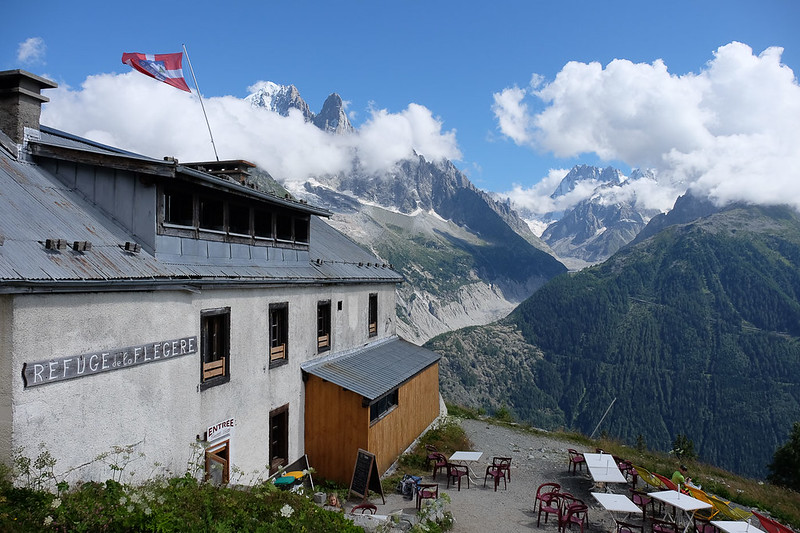 Nonetheless, the views are superb, with amazing colours on Mont Blanc and the rest of the range at sunset... 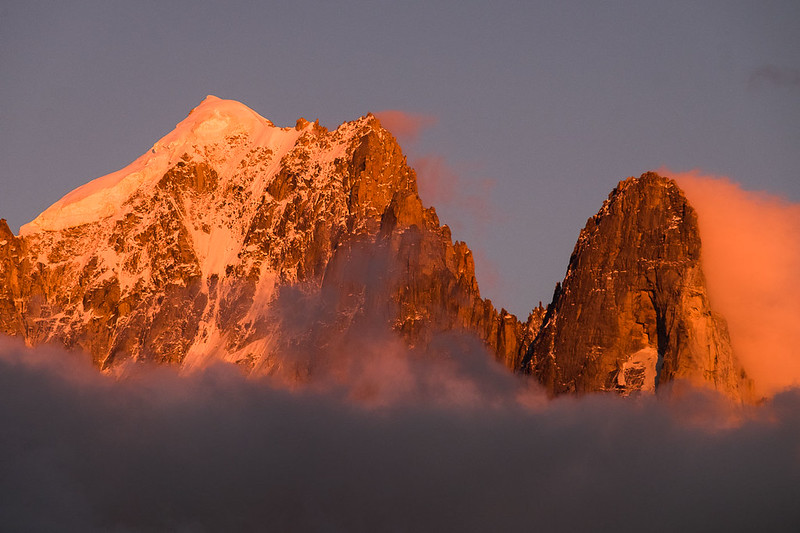 ... and of the lights of Chamonix and the Milky Way after dark. 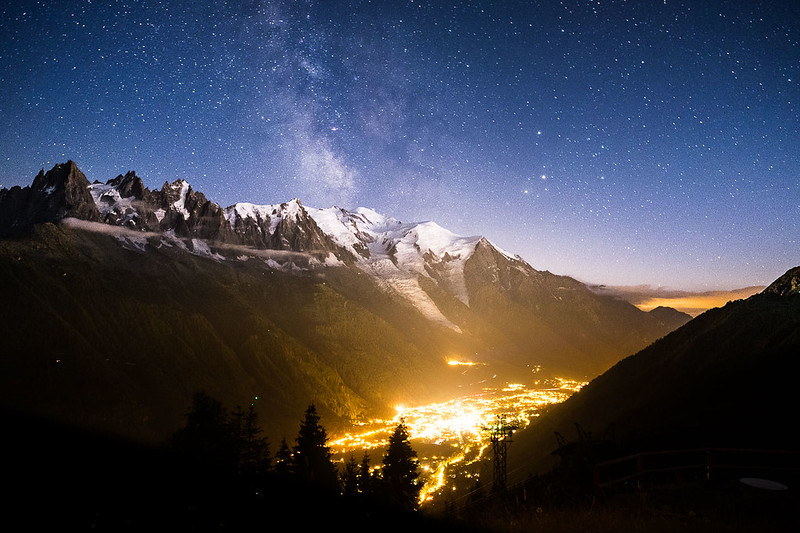 Morning, and after the busy trails of yesterday it was great to continue for the two hour walk along the Grand Balcon path to Plan Praz without meeting anyone at all. Stunning views as ever, but parts of this section have been really spoiled by the amount of ski development and construction. 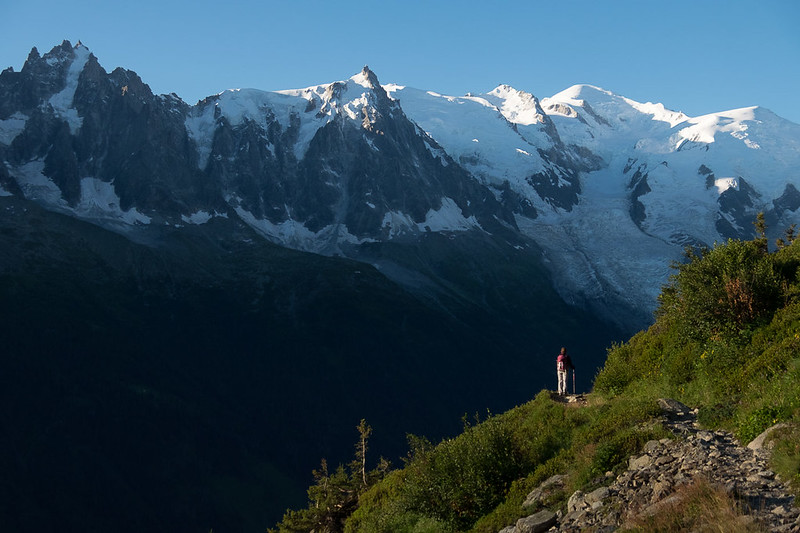 Beyond Plan Praz things become wilder again as the route begins the climb to the Col de Brevent. The summit of the Brevent itself is the final major objective on the TMB. 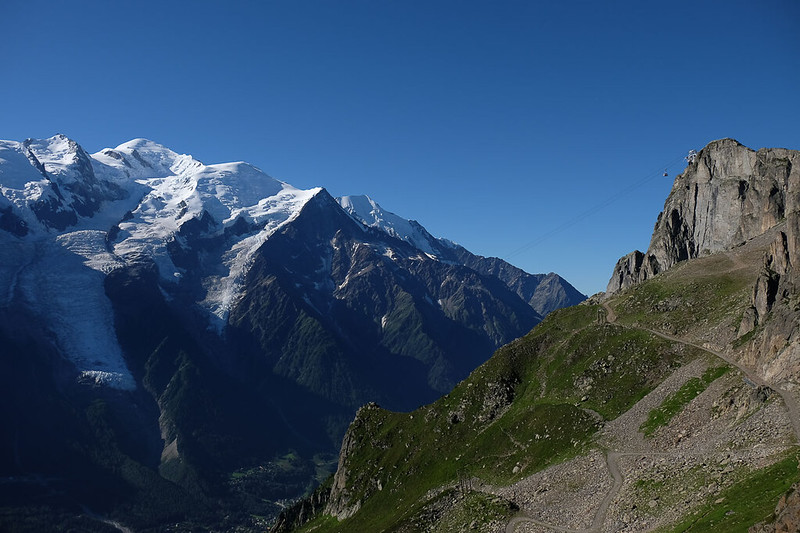 Although it can be reached easily by cable car (or up a piste track), the TMB takes a more satisfying and wild route round the back, with some rugged going and even a couple of ladders to ascend. 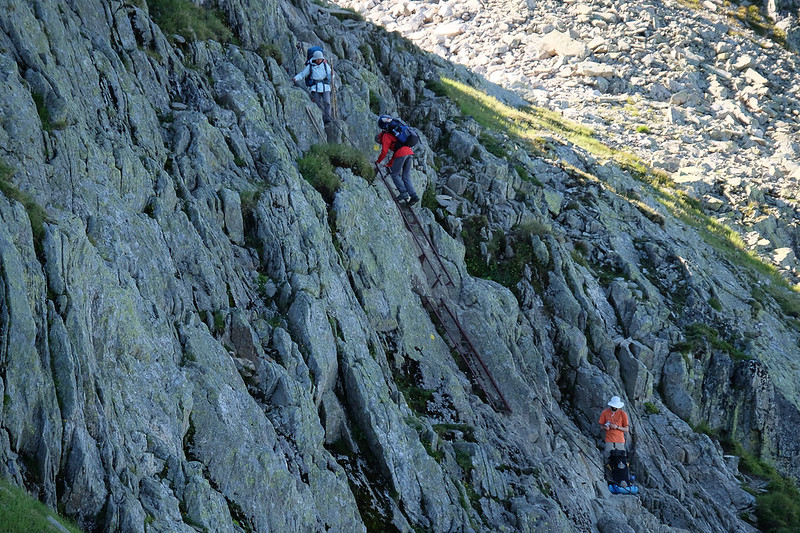 The summit is busy with two cafes as well as the cable car, but is renowned as the best place from which to view Mont Blanc. 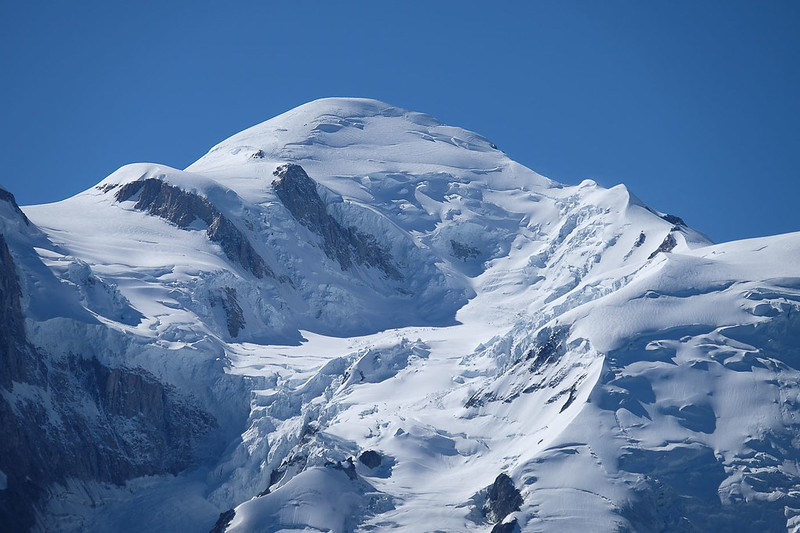 The view on the other side, and back along the Aiguilles Rouges, is well worth studying too. 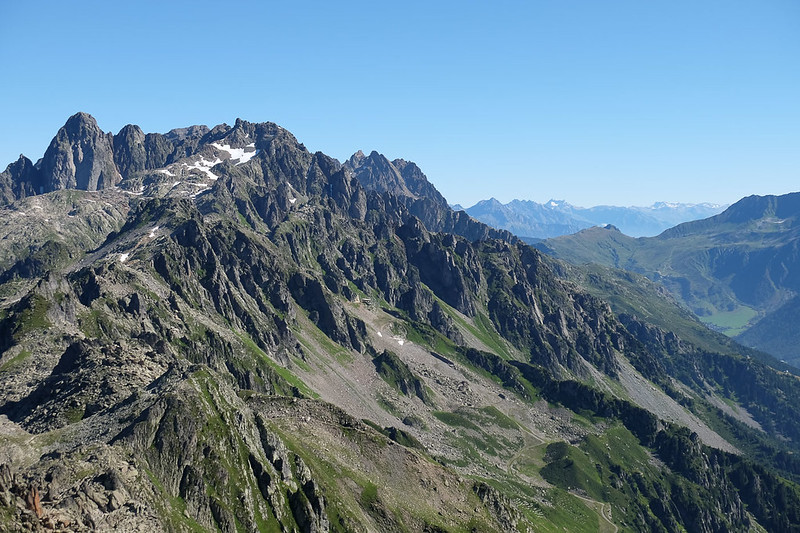 The route now continues down through a rocky landscape, soon leaving the majority of people behind. It descends steeply, passing the lovely wee Refuge de Bellachat, an early staging post on a tiring descent of more than 1500m. 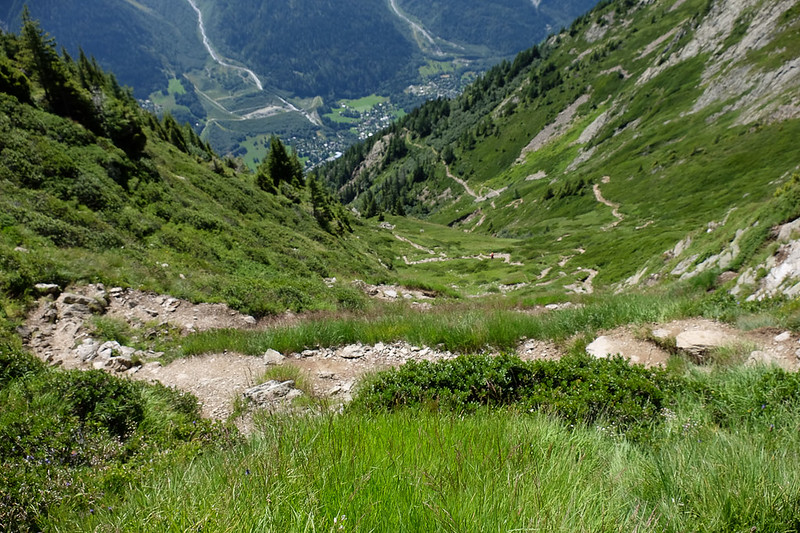 Throughout the descent there are stunning views of the mountains and of Chamonix far below. 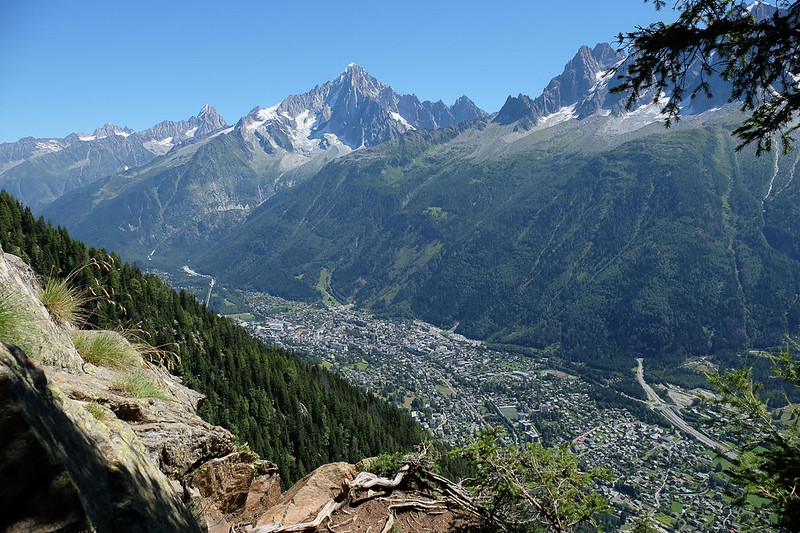 Once right down to Les Houches the TMB is complete. We got a bus into Chamonix to celebrate a stunning walk. 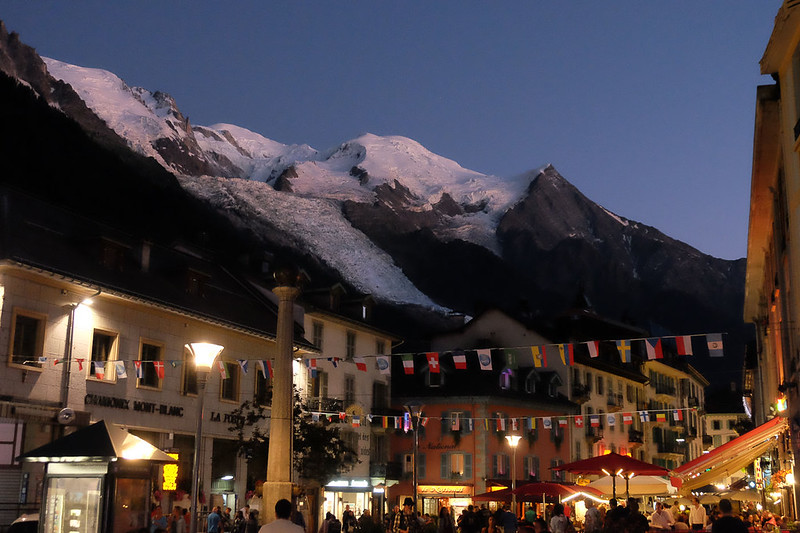 We found the Tour du Mont Blanc to be an absolutely superb route. I had worried it would be too touristy- in the event some sections were busy but overall not too many people, and the landscapes throughout were out of this world. The route is quite strenuous in terms of ascent (over 10,000m even if missing the harder variants) but the paths are generally very good, with nothing to bother a regular UK hillwalker.

Enjoyed all 3 parts of this. Looks a fabulous trek. The photos are superb - the ones of the Milky Way and Chamonix are very striking.

Fantastic report and pics, how do you get the Chamonix and Milky Way shot? I have bought a bridge camera and wondering if I can ever get a shot like that?

Fantastic report and pics, how do you get the Chamonix and Milky Way shot? I have bought a bridge camera and wondering if I can ever get a shot like that?

You can have a go if you have a tripod. You need to use the widest aperture you can, the widest angle (so the stars don't start to make trails) and then the longest shutter speed you can that prevents the stars trailing. That shot is at 14mm on a crop sensor, 30 secs, f2.8. 30 secs is about the longest you can use without trails showing at 14mm - you'd need a shorter time if your lens is less wide than that. You can then use the lowest ISO that lets you get the shot.

We have recently returned from completing the TMB and I found your 3 reports to be very interesting and helpful in the run up to our trip Paul.....I read and reread them avidly and on the trail would refer to them in the evenings! It was a holiday that had been bubbling away in the background for some time, and I have to say it was reading your reports at this time last year that encouraged us to "push the button".

What an experience! Fabulous scenery, meeting so many interesting folk, mostly great weather and on the whole good accommodation and food! The only part of your report which concerned us was the "ramshackle" Auberge Mont Blanc as that was one of our overnight stops, so we descended to Trient with some trepidation, but in the event it turned out fine.

So, I would say to anyone, if this is on your bucket list - go for it!