Having reached the annual target of 23/getting to 200 Munros, I grew lazy somehow and decided to do some low level walking for a change. Last weekend was sunny but quite blowy so instead of struggling up another hill, we went on to finish the Dava Way.
By "finish" I meant walking the only section of this long distance route, we haven't done so far, which is between Grantown and Dava. The stages between Forres - Dunphail and Dunphail - Dava we know quite well, cycled up and down, walked a couple of times (once in winter) and climbed Knock of Braemoray, a local hill towering over the moorlands of Dava. Any time of the year, it's a lovely route to do, gives the feeling of isolation despite running close to A939. Most of the Dava - Grantown part is walked along the old dismantled railway line, closed back in 1956.

So now to the ghost train legend...
"Back in 1920, then again 40 years later, members of a local family used the railway as a shortcut during the hours of darkness. To their shock they encountered a ghostly stream train – complete with empty carriages and empty cab – rushing past. Incredibly the train was floating above the track.
Since then, and long after the rail line closed for good, many locals have reported the sounds and smells of steam trains rushing past. Some have even seen the lights of a train in the distance." (taken from http://www.greaterspeyside.com)

Of course, I never hoped to see the ghostly train in the middle of the day

but the walk itself didn't disappoint me.

Track_DAVA GRANTOWN 10-9-16.gpx Open full screen  NB: Walkhighlands is not responsible for the accuracy of gpx files in users posts
We started from Dava, where we parked in a large layby with a phone box, just south of the junction between A939 and A940: We retraced our steps along the road for a short time till we found a track giving access to Dava Way: We planned to walk to the outskirts of Grantown (not necessarily to the center of the town), find a good picnic spot, laze about for a while, then walk back. Enough to keep us entertained for most of the day, but if one has transport arranged, the whole length of Dava Way could be walked in a single day. A short section through the forest and we walked out onto the wide, open moorland. Blue sky - good conditions for photos! The heather is now in the purple state of mind - adds lovely colours to pictures! Looking south from the Dava Way:

On this stage very few remains of the old railway are still in place. Possibly this old snow fence remembers the trains passing by:

No ghost train so far, just the empty moorland and rolling hills around...

Sometimes low level walking can be just as satisfying as hard climbing. All's up to attitude.

This striking fellow is a Dragoon. The sculpture has been installed where the Dragoons crossed the Dava Moor at night to surprise the Jacobite army encamped at Cromdale in 1690. Sadly, the sculpture has recently been vandalized by some utter idiot, who sawed off the Dragoon's riffle!!! Why do such a thing is beyond my comprehension. Not that the sawed off riffle would be useful for anything - it was made of wood! After 5 or so km of walking, we left the open moorland as the path descended gently into more forested area... The former railway runs through this gorge, obviously not a natural feature, but still picturesque: We stopped here for a few minutes so I could experiment with my camera again...

They say all mushrooms are edible but some just once

These are definitely not on my menu tonight, but they make for nice photos Just south of the gorge we took a detour to have a look at Huntly's Cave. The viewpoint is well worth the visit, though the cave itself might be a bit of disappointment. Crags and cliffs above Huntly's Cave: ) but we couldn't see them - there's quite an overhang.
Kevin investigating: The gorge of Allt an Fhithich from above: The cave itself is just a crack in the rocks: 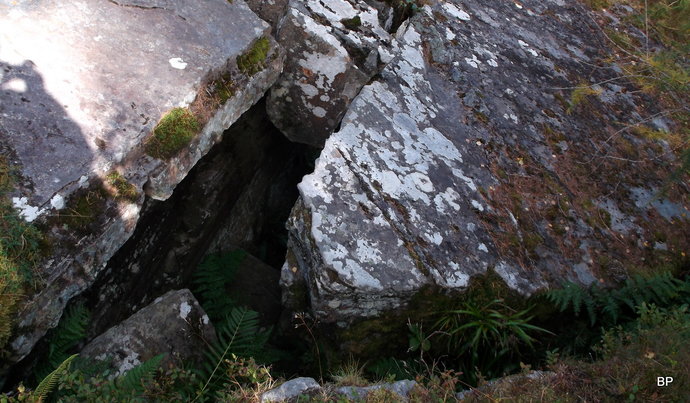 I was glad we swapped hills for this old railway line, it turned out to have more attractions than expected! We returned to the main walkway and continued south for another 1km or so, before turning off the dismantled railway onto a forest path: After a short walk through the woods we emerged on a quiet country road with lovely views to surrounding countryside:

Ben Rinnes in the distance: It's only a few hundred meters along the road before the Dava Way turns onto a made-up path again. Soon we were back on the old railway ramp, a lovely walk among trees: The next stop was by Lady Catherine's Halt, an interesting building, incorporating a gatehouse and a railway bridge: It was built in 1863, a small board gives more detail about the structure: The entrance to the estate: Closer to Grantown, the path continues through the countryside: After passing a few farms, we spotted a bench and decided to stop here, we were now on the outskirts of Grantown and still had to walk all the way back. It was a warm, sheltered spot, perfect for tea and sandwiches

Returning to Dava took less time, maybe because we didn't stop as many times for pictures. I kept my ears pricked for the sounds of the infamous ghost train but never heard it coming

Maybe this route has to be walked at night, in the pitch dark, in total silence... Maybe then you will hear (or see) the ghost train passing by. Maybe you''ll meet ghostly Dragoons marching across the moorland, getting ready for battle. There are so many secrets, hidden in the beautiful Scottish countryside, and the Dava Way is just one of those waiting to be discovered.
You never know, you might get lucky...

Gordie12 wrote:Hi BP - think you may have an extra 0 on your annual Munro target

somehow it got mixed up.
The Dragoon is new and so sad it's already been vandalized. I don't understand what some people have for brains...
I loved the short climb to the top of Knock

Kevin has similar memories of walking up Brown Willy as a child (his family is from Tintagel). During our last visit to Cornwall we run up it in next to no time, he couldn't believe in the past it took him hours... The world is so different from child's perspective.