I decided to take advantage of Scotrail's £1 return ticket to travel on the West Highland Line to Tyndrum Lower.

Beinn Dubhcraig holds fond memories for me - it was here I went for my first hillwalk. I was in first year at secondary school and we trooped off in football boots and carrying duffle bags! My abiding memory of the day is fording a freezing River Cononish. In fact, the day was so hellish, I wonder why I went back for a second walk a few weeks later!

The train today was on time and the walk starts right at the station. It was a pleasant walk through the forest to the track leading to Cononish and I was glad to see a footbridge over the river! Although the Munros were in cloud, Beinn Chuirn was clear all day. Beinn Chuirn (complete with the eyesore of the mine) Ben Lui hiding in the mist

Once over the river, it was quite a steep pull up to the north ridge, where the gradient eased considerably, so I was able to enjoy a steady walk up to the lochans just below the summit. Heading along the north ridge of Beinn Dubhcraig, with the summit under cloud

As I approached the summit, the conditions brightened, but not enough to yield a view. Not much point in lingering at the cairn, so I turned around and headed to the Ben Oss col. There is a really good path leading down to the col. On the way I could enjoy a lovely view of Loch Oss. Looking down at Loch Oss as I approached the col Near the col as the cloud lifts on Ben Oss The path continues towards Ben Oss, with the junction leading to the summit clearly marked with a cairn. I stopped at this point to have my lunch, with another great view of Loch Oss. Loch Oss from the lunch boulder

Another straighforward walk up to the ridge, with a clear path to follow. I had my old Glen Orchy 1:50000 map with me and was amazed at the lack of detail showing on this ridge, compared to more recent editions - the 941 metre point is completely missing! 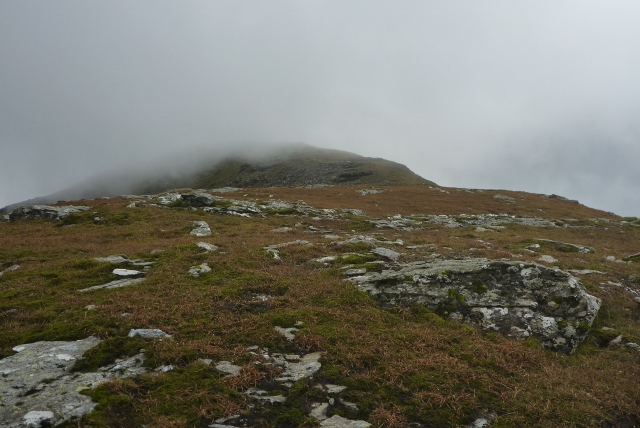 The summit ridge of Ben Oss Ben Lui from close to the summit of Ben Oss

Lots of cloud about at the summit, but enough breaks to give some views. It was a long time since I had been here and it took me a moment to realise that the loch to the south was Loch Lomond! Looking west from the summit towards Loch Awe

I then had the long walk back to Tyndrum. I thought about dropping down Coire Bhuide towards Cononish, but decided to reascend to the lochans and back out the way I had come in. In hindsight, I think that the Coire route would have been quicker. However, as compensation, the cloud had now lifted from Beinn Dubhcraig. The final descent to Cononish was hard on the knees and once there I had to hurry to catch the train. Indeed, I had to run the final section, only to find out that the 17.15 was Saturdays Only! Just as well reading railway timetables isn't on the ML syllabus!

As I now had a couple of hours to spare, I had a meal at the excellent Real Food Cafe, before my train journey home.

A cracking day out on a couple of hills I hadn't been on for years. If I wait as long again for my next visit, I'll be 95 by then!

Just to confirm - there is a bridge over the river now?