Really?? The best walk ever? Well... almost certainly not. But still, I claimed this as we strolled (or should that be "staggered"?) towards the finish of this utterly stupendous walk.

Let us put this into some sort of context. I first noticed these 'three peaks' as I strummed through the brochure of a well-known walking holiday company. "Wow!" we will have to go and see them, I thought. At first glance, this didn't look especially easy. For one thing, it was too far away to drive (or more accurately, for my wife to drive; I gave this up as a consequence of the stroke). Nor did we fancy flying - it would still be necessary to obtain a lift by taxi from Venice airport for 2.5 hours. On looking at a map, I noticed that it was possible to travel to the Val Pusteria by rail. This would involve travelling by train from Amsterdam to Munich. Then proceeding from there to the tiny village of Fortezza in north-east Italy, before finally catching a local train to the journey's end in Toblach/Dobbiaco. Even better than that - when looking at an on-line brochure produced by another walking holiday company, I noticed that it was possible to book a hotel that is positioned almost directly next to the railway station in Toblach/Dobbiaco. Bearing in mind that the village is just a dozen miles away from the Drei Zinnen/Tre Cime di Laverado, it seemed inevitable that we would have to go!

I will cut to the chase at this point. For various reasons, we were delayed in getting to Toblach/Dobbiaco. If I say "shootings in Munich" and "a replacement bus service" I am certain that you will catch my drift. Anyway... we got there in just under 5 hours later than originally planned. The walking holiday was superb - although I have say that it rained at some point on each day we were there. Apart from, that is, on the Friday. Friday was the day we planned on walking the Drei Zinnen/Tre Cime di Laverado trail.

In order to do this, we caught the local bus - which would carry us from Toblach/Dobbiaco to the start of the walk - early, and in just 45 minutes we were there. The first thing to say is that it is/was incredibly busy with tourists and more serious walkers from Italy, Germany, Austria and elsewhere - though, strangely, very few visitors from the UK. Some people may have been put-off by this... but in my view it goes to show the attractions of this place to 'locals'. The area around the Val Pusteria - but especially the Dolomites - is truly stunning!

I will leave the description of the trail there and instead concentrate on guiding you through some photographs.
The attachment DSC00721 (800x600).jpg is no longer available The village of Toblach/Dobbiaco looking more-or-less south to the Dolomites. On our walk, looking down to the village of Auronzo. Looking back to Rif. Laveredo. Still quite a few number of people there... but not for very much longer. The shape of the Dolomites is truly stunning! We thought that we could lose a few people by venturing off on to the long-distance trail. And so it proved! Further along the walk. Looking forward to climbing the zig-zag path in the distance. A way-marker pointing us in the right direction. 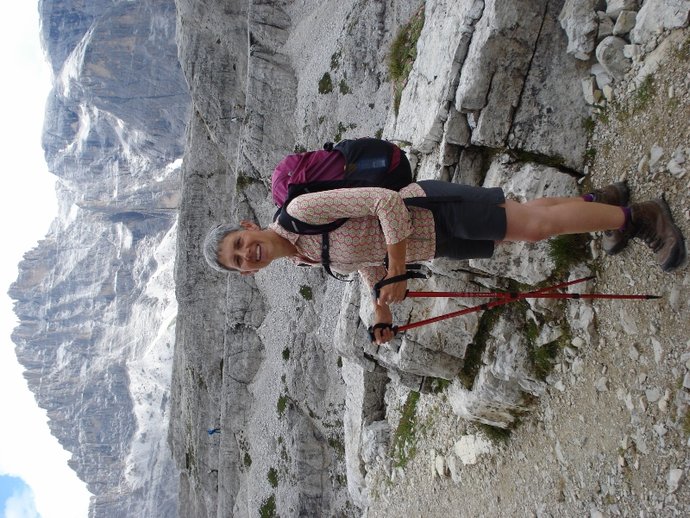 At the top of the zig-zag path. What a better place to sit but a handily placed seat above the Rif. Pian di Cengia at 2528m? This is what we were walking and waiting to see - the Drei Zinnen/Tre Cime di Lavaredo... truly magnificent! After a few minutes of marvelling at the magnificent mountain it was time to be on our way again. We still had quite a few kilometres to go. Looking on the opposite side of the valley towards Monte Rudo. Looking back for the final time at those breath-taking pinnacles.

So, there we are... we finished the walk quite exhausted having ascended and descended for a good few hundred metres. "The best walk eva!"? Having thought of this more carefully since we finished the walk... may be not. Looking towards Suilven from the slopes of Stac Pollaidh would take some beating... but the best walk in Italy? Certainly! We deviated and went to look for somewhere to sit and eat our lunch.

Wow, absolutely stunning, nothing has made me want to visit the Dolomites more, what spectacular pinnacles and the way things are going I may well be living closer to them than my current home in Canada

Fantastic photos of what was clearly "the best walk eva"!!

ChrisW wrote:Wow, absolutely stunning, nothing has made me want to visit the Dolomites more, what spectacular pinnacles and the way things are going I may well be living closer to them than my current home in Canada

Fantastic photos of what was clearly "the best walk eva"!!

Thanks, Chris, for your comments. I hope that it is not too serious - the reason for you coming back to Europe? What am I saying? It must be, at least, quite serious! It would be a tremendous pity to miss seeing your absolutely marvellous photographs of the wilderness of the Canadian Rockies!

Certainly one of the most dramatic walks eva', for sure. Truly sensational! More than vies with ChrisW's pics from Canada.

I need to get to the Dolomites - if only because they're so much nearer...

Wow! Simply spectacular. Those towers remind me of the Paine massif in Patagonia. I have to get to the Dolomites. Last year I read Walter Bonnati's 'Mountains of my life '. He describes cutting his climbing teeth on crazily steep spires in northern Italy just like this. Really great photos.