In the Spring a middle-aged woman's fancy lightly turns to thoughts of camping. Apologies to Tennyson but the recent Spring-like weather has made me feel quite poetic!

It was a gorgeous, warm afternoon as I set off from Inverey with my tent and supplies for a couple of nights camping at the ruined Altanour Lodge in the shadow of An Socach. Signs of Spring were everywhere: frog spawn glistened in every puddle, lapwings wheeled and dived overhead, rabbits scurried about and it was so warm I even had to take off my hat and gloves. An 8km walk brought me to my campsite with plenty of time to get the tent up and cook while it was still light. Later I lay in my sleeping bag with the tent door open gazing up at millions of stars in the clear sky. 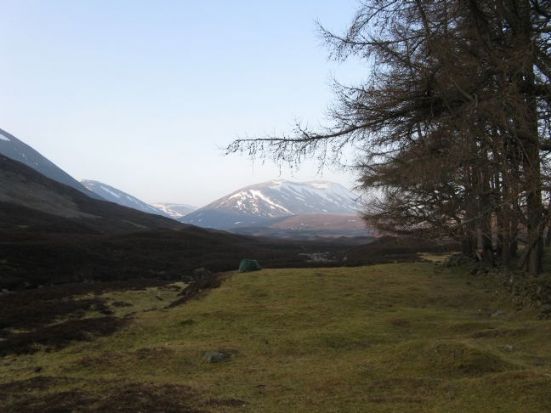 It was light by 6 the next morning so I made an early start on An Socach. It was very cold (there had been a frost) but not as cold as the last time I had camped in the Cairngorms when my water bottle froze solid and didn't thaw completely until I got home. I crossed the bridge near the lodge and made my way through heather to the foot of the hill. A small herd of deer disappeared into the corrie, glancing nervously at me as they fled.If there was a path I didn't find it until after clawing my way very steeply up through the heather and past a few patches of snow I arrived at easier ground. Much more gentle slopes then led to the summit cairn of An Socach. A couple of white hares, looking rather embarrassed at being caught out in their winter wardrobe, lolloped away. Looking into the distance I could see my next objective, Glas Tulaichean. It looked a long way off. 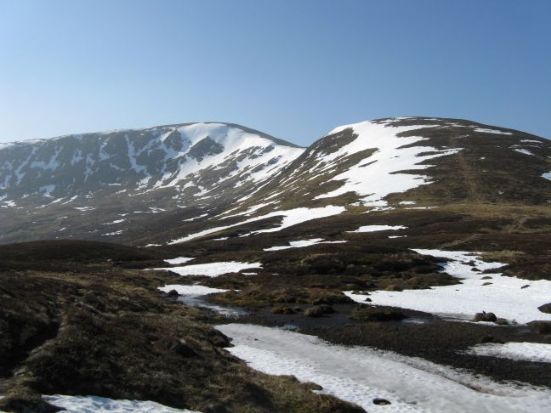 Unfortunately all the height that I had gained was quickly lost as I picked my way down the steep south face of An Socach, eventually reaching grassy slopes and crossing a burn. Climbing again alongside another burn towards Loch nan Eun I met another walker, sweating profusely in the warm sun. Loch nan Eun was a lovely shade of blue and still had large patches of ice on the surface. I skirted the west shore of the loch, accompanied by the cries of the gulls and oystercatchers, and reached the bottom of the north east ridge of Glas Tulaichean. It was quite a long haul to the summit, past large patches of snow clinging to the rim of the corrie. On the way up I met two more groups of walkers, one of which had a dog which kept rolling in the snow perilously close to the edge. I was to encounter the other group several times later in the day. At the summit cairn the wind was very cold so I didn't hang around but retraced my steps down the ridge. 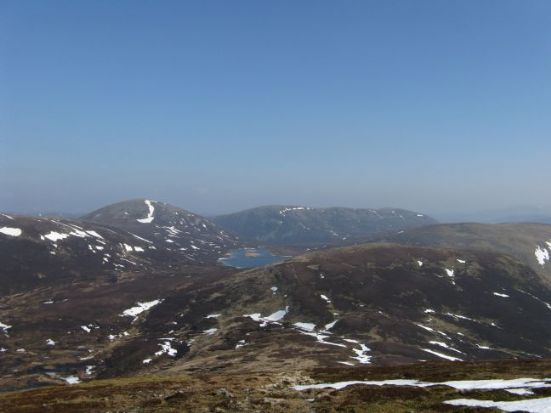 I could see the track that led towards Carn an Righ way below me in Gleann Mor so I dived off down grassy slopes, crossed the burn and joined it. 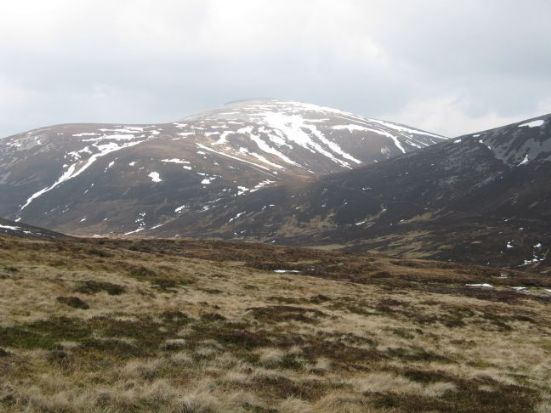 After a quick snack (it had been a long time since breakfast) I climbed Carn an Righ in deteriorating weather conditions - Spring it seemed had finished for the time being.

I reached the summit and found the three walkers I had met before crouching in the shelter of the cairn. The cloud had engulfed us and we could see very little. They set off back down and I sat for a while considering my options. I had intended to include Beinn Iutharn Mhor in my days walk but the poor visibility rather put me off. But it was the most direct route back to my tent. So I decided to go for it. Descending to the bealach between Carn an Righ and Mam nan Carn I toiled up to the top of the latter. The summit plateau seemed to go on forever but eventually I reached the cairn and took a bearing for Beinn Iutharn Mhor. And who should be there, looming out of the mist, but the people I had met before, now reduced to a group of two because their companion had decided to bail out. They just beat me to say "We can't go on meeting like this!"

By now the freezing rain, driven by the wind, was distinctly unpleasant and I walked along the ridge in the direction of my tent. I think it would have been a very pleasant walk on a nice day with great views but I saw nothing at all until I reached a huge cairn beyond which the ridge started to descend gradually. The final steep drop to the glen was achieved by means of a narrow zigzag path and then I followed various tracks through the heather back to Altanour. Spring had returned by this time but I was glad to be able to make a nice cup of tea after an excellent day out.

Up early again the following morning I walked out to Inverey. Now, next weekend ......

P.S. It wasn't a good day for photos, rather hazy at first and then very poor visibility.

Enjoyed that one - Spring did seem to come and has now gone again. Good way to climb those hills all as a group with a camp.