Instead of all the usual "New year-new me"-ideas, I stayed pretty much the same as before. Walking around in nature with my adventure buddy Jet has always been something I have enjoyed, and ever since we moved to Scotland, I have wanted to climb Tinto hill with him. Of course, as there are risks in hill walking, my parents hadn't let me go by myself, as they thought, that there wouldn't be many people on the hill just like I imagined too. So, it took about a year and a half until I actually got the opportunity to climb a hill in Scotland - the last time being when I was here on holiday with my family, and we visited Alva Glen. This was my first time to walk a hill "properly" - all the way to the top. 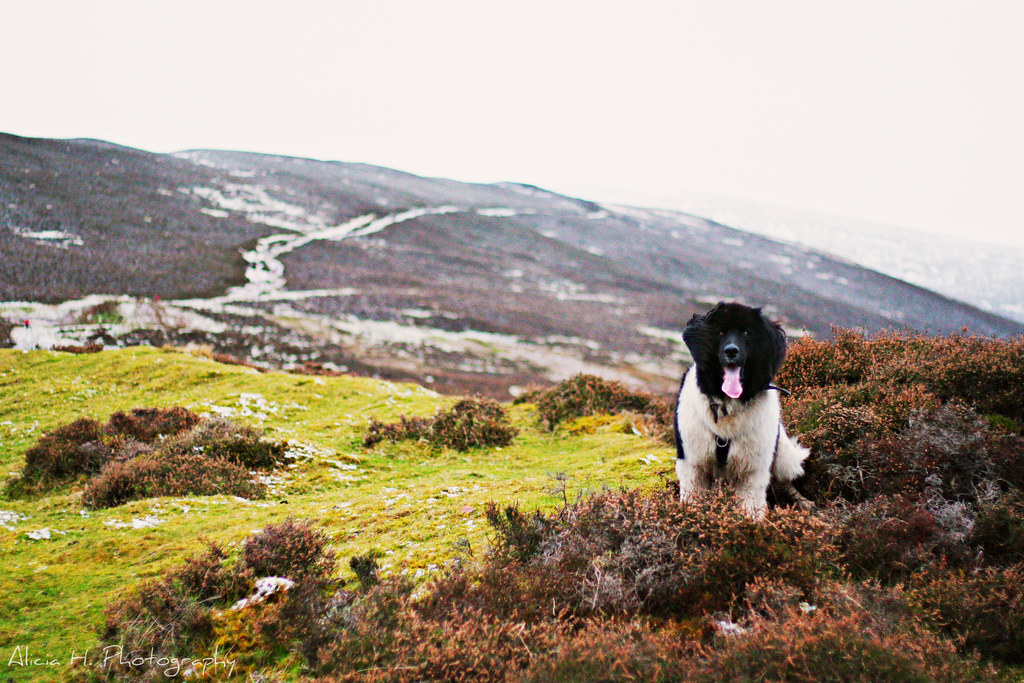 When the Christmas Holiday came, my friend from Finland was over visiting, so I convinced her to climb Tinto with me and the mutt, as I needed someone to walk up the hill with to get consent to do it. We left the house a bit late, when you keep in mind, that it was winter, and the sun set at about 4pm, but we still had time to walk up it, when starting our hike at about one o'clock.

Jet was, as usual, very excited to get to go on a hike once again. When we got out of the car, and I was adjusting my hip belt, he was already running in circles from excitement, as this is a habit he has, when he is happy. Eventually everything was ready, and I connected Jet to my belt with a bungee line, and off we went. 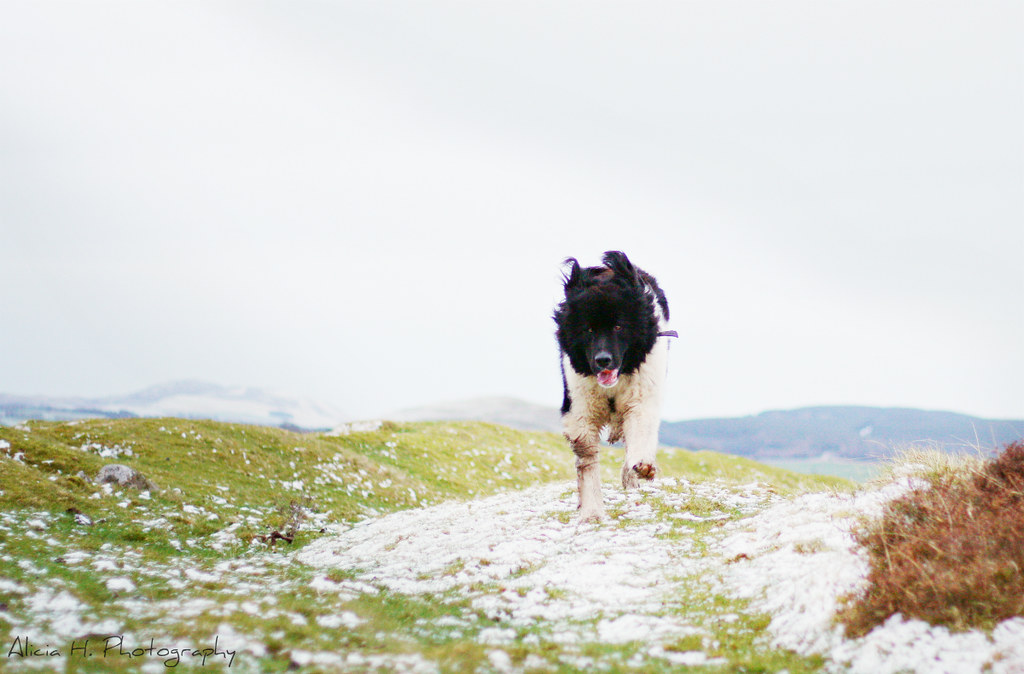 At the start of our walk Jet wasn't really concentrating on walking nicely, and was instead moving constantly from side to side on the wide path, that is at the beginning of the route. Eventually he started to calm down, as he understood, that he had to behave like on our usual hikes. After that he was being a very obedient landseer, and focused on avoiding the muddy puddles and icy bits even though he loves to get muddy. He only avoids them, when he is hiking or running with me, which I appreciate, as then I am at least remotely less muddy than what I would be if we took the more mucky route.

We had several pitstops during our walk, as neither me nor my friend were used to walking up hills, so it was a bit tiring. On the first breaks Jet was a little bit of a nightmare, as he wanted to run like crazy and hop around in circles around me. I soon figured, that it was best to let him play fetch, so that he wasn't constantly in the way. The higher up we got the hill, the more Jet calmed down, and the better he behaved during our breaks. He would mostly mind his own business, and run around eating snow, when I drank some water to recharge my batteries. I offered Jet water, but he was too occupied with playing with his toy to want any. 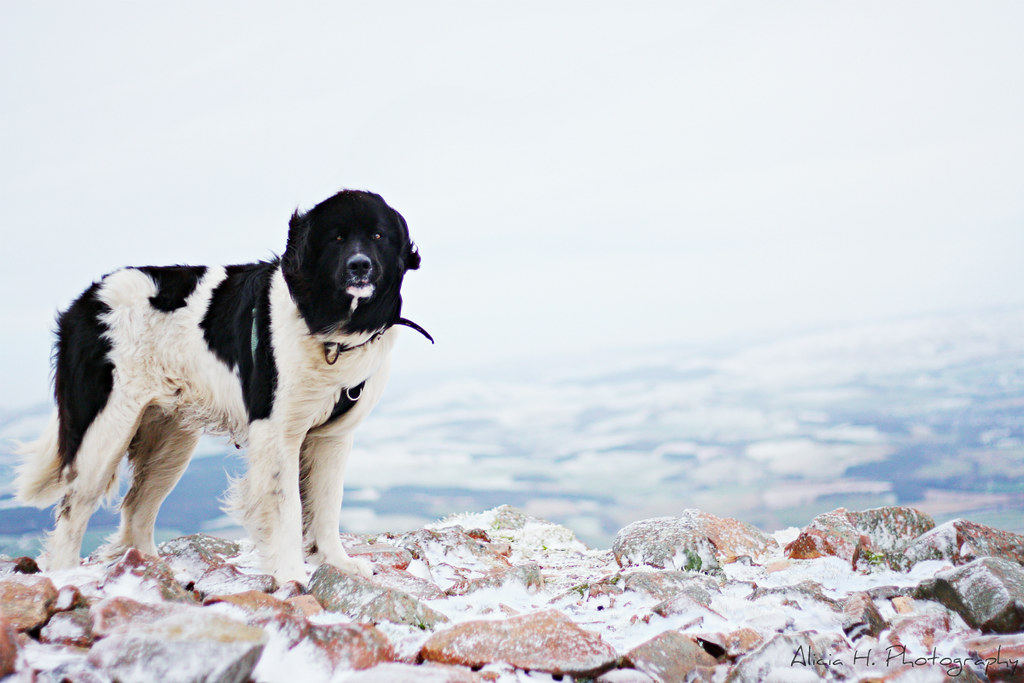 As we got closer to the top of the hill, the routes started to get more slippery and icy, but Jet was helpful, and avoided walking on the more dangerous parts of the path. He is a surprisingly considerate dog even though he is a bit crazy and always slightly hyper. Mind you, he is only considerate towards me to be honest, and will only do stuff if I tell him to. He's a one girl's dog, and I like that.

After we had walked about two thirds uphill, my friedn and I swapped Jet around, so that he was pulling my friend up the hill in his harness instead of me. He seemed to take his job very seriously, as he was concentrating on walking up the hill 100%, unlike when he walks with me and wants to do heelwork and stare at my face (he's daft). Of course, it took him a while to get used to someone else walking behind him, and at the start he only wanted to walk next to me (so I had to speed-walk up the hill...), but eventually he realised, that I wanted him to focus on walking in front, and after that he was totally focused on his job. 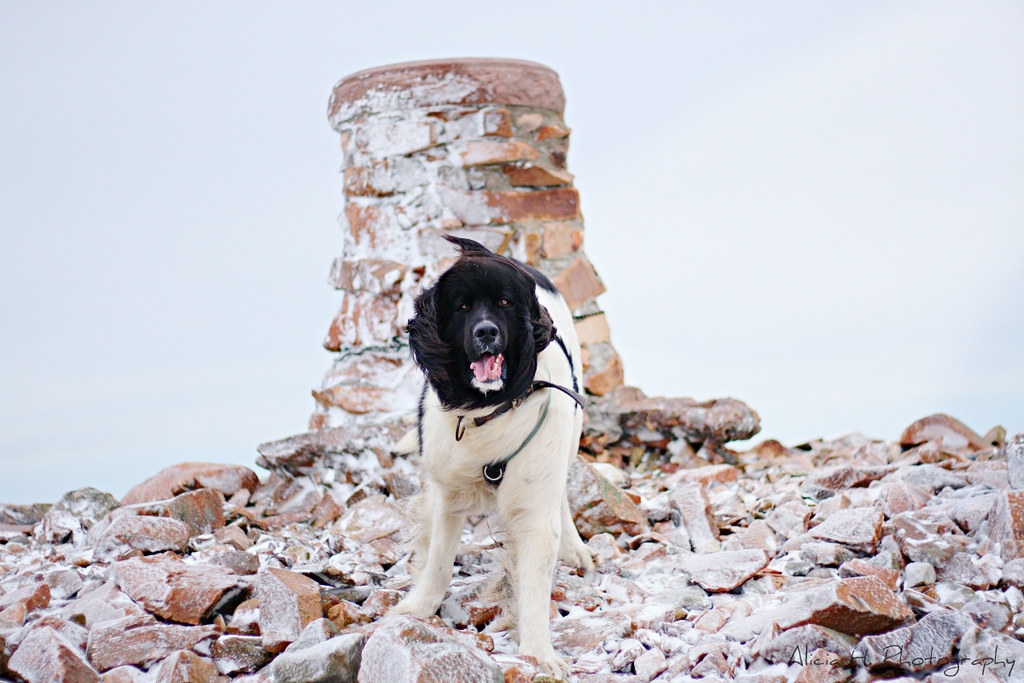 When we got to the top, well next to the big pile of rocks, we had to wait a while before walking to the highest point of Tinto, as there were two very tiny dogs on the top, and I didn't want to have to dance around in the wind trying to keep an eye on three dogs running around. Eventually we got to the top of the hill, and I shared some of my snacks with Jet, as I hadn't had the time to eat them earlier, because of Jet being in his hyper mood.

It was very windy at the top, even though the day was otherwise very calm. Jet being his usual self, got ready to pose straight away, when I took my camera out my bag, as he loves to model in my pictures. He'll not even need proper instructions any more - its simply enough for me to look somewhere or wave my hand in some direction to get him to pose. He even adds his own ideas to the photos with sudden head tilts, and trying different poses. He was no different in the wild wind, and did his job perfectly once again. After the photos had been taken, we rushed back down the way, as it was freezing cold at the top. 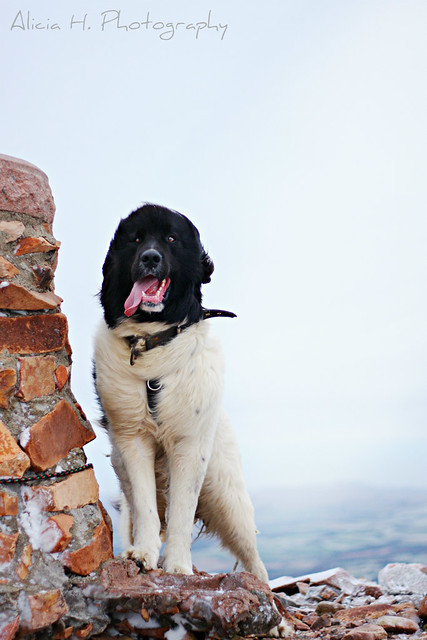 The way back was much easier, than the way up, but you did have to watch out for ice so that you didn't trip. Jet was mostly off leash, as he was in a hurry for no reason whatsoever, so I didn't want to be connected to him by a bungee line and risk my own neck having to run down a snowy hill just because Jet might suddenly want to do so. Even though Jet was very energetic, he still listened well to my commands, and didn't run off.

Before the sun had set, we made it back to the car park, and waited for my mum to pick us up. Even Jet started showing signs of being tired after the adventure in the car. The trip up Tinto was definitely an amazing experience, and Jet and I are going up there again. It was much busier than we thought, so I'm now allowed to go up there alone in good weather. Jet'll either be ecstatic or run for his life when we get to the car park. We'll see...

A lovely recound of your walk up Tinto. Two questions: was your dog off his lead for most of the walk and, two, what type of lead/harness do you use when you walk?

feemackenzie// He was both on and off leash depending on the amount of distractions near by (ie. sheep), so when they were close I put him on a lead just for courtesy really. Most dogs I see there are off lead, so it is suitable for off leash walking if the dog isn't distracted by sheep. When hill walking I use his canicross bungee line (zero dc, about 2.5m when fully streched) and usually he wears a Topcanis salon control harness. Sometimes he goes hillwalking with his x-back harness, which is better if he is pulling on the lead, but it's not that great off leash.