With temperatures plummeting and high pressure all over the UK at the end of November I spied an opportunity for a weekend in Snowdonia. The day of my departure from London I received news of a job offer in Brussels which I have since accepted. Now that the compass points south, it might be a while before I get back to north Wales or Scotland.

My objectives for Friday were the trio of Hewitts to the east of Cadair Idris, including Maesglase. I set off from the parking spot on the A470 climbing steeply up the northern slopes of Cribin Fach. The weather was clear and bright but very windy. The first summit of Cribin Fawr was reached quickly enough. The top is flat and unremarkable but provides great views in all directions, with Cadair Idris dominating the view to the west. To the north I could see the Rhinogs and Moelwyns and beyond them the snow-capped higher peaks of northern Snowdonia. 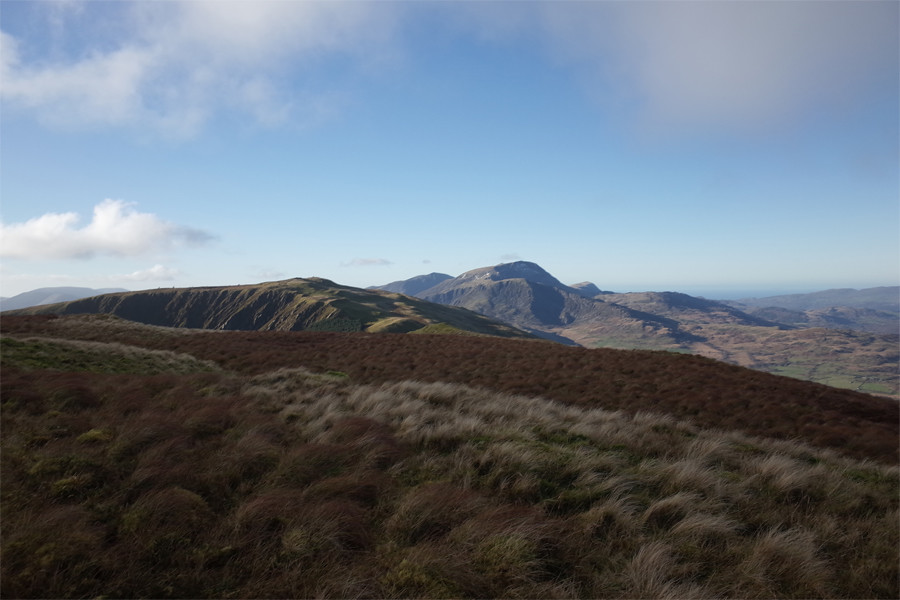 My route continued westwards to Waun-Oer. I had underestimated how steep the descent and re-ascent would be to reach this second top, crowned with an impressive trig. I was soon retracing my steps to the fencepost and boundary stone near the summit of Cribin Fawr to begin the long out and back trek eastwards to Maesglase via Craig Portas. This section felt like a slog at times, with patches of very boggy ground. However, the sun was shining and I had the hill to myself so can hardly complain. From the eastern top of Maesglase I could see how enticing the line of descent to the south east would be, passing the steep cliffs of Craig Maesglase. However, I had read poppiesrara’s helpful report about the trudge back along the main road and wanted to avoid that at all costs so turned back to retrace my steps for a second time. 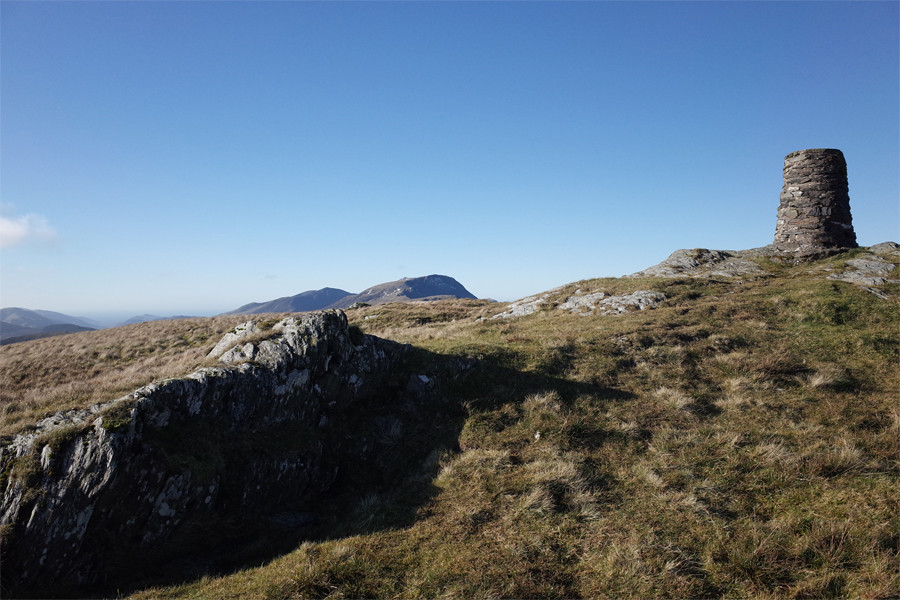 All in all a very pleasant day though the route would undoubtedly be improved with two vehicles, leaving one at Dinas Mawddwy, permitting a descent from Maesglase to the east. 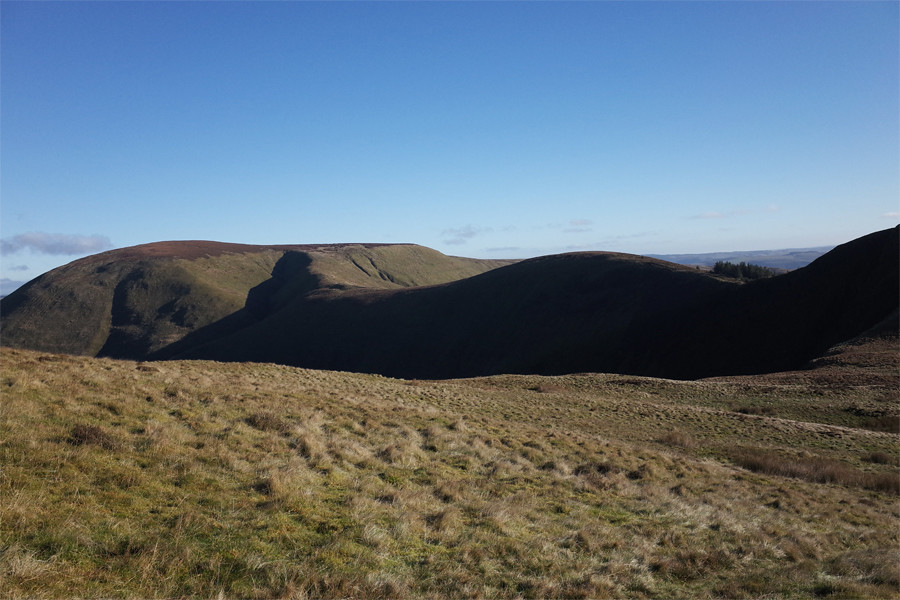 I spent Friday night in Betws-y-Coed and on Saturday met mountain guide Paul James in the Ogwen valley bright and early. I had heard good things about Cneifion arete and we made this our objective for the day, accessing the base of the climb via the Idwal staircase scramble and Cwm Cneifion. 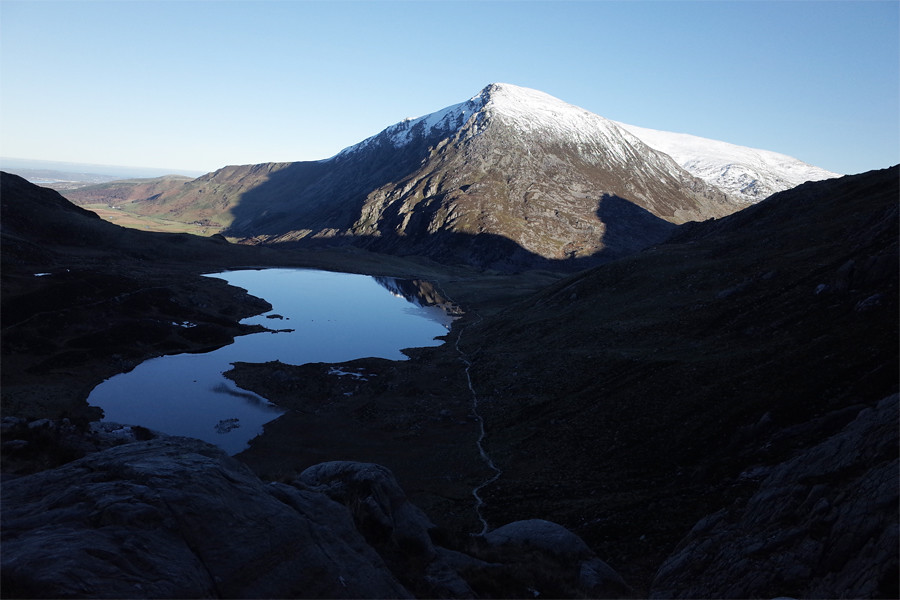 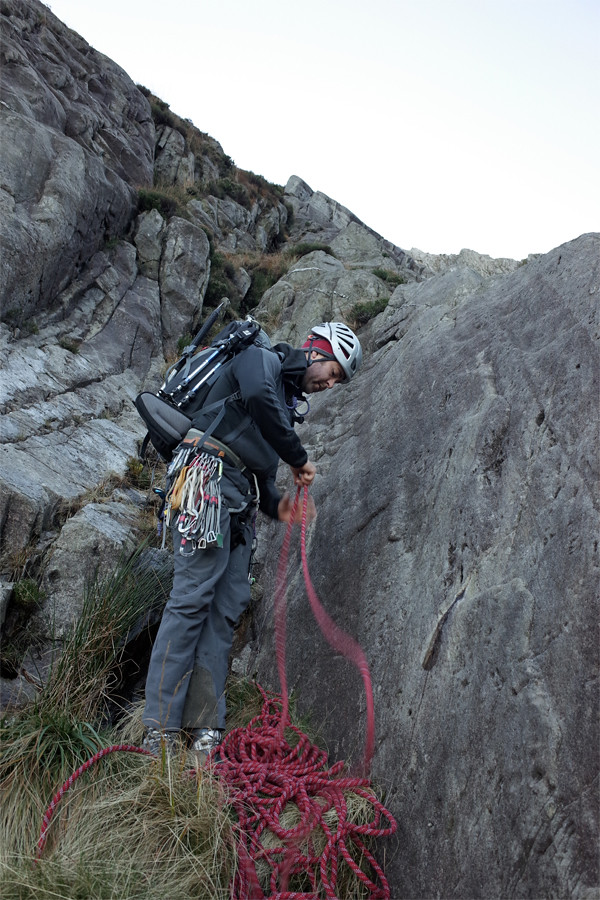 
The scrambling at the start was great fun. We pitched most of it before unroping to walk across a flatish section of Cwm Cneifion to the bottom of the Cneifion arete. Here we roped up again and began the climb which very much deserves its three stars. The climbing is never too difficult (there was one small chimney section I found a little awkward) but the exposure is immense. Towards the top of the knife-edged arete the rock was glowing in winter sunlight. Looking straight up I could imagine I was in the Alps but looking back down the route and out west to Anglesey and the sea, there’s no mistaking the location. North Wales is just the ultimate mountain playground for short weekends from London or the Midlands. Road access is great and within no time at all from your parking spot you can find yourself on really exciting terrain. 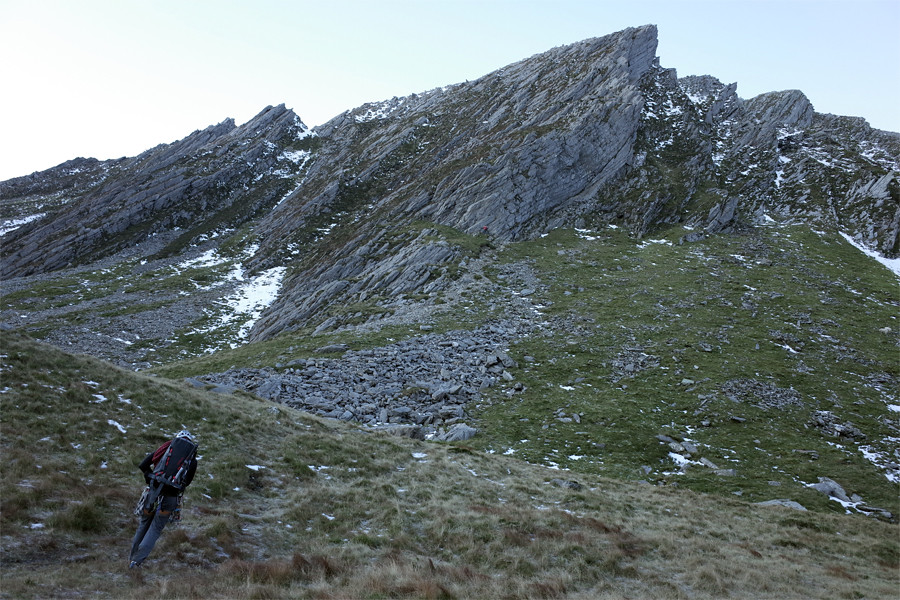 Approaching the Cneifion arete, note the tiny red dot (climber) at the base of the climb 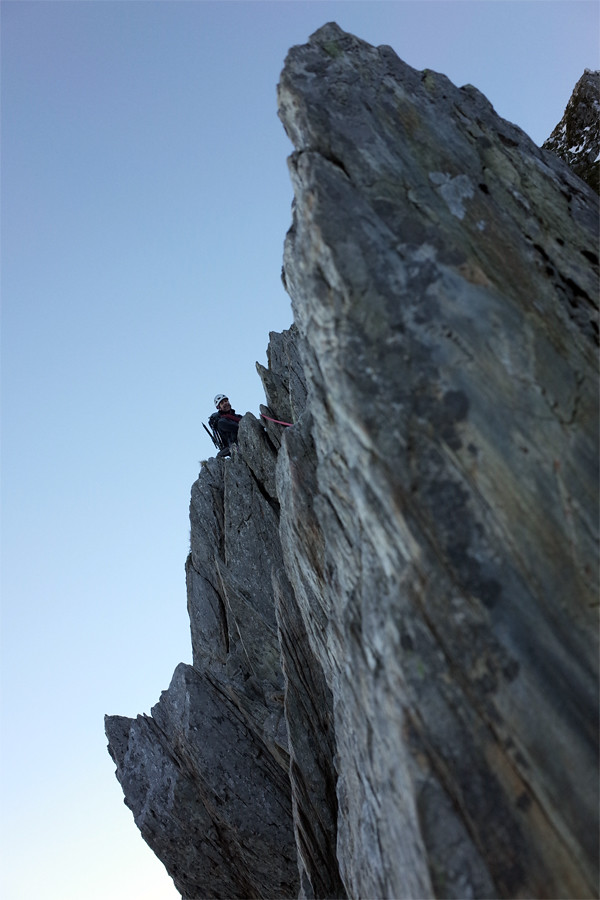 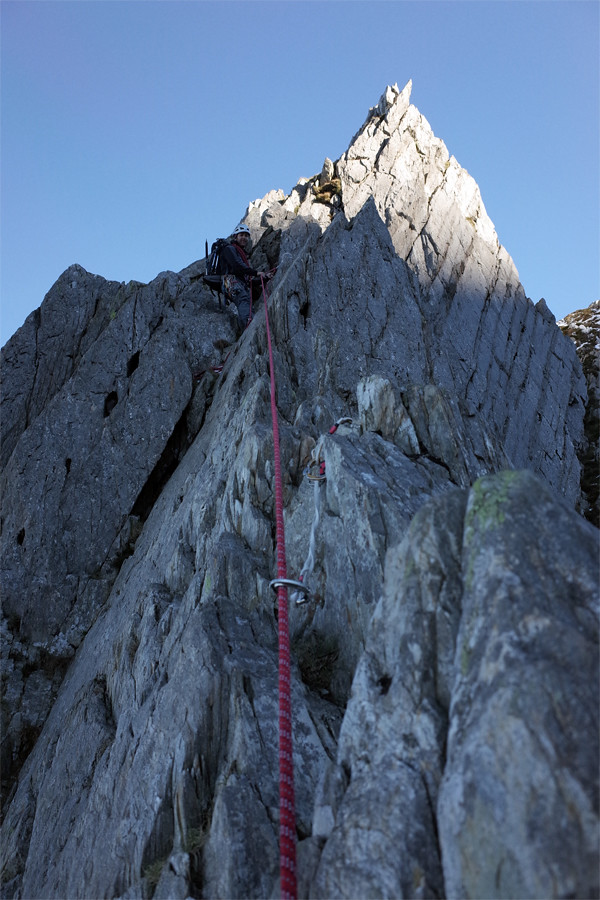 
Reaching the top of the arete it was time to don crampons and grab our axes to complete a snowy and icy ascent of Y Gribin and then westwards to Glyder Fawr. I enjoyed a great view of Glyder Fach and was struck by how precipitous is the drop from Castell Y Gwynt. I scrambled up that top last summer and when standing on the top had no real sense at all how ‘close to the edge’ its northern flank sits. 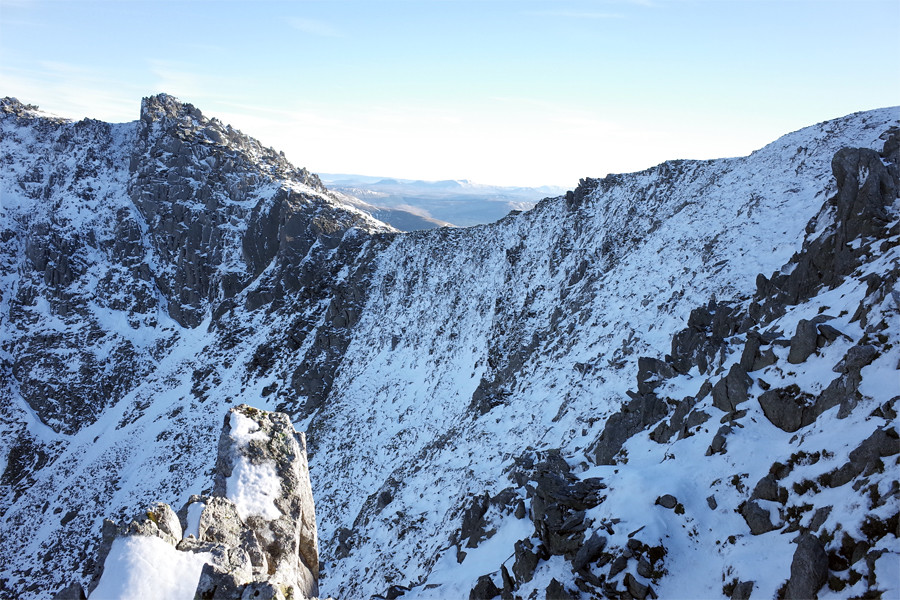 Heading towards the summit of Glyder Fawr we passed a number of other groups but not nearly as many as one would expect to find enjoying such spectacular conditions on a winter weekend. I didn’t bother ascending the final metres to ‘touch the top’ of Glyder Fawr. I’ve bagged it before anyway and the more time I spend scrambling and climbing I’m beginning to appreciate that my experience of the mountains can be measured in different ways from ticking lists or obsessing over reaching high points. This is undoubtedly good for me. Although I’ve climbed Glyder Fawr before, reaching it via the Cneifion arete gave me an entirely new perspective on the mountain. It really was like climbing a different mountain altogether. 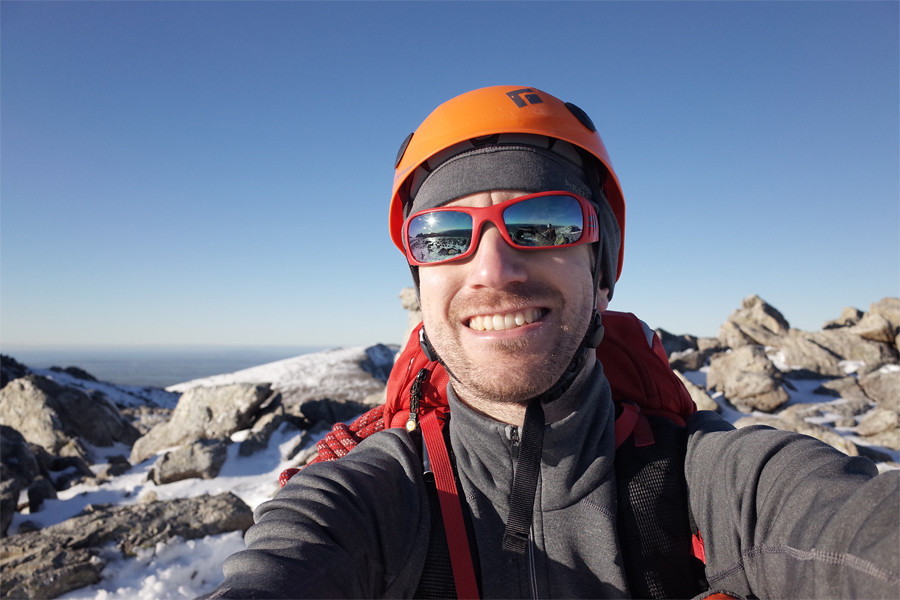 Not on the summit but still smiling 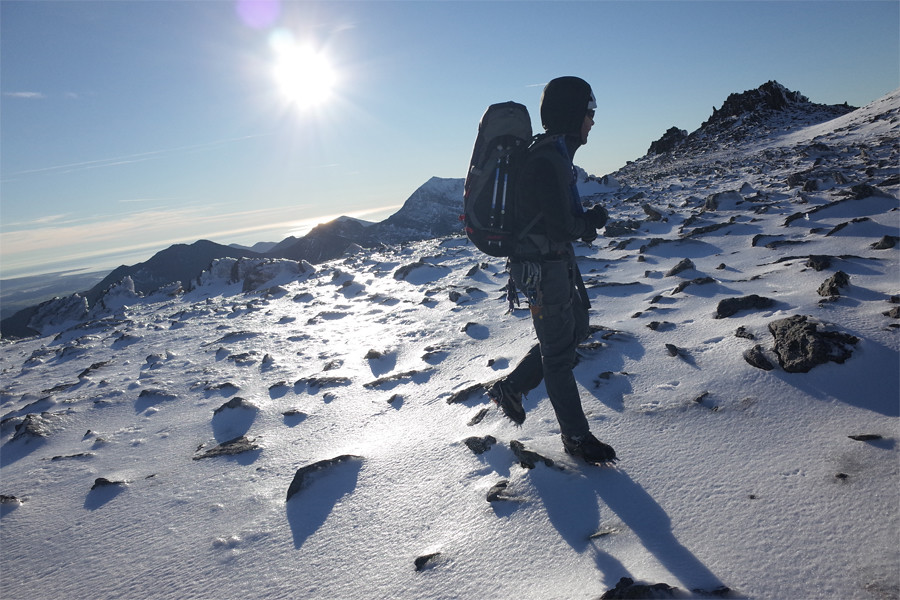 Paul James, Snowdon in the background

Our descent via the Devil’s kitchen was familiar and in what seemed like no time at all we were back at Llyn Idwal and then the cars. I spent another night in Betws, filling up on bangers and mash and plenty of Snowdonia ale in the much improved Pont y Pair inn opposite the chip shop. I always sleep well after a big day out in the hills and Saturday night was no exception. 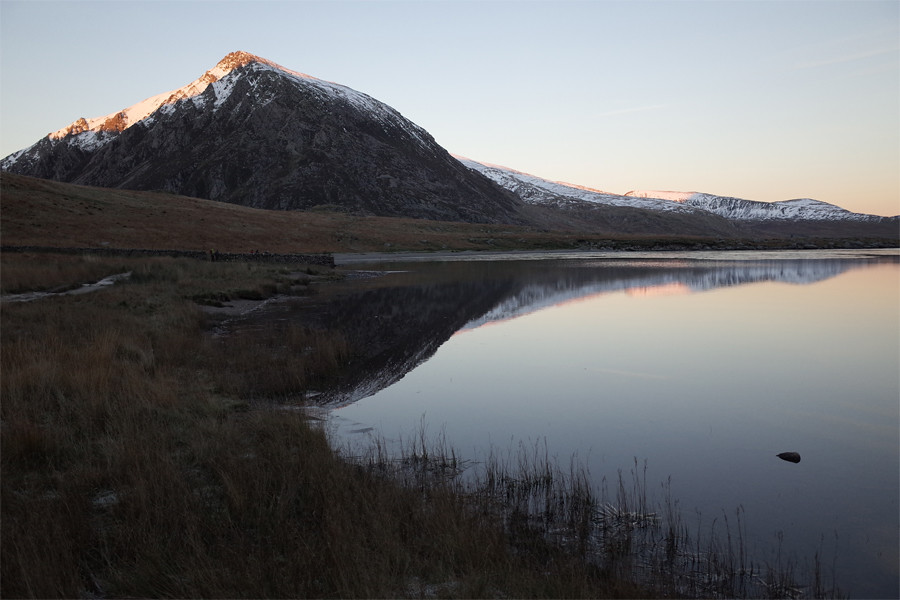 Sunday morning I gave myself half an hour or so browsing through the maps and books in the different gear shops in Betws and walked away with a great little bargain. “Summits for all - the French Alps”. This pre-internet era tome was marked down to £6.95 but had been further reduced to £2.50 at the till. Bargain! It lists various single day routes on peaks below the glaciers in the French alps, so really offering routes more akin to a day in the British hills and safely achievable in summer conditions without glacier crossings. Given my imminent move to the continent I hope it will come in handy next year.

I have still not decided what to do with the time between winding things up in London at the end of January and starting my new job in Brussels in March or April. I could spend a few weeks up in the Highlands doing some winter munros or possibly head to France and explore some of the winter mountaineering possibilities at lower elevations in the Dauphine alps (Belledonne etc.)

Leaving my life in London is undoubtedly going to present me with stresses and challenges. But time spent in the mountains has helped me to look at life in a different way. Sometimes in life the familiar can be like a comfort blanket. When you’ve done the same job or lived on the same street for 10 years it can be difficult, or even frightening to embrace change. But any of us that enjoy the mountains know that sometimes it’s good to step outside of our comfort zones. I’m swapping one north European city for another, not climbing Everest - but to make the transition as successful as possible I’ll need to call on the same spirit of adventure that takes us up into the mountains. Hopefully, with Brussels as a base, I can return to the forum in a few months with walking reports from the Ardennes and perhaps even a bit more from the Alps as well.

maesglase.GPX Open full screen  NB: Walkhighlands is not responsible for the accuracy of gpx files in users posts

Hi Riverman - it was your report on Cyfrwy that motivated me to go and do that nice climb (I'd never heard of it before) - so thanks for that.

Ref this report: Ogwen is a great area for climbing and scrambling - the Idwal Slabs and Cneifion Arete were one of the first scramble routes I did, and with the latter being at a decent altitude you sure get some great views if the weather is good (and a good adrenaline shot on the Idwal Slabs!).

Hope the move to the continong works out for you, and you get lots of good time in the Alps.

Thanks AK. If you ever want to do some stuff in the Alps give me a shout.

Interesting report; brings back fond memories of Cwm Idwal. Cneifion Arete looks superb - better than anything of that sort in the Lakes! Must get back to Snowdonia again...

As someone who moved internationally 10 years ago, and 5 more times since, I think I've embraced the change almost as often as I want to

I know how hard it is to lose your support network entirely and have to start over again and again, even though Brussels isn't geographically far from home it will often feel much further. I wish you all the very best with the move mate, and look forward to seeing your posts from the exotic areas of europe.....I'm only a little jealous as we were very close to being europeans again a few months ago