There had been a cold snap, the temperatures had fallen dramatically and the air had a sense of snow in the wind. Like most hill and mountain lovers in Scotland I was watching the mountain forecast praying for the whiteness to appear. Like magic it, did coating our highest ground in snow in a very short period of time, I needed to hit high ground whilst I had the chance. Normally we would be waiting well into March/April next year before any real snow falls however it was only mid- November & I was already packing my winter gear, Ice axes and spikes….. Time to get high I decided to head for the Lawers range, it was close by, within an hour or so drive, the shout went out and before long Andy & Chris were tagging in. the intention was to set off in the dark and at least be approaching the summit for sunrise….. Eager to watch Dawn over our mountains. What I had forgot to factor into my time schedule was the possible ice cover on the road on the way up to the car park, I should have realised though as it’s a road I have travelled many times, three quarters of the way up and the vehicle hit ice, Andy had already txt earlier to say he had had to pull over and was in one of the passing places approx 300metres from the car park. I decided I would park lower down and tab the rest of the way up with Chris to meet Andy who was now in the process of fitting snow shoes to his tyres. We decided at that point we would abandon the cars, get the gear on and start or tab. Boots were on the ground for approx. 06:30 with Sunrise scheduled for 08:10 already we were under pressure to be on the summit for the sun coming up. Head torches on we set off at a reasonable pace however watching each other slip and slide on the thin coating of ice on the road, we eventually reached the point to turn off the road and work or way through the reserve. The ice was hard underfoot however there was enough soft low lying snow for the boots to sink into allowing a descent pace. The sky was pure blue, that cold looking Blue but the one you know when the sun rose it would be a crystal clear day with views for miles, the kind of day we long for in our Mountains. We continued our way up Beinn Ghlas all the time watching the horizon, eagerly waiting for the pinkness of the sun to burst through but all the time hoping for it to take it’s time, we wanted to be at a good height to ensure the filming for youtube and the pictures would do it justice. We were not to be disappointed, over Meall Nan Tarmachan there was a thin Purple/Pink haze hovering over the Blue sky and off to our right over Loch Tay you could see the sun starting to appear, a stunning Orange & Red glare starting to appear on the horizon, made even more stunning as it met with the pure white of the snow on the Mountains that surrounded us. 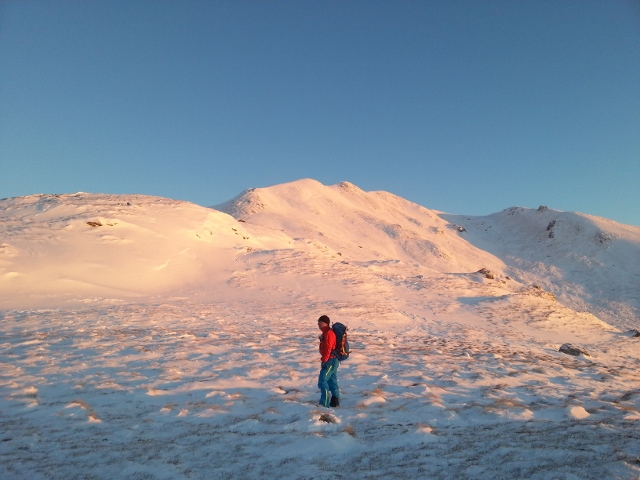 Each step was taken and more pictures were snapped, as the sky lightened it opened up the wonder of Scotlands Mountains which surrounded us. Very rarely you manage to catch Ben More & Stob Binnien clear of clouds yet there they were in the distance, Ben More looking Majestic as it towered over Crainlarich. It was at that point I made the decision that tomorrow my shadow would fall on Ben More. 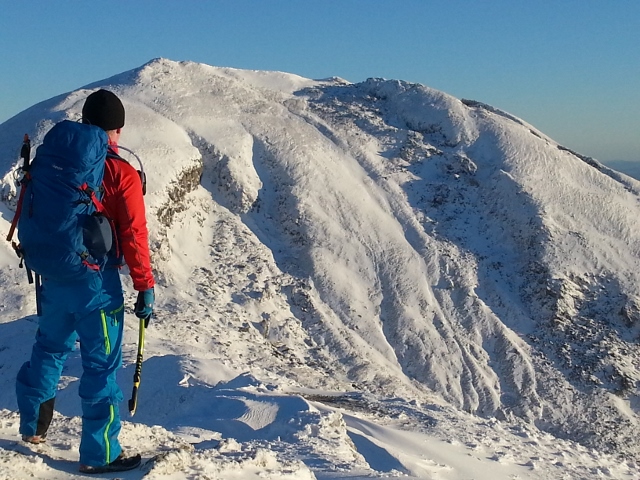 The snow beneath our boots had taken a freeze during the night however not enough that required the need for crampons, we managed to reach the summit without the need for spikes. The climb itself had been everything we had been talking about for weeks/months, constantly on facebook sharing pictures of last years epic winter climbs and talking about the targets for this year. This had been a tester, getting used to carrying the heavier gear, a shorter day out than normal but just as magnificent a day we could have hoped for in scotlands mountains. Summit time was filled taking in the views, taking more pictures and filming for my youtube channel. Once completed we took the time out to enjoy some lunch and take in the views, shoot the breeze on how the climb had went and how the sunrise had surpassed our expectations, If you haven’t already then you need to plan a day where you are on a mountain for the sunrise, only then will you understand.

I have said many times before “Nobody Get’s Us” they ask questions like “Why Do You Do It” Then in almost the same breath they say “Your Pictures Are Stunning” That’s why we do it. Stand on the summit and watch the sunrise, watch heaven open up………

You're right - when people ask you why you do it, the photos give them the answer, don't they?

I managed to miss all the great November snow and weather, so thanks for that

You're right - when people ask you why you do it, the photos give them the answer, don't they?

I managed to miss all the great November snow and weather, so thanks for that

Hopefully more of the white stuff hitting soon, you can get your fix

You bet its time Ally, Glencoe is already getting battered from what I can see

Definitely time PerthAlly. I don't do anything too extravagant, but it's great to get out on a snowy, frosty hill and enjoy the views from a completely different perspective.

The smaller hills are every bit as enjoyable as the bigger ones, and you often get the best views