The Cuillin Fear
When I think of the Black Cuillin I do feel fear….it is a physical and slow growing fear that starts in the armchair with the SMC book and the OS map, builds with the journey through Glen Shiel and Sligachan, and approaches a scary crescendo as I begin walking up any of the Cuillin corries. A debilitating sensation through legs and groin and a weakness of will that stops adrenalin in its tracks. Not sure what vertigo is, but it sounds far too exotic a word for being scared s***less. So I just call it fear.
It is said in many sports that the game is played with the top inch of the body. So it is for me with heights, when perception rules. Even in photographs, a camera lens pointing anywhere other than downwards can be a fine photo, but if it includes any precipitous aspect, the physical sensations begin.
I wish I could settle for the large and beautiful plateau and corrie bites of the Cairngorms and the whalebacks of the Monadhliath. Truth be told I should spend my days among these easy leg stretching hills that contain many of my favoured walking areas. However, I still harbour a deep, though probably forlorn, wish to compleat and also have a sense of being a gutless mountain wimp unless I can dangle dangerously 3000 fresh air feet above something terminally hard.
With banal stereotypical prejudice, I have always viewed Weegies (‘Glaswegians’, for the uninitiated) and west coasters in general, as harder bitten, more street wise and with more of an ‘edge’ than their Scottish east coast counterparts. (I admit happily to being one of the latter.) Likewise with mountains, those rocky west coast Sgurrs and Ciches rising in steep walls from Coruisk, Hourn and Torridon leave me craving my cowardly Cairngorms. The Cuillin, the edgiest mountain range of all.
My good friend Malcolm has escorted me up Bruach Na Frithe which I trembled all the way up until I decided on the way down that it was actually quite easy. Likewise with Sgurr Na Banachdich, which I again thought was particularly easy as I descended, not to mention the blind terror all the way up. Malcolm is a munroist who is comfortable (and unknowingly smug) enough to refer to the Cuillin as ‘hills’, whilst I see them as serrated-knife-edge-plunge-inevitably-to-your-death-mountains. I love and hate him, and returned with him to the Cuillin on 25th May 2010 when we took on Sgurr a Mhadaidh and Sgurr a Ghreadaidh – hereafter known as Vati and Greta
Opposite the Glen Brittle Hostel is a nice start to any day out, 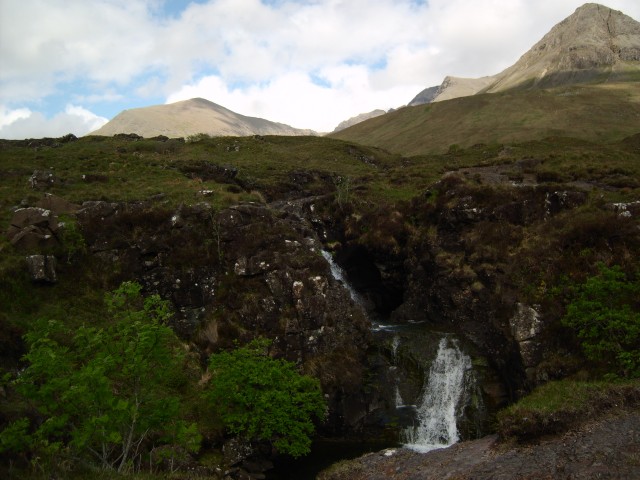 with pleasant walking up the Allt a Choire Greta into the higher reaches of the Corrie with An Dorus in view for most of the walk-in. 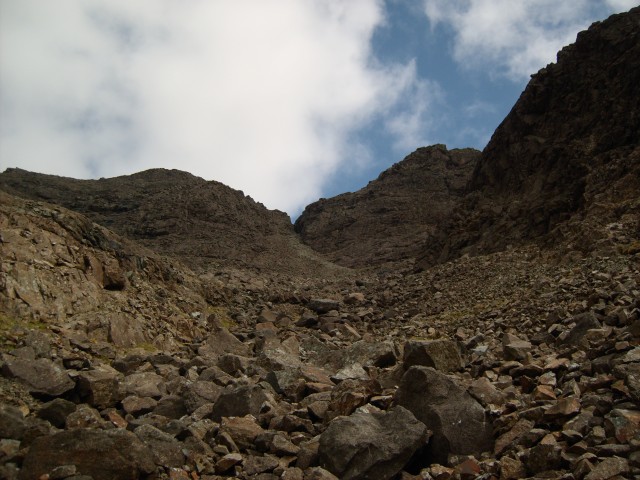 I warn Malcolm en route that I may cop out at any point, as I am already feeling quite fearful, indeed panicky. He retorts confidently ‘och its not as bad as you think – you’ll be absolutely fine’. The fear wants to scream out that “I want to decide what is fine and not fine!”, but I stay silent and increasingly fragile as we scrunch up the scree to An Dorus. 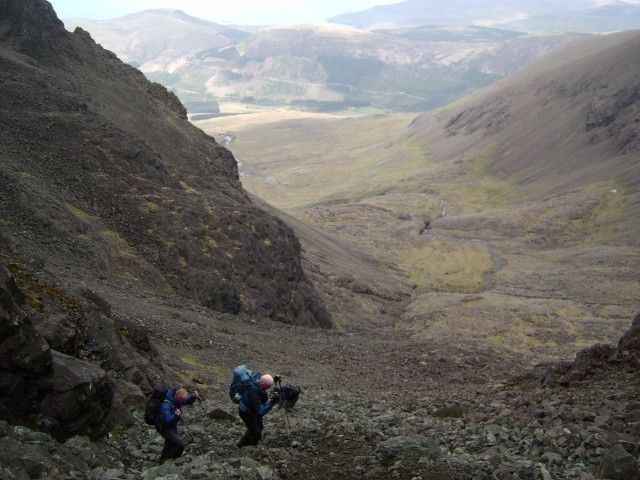 Reaching An Dorus I cuddle this protruding rock - not simply to be closer to nature, but more out of sheer terror (I have a habit of finding protruding rocks to cuddle as comfort blankets). 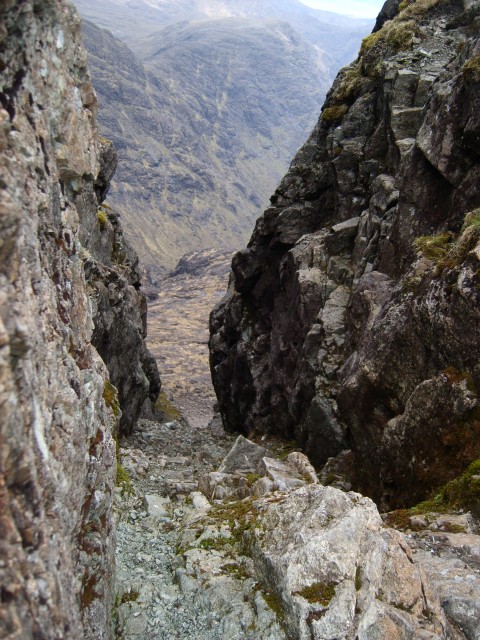 We consider the route of ascent from An Dorus up Vati. It is a slanting gully several yards past the crest of An Dorus, down which a gentleman (more elderly than me) and his partner (very much younger than all of us) are scrambling with all the agility of a one winged seagull. I was already thinking how to cop out, and the delay while they descended increased my sense of panic exponentially. Two courageous weegies joined us at An Dorus –they were obviously mountain-wise and helpful and, witnessing the laboured scrambling before them, offered the young partner the use of a ‘sling’ for her descent. In the event she did not need this aid, but somehow the notion of people needing ‘equipment’ on Vati just about finished it for me. Malcolm had not brought a sling, nor carabiners, nor ropes, nor indeed a microlight or other necessary accoutrement - sorry Malcolm, can’t do it, great experience getting this far, but quite enough for the day, don’t feel bad just because you have failed to adequately equip us for this complex mountaineering expedition. I was about to be effusive in acknowledging Malcolm’s shortcomings. However, Malcolm, by now echoed by the two weegies, cajoled, encouraged and nursed me up the gully, on to the slopes of Vati for easy scrambling to the summit, easy that is unless you are already terrified to the point of distraction and cannot focus on the fact that there is almost no chance of hurtling to one’s doom in any direction! Taking a couple of piccies at the top with my ‘cheap-and-cheerful-nikon-idiot-proof-point-and-shoot was awkward as I had to let go one of my hands from my new-found protruding rock comfort blanket. The achievement was as breathtaking as the view. 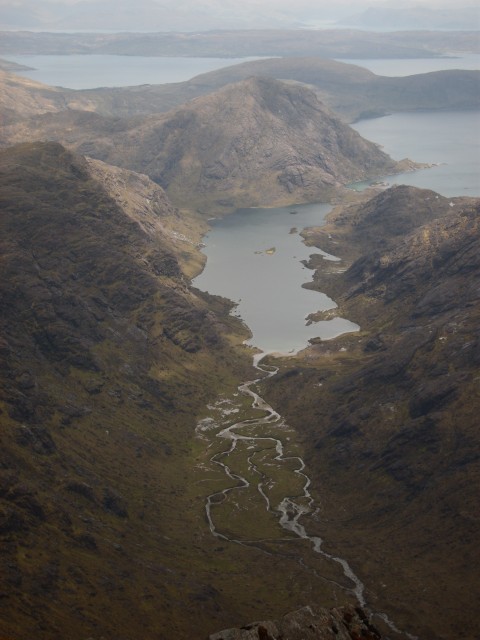 I have to say I thought I enjoyed scrambling down to An Dorus – my fear tempered by knowing I had already managed this bit. However, the picture tells more the story of a still traumatised scrambler. 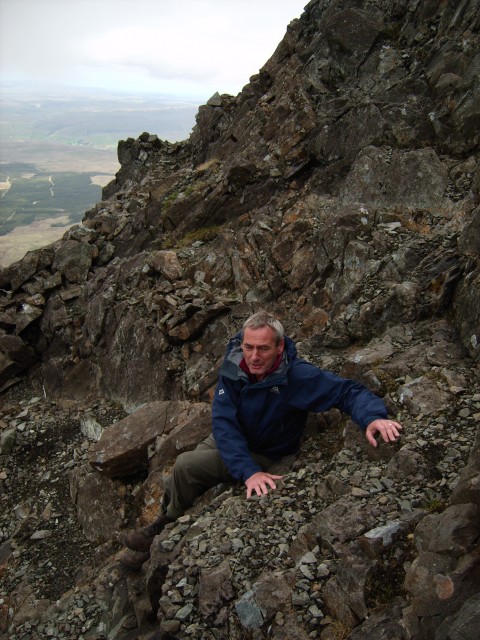 Back at An Dorus, Malcolm and I celebrated the defeating of this particular day’s Cuillin demon. However, the adrenalin of Vati was not sufficient to persuade me up Greta, even on such a great walking day my emotions were spent. As we descended from An Dorus I knew I would always match the exhilaration of my victory over Vati with the regret over Greta, but I also know that I can manage Greta when I return – that is a reassuring feeling for a real mountain feartie. However, I think the best feeling of the day was that, for my friend Malcolm’s sake, I had not copped out 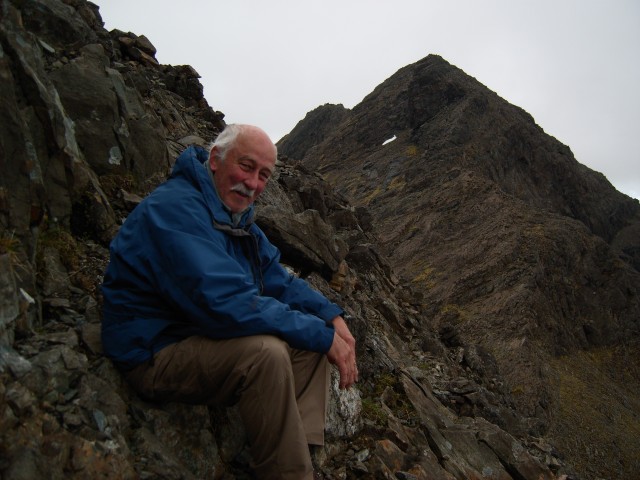 Well done on getting up that one

The look on your face on the sliding pic says it all really.

Yes, well done, a great report and an experience I can certainly relate too. You did it the hard way too

What a superb report - it echoes absolutely everything I think and feel on the difficult hills and I have exactly the same thoughts and opinions! Just showed the pic from the summit with the huge drop to the guys at work to give them some idea of the 'fun' I have when I'm on 'holiday'

Your face on that downscramble is probably nothing like as bad as the faces I pull though - do you make 'oooooh' type noises too? I do - it amuses no end of other walkers!

I wish I'd come with you on that day, especially seeing as you conveniently managed to get 2 extra guys helping you from An Dorus

Don't blame you copping out on Ghreadaidh - at least you know you can get up and down to An Dorus now - that should help if you do decide to do it.

I wish everything was more 'Cairngormic' (I know that would upset a lot of folks - my walking buddy Richard included) - I quite often think of giving it all up and just walking in those kind of areas. Not sure how far I'll get on Skye...

Many thanks for the comments Kinley, Paul and MC.
Very reassuring to have fear acknowledged, even parts of it shared.
MC, if I can do Vati, you can (I have read your postings)I can say that because I know the feelings well. The reality of the scrambling was nowhere near as intimidating as my anxiety level and the pic from the summit to Loch Coruisk shows a steep drop that over eggs the angle, as do so many such mountain pics. The scrambling is on more gentle inclines without the really precipitous exposure that my anxiety expected - it was the top inch of the body! Indeed I did begin to enjoy (as much as a feartie can) the scramblng on Vati. Good luck with the Cuillin and will keep an eye on your progress.

I know it probably is an easy enough scramble - I've just done what Richard said was a really easy peak with a good path (I've yet to write a report when my photos come back so won't name it yet) and, like you say, I knew it was easy at the time and that there wasn't really a problem... but the exposure just had me mostly panicking along it and looking (and sounding

) terrified! Richard didn't know whether to laugh at me or worry about my lack of usefulness for Munro-bagging! But there were seconds in between panic attacks where I knew I was being silly I think.

But anyway, 'Vaty' is one of the ones I have ear-marked to try, along with Banachdich, Bruach na Frithe and potentially Sgurr nan Eag... I'll be watching for any more of your posts with interest