Having fair enjoyed an early January outing to an obscure Cowal Graham, Creag Tharsuinn, despite a wet day with virtually zero visibility

, I thought it might be nice to have a look at another obscure Cowal Graham in better conditions. In the course of bagging Creag Tharsuinn from Glenbranter, I'd had the opportunity to recce a potential route up Beinn Bheag on the opposite side of Glenshellish. Despite (like many Cowal hills) having an awful lot of forestry around it on almost all sides, the map showed a potential way up via a handy firebreak going all the way up through the all-encompassing Sitka gloom, which according to the OS map starts just at the point where the lower forestry track on the west site of the Glenshellish Burn crosses the burn by a bridge and makes a hairpin turn to run back up the glen on the east side of the burn.
I thought it might also be nice to bag the former S2K Marilyn of Cruach Bhuidhe, also known less catchily as 'Point 568' and sporting a trig point, no less, despite the fact it has now been demoted to just a Submarilyn.
Anyway, this was my route as it actually panned out, more or less:

our_route.gpx Open full screen  NB: Walkhighlands is not responsible for the accuracy of gpx files in users posts
I got a relative long lie once again, and didn't arrive at the main Glenbranter car park until about 9:30 a.m. It was a lovely bright February morning, but there were only a couple of other cars about. I set off in good spirits up the main track south of the car park, passing the bridge to Glenshellish Farm and the west side of the glen, ignoring the right turn signed for 'Lauder Works & Wildlife Hide', and then a bit further on, turning off left on the rougher track signed for 'Glenshellish Loop' at the point where the main track heads right uphill. Before long, all three of the Grahams in this area were lined up along the horizon: Creag Tharsuinn on the right, Beinn Mhor looming large in the middle, and Beinn Bheag showing off its knobbly ridgeline on the left. A bit further up the glen, and Beinn Bheag's cockscomb ridgeline was looking even more tempting: Further up yet, and Beinn Mhor was looming massively at the end of the glen, as its name would suggest. It may just be one of the higher-end Grahams height-wise, but it has a big 'footprint' in terms of high ground! The Forestry Firebreak it was, then. Sure enough, I soon spotted it exactly where the map had suggested, just where the track crosses the Glenshellish Burn and takes a hairpin bend back north. It was quite a steep ascent, and crosssed some fairly rough ground particularly towards the start, but it did give a mostly Sitka-free route up. 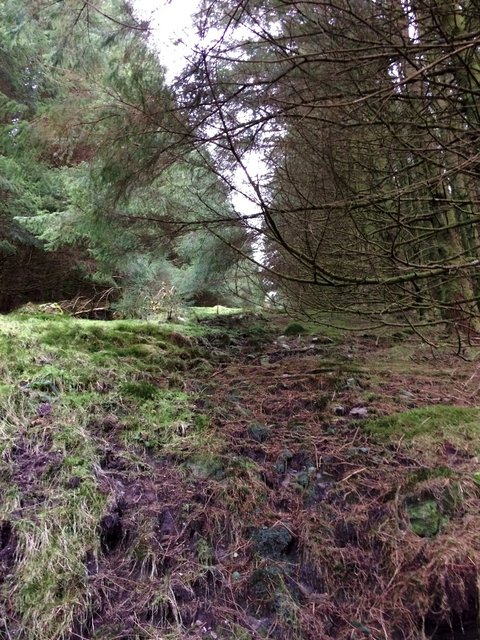 About halfway up, I paused to admire the view of Creag Tharsuinn on the other side of Glenshellish. Ah, so that's what it looks like! When I climbed it in early January, I couldn't see the nose in front of my face A bit more climbing, and to my considerable relief, the top of the trees finally hove into view... . This had a much thicker layer of the White Stuff, however, and that slowed me down considerably. Conditions were fairly soft, and snowshoes would definitely have been handy

! I cut up northeast, to the right of the craggy lump marked on the OS Explorer map as 'Meall Breac'. As I rounded the south end of the Meall, a lovely brooding view emerged of Beinn Ruadh, a Graham on the other side of Loch Eck, with a threatening sky behind it. As its name ('Rough Lump') would suggest, the east side of Meall Breac proved to be pleasantly craggy, with some interesting wee rock stacks. A bit further north, and a pointed summit which I took to be Beinn Bheag's summit environs came into view. However, this turned out just to be yet another false summit, and the actual summit was a wee bit further along again. Still shedloads of snow about! It wasn't too much further from here to the top. There are two high points just about ten metres apart that vie for the title of the True Summit: I think the first (southern) one is the real deal; it looked as though there was a small cairn under all the snow. They were both fantastic viewpoints, anyway, with a thrilling drop to the east all the way down to the long glacial trench of Loch Eck, The best of the views were probably still south-east to Beinn Ruadh, with sea lochs behind it on both sides: The Corbett Beinn Bheula was looming large to the north-east, backed by numerous Arrochar Alps: Beinn Mhor was still looming just as large to the south: ...And there was a grand view out west down the left side of Beinn Ruadh to the fractal coastline of East Cowal, with its various sea lochs: 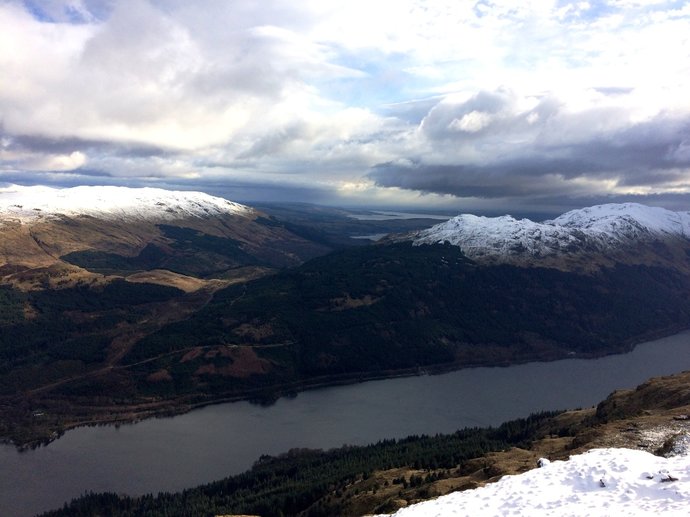 Enough with the views, already - I had another hill to climb, albeit a rather 'unofficial' one. This is the little peak bearing a trig point at NS125947, marked on the OS map with a spot height of 568 metres. In the first edition of his 'Relative Hills of Britain', Alan Dawson listed this as a Sub2K Marilyn, no less, named 'Cruach Bhuidhe'. However, re-surveying has apparently revealed that it is exactly one metre short of the required 150 metres of relative height, so it is now demoted to just a 'Submarilyn' in Appendix B of RHB. So obscure is it, in fact, that it seems to have become subject to something of a Name Controversy, with the new SMC 'Grahams & Donalds' book insisting that it isn't called Cruach Bhuidhe at all, but just 'Point 568', with the name 'Cruach Bhuidhe' being reserved for a smaller northern outcrop closer to where the words are printed on the OS map. Ho hum. It's a fine rocky wee peak, anyway, and I feel that it deserves a better name than 'Point 568'. Perhaps we can agree to refer to it as 'The Former Yugoslav Republic of Cruach Bhuidhe'

? Here's a picture of it on the way down from Beinn Bheag, anyway. It's a steep descent to the bealach, and I took my time, but at least there were some wee crags complete with picturesque icicles by way of distraction: The actual bealach itself was predictably boggy, and also heavily forested at the true col, so that it was necessary to accept a bit of extra height loss to cut down a bit to the east of this. In fact, with all that forestry at the col, I would think that this would be rather difficult terrain to survey properly, so the Former Yugoslav Republic might just turn out to be a S2K Marilyn someday after all

!
The re-ascent was initially rather tricky, with a short unavoidable finger of forestry that had to be crossed, followed by jooking round a crag to gain a steep grassy ramp that provided a way up to the summit environs. It took me longer than I'd expected, but eventually I was up at the trig point, enjoying a grand view back south to Beinn Bheag and Beinn Ruadh: Turning northwards, there was another fine view of the Alps, and also a rather incongruous-looking green shed just a few metres away from the summit, presumably belonging to the Forestry Commission. Out to the west, there was a clear view of Creag Tharsuinn ... and could that be the Paps of Jura on the far horizon I headed down towards the Shed, thinking that I could shelter on its northern side from the chilly southerly wind. To my considerable surprise, it turned out that the door had Fell Aff, and that the shed was open to the elements! It wasn't the most luxurious of accommodation, and there was a rather alarming notice on the back wall giving instructions for performing CPR

, but at least it provided a nifty bit of shelter while I enjoyed a rather belated lunch It may currently be a bit challenged door-wise, but it's certainly a Shed with a View Hopefully the Forestry Commission may get round to giving it a new door soon; I can't imagine that it will last very long otherwise.
Now it was just a matter of finding a way back down through the Sitka monoculture to Glenbranter. In the first instance I headed back down the steep grassy ramp I had come down, then started bushwhacking down through the trees, hoping to pick up a stream or something that might give a relatively tree-free descent route. It was hard work at first, but I managed to pick up a rough disused track heading northwards just a bit below the treeline which I followed north for a few hundred metres, then cut downhill to the west where it met the beginnings of one of the eastern tributaries of the Glenshellish Burn. As I'd hoped, there was a small unplanted strip on both sides of the burn which provided a rough-and-ready way down. I made slow work of it, but eventually I made it down and across an upper forestry track (which I avoided as it would have meant a fairly considerable detour), and further on downhill to a lower forestry track that should hopefully lead back to Glenshellish Farm. Thankfully this did exactly what the OS map suggested, although it is worth noting that nearer the farm, it crosses a recently clear-felled area with fresh logging, complete with 'No Unauthorised Access' signs and the like

. Thankfully all the Forestry guys had clocked off for the weekend, however, and I was able to plod on down the track without getting in anyone's road.
This was a grand wee winter's walk, with a pleasantly off-piste feel to it. The only human being I met all day was a chap out for a walk down in the clear-felled area: we passed the time of day, and had a brief discussion around poor Point 568's Name Controversy.
I'd definitely recommend Beinn Bheag - a grossly under-appreciated wee hill. The Former Yugoslav Republic of Cruach Bhuidhe ain't too bad, either

Re: Beinn Bheag (Cowal); some grand winter views, by Eck!

Great report there,will be getting this one done in the next few weeks ,last of my local grahams to be done ,was up Creag Tharsuinn on Fri 10th ,some pretty deep snow about nearer the summit and very cold with a couple of snowy showers but a good day allround. You had a good day for photos.