Firstly, without sounding too much like an Oscar acceptance speech, I would sincerely like to thank the 6 writers of the existing WH reports, without whom we would have no idea of the wonderful views from the top of Ben Hiant.
We were there last Saturday, with the cloud base at around 1000-1200ft, and the forecast saying it would be brighter later. Indeed it was -- at about 4pm, 3hrs after we had got back to the car that had been parked at the wind turbine access road.
It was dry overhead but very wet underfoot as we started and that was before we had left the tarmac. The path does indeed take one all the way to the top and appears to be the one marked on the WH map, and very useful it is too, I would not have liked the idea of orienteering along the route and the ridge in the pretty misty cloudy conditions.
About 5 min after starting we were overtaken by an enthusiastic bunch of youngsters who we saw again later as they descended, well before we had made it to the top.
There were views of a sort on the way up, sunshine breaking through the cloudbase and lighting up the waters of Loch Sunart and the Sound of Mull. 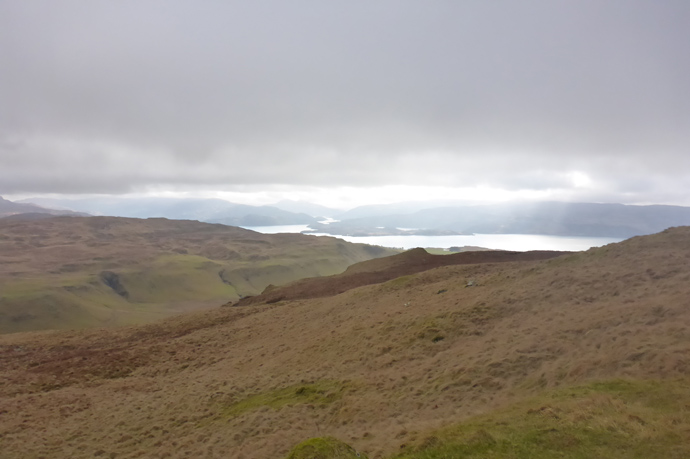 The day was like an old sepia print, everything was one of many shades of brown, dark grey & darker grey for the rocks and and also the ever present grey sky, cloud and mistiness. 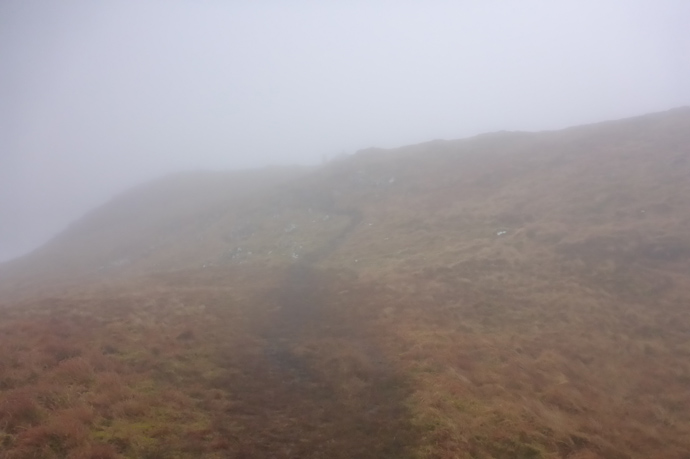 I reckon this added to the enchantment of the climb, the views down either side of the ridge through drifting cloud were dramatic. Not having been there before an optimistic approach was taken, every consecutive lump of hillside that came into view was greeted with the hope that maybe this one was the summit. And then, there was an obvious escalation of scale and a much larger more forbidding sight appeared. The first thought was - I really do hope that the WH website is right about there being an easier path to the left of this apparition! And indeed it was, and after what felt like three fairly easy stages I heard a voice say “Looks like you’re working up an appetite!”; on asking for an explanation was told I had misheard, the real message was “There’s a welcome sight!” and indeed it was, a cylindrical Vanessa type Trig pt and a cairn with some artistic balancing of stones on top. Artistic balancing act, by the stones that is.

Possibly done by the younger hill climbing squad.
The view from the Trig pt to the cairn was just as stunning as we had been led to believe.... Possibly a hill behind the cairn?

But absolutely no sign of the Tertiary Ring Dykes to the NW that we had walked to the centre of about 8 years ago.We sheltered on the lee side of the summit for coffee and lunch before retracing our steps to the car. Later in the day the sun broke through and the hills nearby were bathed in golden light, maybe next time it’ll be like that at the top, 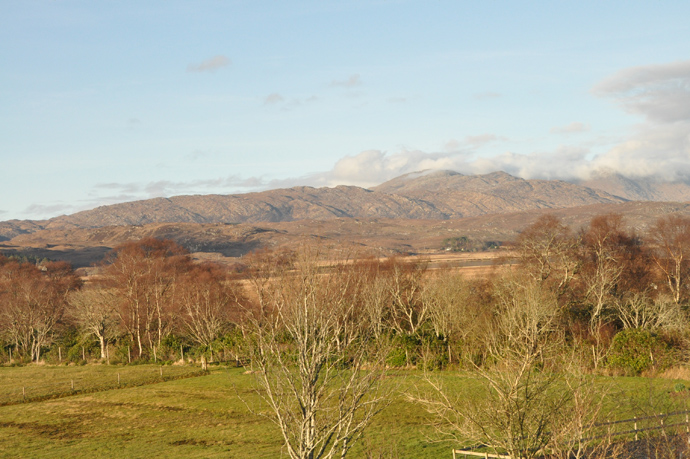