As my husband often says, we are known for making easy routes difficult and turning simple hills into epics

The way I see it, nothing wrong with choosing the longer approach if it's more entertaining. In case of Beinn na Lap, I always dreaded the Corrour route, as very dull and not really appreciating the best side of this shy mountain. So I started to look for alternatives and the idea of walking in from Fersit came to mind. Following suggestions and information from fellow WH members (thanks a lot again, everybody

) we plotted our route, beginning from the car park in Fersit and using the old Corrour Forest path around the eastern flanks of Chno Dearg. It's possible to add the latter to the walk to make more of circular, but we have already climbed Chno so there was no need to go over the top with distance/ascent. Even as a simple walk in-and-out, this route came down to almost 30km and over 1000m of ascent (GPS data), took over 10 hours, but we had a splendid day, weather out of dreams, we spent lots of time enjoying the views

It turns out, the path from Fersit to Loch Ossian is a right of way, so we assumed the path had to exist all the way - and it does. It's actually an ATV track, wet and boggy in places and a bit "untidy" in the forest, but nothing that can't be tackled by a determined walker

No stream crossings that could be a problem, the only pain in **know what** is the bog, but we walked it on a sunny, warm day with a lot of snow melting - it must be much drier on a nice summer day.
The final ascent to Beinn na Lap is pathless but very easy - all on grass/low heather and gentle angle.

Track_BEINN NA LAP 25-03-17.gpx Open full screen  NB: Walkhighlands is not responsible for the accuracy of gpx files in users posts
We arrived in Fersit at 8am, giving ourselves 11 hours of daylight, more than enough to complete this walk. There were other walkers getting ready, probably to climb Chno and SCS. The morning looked superb already, blue sky and little wind, wow, perfect walking weather!

We walked through Fersit and past the last house, through a gate, then onto the access track, wide and dry at the moment: We found the right of way - a wet track, easy enough to follow:

The track follows the edge of the forest for about 1 mile then it enters the woods. The gate is padlocked, but a stile is provided for walkers: Just past the gate, the track splits, an indicator points the right hand turn as "Right of way to Corrour station". Walking was pleasant in the forest, with no wind and birds singing around, that until we encountered our first stream to jump over Joking aside, yes, the track has a few of those puddles to negotiate, but it's far from drastic. Soon we stopped for a short break by the ruins of an old cottage: Next, after crossing another gate (this one wasn't locked) we encountered some more quagmire...
Snorkel ready? At 390772 the track meets a wide firebreak which could be mistaken for a path - the right way is straight ahead, uphill. We found ourselves up to our ankles deep in melting snow and finding our way around/over fallen trees: I was very relieved to leave the forest behind, though the track out in the open was somehow squelchy:

...but forget the wet ground if you have views like that around you!

I must admit, the walk over the high moorland was one of the highlights of the day. You may only be 500m above sea level, but views are unbelievable. Back north, behind us, the bulk of Creag Meagaidh and sidekicks dominated the pano:

Zoom to Binnein Shuas, only a Graham but a superb hill by its own means. We had one of our best days ever on this one (and its twin B. Shios behind):

One more snap. We kept stopping every 10 minutes as we walked over the moorland, eventually Kevin began to worry, if we didn't hurry up, we'd never get back to Fersit in daylight! But how could we run fast if we were surrounded by this... I was particularly fascinated by the step western flanks of Beinn Eibhinn, mirroring in Loch Ghuilbinn. The next Munro walk on my "to do" list is Beinn Eibhinn - Aonach Beag traverse from Moy - another one from "paths less traveled" book, but I'm desperate to avoid the train for this duo as well!

A small cairn marks the highest point of the moorland path, great views down to the glen: The right of way descends to the Loch Ossian road. I say road because it looks more like it... Just in front of us, Beinn na Lap loomed, looking very inviting now:

We reached the bottom of the Munro and took a longer break by a large boulder. The final climb didn't seem difficult, maybe a bit steep-ish in the initial 100m. We were already mesmerized by the views around and to think that we'd get more of that mountain pornography later on,it was hard to believe!

Some snow, some heather, a few lumps and bumps - fine by me!

After the first 100m, the ground became even easier and it was more like a Sunday stroll than Munro bagging! There was a faint path to follow (where snow didn't obscure it). At some point, Kevin stopped and said Shhhh! We have company!
Oh, deer!

I was pinching myself. Such a fantastic day we had, views getting better with every step, I was so glad we decided to do this walk on a good day, to fully appreciate the landscape. And with the last touch of winter on the summits, simply breathtaking.

More panos to the north and east. Loch na Lap:

Loch Ghuilbinn and the surrounding peaks:

As we gained height, more views to the south and west appeared. The Mamores and Aonach Eagach:

It would be hard NOT to get crazy when looking at this...

Ben Nevis, what a beauty:

Full view to the Mamores:

The true summit of Beinn na Lap was in sight now:

Bewildered, gobsmacked, so much in love with this landscape...

Back to Chno Dearg and Stob Coire Sgriodain:

The final short, steeper section took us to the summit of Beinn na Lap - our first new Munro in 2017... Wee Lucy had an additional reason to celebrate

Hard to believe she's such an experienced mountain lamb now

We had undisturbed views in all directions, fantastic weather, so no wonder we couldn't resist a longer break here?
Time to relax and adjust your boots! 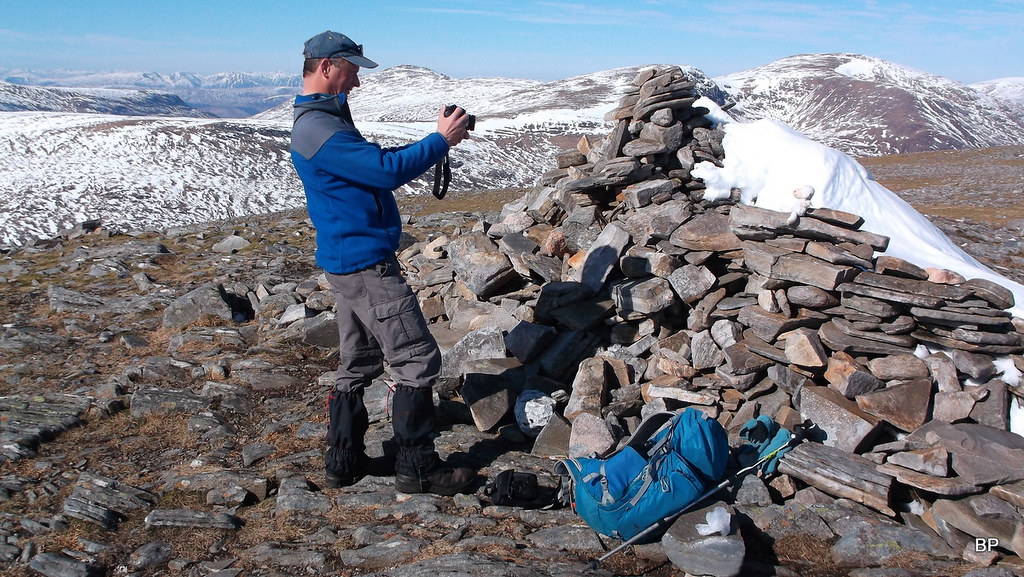 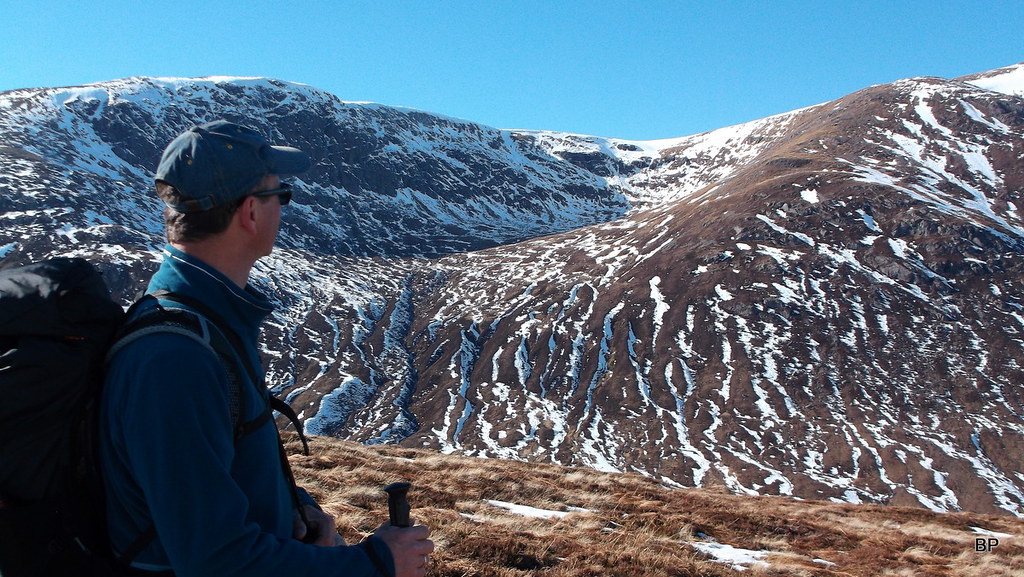 DSCF8226
The return walk to Fersit provided more fun, despite having to negotiate more wet ground (snow was melting like mad), we simply couldn't understand, why so many people opt for the Corrour route - this was the way to fully appreciate BnL!

2017-03-25 beinn na lap 321
Back in the forest, we discovered that most of the snow on the track in the woods has now melted, too, making the ground even squelchier

but we had so many fantastic memories, that some boggy underfoot wasn't going to spoil the day

Interesting route and great conditions for a walk.

I'm planning the Beinn Eibhinn - Aonach Beag traverse from Moy too, so I look forward to your report on that one.

Great day for it - do like the zoomed shots. Interesting way to approach - took this way initially off Beinn na Lap en route to Stob Coire Sgriodain but then came off the ridge part way down - as you say, the ground conditions are fairly straightforward if a little steep at times - cheers

Nice way to do this hill by the look of it. As always, the enthusiasm you both have for the hills shines through in your writing. Carry on

I often wonder where all that mountain madness comes from

It must be an addiction...

Beinn na Lap "less popular way" was something I always wanted to do. Hopefully Eibhinn and A. Beag come soon as well, all depends on weather. Hillwalking is such a superb way of spending time. By any means, I'm not going to stop!