The Cheviot: an incursion on the future E.U. border...?

The Cheviot: an incursion on the future E.U. border...?

Hewitts included on this walk: The Cheviot, Windy Gyle


My school friend Rowena was up for a week in the Scottish Borders with her family, and had texted me to see if I might be free for a walk. As luck would have it I had some Annual Leave days to use up, so I took the Wednesday 12th April off and drove down from Glasgow to the Deep South (Hownam, southeast of Jedburgh) to meet up. There had initially been talk of a relatively large group, including a fell-running friend of her daughter's which could have been embarrassing from my point of view

, but in the event the city lights of Jedburgh proved just too tempting for the rest of the group

, so it was just Rowena, her daughter Rachel and myself.
We had opted for a classic route of Windy Gyle and The Cheviot from Cocklawfoot Farm, as described in the SMC Grahams book, and we were at the start point just before eleven a.m. An interesting point in passing: the SMC book gives distance and ascent for this route of 19km and 620 metres respectively, but drawing it out using the website's route-drawing tool gives it well over 20km and 800 metres! I suspect the website's tool is more accurate (it felt a fair distance) so that's what I've entered for our outing.

our_route.gpx Open full screen  NB: Walkhighlands is not responsible for the accuracy of gpx files in users posts
It was a scenic drive down, across a couple of wee fords which were rather good fun, and with a lot of newly-borne lambs in the fields. Here are Rowena and Rachel at the start of the route: 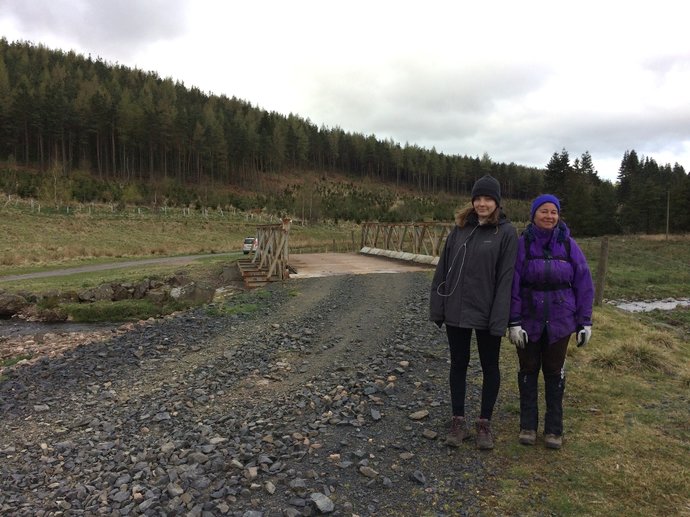 We had parked just across the final ford before Cocklawfoot Farm, where there is plenty of grass verge parking at the end of the public road. We started by re-crossing the Kelsocleuch Burn by a self-professed 'weak bridge' (which I hadn't much fancied driving across

!) to gain the track branching off right uphill towards Kelsocleuch Farm. 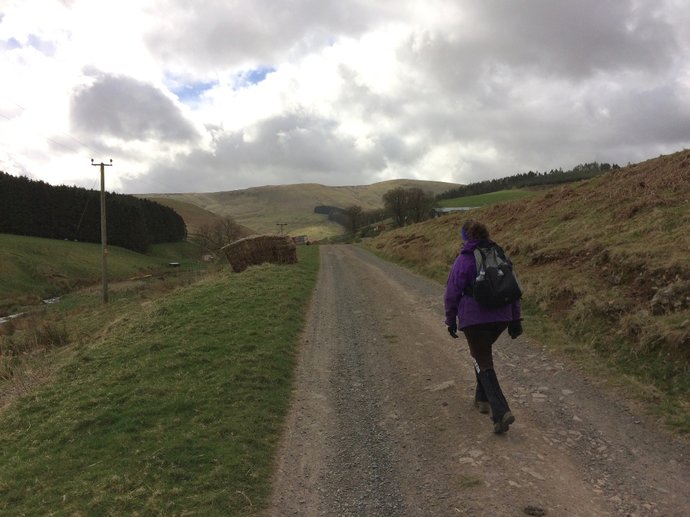 It wasn't long up to Kelsocleuch Farm, where we found this helpful warning sign about an electric fence, in front of some rather cute chickens. 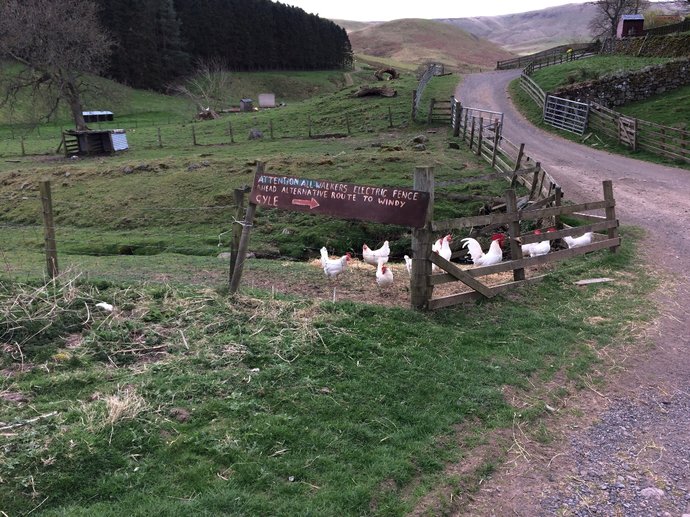 The next section confused us slightly: we took a gate into a field at the first break in the electric fence, but then started off slightly downhill to try to avoid a band of forestry, which wasn't actually the right thing to do. Fortunately the farmer was about leaving feed for her sheep, and she was very helpful with route directions

- thanks for that!
Soon we had exited the field via a gate that looked as though it was heading for the middle of the forestry, as per her directions, and as promised we found an easy grassy track heading up through the trees. Here is Rachel leading the way: 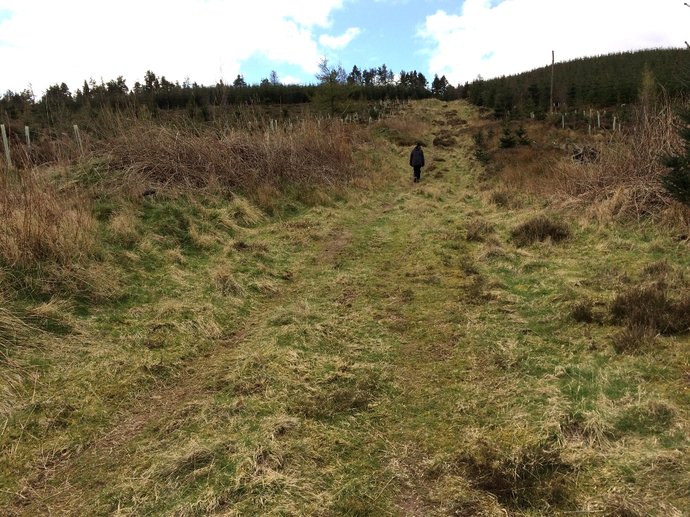 It was a fairly quick stoat up through the trees, and soon we were emerging from the forestry with the weather improving and some views opening up behind us. 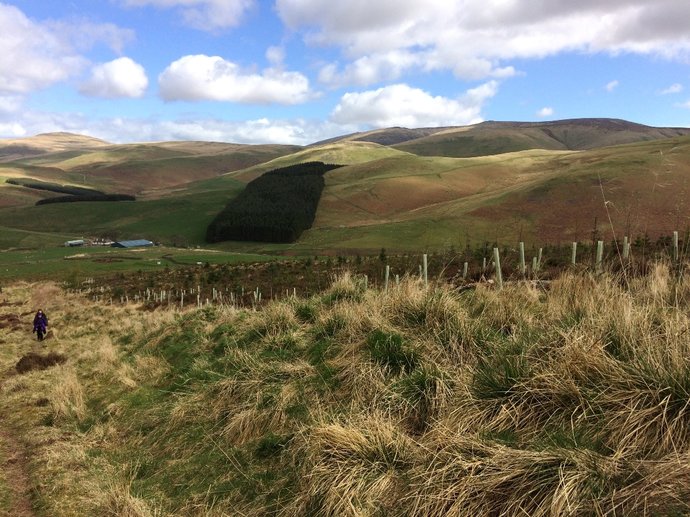 Windy Rig is a pleasantly undulating grassy ridge, scenic in a green-and-rolling kind of way, and it made for an enjoyable ascent. 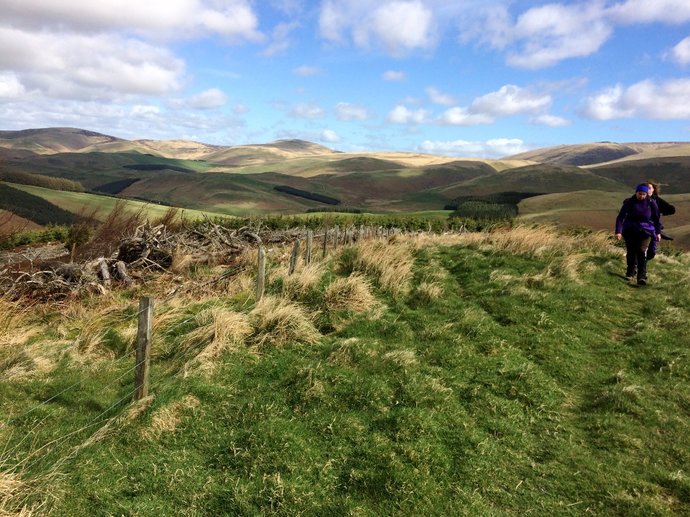 The direction of the ridge was initially heading slightly SW, meaning that the high peaty dome of the Cheviot - hopefully our final objective - was actually looming up behind us at this point, looking slightly intimidating. 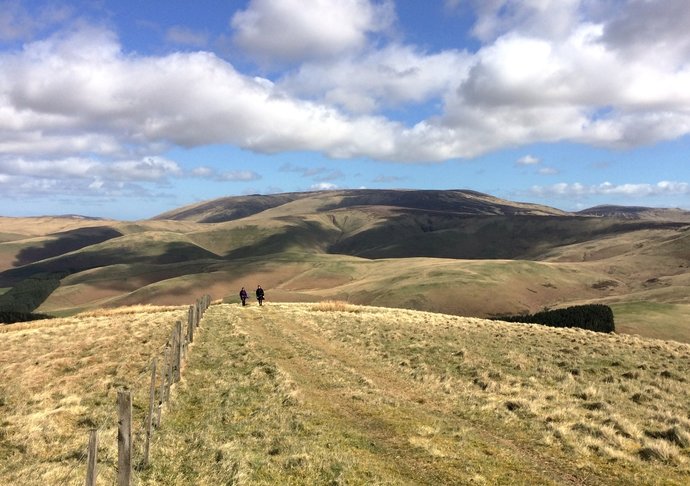 The higher part of Windy Rig proved to be a lovely curving ridge, with Windy Gyle and its huge summit cairn (known as Russell's Cairn) clearly visible now. 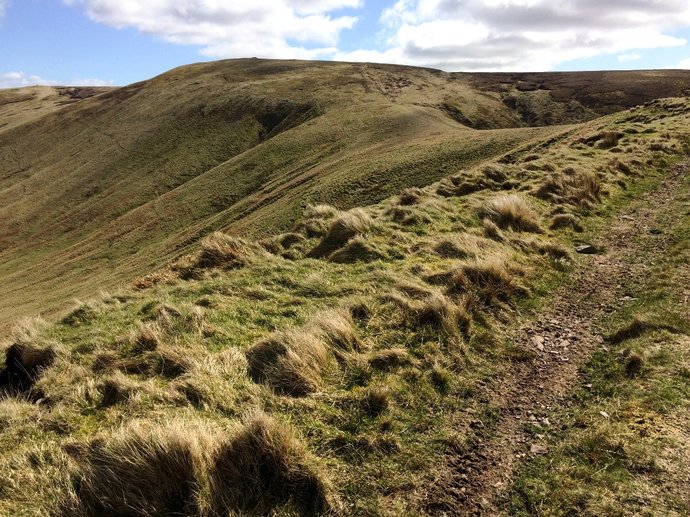 Before long we were at the summit, which is slightly 'cluttered', with the massive cairn of Russell's Cairn (one of these big ones said to be Bronze Age, although as usual I'm perplexed as to how anyone can possibly know that

), plus a Pennine Way signpost and a stone windshelter. Although Windy Gyle isn't a Marilyn (and hence also not a Graham), it does qualify both as a Hewitt and (because it is over 2000 feet and stands half in Scotland) also as a Donald. 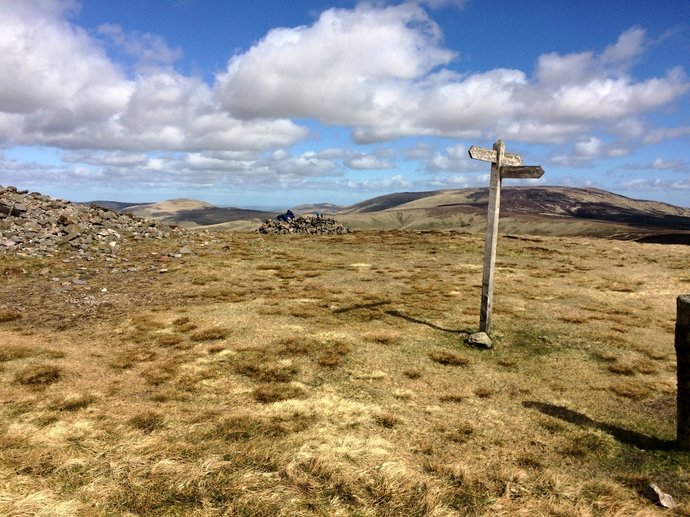 Me at the trig point: if I look as though I'm getting fat again from this angle, it's because I am 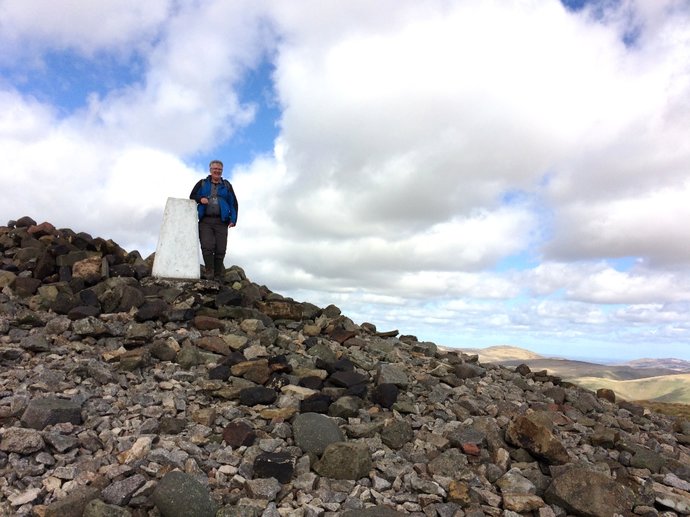 The ongoing route to the Cheviot follows part of the Pennine Way, along the line of the border between Scotland and England. Wherever one stands on the questions of Brexit and Scotland's independence, there is a genuine possibility that this could in the future also be the border of the European Union - a truly strange thought

. I certainly hope that it doesn't become a 'hard border' - personally, I'm upset enough over Hard Brexit, in all honesty

.
Anyway, as things currently stand, it's just an easy ramble up a broad and fairly featureless ridge on an excellent path. There are a whole series of cairns between Windy Gyle and the Cheviot, the largest one being just a short distance to the east. 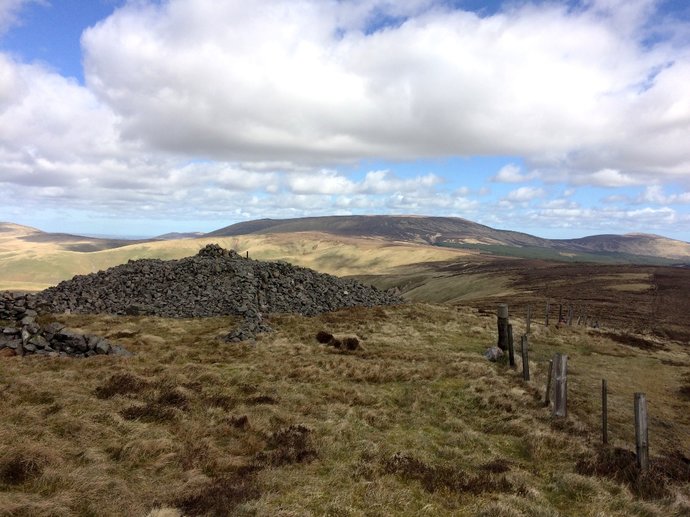 Just beyond this, we joined the long section of the Pennine Way that has been paved (presumably by fairly heroic volunteers) to become a high-level stone walkway: slightly surreal, but it certainly makes for quick going 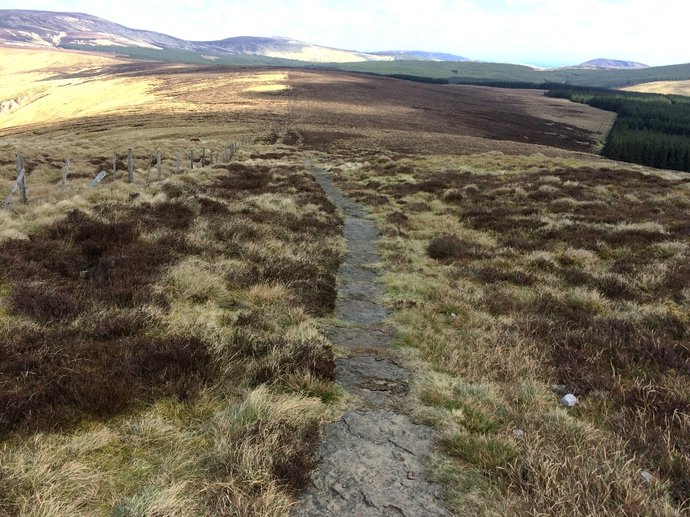 Before long, we reached the crossroads where the Pennine Way is crossed by the ancient cross-border route called Clennel Street. We stopped for lunch on a handy log just east of the signpost. 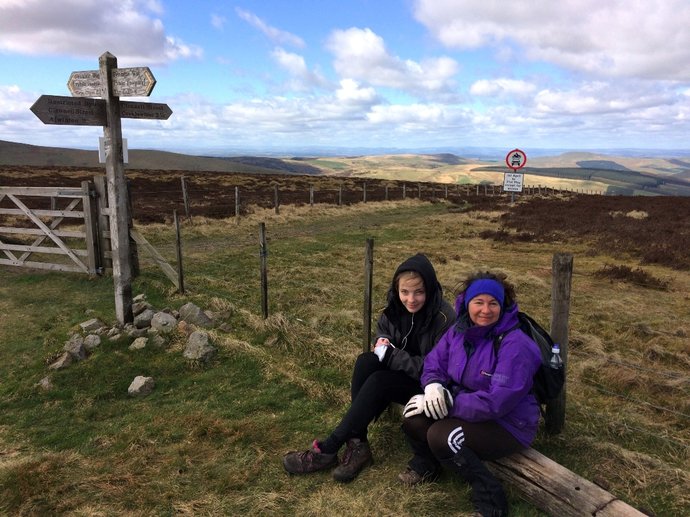 The next section was just a long and fairly featureless stoat along the paved walkway, but we made fairly quick work of it. I was initially confused whether the Cheviot summit was the excessively flat summit dead ahead or the pointer-looking one slightly to its right. A check of the map suggested that the pointier one was Hedgehope Hill, however, so the Cheviot was that big flat dome dead ahead, right enough 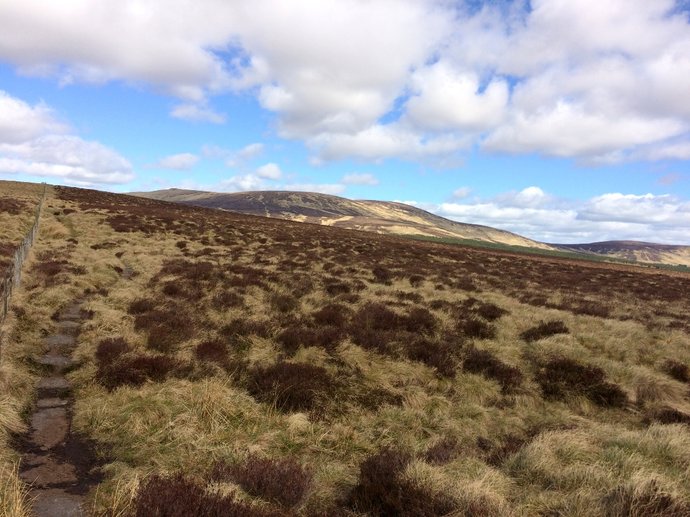 The flatness of the border ridge tended to rob any distant views of depth, although there were intermittently some half-decent views of the Scottish Borders receding into the blue distance. 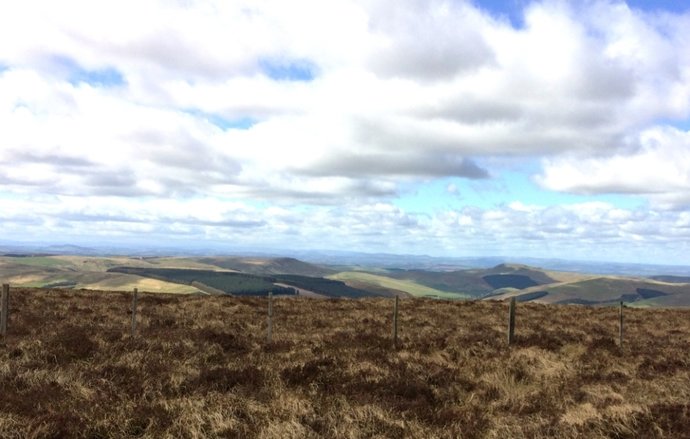 A view back to Windy Gyle: 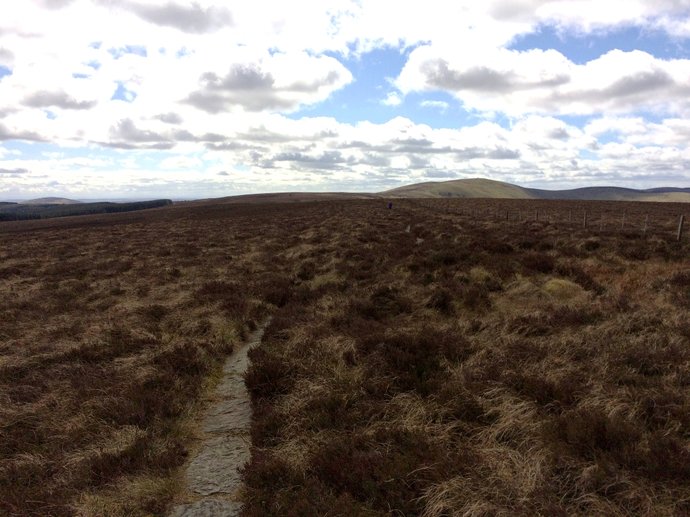 After this long flat section, the path started to rise more steeply again towards Cairn Hill West Top, the high point of the border, which although only a very minor bump is designated as a Donald Top, no less. Here are Rowena and Rachel nearly at the top: 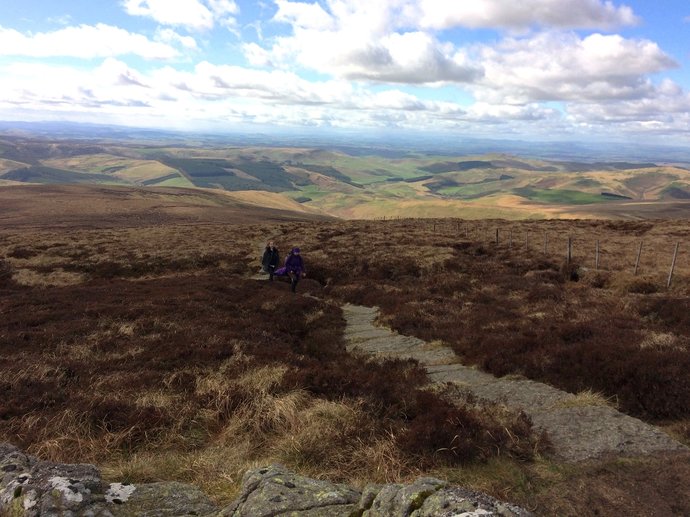 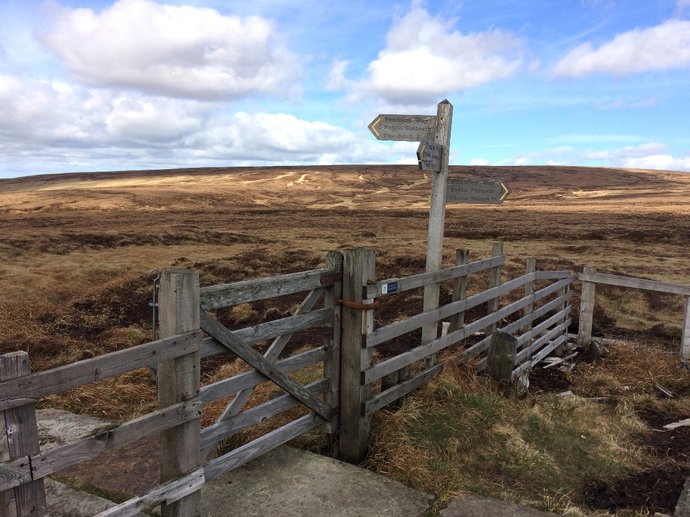 Rachel was getting a bit tired by now, however, and the rounded boggy dome of The Cheviot - decidedly lacking in that most desirable characteristic of mountains, pointiness

- really wasn't enticing her much. After some team discussion, Rowena and Rachel decided to head back to the car without partaking of the pleasures of The Cheviot summit, and I carried on myself to collect the Hewitt 'tick'. I was grateful for the fact that the paved Pennine Way walkway extends all the way to The Cheviot summit, because there were some truly vicious-looking bits of bog just off-piste. Just short of the summit, I met a very friendly couple we'd chatted to earlier on, at Windy Gyle summit (she had previously lived in Milngavie and it turned out that we had several mutual acquaintances; it's a small world

...). They told me that there were indeed local tales of horses having disappeared whole into the bog in the vicinity of the Cheviot summit on several occasions during the eighteenth and nineteenth centuries

.
All the same, the paved walkway makes it an easy enough walk nowadays, and soon enough I was at the massive summit trig point, which looks decidedly incongruous in the middle of this desolate bog. Someone should tell this poor hill that when it comes to summit markings, Less is More, and that trying to distract from a lack of pointiness by adorning yourself with a huge stone thingamajig just doesn't work Plenty of bog around here with definite horse-swallowing potential: I headed back down the way I had come to Cairn Hill West Top, and then took the westward branch of the Pennine Way to Auchope Cairn. As its name suggests, this minor top is adorned with a couple of impressive cairns. Just to the north is an impressively wild chasm known for some reason as Hen Hole. I made a short detour downhill to the north to a hillock that gave a better view of it: An impressive bit of scenery, especially considering that it's in England The paved walkway comes to an end at Auchope Cairn, and my ongoing route headed initially downhill to the west on a smaller grassy path down Auchope Rig, soon bending southwards to leave the border (and the Pennine Way). After passing a rather cute Mountain Refuge Hut, I spied a farm track downhill in the distance that looked as though it was heading back towards Cocklawfoot Farm, and sure enough it was, making for a fairly easy descent. Soon enough I was back at the car, where Rowena and Rachel were chilling and getting their breath back.
My first Two Hewitts, these hills, and although the Cheviot may not be the pointiest of hills, this Border Raid made for a very pleasant excursion, all in all

Re: The Cheviot: an incursion on the future E.U. border...?

Nice report, I share your concerns about what the future may hold for this part of the world. Too horrible to contemplate some chain link monstrosity winding it's way along the hills.