A year ago today Moira and I climbed Creag Dubh, had a most enjoyable walk and I don't know why I didn't get round to writing it up. So before I get on with more recent trips I'll rectify that as it's a great hill, well deserving a mention.

We parked in a space on the north side of the A86 and decided we would forego the hassle of a steep ascent over a jumble of rocks and through deep vegetation (though in April the vegetation shouldn't have been too bad), since there was a more civilised alternative. We walked south along the road as far as the entrance to Creagdubh Lodge, where opposite there's a gate. We followed the path through woodland and got immediate views of the cliffs of Creag Dubh through the trees and could hear the voices of climbers even when we couldn't see them. Creag Dubh is meant to be one of Scotland's finest 'roadside crags' and we saw a number of climbers heading off with ropes on their backs. The path that follows the course of the Allt na Glaic was easy to follow, until we emerged from the trees and headed NW towards a lone birch tree. Care should be taken on part of the path which is narrow and hugs the edge above a steep drop. Then it's out into the open, climbing at a comfortable gradient and with views on every side. We found it a delightful ridge to walk and were happy to retrace our steps on the return to see the views again in all directions. 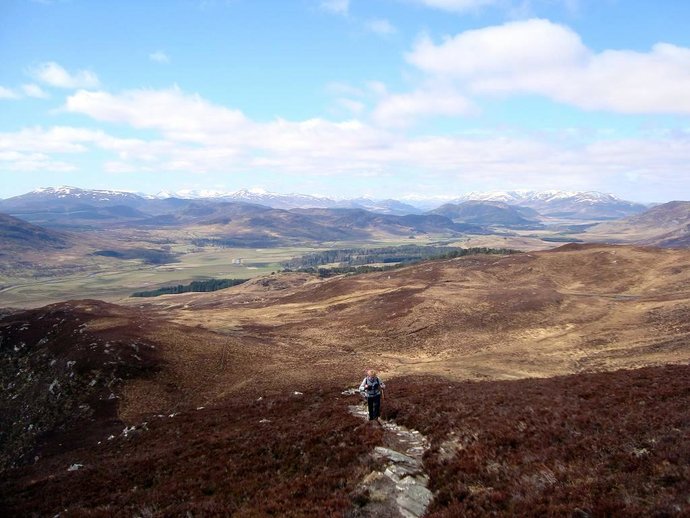 I'd swithered about taking the dogs but after what happened to another WH dog on this hill I decided not to - and this stile would have been tricky for them so it was probably the right call to make for old dogs. So there we have it - a hill of character and worth climbing. Creag Dubh (the black crag) is prominent from Newtonmore and its name is the battle cry of the Clan MacPherson. On its sheer slopes facing Lochan Uvie is Cluny’s cave where the chief of the MacPhersons hid safely for 9 years after the battle of Culloden despite a reward of £11,000 offered for his capture, which in those days was a vast sum of money. Such was the loyalty of the often impoverished clansmen for their chief.

Oh that does look gemlike

A hill without drama? Eh? What'd that all about

If your ears were burning on Wednesday it's because I was telling my pal about your elegant descent off Biod Fhithich as we came down it. Funny the things you remember from folks' reports!

Jaxter wrote:A hill without drama? Eh? What'd that all about

Drama probably not right word to use here. More like "any unpleasantness as described in WH ascent route"- which doing it the way we did you completely avoid. But on the other hand folk do like a wee challenge and there's nowt wrong with that.