Well its been a while. That is, a while since I posted on WH. Mind you that is because I put myself into self imposed exile for various reasons that seemed logical at the time. In those past few years I have walked many Munro's and rejoined the mountain running community as an over 50's athlete competing in races such as, The Stuc 5000, the Ochil's 2000's and the Meal na Tarmachan hill race where upon I achieved my best position, 16th in the race overall and second auld yin. Add to that various other hill races, various 10km and park runs.

Unfortunately early in 2016 i sustained a calf injury that stopped me racing and it just hasn't went away. In addition a head on car crash in late January this year gave me painful ankles and whiplash which has kept me from any real sport since, until last weekend of course. I had been doing some gym work to keep up my fitness and I was looking forward to getting out

So not to bore you all any further The weekend of the 21st April was the spring WH meet at Kinlochleven. As is usual with me, a last minute decision to attend on the Saturday night sprung to mind when I noticed there was a bunk still available. So I paid jackie over the internet and set my alarm for 0430 on Sat 22nd April. A quick drive up to kinlochleven, quick meet up with some of the attendees and I was on my way into the hillside just before 8am.

The walk starts at the Grey Mares Tail waterfall car park and climbs gently through the small forest onto open moorland but the path is clearly marked. Basically the route follows North East for approximately 6.8km to the small Lochan below Sgurr Eilde Mor. From here its simply a small scrambly 250m ascent up the South East shoulder of the Munro to reach the small rocky summit. I had caught up with Geo and his friend and they said they were out for a leisurely walk so I quickly left them and got on with the task.

Binnean Beag can clearly be seen from here on a good day and doesn't look too far away. leaving the summit continuing in a North West direction the path drops steeply over some scree to the base of the hill. continue on the path for approximately 1km where the path then drops into the Allt Coire a Bhinnein and then gently contours the hillside for a further 1.2km to the lochan below Binnein Beag. Its now a steep but short ascent to the top of the second Munro and back down to the small Lochan.

I had already decided that I was going to ascend the scrambly steep Eastern ridge of Binnein Mor (there is a more gentle ascent up the Northern ridge apparently) and duly left the path to ascend the open hillside.

I have found some interesting objects on the hillside in my time but never a pair of shiny steel 8kg dumbells. They were lying just off the path. There was a group of approximately 200 campers up here over the last two nights and I can assume they belonged to one of the campers. I certainly was not going to just nip them into my bag ad carry them out. Do I look daft...hahaha.

So onward's and upwards up the hillside. over the scrambly rocks and up the final steepish ascent to the summit of Binnean Mor. There had been a small snow shower earlier on but now the views were fairly good and extensive. I will let the photos tell the story. By now, I had been moving quite quickly, my legs were feeling the strain. My ankles were a little bit painful but not too bad and most of the hard work was done by now.

Its an easy enough wide ridge walk to the fourth Munro, Na Gruagaichean and after passing and chatting to a couple of walkers along the way I was soon at the 4th summit. I was only wearing a thin long sleeved running vest so I didn't hang around in the cold wind and set of down the Southern flank of the hill heading back to Kinlockleven. I must admit i had not researched the walk out and was not sure if there was a path down the hillside. I decided after 1km that I would descend the pathless North West flank because the contour lines were less tight and then contour round to the track at the base of the hillside, but in the end I probably didnt gain anything. It got a little steeper as I descended and I just had to grit my teeth and continue the motion. I rejoind the main track and decided to cut across and head up another steep incline to rejoin the path back to Kinlochleven.

My thighs were burning with the constant descent but I was soon back in Kinlochleven, showered and changed and in the pub with Malky. That night there was a superb quiz and some great banter with lots of people. A pleasure to have met all those I have and haven't met before 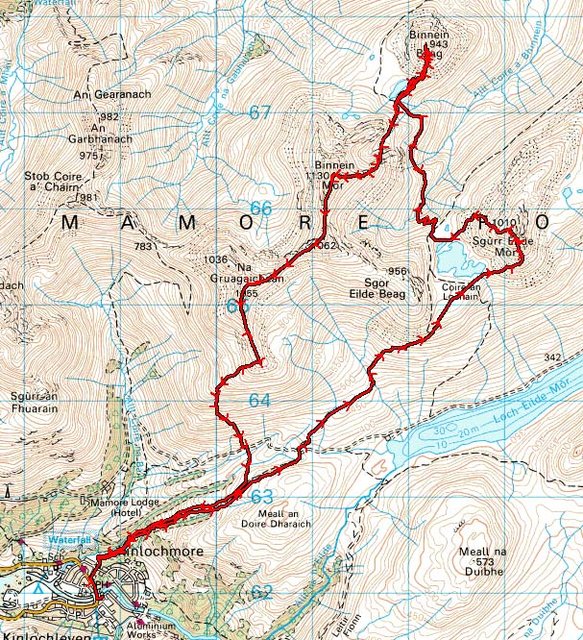 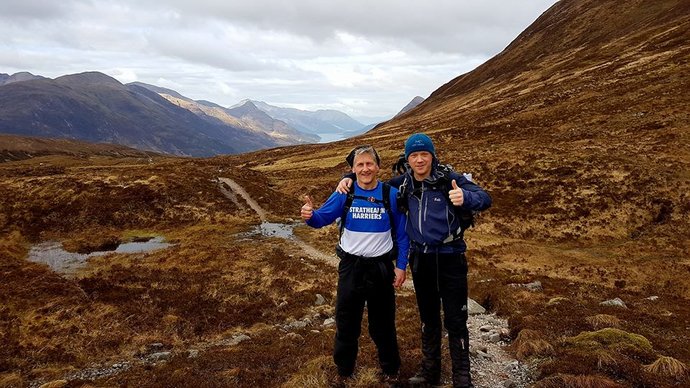 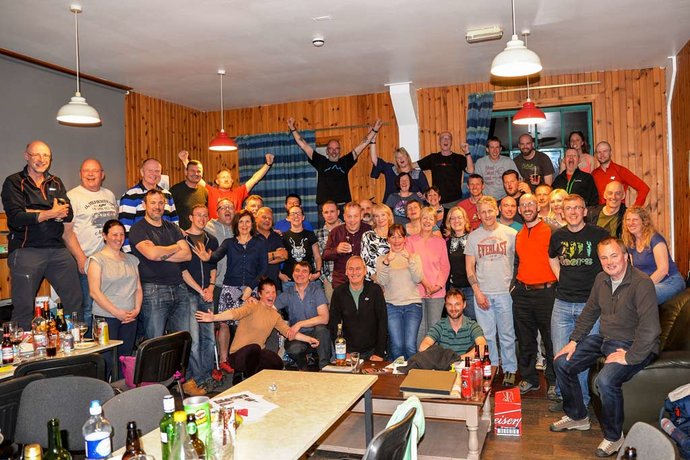 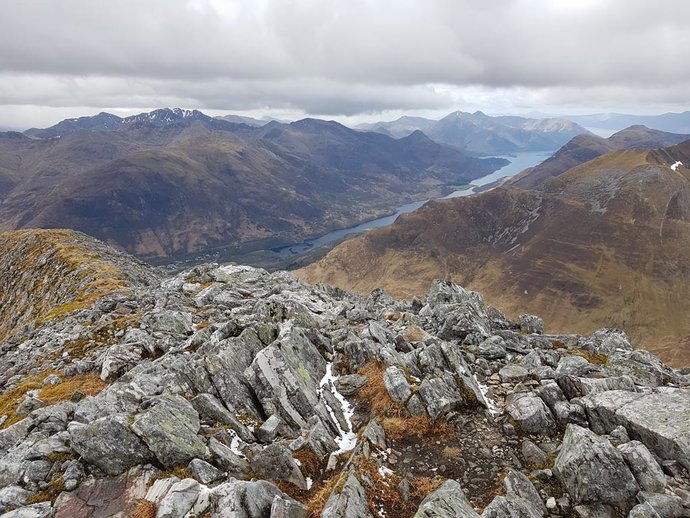 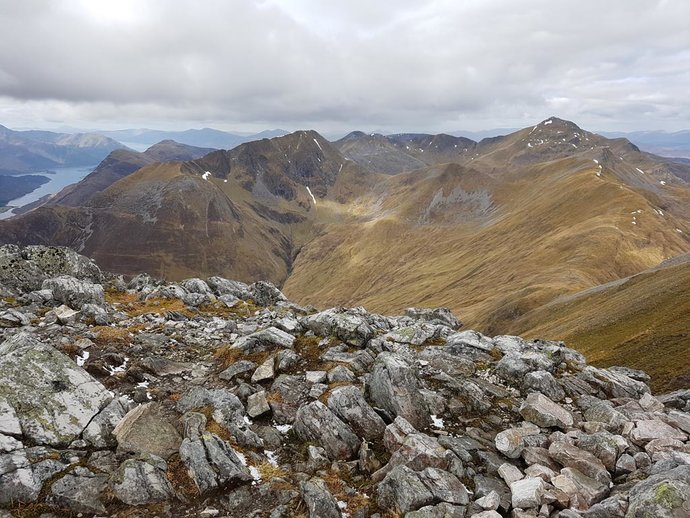 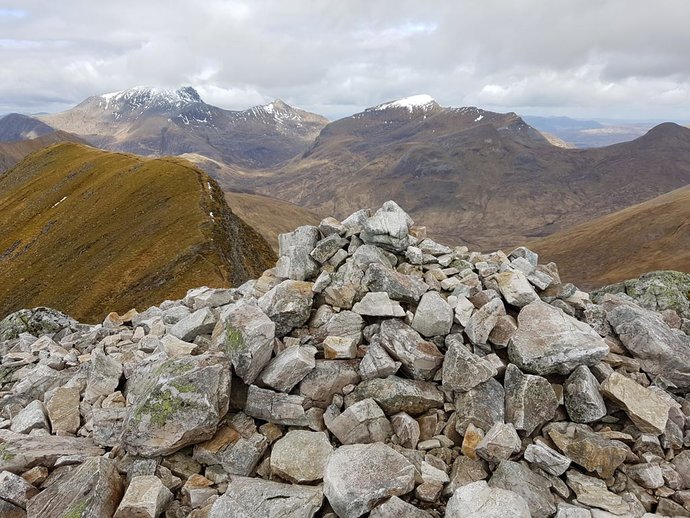 Nice to see you back Monty

Welcome back....although I was hoping for 'Mr. Monty' or perhaps 'King Monty'

Good day out, no hanging about, and plenty of stats - looks like things are back how they used to be

. Good to catch up with you afterwards

Good to hear from you again monty

and a nice way to get reintroduced - cheers

It was great seeing you Monty, we had a cracking day for it

Welcome back Monty, and good to see you at the meet

We dinnae see you for dust on Saturday, although there is a wee white speck on the top of Binnein Beag that we were pretty sure was you 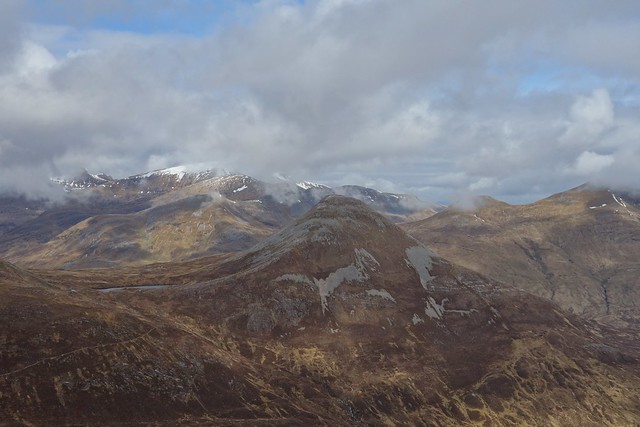 Nice one - you certainly didn't hang about

Interesting route up Binnein Mor, I had the eastern ascent loaded onto my phone, but we opted for the steep grassy slope onto the ridge that joins the summit from the north. My only concern was the conditions on the ridge as we obviously couldn't above

Was a good ascent route

Thanks for all the comments

Cheers for the beers Malky. I was way ahead of the white speck Jaxter. I go at my pace til I fall over FF. Nice wee route up that scrambly ridge

It was nice to finally meet you at the WH meet Monty, good effort and fabulous photographs

Someone must have left the dumbbells for you to find ...surely an aim to slow you down

if you would have picked them up

Nice to see you again bud.

Nice to finaly meet Rod. I think the dumbellsbelong to you Mountainlove

Excellent stuff young 'un, even with your name change!
Great report and photos - good enough for a webtog voucher I hear.
Look forward to catching up at Glencoe this weekend.