our_route.gpx Open full screen  NB: Walkhighlands is not responsible for the accuracy of gpx files in users posts
After spending the winter months walking in the Southern Uplands i was keen to get back up into the Tyndrum area having climbed Beinn Odhar there last summer and having a good look at Ben Challum from the summit.
The WH report indicated a high bog factor but the recent long dry spell gave me some hope that it wouldn't be too bad so off i went intending to follow the WH route and not get creative as it looked quite a slog.
Parking at the layby on the A82 opposite the entrance to Kirkton Farm i set off over the River Fillan and up past the farm and the ruin of St. Fillan's Priory then taking the footbridge over the railway and onto the hillside. 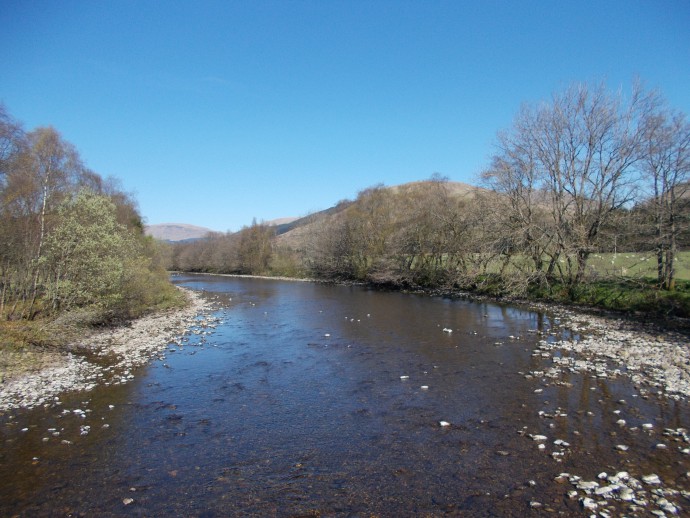 Footbridge over the West Highland Line

The steep climb up from Kirkton Farm was relentless and still fairly wet underfoot but straightforward enough despite the awkward stiles over a couple of fences, one of which had insulation on it suggesting it could be electrified but that was easily avoided. The higher i climbed the terrain improved as wet grass gave way to dry dirt and stone. Eventually the slopes of the south top came into view, not too welcome a sight as i'd read this mountain has two tops ! From the summit of the south top the views were extensive with Ben More and Stob Binnein a particular highlight. Following the WH route i wandered west and soon picked up the path heading north along a rocky ridge followed by a descent to a col between the two tops and the final approach to the true summit of the hill. The ridge between the two tops Approaching the summit of the north top Ben Challum summit cairn with the Tyndrum hills in the distance Looking back to the south top

Ben Challum was indeed a slog but the views on the day i climbed it made the effort worthwhile, that said i don't see me rushing out to climb it again especially after a rainy spell !