I had been looking at options for linking up hills – initially these hills were planned as two separate days but, with the sustained good weather, linking them up with an overnighter looked to be a good option. I had looked at various other reports and geograph which confirmed that Chabair and Mòr could be linked in different ways – just a case of picking the most appropriate route down then up for the conditions at the time. That just left the descent from Breachd-laoidh – couldn’t find any reports on it or photos on geograph but the map suggested there was a ridge of sorts to follow and some rocky outcrops to avoid – if I did encounter problems, I could always veer eastwards and take a longer route down.

Nice drive up and along the singletrack road. Its ups and downs remind me of when I first drove the route between Nedd and Kylesku and the points when it’s impossible to see over the end of the bonnet as the road dips down. Arrived in the car park with only a few spaces remaining. Got changed and set off just before 9am initially along the road toward Strathan then turned NW up the Glen Dessarry road.

Not long before I turned off to take the track which leads uphill towards Kinbreack. Came up over a rise and met two deer which initially stared at me then just kept eating – I felt as though I could have walked right up to them but didn’t, just in case.

Reaching a high point on the track, I branched off heading NE towards Mhurlagain. A little further on, I dropped the rucksack beside a rock and continued with a mini collapsible rucksack with just essentials. Passed another walker with his dog although he was further over to the east. Nice if a little hazy higher up and at the summit.

Started to head back down and met the walker and his dog – had a wee chat before continuing on back to the rucksack.

After collecting the rucksack, I headed back down to the main track.

I had originally planned to go further down before going westwards to start up Fraoch Bheinn from the SW. However, although steep, I could see a more direct route up by heading WNW. Crossed over and started steeply uphill.

At this point I remembered how much harder I find going up steep slopes with a camping rucksack compared to a normal daysack. Plodded on taking frequent breaks.

Stopped for a bit for some food and took some more photos then headed down the SW ridge. Met the walker from the previous hill with his dog again – he had come up the ridge and was on his second Corbett round.

Continued until I was past the craggy sections marked on the map then cut across NW towards Druim a’ Chuirn and up its SE ridge.

From the top of Druim a’ Chuirn, there’s still some way to go with a bit of descent/renascent

Eigg and Rùm in the hazy distance

Rocky pools at the top

Selfie at the summit 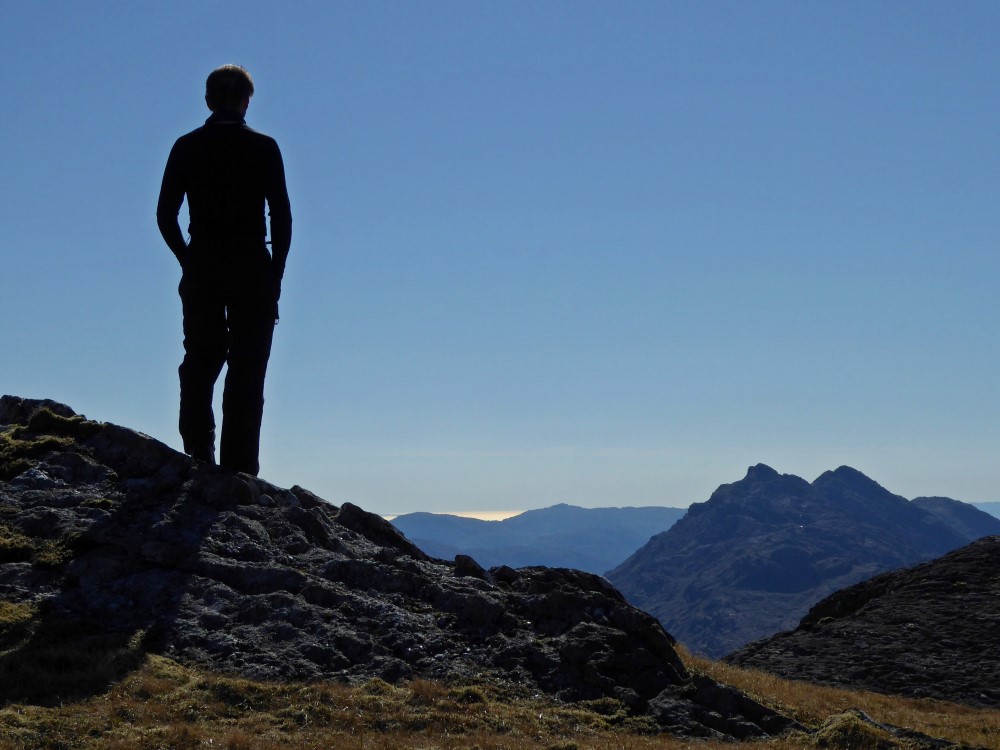 My plan was to camp here for the night if I arrived 7pm or later. If I arrived 6pm or earlier I planned to go on aiming for somewhere along Meall na Sròine part of the way up Bidein a'Chabair. Arrival between 6pm and 7pm was variable. It was currently 5pm and the wind was extremely strong – both factors heavily influenced the decision to go on.

Started the descent with a helpful old fence line as a guide. The balls of my feet were playing up again and weren’t helped by the steeper sections of the descent. All in all though it wasn’t too bad a descent although it did take longer than expected.

Back down in the glen, I continued to the right of the Allt until reaching the path then crossed the Allt using the bridge. Followed the rather boggy path NW up the glen until a little after the trees finished. A little difficult seeing a decent route up due to the shadow with the sun in the west but after walking over to the start it became a bit clearer.

Collected 2l of water and topped up my water bottle from the river as I wasn’t sure whether I’d make it far enough along the ridge to get to the lochans for water. This slowed me down even more making the steep ascent just that bit harder. Solution was just to slow down and take regular breaks – and there were many of these on the way up.

Part of the ascent route

Higher up, the slopes levelled off and I got a view towards Bidein a'Chabair

I was getting rather knackered by this point so had a hunt for a sheltered spot to camp. Was glad I’d brought the water rather than having to go further to the lochans (although I had actually made it further along the ridge than I’d thought I could and was quite close a lochan). Found a spot which seemed a little sheltered and erected the tent – then the wind got up again and realised it wasn’t as sheltered as I’d hoped. There was no way I was going to move the tent and anyway I’d brought ear plugs for the wind noise just in case.

Made dinner and wandered about a bit taking photos – not the best place for sunset shots given the height of the surrounding hills though.

Very windy throughout the night but the tent held up well. Got up just before sunrise and had a wander about. Again, not the best place for a sunrise shot due to the surrounding hills.

Glow from the early sun starting to hit the hilltops

Had breakfast, got packed up and headed SW along the ridge towards Bidein a'Chabair

One of the lochans

Nearing the summit, I dropped the rucksack and walked the rest of the way with the mini collapsible rucksack. Looking towards the final approach to the summit, it was hard to see how I’d get up there from a distance.

However, closer up there was a partial track and the approach route was more obvious. Was rather happy that I’d left the big rucksack below as there was a little scrambling and a wee bit of exposure.

Summit – towards Sgurr na h-Aide and out to the islands

Eventually I started to head back down towards the rucksack. The terrain now definitely looked more like Knoydart with its ups and downs and rocky outcrops.

After picking up the rucksack, I walked over towards the corrie edge to have a look for a suitable way down. Found what looked like a grassy rake and headed steeply downwards – choppy grass at times and the balls of my feet were starting to play up again.

Had a look on the way down for a suitable was up Carn Mòr. The map showed a stream flowing down (next picture – middle down to lower left in a rake or gully – on OS1:25,000 as the Allt Ruighe nan Dearcag) which looked feasible.

Crossed over the stream at the bottom then started steeply up the hillside on the western side of the gully. Found it very steep at times requiring an occasional bit of toing and froing.

Once at the top, the ground levelled off and I headed SW below Druim a’ Choire Odhair then south above the corrie towards the summit.

Stopped for a long break at the summit and to have lunch. Nice spot to stop. Took my boots and socks off to give my feet an airing (but decided against showing a photo of them....)

Didn’t want to leave but eventually had to set off. Heading eastwards form the summit, Loch Arkaig in the distance.

Once past the 616m, I headed down towards the trees to join the track just above A’Chùil bothy and then walk back to the car through the southern Glen Dessary track. Met a few walkers heading westwards.

Back at the car, the car park was full and there were cars parked back up the side road and at other points just off the roadside – it had got a lot busier. Met a couple who were about to cycle to Glenpean bothy to walk An Stac the following day – his bike was a normal pedal bike but she had the right idea as hers was electric. Got ready and drove back to Glasgow stopping at the fish and chip shop in Ballachulish on the way.


Glen Dessarry - size reduced for WH.gpx Open full screen  NB: Walkhighlands is not responsible for the accuracy of gpx files in users posts

As you say: a cracking quintet; and what perfect weather for them. Beautiful pics

That's a satisfying looking circuit. Nice set of 5. Have plans to head up that way for some high camping in a few weeks - hope I get that sort of weather.

I was drooling reading this!

I'll be returning to this report no doubt as I still have a couple of these Corbetts on my radar for hopefully sometime in 2017.

Really enjoyed that rockhopper, especially the shot with the boots up enjoying a view out west along Loch Morar. Fantastic weather too that we enjoyed over my 50th Birthday weekend down in Ballachulish and Glencoe, might have bumped into you at the chip shop. Great report

A great tour well photographed and a pleasant surprise to find I've actually been on a small part of it -the westernmost part.

Alteknacker wrote:As you say: a cracking quintet; and what perfect weather for them.

litljortindan wrote: a pleasant surprise to find I've actually been on a small part of it -the westernmost part.

was certainly lucky with the weather despite the wind

weaselmaster wrote: that way for some high camping in a few weeks - hope I get that sort of weather.

not a pretty sight I imagine

PeteR wrote: I still have a couple of these Corbetts on my radar for hopefully sometime in 2017.

will maybe bump into you one of these days

Bod wrote:might have bumped into you at the chip shop.

Great pictures too especially the big stone with the diamond ring.