Had a day off work so thought I'd bag the lonesome but majestic Donald Tinto off. Now getting to this area is quite a challenge if you are not the owner of a car - especially if you're coming up from Dumfries! Stagecoach's 101/102 service stops at Lamington with only just over a tenner return (I was also very lucky that someone wanted on half way between Wiston and Lamington, just as I wanted off!)


It was drizzly-light rain walking into Wiston but cleared up as I began my ascent, with Tinto looming overhead.

My first ever view of Tinto, just after getting off the bus: Wiston is a lovely place and the woodland inside Wiston Lodge was beautiful, with late bluebells still in deep purple swathes. I was following the WH route - got a little confused after the water works building but just jumped the fence and returned back to the edge of the field. As I approached the small Scots Pine plantation, a field of cows with calves had put themselves right in front of where I needed to go - there was one particular cow that was clearly separated so I backed off a bit and coaxed her back to the herd so I could tiptoe my way around. They were fine after I'd got them all back together.

Smart and Silly (best photo of the day?): Finally I began the ascent with Pap Craig looming above: Blaeberry carpets were prominent throughout the day: The myriad of faint paths here meant that I just took whichever one seemed to be in front of me - the OS track was obvious from below but it seemed to vanish as I actually got up there. I ended up just a bit to the right of Pap Craig so paid it's top a visit.

Summit of Pap Craig from above: This route really was surprisingly steep - my legs are still hurting today (3 days later), but the last 200m or so is much easier, with the red sandstone starting to appear. Now I had seen nobody else on my way up yet just as I peeked over to see the summit cairn, I was greeted by at least 100 grumpy schoolchildren who really couldn't have given a toss

I generally climb hills to get a break for myself, but now here I am at 711m looking like the weirdo that chose out of my own volition to come and climb a hill!

Spoiled but not ruined: I took a few pictures, visited the trig and was off. I had hoped to relax for a bit at the top as I hadn't eaten or drank anything yet but that was cut short. I suppose when WH describe Tinto as 'extremely popular', they mean it.

Over to the source of the Clyde and the Lowther Range (my first, and most recent Donalds): I galloped my way back downhill but forgot about following the paths so went on a small diversion that took me through some deep heather back to the path: I had a big decision to make now - I was getting the bus at Lamington in 3 hours but I'll be there in about an hour so do i have time for one of the 2 hills nearby (Dungavel Hill or Lamington Hill)? Dungavel looked a bit intense so I opted for Lamington. I quickly searched through WH for a good route up. To my luck I found a glorious route suggested by Inca who began at the Holy Trinity Chapel (a minute walk from the bus stop!)
I began my very fast paced walk over to Lamington, with a few bursts of jogging now and then. I had to leave the photos for the time being as I was in quite a hurry, although I did get one over the Clyde. The weather was much better than the gloominess the day had started with. The Holy Trinity Chapel was a beautifully Albionic place. I dumped my bag behind a tree, taking only my phone and began my ascent. Inca said it took them 40 mins to get to the top, although I was determined to do it faster. My account of the walk up is essentially identical to theirs (only my day was much sunnier)!

I continued up through the woodlands and eventually reached the clearing: 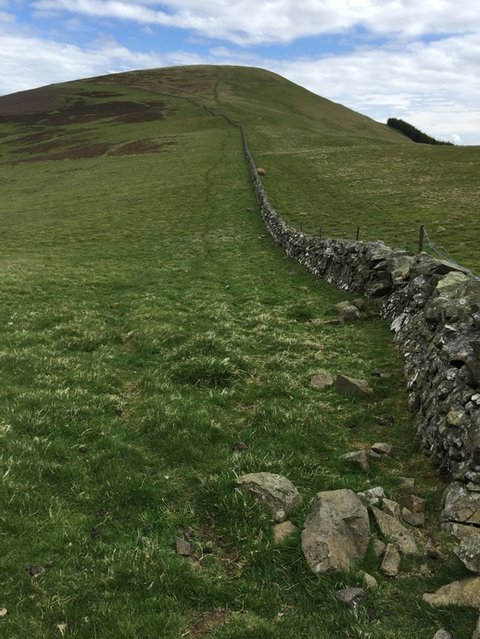 Lamington Hill doesn't even feel close to 492m. I found someones walking stick on the way up so used it to get to the top in only half an hour!

ATV tracks to the summit trig: The views here were in fact better than Tinto's as the weather had cleared up and I could see where I'd been all day. I also had a great view into the Culter Fells, particularly Hudderstone.

I also got the best view of Tinto I'd had all day: I left the stick at the top and made my way back down, going through the left hand side of the dry stone dyke so I could see into the woodland better- Blaeberry was out in force in a way I'd never seen before; a foot-high lime green blanket taking up every spare inch of the Larch forest.
Back down through the woodland I went, taking a few pictures of more bluebells just before the timber stacks. I had been up and down in only 50 minutes so had a spare half hour to sit by the chapel to drink from my flask which I hadn't touched all day, while the fragmenting sunlight bared down onto the vibrant cemetery flowers.

A wonderful day that was at first somewhat spoiled but very quickly made up for.

Two very enjoyable hills.......and you had nice weather for them. Nice one

PeteR wrote:Two very enjoyable hills.......and you had nice weather for them. Nice one

Thanks Pete, glad to see you've been out and about as well - TalkHighlands seems to be just you now!

Love the shot of the summit of Tinto - it was even busier when I was up there on a sunny Saturday, still a nice little leg stretcher.
Like Pete I also enjoyed Lamington and most of the Borders hills

That's a heck of a bus journey from Dumfries. Glad it paid off for you

Fife Flyer wrote:Love the shot of the summit of Tinto - it was even busier when I was up there on a sunny Saturday, still a nice little leg stretcher.
Like Pete I also enjoyed Lamington and most of the Borders hills

I should have stood at the trig and done a panorama! Think that picture shows just over half of them

Got plans on Thursday for the Carsphairn Hills so I can finally start bagging some more Donalds - Tinto was my first Donald after 9 months (uni. really doesn't give you much time!)

That's a heck of a bus journey from Dumfries. Glad it paid off for you

Lamington seems to be quite an underrated hill; not been up such a pleasant marilyn in a while. I did see somebody with their dog at the very bottom of the glen to the south, beside 'Key Cleuch' and a man in his workshop beside the church but was person-less except that! Glad to have done your report justice