Lochnagar and a night at Gelder Shiel

Lochnagar and a night at Gelder Shiel

I had just walked out from Bob Scott's bothy in the Cairngorms and met my brother-in-law Stuart in Braemar. We had set this weekend aside for going to Gelder Shiel bothy a couple of months ago, but I hadn't really expected to be arriving in Deeside by foot back then.

Although the weather was set to turn later on, just now it was a scorcher of a Whitsun bank holiday, and the roads were busy. Unsurprisingly, At Balmoral things were busier still, with the carparks full and throngs of tourists wandering about. Last time I was here it had been pretty quiet, but today there were armed police in attendance. I wondered whether this was down to recent terrorist attacks or because some of the Royals were in residence.


Lochnagar.gpx Open full screen  NB: Walkhighlands is not responsible for the accuracy of gpx files in users posts
With difficulty, we got parked on the verge at Easter Balmoral and set off through the houses. We somehow managed to take a wrong turn and were directed back by more armed police. Once in the woods, the rest of the walk was easy (although I'd prefer not to have been carrying the 10kg of coal that I had suggested Stuart bring along. We barely needed it in this heat!)

Lochnagar from the edge of the Balmoral woods: 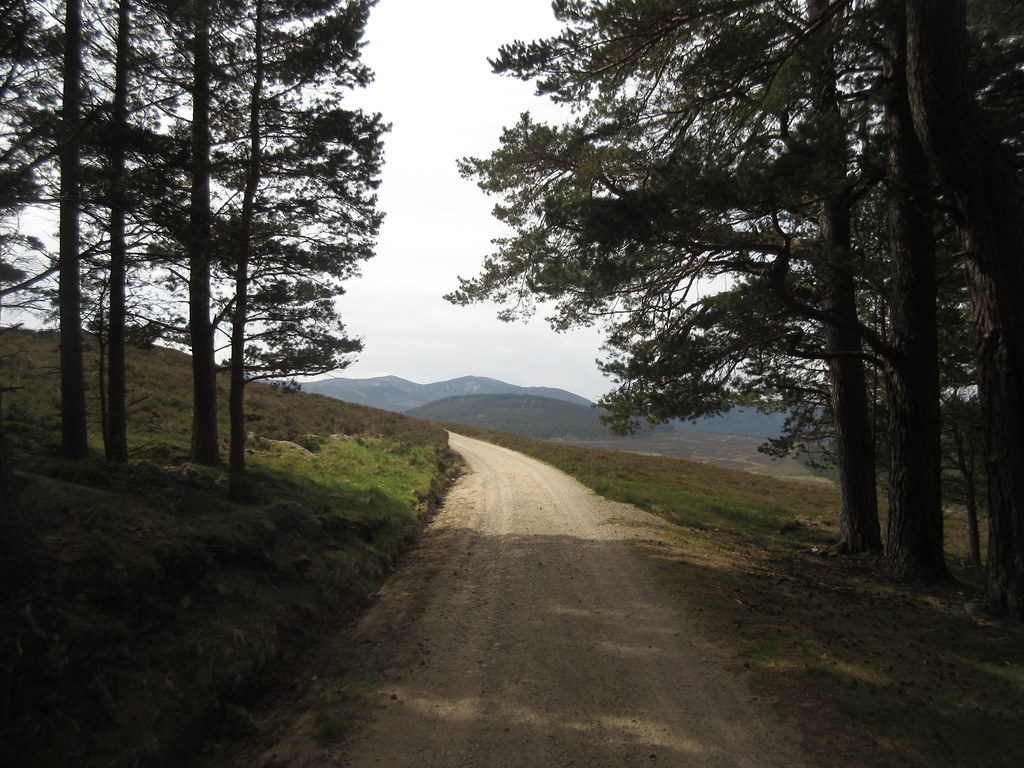 We reached Gelder Shiel after an hour and 10 minutes or so - lunchtime, pretty much. Like Bob Scott's the night before, I had no idea whether this bothy would be packed out or not, but there was no-one there when we arrived. Dumping our stuff and having a bite to eat before heading back out onto Lochnagar, Stuart was looking out of the window. "There's the queen!" he said. I had a feeling he had been waiting to say that since he'd got up this morning, but when I wandered over, I saw that it really was! She had driven herself up in a Range Rover and was hauling a picnic basket out of the back seat, corgis jumping and yapping around her.

By the time we left the bothy again, she had disappeared - either into the cottage or her Range Rover, and from another 4x4, her security guard was on us pretty quickly, asking where we'd come from and how long we'd been there. He was very polite, but also seemed very pleased that we were leaving and planning to be away for a good few hours. I think he was a bit embarrassed that he hadn't checked out the bothy or spotted us when he had first turned up.

Approaching Lochnagar from the North: 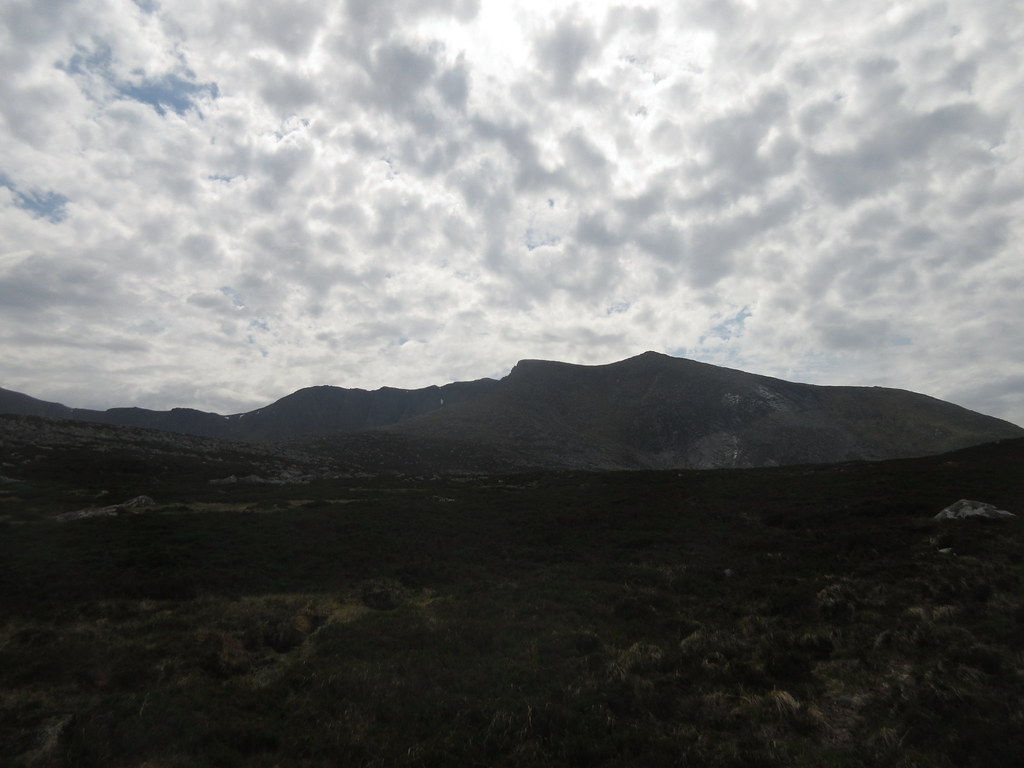 I had changed my mind a few times about the best plan for Lochnagar, and I changed it again now. I could see the track between Conachcraig and Meikle Pap snaking away into the distance, not quite in the right direction, and it looked long and dusty. I decided we should take the most direct route up, and come down the 'easy' way, so we wandered over the bridge just past the bothy, and onwards along the track which almost makes a beeline for the summit.

I knew from my last visit to this area that the track ended and there was only a very faint path through the heather after that. That time, I had lost it, but I had also been more concerned with finding a way up Meall Coure na Saobhaidhe. This time, we would just go where the path led us - I assumed it would get us onto Lochnagar one way or another.

Stuart filling up with water: 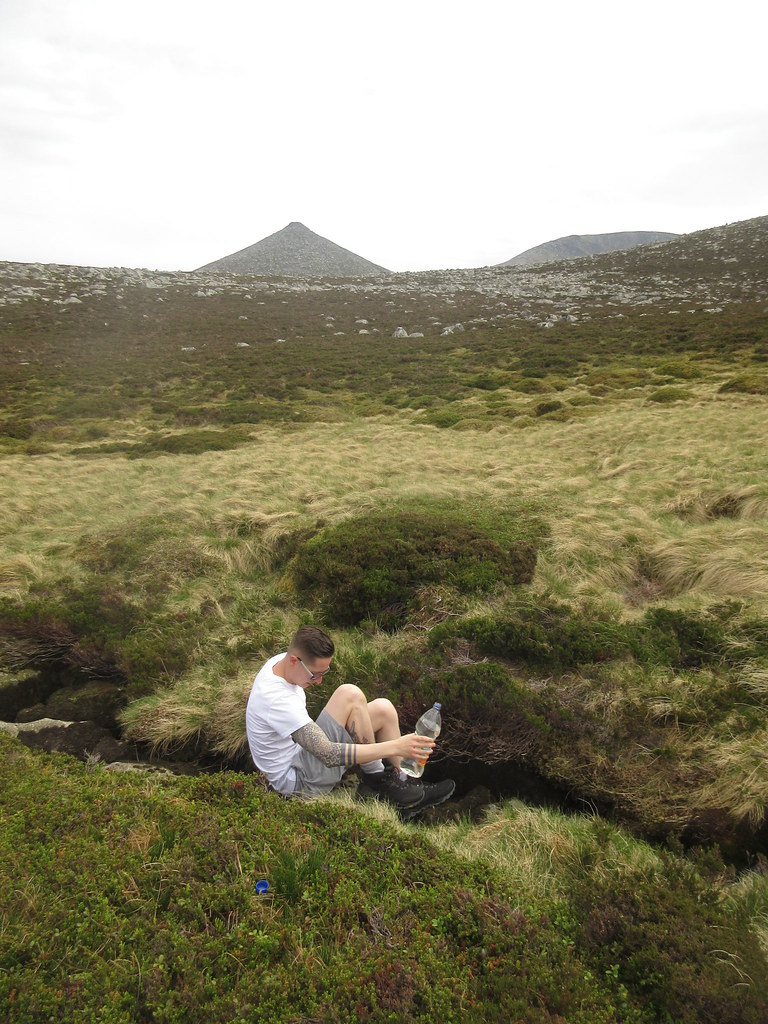 We passed 4 or 5 people - certainly the quiet side of this hill. Stuart was needing to stop quite often for water - this was probably a good thing for me as well, as I quite often don't bother, then wonder why I'm so dehydrated later on in the evening. This was perhaps not turning out to be the best way up - in Coire na Saobhaidhe, the path is all but non-existent and apart from the odd grassy run, it feels like Graham territory. Eventually we arrived on the col to the N of Cac Carn Beag, which is where the steep ascent started.

Slabs on the N face of Cac Carn Beag: 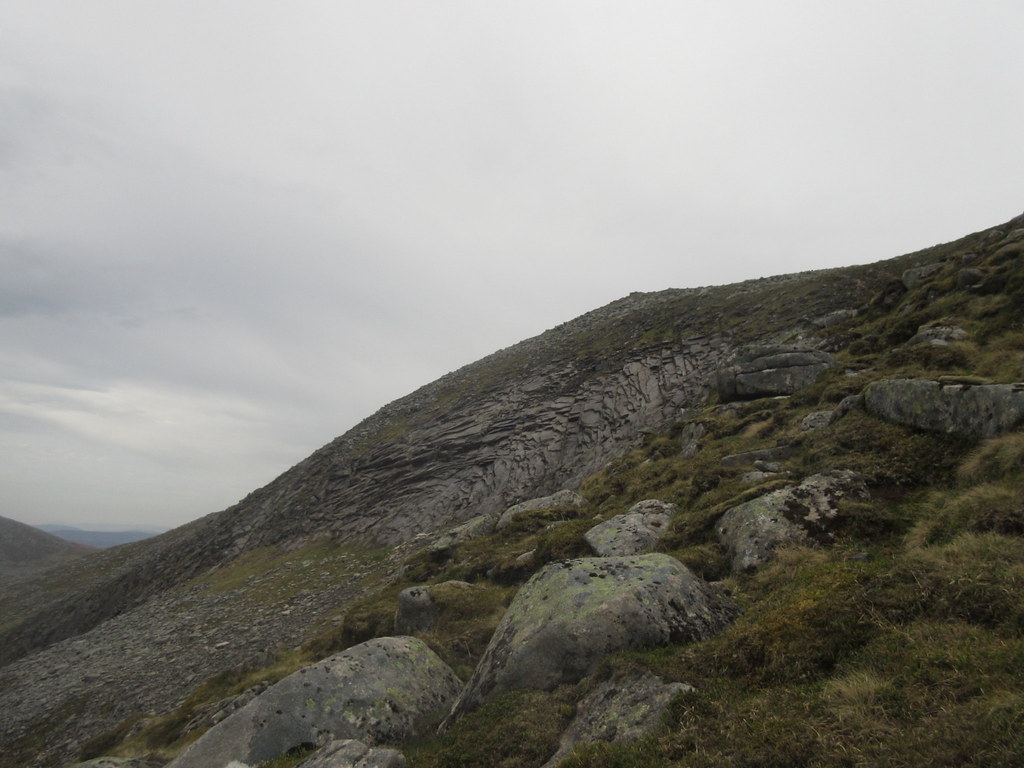 Stuart was struggling with this, and to make matters worse, it started to rain. I pushed him a bit, breaking the ascent down into short segments, but he looked almost dead. He only really has one pace, and it isn't slow at all; fine on the flat and easier angled stuff, but on this steep section, he was just completely killing himself, and having to stop every minute or so. I would have pushed him more, but this was precisely the sort of hot and humid weather that could induce heat stroke into someone not used to this sort of thing, so I decided it was best not to.

In the end, he decided to sit down and take a break while I went on to the summit. Then he would start descending the same way. I dashed off - it took me precisely 7 minutes to get from where I left him to the top, so perhaps I should have persuaded him up that last bit somehow. The top was busy, but although there was a view, the rain was spitting quite threateningly. If I'm honest, I wasn't too unhappy with the way things had worked out, as I hadn't fancied the idea of the long traverse over to Cuidhe Crom with the threat of a thunderstorm over us. At least our way down would drop us off the plateau pretty quickly. Also, if we'd come up via Meikle Pap and the 'normal' route, we would still have been nowhere near the top when the rain started. 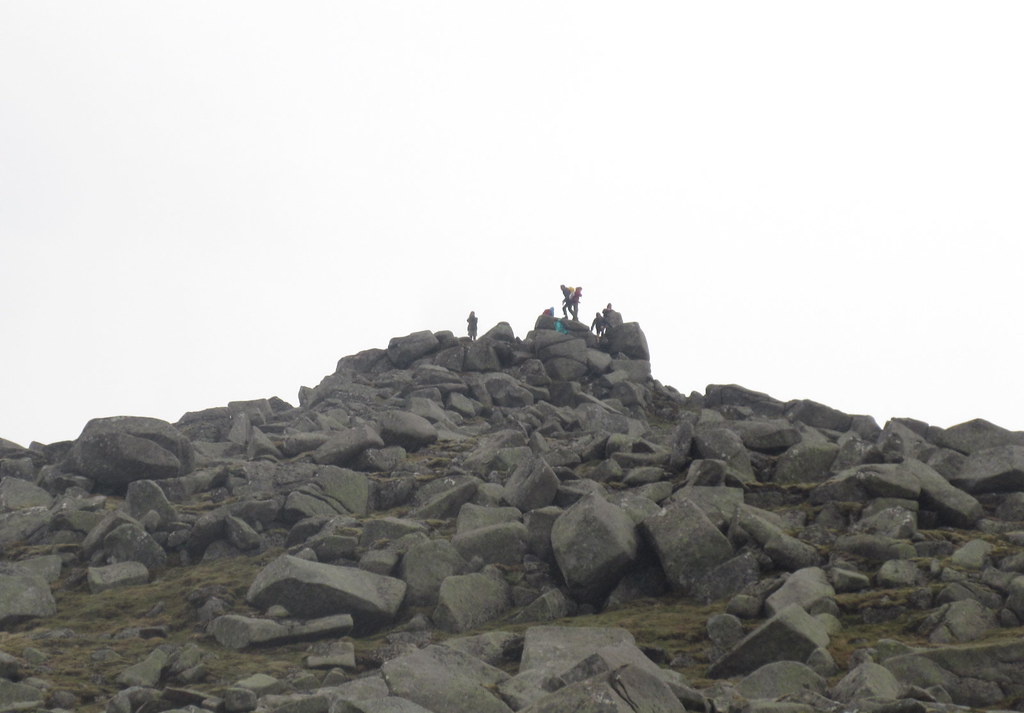 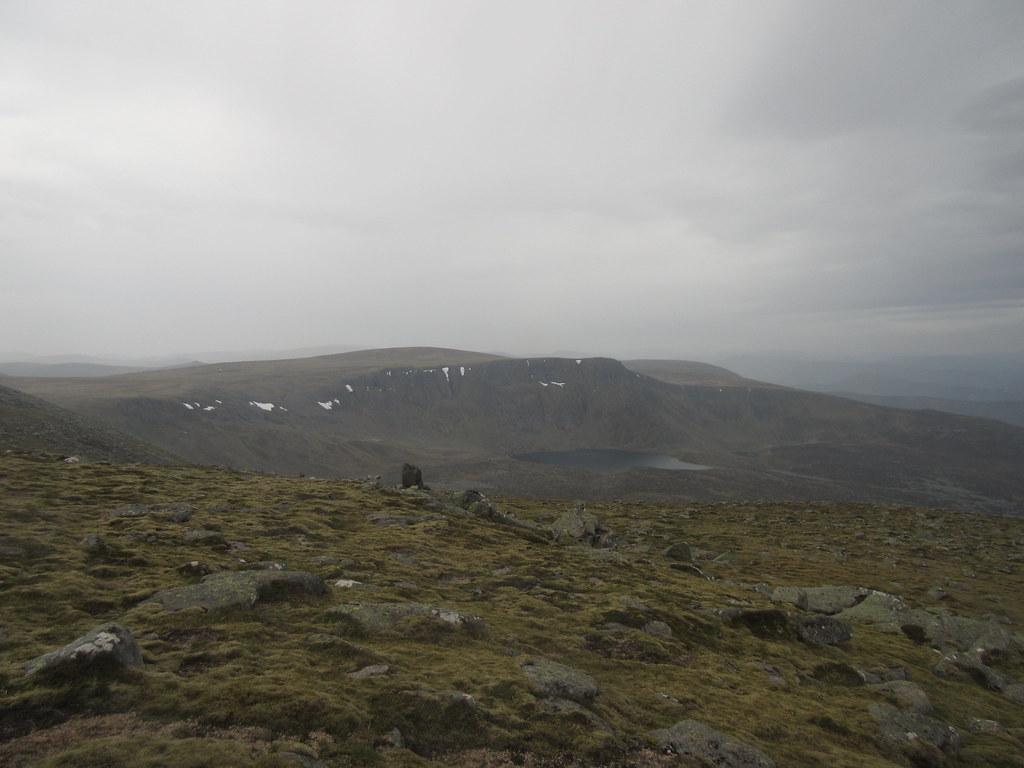 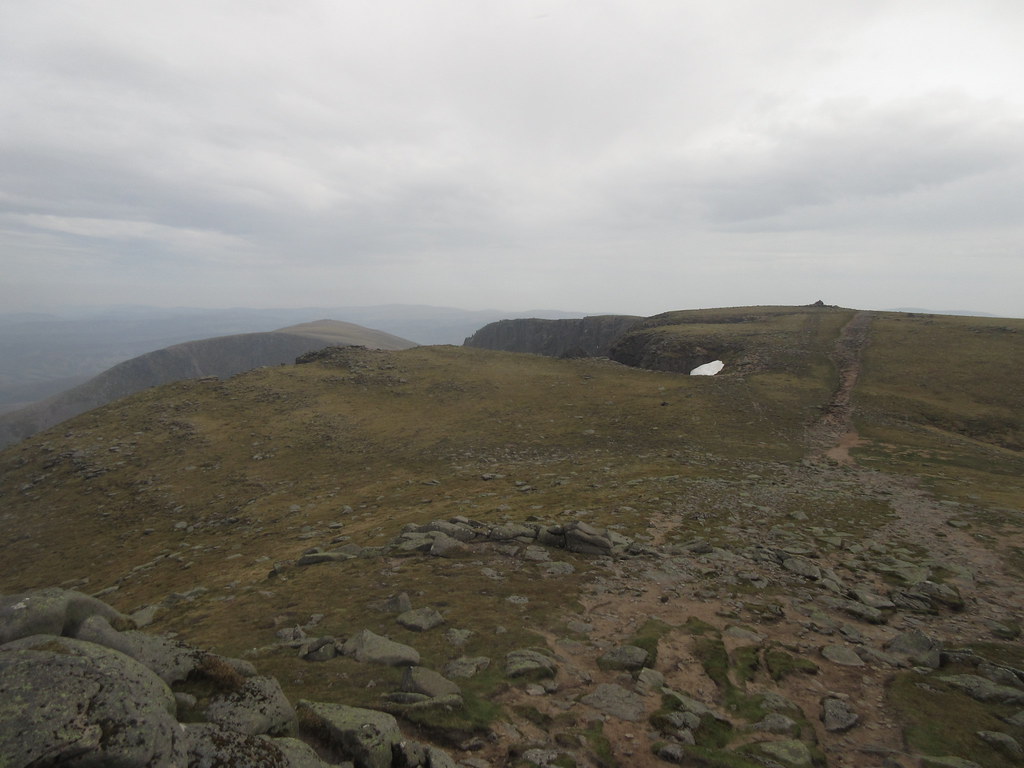 I made a quick descent, retracing my steps, and caught Stuart up before he'd reached the col. I felt that I'd failed a bit, as this was to be his first Munro, and he might have made it if we'd taken a different approach. But I don't think he was too bothered - he seems to get more out of the bothying part of these trips than the walking.

Interesting skies on the descent back to Gelder Shiel: 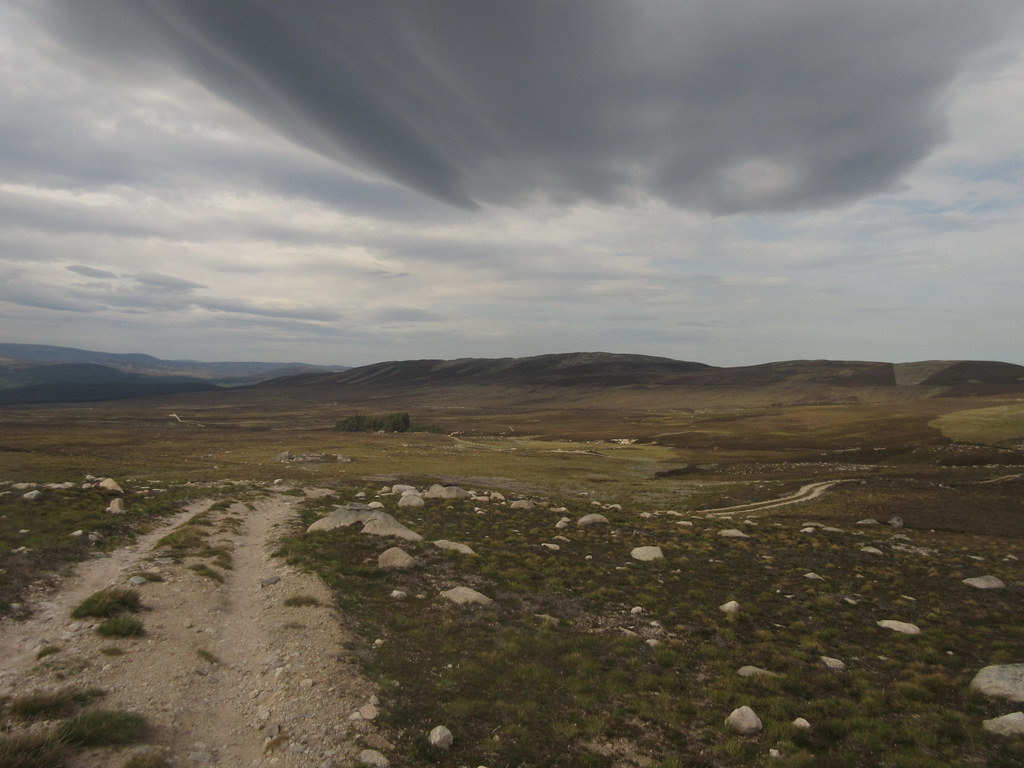 I was wrong about the weather. By the time we'd retraced our steps through all that irritating heather, the sun was back out again, and it was a lovely warm evening - the expected thunderstorm hadn't made it to Deeside. For me, the Lochnagar part of the walk had been pretty easy, but the early start and strain of lugging my heavy rucksack over the Cairngorms the day before all added up to make me feel pretty knackered, so we were both glad to sit outside the bothy in the sun with a couple of beers while getting the dinner ready. With no midges and temperatures in the high teens again, it was a far cry from our last bothy trip back in early March.

Gelder Shiel bothy (behind the cottage): 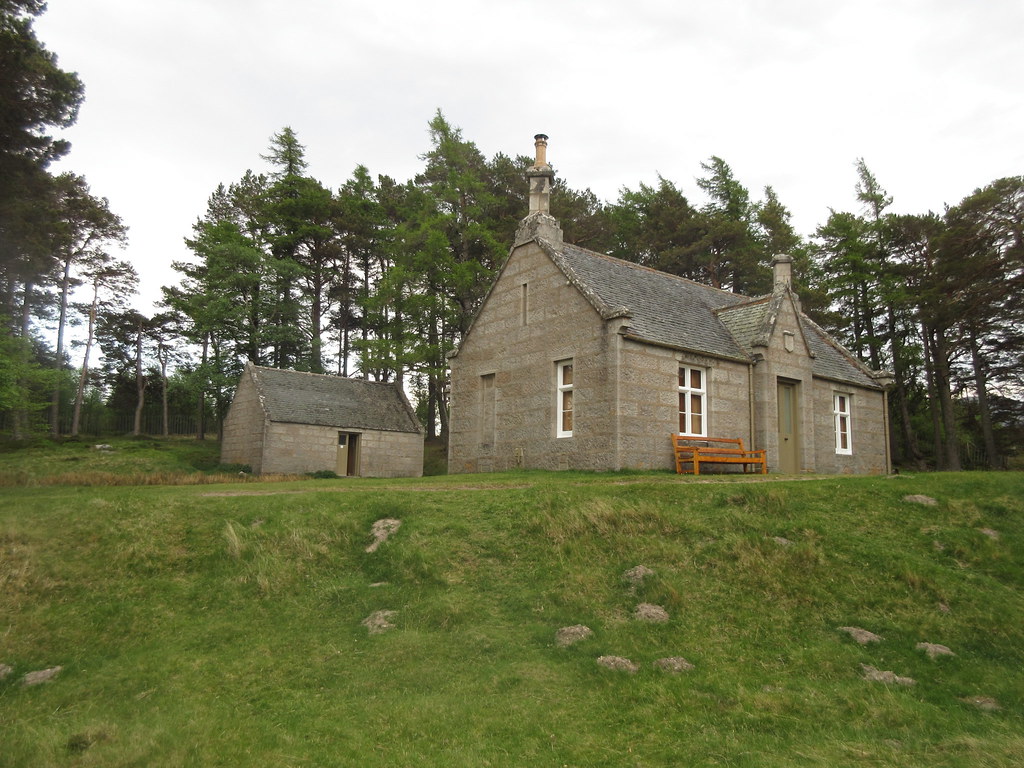 Inside, with the new stove: 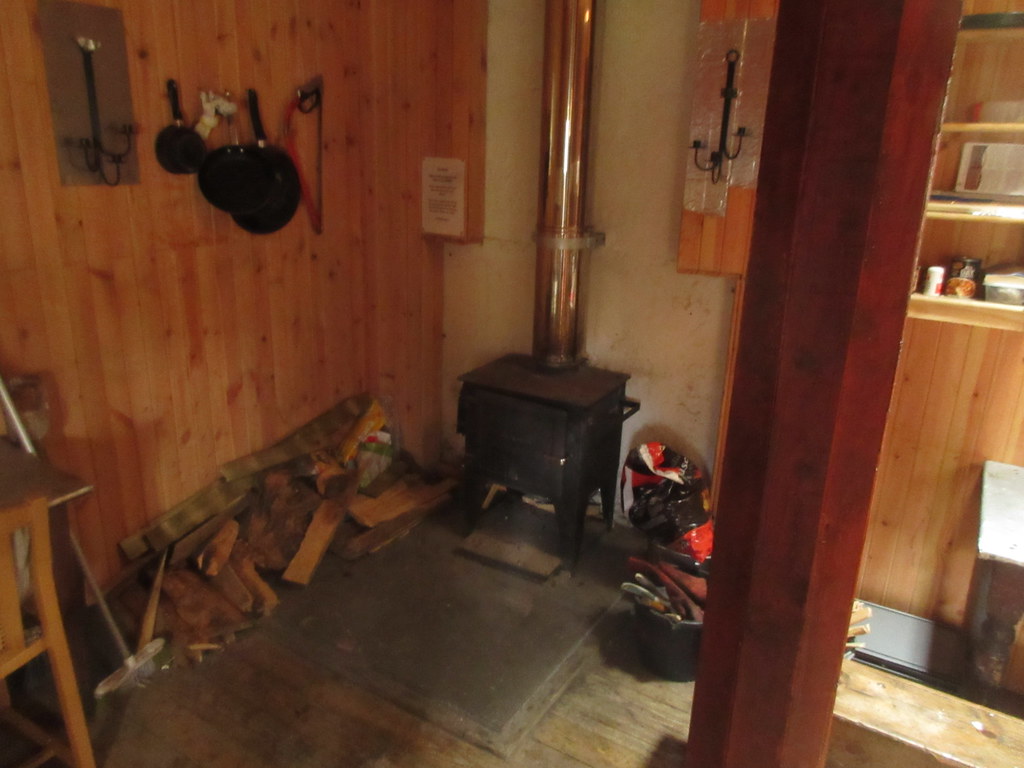 The rain finally came on at around 8pm, and we retreated inside and lit the stove (a new addition to the bothy since I was last here). For all the busyness of the weekend, we had the place to ourselves (the queen was long gone by now!) It was always a pleasant enough place, but with the addition of the stove, some floorboards, velux windows and cladding, it's almost up to bunkhouse standard. The best part of a bottle of whisky later, it was time for bed.
___________________________________________

On our last bothy trip together, I had been embarrassingly drunk, and very much the worse for wear the following morning. This time round, despite seemingly drinking a similar amount, there had been no such nonsense and I woke up feeling pretty fresh. We didn't have much to do today - just wander back to the car and head down to Dundee, where we were both due at our mother-in-law's birthday barbeque.

Culardoch and Ben Avon on the walk out: 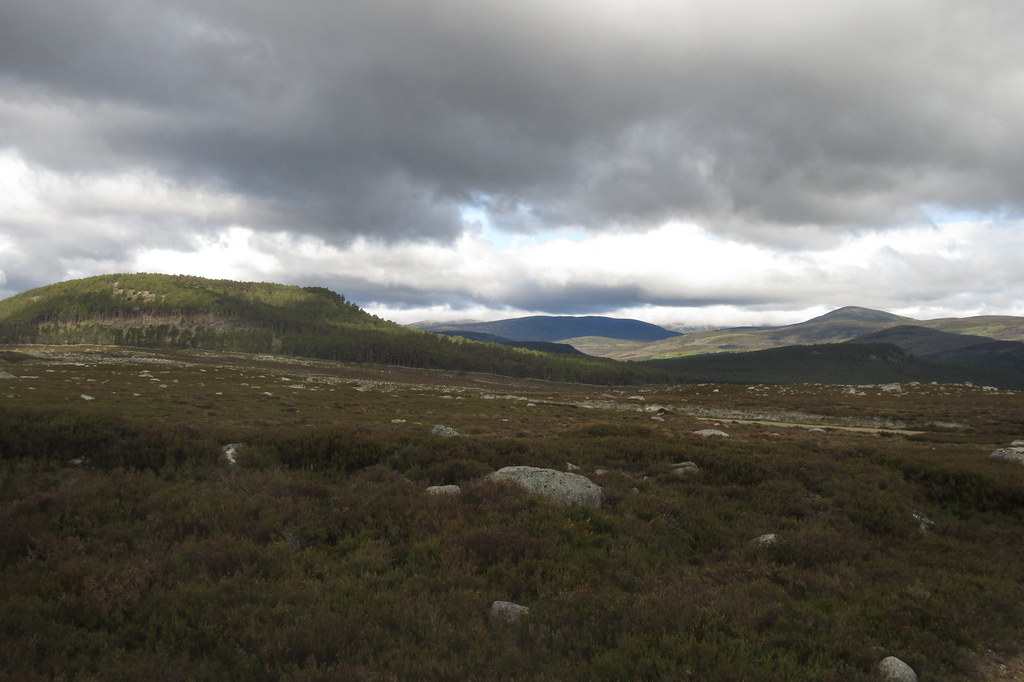 Looking back to Lochnagar: 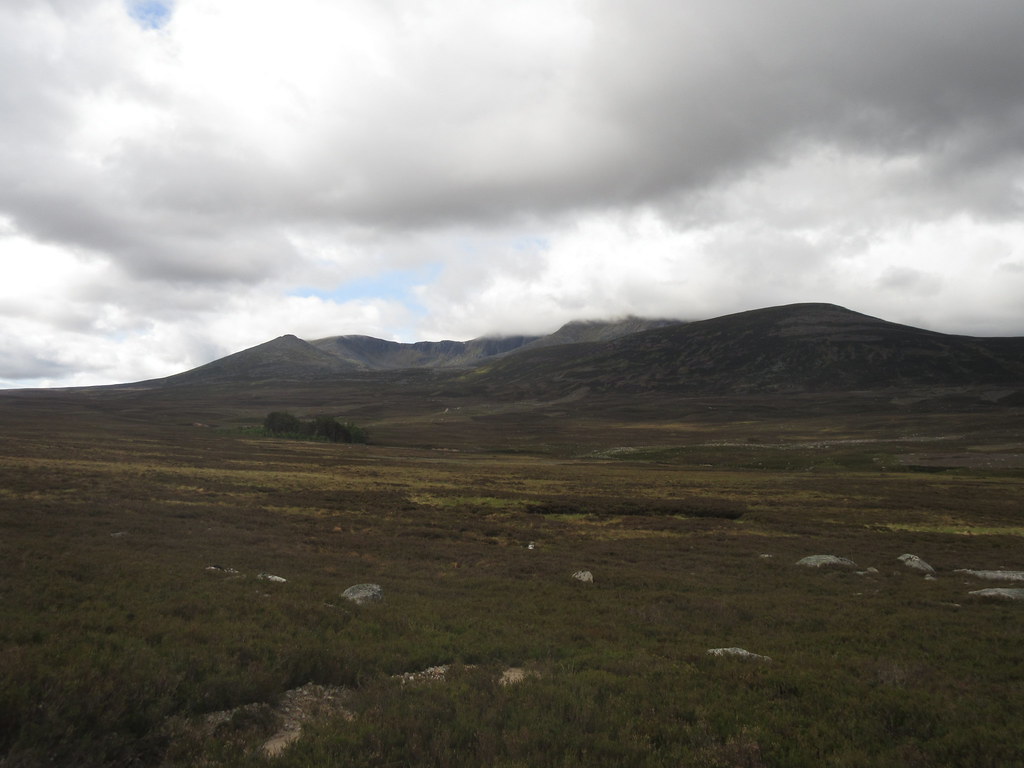 The air was much fresher feeling today, but it was still pretty warm in the sun. Once back in the woods, I remembered a report written by Portyhendo that had taken a tour of the various memorials to royals long dead. Neither of us are particularly fans of the monarchy, but I remembered a couple of the memorials being pretty impressive. A short detour past Prince Albert and Princess Beatrice's cairns would vary the last section of the walk.

A detour on the way back to the car…. 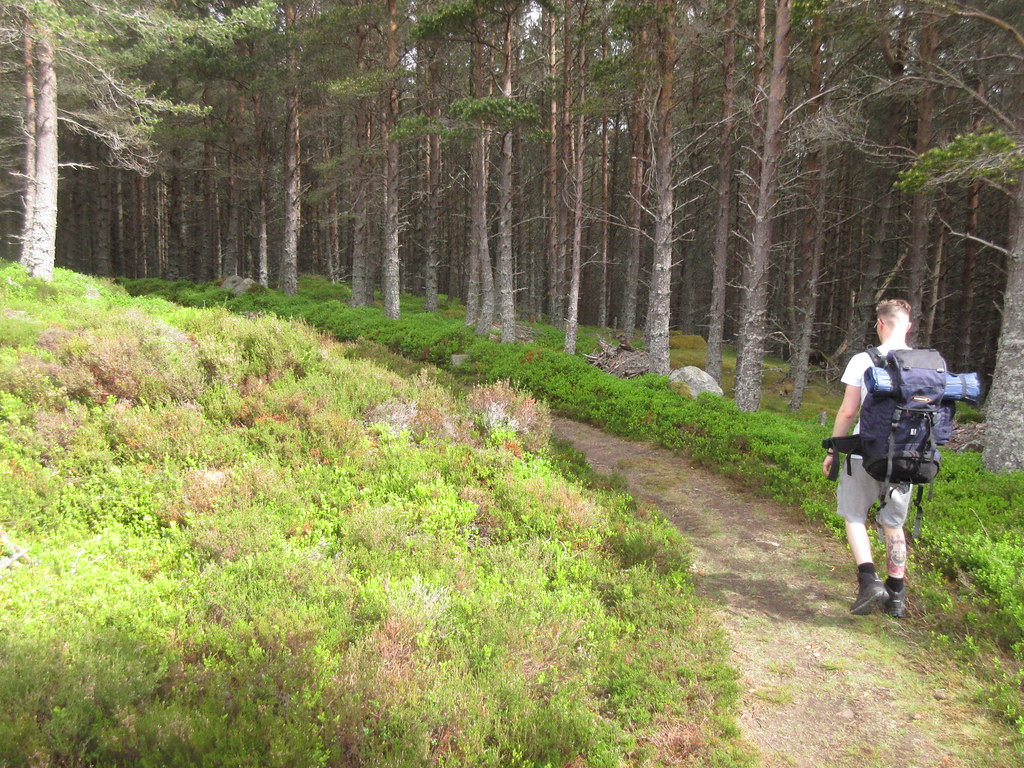 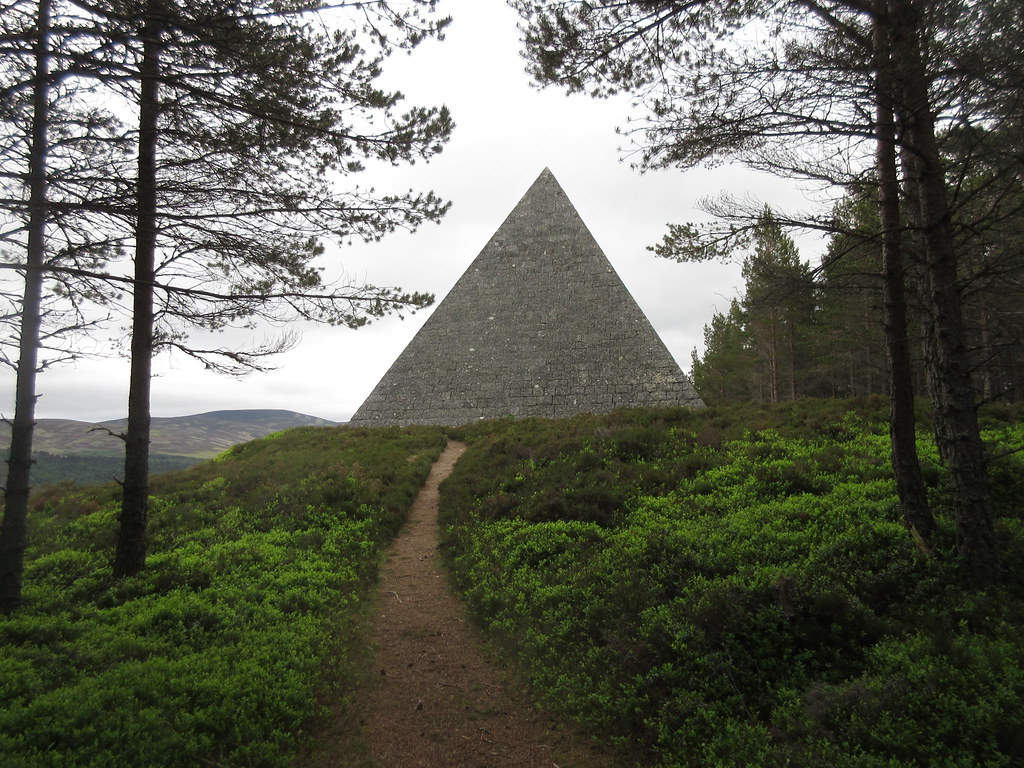 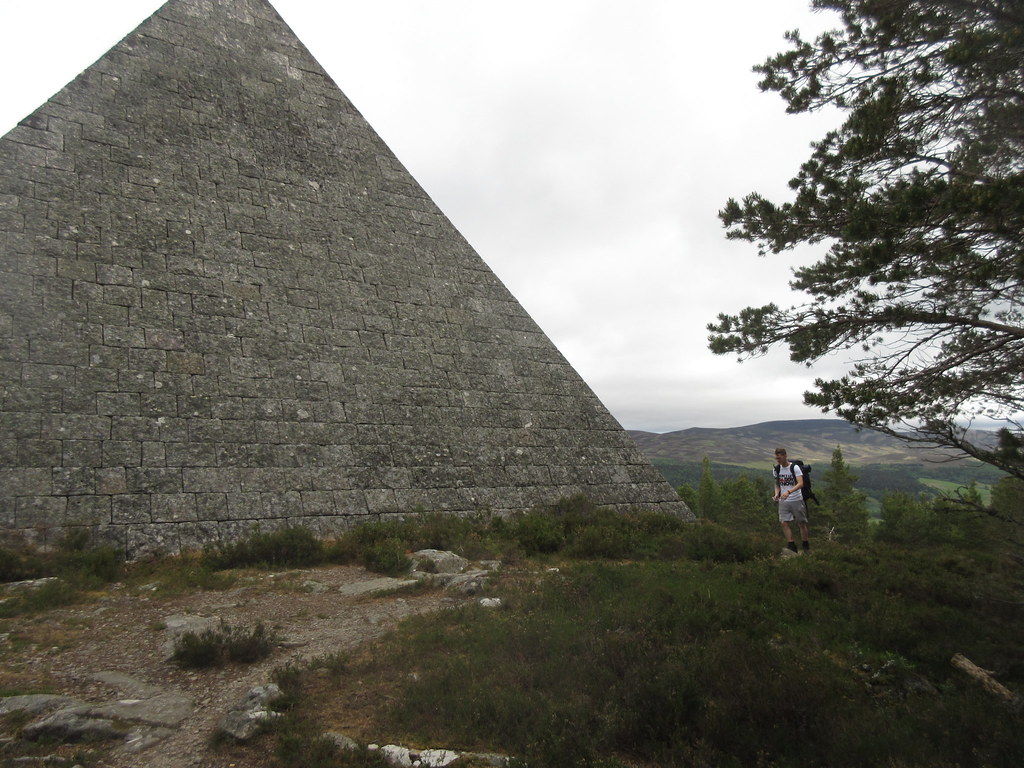 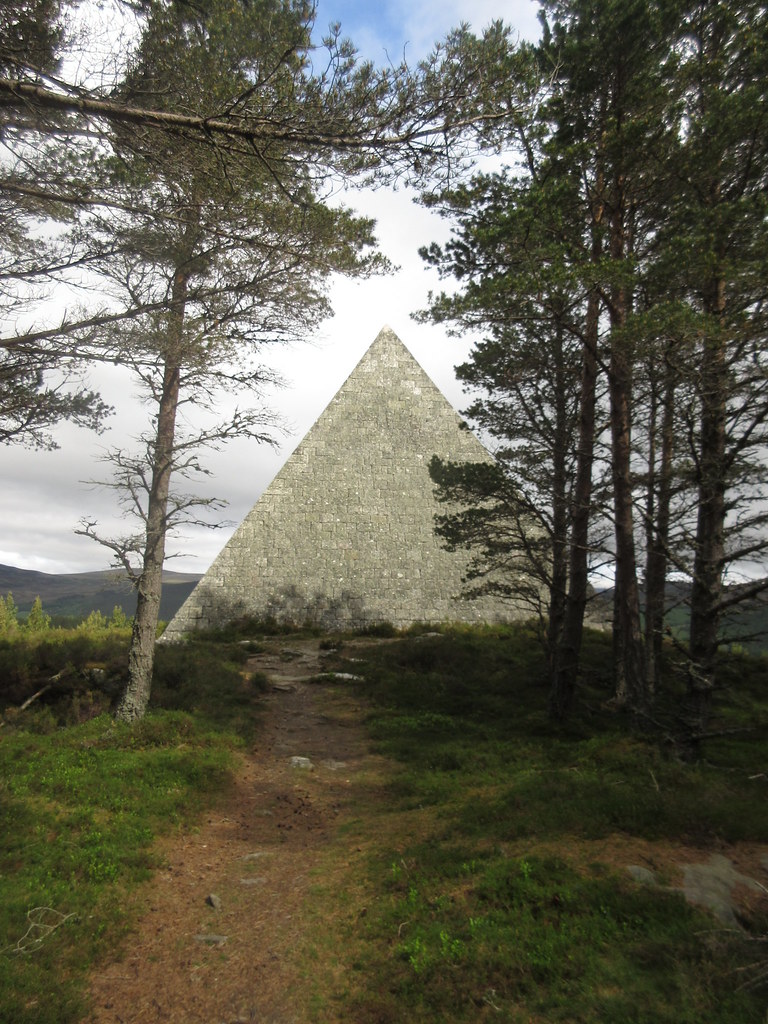 While the paths were good, they were devoid of the usual signposts and railings that I had half expected, and if you didn't know these memorials were there, you would probably never see them. Next thing we knew, we were back at Easter Balmoral and the car. We tried to find a café for a bacon roll and some coffee in Braemar, but everything was either shut or queued up with cyclists who were doing the Three Pistes sportive. So we gave up and went to the café at the Cairnwell, which doesn't exactly set the world on fire with its coffee, but provided the needed caffeine shot and grease quotient.

An interesting and enjoyable weekend all in all, and a good warmup for the trip to Kearvaig that we have planned in a few weeks. Something tells me we won't hit the same weather jackpot on that one though!

Re: Lochnagar and a night at Gelder Shiel

Of all the things that can go wrong when out on the hills. I have never thought of being mistakenly taken out by the Queens bodyguards.

I bet thats a day you wont forget.