Well, I suppose being guilty of favouring fair weather munro bagging the title suggests we'd rather not set off walking in anything worse than overcast or clagged out.
It's true to a certain extent, but we just had to get out, the weather for most of our time on Arran last week was damp to put it mildly

, we decided to take things as they came and go for something simple.

The forecasters were not promising good weather but there was a chance of things improving around
mid-afternoon, we set off from Cannich thinking we'd stand a better chance a bit further south than the munros around Glen Affric.

We've still got some straight forward munros to do and the Loch Lochy Munros are a pair I've saved for iffy weather, they are a bit of a trek from Cannich, 42 mls, but we did have the option and decided to give 'em a go

The drive down to Kilfinnan was in the rain, ah well, it was forecast

arriving at Kilfinnan we parked up on the verge and got ready, it had stopped raining but the waterproofs went on just in case.

We set off. The cloud was very low, just above the trees in places, I think that was due to the humidity, it was pretty warm after all.
From the farm, the track you follow is excellent, just follow W.H walk description and you can't go wrong.

The track looking back. 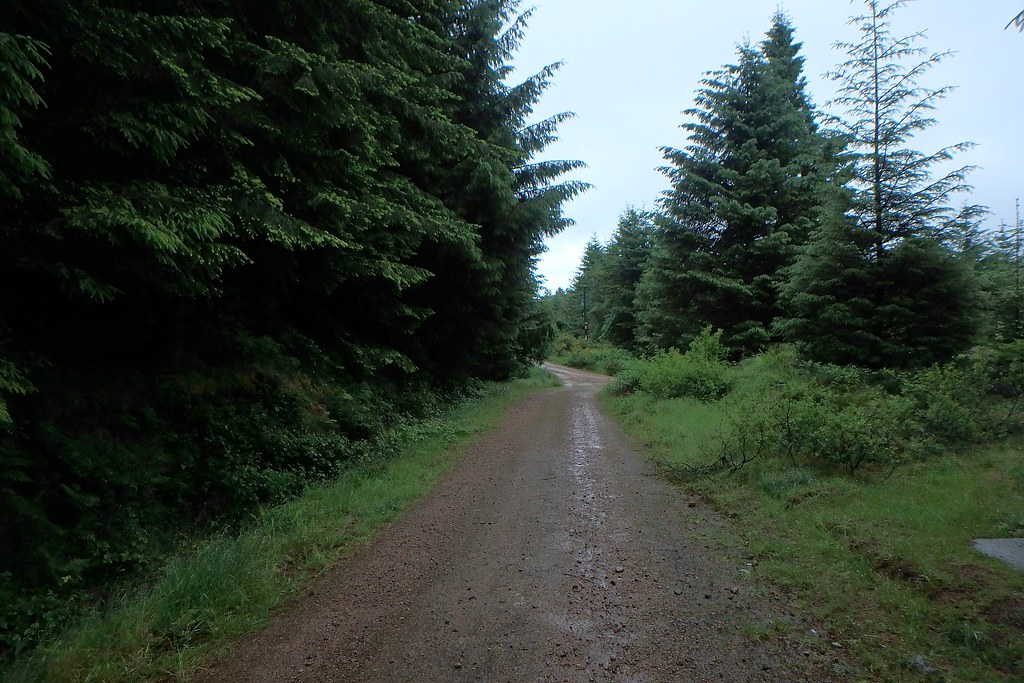 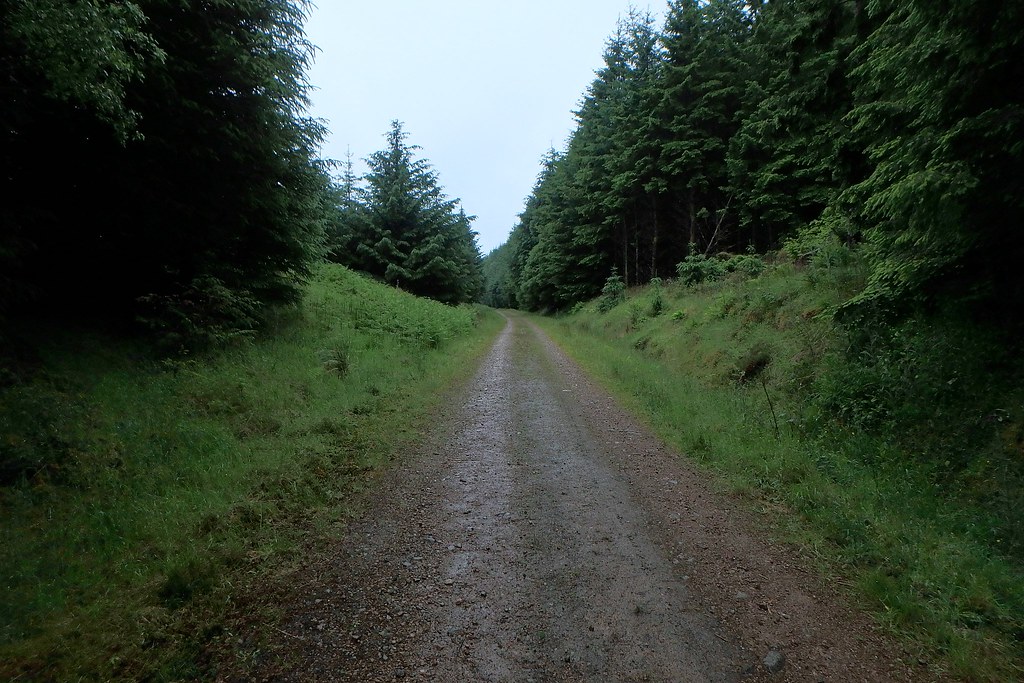 The path through the woods is clearly marked, it was here the rain started.

The walk through the trees is steep to start with but when the trees are left behind it eases all the way to the bealach, this is a good section and soon gets you there

At the bealach we were in the clag, it was chucking it down, we thought of turning back, but no, we'd got here, we were damp but comfortable and we were still hoping it would cheer up.

The ascent from the bealach up Sron a' Choire Ghairbh is on a good path, height is gained quickly and with ease, just before the grassy ridge the path become a bit vague, in the clag we just headed for the other side of the grassy ridge and followed the edge up to the summit cairn, gaining the path again just a few meters short of the summit.

On the top it was very windy and the rain was hammering hard against us, we were well chuffed that we'd finally said sod off to the weather and got our first Munro of the holiday done at last

Soggy on the top. 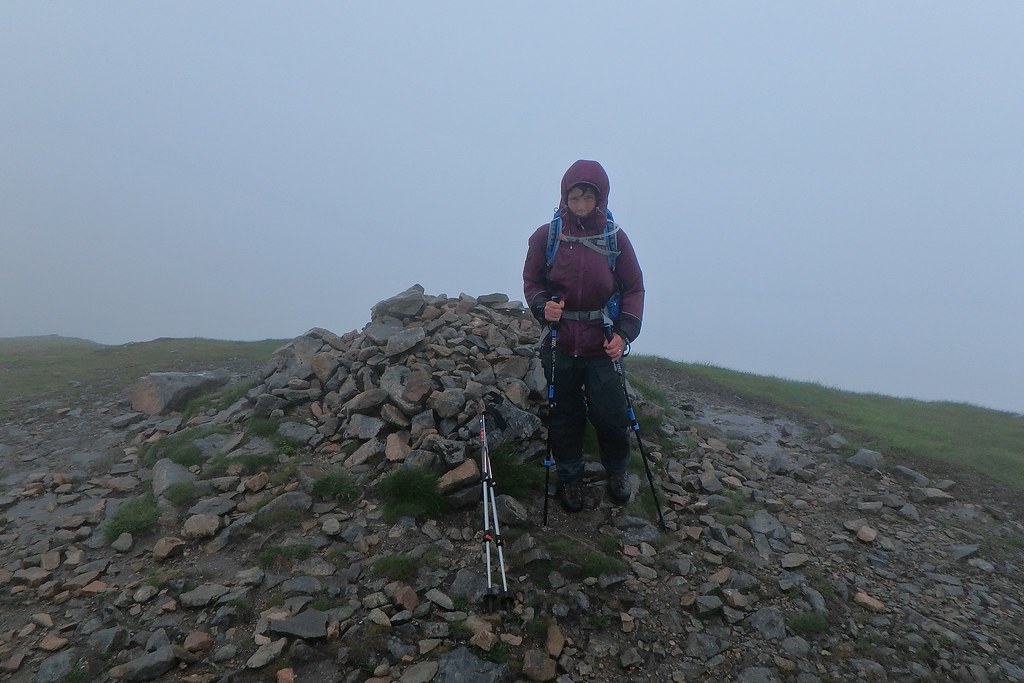 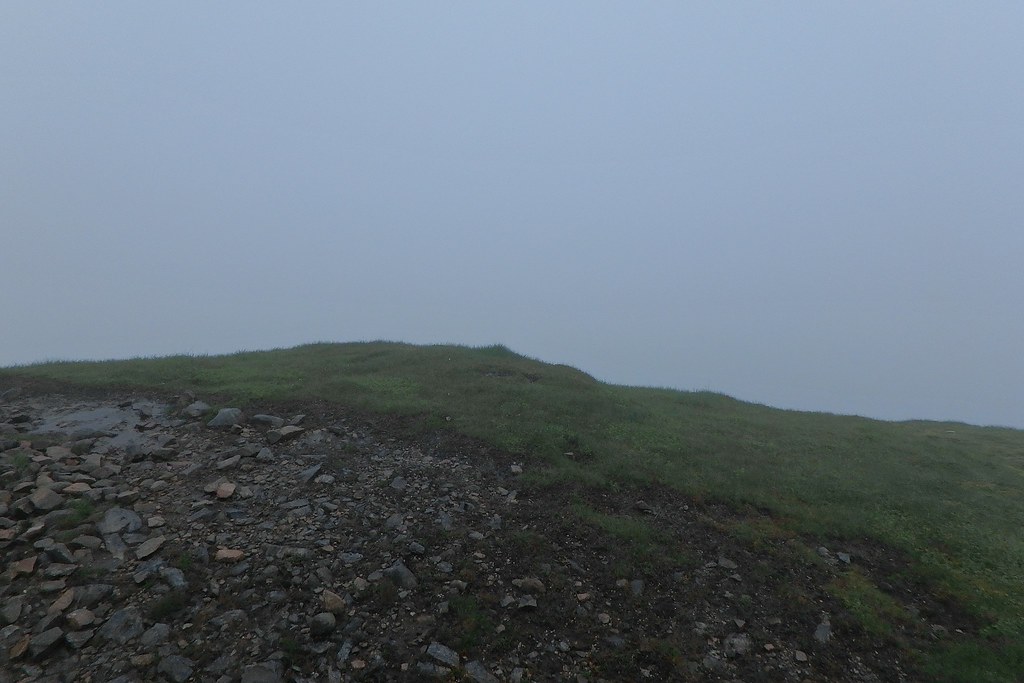 We had a very quick snack and photo stop and were off back down to the bealach. In the clag we wondered off the path so, after about 5 mins from the top we just headed south and found the path again

About 30 or 40 mtrs above the bealach the cloud lifted enough to see our next target, well, the path from the bealach at least, we decided to carry on thinking it would clear on the next one. 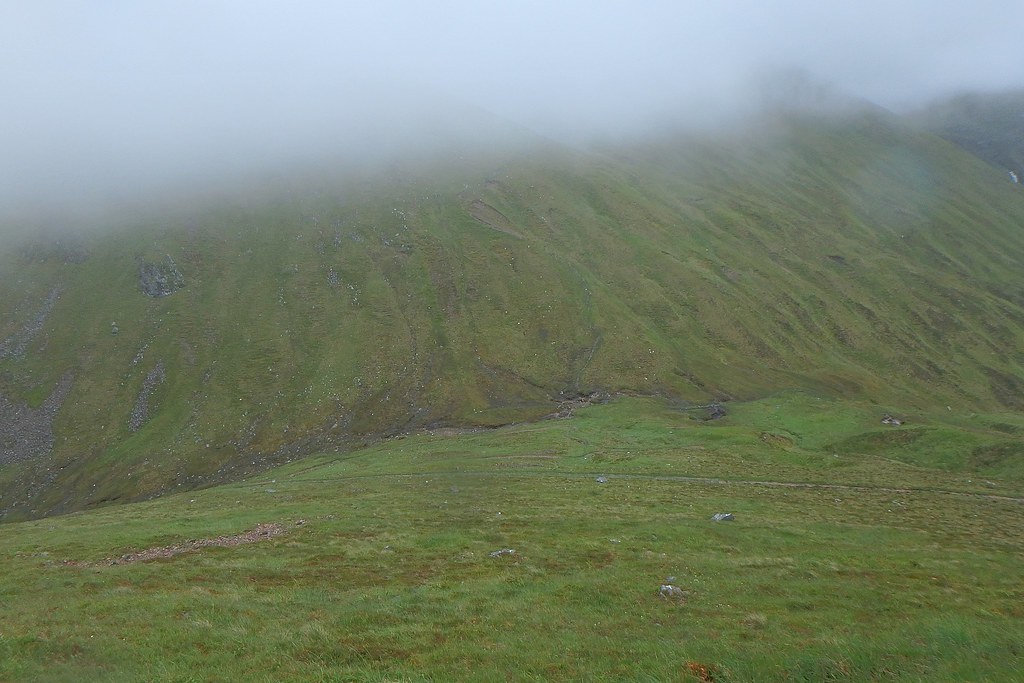 First hint of views towards Knoydart. 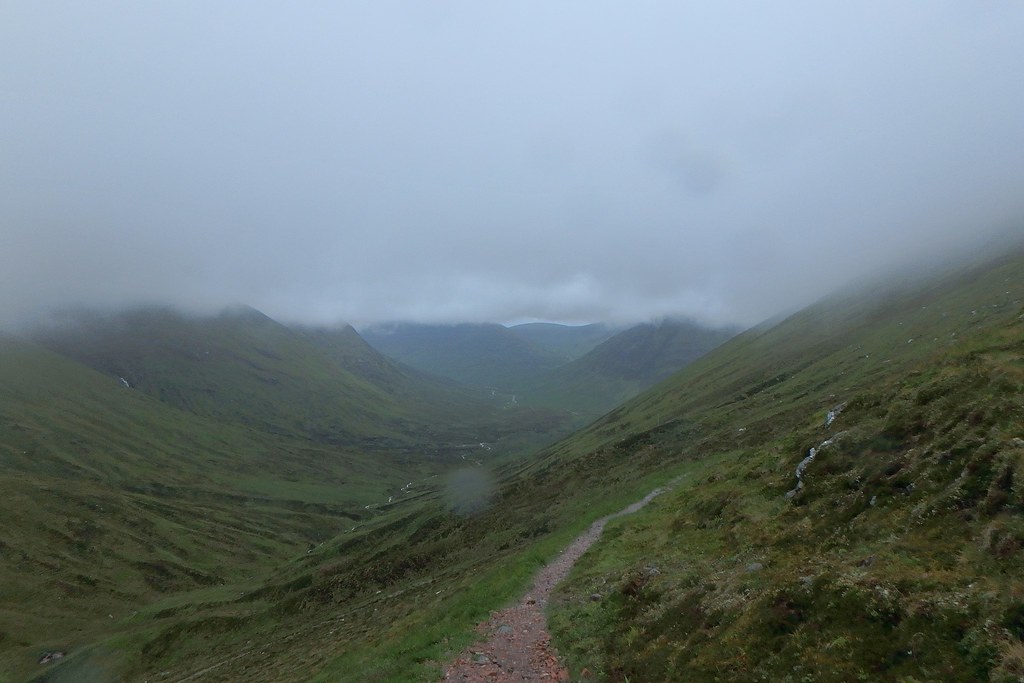 In the bealach we had a quick bite to eat and then headed up Meall na Teanga. By now the rain had stopped and the cloud was lifting, in fact, lifting enough to see the mountains of Knoydart, all looking a bit moody but at least we got the general idea of their remoteness.

The climb up from the bealach is easy enough, the path is a bit soggy and bouldery to start with but it improves once in the bealach between Meall Dubh and Meall na Teanga, there's one little steep bit to gain the ridge from here but once there, the climb to the summit is much steadier.

Looking up towards the summit of Meall na Teanga from the bealach below Meall Dubh. 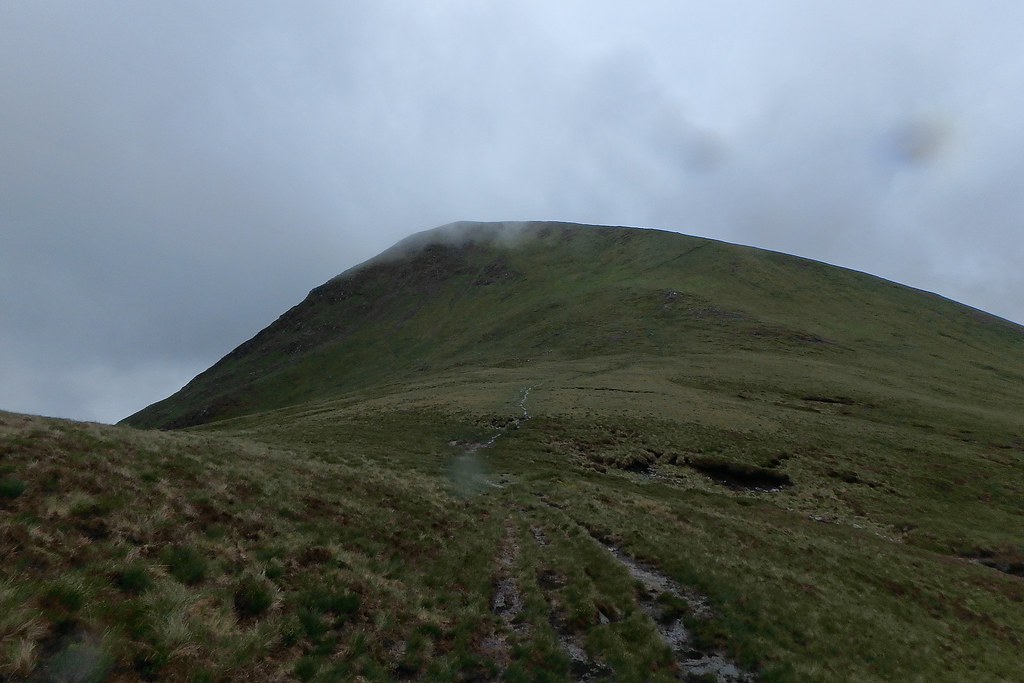 Looking at the emerging views from the bealach, West. 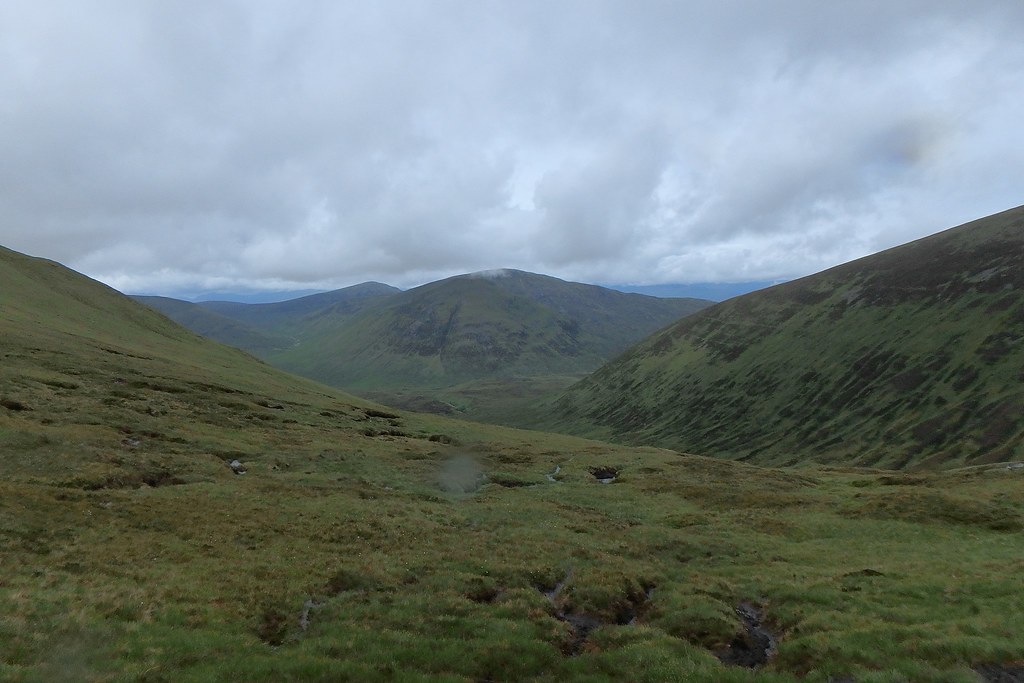 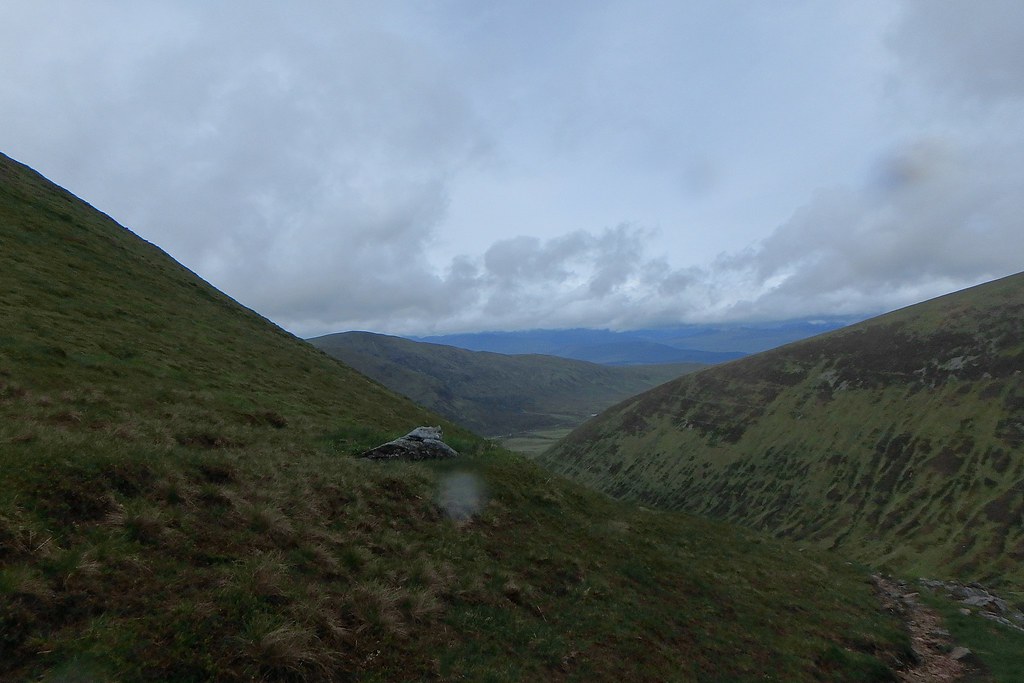 Back to Sron a' Choire Ghairbh. 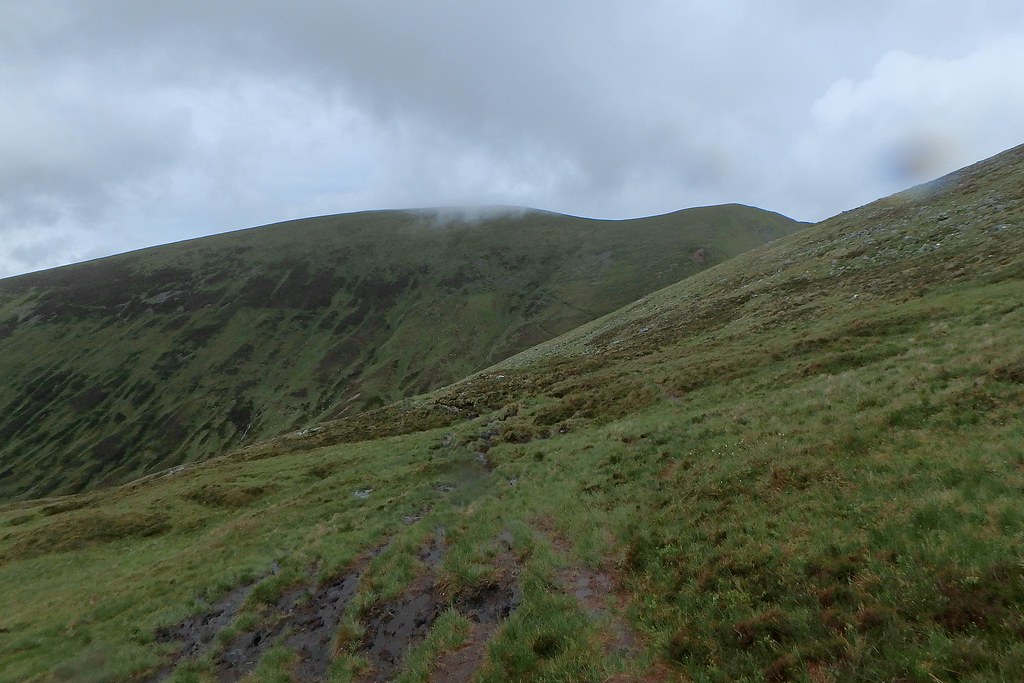 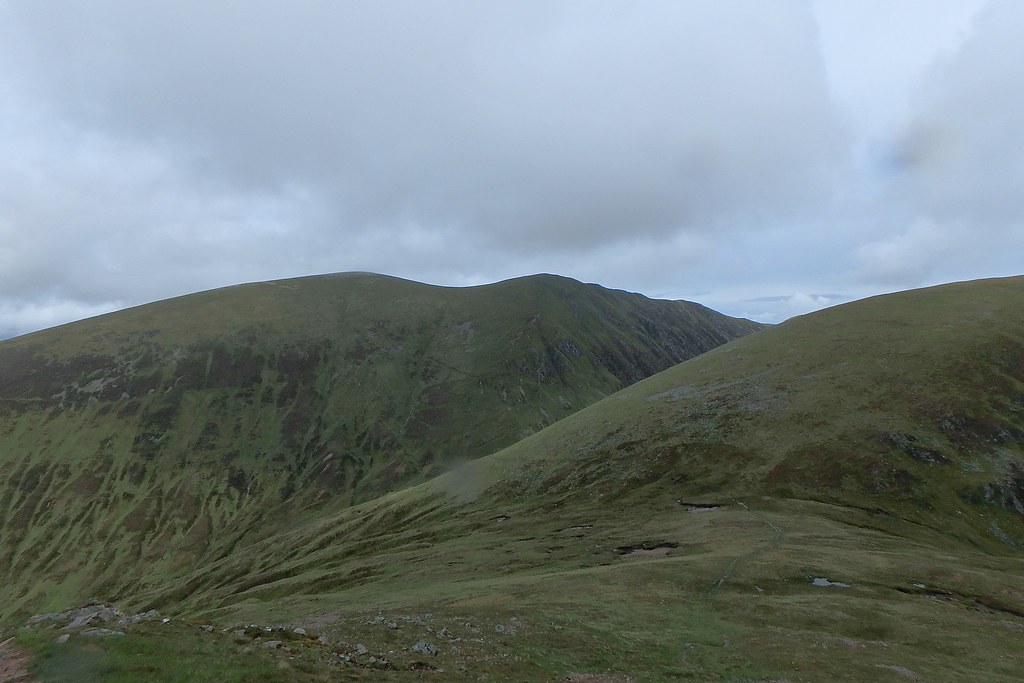 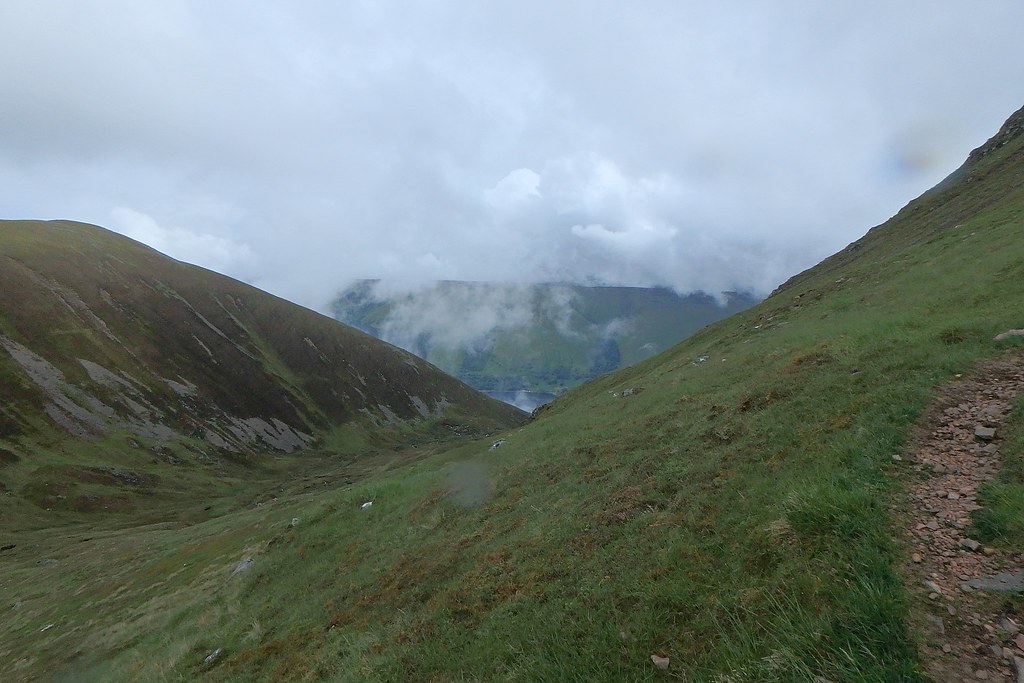 By now the summit was clearing, just in time for our arrival there. 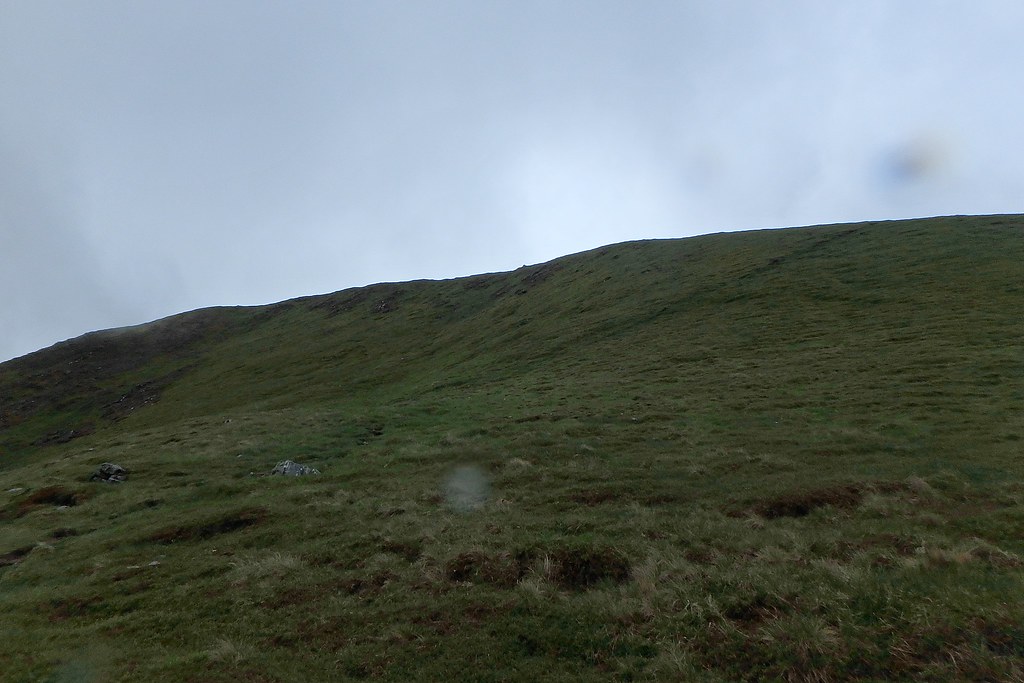 A bit higher up we got a better view of Loch Lochy. 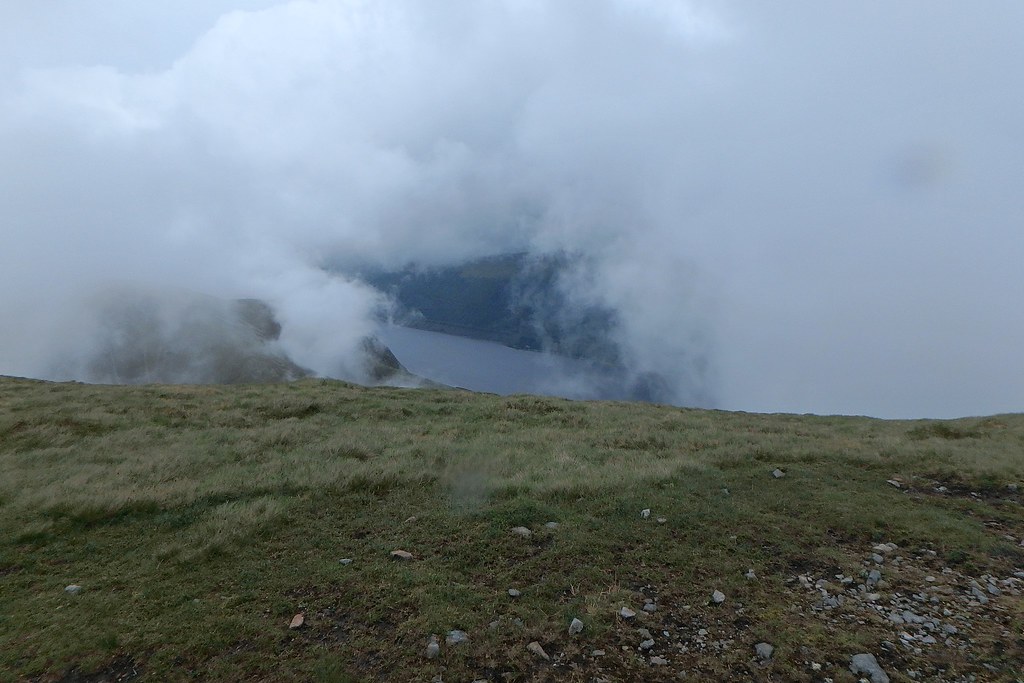 On the summit we got some views, it was windy but by now we'd dried out and were enjoying being there on our second munro.

On the summit of Meall na Teanga. 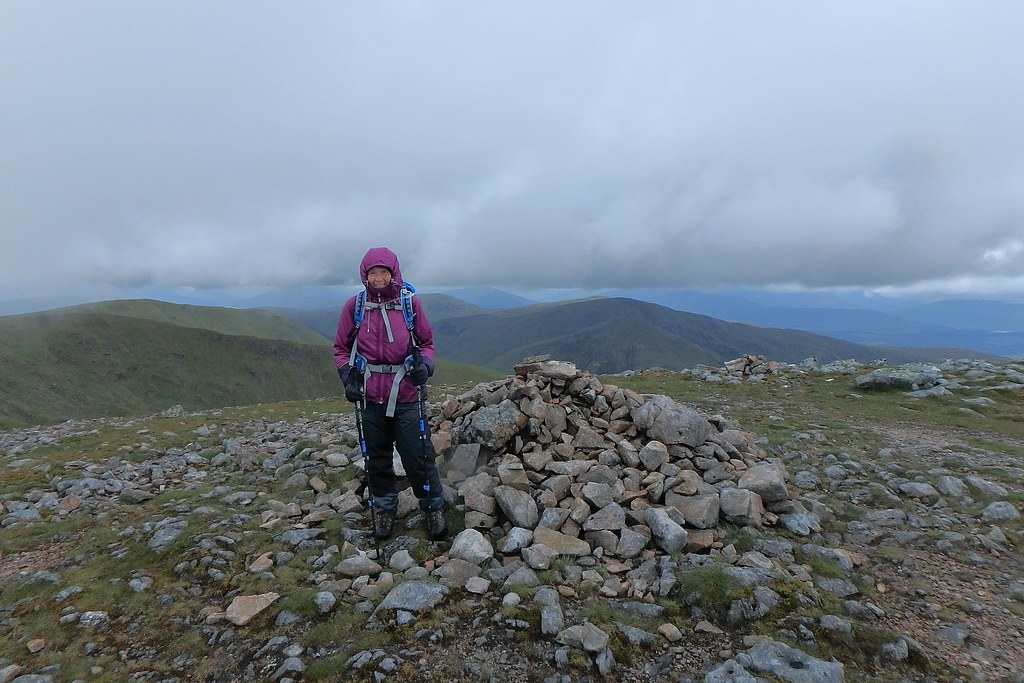 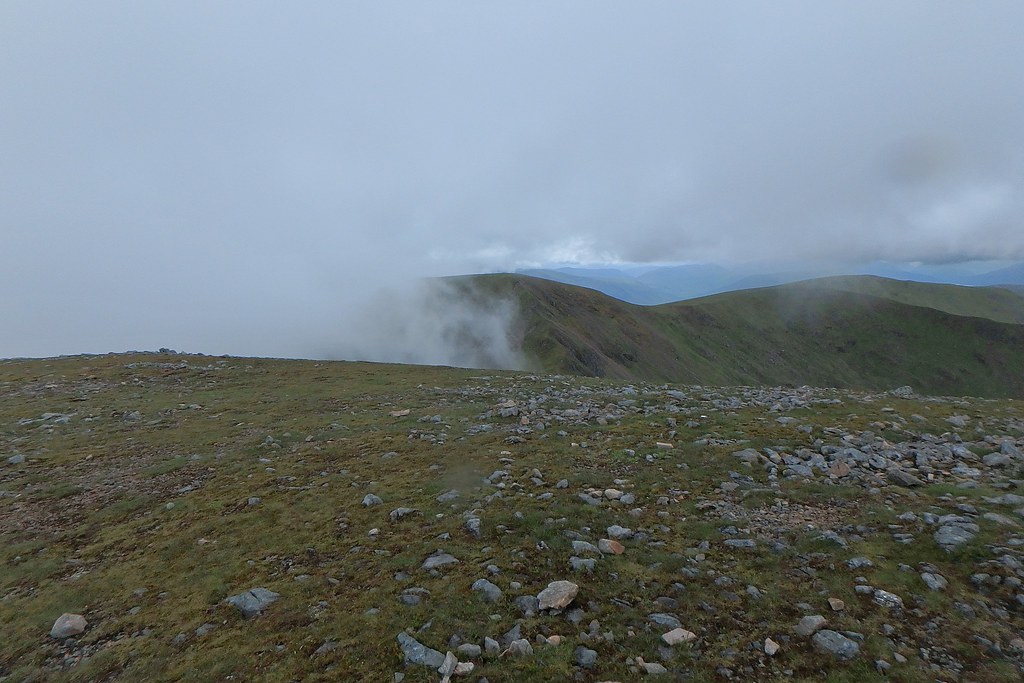 Down to Loch Lochy. 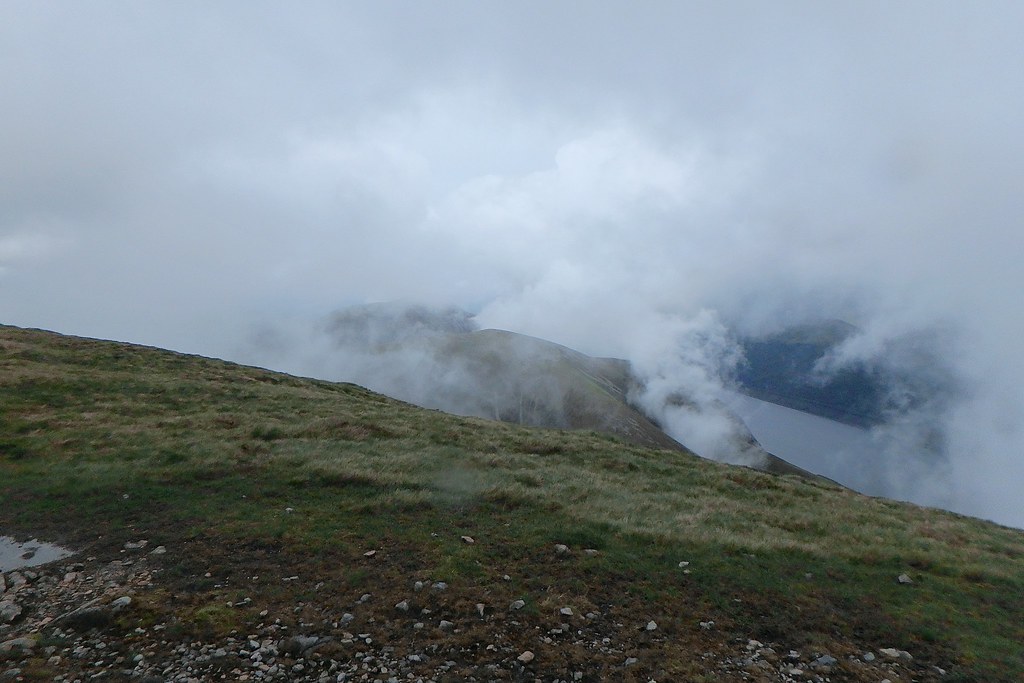 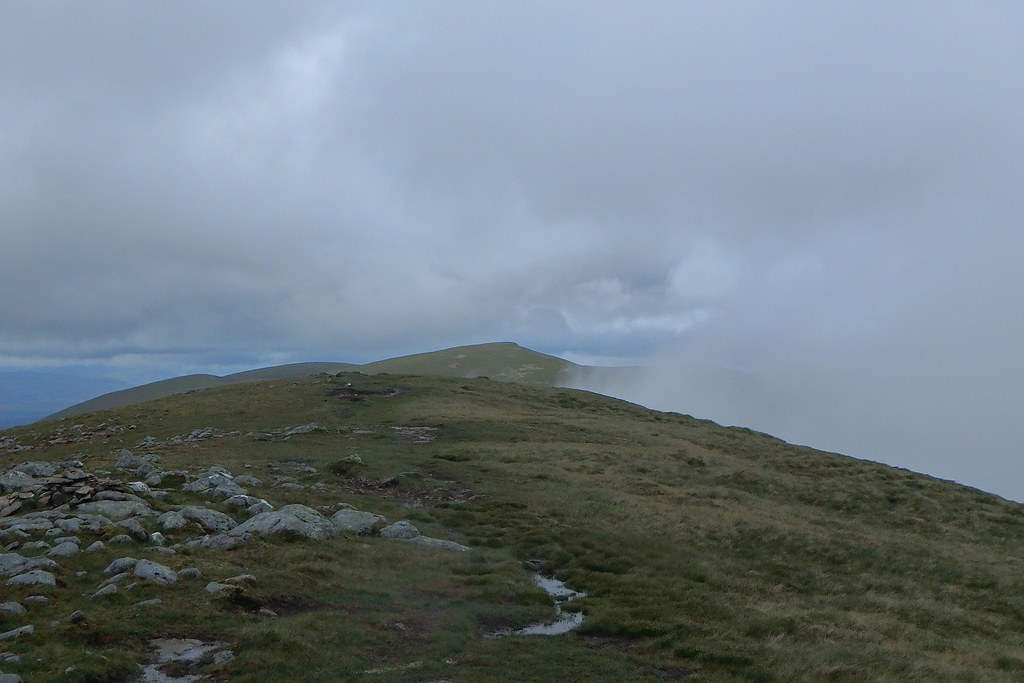 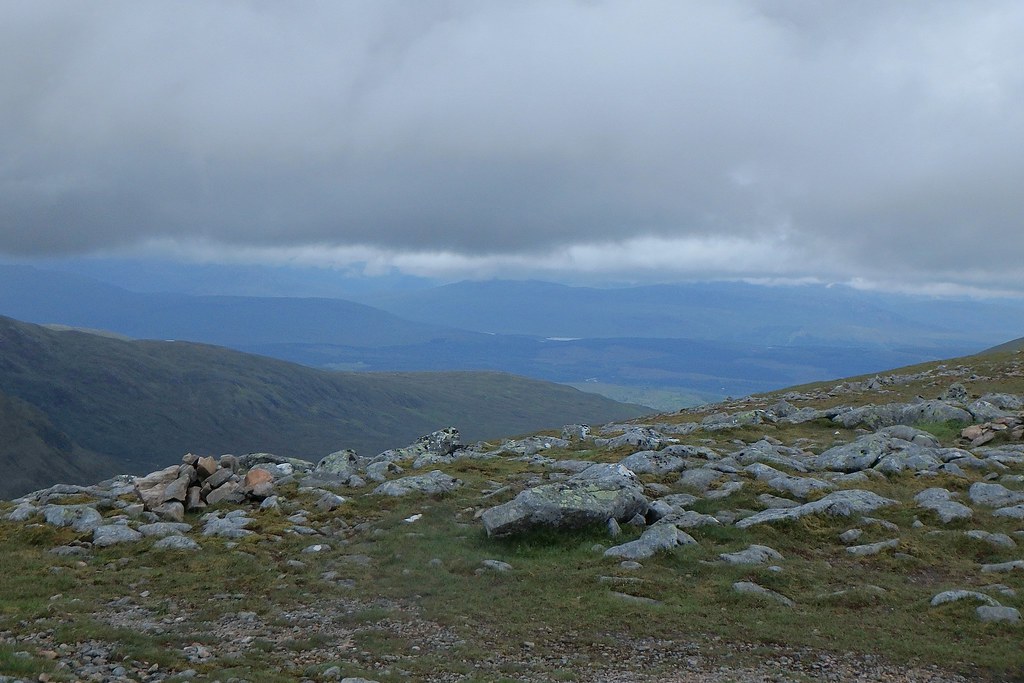 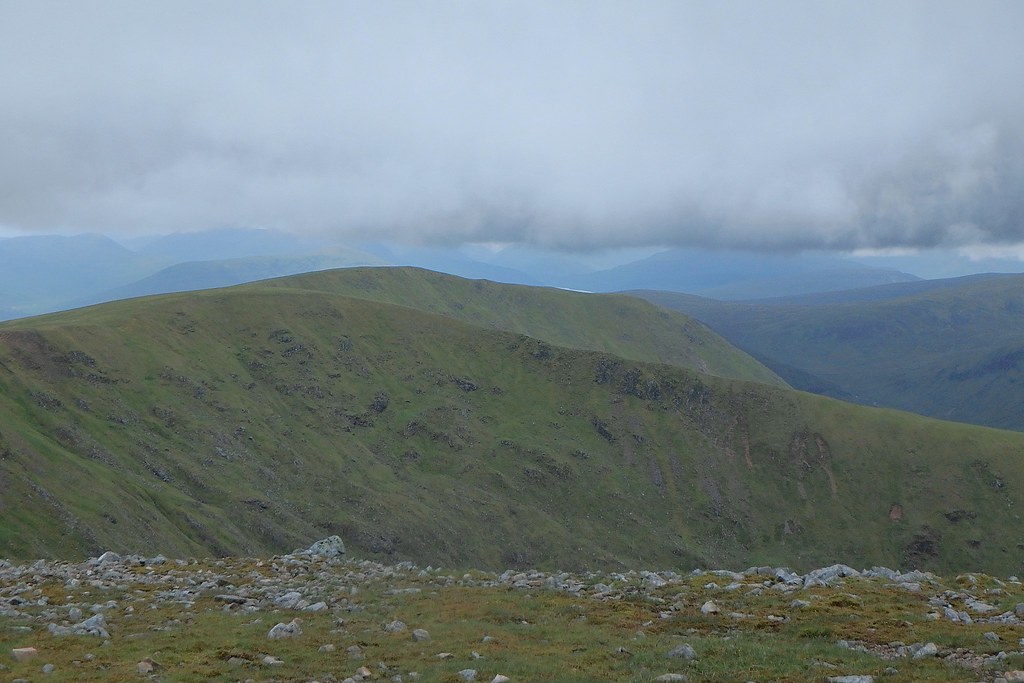 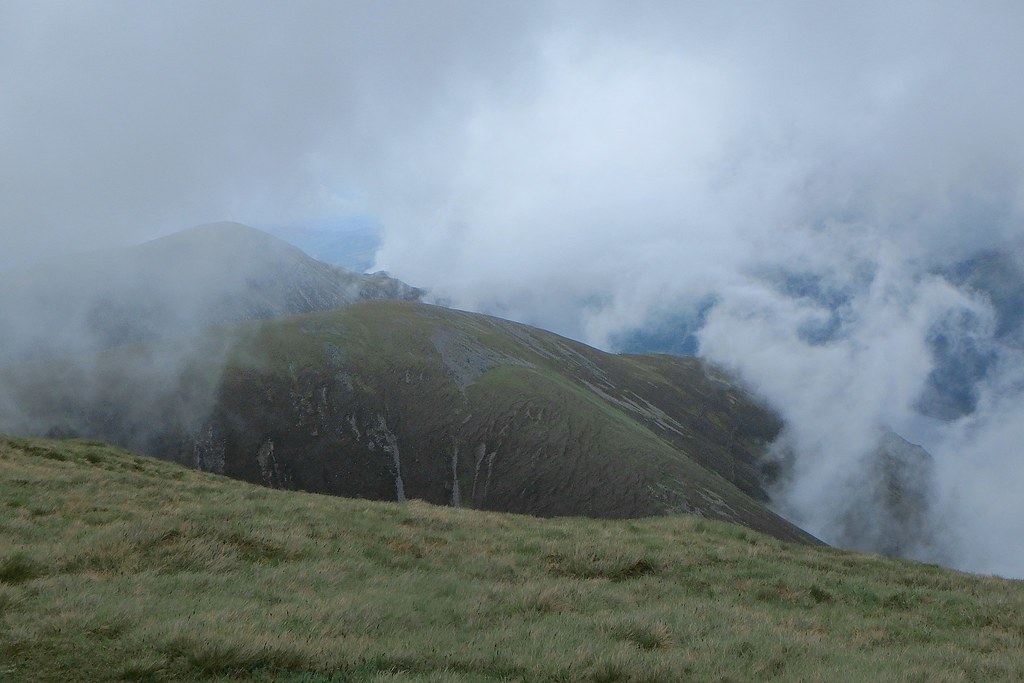 We stayed a while before setting off down, the wind was doing a fine job of drying us so, once comfortable again, we set off for the bealach.

In the bealach we fed ourselves then set off down. Clouds were descending again. 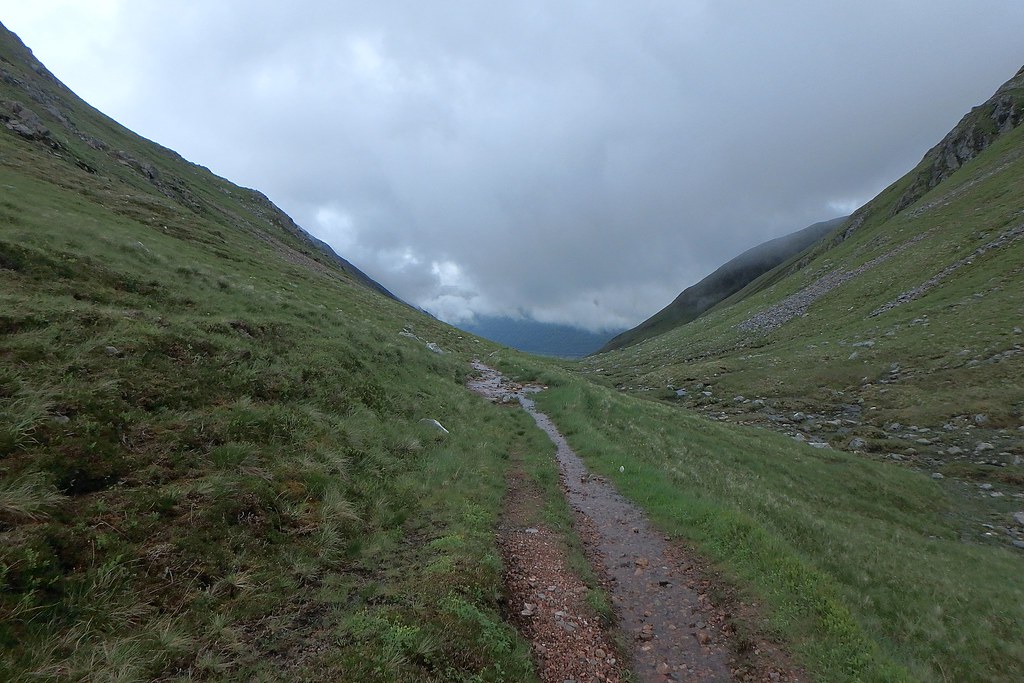 About 20 mins from the bealach the cloud came down again 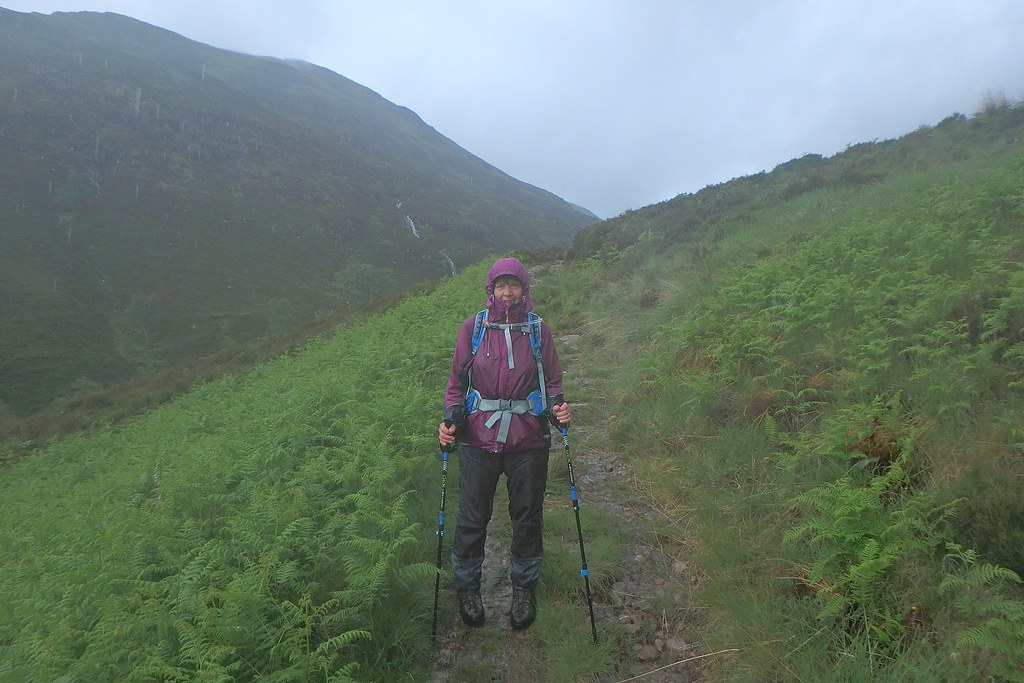 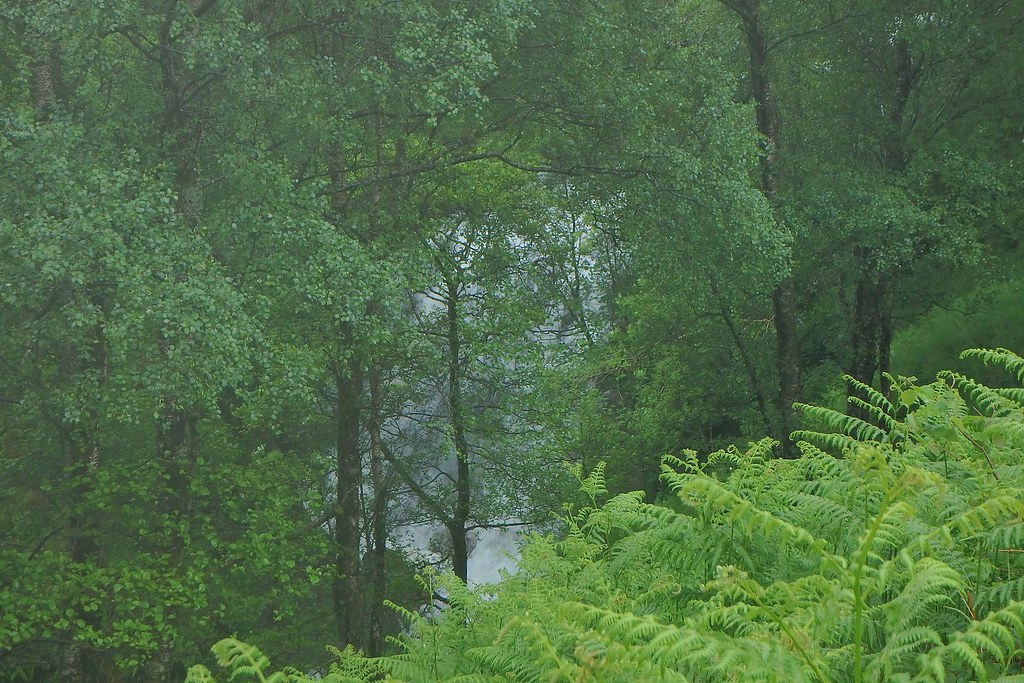 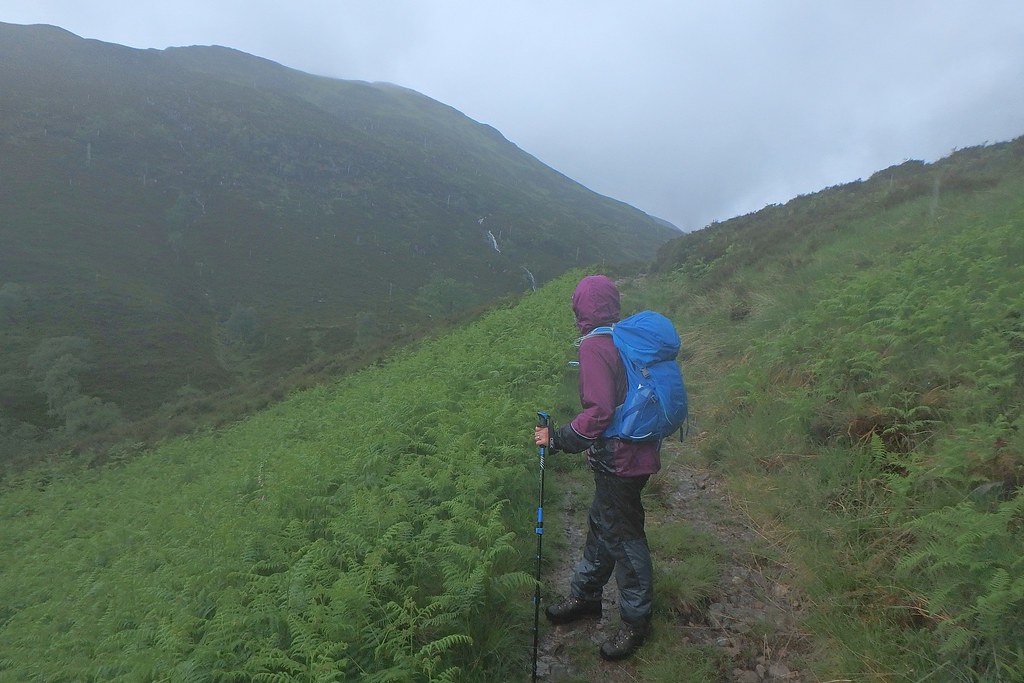 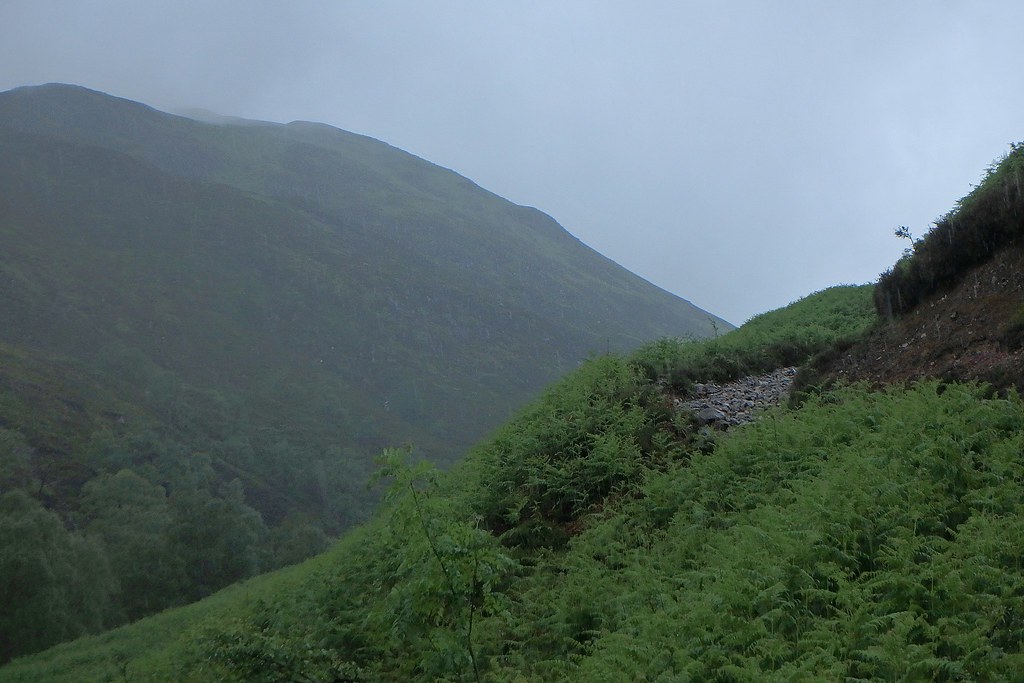 Back at the car we just threw everything in the boot, Denise had bought some dry stuff to change into, I forgot, all I had were my jeans, so I climbed into them and used my windproof as a shirt, well at least I was dry for the drive back to Cannich.

We had a good day, wet, but good fun, and it did improve for a time. We'd broken our munro duck for the holiday and I can see we could get used to this wet hill bagging malarky, I suppose it's a means to an end and it 'aint as bad as I thought, we might not be as choosy in the future