g32.gpx Open full screen  NB: Walkhighlands is not responsible for the accuracy of gpx files in users posts
This was the last day of my visit to Scotland so I was hoping for a good outing. I got it! Gary and I went for Beinn Achaladair, Gary recommended an ascent by the north east ridge. We set out from Achallader farm and walked along the track to the south of the Water of Tulla. Quite a few cars at the farm and poor parking even here, with some bods taking up the space of 2 cars. The weather forecast was accurate so far, clearing skies and strong wind. Best of all there was a load of fresh snow on the mountains; it had rained all night at lower levels, snow higher up and topping up the snowfall of the previous few days. Winter was back! It was cold as well, below freezing at low level for the first time I’d experienced in 3 weeks. Beinn an Dothaidh looked fine in its snow cover as we passed, we’d climbed a scrambling route on the buttress two weeks before and the snow had been thin then. Our ridge route became visible as we walked east; we turned north to cross the railway at a bridge. The bridge was gated and there was a closed sign up but it turned out to be absolutely fine, recently repaired it seemed in fact. Just after this there was a stile to cross followed by an increasingly steep slope. our ridge route up

The slope relented a bit as we got to the snowline; we climbed to the foot of our ridge start and fuelled up before putting on the crampons. What a fine spot! We could now see all of Achaladair’s ridge to the east and our ridge of ascent looked like great sport awaiting us in its winter cloak. the ridge at close quarters

The cloud was breaking up as well and the superb sight of snow-covered mountains as far as the eye could see was opening up behind us. We took our time and savoured every step up the marvellous ridge; it gave us a wide variety of terrain and challenge. Photo stops were frequent as the great views unfolded as we gained height. There were some climbing sections that involved swinging the pick into good, frozen turf. That satisfying thunk as it beds in firmly. A final section of climbing through hoarfrost-covered crag was followed by a short snow covered slope, this led to a proper mini snow covered peak to round off the ascent by this ridge. What a brilliant, compact ridge it is, full of character and one I must do again some time. higher on the ridge Gary on the rocks the grand snow cone summit to the ridge

Our route had brought us up near the cairn to the east; we walked south west the short distance to the true summit. It was blowing a fair bit and very cold. Now 1.30pm and I was keen to walk the ridge to Beinn a’Chreachain, it looked fairly close but I was deceived and I underestimated the distance despite having the map. I also hadn’t learned from my trouble with the feet a few days earlier, I was going to pay again for that. If you want to avoid any difficulties then you should descend south east from Achaladair before turning north east to Meall Buidhe. If you want some sport it is there also, we made the most of the conditions and found some wonderful snow slopes to climb down and crags to meander around. In places there were ice covered crags and icicles. Visibility was still improving still further, Ben Nevis and the arête was easily visible along with all of the Nevis hills. I thought of bio-man’s fall hereabouts and his recovery, not long to go until your trek in May Michael, wish I could join you.

We headed along the snow-covered ridge where there were large cornices; there were actually other folk about! A couple of chaps headed the other way moving fast, no crampons or axes in evidence as they headed to climb Achaladair. There was hard snow all about today after the frost of last night and the still sub zero temperature up here today, we wouldn’t have wanted to be without our gear. Hard to understand, and besides, using the gear is enjoyable anyway. 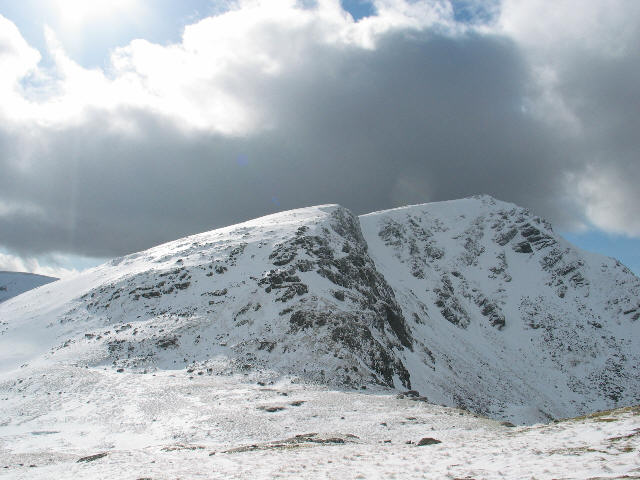 But now I started to get trouble from the right tendon again. A bit further on and the left tendon joined in and became worse than the right one. I should have set off down straight away of course but I’m too stubborn, I was so close to Beinn a’Chreachain. I also ignored the fact that I was still heading away from the car and there was a fair distance to cover. I pushed on anyway and really struggled on the steeper slope to the summit, both with the feet and being out of breath. I reached the cairn, took some photos then tried to do what I could for the feet. Not much helps, it is pressure from the boot that causes the pain and nothing actually seems to be torn or inflamed. I put some plasters on anyway to try cushioning. So I’d achieved the second Munro but now had 8km of walking ahead. Descent helps where the foot is pushed forward in the boot but I was slow, slow on this leg of the trip. Lochan a’Creachain looked very fine and the narrowish north east ridge was nice to be on. A turn to the north, then descent east led us to the lovely Crannach wood. The path through the wood is very boggy in places and soon will be impassable as the saplings take over. The wind had died away, hardly a breath to stir the trees here. Achaladair looked even better from this angle with the wood in the foreground. heading back, Achaladair from the wood

I was able to speed up on the flatter track beside the river and the pain eased a bit, another late day as the walk was completed in the sunset. There were still a few cars parked, makes a change for me not to be last off the mountain. An obligatory stop at the Bridge of Orchy hotel for a beer, the place was packed in marked contrast to our previous visits so no time for a meal with packing still to do before the journey south back to the flatlands tomorrow. I don't know when I'll be back to Scotland but I can't leave it too long.

Looks like you picked a good weather window for your holiday in Scotland.

I did get lucky with the weather, in the 3 weeks there were only 3 days where there was low clag all day.

Plus 1 day last week where I had to retreat, that was from Carn Gorm in Glen Lyon where I'd started out in high wind then blizzards came in when I was 200m from the top, that weather lasted most of the day. I didn't fancy 10km of plateau walking in blizzard and whiteout! I still got a bit of a walking in though!