Getting on for three years after climbing the last of the Hewitts further south, finally a long-delayed look at the North Pennines and a tentative start to the 32 ‘others’ to the north, beginning from their highest point.

cross fell.gpx Open full screen  NB: Walkhighlands is not responsible for the accuracy of gpx files in users posts
Just across from the Lakes, this is far less obviously walking country – there’s a fair bit of roadside parking in the little farm-village of Kirkland at the foot of the hills, but there aren’t many of the usual tourist accompaniments, or many people other than the locals. The bridleway up starts off really well, a firm grassy track winding up between the evocatively-named spurs of the main hill (Man at Edge, Lad Slack, Cocklock Scar, Hart Sail, Wildboar Nook, Poor Man’s Brow, Willie Hill, etc – there’s either a lot of local imagination here or a playful mapmaker!). Easy walking with a great long view across the green Eden Valley to a Lakes skyline… Up to there, the North Pennines had been entirely delightful, but once clear of the mine workings and onto the flatter upper slopes it’s much closer to expectation – the path disappears into some very marshy ground and it’s easy to drift off line into a bigger morass in the fruitless search for better ground. Keeping south of where you instinctively want to go seemed to be the best bet, but even the Pennine Way, once reached, doesn’t seem too clear or easy here and it’s rough everywhere until the relief of the firm and stony Cross Fell summit plateau. And one of the most impressive summit shelters anywhere. North to Melmerby Fell etc after joining the Pennine Way The way over the neighbouring Dun Fells is much clearer and easier going – the golf-ball on Great Dun Fell is visible from much of Lakeland, let alone a mile away, and much of the path has been flagged over the muddier parts (it looks like fairly recent work but a good number of the stones are dipping partly or wholly under the waterline already, making you wonder quite what keeps them up in the first place…). The heavily-built summit area won’t be for everyone, but if you look outwards to the hills rather than inwards to the radar station from a circuit of the perimeter fence, it’s quite a nice spot really. It’s all pretty level and the highest ground might just be somewhere inside (although those bits might be manmade) but I didn’t really have the taste for the little trespass to find out (the front gate was open though and it looked perfectly easy to try for those who’d wish to). The Little Dun is a decent pointier peak though, no hardship traversing it again on the way back. The right-of-way back definitely isn’t immediately obvious, a fair bit of re-ascent of Cross Fell and then there’s a just-visible channelled path coming in from the east; the other side of it and the way down lost in the wet headwaters of Crowdundle Beck. After quite a lot of skipping muddier parts it firms up into a good enough grassy way down and finally into a very pretty gorse avenue into the farmland below and back towards Kirkland. 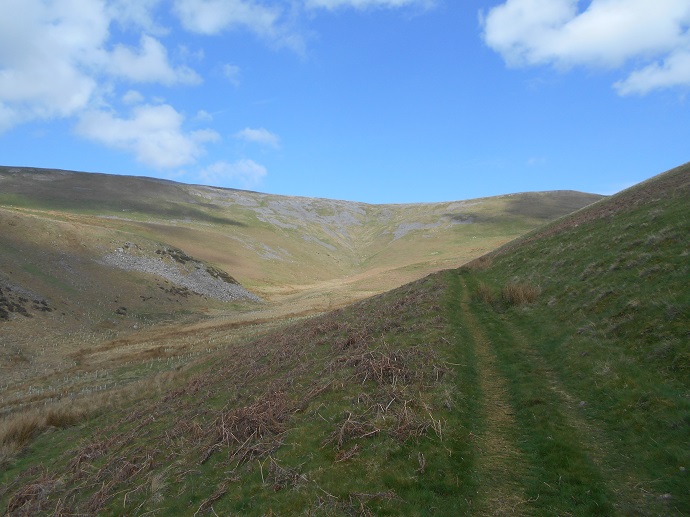 Start of the route back to Kirkland Quite testing but a manageable route and a decent day out, if not one to instil a fervent desire to rush back and ‘bag’ the rest of the northern hills in place of more welcoming areas (three months later and I’m no further on, but doubtless one day the need to top off that ‘Hewitt’ figure is bound to have got me back there enough times…).

A timely report for me - I've just been looking at options for routes in this area, and found myself wholly spoilt for choice! No sooner has one provisionally sorted out one route, than another becomes apparent...

Must admit to being a bit horrified by the golf ball. Mind you, the last time I was in these hills they were clag bound, so I didn't see it, so these pics were a tad unexpected.

Boy, you had great weather for it!

Wondered when you would get round to these ones!

I walk Cross Fell a lot but must agree that the stretch before the PW (and as you rightly say the PW itself at that point) is a bit wet. Either way this Kirkland approach is still more scenic than the Garrigill approach imo.

It's a great place to be though and because of it's position (more so than Scafell Pike) it feels like the roof of England.

Nice hills these, Poppies, a change from the Lakes, though not so far away. The Kirkland route is a good way up Cross Fell.

and what a good weather day you had

something that we've been short of this year

I live right below Cross Fell and have been up it many times in all weathers and although I have started from Kirkland on occasions my preference of start is at Blencarn and so walk down the marshy stretch of the PW from the top of Cross Fell, in effect your route in reverse

Thanks for a great report and posting

Thanks all. Definitely quite nice up there on a day like that, not sure how much I'd have enjoyed it after a week of rain or with the clag down and still a bit wary of trying anywhere up there that hasn't got a stone footpath across it... That's interesting about the shelter, Trailmasher: if it's already a few years' old, it's a really fine bit of work - not a stone out of place,