I'd come up from Sussex (again) and camped at Ardmair, so I could make a good early start with a weather forecast that suggested stormy weather in the afternoon. That meant I was at the Inchnadamph carpark at about 5.30, so I boiled up some water, made coffee and munched some breakfast. Quinag started to appear. 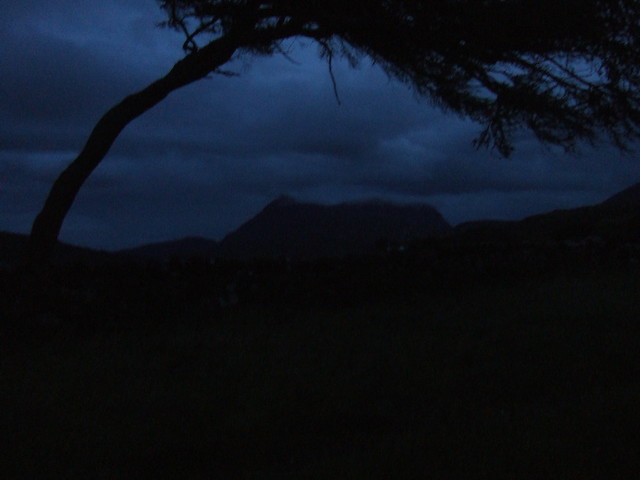 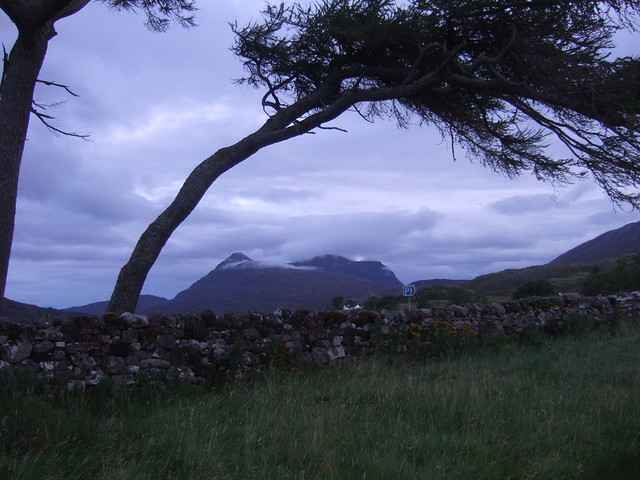 So did the midges

Packing up my stove and stashing my flask in my pack, I put the midge-jacket on (THANK YOU whoever it was on here who recommended this wee marvel

!) and headed off on the long walk up the glen. Robin and frog popped up on the path - all very delightful... 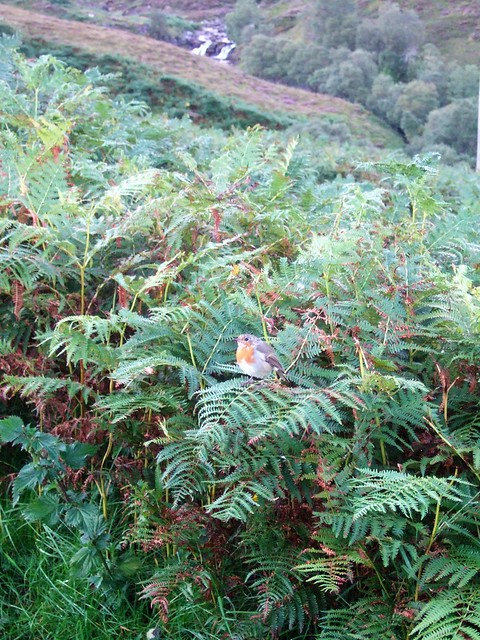 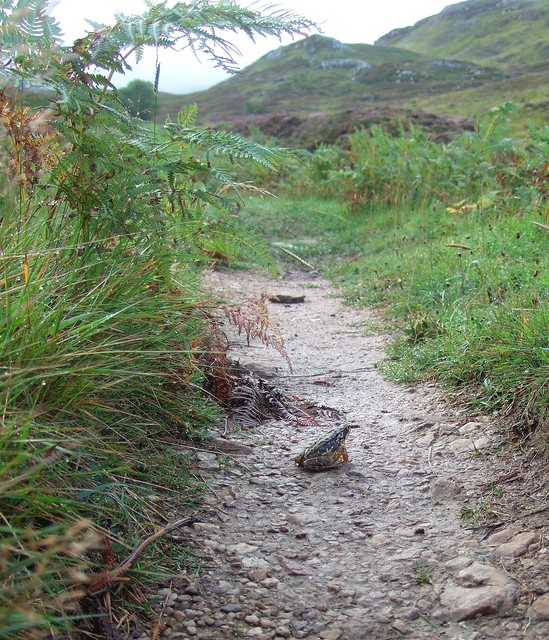 - and the glen I was heading into was being caressed by beautiful rolling clouds. 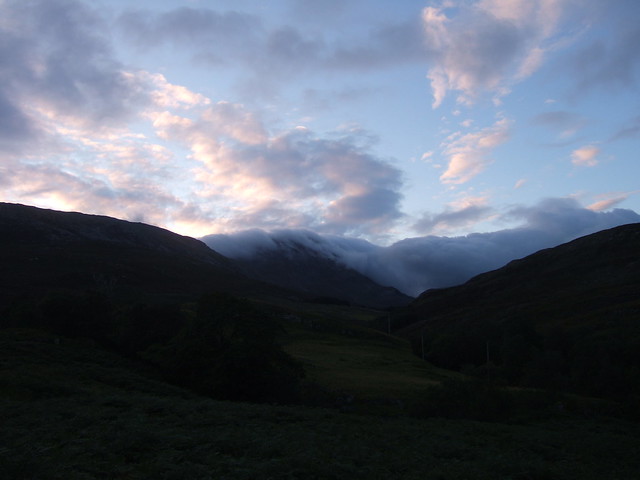 On the way, there's a concrete bridge, and that was under just a really low-level slight film of flowing water so the going couldn't have been easier.

By the Lodge, a notice did say there was deer-stalking today, so no going off-piste. Not that I had much of a mind to. I knew I was probably going to be pretty slow without complicating things. When you live in the South Downs, you only get your Munro legs together a day or two in, but this looked like the best day weather-wise, so any real heights had to be today I reckoned. Also, I wanted to stop to savour, scan for dippers or wagtails, pick a few blaeberries, that kind of thing - and if I had to wait for views at the top, then allow for that too!

The morning light kept on being fab, and the clouds just kept dancing about as the path rose. 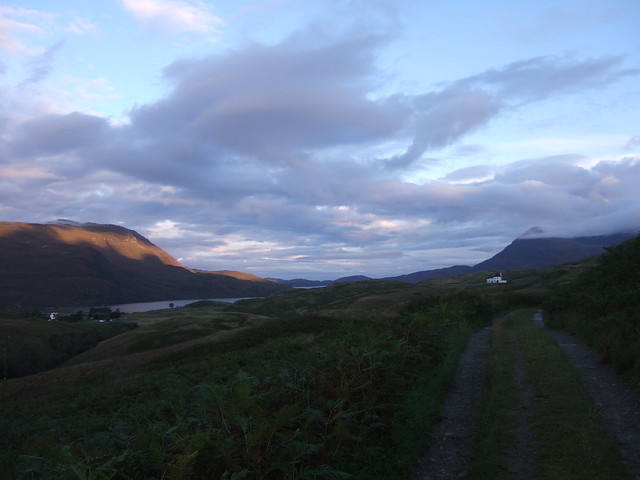 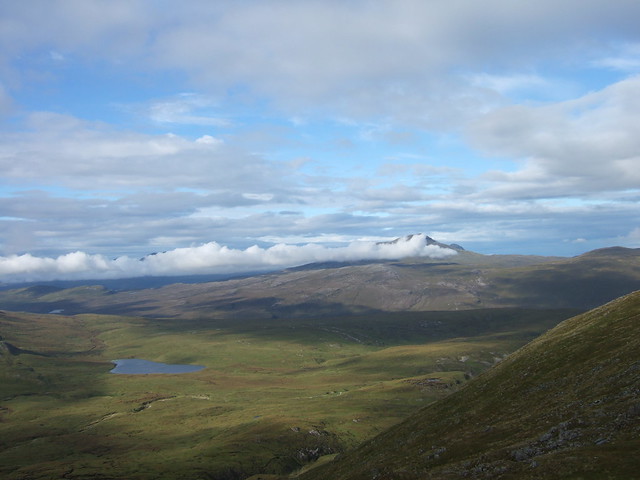 I found a lovely rowan tree to shelter under for a coffee by the burn, then pressed on up to the waterfall and the fun scramble up to Conival's curving shoulder. 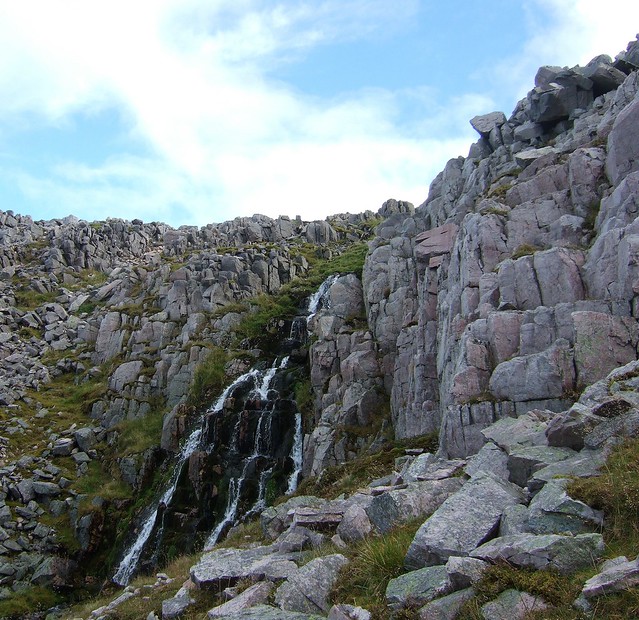 It was around there that the day's first deer (apart from all the ones lining the A835 from Ardmair!), came into view. 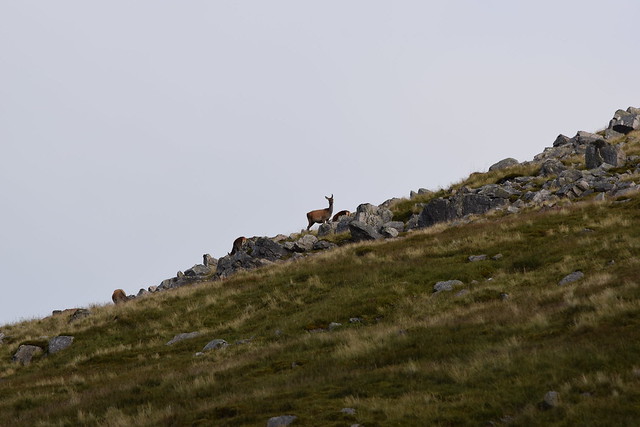 Up above the waterfall buttress, the glen's boggy ground was replaced by stones and sand, really welcome after the long slippy, slidey slog in. Just before Conival's summit, there's a little outcrop which beckoned "take a break"; so I did, and on seeing a) deer on the path up ahead and b) someone coming up the path behind me - obviously not a South Downs dweller - I stayed for quite a while so I wouldn't frighten the deer away and he could have a good butcher's too (so to speak). 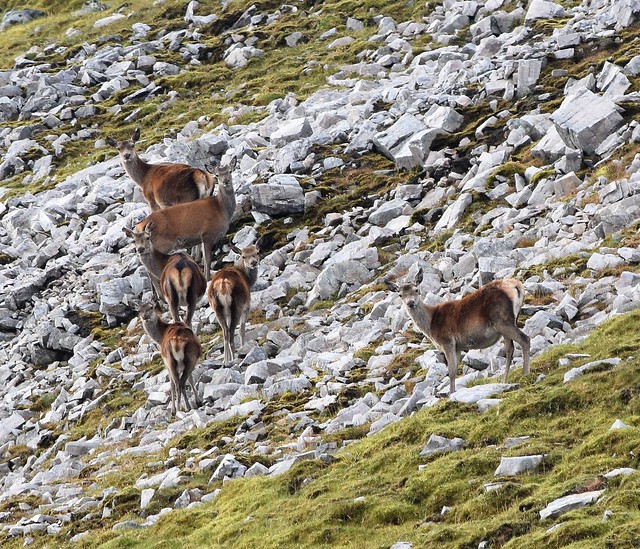 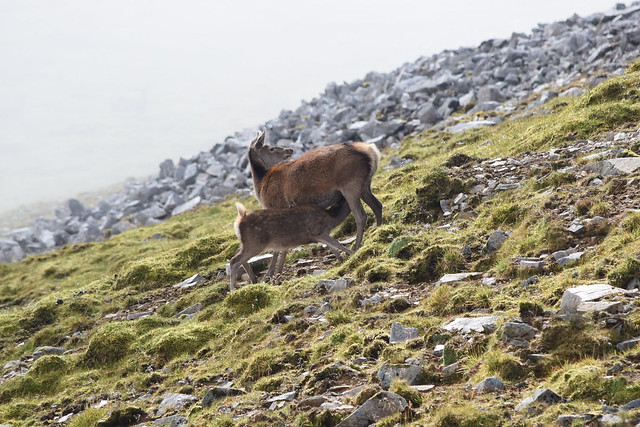 Conival's summit was a mere hop, skip and a jump away, so once the deer were aware we were on our way, the chap - a guy from Yorkshire called Andy - and I headed off to it together, and found it shrouded in cloud. 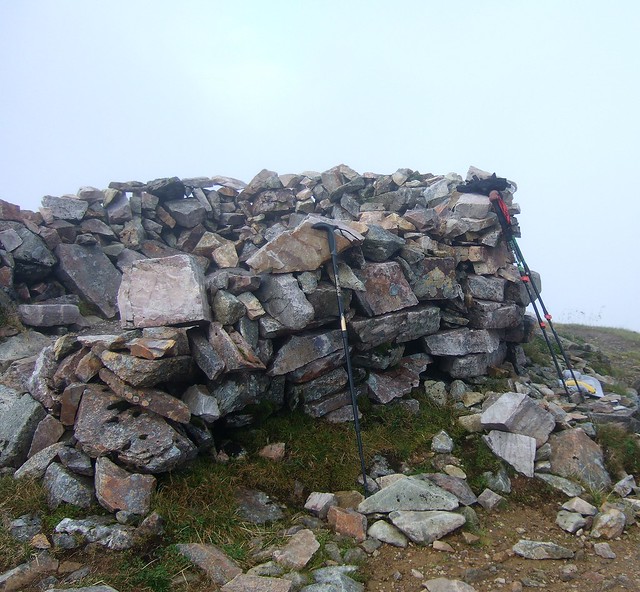 "I've got loads of these shots," he said. "Pictures of summit cairns and trig points, with nothing but cloud behind." We swapped stories of long walks in for cloudy, totally viewless summits (Suilven, especially memorably for me, a compensatory cloud-bow on Ben Arthur for him), and tumbled our way down and back up towards Ben More Assynt.

On its first peak, I saw ptarmigan. They were hanging out on some rocks, so I stopped to photograph them while Andy, mountain-goat-like, sprang on uphill. 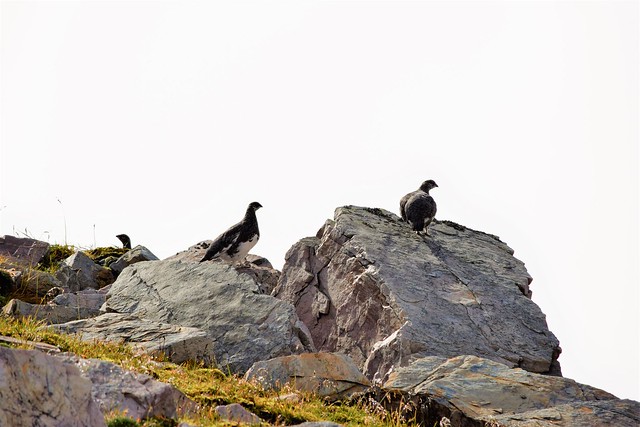 I love ptarmigan, partly because the first one I ever saw really close-up was on an amazingly memorable 21st birthday walk and overnighter in a bothy which had lost its roof. April 1992. Snow and ice.

Ptarmigan in full feather-bootied winter plumage, looking down at us from a tree-branch by Loch Doon. I also love them because if they do get nervous that you're looking at them, they duck. As though that's going to help.

And that superb clock-winding-up call. Plus they're just such flipping tough little birds

Ben More Assynt's summit was also in cloud to begin with. Watching the cloud-play was delightful though - dramatic and majestic. 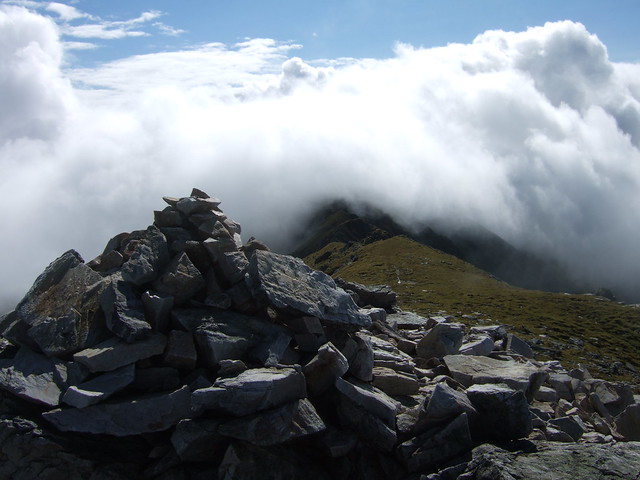 Eventually it lifted, though not to the south. 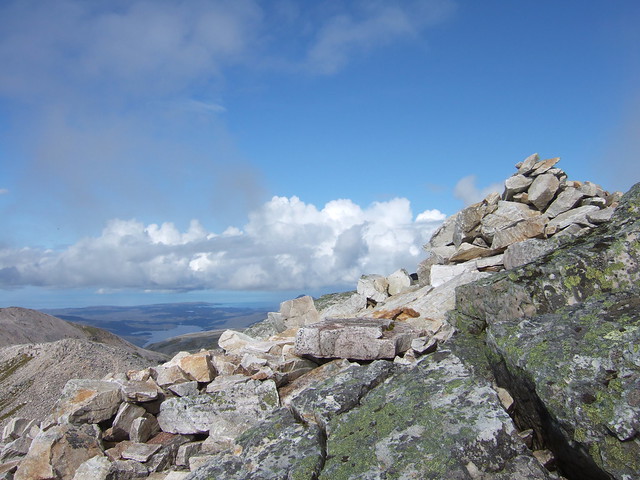 Quinag's own clouds had also lifted in the distance: 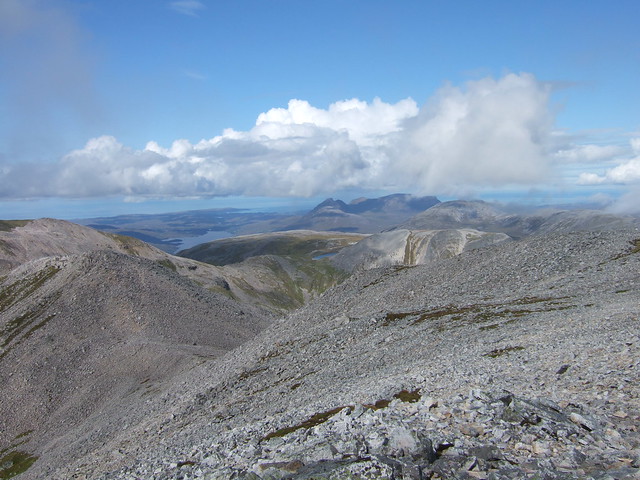 and the little we could see WSW, beneath the cloud, afforded a good Esheresque puzzle... 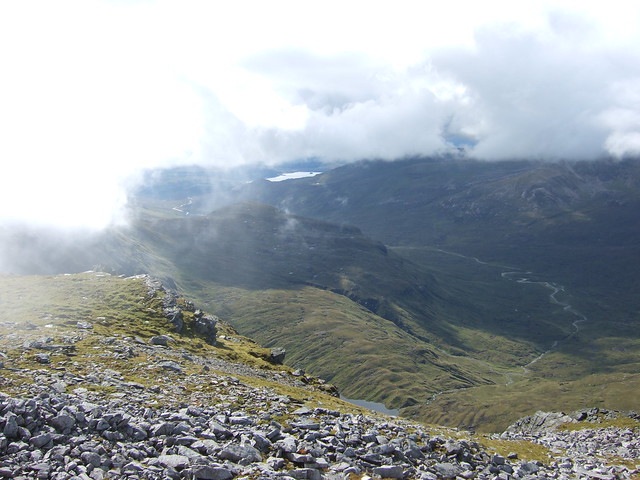 Clambering to the other side of the cairn, in the vain hope the cloud in the S valley would lift, I was really enjoying - and being drawn by - the ridge beyond - it looked superb in this light 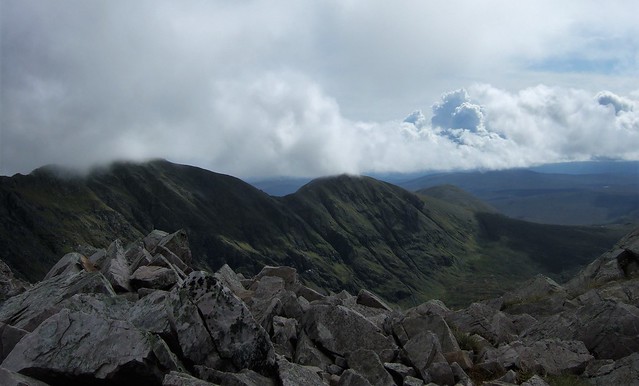 while back towards Conival and Inchnadamph, it looks more like a quarry up here! 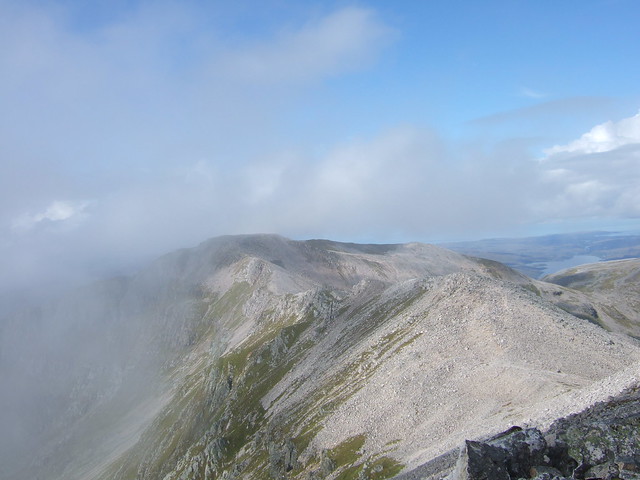 After a long chat, Andy needed to get going. I didn't yet, so he bounded off while I had a bite of lunch and enjoyed the summit some more. It was lovely and warm, breezy enough for a midge-free relax, in vest-top and no midge-jacket, and luxury to have the summit oasis to myself for a bit longer, just hearing the ravens croaking as they bustled past. 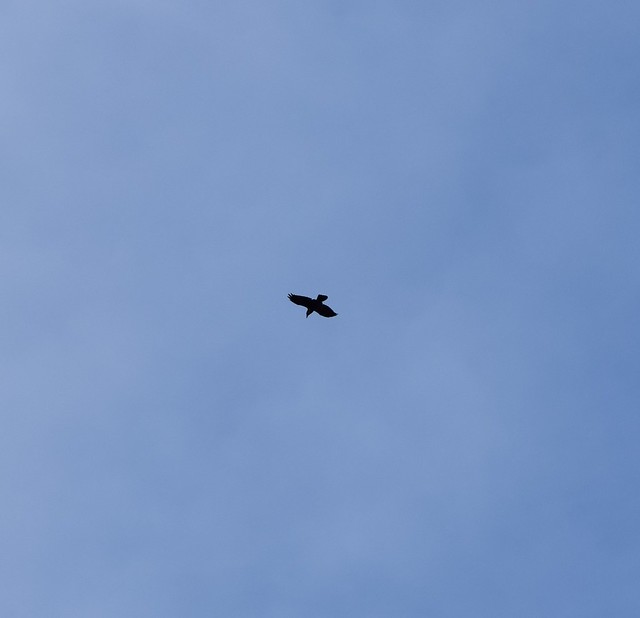 At about noon, an eye on the time and *that* forecast of thunder, I decided it was probably time to saunter back.

There was a view from Conival this time, albeit still peeping under the blanket of cloud. There was also a chap from Edinburgh who had been "perishing in the sun", he said, on his way up. He'd stopped at Conival's summit for lunch, and as he tried to enjoy it, the midges came in for their lunch too, I spread the word about midge jackets 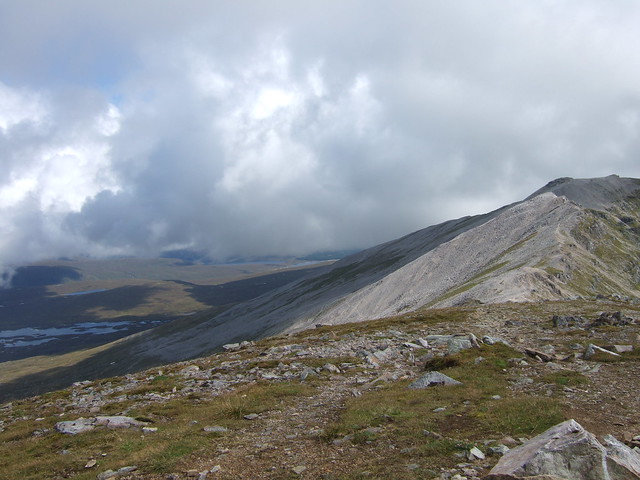 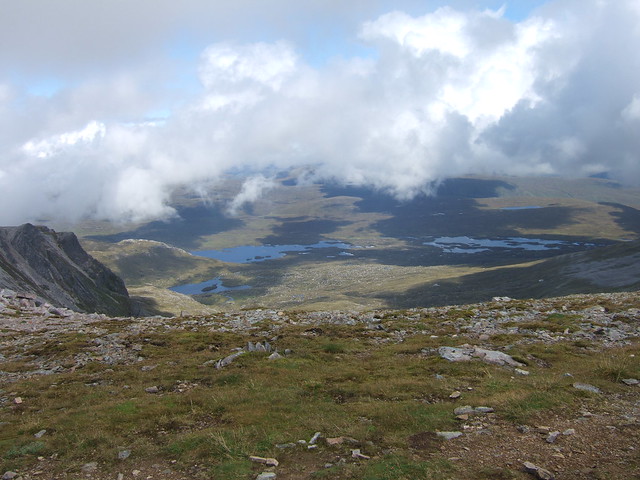 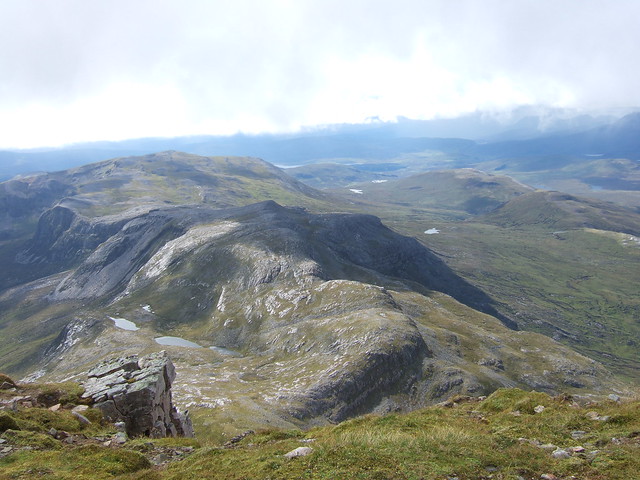 This guy was also really enjoying the deer, and sure enough, they were still very present on my walk back. Close enough to really enjoy their different faces too. I wouldn't mess with the one on the right: 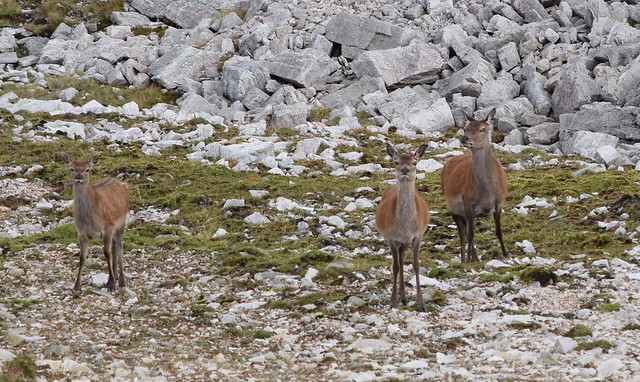 But those storm clouds were coming my way, and I wanted to be down off the ridge. 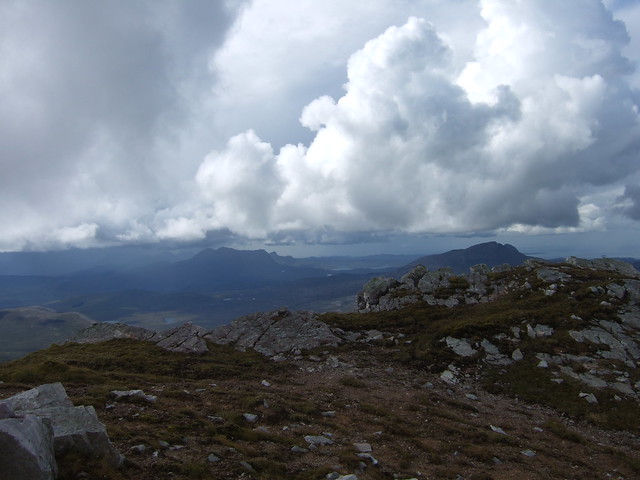 I'd just got down from the scrambly bit when the heavens opened, first with a rumble and then with an admonishing clap of thunder. So no more photos. The steep, boggy rocky descent was getting muddier and muddier, so it was all about concentrating on footing and trying not to do too many lethal heel-slides. I did take a tumble with one step, which spun me and threw me head-first on my back down the bank. Somehow, instinctively, I spun round on to my front, head uphill and feet up as though I was wearing crampons before I knew it. So that was pleasing (ahem)!

Nothing like a bit of self-arrest practice in summer

He'd been to Handa Island in the morning and was determined to bag these two on his return, so with a "I think you got the best of the weather" to me, (er, yep), up he went. (I met him the next evening at Inchnadamph Lodge, alive. He'd passed the Edinburgh guy coming down too, but he himself had been up on the ridge on his tod in the thunder. And possibly hail...)

I stayed on my clumsy feet for the rest of the way down, which doesn't half go on and on, and it was great to get to the sheepfold and little plantation next to the turning to the caves. Down at the concrete bridge, what an impressive change! The burn was now in spate and the bridge uncrossable. To the left is a wooden (well part-wooden, part pebbledash-ish) bridge - so I went over that, with the water brown and churning down below, and carried on back past the lodge to my starting point. Frogs were jumping out all over the place, and there were at least two squashed on the path and track - by feet? by vehicles? by my co-walkers??

Hope not, but they can be almost impossible to see unless they move. Anyway, yes, drama, carnage and tragedy compared to the Arcadian stroll in!

What with my stopping to chat and flailing about in the mud, it was coming on for 5pm when I got back to the car (and the clouds of midges waiting there). Back at Ardmair, with gaiters etc hanging out to dry, it was a cuppa, a rainbow and a load of cracking memories from a brilliant day. 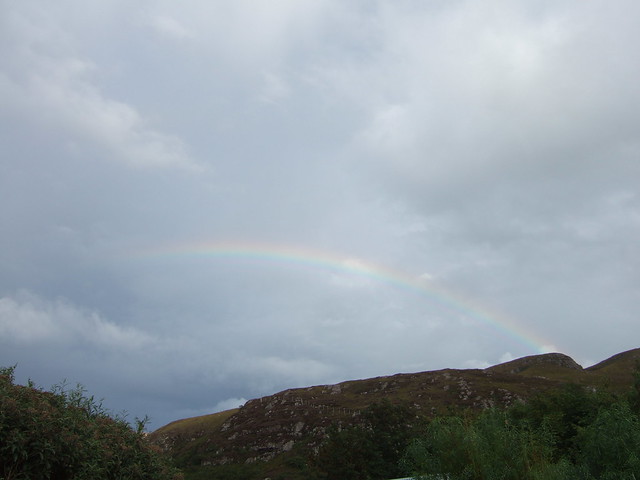 Re: Deer, ptarmigan and... thunder!


There two were one of the wettest days I've had on the hills, I should return on a nicer day, as they look fabulous.