Goatfell was, in a way, only incidental to this trip - with the Waverley's autumn sailings cancelled because of the weather conditions, I set off for Arran mainly because it was the longest ferry trip I could easily access.

It meant an earlier start than for the Waverley, though, and I ended up with a mad dash from Queen Street to Central. I very rarely go anywhere on a train from Glasgow Central - if I'm changing in Glasgow it's to the West Highland line - so that makes a trip feel a little bit exotic straight away! It's not the most scenic route, though, with the sea only appearing at the last minute.

The weather forecast was for white clouds and patches of sun, but at Ardrossan it was very grey - the clouds weren't sitting right on the hills, though, which was the most important thing. Approaching Brodick the weather was looking a bit clearer, and the hill was standing out quite dramatically. Goatfell from the sea

I decided to do my pottering around the village first, and my climbing after, because I wasn't going to rush for the afternoon ferry and there was no point coming back down when everything was shut - but really all I did was eat a bacon roll from the bakers and go to the co-op. So I wandered out towards Cladach, taking the road as far as the museum and then the short cut over the river. I could have done more pottering there, especially in the brewery shop, but shopping is no use at the start of a hill!

The start of the path is a bit hidden in a corner, and then climbs up past a farm to a forest road, which becomes a smaller track, and then when the tracks run out a path runs on through smaller trees, then up a little valley with bracken and scattered trees, and a burn running down below on the left. The route was reminding me quite a lot of Dun Caan on Raasay, on a slightly larger scale - the road then track then path through trees, and the first glimpses of impregnable summit. There was a good view back now to Brodick across its bay, as far as any of the views were good. View back to Brodick

Above the last of the trees there was a wooden bridge and a fence, and the moorland flattened out a bit. The summit was still looking fairly impossible, but they often do and never are - either the path would just appear, or it would go on being like Dun Caan and there would be a way up round the back. There was also a cloudy view of jagged ridges over to the left, although it didn't look like I was going to get the dramatic views I'd hoped for. The way to the summit was clearer as well - keep going forward parallel to the main summit ridge, and when you come up onto another little ridge, turn left. 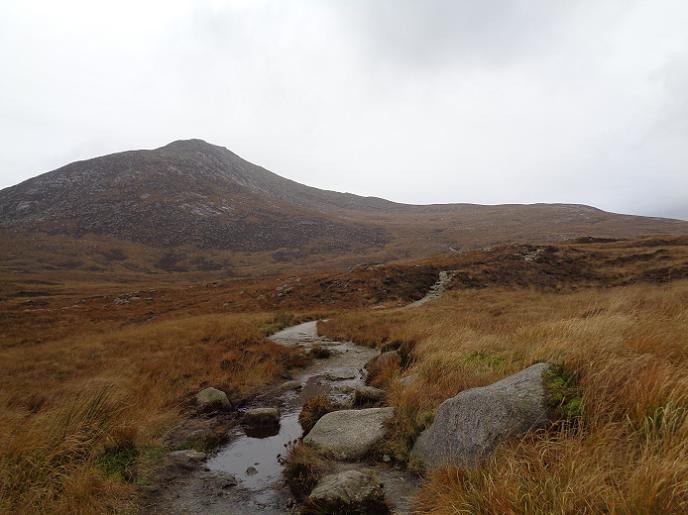 It was a long way round, though - the ridge was much longer than it looked even from where the path became visible. From the side the ridge looked quite dramatically twisted, with the lines in the rock pointing in every direction. 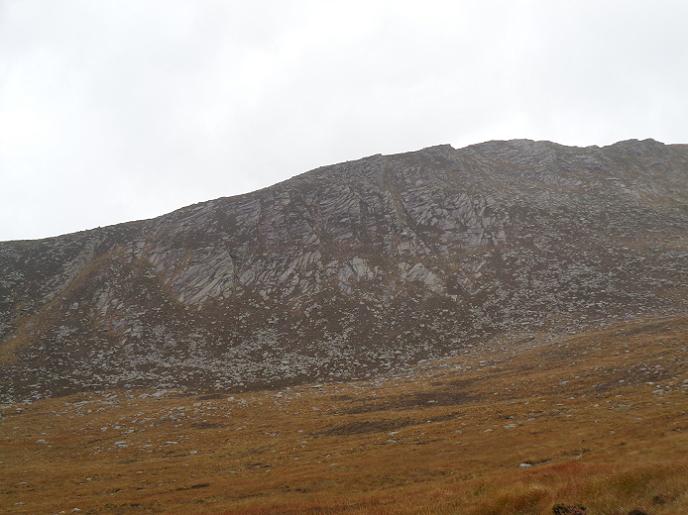 More wandering on towards the ridge, with the only added entertainment being that I now started to meet people coming down - presumably the first of the people who had headed straight from the ferry to the hill.

I did have a map with me, honest, but there seemed no point getting it out in the damp when the route was just a case of following everyone else - it was never really raining, but it wasn't exactly dry either.

I started to feel like I would never reach the ridge, but it did appear eventually, and the path coming up from Corrie joined on. I was baffled by an anvil lying in the path - spades and buckets further on turned out to belong to path menders, although I have no idea who was responsible for the abandoned fish slice at the summit! Anvil in the path

The last part was the steepest, and the roughest - a line of steps for a bit, and then winding in and out of rocks as it got steeper again - still mostly stepped, and nice and solid, although it wasn't obvious where steps had been built and where they were just part of the piled rocks. On the last ridge

The summit was quite broad, with great big rocks, and just at first there was more view than there had been for a while - along the ridge to the north summit, and down into Glen Rosa. It didn't last long, though, and as I sat on a rock eating my lunch there was soon no view at all 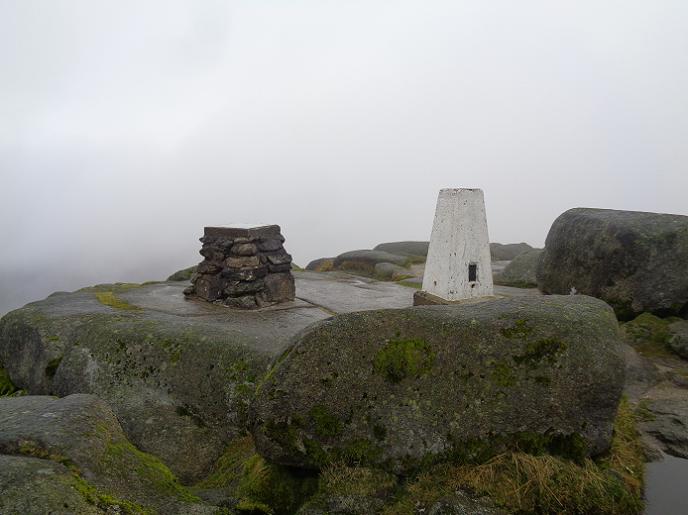 It took me a minute to find the way down again - it seemed to be a choice of nasty loose stuff that I was sure I hadn't come up, or a path which led along the main ridge, but the right path turned out to drop down from that one a bit further along.

I thought about going down to Corrie, but realised I couldn't because I had no cash for the bus back, so I headed back down the way I'd come up, with the clouds briefly fading away to give a view of islands to the left and Brodick and Holy Island ahead, and even a hazy glimpse of Kintyre. But although it looked for a while like it might clear properly, it really didn't. A view over Brodick

At the bridge I decided I was tired of following the same path, and kept on the upper track towards the castle, which gave me a nice view of autumn colours in the stream valley down below. A different way down

This way led over some doubtful stepping stones in another stream - I only discovered afterwards that there was a better way over a dam - and down through thicker forest. I felt a bit guilty about telling a couple who'd missed the arrow at the bridge pointing to the main Cladach track (rather than ignoring it like I did) that they could get down that way, because although it was true, in involved two staggered junctions where the path crossed forest roads, and then a crossing of a very muddy field.

I made it down to the castle in the end, though. It's very impressive solid Victorian, even if Victorian isn't one of the things which generally impresses me - and had a lovely autumnal garden. I decided to go on making things different by following the shore from Cladach back to Brodick - although I followed it a bit too faithfully and had to pick my way inland quite a bit to find the bridge over the river.

After wandering back through the village it had somehow turned into a beautiful evening - pearly blue - and although I thought about going for a drink I ended up just sitting by the seafront waiting for the 19:40 ferry. It's a shame about the views, but there are at least 4 more hills left to do on Arran... Re: Goatfell the ordinary way

Nice idea to visit the castle on the way back. This brought back good memories of being up last August which seems to have been a lot busier than the day you did it!