I was staying over at Lochgilphead, so had about an hour's drive to Arrochar. It was a beautiful morning and Loch Fyne was looking jus' fine 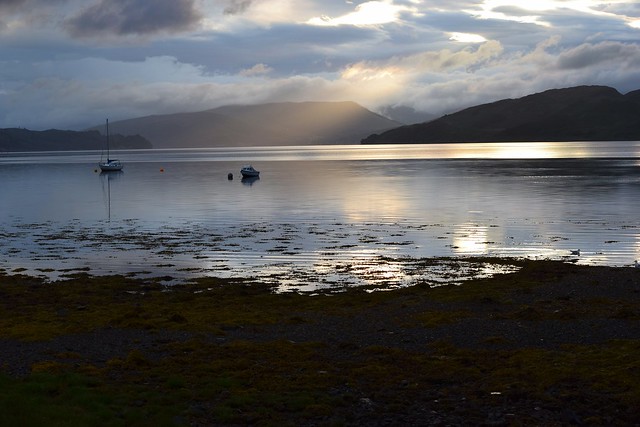 The carpark ticket machine at Succoth was out of order, so parking was going to be free for the day.

I'd decided to Leave Ben Arthur either til last or til another day with some pals, so my first mountain in this region was going to be Beinn Narnain. The right turn up the the trees isn't ever so obvious (which is a good thing!), and I probably spotted it by accident. The trees were heavy with dew and recent rain so they gave you a really good refreshing sloppy soak as you walked - bliss in the August heat. There were deer-prints in the mud too. 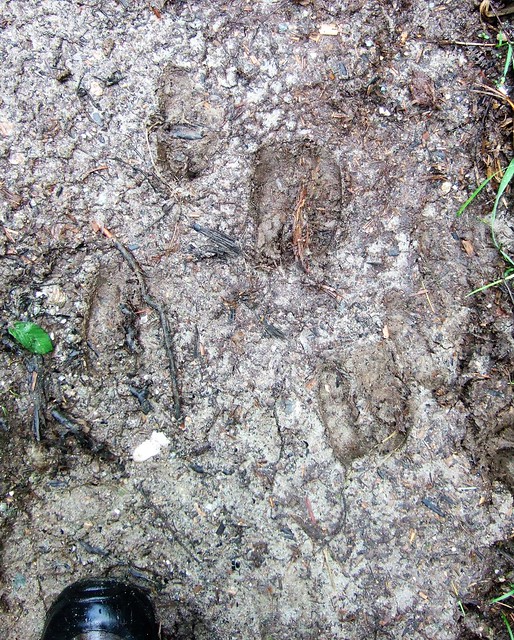 Once up and out of the woods, I got my first look back at Loch Long. Over the loch, Cruach Tarbairt and the Glen Douglas peaks were radiant in the morning sun... 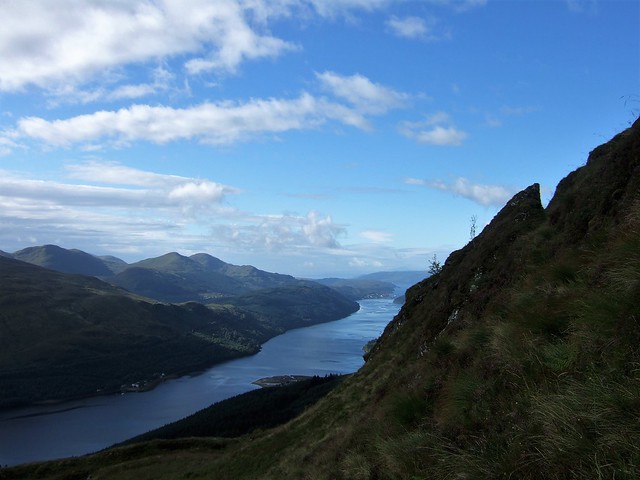 ...and I was enjoying Second Breakfast of blaeberries

So far I'd had the hill to myself, but as I was foraging around, a chap appeared. I headed up the the ring contour as he carried on past on the path, and we shared a cheery wave. This is the first view you get of the Cobbler, and it's a superb view as it appears over the grassy flank! 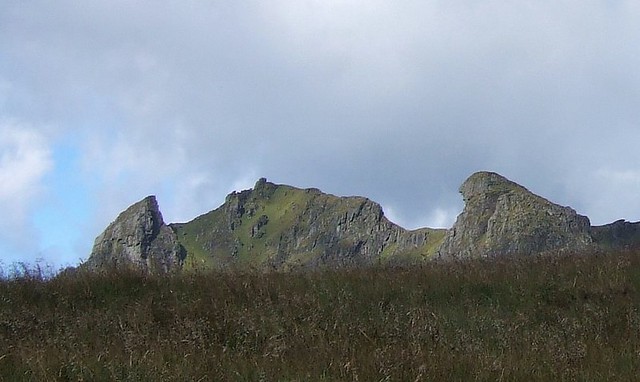 I'd been trying to pick it out in September when I was up in the Trossachs, but I didn't fare very well!

Beinn Narnain gets fun at this point, with some nice scrambling, and then some more just below the Spearhead. I passed a couple of sheep looking out at their vista. It must be a lovely place to live on a morning like this, I thought, and then wondered what it looks like to sheep. Don't they have a really good peripheral but a really rubbish depth of vision? 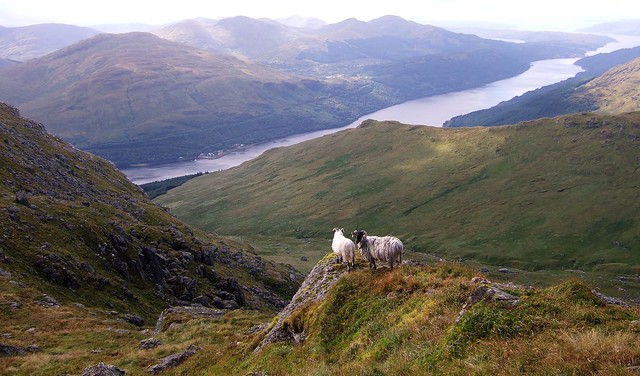 Lovely views of Ben Lomond with Loch Lomond below from the top... 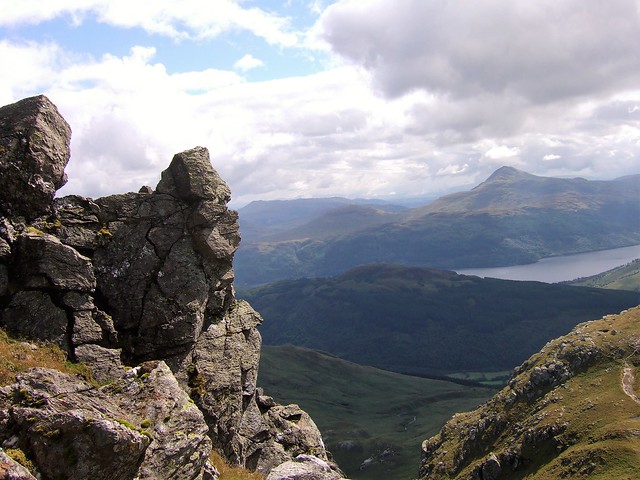 ... and it was sheer joy to have the place to myself.

Over at the trig point, Beinn Ime dominated the view. 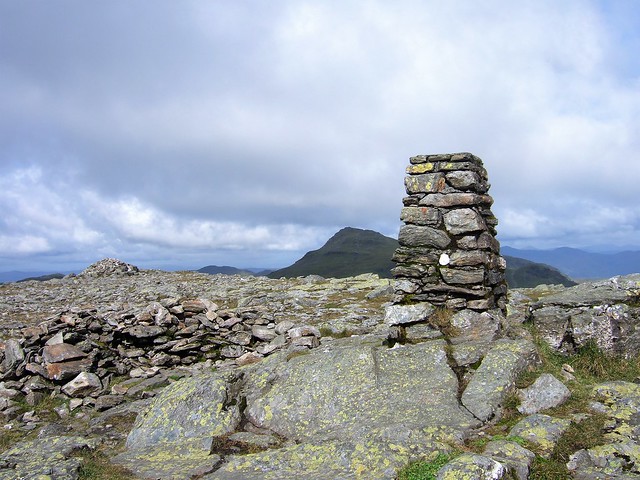 I decided to test my compass skills, just for the hell of it, and my bearing took me to the cairn, then to the next one. And after that, it was really clear how careful you'd want to be in poor visibility, because the same bearing basically drops you off the crags to the rocky flank below

It's an ankle-twisty sloggy drop to the Bealach, and then it's a right boggy slog up Beinn Ime from this direction! Quite a contrast to the loveliness of the Beinn Narnain's scrambles and lumpy bumps. But worth it for the views - especially for me as I've not been in these Alps before. 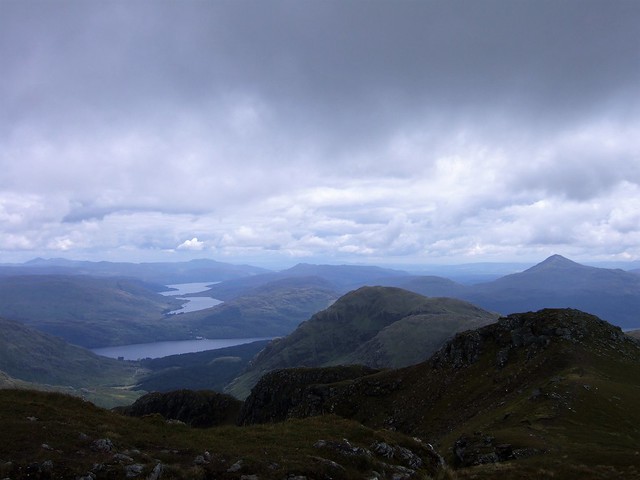 What I wasn't expecting to find up there was a bear

But these guys were doing the three summits, starting with Ben Arthur, raising money for a charity called Newlife, so they had a donation from me a couple of days later: 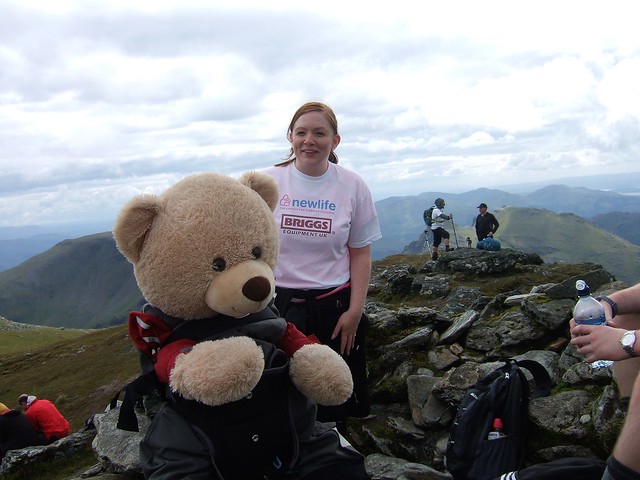 Some of them "aren't walkers", so they'd done pretty well to bag the Cobbler and Beinn Ime summit so far, and if they did make Beinn Narnain - especially scrambling down rather than up

, - well, hats off! I left them to the summit and had a coffee and a roll looking west (up above the Rest and Be Thankful basically).

So, as I walked down, was I going to do Ben Arthur as well? Decisions decisions. There were streams of people going up the stepped path. Ulp. Decision made. Too much human for me - I'd already had a frown at the banana skin at the summit of Beinn Ime - so I carried on down to the woods, seeing another banana skin, plastic bag, etc, etc under the Narnain boulders

. Still, on the zig-zag path out, there were loads of raspberries growing in amongst the brambles, so they were a treat for the walk out (as long as you pick carefully at this time of year and avoid eating the raspberry beetle grubs lurking inside!). 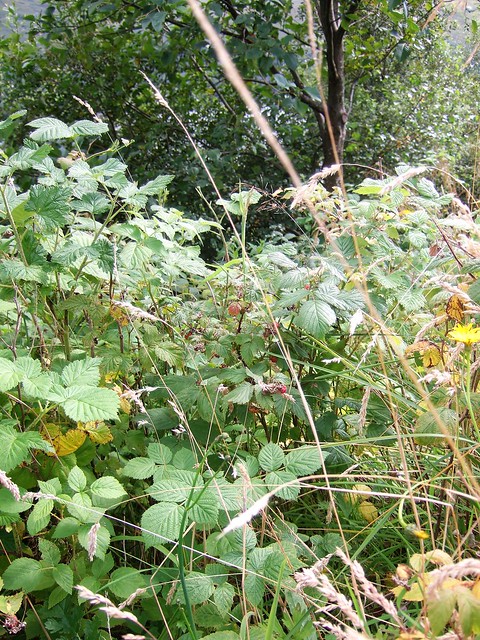 Nice report, hopefully the first of many.

Sgurr met a penguin climbing a hill once - I think it was either East or West Lomond in Fife. Oddest thing I've met was some romans walking Hadrian's Wall.

I enjoyed your report and it was nice to see the views from Beinn Narnain, it was thick fog when we were up there and we had to use the compass to get off the summit in the right direction.

My grandson and I met this group on Beinn Narnain and had a chat. Only when we separated did he mention something about a bear in a rucksack, which I obviously had not noticed. I thought he meant lucky mascot sized bear!!

Mal Grey wrote:Nice report, hopefully the first of many.

Thank you Mal. I've just read your Thousand Lakes adventure with a canoe on your head. It's wonderful!

It's like being in royal company (in a good way)

Cairngorm creeper wrote:I enjoyed your report and it was nice to see the views from Beinn Narnain, it was thick fog when we were up there and we had to use the compass to get off the summit in the right direction.

Thank you! Presumably you didn't do what I did and navigate yourself off a rocky edge.

johnscot55 wrote:My grandson and I met this group on Beinn Narnain and had a chat. Only when we separated did he mention something about a bear in a rucksack, which I obviously had not noticed. I thought he meant lucky mascot sized bear!!

How had you not noticed?!

Thank you though, because that does answer the question of whether they did Beinn Narnain. I'm glad they did. Nice bunch. Hope you and your grandson had a beautiful day too!

Well, if it's any consolation, as I was trudging up from that side, I did think "hm, bit dull this - not doing it again".
Similarly, though more because of crowds, I wonder if I'll ever walk the Cobbler...!

Excellent report. I really enjoyed reading it. I'm doing Beinn Narnain and (hopefully) Beinn Ime this Saturday, then a wild camp out. If I'm fit enough may even consider the cobbler, although the dark nights may not allow.

It's always beneficial to read other reports before a walk yourself I find. Once again, excellent report and thanks for the heads up on what I can expect

Nice report Emma, and you had a good day for it too. Some lovely photos.
The people doing their charity gig would probably have gone back down Narnain the same way they went up it, and back down the path to Succoth from the bealach.
A couple of years ago, a girl I know (also Emma) had a friend who wanted to do something similar with her sister, but Emma was the only one with hill experience. I gave them the route up to the bealach, doing the three summits from there, and back the same way. Despite the lack of fitness of the other two, they all managed it!
I find Beinn Ime a very dull hill compared to the others round about it, and the neighbouring Corbetts at the Rest and be Thankful are all nicer too, but it's a Munro, so people want to do it!
Walking across to A Chrois is a nice addition to Narnain, but many people ignore it as it doesn't 'count'. It makes a very pleasant round though

Here's to your next report, and some more fine walks