beinn-eunaich.gpx Open full screen  NB: Walkhighlands is not responsible for the accuracy of gpx files in users posts

We were feeling pretty smug when our midweek day off coincided with a forecast for sunshine for pretty much the whole of Scotland. For once then, we had the whole of the Highlands to choose from for a hill walk, though with the recent rain we opted for a couple of hills with little bog: Beinn a' Chochuill & Beinn Eunaich. Just don't ask me to pronounce them

The way that I'd interpreted the MWIS forecast was that there might be some morning fog but it would all clear. So as we started walking up the track under cloudless skies, all was well. The eastern slopes of Cruachan to the left, Chochuill ahead and Eunaich to the right. A little further up there were a number of Highlands cows about, but they didn't seem remotely bothered by us walking past. But the sheep wanted some attention too: The track continues gently ascending, with a slight dip to cross the Allt Lairig Ianachain. About 200 metres after a zig-zag to the right at a fork, a cairn marks where a boggy path starts ascending directly to the left: The path soon fades away, but eventually reappears further up. The pathless section wasn't too bad underfoot - mostly shortish grass and only a little squelchy. Looking back from much further up: Beinn Eunaich to the right: And Cruachan to the left. That innocent cloud over the top of it? As it would turn out, not so innocent... On reaching the ridge, great views greeted us to the north over the Black Mount, Rannoch Moor and the back of Glencoe. We couldn't make out Ben Nevis though. Bright sunshine on the ridge (the first summit is a false one): The true summit of Chochuill: After having stripped down to t-shirts for the ascent, it was chilly on the tops - there was ice on a puddle by the cairn and frost on the north-facing slopes.

West towards the mouth of Loch Etive: Glen Kinglass to the north-west: The wind was stronger than forecast too, bringing the cloud over the top of Cruachan towards us. We were still feeling smug at this point: "Good thing we didn't climb Cruachan today... we'll be on Beinn Eunaich by the time the cloud reaches Chocuill..." As we began the ridge to Eunaich, an innocent-looking cloud floated across the summit ahead. 15 minutes later, after enjoying the ridge: Looking back from the ascent of Eunaich, the cloud was lowering further on Ben Cruachan, and the blue sky overhead had all but disappeared: 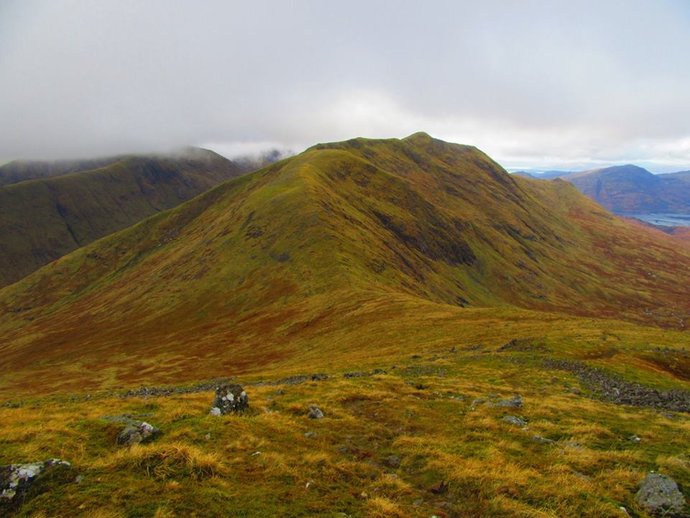 The ascent became rocky as we entered the cloud. And that was the last of the views for a while, though we did spot a solitary ptarmigan: Summit "views", and I was wishing I'd brought my thicker gloves: Visibility was still reasonable enough that it was easy to spot the path south from the summit. This descends quite pleasantly until about the 500 metre mark. Very soon we were back below the cloud, which seemed to be lifting again anyway. Loch Awe and Kilchurn Castle below: Looking across back to Ben Cruachan and Beinn a' Chochuill: We had a discussion about whether sheep get cold. Getting from 500 metres down to the track at 300 metres was on one of the most unpleasant paths we've encountered for a while: steep, eroded, slippery, loose, and traversing at an angle so you constantly worry about twisting your ankle. We were glad to get down without injury!

A good reminder about how quickly the weather can change today, even when the forecast is so promising. As for the walk: excellent views and quite straightforward, apart from the final descent. Definitely beats working though