Some hill days live long in the memory for all the right reasons, and some for all the wrong ones. This was a day for both. A last minute decision saw me joining Martin G, Parminder, Ross, Gregor and Sue on the iconic route up Gairich, that iconic solitary guardian of the western reaches of Munros, with a stunning profile seen from the start . 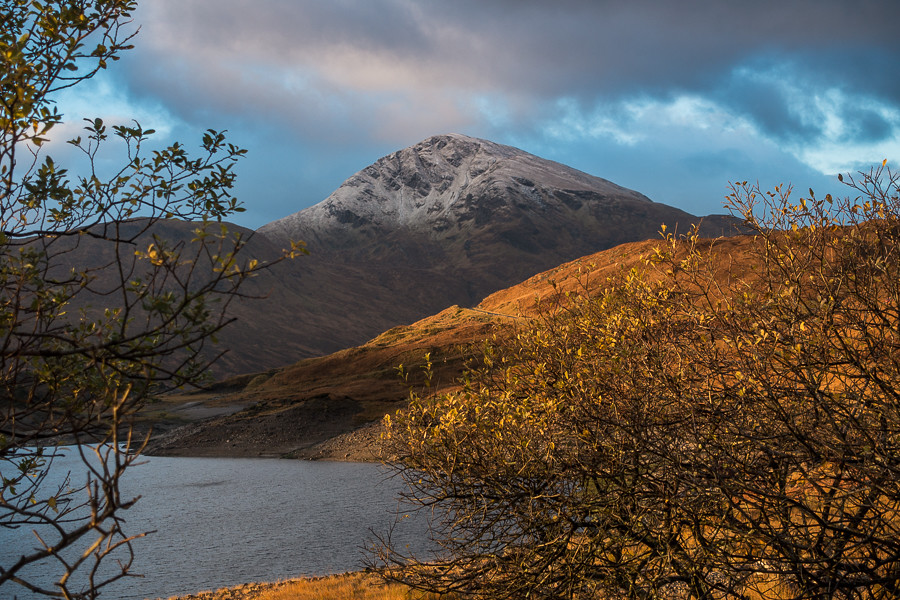 This was my first venture into the area, I'd never travelled the narrow road to Kinlochhourn, but was to get to know it quite well in the next few hours ...

We parked at the dam, there's space for 3-4 cars just beyond. The hill stood imperiously and watched as we made our preparations in the cold, bright air. 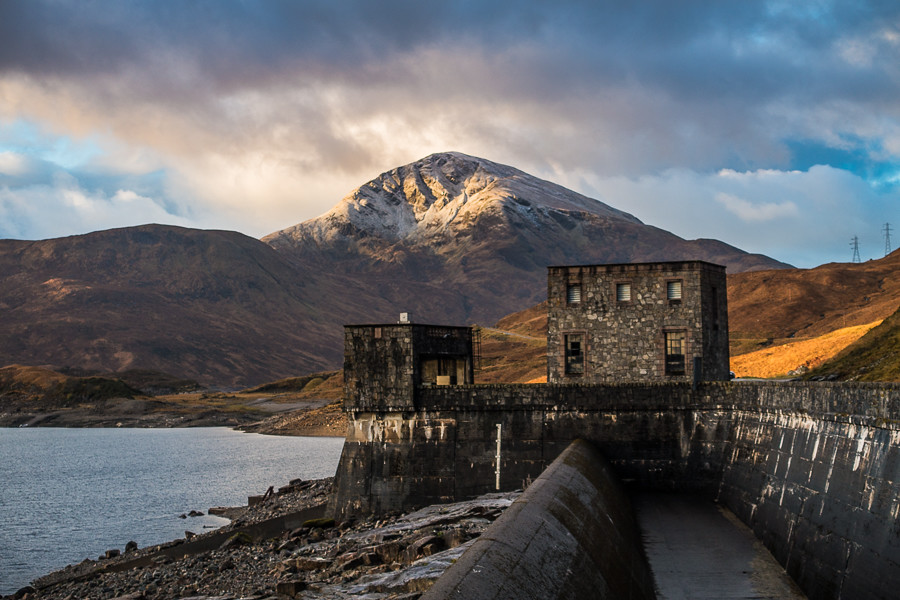 Looking east from the dam: 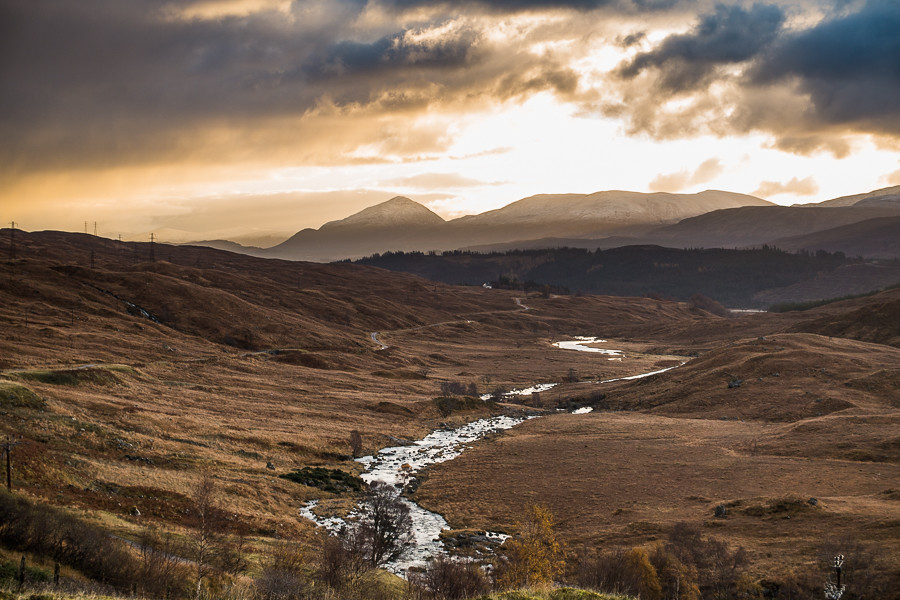 We would take the traditional WH "book" route, and from the start this led us to enjoy the many water features that Gairich endows itself with. 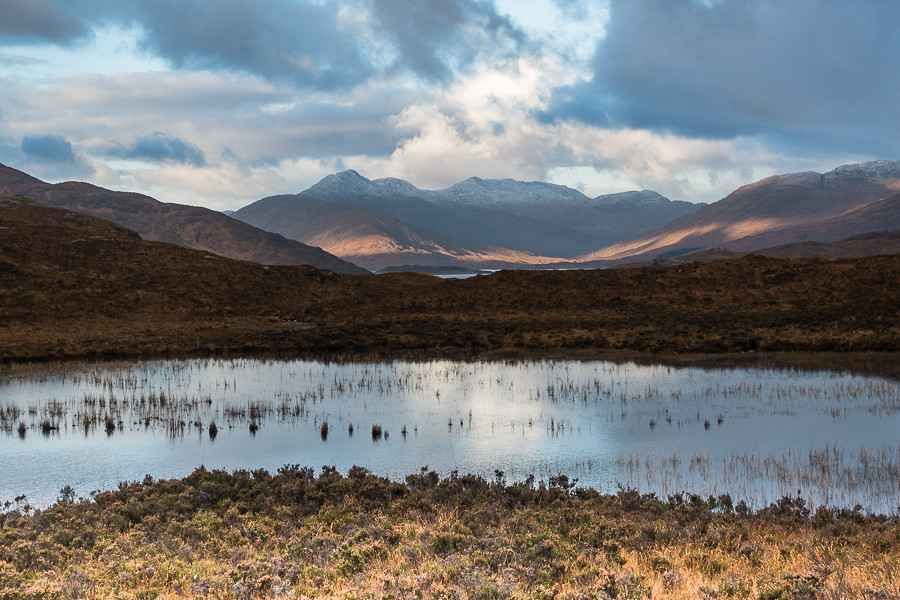 Interestingly the water in those features mainly takes the form of bog, primeval slime, more bog, primeval ooze, and occasionally just water itself on the rare but gratefully accepted bits of stony path. The first 3.5 km takes you along said boggy path to a junction at some forestry, seemingly moving away from the direction of the hill, but in reality just a bit of a dog leg.
We enjoyed our first snow shower of the day, just a tiddler to get us in the mood.
Martin self-levitating, just making sure the basic hill skills were still there: 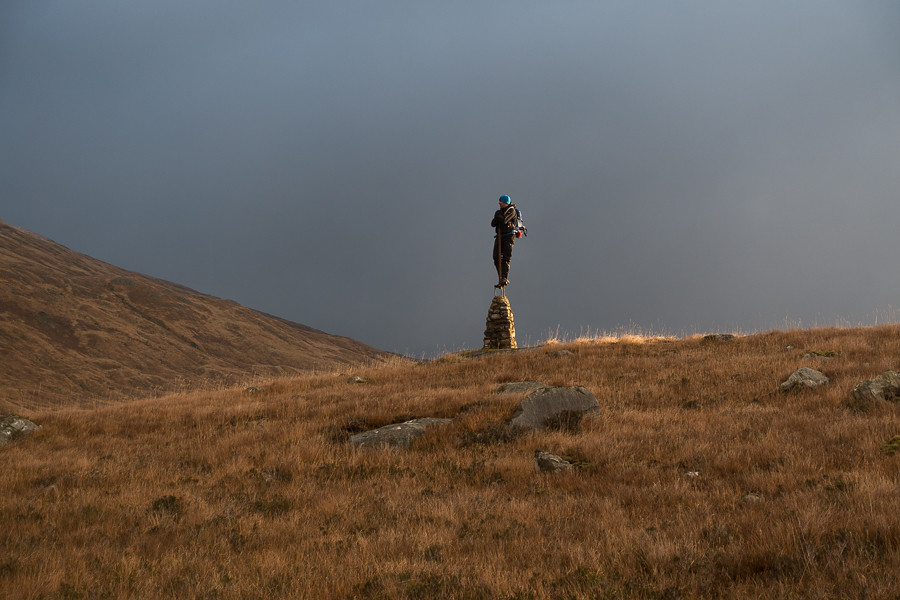 The path drops down to a corner of forest: 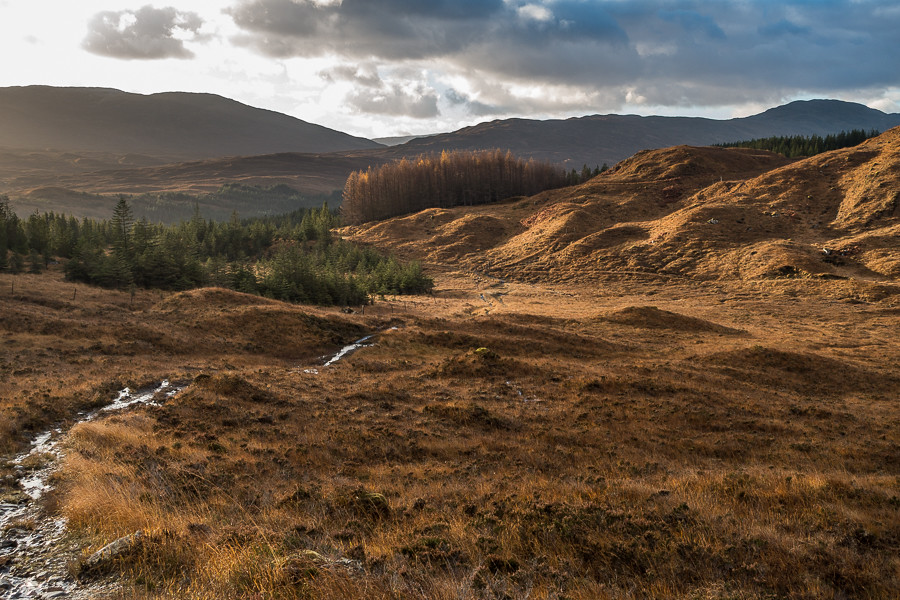 Martin "Marco Polo" Gilmour had taken a diretissima option across country to avoid the worst of the bog, and we reunited at the forest junction to tackle the hill proper, which starts with a short steep, and, yes, you guessed it, boggy/muddy section up the side of the fence. Coming down to the forest corner: 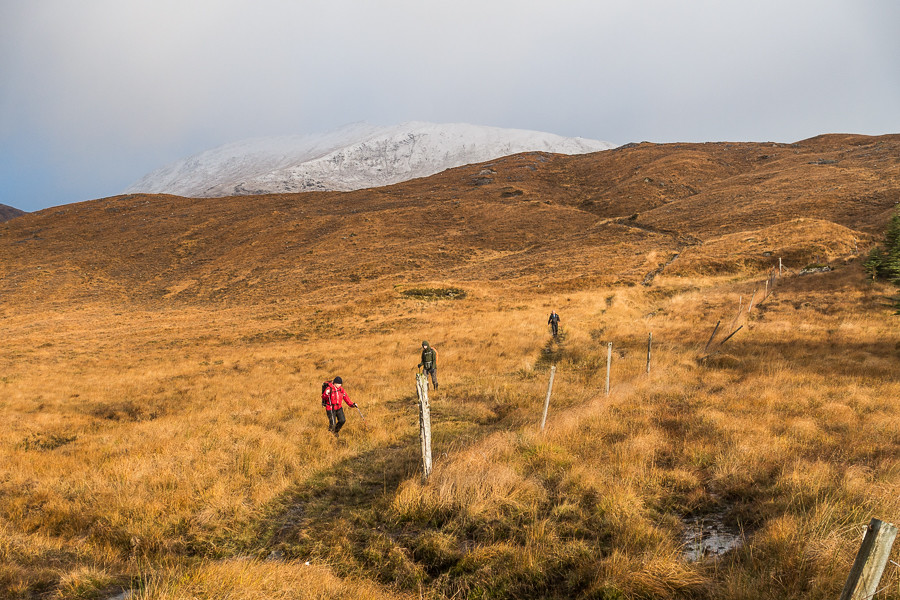 After this section the path became a bit better, although the effects of many days of rain and snow showers was evident. Eventually we came out onto the flat (and once again reassuringly boggy) plateau. In between driving snow showers the views were stunning, Loch Quoich with Sgurr a'Mhaoraich in the cloud: 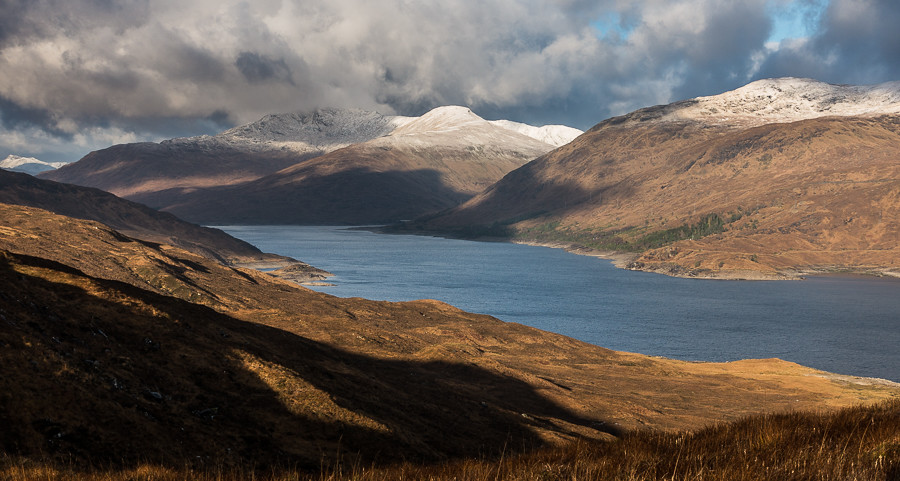 Gairich summit ahead, at last seemingly getting closer: 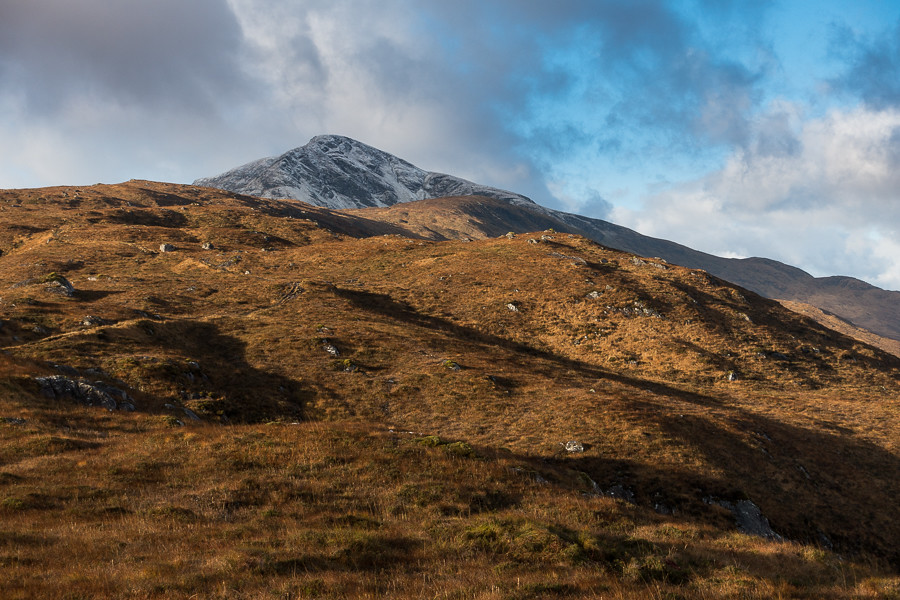 Martin took some time to offer supplication to the hill, although resisting the temptation for human sacrifice to keep the mountain gods happy: 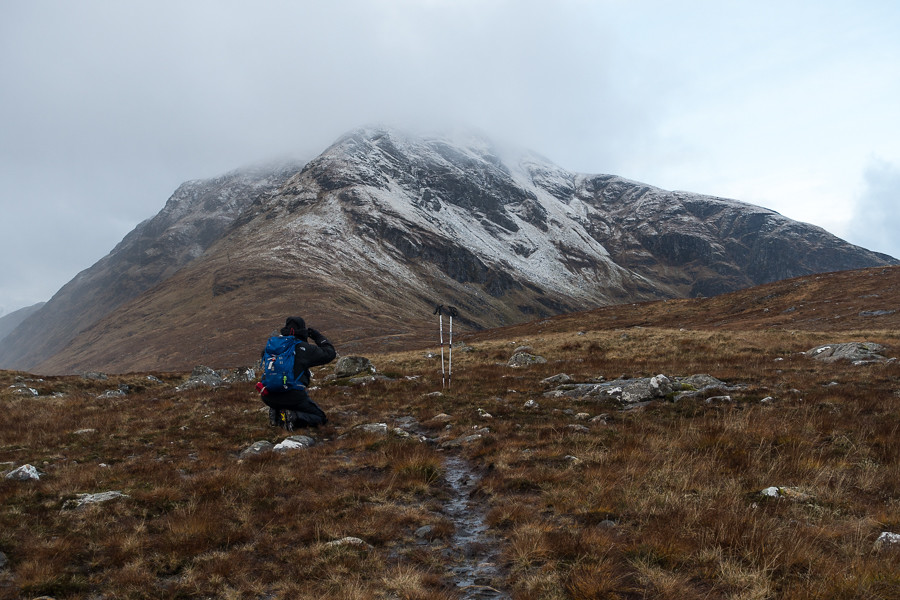 After crossing the (boggy) plateau for about 1.5 km the final 300m ascent begins in earnest, with a drier path that winds its way up the hill, open at first then through a mild portion of scrambling as we hit the snow line. Martin and Gregor taking it all in their stride: 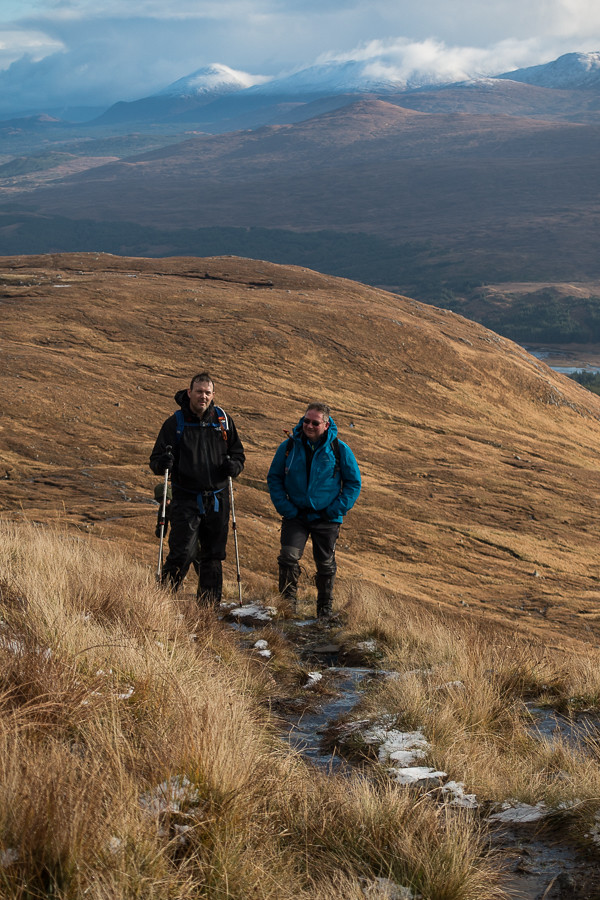 Loch Quoich, with dam in the distance: 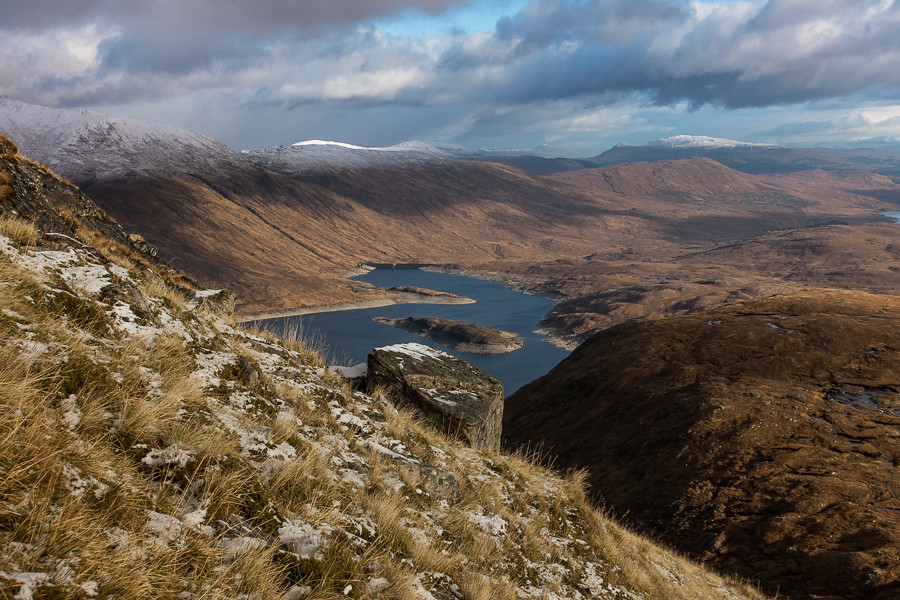 Gregor on the scramble: 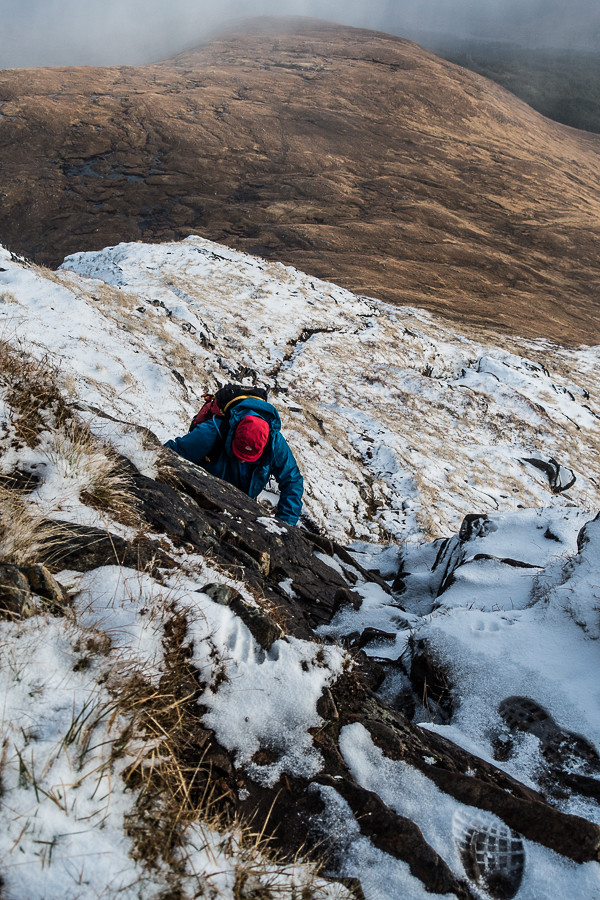 On the final push: 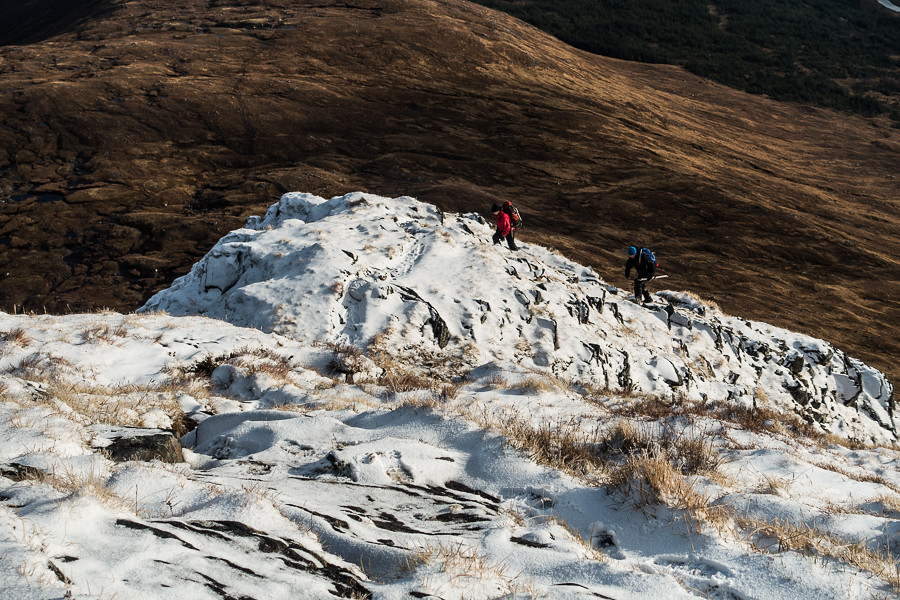 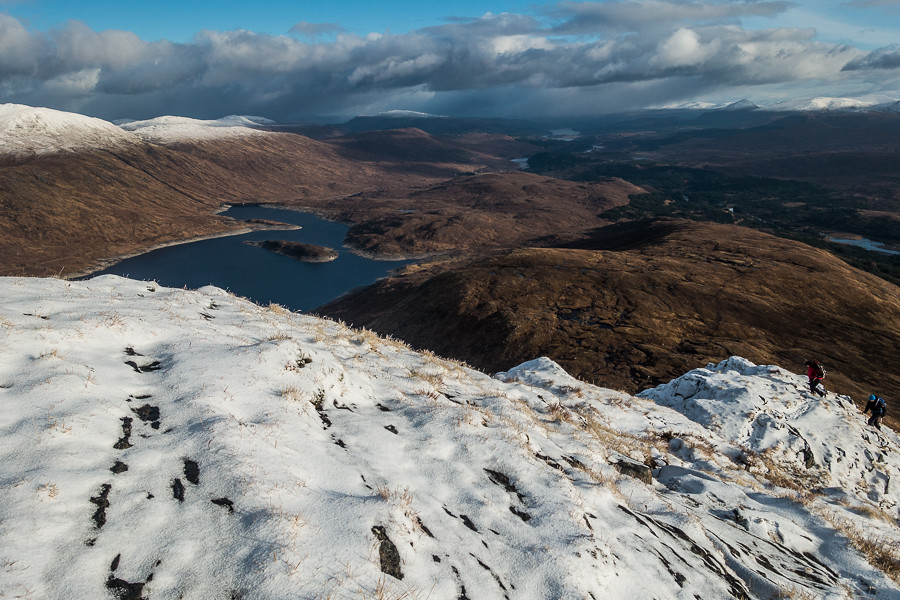 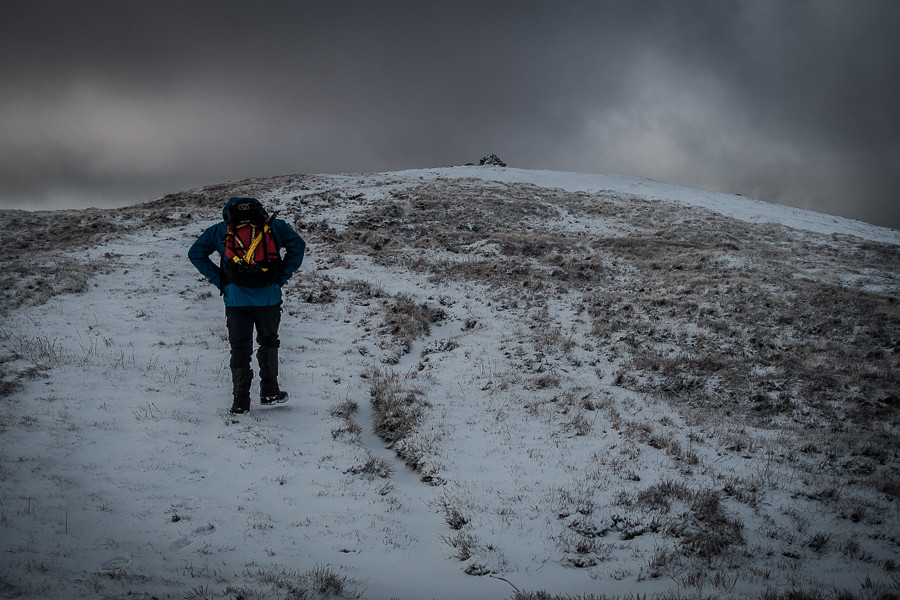 It didn't seem to take all that long to reach the summit cairns - it is one of the "smaller" Munros after all - and we were blessed with a decent break in the weather from the intermittent snow showers, to savour the extraordinary views.
Obligatory summit cairn shot: 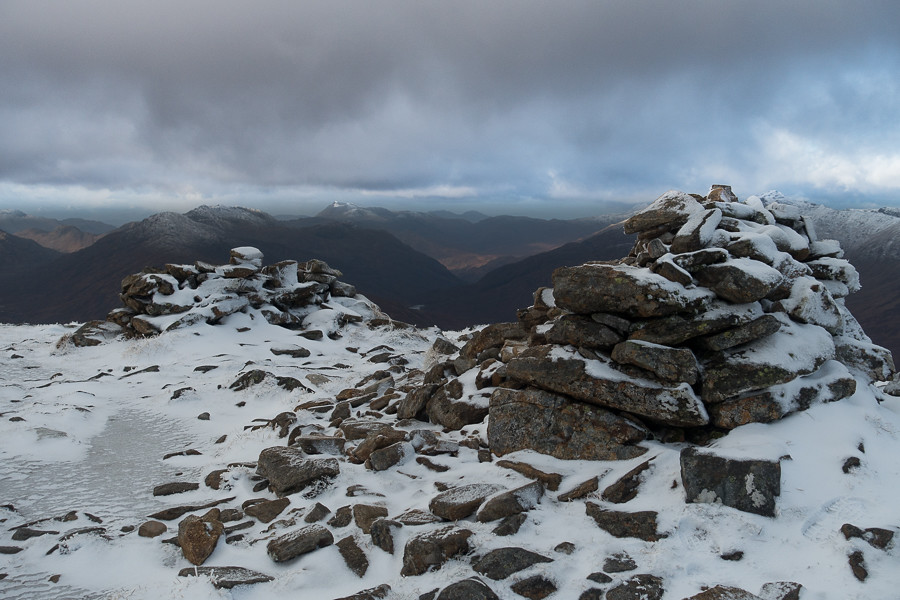 To the South Glen Shiel Ridge: 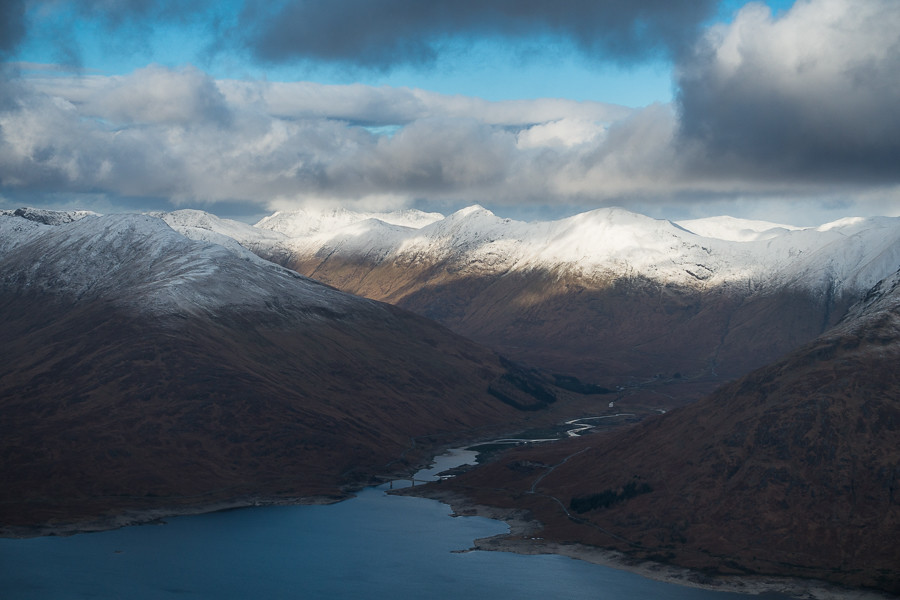 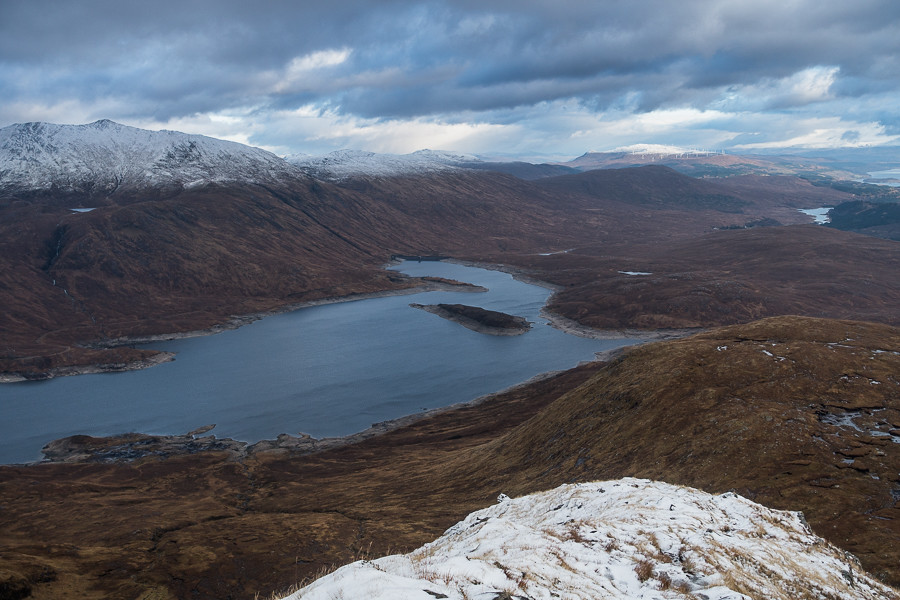 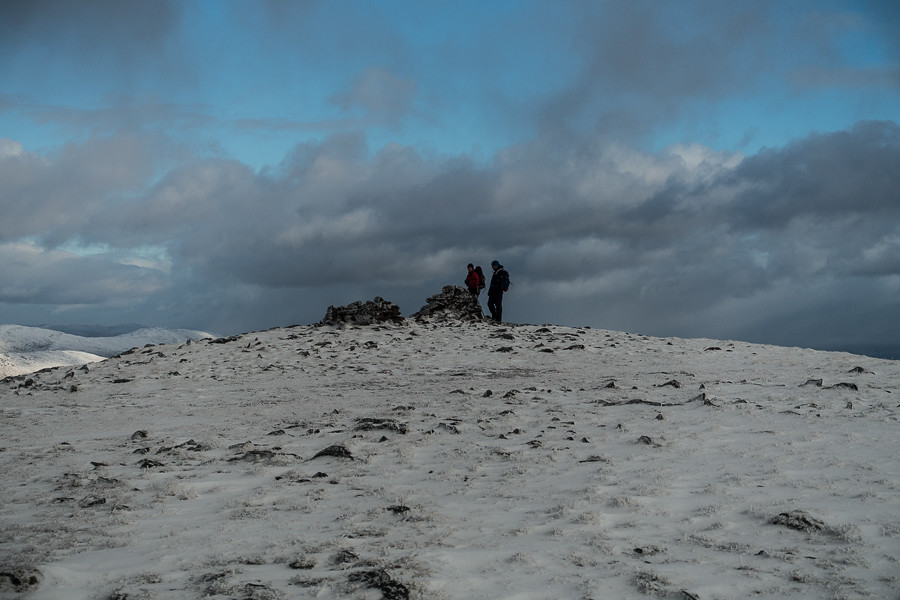 Eventually we were driven off the summit by the bitter wind and the prospect of impending showers, and made our way carefully back down the snowy hillside. 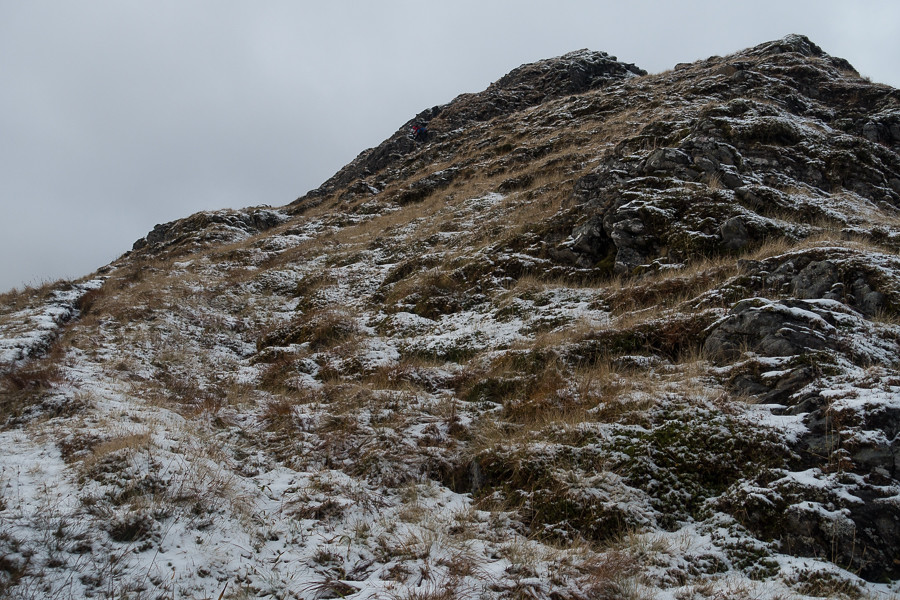 Sue, Ross and Parminder walking down, deep in contemplation (and bog): 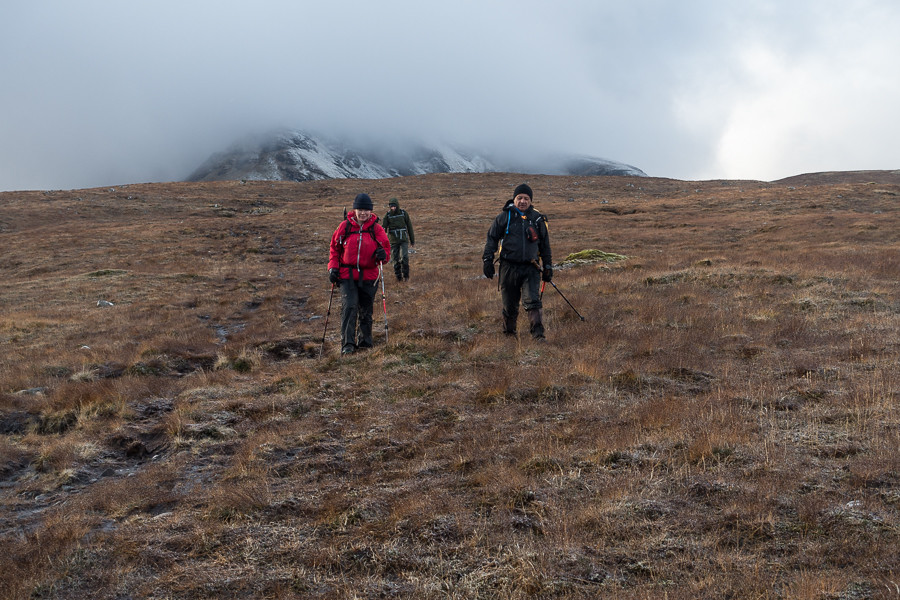 We stopped at the bottom of the summit slopes for a bite to east, before taking on the bog-fest back to the cars. And at some point in the next hour or so (mini) disaster fell. Unbeknown to him at this time, Martin's car keys were wiping a farewell tear, as they prepared to eject themselves through a hole in his shirt/jacket/whatever pocket, to end it all in the depths of the bog. Anywhere in the next 7 km or so ...
Sadly, Martin and us weren't to find out about this until we'd covered another 4-5 km and were halfway across the final section from forest to dam. After 20 minutes or so of fruitless backpack and pocket searching in the fading light, it was obvious that the car keys had ended it all back up on hill. Martin and Parminder decided to walk back to the forest junction to see if they could find anything, but given the nature of the path and continual bog hopping, it was a forlorn hope.
The other four of us carried on back to the cars, and I drove back to the hostel in South Laggan in the gathering gloom, avoiding the many deer on that narrow road. After dropping the others off I returned for Martin and Parminder, again just avoiding deer in the darkness.

Last views of the hill: 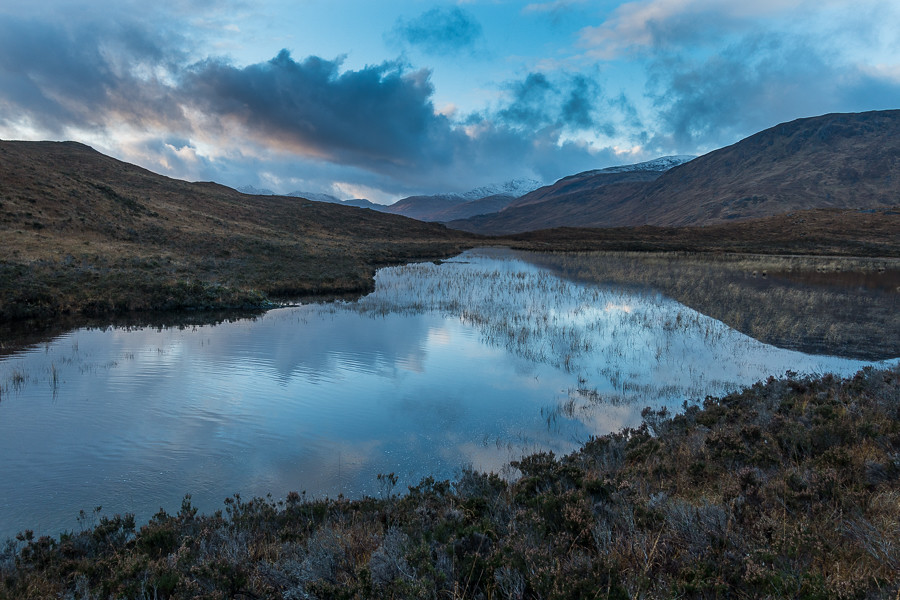 So, a frustrating end to what had been a fabulous day on an iconic hill. Martin got his car going again the next day with the help of a local locksmith type of chap, and the tale provided much "interest" to the gathered masses of WH walkers at the Great Glen Hostel that evening. One of the quiz teams even named themselves "We've got Martin's car keys". Kick a man when he's down why don't you?!

The moral of this salutary tale ....
1. Check your pockets for holes....
2. Take a spare set of keys!!! Either secure in the pack or back at the accommodation ...
3. Don't rely on praying to the mountain for good fortune

I didn't want to smile, knowing already about the bad part of the day, but couldn't not as the telematological theme continued relentlessly through the report

Some great pics here - I particularly like the 2nd pic of the mountain. Wasn't the weather just brilliant? (Malky and I were on the other side of the Loch) - if a bit nippy on the summits

I wonder whether, if Martin had paid his homage to the mountain, things might have turned out differently...???

Great pictures, great hill. Bit of a downer about the keys but lucky you had more than one car.

Glad the locksmith was able to sort things out. I have a feeling Martin is going to be the subject of key jokes for many years to come though

Shame about the keys

. But if there can be any consolation, the story will now become one of WH legends for sure!

Gairich looks amazing in white. Another one for us to repeat in winter conditions...

(We didn’t really have his keys ) poor Martin

We always make a sacrificial summit offering of Mountain Puja, in the form of Kendal Mint Cake.

Obviously, to minimise environmental impact, we have to eat it ourselves.

At first I thought this was all one of Martin's jestful, jolly japes until the realisation dawned after a few minutes that he wasn't going to pull his keys out of a secret compartment like a rabbit out of a hat to a chorus of "AHAHAHAHAHA!!!!".

I'm glad he was talked down from his initial plan of reascending the entire mountain to look for a set of keys that were most likely under two feet of bog at an unidentified location somewhere along miles upon miles of terrain. It was getting dark, getting cold, and although it's easy for me to say because it's not my keys, it WAS just a set of keys and NOT a person so I think a sensible compromise was reached in the end.

Other than that it was an ace day out. Boggy, granted, but a clear summit which is always a treat at this time of year. Ace report & photos J

Great report Jonathan, I remember the bog trot from a few years ago and that was in better weather, hence I avoided this trip for one on Ben Tee that was probably much the same. Also great account of events and well done for being the rescue driver as we know there is no reception in that area so going out to the main road is a must.

That does look a superb day Jonathan

I'm glad Martin resolved his key issue eventually.......I certainly won't laugh at his misfortune though, as had that been me I'd still be raging (and inconsolable) at what had happened.

Nice set of photos - rather atmospheric at times

Really enjoyed that Jonathan and your photo's capture the moment very well, that is apart from you know what

I love Gairich and had to look and see when I did it as I don't remember it being that boggy - I did it 3 years ago in June so that's maybe why it wasn't quite so obvious, it was also my half way point on the Munro quest.

Thanks for all the comments everyone. Good to catch up with those who were at the meet, and to hear from those whose sanity prevailed.

I leave you with Martin G's wise words after the event: "Nobody died, nobody got injured".
Yep, it was a pain in the proverbial, but at the end if the day it was just another logistical problem to sort. Plenty going on in the world to keep the persepectivometer busy.

Best wishes to all,
2MY

We were sitting in the car park outside Tesco yesterday, when a woman carefully loaded her shopping into the boot of her car, then her hand-bag, then slammed shut the boot. Then screamed. The keys were locked in the boot. She had 7 minutes to get to work. Last seen rushing into Tesco to borrow a phone (phone also in handbag). At least she knew where they were.