Tom Buidhe and Tolmount were the last Munros still to do East of Glenshee. I've been close to them many times (East Glenshee Four, Loch Callater, Jock's Road), but somehow in the end they were always left off the days walk.

While planning out the trip I thought that an obvious route would be to climb them from Glen Isla and Canness Glen/Caderg and was surprised that there does not seem to be any walk report online. With forecast looking reasonable yesterday (and least not too much wind) I decided to see for myself.

Not one for early starts I set our from Edinburgh at 9.30 and arrived at Auchavan in Glen Isla at 11.30am. I had my bike with me and the idea was to cycle up to Bessie's Cairn (or as close as I could get to it) - the map suggested that after Bessie's Cairn the path would deteriorate.

First thing to note is that my decision to stay on the west side of the river was correct: the footbridge marked on the map at 193704 is no more Cycling was good up to the lodge and passable thereafter. After the Monega Path branches off the surface deteriorates somewhat. I had to carry the bike through one 200m stretch of big boulders and waterlogged path -- at the second stretch I gave up and left the bike, still about 1km short of Bessie's Cairn. Turns out I should have carried on, there is a third small stretch were I would have had to push the bike but after that there is a good path all the way past the Cairn and to the ruin at the top of the Glen.

I hadn't decided what route to take after this. Canness Glen looked the shortest route but I wasn't sure if it was possible to get out of the corrie (the rim looked very steep on the map). The stalkers path up to Caderg would be the safe alternative, but I suspected a peat hag and bog fest from the top to Tom Buidhe.

In the end a few hundred metres before the ruin at 194753 there is a vehicle ford through the river. From there it seemed a straightforward climb up grassy slopes to the prominent top (unnamed on map) just to the left of Fean Corrie. While the ford itself was too deep for dry feet it was easy to cross the river about 20m downstream. From there I pretty much followed the direct route up to the top. Walking up was as straightforward as it looked. Grassy, not too boggy and not too steep. Plenty of deer in Canness Glen and (I think) an Eagle soaring overhead. From the top nice views over to Glas Maol 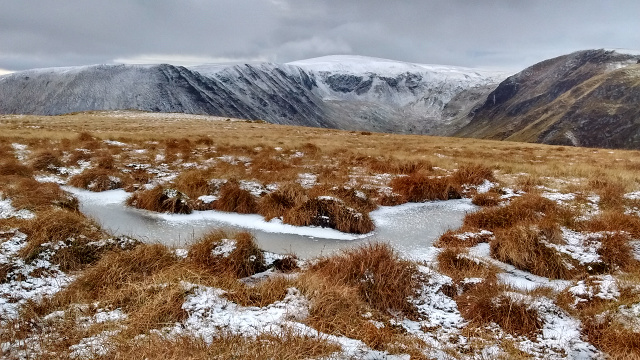 There was a dusting of snow and the ground was frozen so the going over the moor despite a few peat hags was good. Contoured around Little Kilrannoch and on to Tom Buidhe. So far I had seen no sign (not even footprints) of any other person. The walk over to Tolmount is straightforward - I did meet a group of three walkers. They should be the only ones I met all day. Late lunch break on Tolmount. The "High Cairngorms" from Tolmount

The way back was going to be via Caderg. I wondered about taking the path halfway up Cairn of Claise and contouring around to Druim Mor. In the end in partial snow cover I lost the path just after Ca Whims and decided to head straight to Caderg. This was the part that I had dreaded all day. In the end it was not too bad. Plenty of peat hags but ground frozen solid made for quick progress. I suspect it would be quite unpleasant in other conditions though.

From Caderg there is an obvious path down, though it becomes faint and I lost it after the zigzags at the top. Easy grassy slopes down so it wasn't too bad. A herd of deer about 100 strong in Caenlochan Glen made a lot of noise.

The bridge next to the ruin down at the Glen floor looks quite a bit worse for wear. Obviously not maintained for a while and I don't think it will last the winter. Should not be too difficult to ford the river here if it goes.

The light was fading fast at this point (just before 4pm), brisk walk to were I left the bike and I made it back to the car with just enough light left to spot the potholes while cycling down the Glen.

Re: Tom Buidhe and Tolmount from Glen Isla

Some very atmospheric wintry photos! I must admit that these two were on my list of hills that I would probably never bother with - the closest I have been was walking between Carn an Tuirc and Cairn of Claise. Corrie Kander was impressive, but it didn't seem worth crossing the featureless moorland to these two Munros.

However these photos show that they are worth a visit - and, perhaps at their best in winter. Just shows how the really great thing about walking in Scotland is the endless variety of scenery.