After having finished my last exam of 3rd Year yesterday, and with the prospect of not being in Southern Scotland until August next year, I thought what better to do than mop up 4 Donalds that had been nagging me for a while. I'm not one for winter walks usually, as despite being unnaturally sensitive to the cold, I also distinctly recall being in a 20-second whiteout at the Nevis range restaurant when I was younger. Although my brother and Dad were right beside me, something about all your bearings immediately disappearing and seeing nothing but white created an experience I've never wanted to have again. I also have barely any winter walking gear anyway! I knew the area pretty well from maps if the weather turned south, but the weather was meant to be excellent for the next few days.

[My full gallery can be found here: http://ianparkphotography.blogspot.co.uk/2017/12/lamachan-range-donalds-9th-december-2017.html].

I wanted as early a start as possible so was up at half 5 (although only on 3 hours sleep!) and got the 6:30am bus from Dumfries to Newton Stewart - the 500 service (£13.90 return) lets you take a bike, which ended up being a very necessary bonus. The sun was just rising as I arrived. I messed up the directions slightly and added 15 minutes to the journey but the tranquil light pink sky and gentle snow fall made up for it. I parked the bike at the beginning of my loop, 7km from NS (a bit short of the Auchenleck house). A couple of farm gates and I was onto the forestry path.

Almost some alpenglow on Millfore: Sunrise on Cairnsmore of Fleet: A precarious river crossing over to Drigmorn (a disused farmhouse) and onto the undulating craggy moor. This was much harder going than I had thought, thinking I had 'summited' 3 separate times, proclaiming "are you f****** kidding me?" and "are you f****** joking me?" respectively. It was 2 hours from arriving in NS to the top of Millfore, the smallest Donald of the 4. The wind was beating down so I devoured a sandwich, 2 cups of tea and was jogging over to the long bealach between Millfore and Curleywee in no time. Larg and Lamachan were entrenched in a shallow but persistent snow cloud (as was the Rhinns of Kells and the Merrick area) - I was quite apprehensive about having to potentially call the trip short if the weather got worse.

I had made it over to the White Lochan of Drigmorn in no time, but after seeing how steep and deep the col to Curleywee was, I was a bit disheartened. I can see why people omit Millfore now as it is an enormous slog away from the other 3. I planned out a route and made my way down to the White Laggan burn. Back to Millfore from Loch: The ground terrain was hellish at the base of the col and didn't improve until on the ridge up to Curleywee - easily one of the hardest Donalds so far. I had managed to keep dry feet until now. Fortunately, after arriving on the ridge, the summit was reached faster than I had thought. I knew time could easily go against me so was pushing along quite fast. I also couldn't see the cloud conditions at the other 2 hills so was even more apprehensive. The Bennanbrack ridge wasn't as precarious as previously thought and was guided by metal rods (all the way to Larg Hill). I took a lunch break at the far end of the craggy section before the easy climb to the highest summit of the day. Unfortunately, the clag didn't clear for the trod over to Larg Hill, but the enormous cornices created by the dry stone dyke on the ascent made up for it. Larg also had the deepest snow of the day (up to my knees). 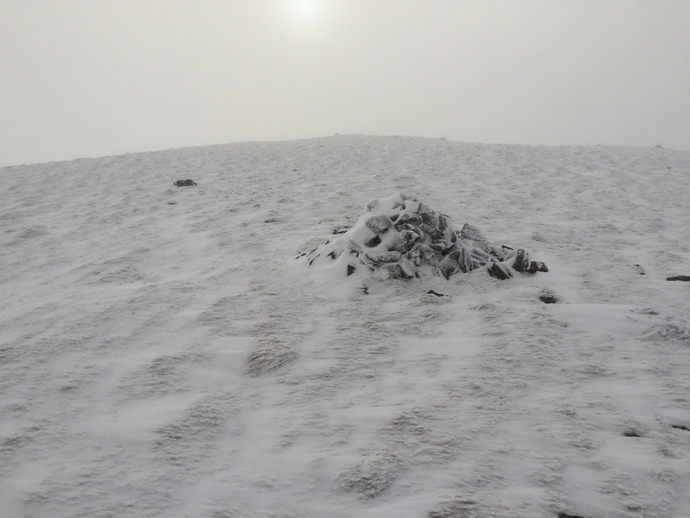 I accidentally kept following the dyke when I should have infact gone straight down after the cairn. Realised my mistake when I started going back up again. I descended into the corrie and backtracked to the other wall. I spied out a fire break that would take me to the first path, which was no bother with the map. After reaching the path and the clag clearing, I instantly joined a horrendous fire break to the main forestry path that would lead me back. It was made up for by a fox that didn't spot me. It was then a 1-hour trod back to the bike, although it felt considerably longer. I was getting really quite cold by now; my boots were enormous ice blocks with dirty frozen clumps clinging to every surface. I was at least in great time to get back to NS before the sun set. After a blisteringly cold cycle back, I found out that I had missed the early bus by 25 minutes. This then meant a 2-hour wait at the bus stop, only interrupted by a brief Co-op trip to regain the feeling in my hands and a walk around NS's outdoors shop; the proprietor of which described my expedition as 'brave'. I counted down the minutes, my feet on par with another experience as being the coldest they have ever been. Although almost 20 minutes late, the bus was warm and dry. I was absolutely shattered but content in the knowledge that winter walking is always a possibility, although I doubt I'll be doing anything as adventurous in this season for a good while! Something about this walk was very precisely emotive, pensive and memorable, and I still don't quite know why. Probably something to do with the very early start and the loneliness, but reading it back always fills me with a sense of melancholy.

Interesting way to approach these hills rather than from the north. Nice light especially early on - cheers

rockhopper wrote:Interesting way to approach these hills rather than from the north. Nice light especially early on - cheers

The Glen Trool approach did appeal, but until I can justify getting my hands on a car, I'll be sticking to the bus and bike! Wish I'd taken a few more photos on my cycle in as the colour of the sky was almost poetic

Thinking next Donalds will be the Ochils!

A really good read, and great photo of the fox

Cheers ancancha! It unfortunately looked up just as it went infront of some long grass

Like Rockhopper says a very interesting route which I can understand.
I enjoyed the majority of the Galloway Hills and the underfoot conditions are challenging at best, so a covering of snow would make every step 'interesting'.
Thanks for posting as someone may want to follow in your footsteps.

In my limited knowledge of these hills and how rough they are, that's a hell of a round for this time of year with all that soft snow. Even with a bike! Some really good photos in there as well, especially the fox and the ridge between Curlywee and Lamachan Hill

Fife Flyer wrote:Like Rockhopper says a very interesting route which I can understand.
I enjoyed the majority of the Galloway Hills and the underfoot conditions are challenging at best, so a covering of snow would make every step 'interesting'.
Thanks for posting as someone may want to follow in your footsteps.

Thanks Martin; I do think the snow helped out in a few of the easier sections, but the little glen between Millfore and Curleywee had a ton of hidden dips in between the high heather and grass. Hope I can end up finishing the Donalds on a similar day you did!

malky_c wrote:In my limited knowledge of these hills and how rough they are, that's a hell of a round for this time of year with all that soft snow. Even with a bike! Some really good photos in there as well, especially the fox and the ridge between Curlywee and Lamachan Hill

I think it would have been a relatively easy going round had I had all day - bike sections were definitely the coldest! Cheers Malcolm