With the continuing cold snap, and a fresh dump of the white stuff, another opportunity presented itself for my 3rd taste of winter in 2 weeks

. Again decided to keep it local due to ease of access to hills, lack of daylight, & a 6.30am rise (my usual for work). Decided on Narnain & A'Chrois, starting straight up hill on the old Cobbler path (no zig zags).

This route pulls up through the woodland following a line of concrete blocks that were originally supports for a cable railway used during the construction of watercourse diversions forming part of the Loch Sloy hydro-electric scheme. Where the concrete blocks cease, the path continues up Beinn Narnain's craggy south ridge.

Parked up and ready to start at 08.30hrs. The car park was covered in ice which made it difficult to get out of it, almost put my crampons on

Eventually reaching the other side of the road I joined the new zig zag path which most people use, however after 25m I took a slight path right and followed a stream up through the woodland.

Breaking out of the woodland & looking back to Loch Long 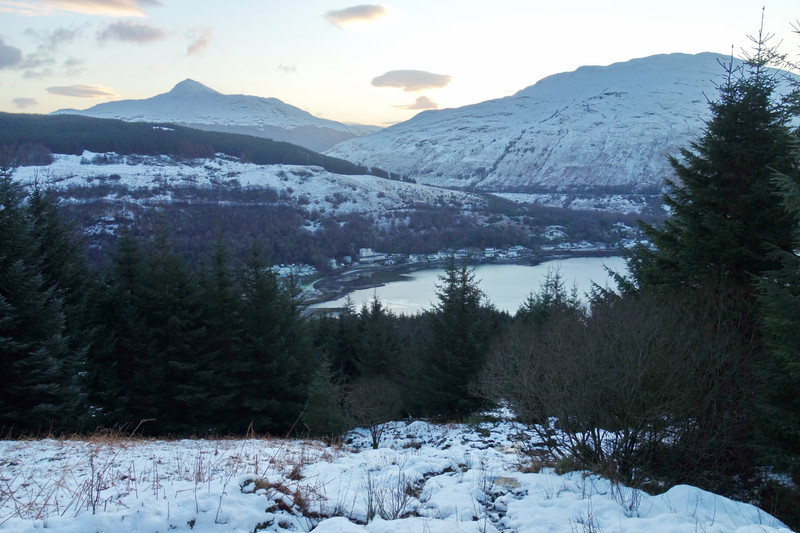 Ben Lomond on the left. 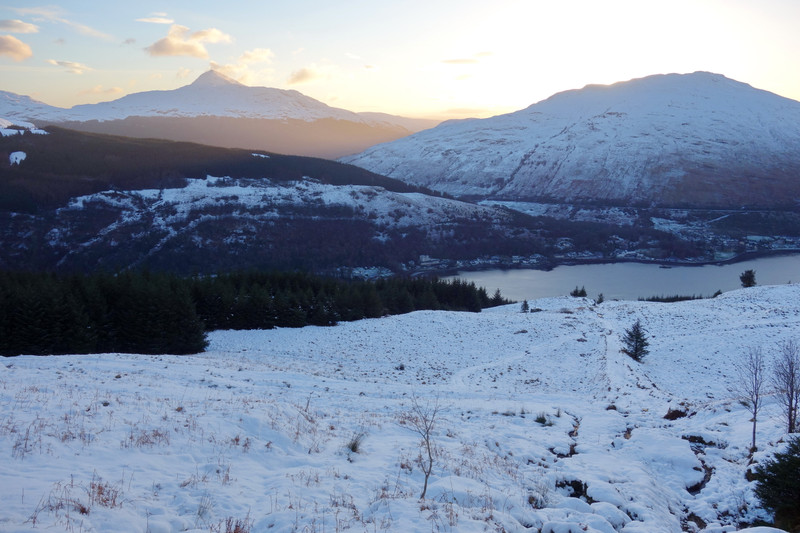 It was easy going through the woodland but that soon changed once in the open, the fresh snow in abundance and generally waist deep

The sun was now revealing itself from above the Luss Grahams 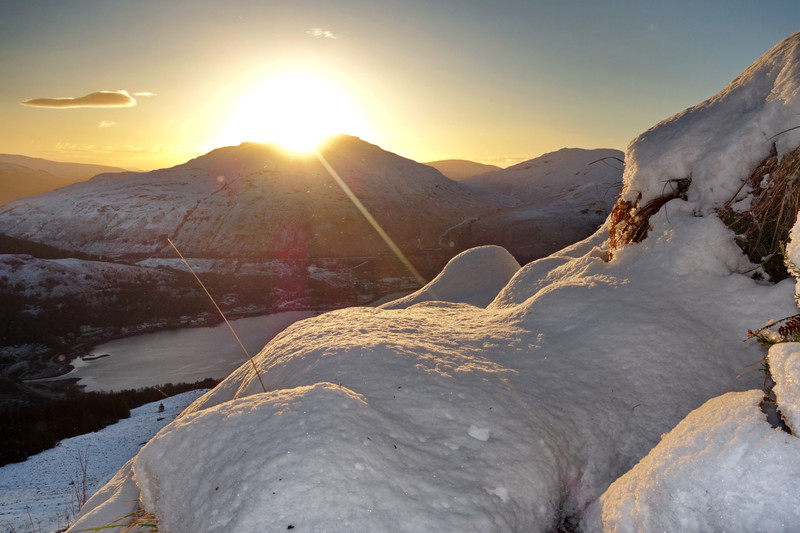 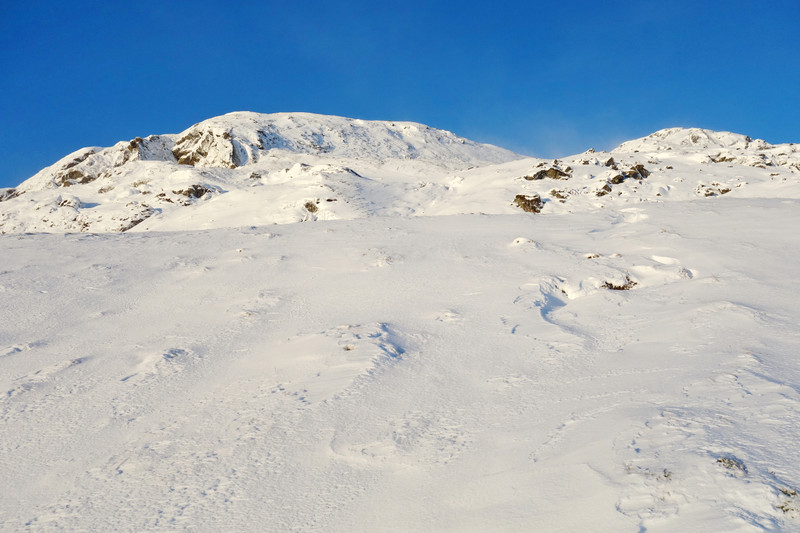 It was soon very clear to me that today's walk was going to be rather strenuous and epic, however I do like to challenge myself

Going forward quickly became very difficult and extremely slow going, actually felt I was heading back to the car park

. The wind was increasing and spindrift was cascading across the white slopes. But I was having fun, and there wasn't anyone to be seen 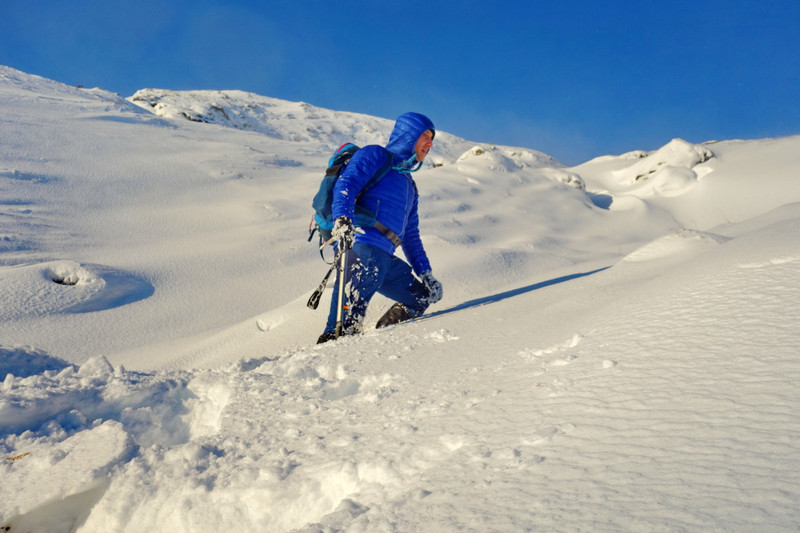 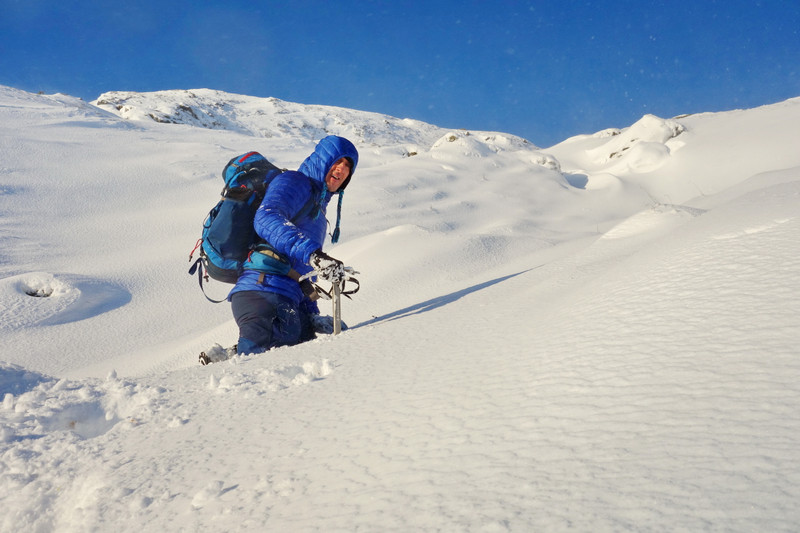 Its hard to put into words the physical exertion required to walk through such snow depths, its a relentless pursuit that doesn't get any easier. Many times I felt stuck in the snow, only able to move by actually crawling across certain sectors as not to sink. My route up was ever changing in trying to source the easiest ascent.

After a while I hit the crags! I was sure this would be equally testing, especially route finding.

A lone tree taking refuge in the lower crags. 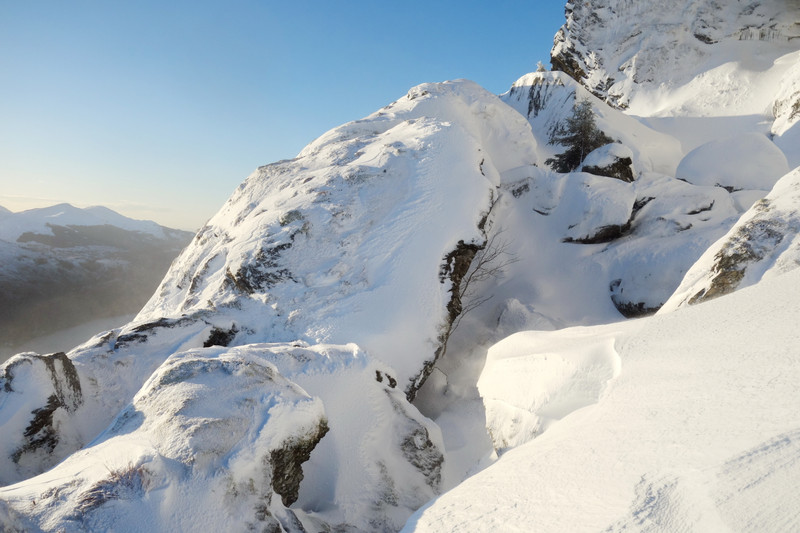 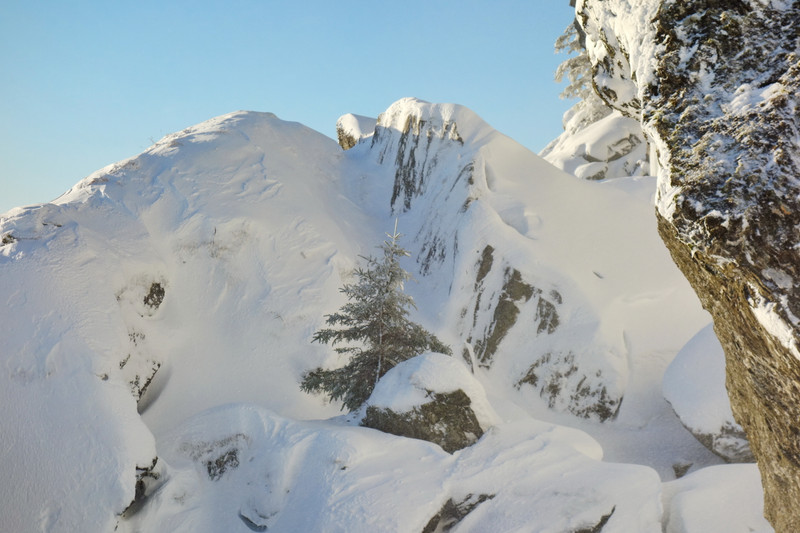 There are many false summits doing this route, but they do provide an alternative view of the Cobbler. Did I mention it was freezing...some proof of same 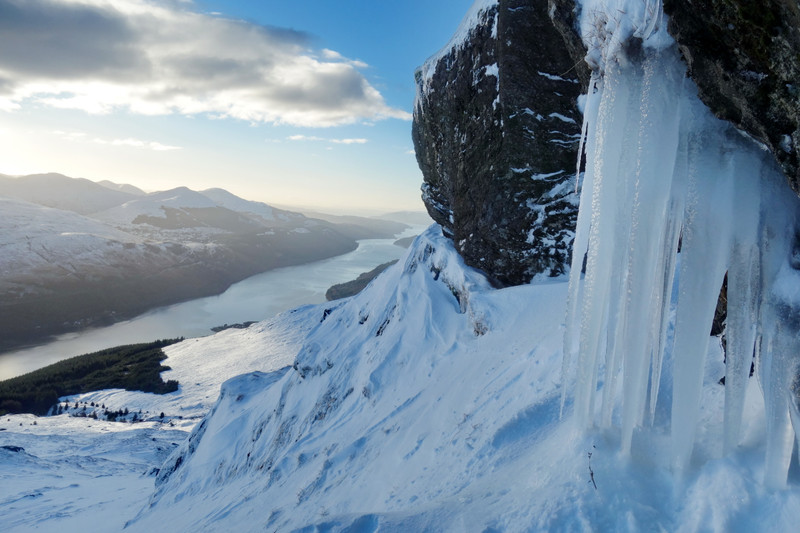 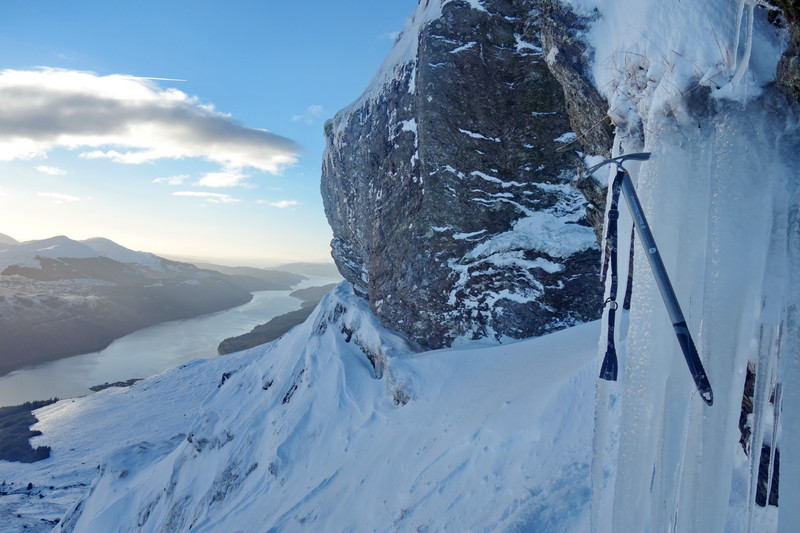 Over halfway (usually up & down by this time) and I felt I was getting slower! The last time I felt this slow was at 3000M up Mulhacen!

And yet another false summit, but again a wonderful view of the Cobbler 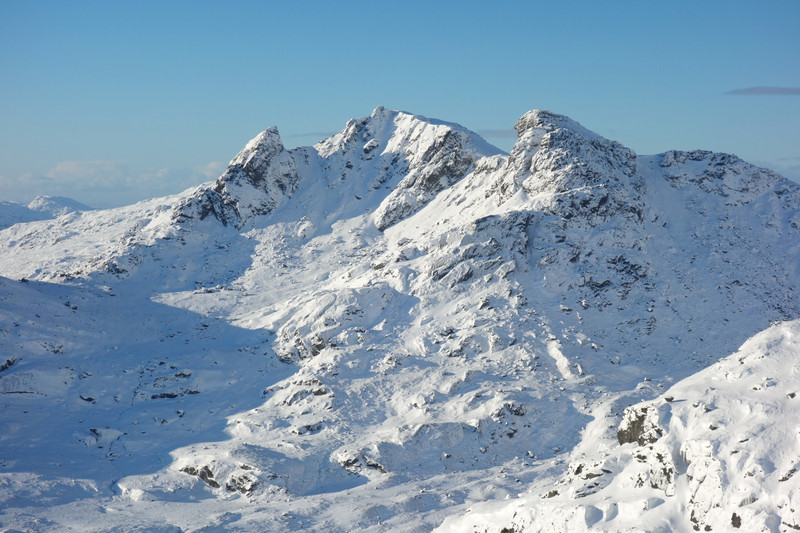 I realised my plan of adding A'Chrois was not going to happening, I'd be overjoyed just to reach Narnains summit

After a few false summits, endless crawling, and numerous stops to admire the surrounding views I reached the last steep craggy section. I knew from previous outings this would be pretty difficult due to fresh snow and no distinct path to follow. 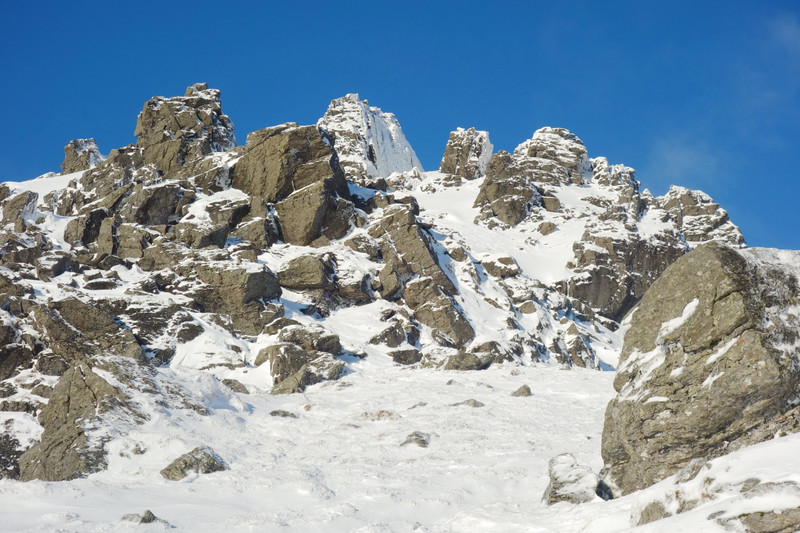 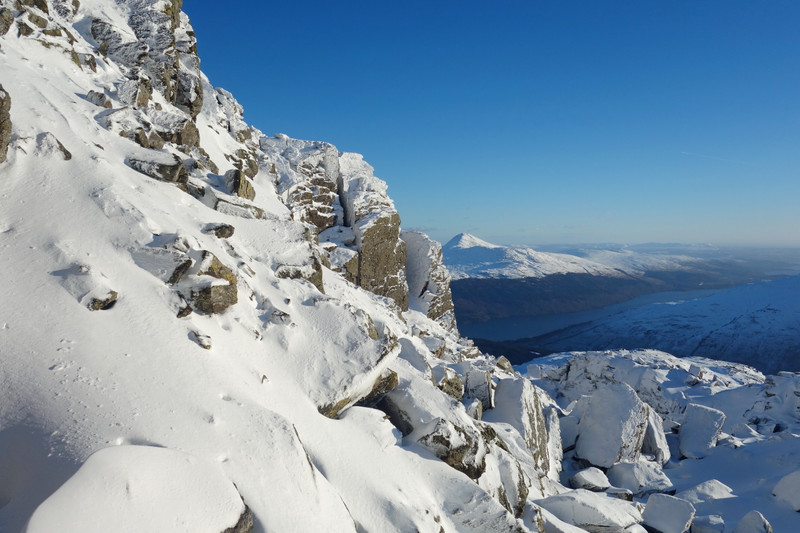 I stuck to the left of the crags and methodically worked my way through them. Twice I turned back due to impassable icy slabs of rocks to navigate a safer route. I eventually followed a crest of crags to reach a slightly steep gully which would take me to the summit

After 4+ hours I reached the summit of Narnain

It was pretty wild on top so I didn't hang about. I'd decided to walk off the usual ascent route which leads down to the popular path to access these mountains. Met two blokes who had done the Cobbler first, they decided to descend my ascent route.

Narnian summit with Beinn Ime in the distance. I got off the summit plateau, dropping down the Northern face slightly, and had a bite to eat. I was starving by now! The wind was still ferocious but I was well wrapped up

In the distance I could see a lone wolf (actually a walker) making there way up to the summit.

Views from my lunch spot. 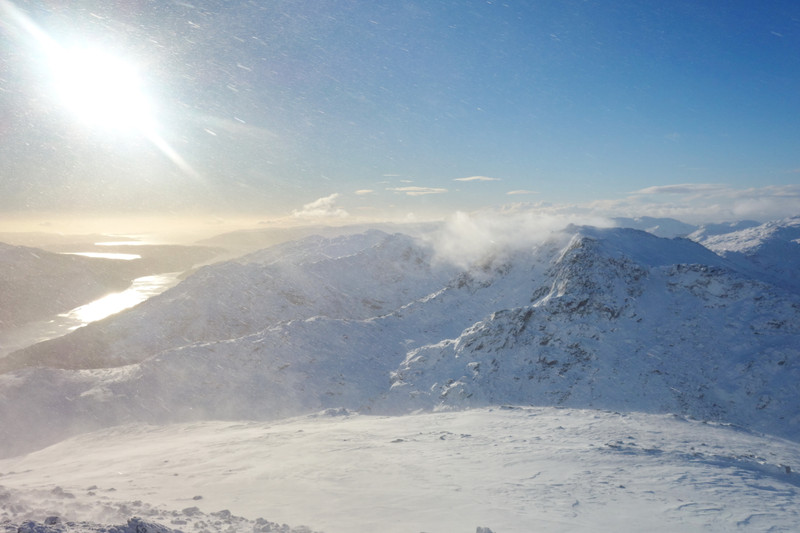 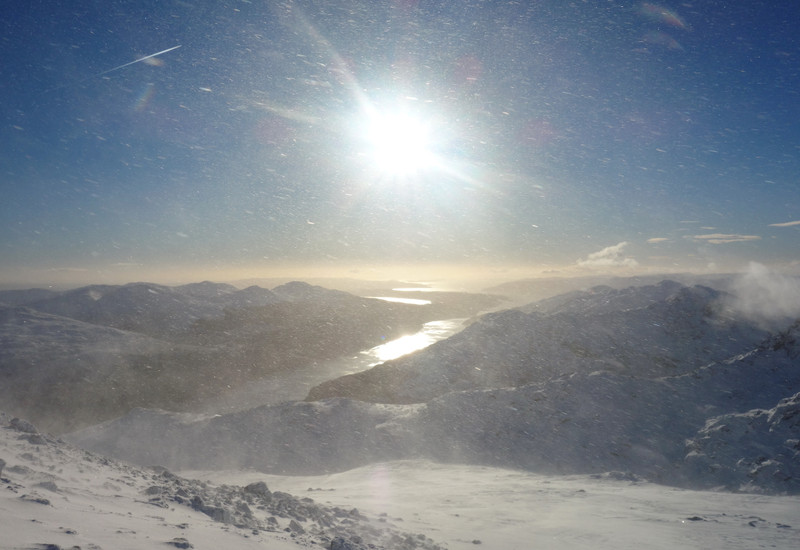 The lone walker soon reached me. A fellow NHS worker (originally from Poland), like me promoting physical exercise to maintain good mental health...saying that she was slightly crazy though

We decided to walk out together and had some good chat. She even took a photo of me 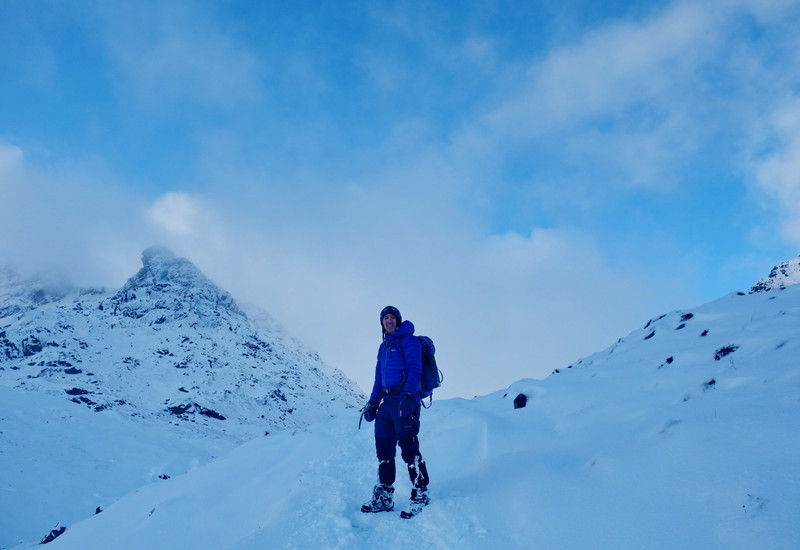 It was a joy to walk out on the good path after my efforts beforehand. Met the two other guys from Narnain summit again, plus another bloke who had done Ime. We had some chat, everyone buzzing on being out on such a beautiful but testing day. . . well depending on route of choice

This was by far the toughest walk I've done in a long time, but I absolutely loved every minute of it. Waist deep soft snow provides a very different physical test to the usual compact stuff, but as I said earlier its good to challenge ourselves from time to time

. Looking forward to more of the white stuff and more mini adventures

Well it looks good at least

I prefer to avoid this sort of knee-deep wading stuff, but it does happen from time to time - not easy!

Good to see you out and about again

God, I don't know how you do it! I was beaten in snow like that on Friday on Lui. Brilliant photos. Knackered reading that, though, so going for a lie down...

I did The Cobbler (up the ridge route, not valley route) and Narnain today (coming down off Narnain the way you went up). Almost no snow left anywhere - just a few pockets in dips and shaded spots). Unrecognisable to what you encountered 6 days ago! The rapid snow/thaw on Scottish hills is remarkable.

I have to admit to finding the description of how strenuous you found the walk quite reassuring. I was on the Loch Earn hills on that day, and had attributed my painfully slow progress to my passing retirement age! If the legendary Dooterbang found it tough, then I feel I'm allowed to also

But: clear, freezing, sunny - brilliant! Seems we had similar experiences.

Ben Vane was pretty fine on the Saturday also, but again took ages...

Good to see you in authorial mode again...