To take someone up a Munro who had never climbed a hill before hand, is always mixed with risks especially if you are a hill walker and want the other person to enjoy the experience. The weather would have to be perfect (or so I thought) and an impressive Munro to look at would also help. The plan had been Schiehallion and Sunday had looked all so promising on Wednesday when I checked 3 different weather reports.
As usual

this changed by Thursday and on Saturday morning an overcast day with 30% cloud free Munros was on the forecast. I was annoyed, as by that time I was more than desperate to get up a hill again. Should we just forget Sunday and do a hill walk on Saturday instead?

Saturday was just as damp and driech as the forecast was looking for Sunday. Looking at other things to do, neither of us could be motivated to do anything else low level either. Schiehallion was out of the question, as I had still hope that the weather forecast would change for Sunday (you never know), but should I take someone who had never climbed a hill before out on a rainy day, with snow on the forecast in what looked like 0 chance of a cloud free Munros?

It would either be the last hill he would ever climb, or he might just enjoy the whole experience. I lay down the facts, but Kevin was convinced that he would not mind at all.

Looking to do something easy I remembered Meall Chuaich. It was a hill I had climbed a few years ago (also in the clag) and it had been such an uneventful day that the hill never received a trip report.

A strange decision you might think, but it was the closest one to our location and also the easiest.
An hour after the decision was made, we parked on the lay by next to the A9. Setting out I had to laugh. Had my plan not been to climb all my favorite hills after my completion?

Walking along the large land rover track the light rain and drizzle did not dim our spirit. 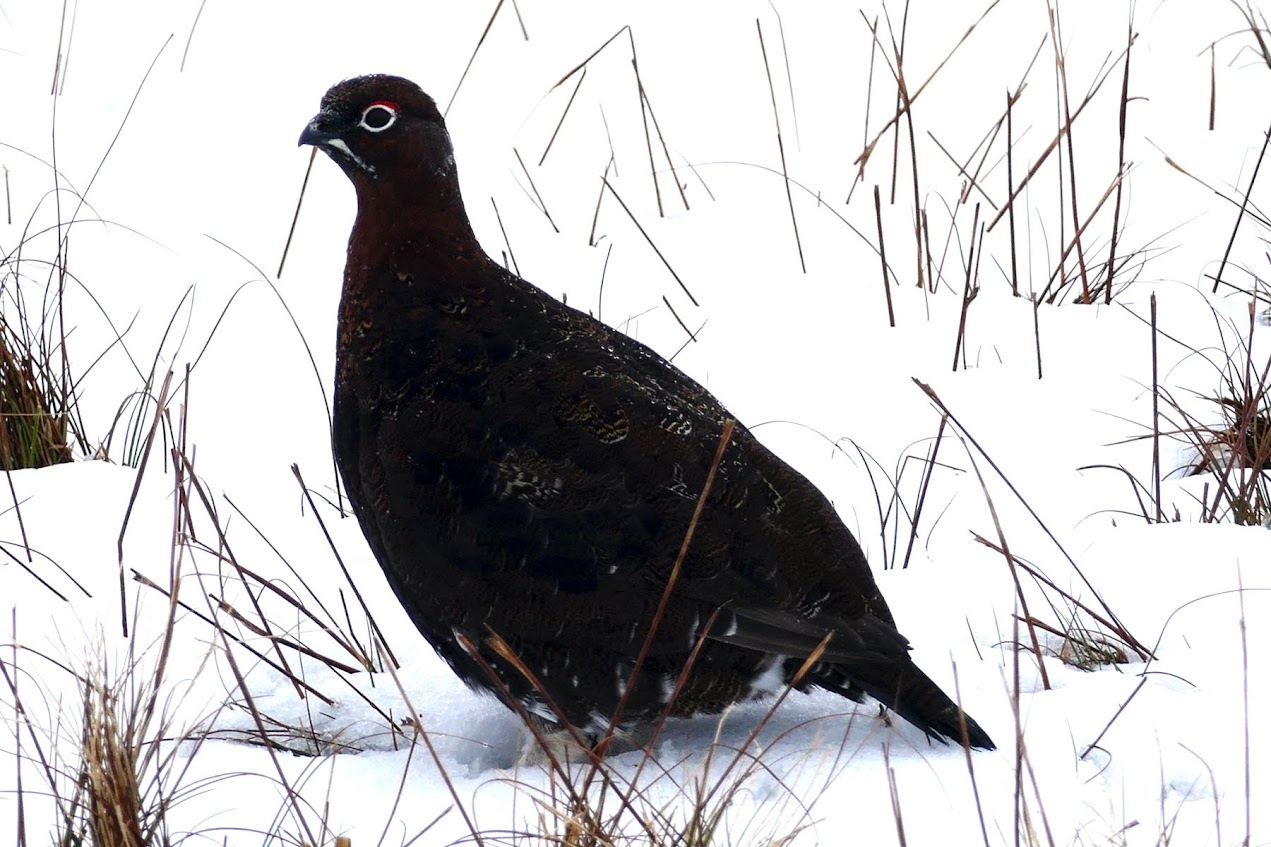 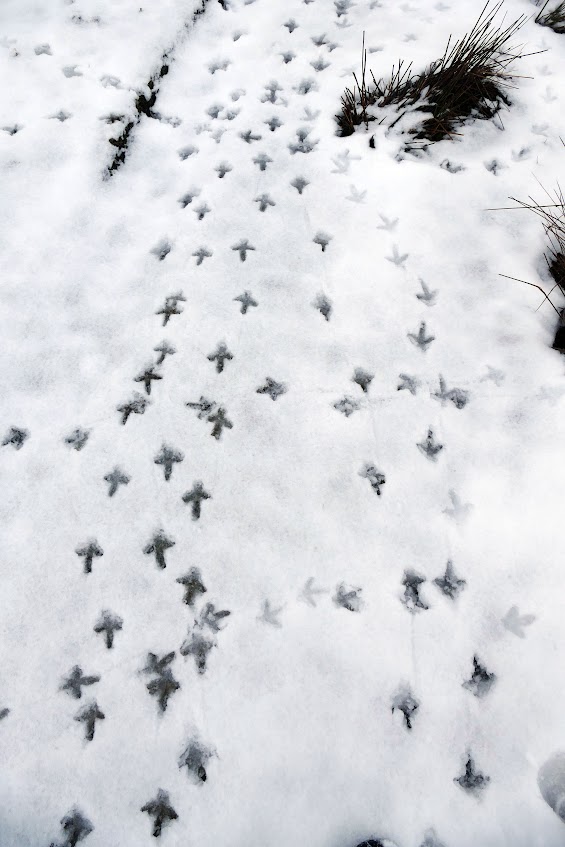 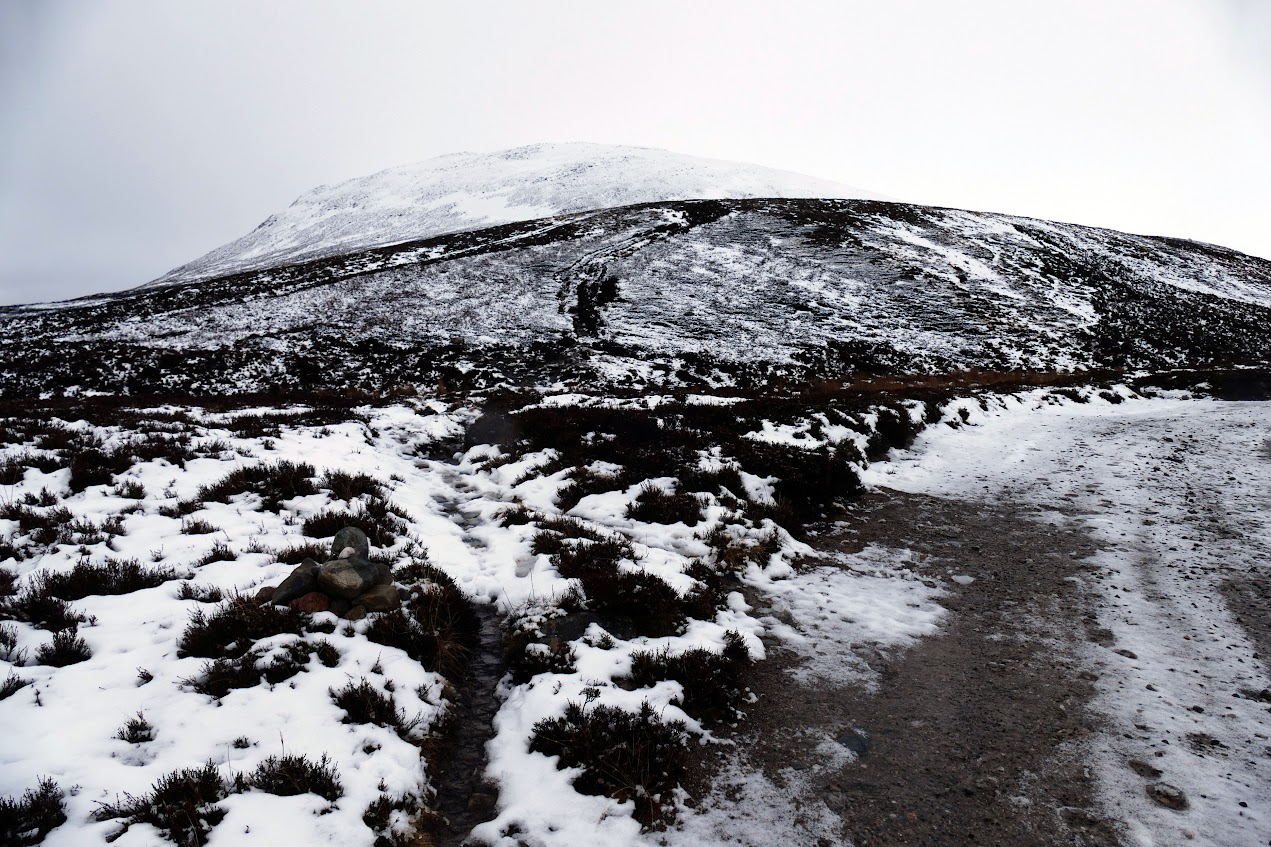 The wee cairn which will show you the way up

‘Say good bye to your clean boots’, I told Kevin and we climbed on through a layer of soft snow mixed with bog. The path soon disappeared under a layer of snow and turned everything into a white nothingness. Time to take a compass reading. 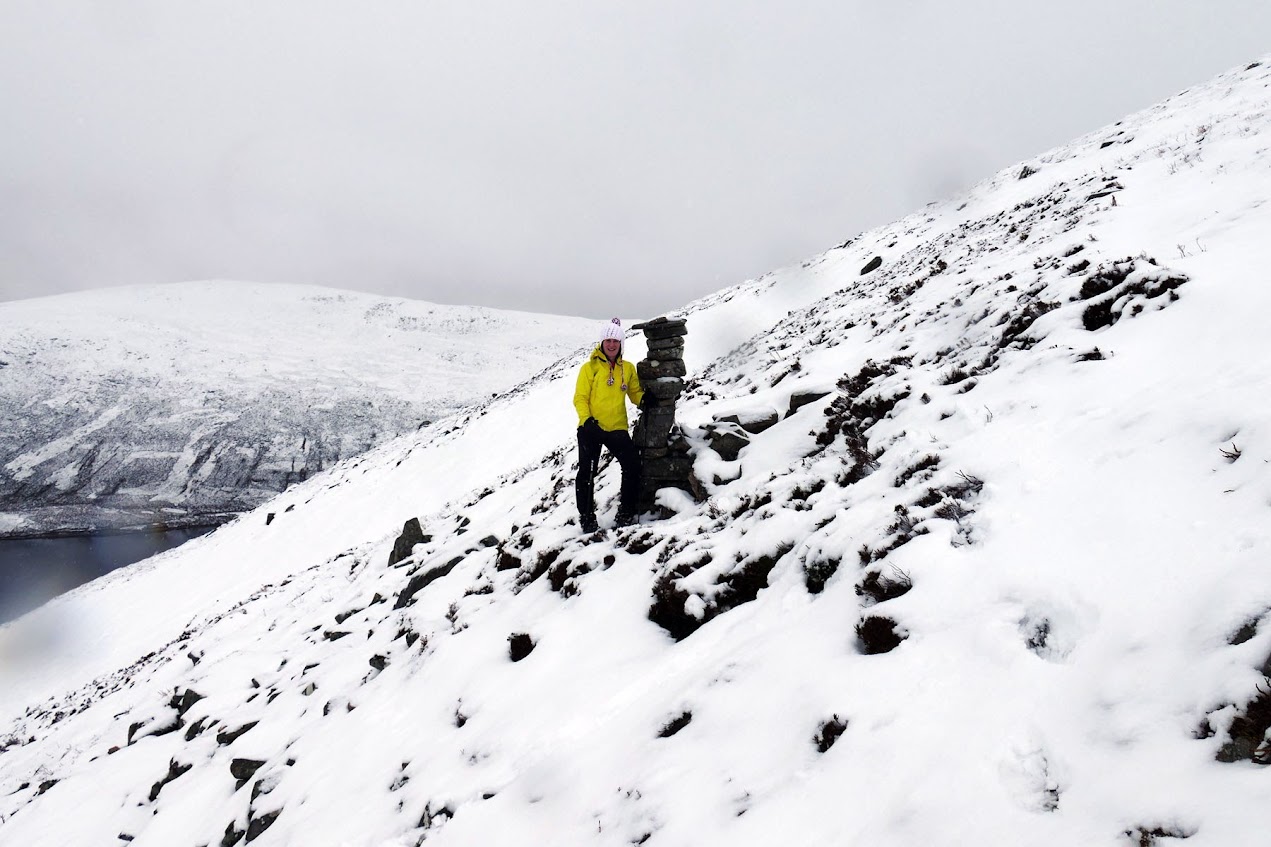 me on the way up, checking out the thing which looked like a person from the ground 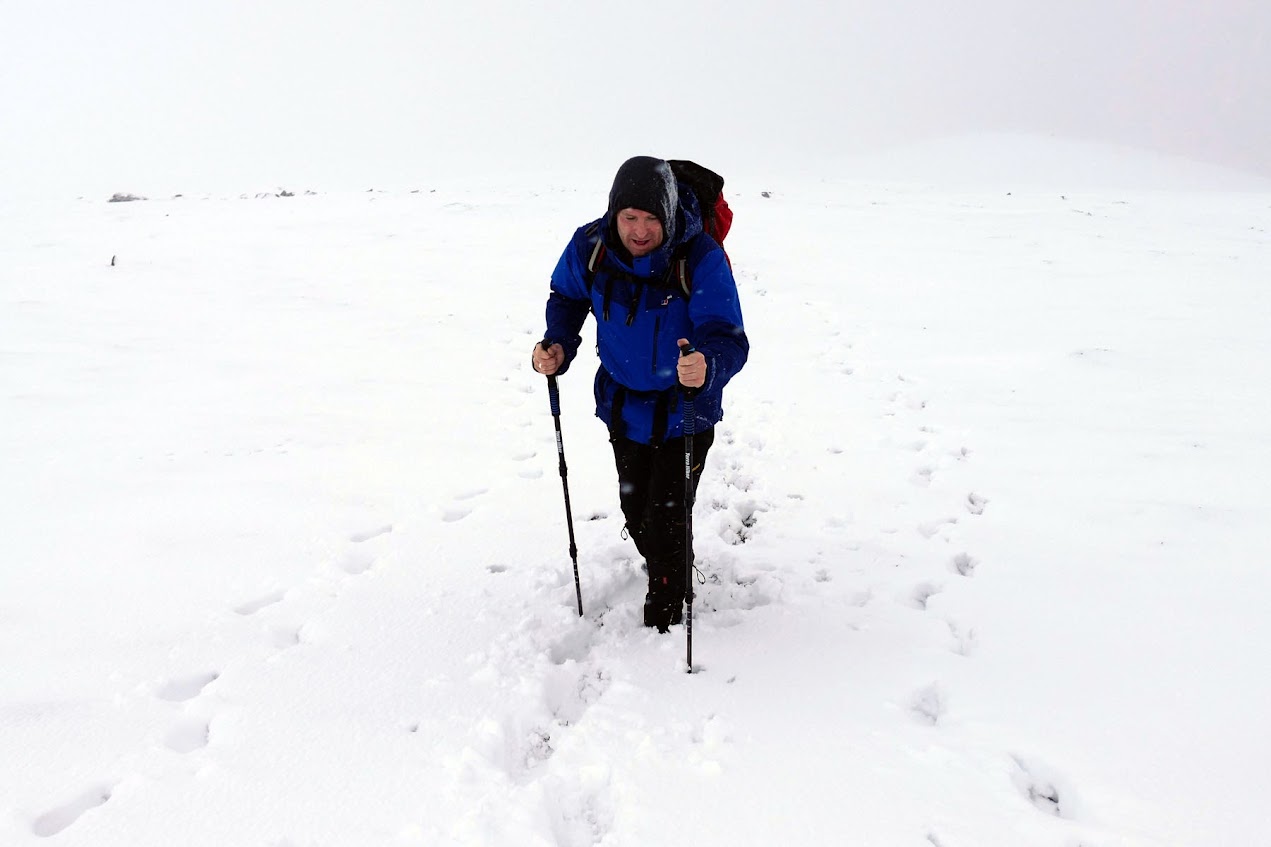 Kevin battering through the snow

The footsteps we had followed had disappeared under a layer of new show and the horizon and snowy ground stated to blend into one. I always loved the experience and apart from feeling uncomfortable, Kevin was in great spirit. The bleakness of the mountainside around us was spectacular and leading the way by the basic rule of…if it is up it is right,

I managed to find the cairn without any detours which impressed Kevin, who had become a bit doubtful towards the end when conditions had been close to a whiteout. 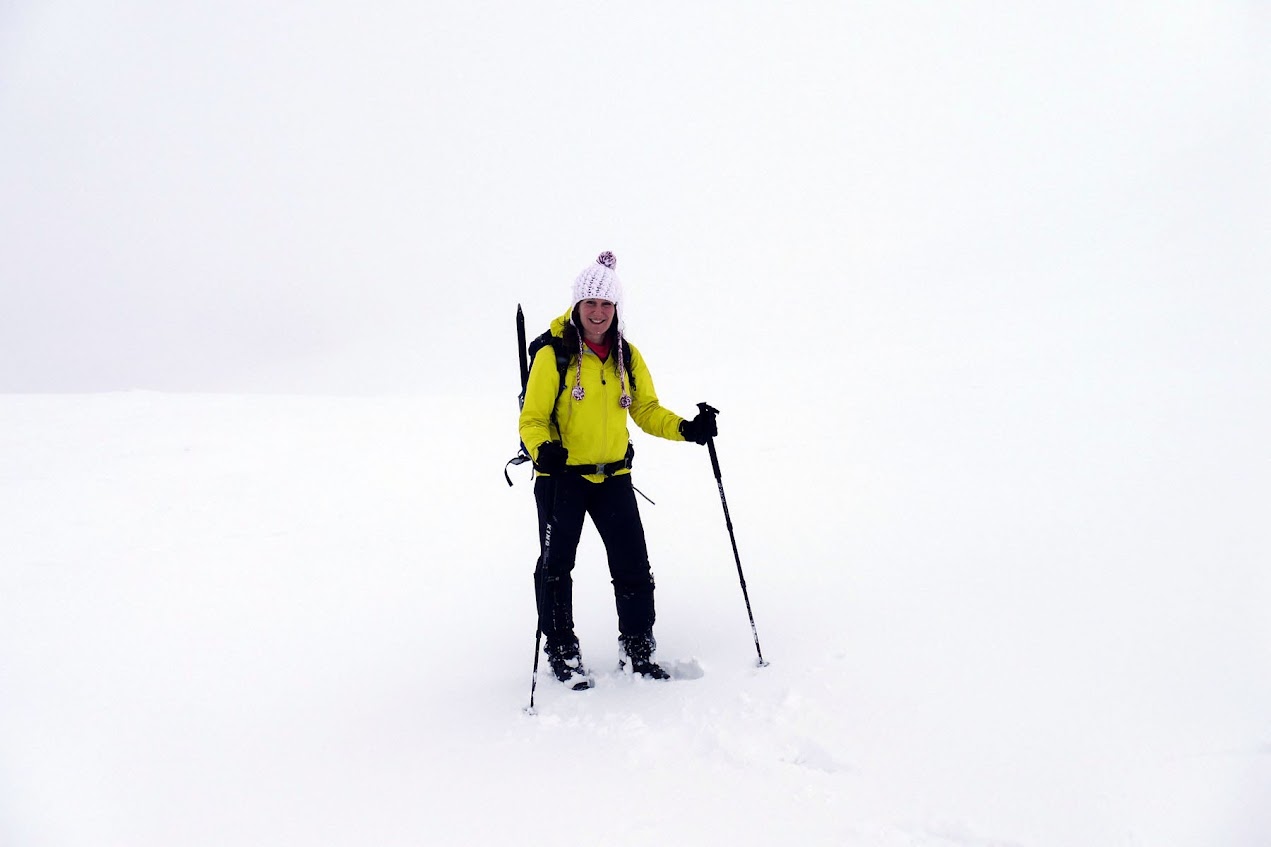 Myself happy to be up a hill again 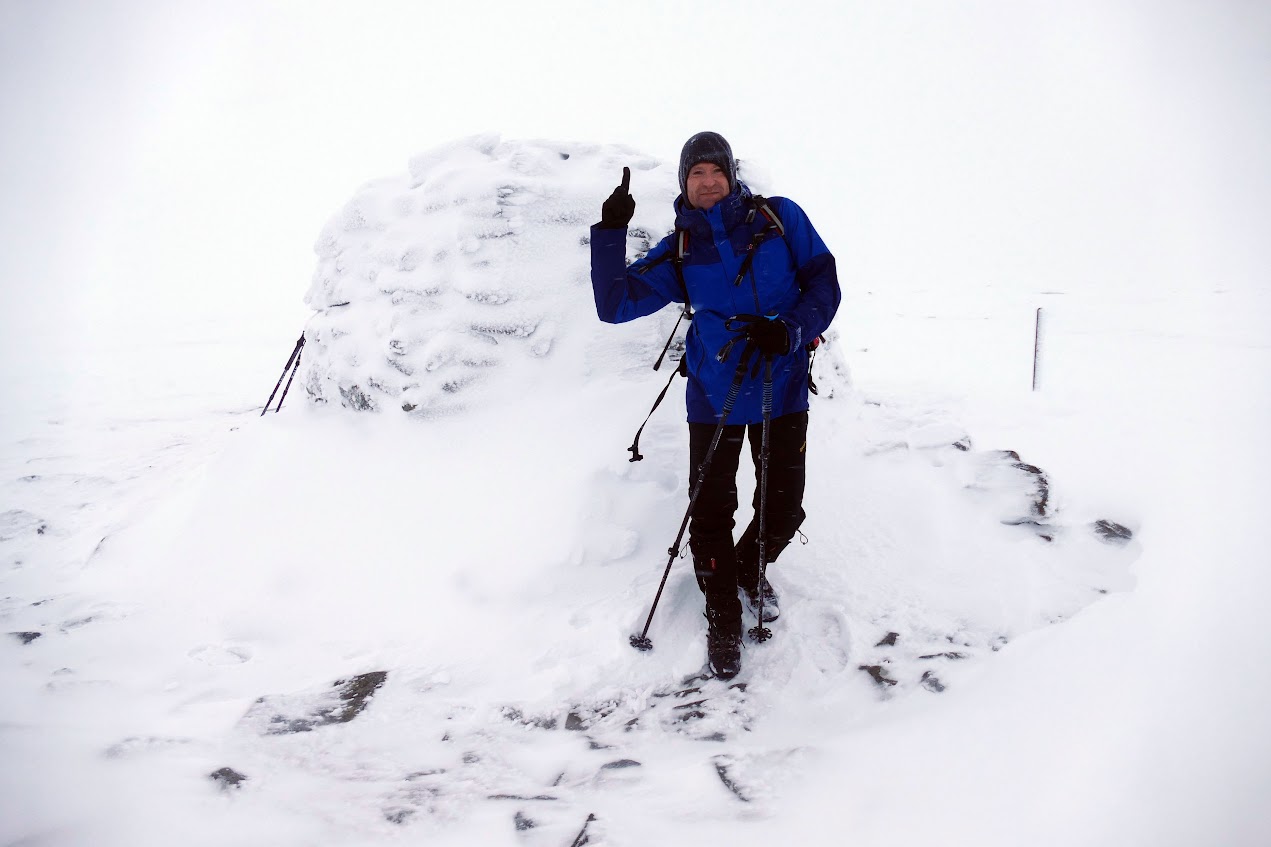 Munro No 1 for Kevin

When we reached the cairn , I was not sure who was more proud when Kevin touched his first Munro cairn.

A couple of minutes after reaching the summit Kevin (as mental as myself) decided it was a great day for a ‘taps off’ photo.

Laughing I snapped away and in the -5C temperature at the summit.
Needless to say I had to do the exact same once he was back in his jacket and had to laugh…just as well no one had arrived after us...and I shall spare you the photos.

Sitting down we had some snacks until it was time to head down the hill. Even though we had only been 20 min or so our footsteps had completely disappeared below a new layer of snow. Checking my compass, for the directions I had taken earlier, we set off in a complete whiteout until further down we finally were able to see our surroundings again. The sun had set when we reached the foot of the mountain and in the approaching darkness with the beam of my head torch, we walked back to the car. 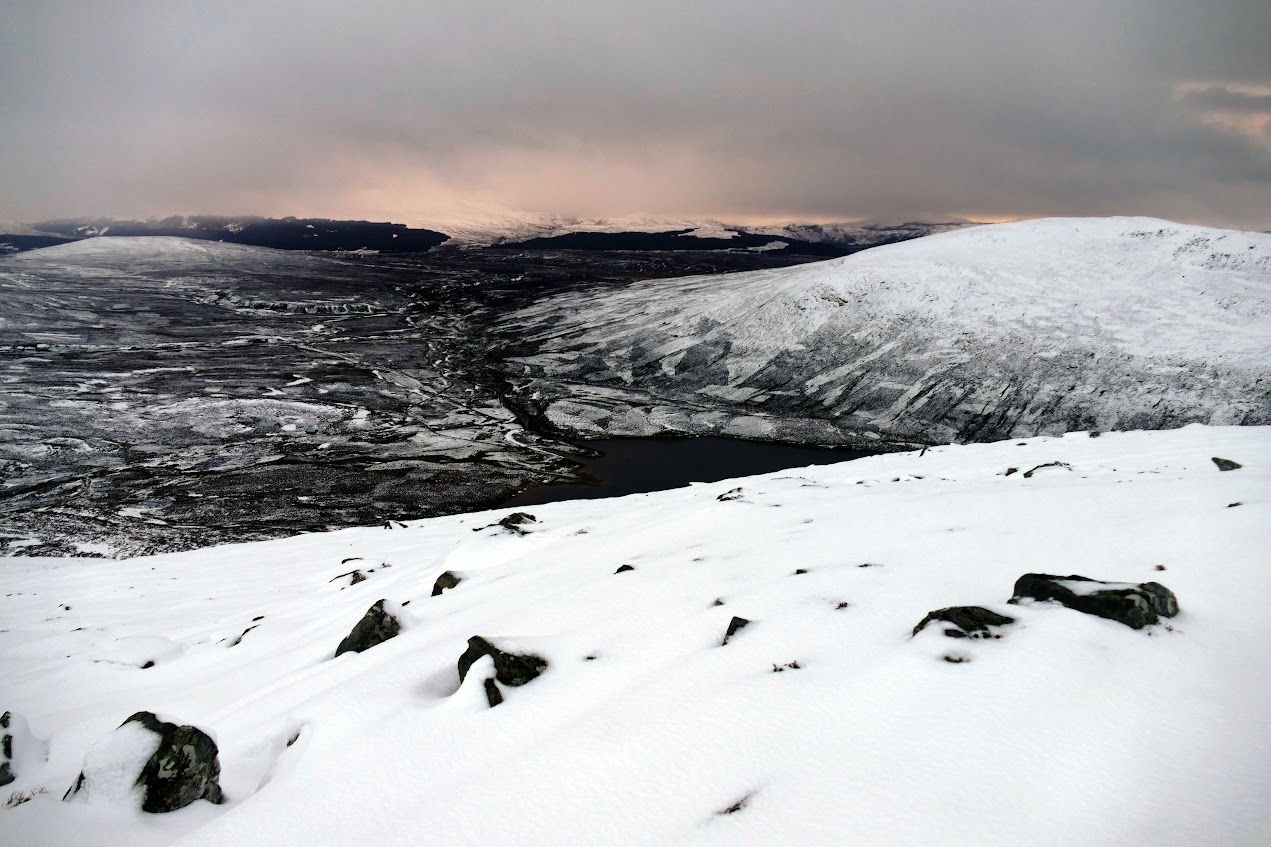 Sunset in the distance

, but Kevin had enjoyed himself tremendously and was keen for another hill walk.

What a difference a day can make! Walking up to blue skies and sunshine, meant that the weather forecast which followed Wednesday had been completely wrong!

Bouncing to the prospect of walking up a hill in the sunshine, I thought back to the first time I had climbed Schiehallion (I think it was my fifth Munro) about 12 year ago. It had been a grey miserable day and back then, I had hated the false summits and bouldery ground and had proclaimed it as my least favorite Munro. Years later when I started to climb Munros, I certainly had encountered worse, but Schiehallion had always stuck on my mind as a bad one. 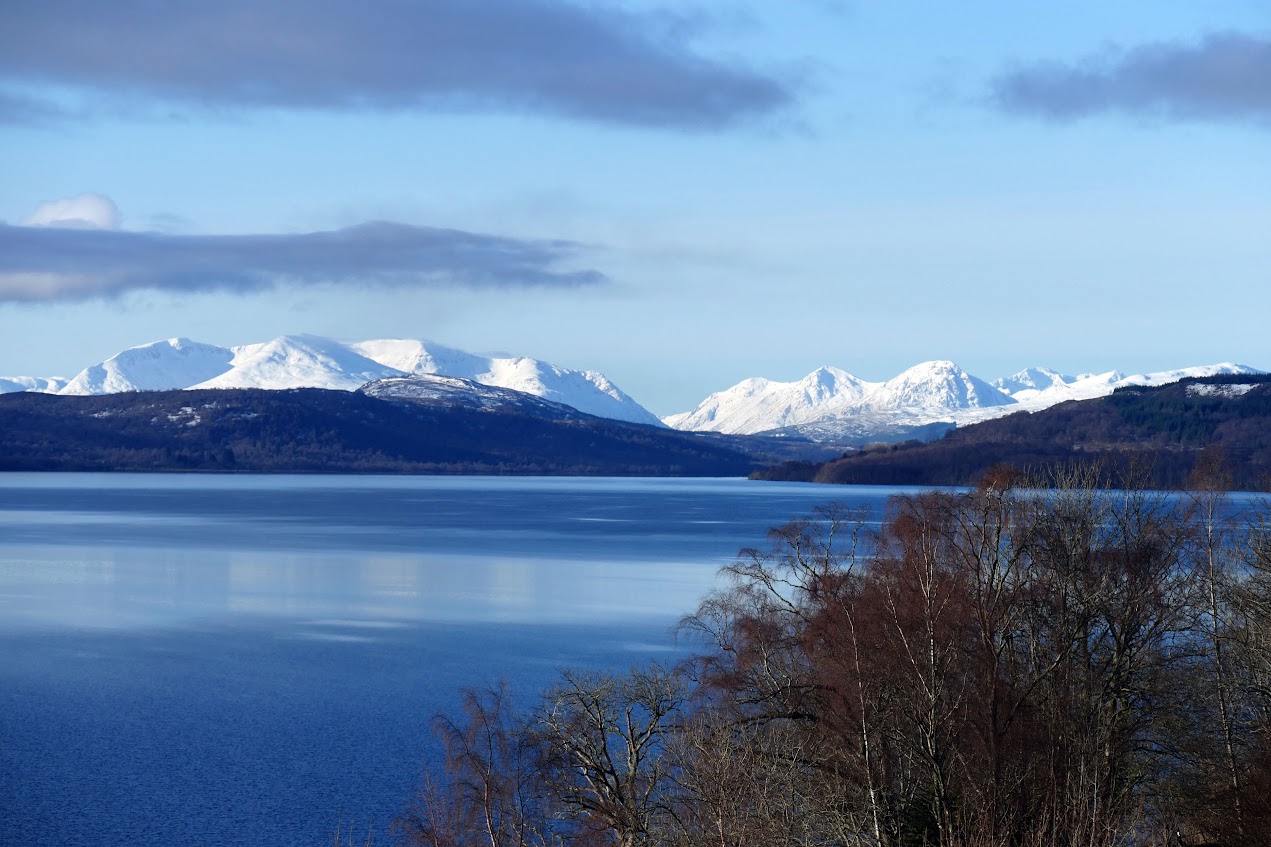 What a difference a day can make. Views over Loch Rannoch 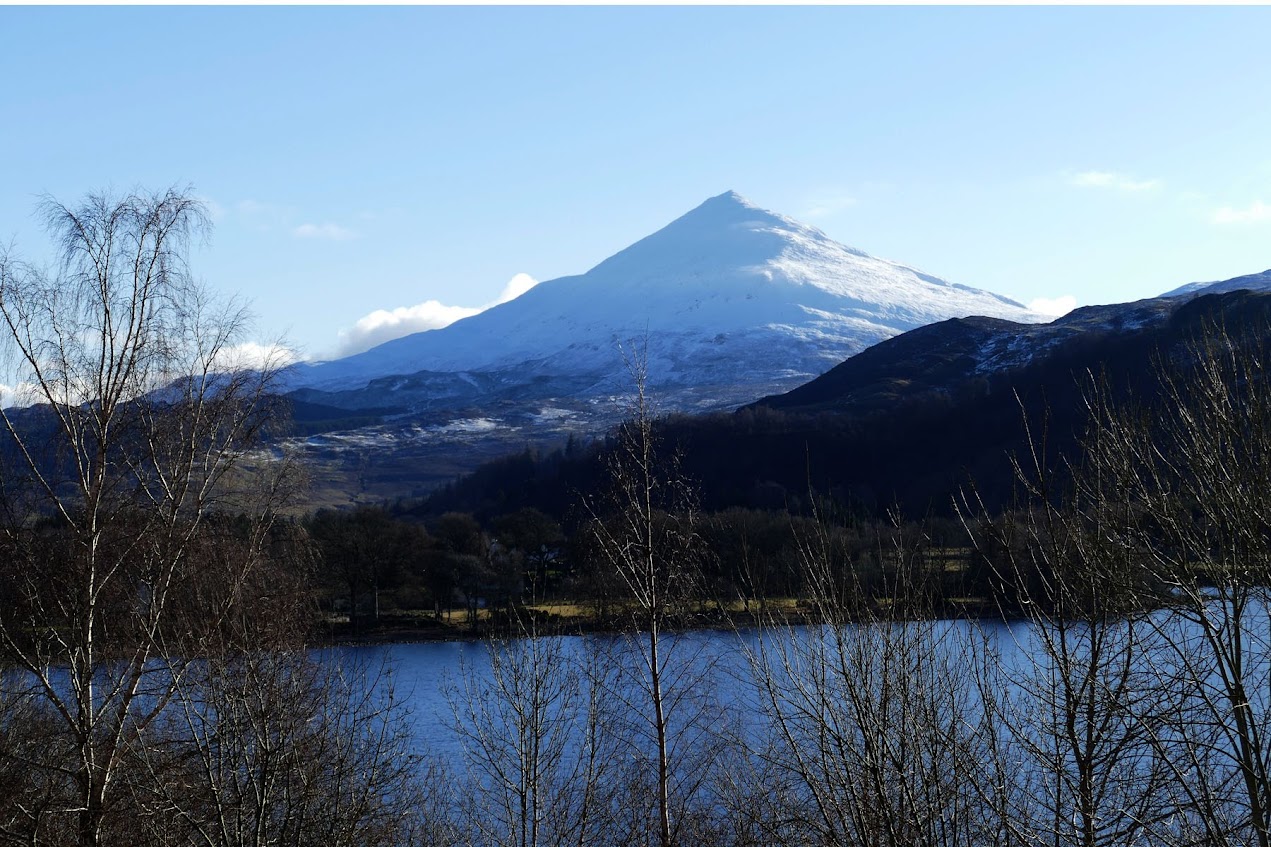 Schiehallion across the loch

When we set off from the car park and walked up the great path, I simply could not understand how I could have ever hated the Munro. This was great! On the way up we met two other walkers and one was one of my previous neighbors from 15 years ago. Funny where you end up meeting again!
Saying good bye after a lengthy chat, we continued up through the thick layer of snow. It was pretty hard work at places, but the views around Schiehallion got better and better. 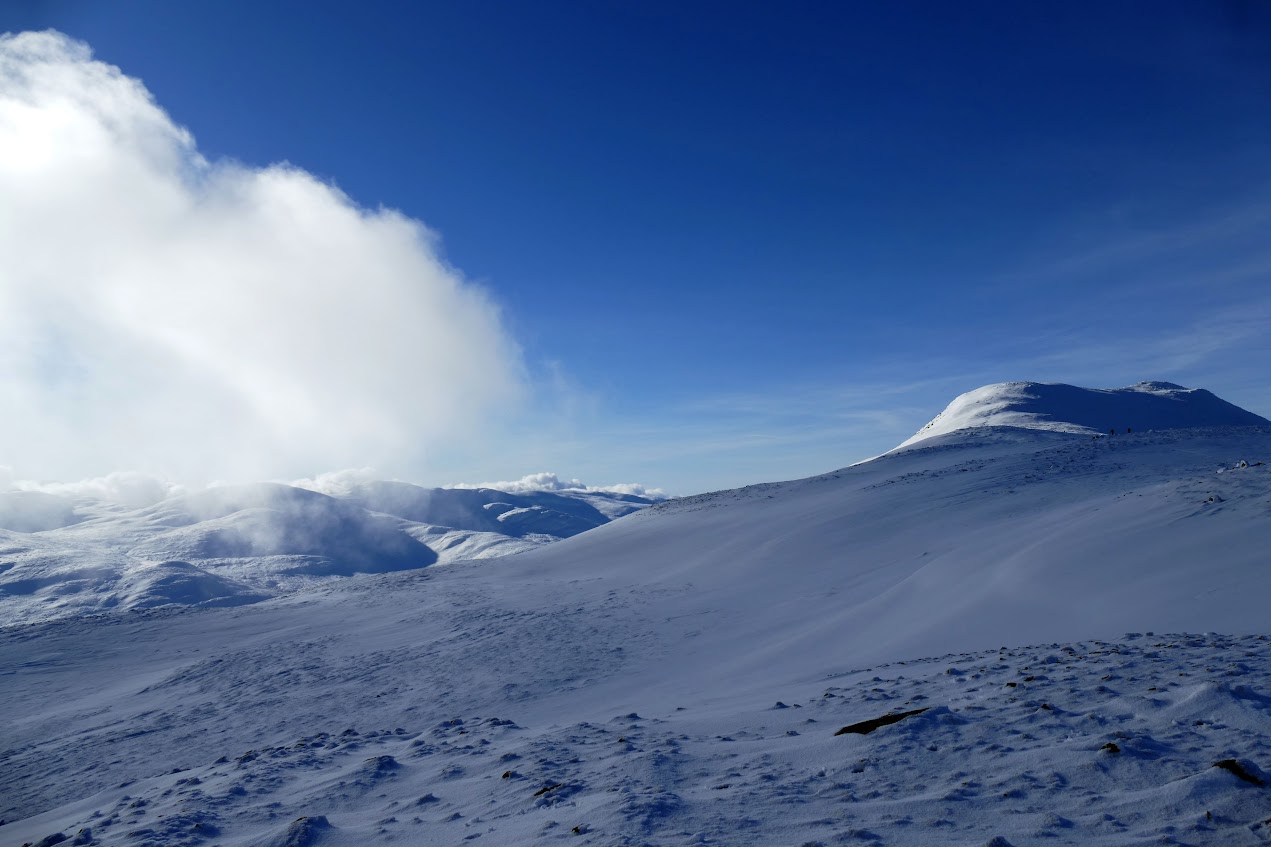 The view up Schiehallion 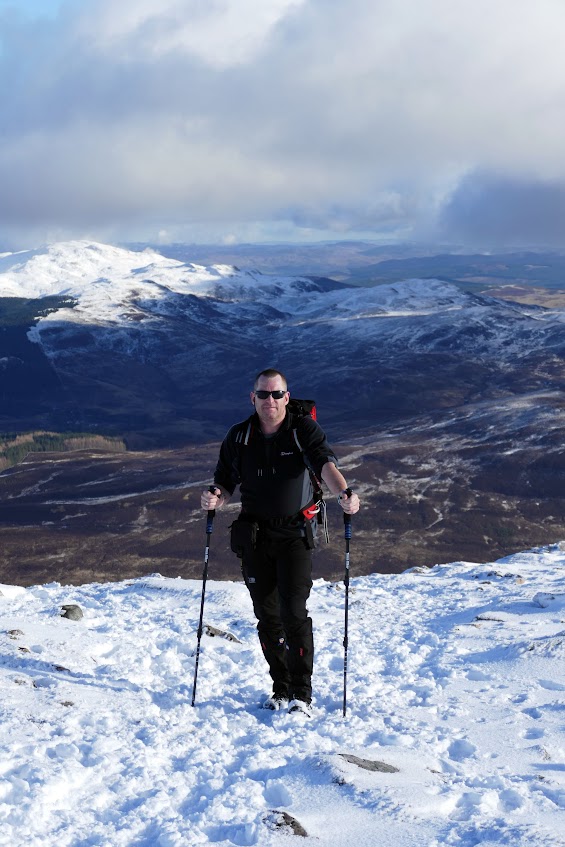 Kevin in the conditions I had hoped for

We reached the summit without any difficulty and were rewarded with an invasion above Loch Rannoch and broken spectres and simply magnificent views. From being my least favorite Schiehallion merged into one of my top 10 during the day 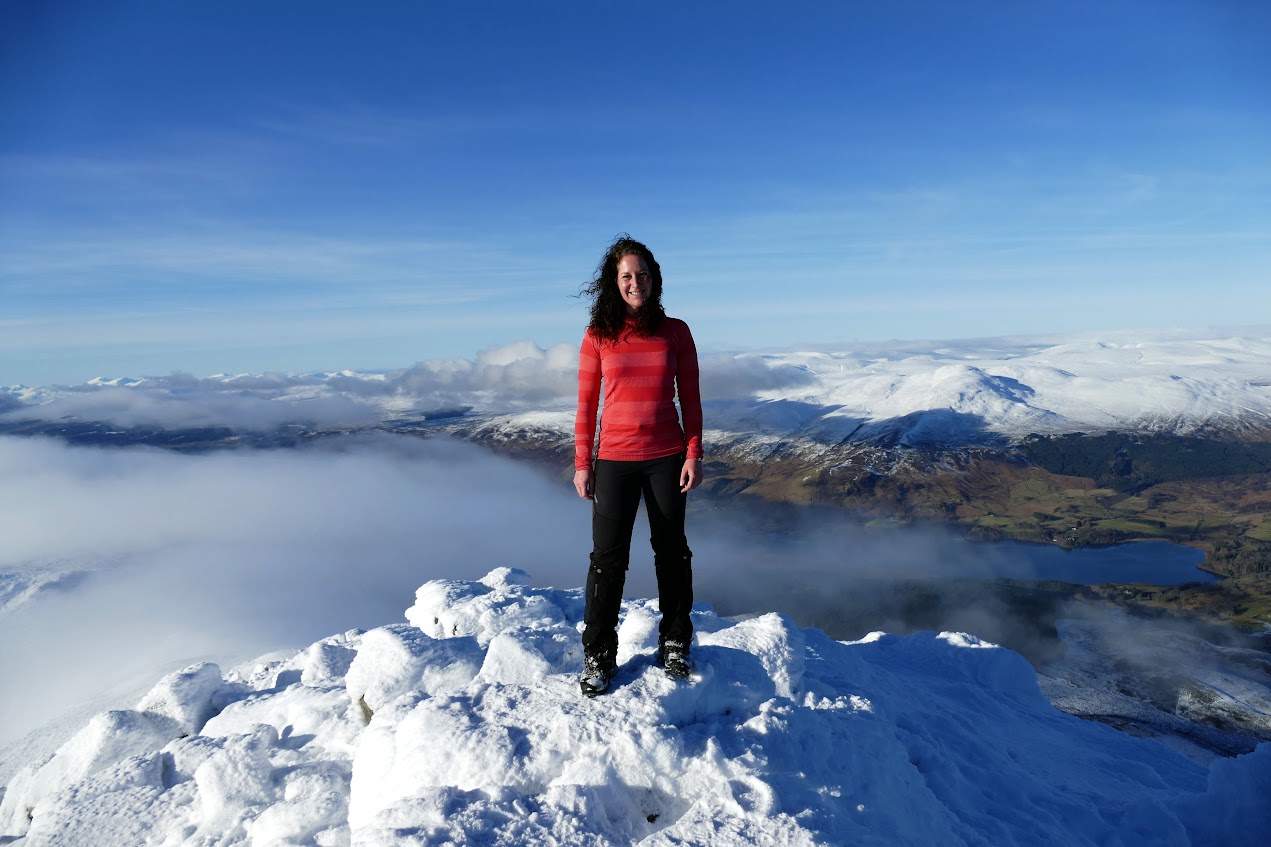 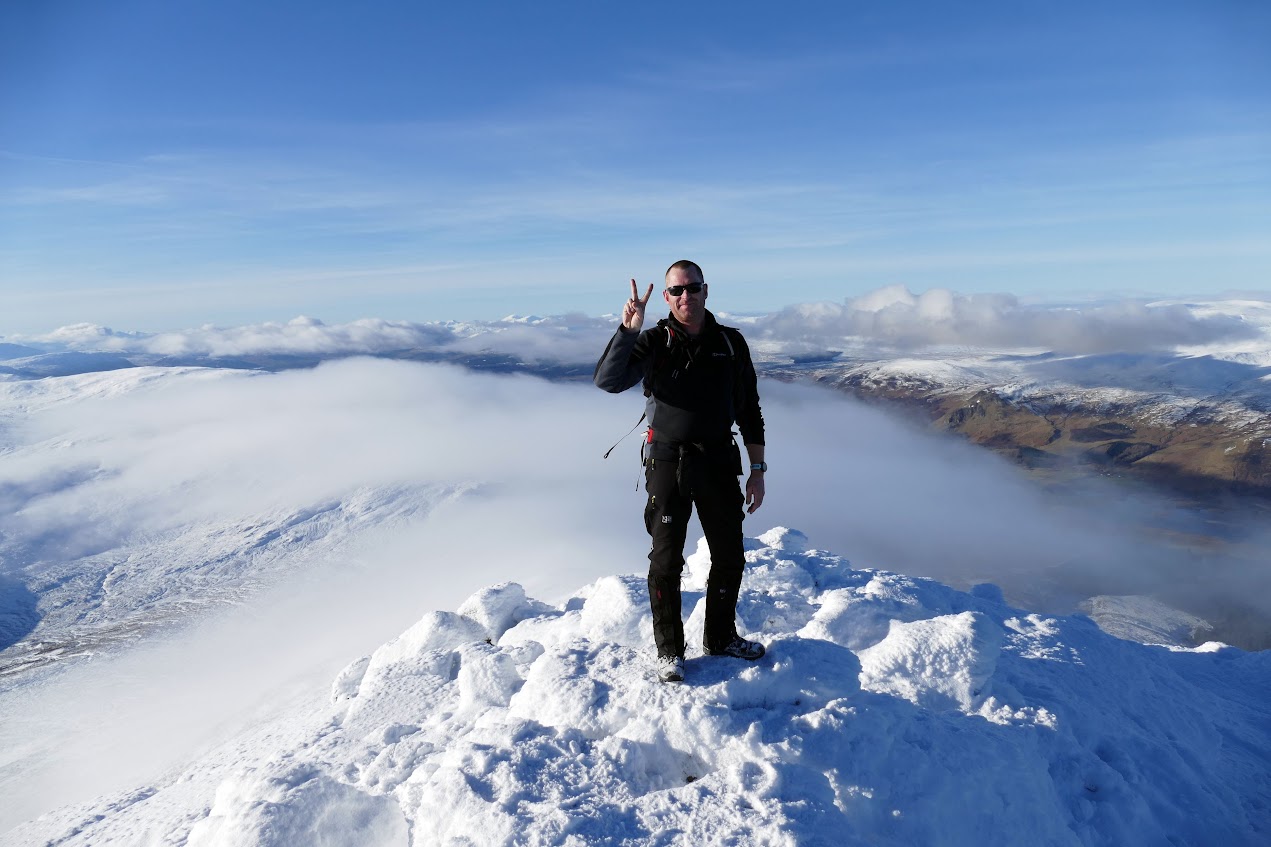 We stayed for ages and watched a couple who were in the process of getting ready to ski and snowboard of the mountain, while their dog encouraged us to throw a cork it had found (maybe from a previous completion party) across the mountain top. 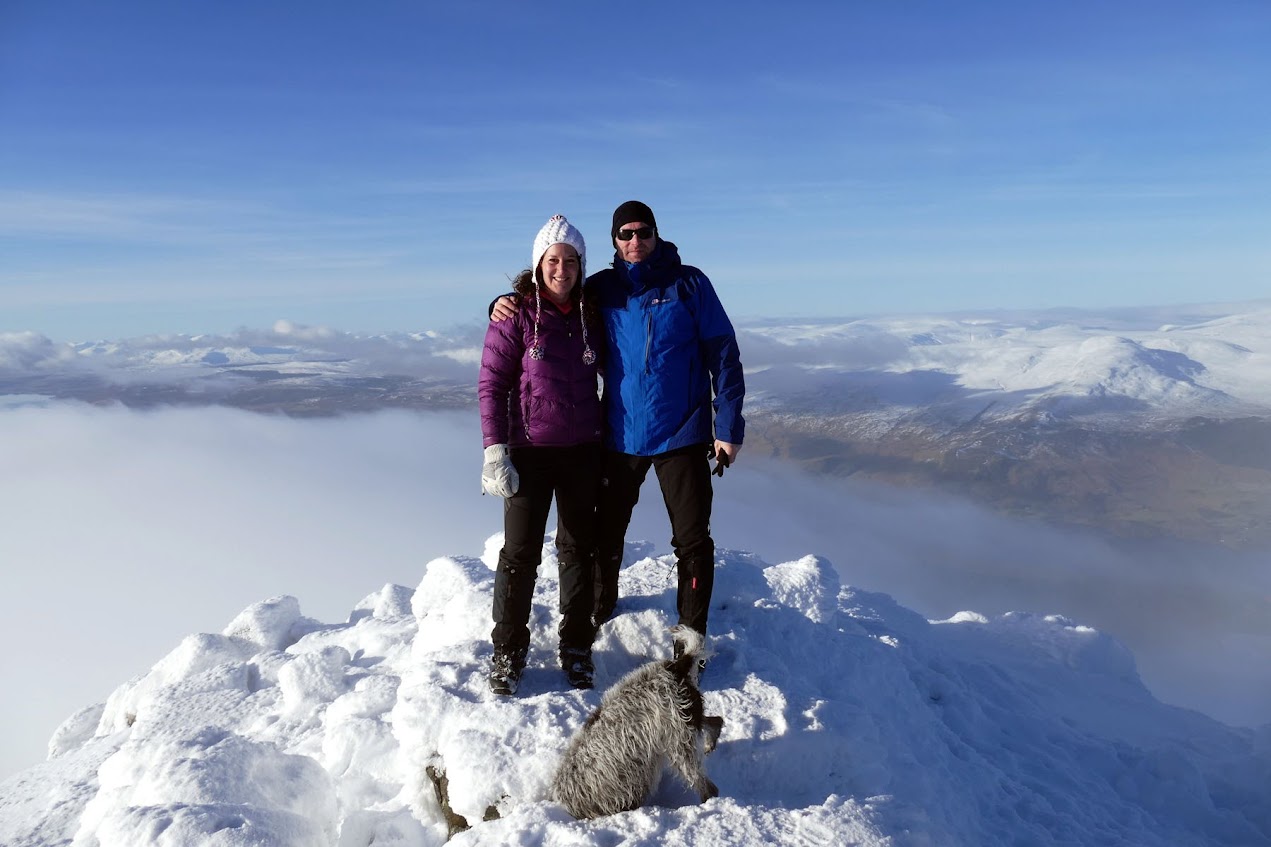 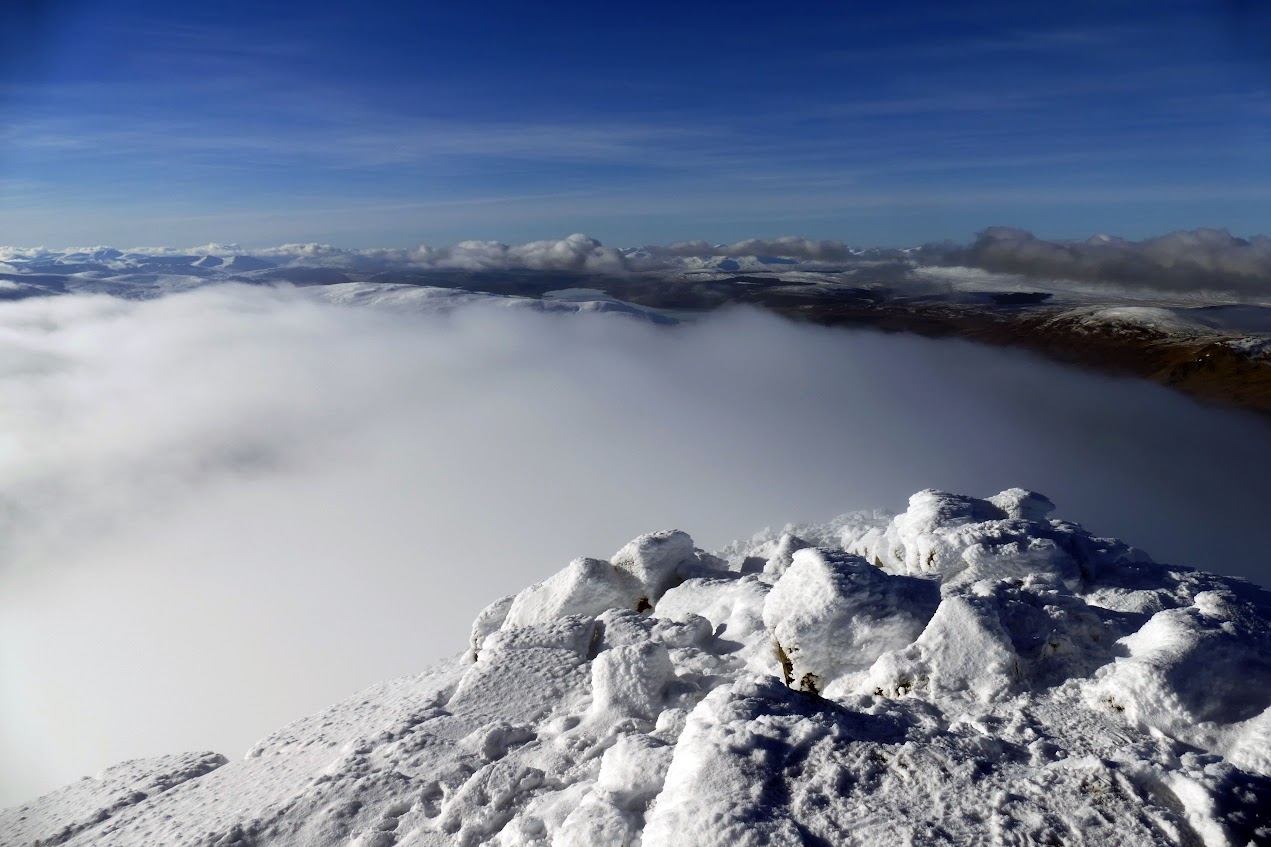 Once the cloud has moved again 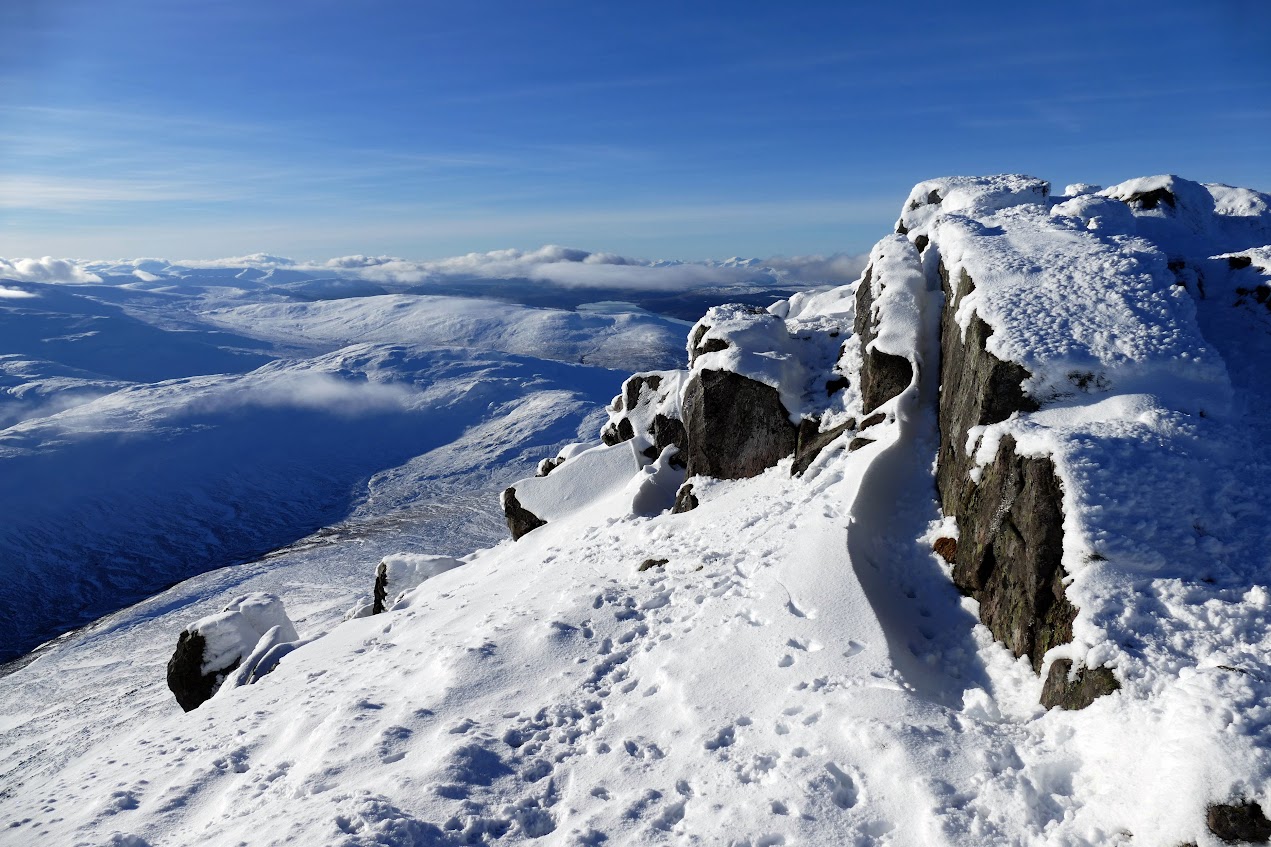 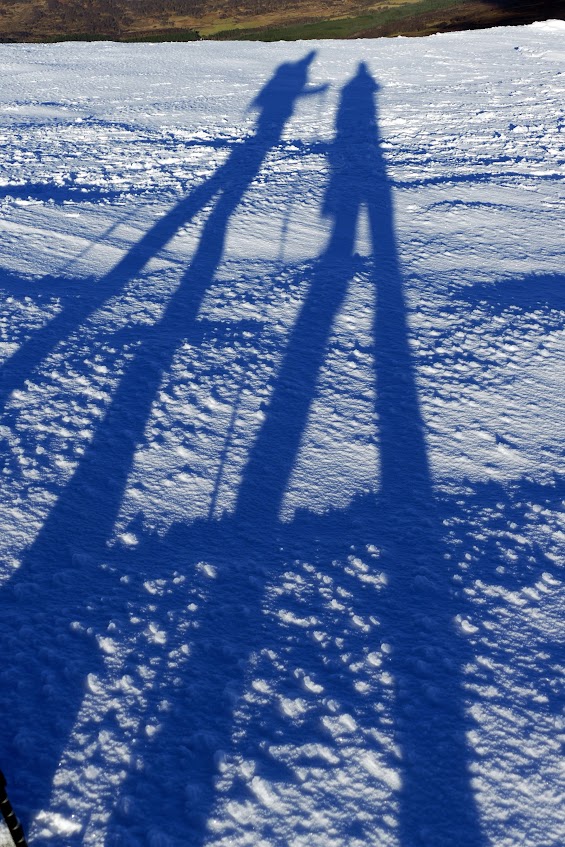 When it was time to leave, we had to drag us away, but the journey home was laying ahead. When we were back in the car, Kevin beamed (not yet knowing about red and blue balls on Walkhighlands) and was happy to have climbed his first two hills in some rather different days and was already planning our next Munro. Mission to ‘create a new hill walker’ accomplished.

We can probably do without an 'invasion', but the inversion looked good. Lovely report!

Brilliant stuff Mountainlove and welcome to the gang Kevin, it looks like you thoroughly enjoyed your baptism of hill walking!

Taps aff eh? I know a friend or two who have bared a lot more on bigger hills further north, I'm impressed that you both did it!! So I take it Kevin is now registered here and has turned a couple of red baloons blue to match the skin bearing?!

That's great that you got a mixed experience on both days, nae view then stunning views, good experience for future walks. Glen Coe across Loch Rannoch and Schiehallion looked stunning on day two although it took a while for me to realise that was a dogs bum in the air for your summit shot hahaha, at first I thought it was a monkey then some form of furry headwear!!!

There is always something very satisfying about introducing somebody to the wonders of the hills, or the outdoors in general. It reminds you of the sheer joy of the first discovery of these wonderful places.

never my favourite either with the bouldery final bit but I now realise I've never had the views..always misty

Yep - what a brilliant feeling when you are with someone doing their first Munro!

I too have miserable memories of Schiehallion - deep snow, windy, and all in thick cloud, I could have been up any hill for all I could see! Pretty sure if that had been my first experience of a hill, I'd never have gone up another

From those great pics, I definitely need to go back and see what I was missing!