Back in November I agreed to take on some lecturing at a local university this semester, which has pinned me in Sussex every Friday afternoon. So escapes to hills are at a real premium. Last weekend (i.e. 17-18) was half-term, so I bounded over to Wales to visit the ex, with high hopes of Cadair Idris on the Sunday.

But the cloud descended, too much to make it worthwhile for my hopes of views. So apart from a pleasant wander round Dinas Head on the Pembrokeshire Coast (where I really enjoyed a colony of noisy guillemots on their shoreside rock), no dramatic mountain-scapes for me.

No dramas at all, in fact, because I was on Dinas Head when Wales had its little earthquake, but didn't feel a thing. The earth didn't move. Not for me, nor for my ex.

So, last Friday, in desperation and with a forecast of sunshine, fine views and winds not so strong that I wouldn't cope, I drove up to Stratford after my uni stint. Then on Saturday morning, I drove up to Seathwaite for a Coniston Fells circuit. My sack packed with - probably unnecessary - crampons, warm layers, coffee, water food and ooh, so much more, and my winter boots on again (La Sportiva), off I went. 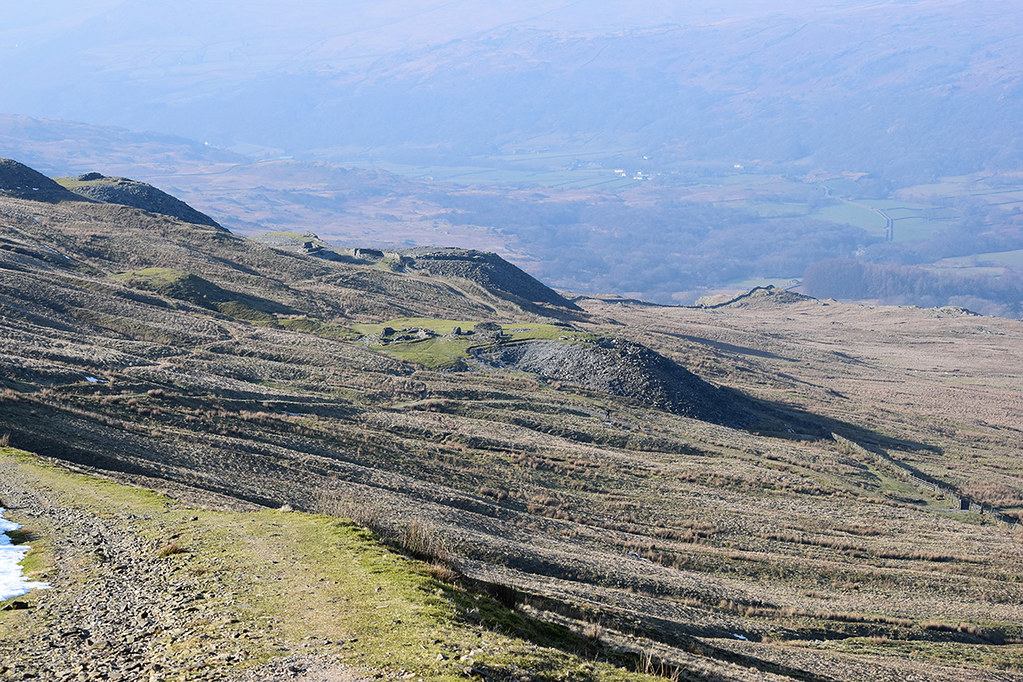 Mines on the Walna Scar 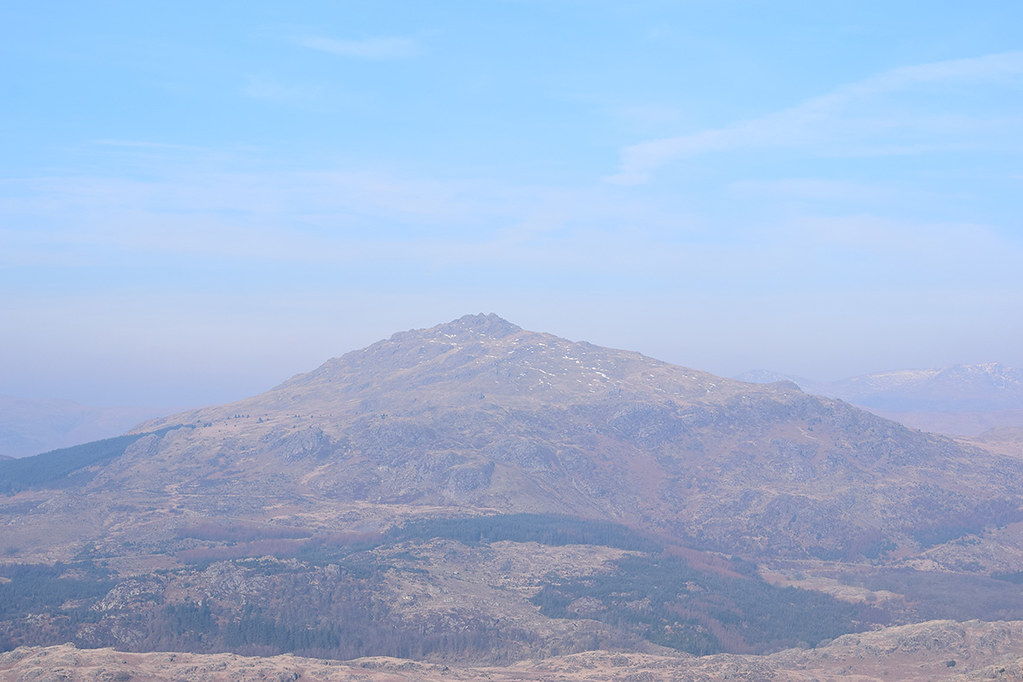 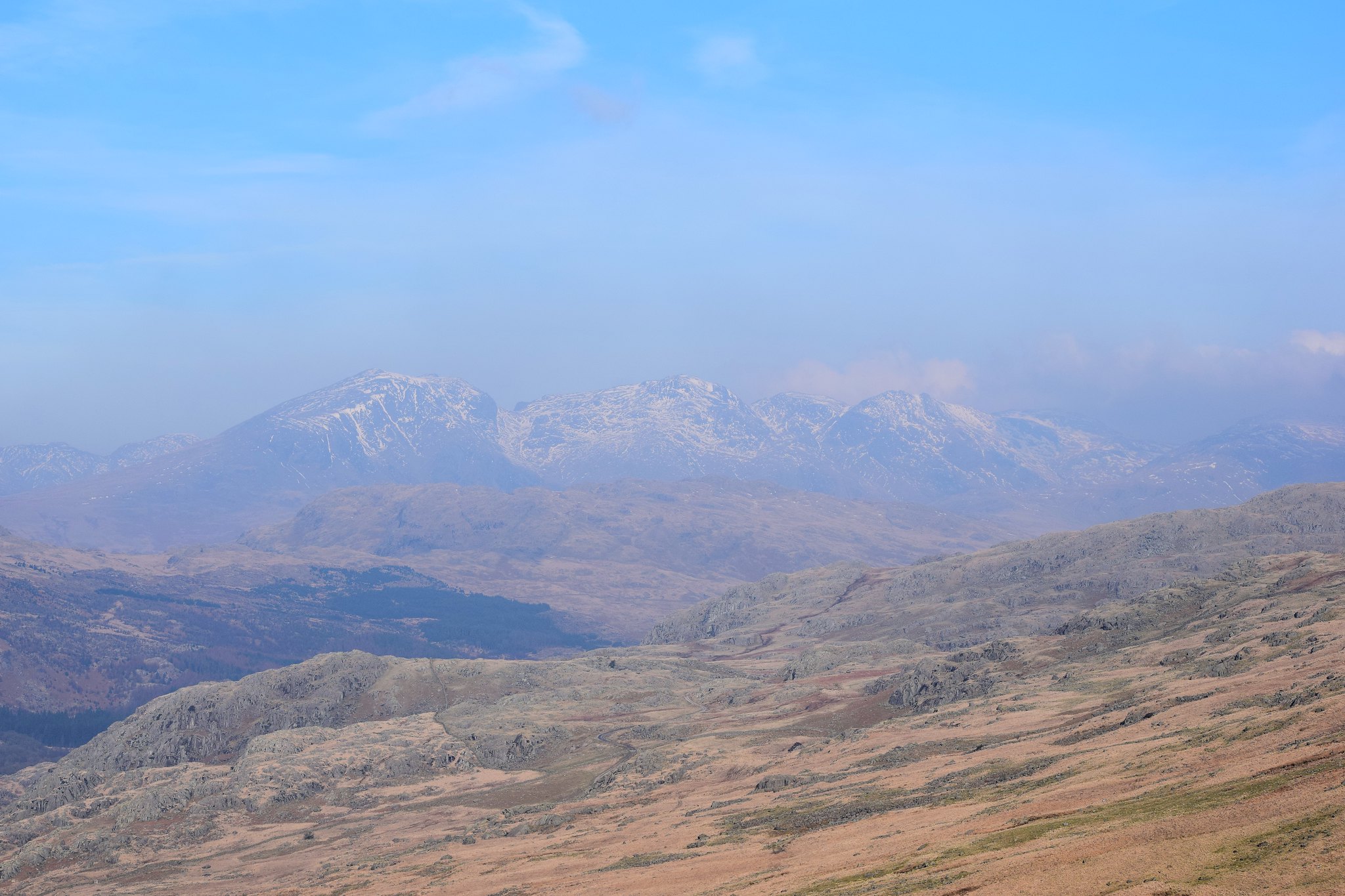 Scafell range in the morning haze 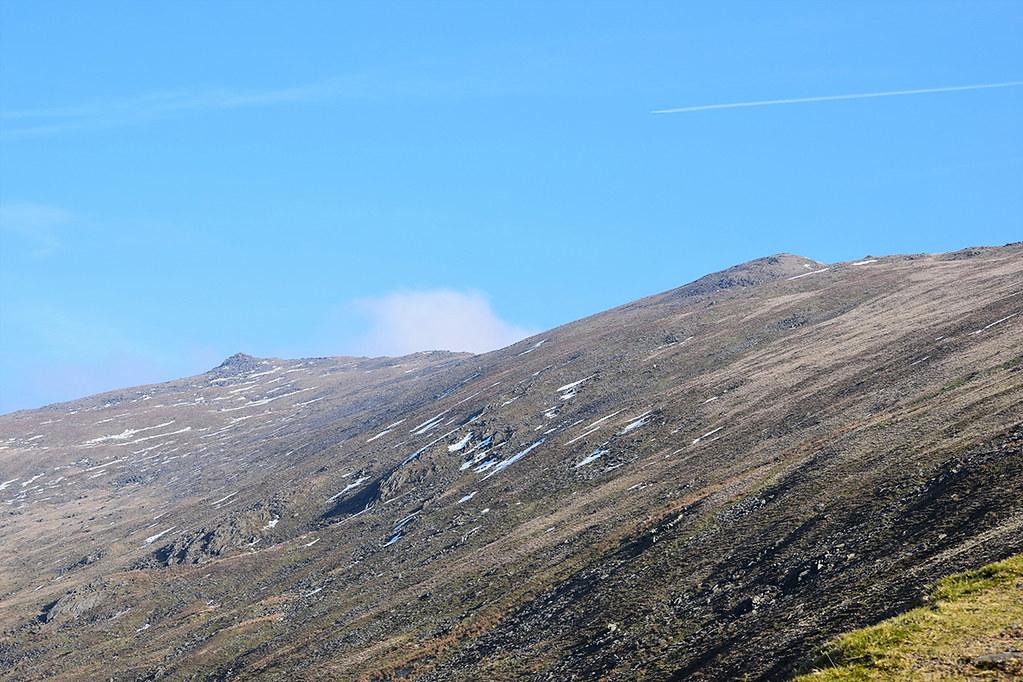 Brown Pike and Buck Pike up ahead

The wind was strong, but on the first turn N, it became really hard walking, up to Brown Pike. I'd chosen to go this way to get what I thought would probably be the worst of the wind over with, and come down on the west side of my 'circle' at the end, in more shelter. With it coming from the east, it was mostly going to be blowing me sideways rather than upwards, but that was ok.

Looking back to Brown Pike, on my up to Dow Crag, I could see the folk behind me still battling with the huge gusts up there. 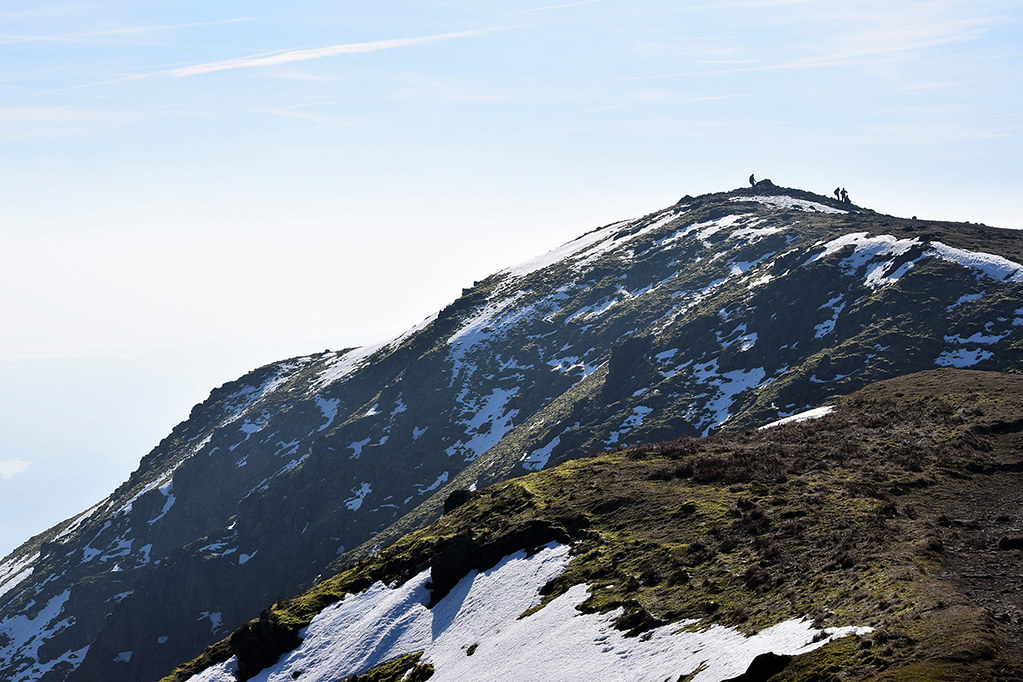 Taking peeks over and down to Blind Tarn and Goats Water, or down the magnificent gullies of Dow Crag was a bit challenging in the wind. In principle, you'd be blown back on to the grassy slope. In practice, it was so gusty, it would just knock you off your feet and hurl you any which way. It's a lovely little scramble up into the Dow Crag summit hollow, and in I clambered to admire the view and try and shelter from the worst of the wind. 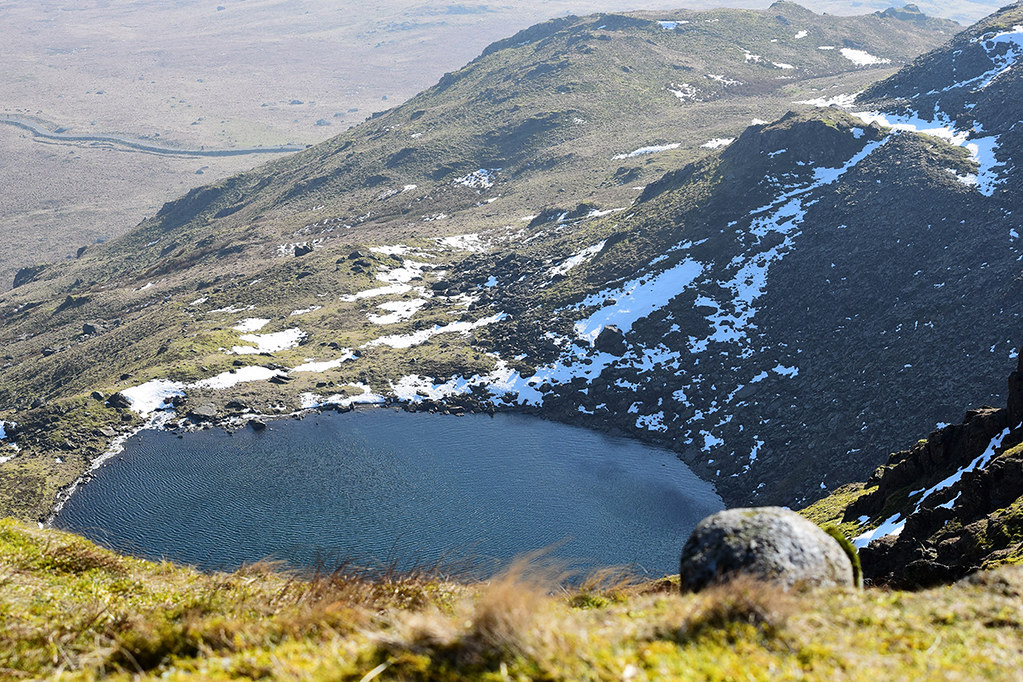 Looking down to Blind Tarn, so called because it has no out-flowing beck. 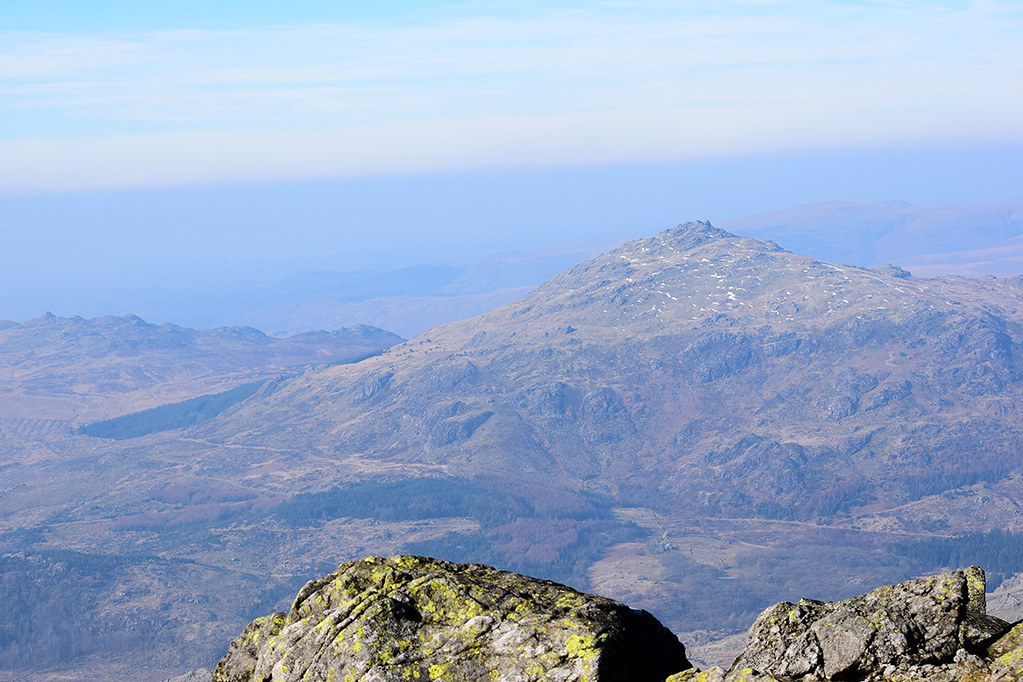 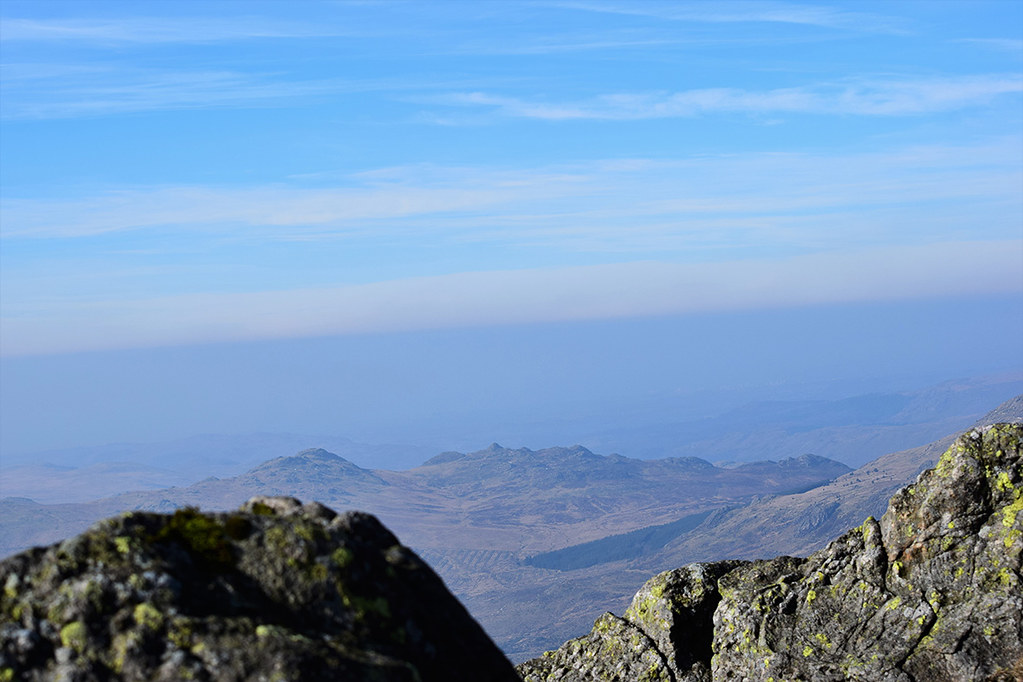 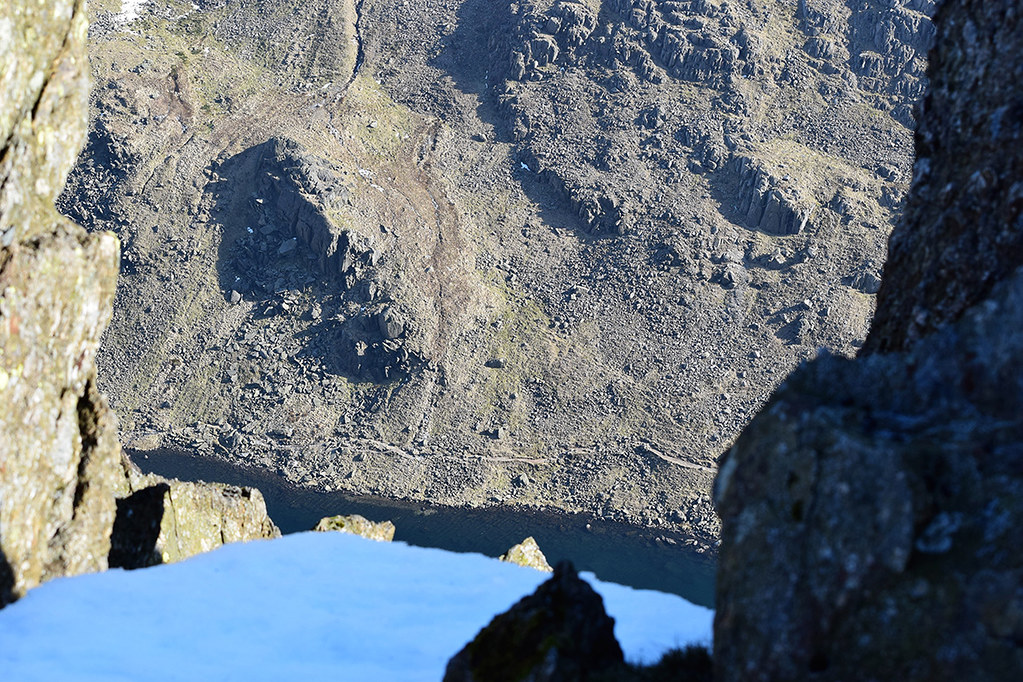 Peering down a snow-topped gully to Goats Water 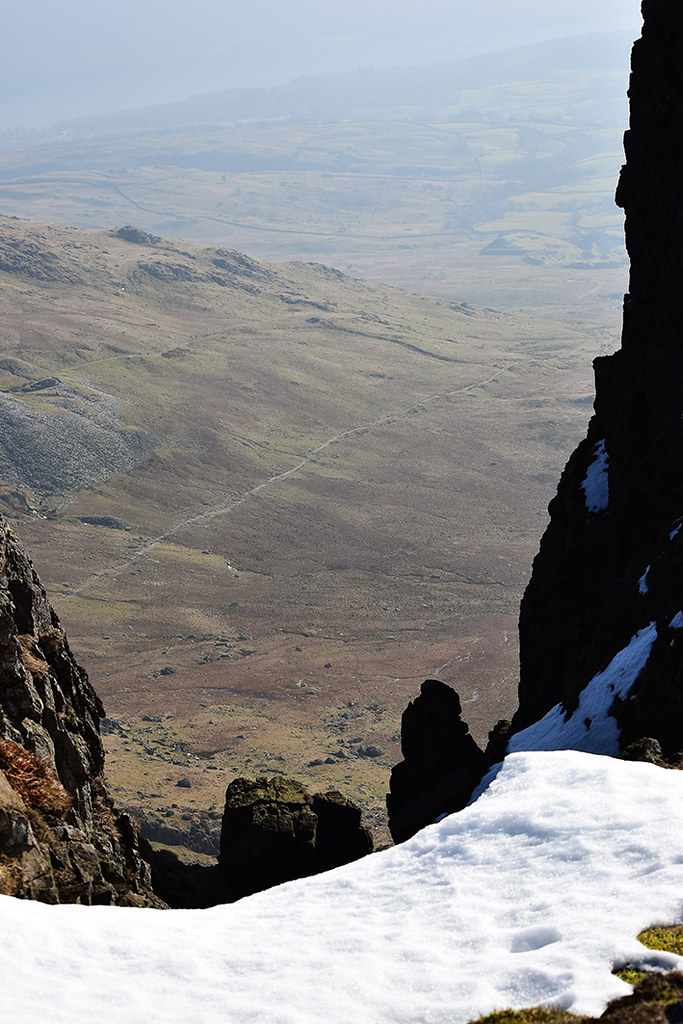 What I hadn't heard, but a chap who suddenly appeared in the crater-like Dow Crag summit told me, was that a scrambler had sadly fallen off South Rake on Thursday. It's a route I'd be too afraid to scramble - I've read Mountain Coward's account and I take my hat off! - but I understand the appeal. Seeing the press bits about this week's tragic death, it is, not surprisingly, the snow and ice that the rescue team are warning about.

After a few gulps of water, on I went to Brim Fell. 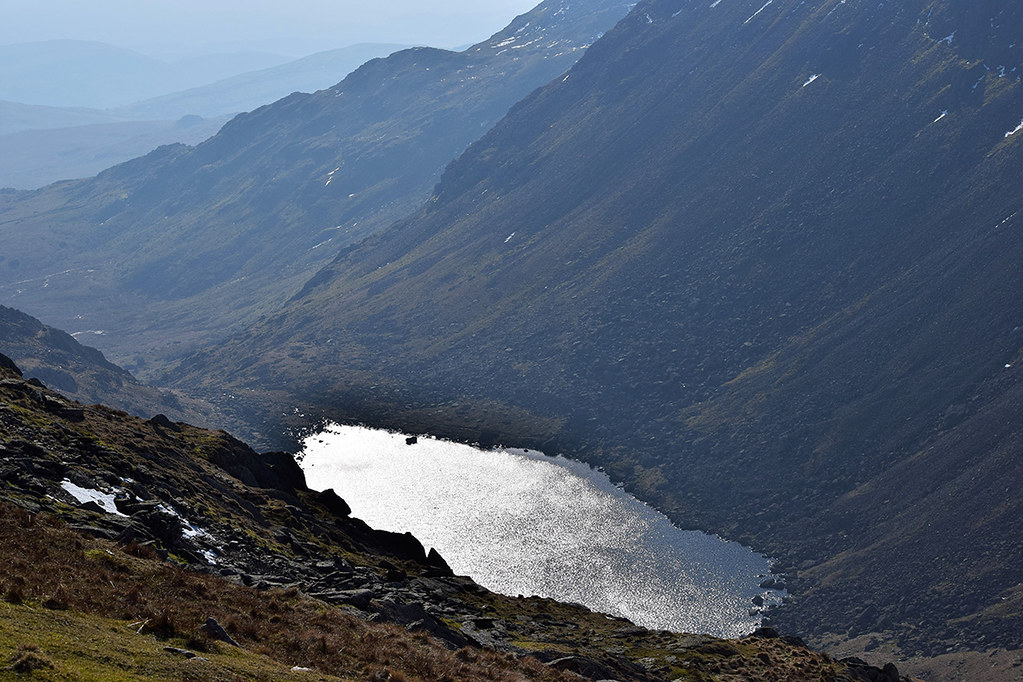 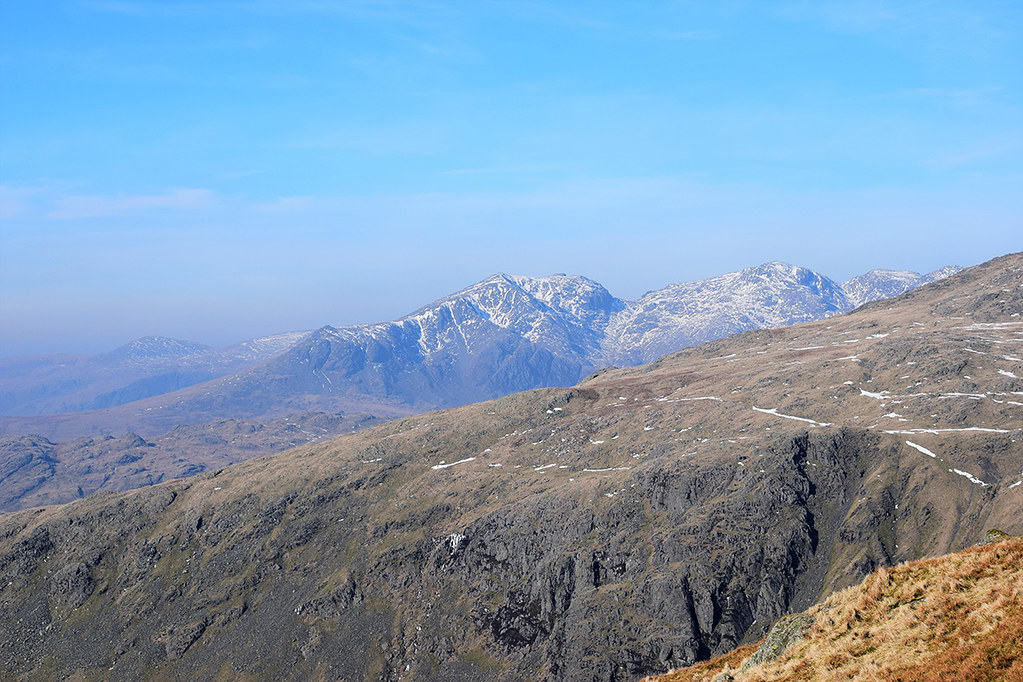 Scafell Range with Haycock behind on left 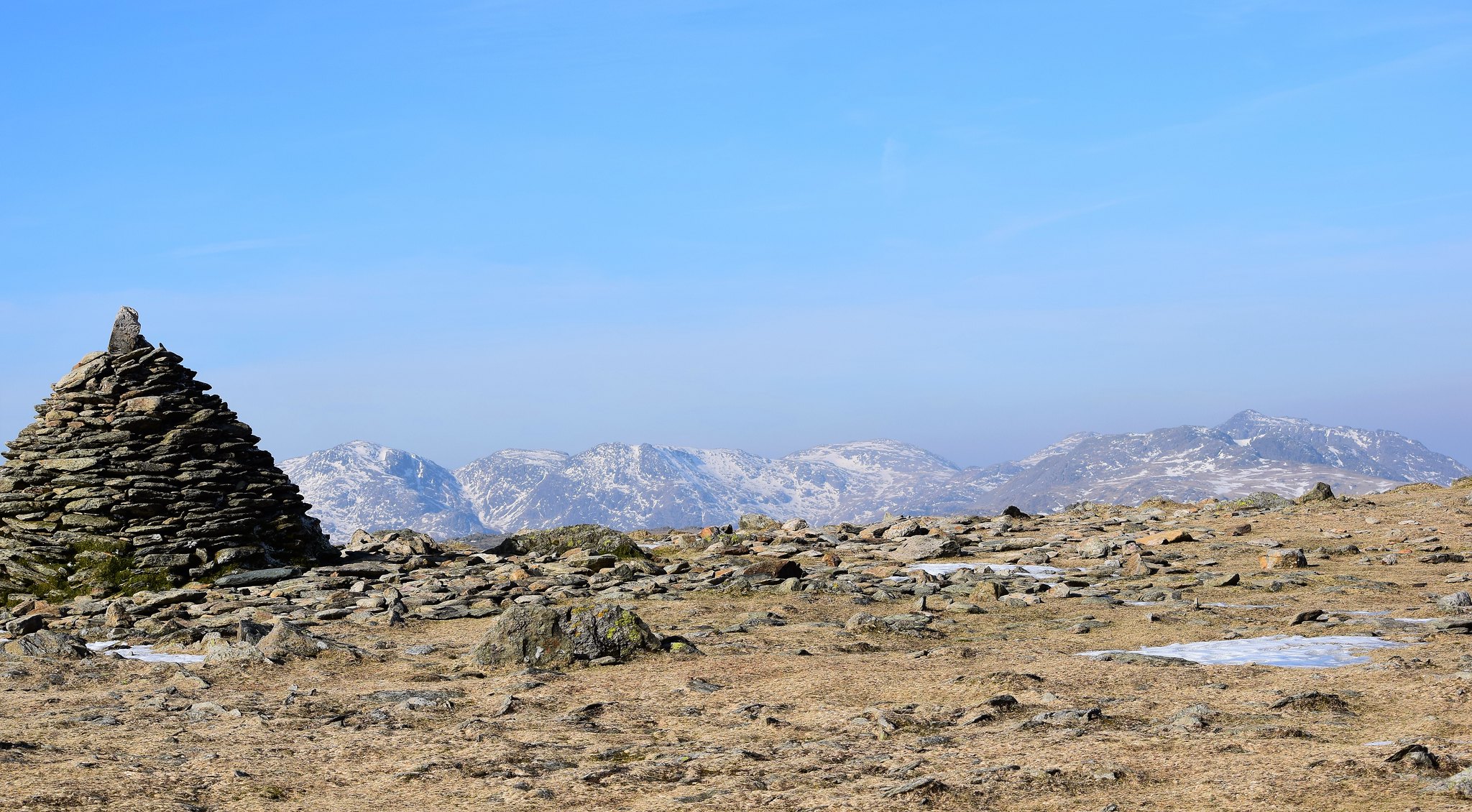 Up here, the Scafell range was still stealing the view. Back to the south, I'd curved round just enough to get a fairly good view of the Dow Crag buttress. Over to the east it was still hazy. 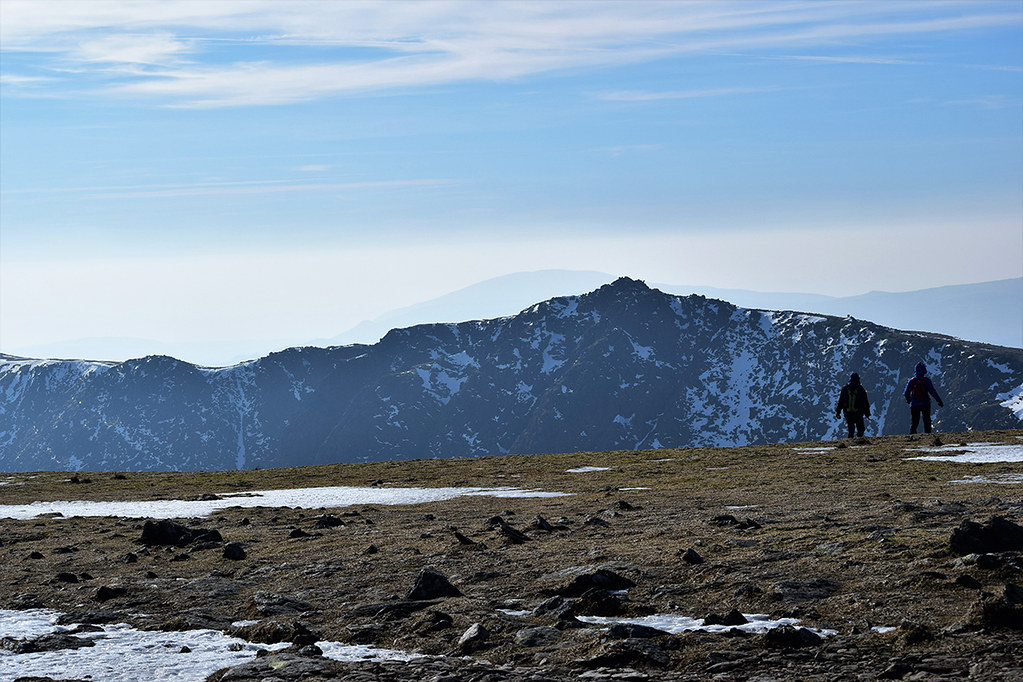 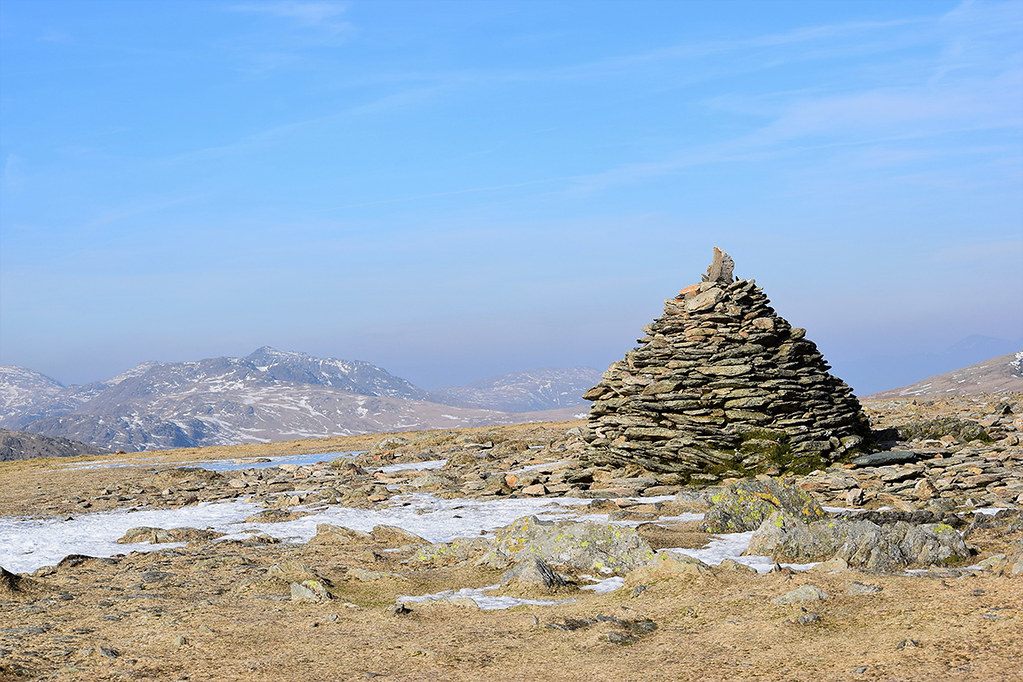 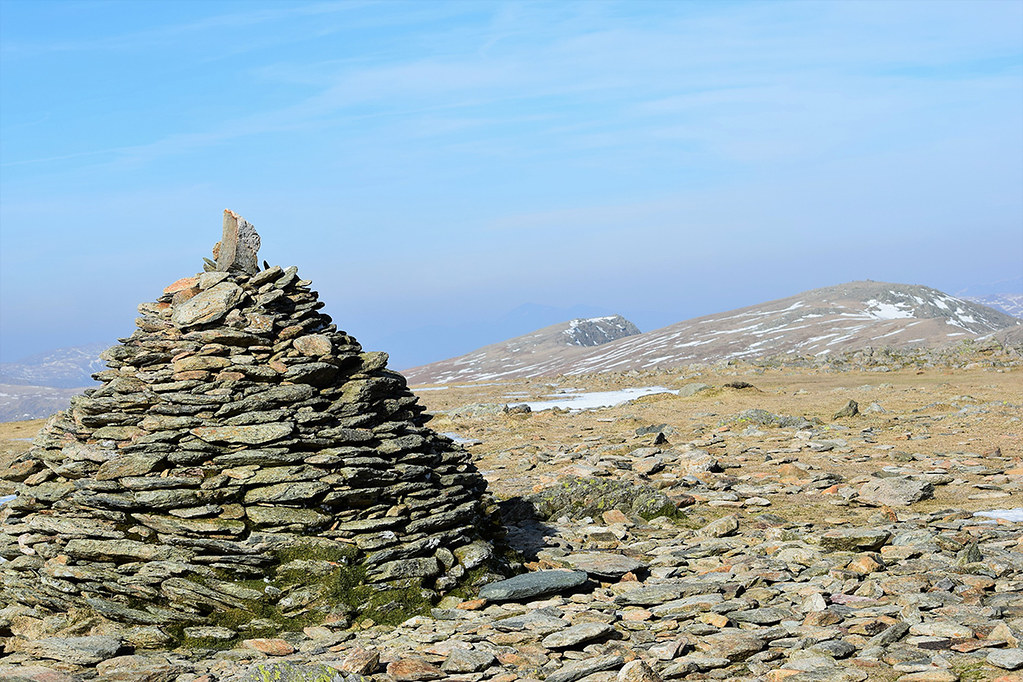 North to Swirl How then Great Carrs and Skiddaw shadowy behind

Swirl How lay ahead, with a little drop down to Levers Hause first, and a delightful view down to Coniston. 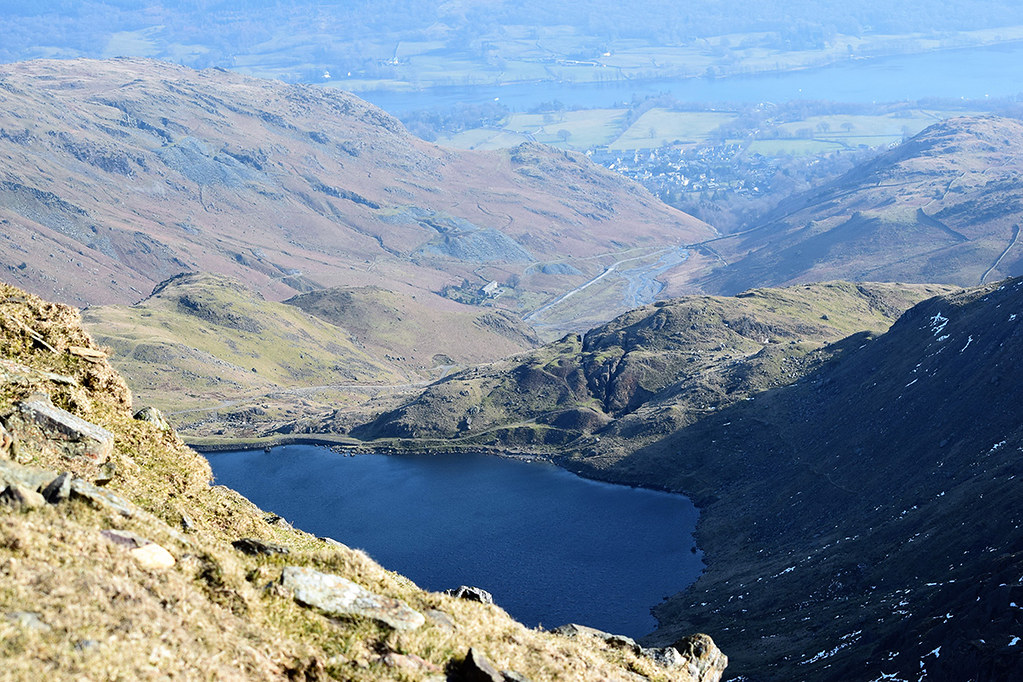 Levers Water down to Coniston from Levers Hause

Ahead to Grey Friar on left, Swirl How ahead/right with Scafell range between

Gaining on Great How Crags then Swirl How and Great Carrs, beyond, comes into view

Top of Little How Crags 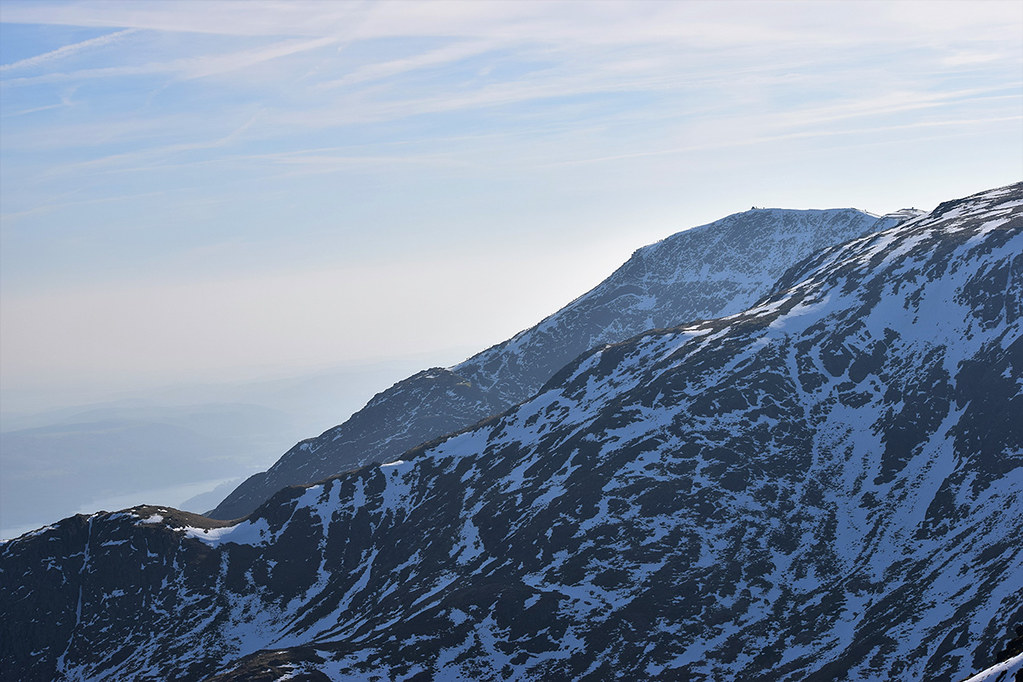 Once up at Swirl How, Bowfell was looking superb. So were the Langdale Pikes, and I could make out Blencathra through the haze of the February sun, also with snow on its top. 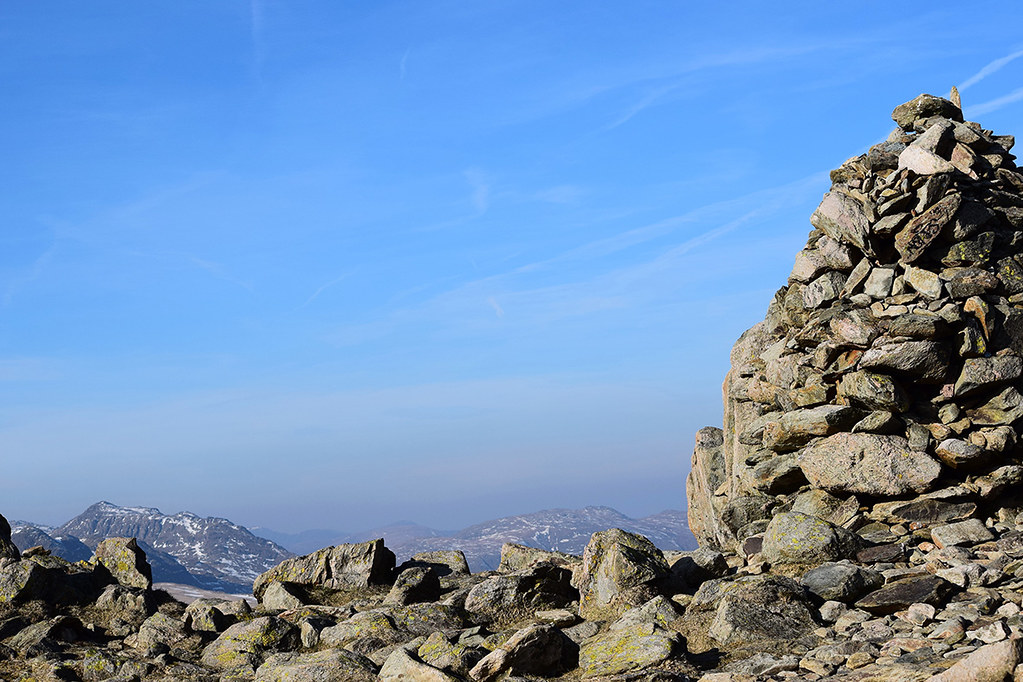 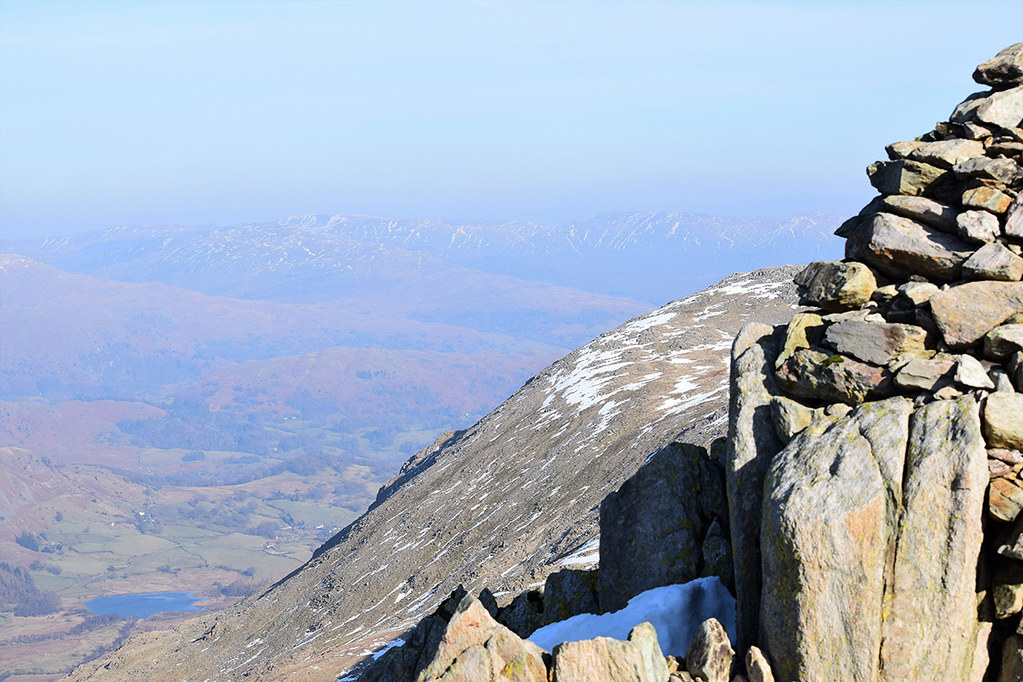 Little Langdale Tarn to Loughrigg Fell with High St behind. Wetherlam is th elump behind the cairn

Whin Rigg to Bowfell pano WNW from Swirl How. Great Carrs in the foreground 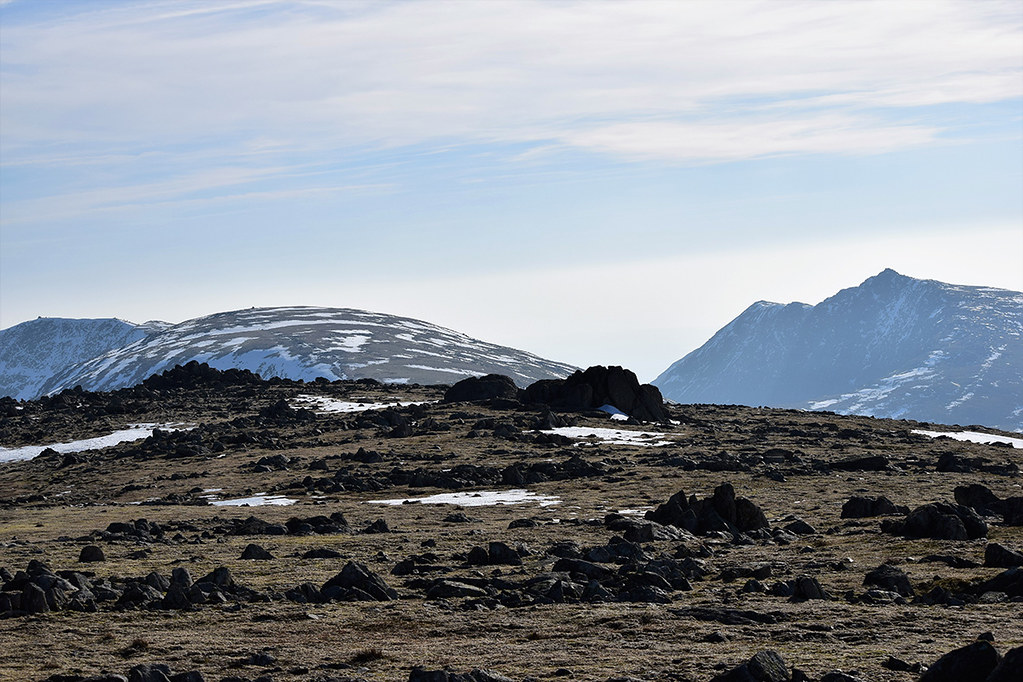 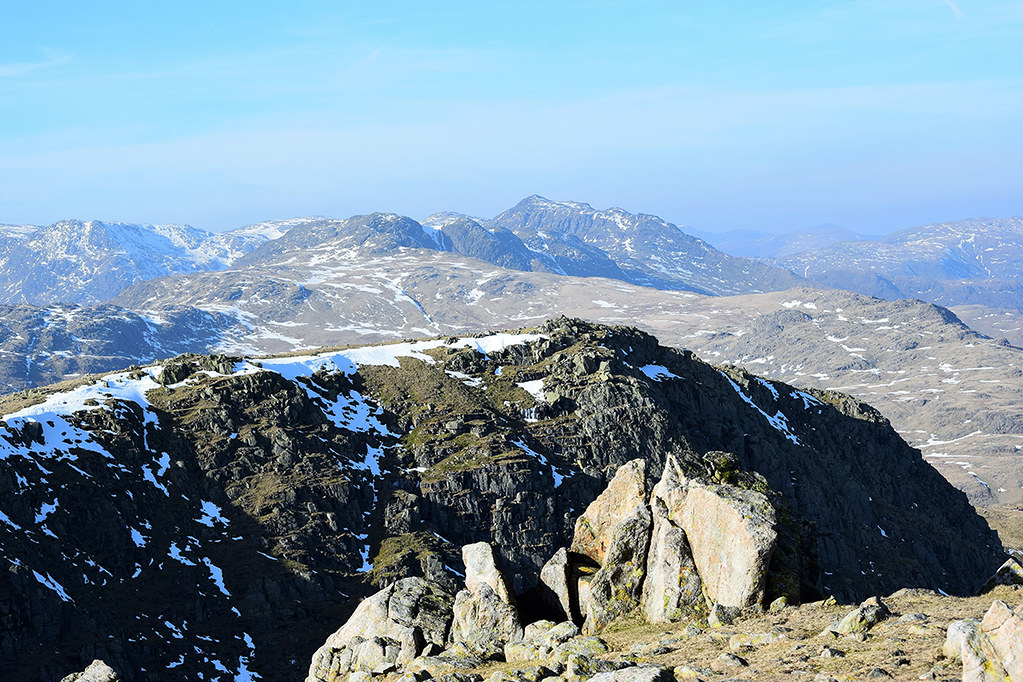 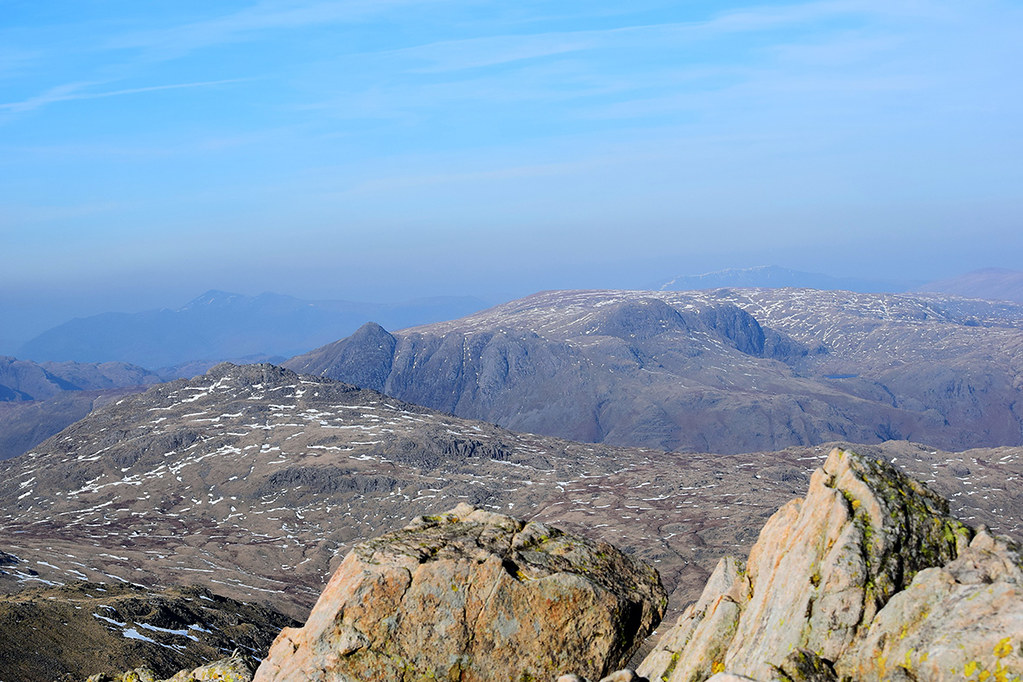 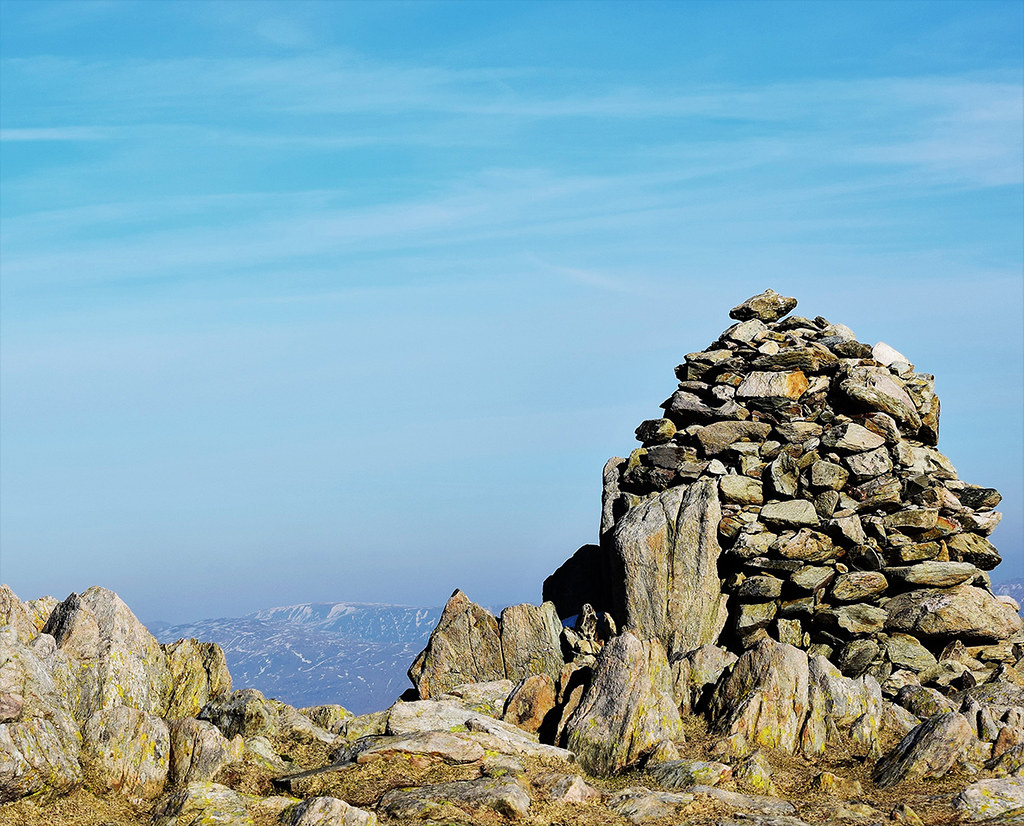 High Street from Swirl How summit

And so on to Great Carrs. The wind was easier to deal with up here. On the way there had also been a few stretches of rock solid frozen snow, just the right consistency and depth for crampons, but only about 50 yards at a time. Maddening! Some I walked round, some I stomped over as best I could, kicking my boots in (mostly downhill slopes, so heel-kicking rather than toes into hard snow!) Up here the patches were smaller. My boots, however, were hurting. I've had a couple of comfy walks in these Sportivas, but more painful ones. Reluctantly, I think I might have to go hunting about again - this pain after only a few miles is making me limit how far I go, which is frustrating.

Scafell range again with Hard Knott in front. The air crash memorial on the west flank of the hill (Broad Slack). 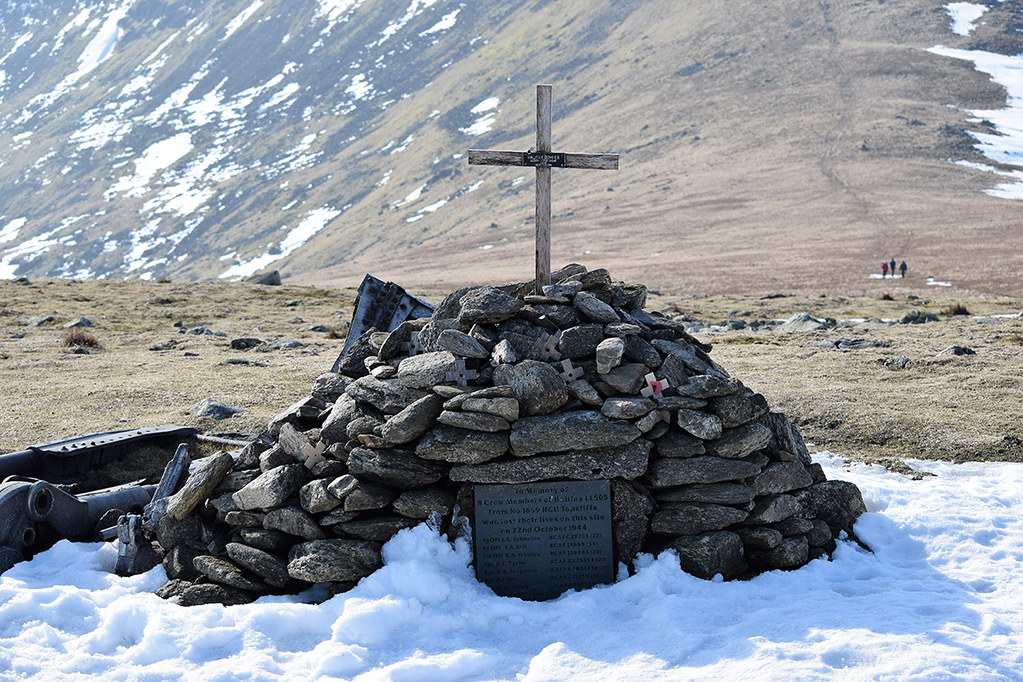 1944, lost in cloud, an RCAF Halifax dropped down below the thick cloud to get bearings, but they were closer to these peaks than they'd realised. I had the place to myself - the Old Man was covered in crowds, but these fells aren't as popular - so I took a little time at the memorial and then headed on up to Grey Friar with my aching feet.

At the cairns there, I pulled my boots off, wriggled my toes, pocketed one of the two socks on each foot and did the boots back up. Then I put the sack back on. Then I remembered I wanted water. Pack off. Gulp down water. Pack back on. Then I remembered I wanted to put the ice axe away and grab my sticks for the wince-inducing descent (unless my sock-reduction was going to work). Pack off, axe on, sticks off. Pack back on. And descend...

Dow Crag (left) over to Stickle Pike (right) with Black Combe behind, from Grey Friar 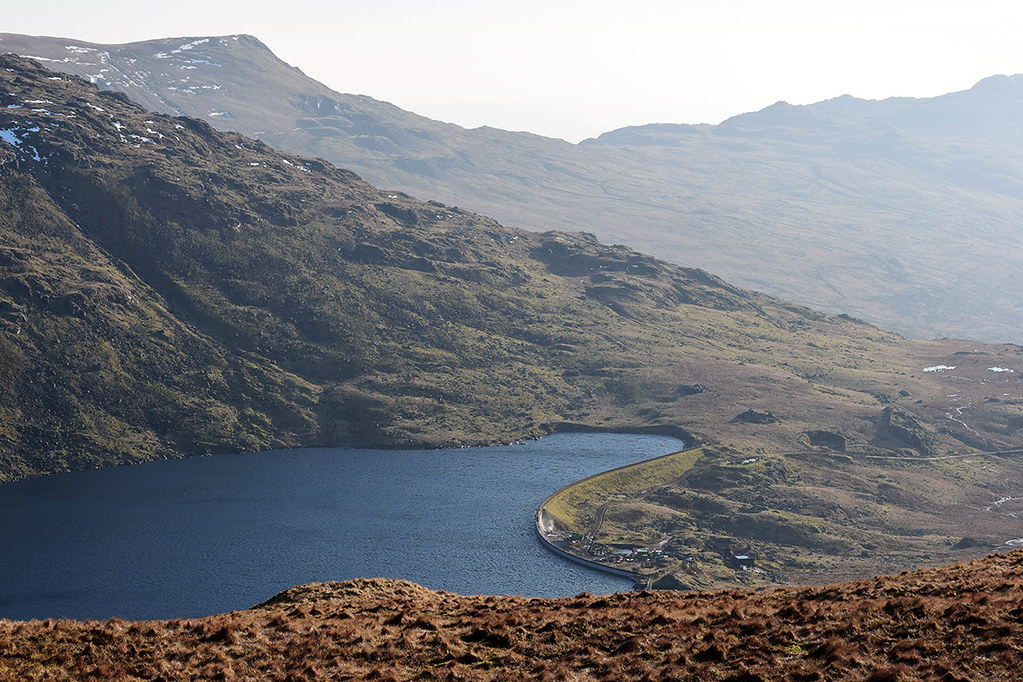 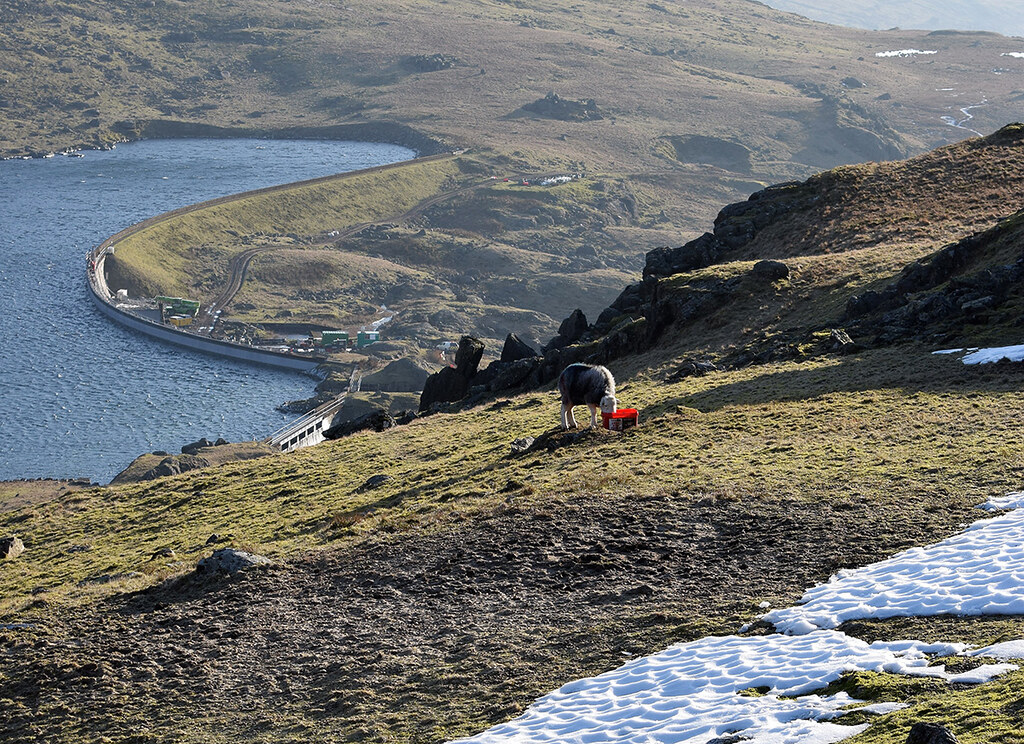 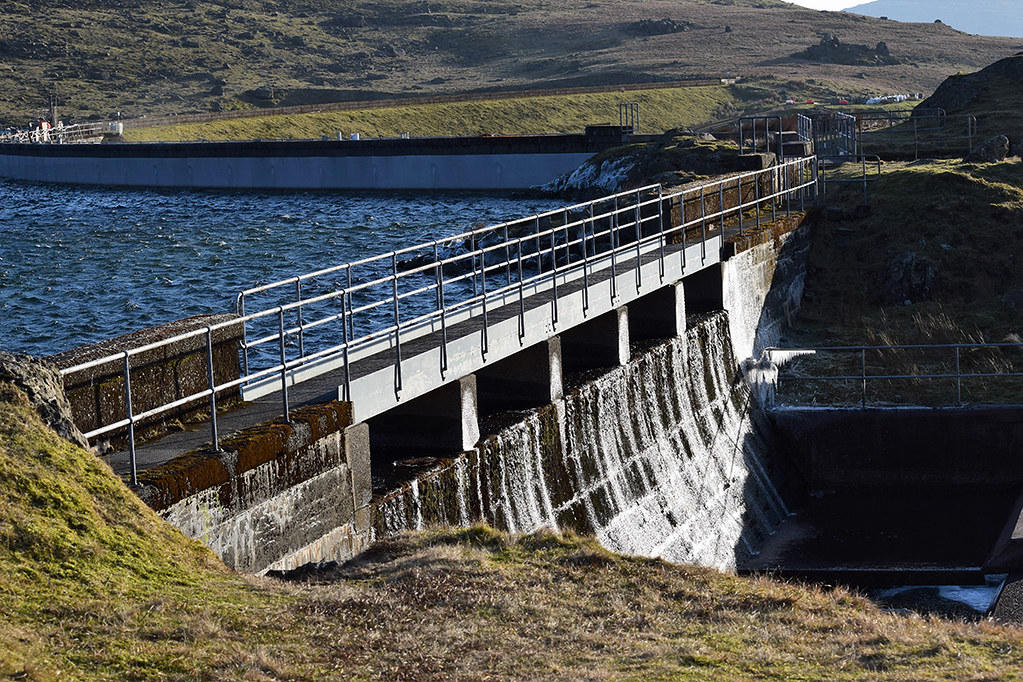 There was a team of workmen on the dam, and they'd put up a makeshift No Entry sign at the gate, so I was glad to see the outflow so dry, since that was my route to the other side! Jumping painfully over the beck below the dam, I headed back up to the dam height again to join the reservoir track and made my way in the gorgeous afternoon light back to the car, to boots kicked off, and to a long drive back to Stratford for the night.

A long way to get my fix, but boy, I needed that!

That looks a really good way of walking the Coniston fells; I've never done them from the Duddon side. Some great photos. I was on Bowfell & Crinkles same day.

Brilliant photos that show that the "other" side of the Coniston group has just as much to offer as the usual routes!

I haven't been onto the Coniston Fells from that side either - looks like a fine day out, if a little hazy

As others have already said, interesting to see these done from the west, rather than the east.

A really superb set of pics that capture well these hills - great stuff.

You sure had to travel a long way for your fix....

If it wasn't for the patches of snow everywhere...I'd swear it was a fine summers day among the hills.

A fine walk with some great photos of the day

Maybe investing in a new pair of boots then

dav2930 wrote:That looks a really good way of walking the Coniston fells; I've never done them from the Duddon side. Some great photos. I was on Bowfell & Crinkles same day.

HalfManHalfTitanium wrote:Brilliant photos that show that the "other" side of the Coniston group has just as much to offer as the usual routes!

malky_c wrote:I haven't been onto the Coniston Fells from that side either - looks like a fine day out, if a little hazy

I had a hunch that with the cloud lifted and the sun shining, it was going to be busy on the usual routes. Not 'alf! But it would be a pretty undramatic plod til you get to Dow Crag if you're used to looking at Scafell & co on a regular basis. (I'm not

Malky - your own Saturday takes some reading!

Alteknacker wrote:You sure had to travel a long way for your fix....

You'd have done the same AK, though you'd have walked three times the distance (and lost a hat or something

). I haven't got up any heights since Ben Lui in December, and sank in snowdrift-covered bog too much to get to the top then!

onsen wrote:If it wasn't for the patches of snow everywhere...I'd swear it was a fine summers day among the hills.

trailmasher wrote:A fine walk with some great photos of the day

trailmasher wrote:Maybe investing in a new pair of boots then

Galling. They're great boots, lovely weight, superb for winter scrambling and crampons - just my feet are the wrong shape