I bet that very few people in the hill bagging world of Scotland inspire to climb Beinn na Gucaig and Tom Meadhoin. the two Grahams are tucked into the corner between The Mamores, Loch Linnhe and Loch Leven and are surrounded by much higher and more interesting peaks. Even to the south, across Loch Leven, the shapely top of Pap of Glencoe and the steep slopes of Sgorr a'Choise (both Grahams) offer much more thrilling outings. Therefore Tom and Beinn don't get much attention from casual walkers, but they can offer something that other hills in this area probably lack: solitude, silence. I bet if you decide to visit this duo, regardless of the route (there are a few different combinations), you won't see a soul, especially out of summer season.

It is possible to make a big circuit from Lundavra, including the two Grahams and a sidekick Sub'2 Marylin Doire Ban, but most of this route is on pathless ground and we didn't fancy drowning in bog. Our idea was to climb each Graham separately, starting with Beinn na Gucaig up its southern ridge. I must say, this is a very attractive route up this small mountain, a long but easy ridge with some sort of track/path for most of the way. If I can recommend anything, pick a good day to do it. Views are fantastic not only from the summit, but all the way as you descend south down the ridge.
This walk starts from Foresrty Commission car park in Inchree, where red squirrels hop about and sometimes panthers run wild: Our route follows forest tracks and the n the southern ridge of Gucaig. It's wet higher up:

Track_BEINN NA GUCAIG 13-03-18.gpx Open full screen  NB: Walkhighlands is not responsible for the accuracy of gpx files in users posts
We followed the red trail from the car park (paths are marked for woodland walks) and turned right onto a wide forest track, crossing the hillside at about 100m. from the track, there are superb views down to Inchree and Loch Linnhe. The cloud was still present when we started, but we hoped for a sunny day later on:

After about 600m on the track, it is important to keep an eye on slopes to your left, where you should spy the boggy start to an ATV track. We somehow missed it the first time and ended up hopping over bog to locate it higher up. The picture was taken on the way down - so here is what you're looking for: 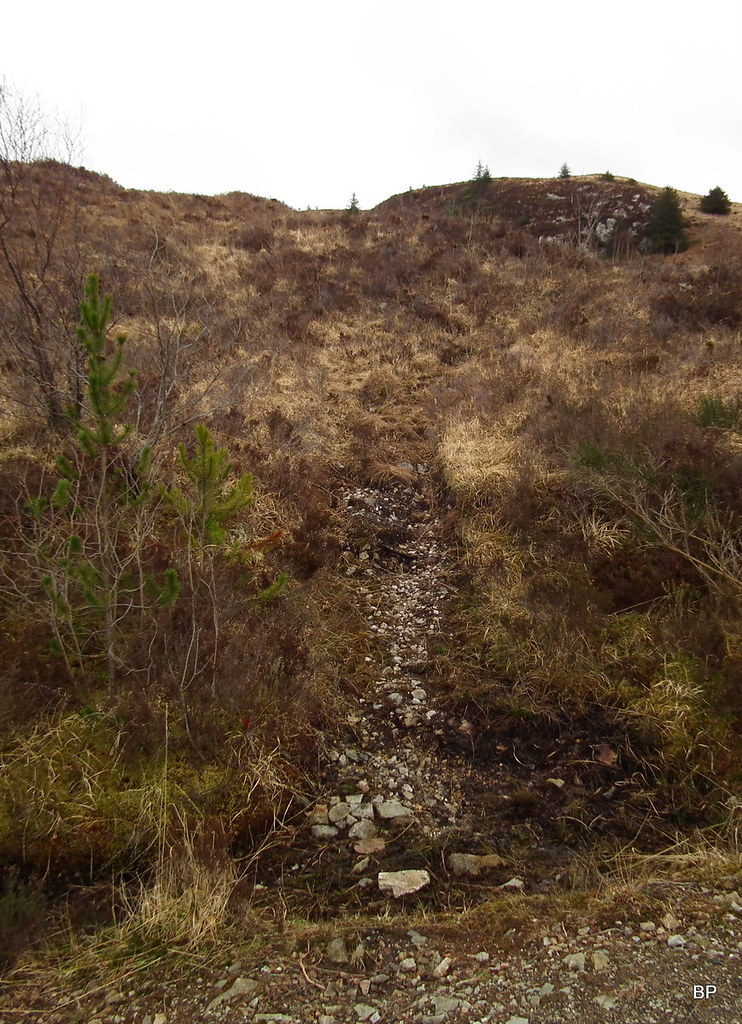 2018-03-13 onich grahams 134 by Ewa Dalziel, on Flickr
We managed to find the track after 10 minutes of trudging up a wet, lumpy meadow. It was a relief to find some sort of path - it was still squelchy, but much easier to walk on than the bumpy wild terrain around!
Blessing in disguise? 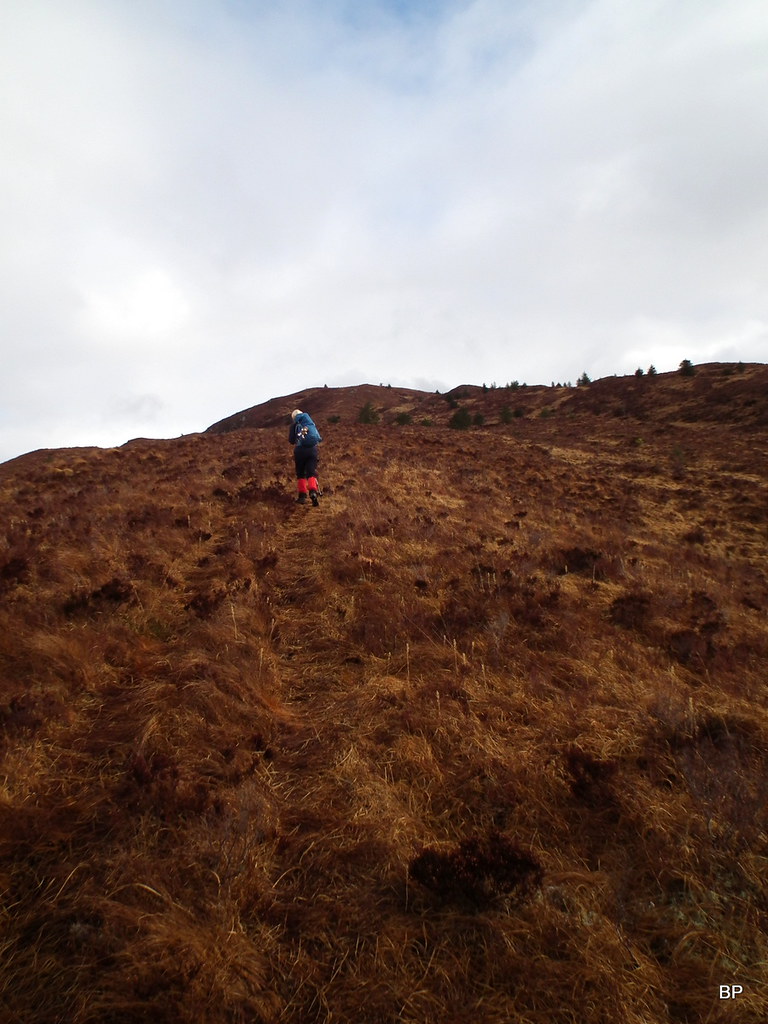 The clag was patchy and it was definitively lifting as we marched up, soon I spotted Ballachulish Munros to the south, only partially obscured by cloud:

Kevin, of course, kept his camera ready for panoramic shots:

The track is much drier on higher slopes and walking becomes quite pleasant, especially if you have vistas to admite

A patch of mist drifted by, obscuring views for a short time:

...but as it passed, we saw the rest of the ridge in front of us - heyy, easy going!

This construction belongs to Mountain Rescue, please don't fiddle with it: We were very pleasantly surprised by this wee mountain, so far we had great vistas for not much effort. We reached the lower top (575m) to discover that the true summit lies across a wide col, only a short distance away:

2018-03-13 onich grahams 075 by Ewa Dalziel, on Flickr
Shame that the clag didn't lift from the mountains to the west, as there is much rugged terrain to admire in that direction

We're already cooking up ideas for Corbetts and Grahams across the loch!

We crossed a couple of slushy snow patches and climbed the final meters up the grassy slopes to the summit of Beinn na Gucaig. It has a trig point and not much more, but on a good day it should be a superb viewpoint. We only got some of the famous vistas, but it was enough to keep us smile. Lucy celebrated her 55th Graham! Meowing time, no cairn to scramble over, a small pile of stones must do

Sadly, the Mamores and Ben Nevis didn't shake off the grey cloud...

...while the high peaks to the south basked in sunshine!

It was surprisingly cold on the summit despite low winds, so after a hot cuppa and a snack, we turned back to retrace our steps down the southern ridge. it was still early but we had a second hill in mind, so we didn't linger...

This is the one we wanted to add to our tally today: Tom Meadhoin.

...and in the near future, possibly on a lovely summer day, we would like to climb this one, too. Garbh Bheinn of Ardgour: It's amazing how the water, cloud and mountains merge in together to create such a wonderful world of splendid vistas We descended to the forest track and walked back to the car park, and before leaving we had a quick re-arrangement of mountain gear. It was warm and there was very little snow on 600m, so we decided to unpack crampons and bodywarmers, to climb the second hill with less weight on our shoulders.
........
The fastest route for Tom Meadhoin starts near Callert House, from a small layby at 097604. One car was already parked there but we managed to squeeze in behind it This route is very often used to combine "our" Graham with Mam na Gualainn, a lovely Corbett across the high col. But if I may suggest anything again... If you have time, it is better to climb MnG from Kinlochleven, taking in the whole length of the ridge (there's official WH route for this option). We did it in 2016 in early spring and had an unforgettable day. Popping in to MnG from Callert side might be quick and convenient, but it hardly does justice to this magnificent mountain.
Our route to the second Graham:

Track_TOM MEADHOIN 13-03-18.gpx Open full screen  NB: Walkhighlands is not responsible for the accuracy of gpx files in users posts
The climb up to the 466m col is a right of way, waymarked and very eroded, but in such surroundings no one would pay attention to bog under your feet!

We were now very close to the peaks of Glencoe and they looked splendid despite cloud coming onto them from the south:

I don't have much to say about the ascent itself. It's steep-ish and wet-ish and somehow boring-ish

but one gains height quickly. We had been on this bealach before and I remembered a large cairn marking the highest point. We found it easily and turned left (west) along the less steep ridge leading to the summit of the Graham. On the way, we took some time recording the views:

The best panoramas are to the south, where all the Glencoe mountains are lined up like soldiers on parade:

The final walk to the summit. I was surprised to see a path:

Up the final slopes, western Mamores behind me, Mam nan Gualainn to the right:

Lucy was first on the summit... ...I followed with my 89th Graham. Next one would be a round number and I was already preparing to celebrate... Little did I know that my celebrations would be cut short by beastly winds, but that is a story for my next TR. Hills to the north-east in the distance:

The lower top (615m) is only a short stroll away, but it was getting late so we didn't bother:

Glencoe and surrounding mountains once again:

2018-03-13 onich grahams 191 by Ewa Dalziel, on Flickr
Weather was deteriorating and at some point it started to snow, so it was time to descend back to the car. Nothing unusual happened on the way down and we spent most time talking about our options for the following day. Forecast was gloomy: gusts 40-50mph, but we still decided to give it a go and visit a couple of easy hills. As it turned out, easy strolls in such strong winds become hard work. We ended up inches from being blown away from the summit of my 90th Graham

Further proof, were it required, that its not just the well known hills that offer fantastic walking and views.


This is a fabulous shot of the wild corries and spurs of Beinn a' Bheithir.

Thanks Mal, I was surprised how good views we had from Beinn na Gucaig, not only to Beinn a' Bheithir but also to Loch Linnhe and west to the wild country of Ardgour... I'm tempted to do this hill again in full winter conditions sometime in the future. Maybe from Lundavra, just to try a different approach

BnB's northern profile is the best, I think. A snap from my archives, taken from the ridge of Mam nan Gualainn: