When winds over Scottish hills reach 40mph, all sane walkers stay home in their slippers, watching the Munro Show and dreaming about better days. Very few are desperate enough to venture out to face the gusts, turning otherwise pleasant experience into painful ordeal. It seems me and Kevin are on that level of desperation already

Not usual for us to push to the limits, maybe another day we'd join the slippers and TV crowd, but we really wanted to have successful spring holidays. Three Grahams so far just didn't sound good enough

Because weather was so unfriendly, we opted for two "quickies" - a Graham and a Sub. They can be both climbed on the same day with a short drive between them.
The first hill was Creag Dhubh. We had hoped to visit it in full winter conditions, but somehow ended up climbing all sorts of other hills

We managed to tick off everything in the area of Glen Spean - Glen Roy, with only this Graham left. SMC Guide says the most convenient route is from the south, from an old church and cementary, where there is ample car park: The easiest way up follows the western ridge but we wanted to be a bit more ambitious and do some sort of circular, tackling the southern face of the Graham. I would NOT recommend this way up on a wet day or in winter conditions. It's unpleasantly steep and in summer time would be overgrown with high bracken. On the other side, it makes you work for otherwise a very easy wee mountain. The choice is yours

Track_CREAG DHUBH 14-03-18.gpx Open full screen  NB: Walkhighlands is not responsible for the accuracy of gpx files in users posts
It was windy enough when we opened the car door. We prepared carefully, wrapping up in all possible layers (it was cold, too!) and set off for what was going to be an epic stagger

Panther ready to go, the Easains ridge in the background:

We walked through the cementary (what is it with the spellcheck??? Is it spelt cemetery, semetery, cementery, schmetery... OK, graveyard will do!!!) and stepped over the fence in the opposite corner. After crossing a wet meadow, we came across a second fence, this one barbed so it took us a few minutes of careful gymnastic maneuvers to get across. What we didn't realise, there is actually a gate in this fence about 200m to the left (as you face the hill).
The graveyard:

Looking back south across the burial ground, another Graham, Cnap Cruinn, on the horizon: 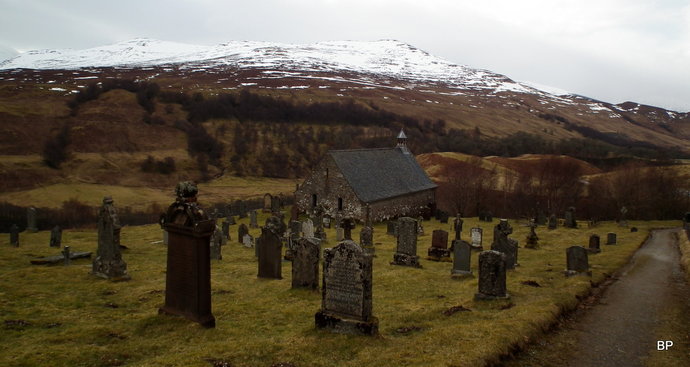 We crossed a little dip with Allt a'Bhalaich stream and came out on another grassy meadow. Here, we were unpleasantly surprised by five sheep carcasses lying about (thankfully, the strong wind took away the stench of decay). Obviously, they fell victim to the Beast from the East

No photos attached, as I didn't consider it funny to photograph poor deceased relatives of wee Lucy!
We left the sheep graveyard behind and tackled the steep slopes. To start with, we were protected from the wind by trees, but as soon as we emerged onto higher ground, walking turned into staggering, wind-dancing, tottering and wobbling - pick what you find most amusing

On the level of the first parallel road (270m) we came across something looking like a trig point, but if it is, strange place to place one: 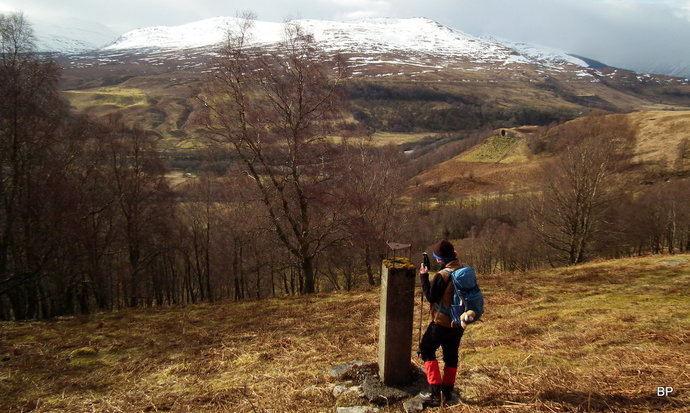 Judging by the amount of dead bracken, this slope in summer must be a jungle: 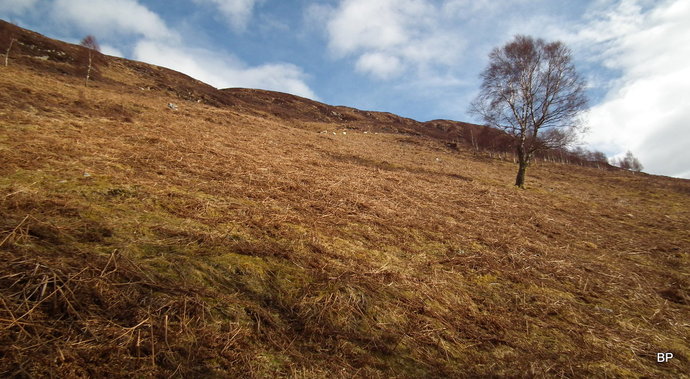 Photos may not show it, but we really had problems walking in a straight line as we gained height on the steep section. Luckily, wind was blowing from the east, pushing us into the slope, not away from it. At least we knew this was only a Graham and not the highest one, so our dancing-balancing adventure shouldn't last long: 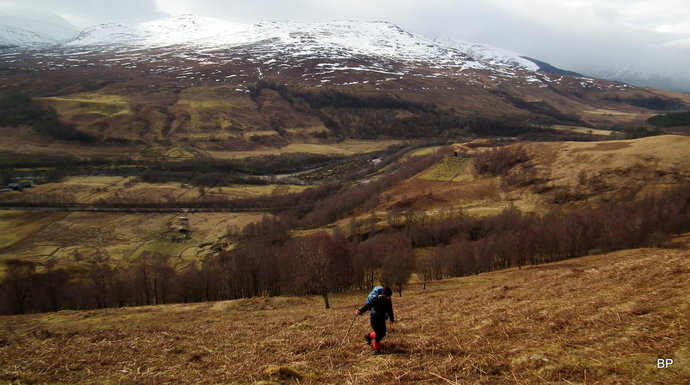 The ground was getting steeper (if it was possible!) and dead bracken gave way to heather and scattered boulders. Which was good in a way, as a branch of heather can be grabbed and used as a stabilizer when a strong gust of wind makes an attempt to push you off-balance.
Cloud in the western sky: 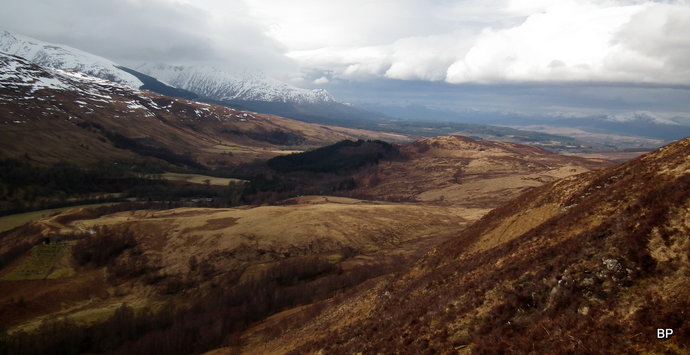 A rare quieter moment, nice views down to Glen Spean, shame about the cloud cuddling the summits across the glen, but what could you expect on such day! 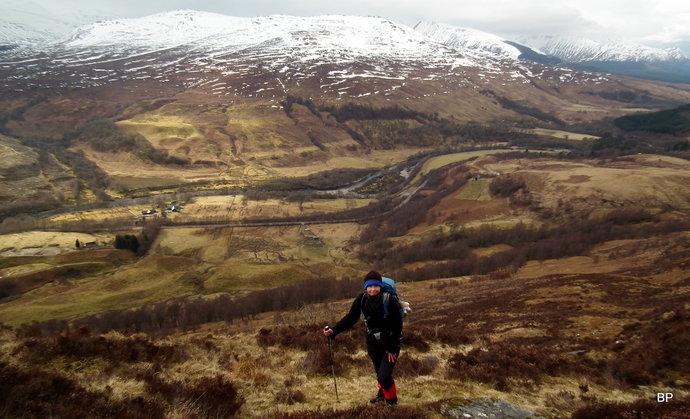 We passed the second parallel road and at about 450m, the angle eased significantly. The final 200m to the summit are on much easier ground and in any other circumstances would be a pleasant stroll:

I believe, I better conditions, this Graham would be a good viewpoint, especially to the west and north-west towards Glen Roy, but the day was so gloomy that we didn't even bother taking too many pictures...
Gloomy western horizon:

Just below the summit, a shallow dip offered us some protection from the wind... 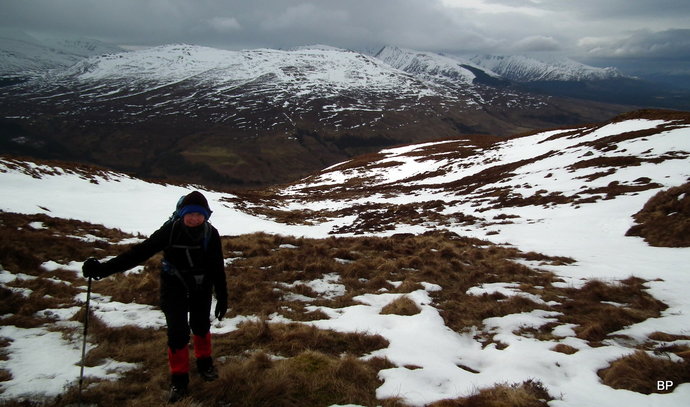 ...but as soon as we emerged on the top, we were hit by constant blow of probably 40mph, it was almost impossible to stand up, I grabbed the trig point and prayed that I wasn't blown away! 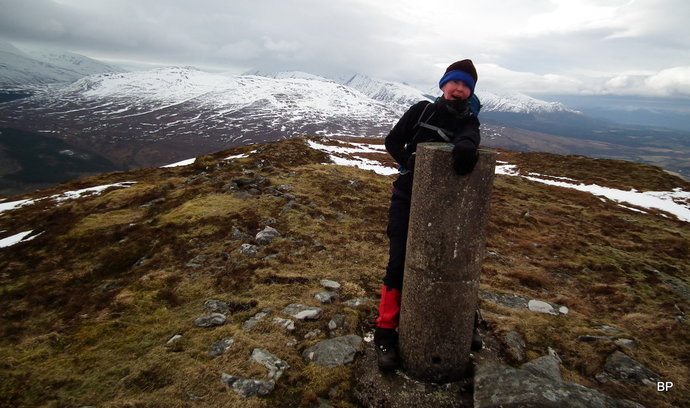 Kevin, who weighs about 15kg more than me and therefore was less likely to be blown over, managed somehow to take a few pictures on the summit, standing with his legs wide apart and cursing as straps of his rucksacks flapped him in the face...
Panorama west from the summit of Creag Dhubh, Glen Roy hills and Loch Lochy Munros behind:

The summit cairn (very small) and Beinn Teallach behind:

The tops around Loch Treig:

We felt like the inside of a hoover to be honest, so after five minutes of getting whirlpooled by the wind, we gave up and staggered down the slopes, looking for shelter...
I almost lost my hat!

Glen Roy again, to the left in this picture, our second hill, Beinn a'Mhonicag:

A rare moment of brightness:

We descended the hill as quickly as possible, at least with the wind behind us now, we didn't have to stagger like two drunkards

Our descent route was much less steep. Soon we were back down by the barbed fence, found the gate and made it back to the car park.
The steep southern face as seen from below: 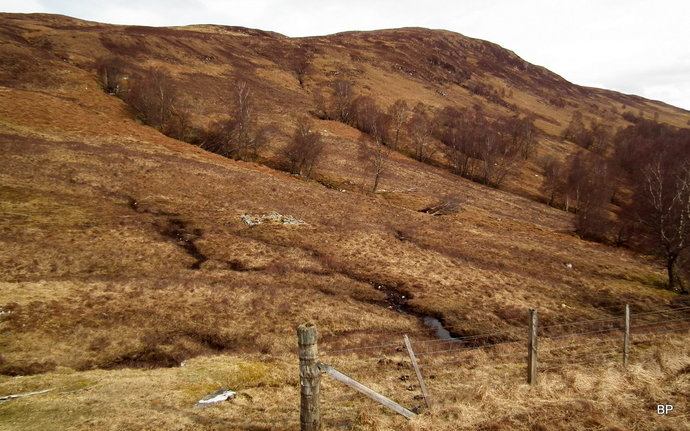 Back on familiar ground:

After a hot cup of tea in the car, we decided, just as well if we're already here, we could climb Beinn a'Mhonicag, a nearby Sub'2000 Marylin. It is easily accessible from the tourist car park at the entrance to Glen Roy and supposedly offers good views. On a better day one could concoct some kind of circular, descending by Creag na Sroine, but we were not in the mood to make our life difficult, not after the battering we received on Creag Dhubh.

Track_GLEN ROY SUB 14-03-18.gpx Open full screen  NB: Walkhighlands is not responsible for the accuracy of gpx files in users posts
There was a car full of tourists in the car park already and they watched us with amusement when we set off to tackle the steep ascent of the hill above us. They must have thought we were bonkers

Tourist car park and the view of parallel lines:

The slope to climb: The climb itself is up a straightforward slope, with a faint path for most of the way. Steep but not drastic. View into Glen Roy - very nice:

It was a bit less punishing this time, maybe the winds have eased a little by now, but still, Kevin's equipment was flapping around 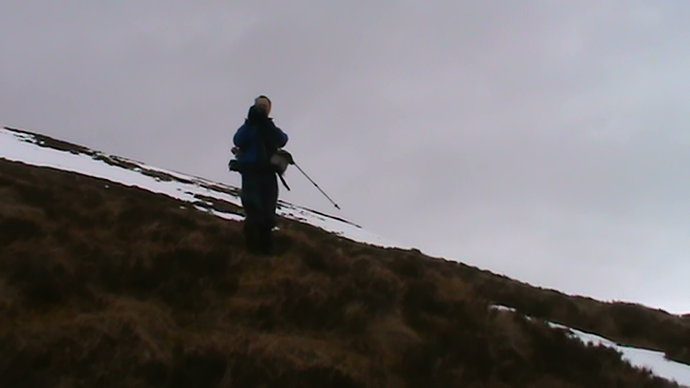 Just behind me, Creag Dhubh: 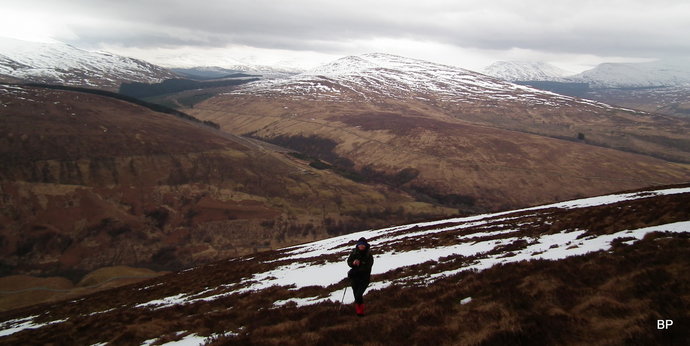 At some point, a gust of wind snatched wee Lucy from my coat pocket and she took off like a rocket

Luckily, she was tangled in heather only a few meters away from me, so I ran to retrieve her. Next time, I must keep her clipped to my rucksack or she will join Sputnik on the orbit

The summit area is flat, with a few peat hags. There are three cairns. The biggest one is in the SW corner of the small plateau, but the true summit is in the NW corner. We visited all cairns, just in case they gets re-measured in the future

Kevin by the large cairn:

Where Ben Nevis should be:

The other Leana Mhor and Beinn Iaruinn: 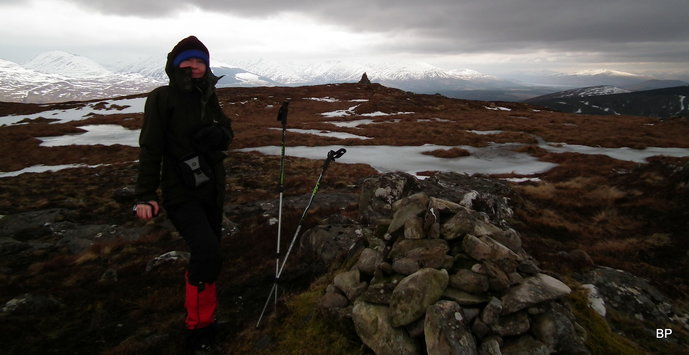 View south from the summit cairn:

Lucy posing on the summit: 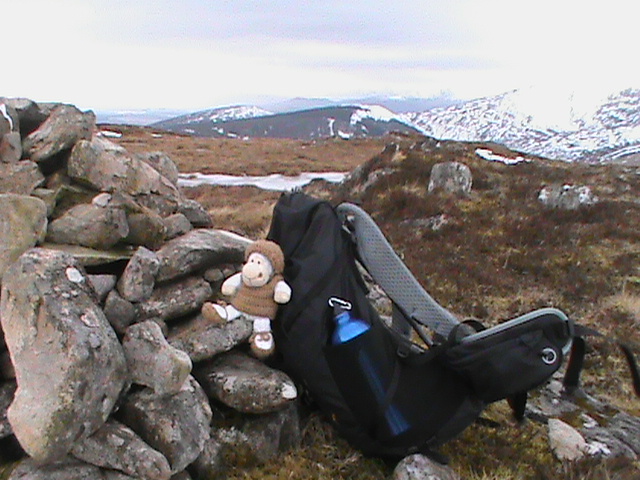 All that was left to do was the careful descent to the car park, making sure we didn't lose any piece of equipment. It was impossible to sit down and enjoy a cuppa by the cairn and I didn't want to risk a Sputnik-like launch

......
Beinn a'Mhonicag could be added to Leana Mhor and Beinn Iaruinn, to make a longer Glen Roy traverse. It is also an easy quickie if you're looking for a good viewpoint.
......
So not a bad day after all, despite the battering. We were glad we managed something and didn't spend the day in slippers. Winds were getting even stronger though, so on the next day we made a sane decision to stay on low ground and went to walk around Loch Affric. I won't be posting a separate TR on it, as the day was even gloomier than shown above, and seeing the recent developments in Glen Affric just added to the depression

Friday was spent on home DIY, but by Saturday weather improved enough to get us going again. We visited Skye where we turned the tables. TR to come soon.