Second weekend of April. Windy, cloudy, grey and murky. But somehow we had a decent day climbing Corbetts!

As usual, we followed the weather to where it looked best, which was due south this time. Long drive down from Inverness once again, but somehow I managed to stay awake in the passenger seat, sipping warm tea and observing the landscape outside. There was still significant amount of snow on the highest mountains, but I hoped that for Corbetts, especially less steep ones, we could leave crampons in the car, just to save ourselves from carrying the extra weight.
We picked Beinn Udlaidh and Beinn Bhreac-liath mainly because from WH description and other reports, we understood the route didn't have any tricky sections and we would not risk turning back or leaving the ridge early due to a hairy scramble, like it happened the week before on An Caisteal. It proved to be a nice circular walk, maybe a tad boggy in lower reaches, but very entertaining and not too long. Weather sort-of cooperated: it didn't rain and cloud was well above the summits. For Scotland, it's excellent conditions

Track_BEINN UDLAIDH 08-04-18.gpx Open full screen  NB: Walkhighlands is not responsible for the accuracy of gpx files in users posts
The starting point is from a gate to a forest track on B8074. Parking is limited, but 3-4 cars can be parked carfully at the wide entrance of the gate. When we arrived though, a group of anglers were camping nearby and their cars were parked all over the road. We somehow managed to find a dry area of grass where we could leave Black Arrow: A short walk east along the road took us to another gate, this is the entrance to a field track. The white cottage seen behind me is not currently lived in: WH walk instruction says cross the boggy pastures. At least we knew that the wet stage was going to be short and soon we'd be climbing up the first Corbett.
It's up there: It has rained the previous night and the ground was rather squelchy, but after the first 100m of ascent it became drier. The climb up the northern shoulder of Beinn Bhreac-liath is a bit of a slog but nice views show up as soon as one gains height.
Cloudy Glen Orchy:

View north to Bridge of Orchy:

Beinn Udlaidh at the moment still in cloud but we kept fingers crossed it might lift later on:

The slog up the grassy slopes became more interesting, when higher up we ventured onto slushy snow: The last 100m of so are less steep and soon we emerged onto the ridge, which is almost flat, with the true summit at the southern end, so a very pleasant stroll on soft grass and moss. i can imagine, in better weather one would have tremendous views in all directions. We only had some of the vistas, but it was really enjoyable ridge-walking Cloud passing over Beinn Udlaidh, Panther ready to be unleashed

Unleashed on the summit of my 134th Corbett and the first new one in 2018! 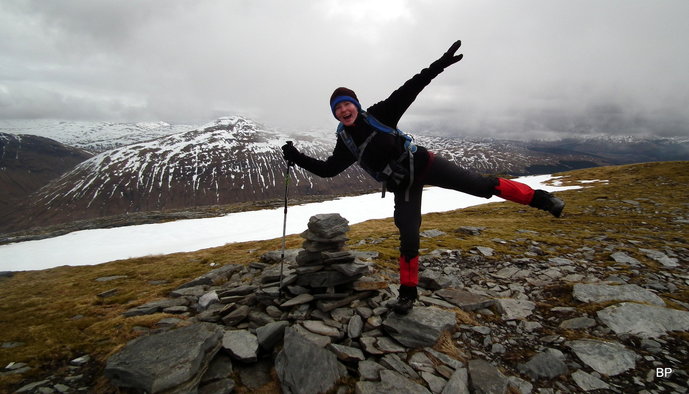 Lucy didn't need the leash, as it wasn't too windy at the moment. She bagged her 61st Corbett. Kevin posing with Beinn Odhar and other Orchy Corbetts behind: 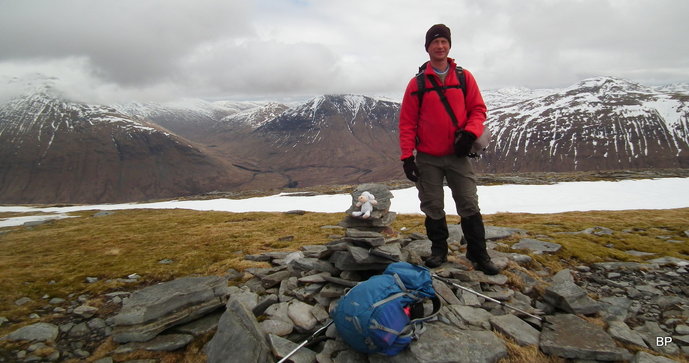 View south, cloudy at the moment:

No chance for bright blue sky, bit the cloud was slowly lifting:

After a short break for warming cuppa, I was ready to continue to the second Corbett: The ascent from the col to Beinn Udlaidh was the only slight concern for us, as we knew it was steep and rocky, but when we had a good look at it, we were confident, we could avoid wet rock and slushy snow:

On the way down to the bealach there are some crags to avoid, we kept to the right hand side (as facing down) where the ground was easier and less waterlogged. We were in excellent mood and despite gray conditions, we agreed this was a lovely day and a nice pair of mountains!

Looking back at Beinn Bhreac-liath from the bealach:

WH description mentions a stile in the fence dividing the ridge, but we discovered that a brand new gate has been installed to make things easier for lazy hillwalkers like us Glen Ghamhnain from the col:

The final climb, no probs there! We're going nowhere near the vertical cliffs! especially when they have seasonal waterfalls running down! To the right, the high pointy summit must be Beinn Challum: It's only about 200m of steep-ish ascent, most of it was on half-melted snow. Once on flatter ground, we spent some time taking photos and videos. Views, even on murky day, were superb. I'm actually surprised these two hills have such low ratings. They are much more entertaining than one might expect!

West to Cruachan group. We still haven't done the Cruachan horseshoe and I'm waiting for a warm, sunny day to tackle that route 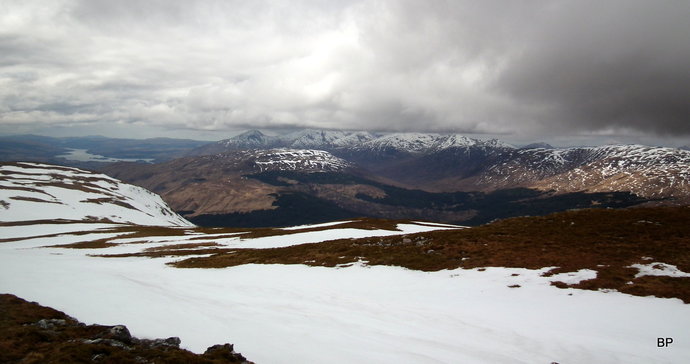 There are two cairns on the summit ridge, we visited both but took pictures by the bigger one as it offered some shelter from the wind. Corbett no. 135 bagged! Kevin and Lucy on the summit of Beinn Udlaidh: Hills to the south - cloud still low on that side: To descend from Beinn Udlaidh, we followed the northern ridge, hopping down on snow patches, until we reached an interesting rocky feature, a natural "stone dyke", where we stopped again for some filming:

Looking NE along the dyke:

Finding the way down the steeper side of the dyke proved tricky, we didn't want to slide down the slushy snow, but eventually we picked a route between rocks to the bottom of this interesting structure. Lower down, a line of rocks can be followed to reach the bottom of the glen: As we descended, we aimed for the edge of the forest until we met a fence. It is more practical to cross to the other side of the fence through a gate and follow a faint path down to the glen, where another gate gives access to a stalkers track along Allt Ghamhnain. The track dives into the forest and it is muddy here and there, but provides an easy return route to the road.
Beinn Bhreac-liath and Beinn Udlaidh might suffer from being located close to so many bigger, better neighbours, from Crianlarich Munros to Cruachan group and probably that's why they don't get enough credit, but as we discovered, even on a dull-looking day we still had a great day exploring them, strolling along ridges and running down snow patches. I wouldn't mind returning to this route one day but definitely in sunny conditions, when light is better for photos.
..........
In the next chapter of our spring walking I'll take you to a very obscure Graham. A perfect one to "do a Mallory": we climbed it because IT'S THERE!

Nice WR as ever, BP

Glad you enjoyed this duo - very underrated Corbetts but well worth exploring! The rocky dyke was partially covered in snow when we were there and we took some time to find a safe way down the slushy snow patches. Since then I noticed that it can actually be seen from A82 as you drive south past the hills. I hope the final descent through the forest wasn't too boggy, it was quite squelchy in spring

Lucy is currently on her 77th Corbett and aiming for a ton!