Streap&Uamhachan activelog 13may2018.gpx Open full screen  NB: Walkhighlands is not responsible for the accuracy of gpx files in users posts
Only car in the parking area just off the A830 at NM930799. Got ready then set off by bike up Gleann Dubh Lighe. Brief stop at the bothy and signed the book. 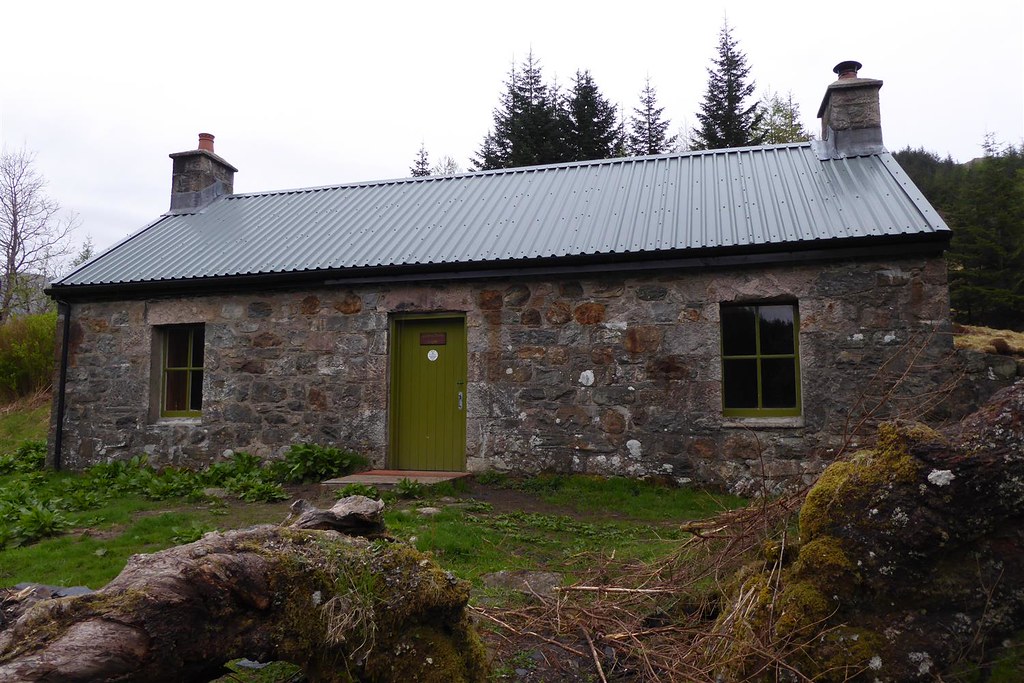 Continued on until I got to the edge of the forestry where I locked up the bike and continued on foot north towards Streap Comhlaidh. The track had been quite rough for cycling with frequent ups/downs so didn’t really save much time. 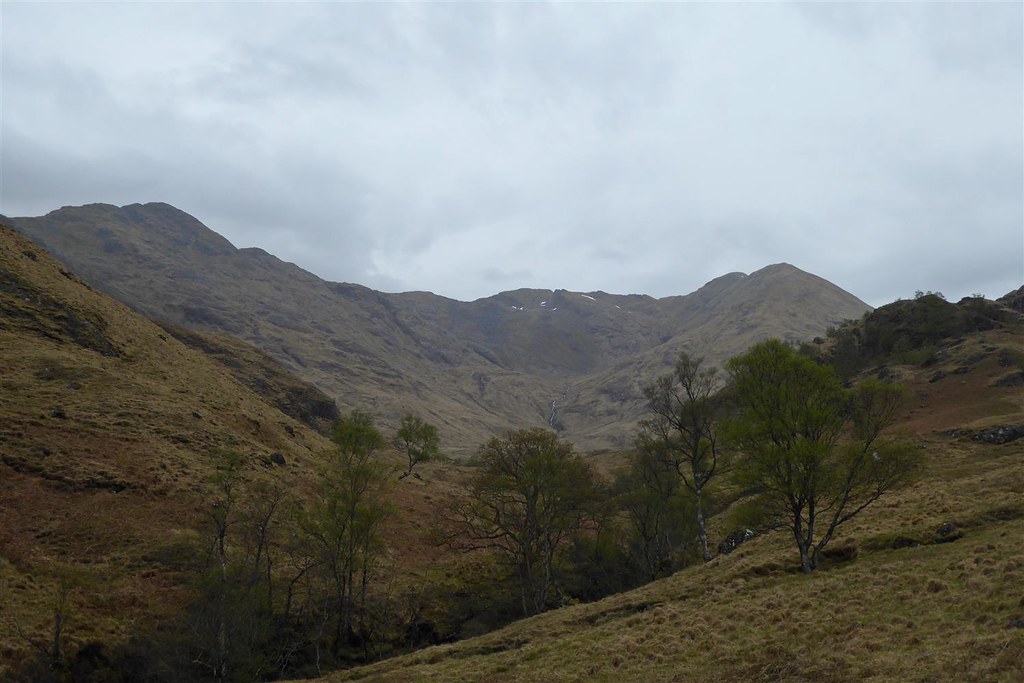 It had been raining lightly since the start and this continued – not heavy enough for waterproofs though. Followed a track to around NNM955487 at which point I started steeply uphill – about 600m of steep ascent to get to the top of Streap Comhlaidh. 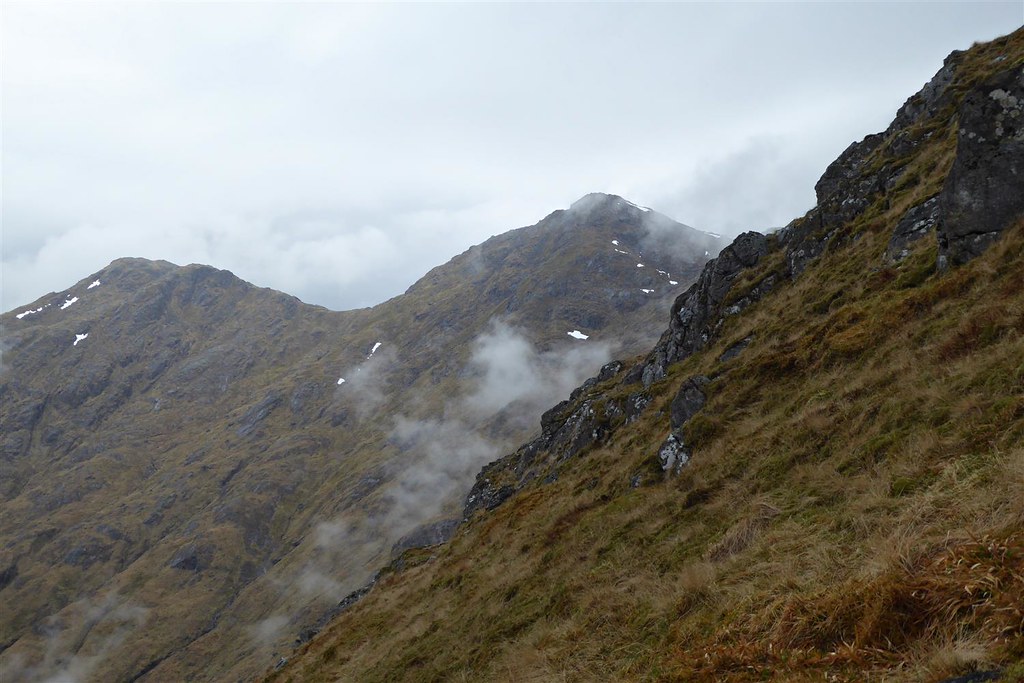 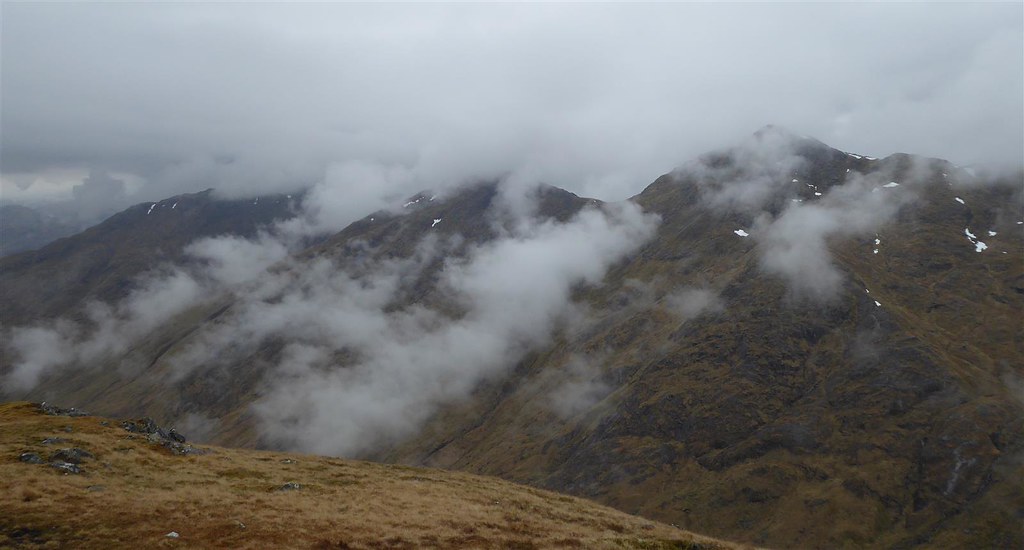 Then came the traverse of the ridge over to Streap – the clag was down with low visibility and a few snow patches to avoid so didn’t see much on the way to the Streap summit. 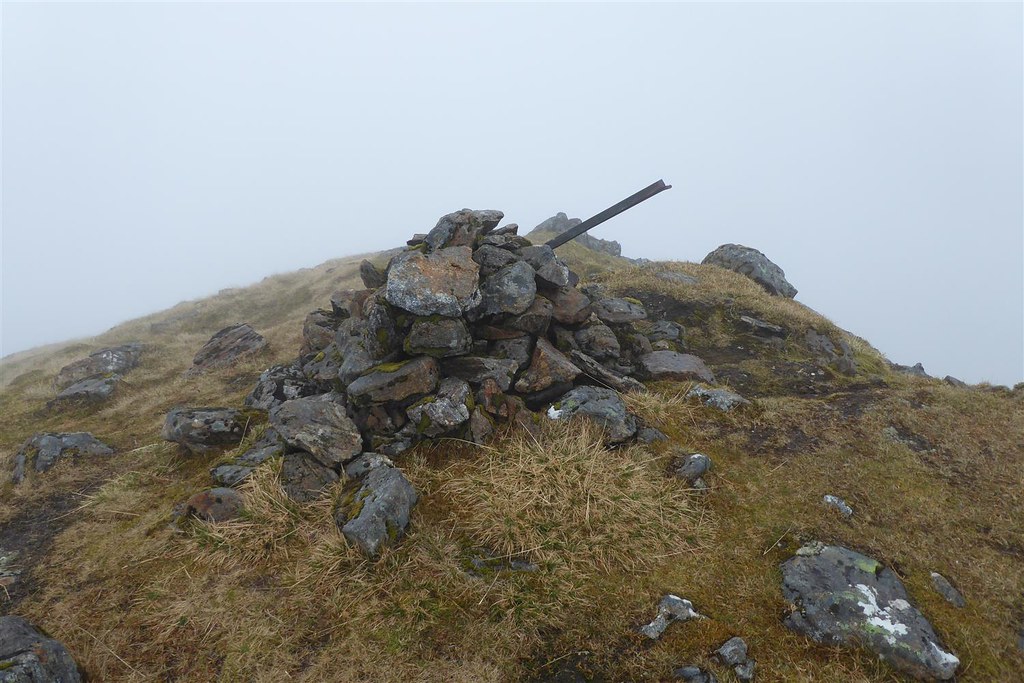 It didn’t want to clear so I set off for the return journey to Streap Comhlaidh. A little below the summit, the weather started to clear a bit and was wholly clear by the time I was back on Streap Comhlaidh. Still a lot of snow around. 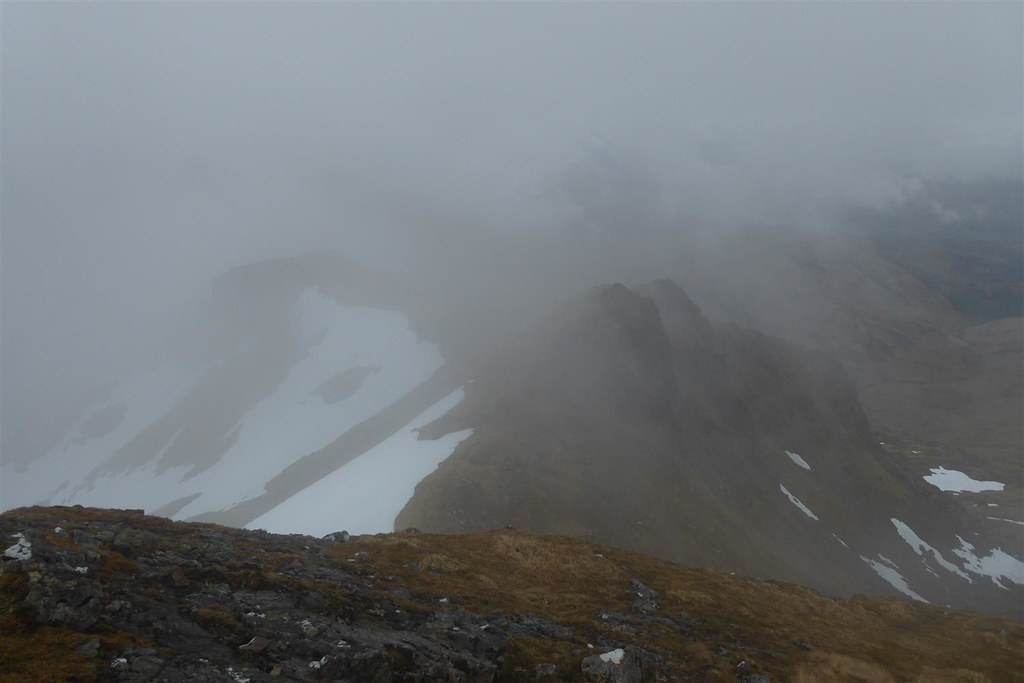 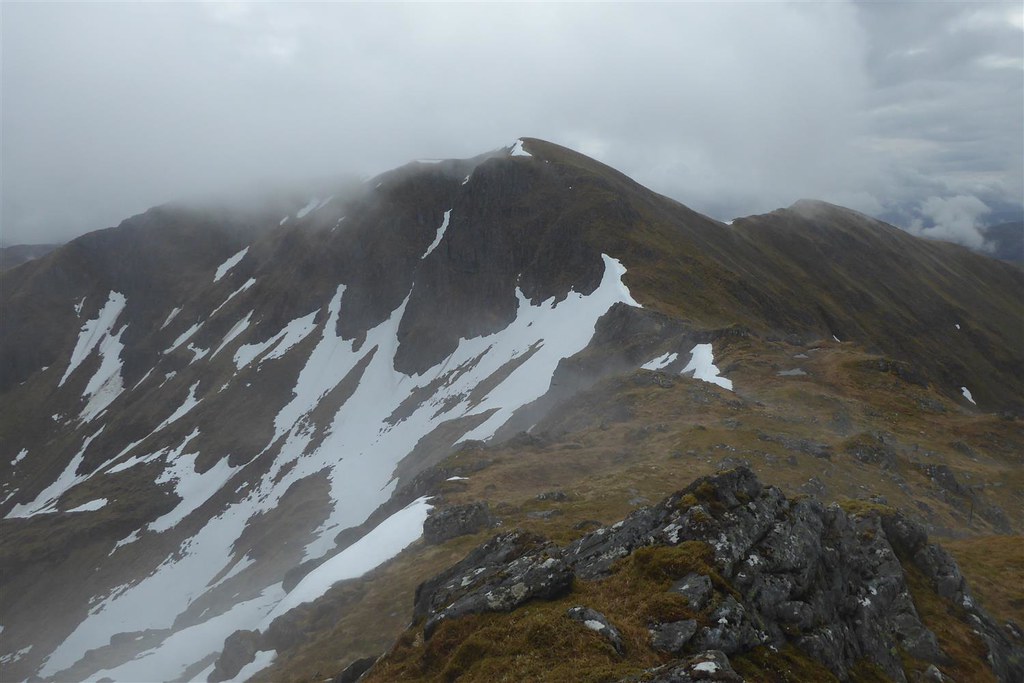 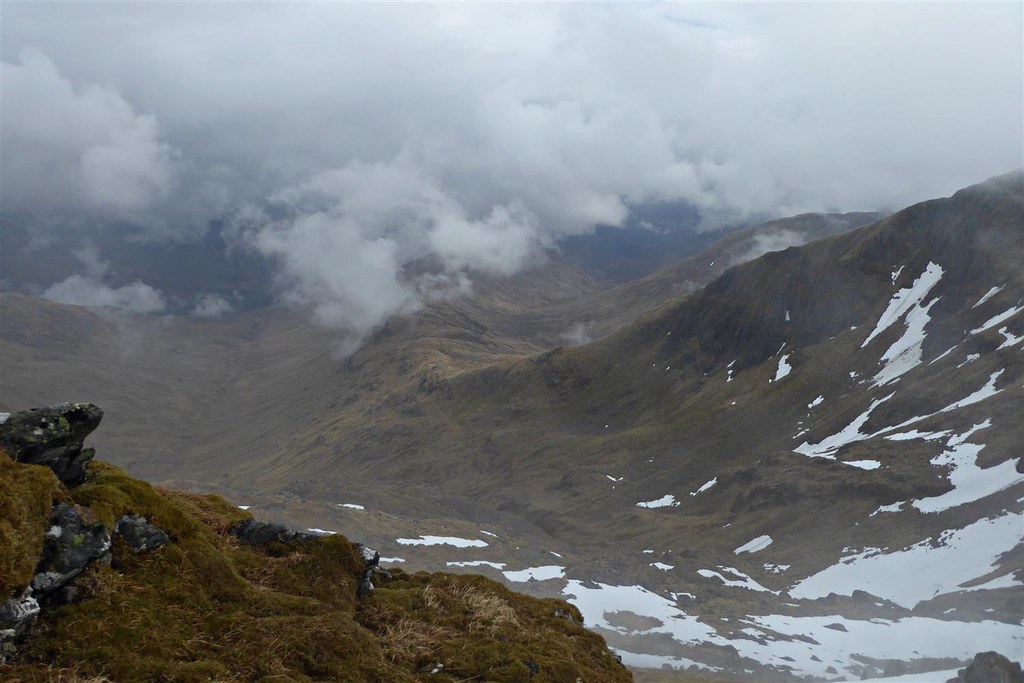 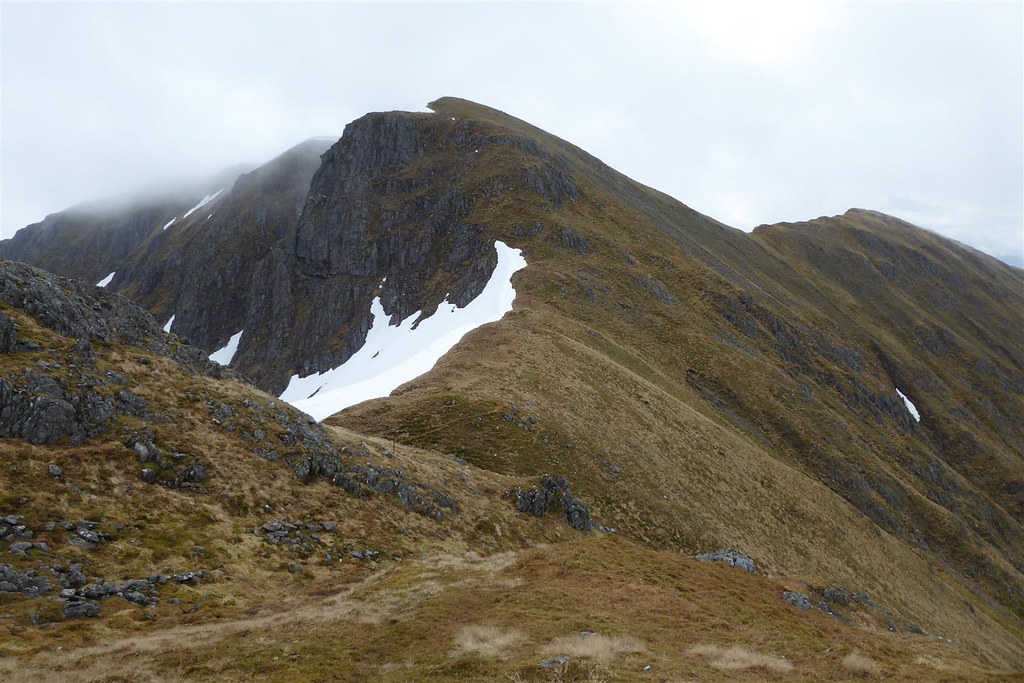 I was glad that the weather had cleared and the rain was off as this made finding a route to Braigh nan Uamhachan somewhat easier. 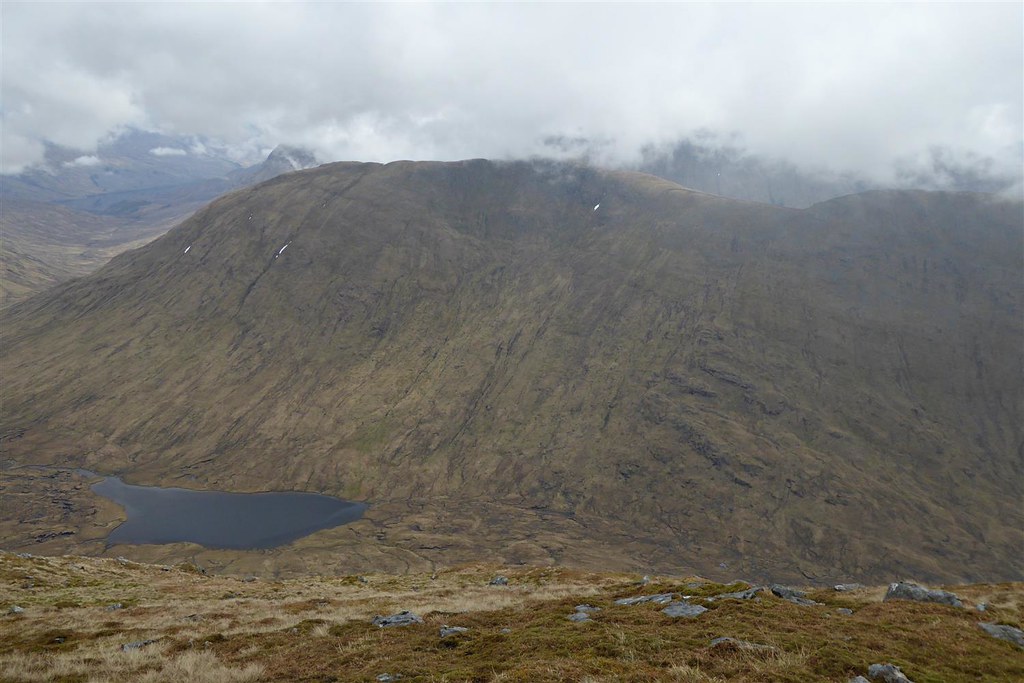 Headed NE down the ridge until I was more or less due west of the start of Lochan a’ Chomlain then headed west down towards the southern end of the loch crossing a stream en route which was partially set into a gully. 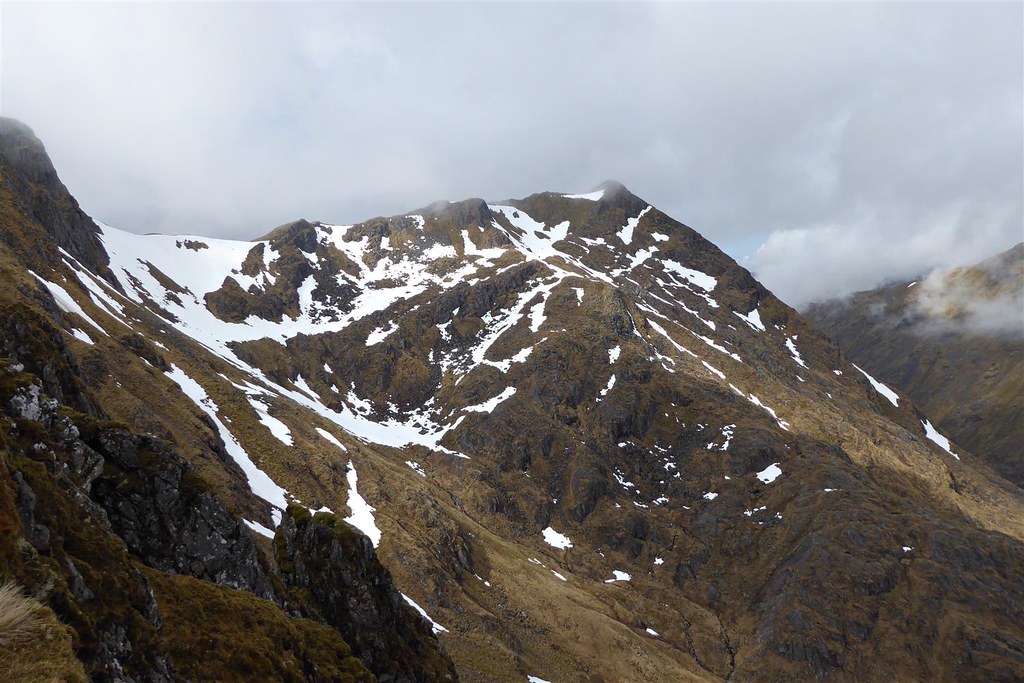 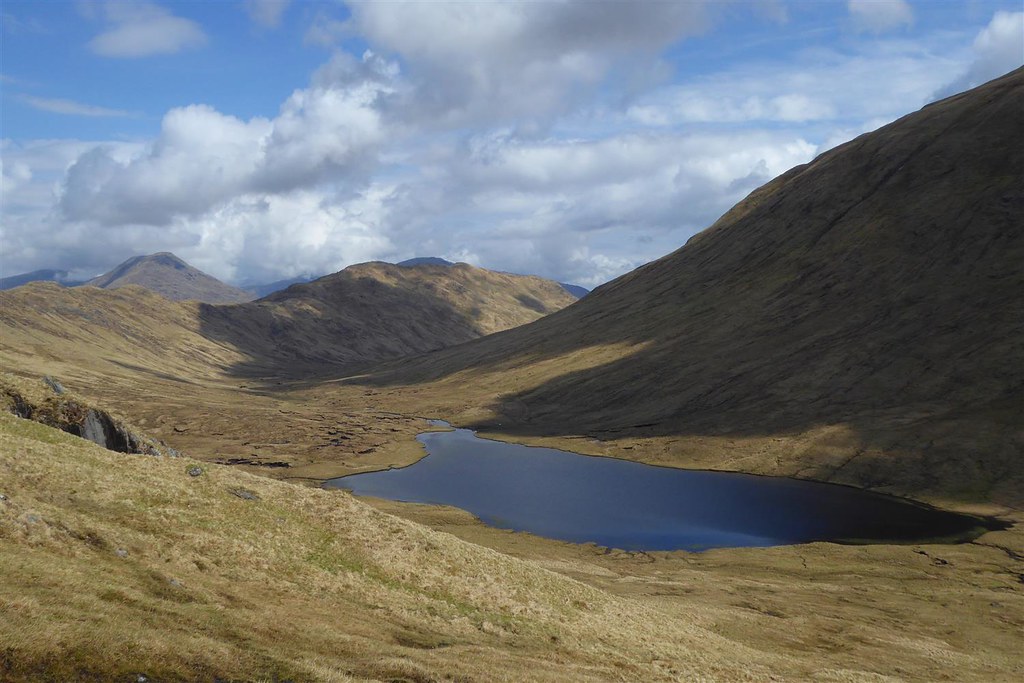 The side of Uamhachan looked intimidating from higher up but now down at the foot of it, it didn’t look so bad as is frequently the case. Picked a route more or less straight upwards heading for the summit. 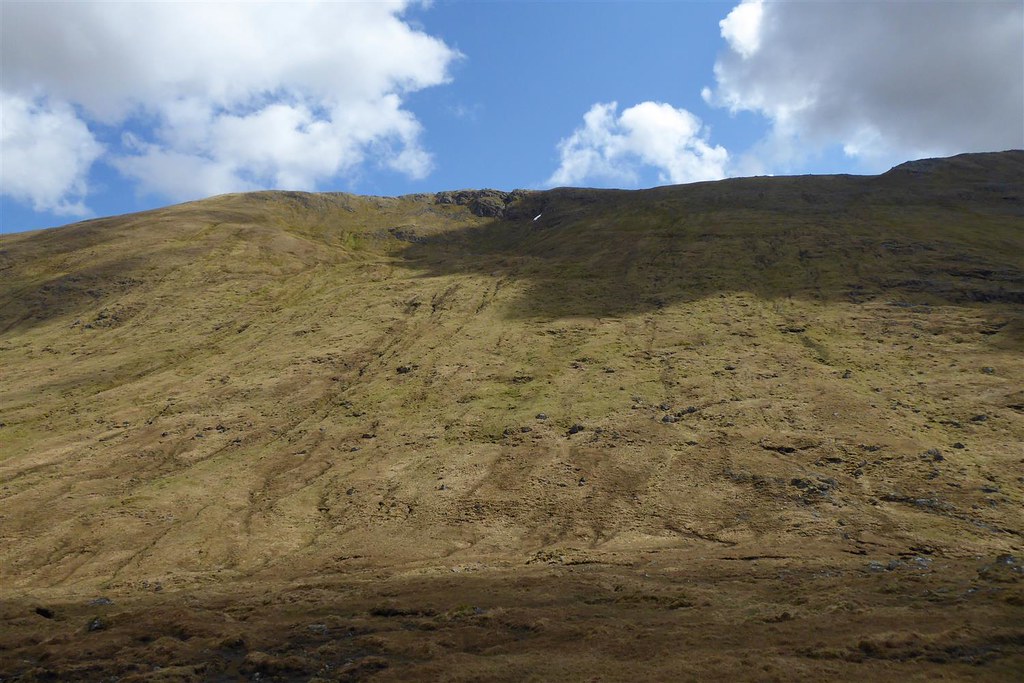 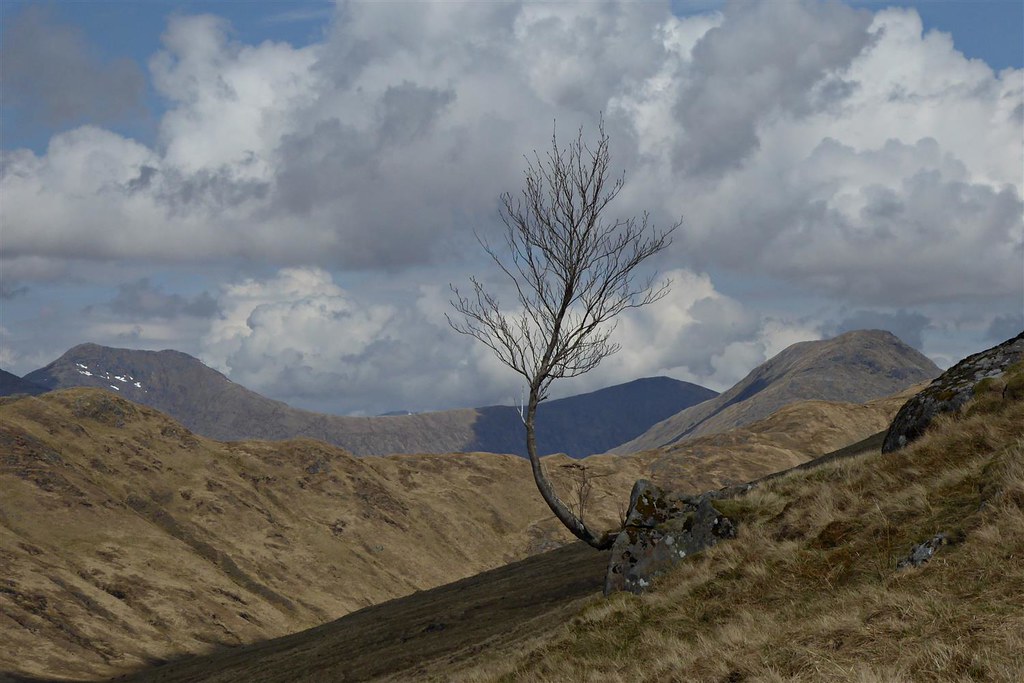 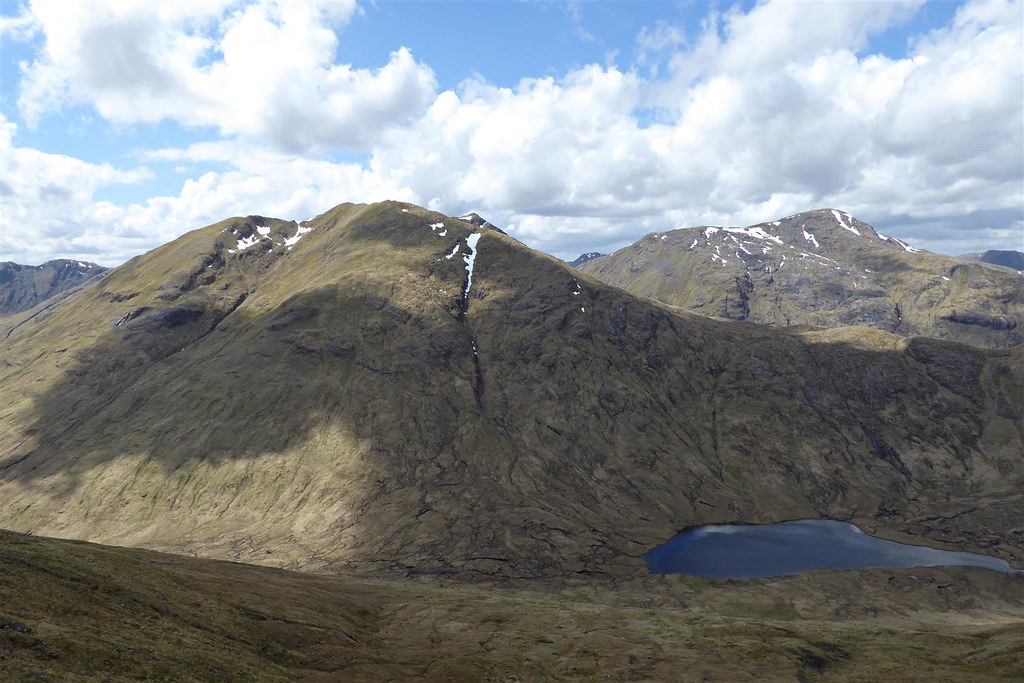 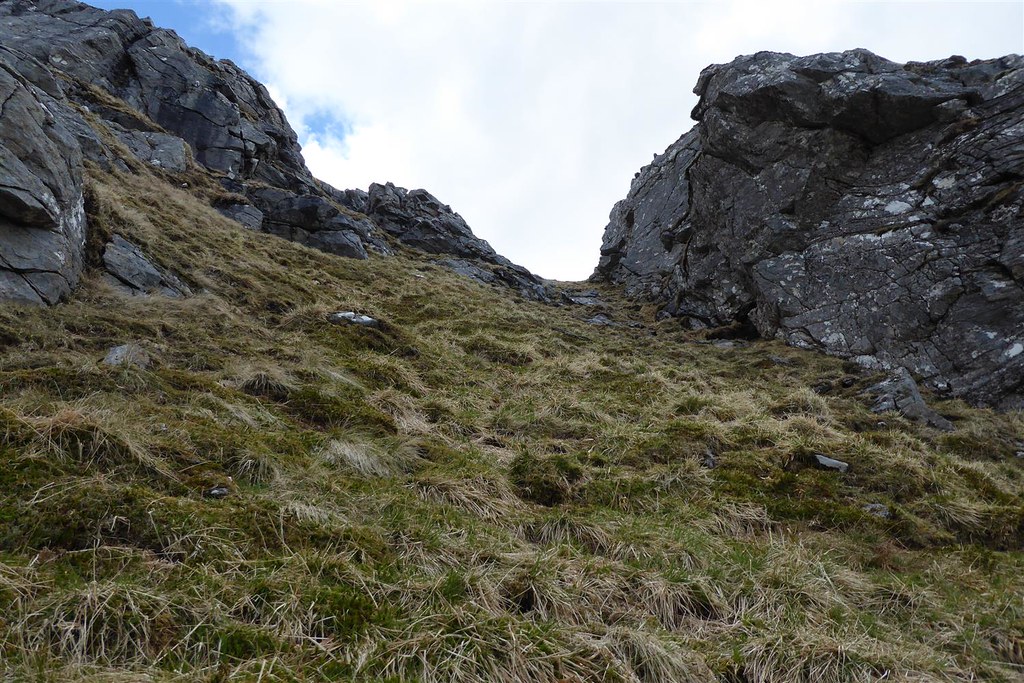 It had turned out quite nicely at the summit 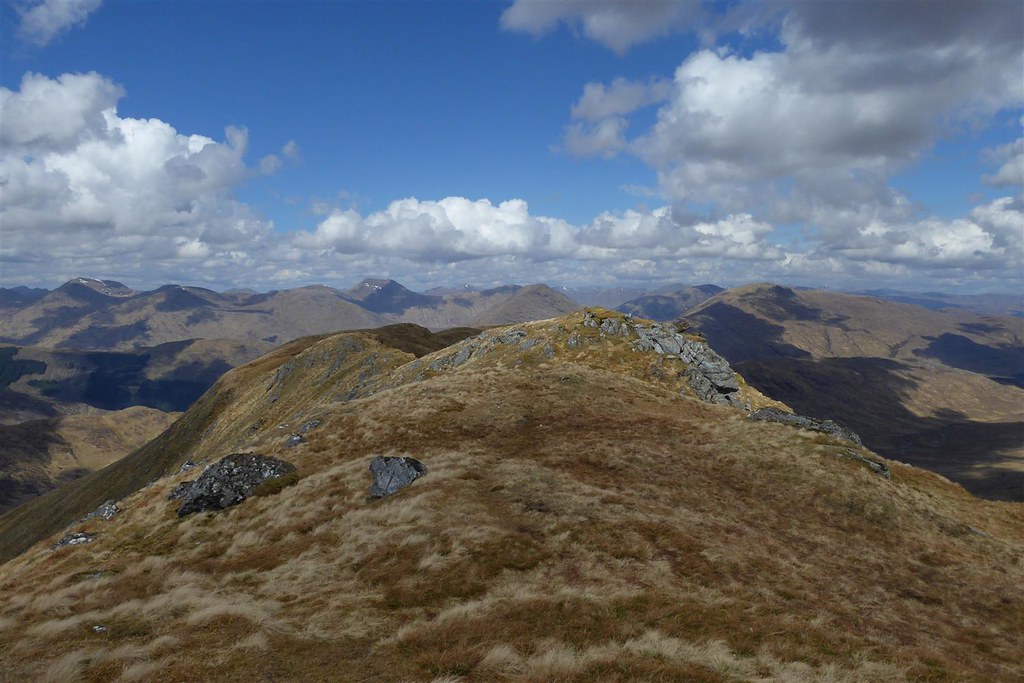 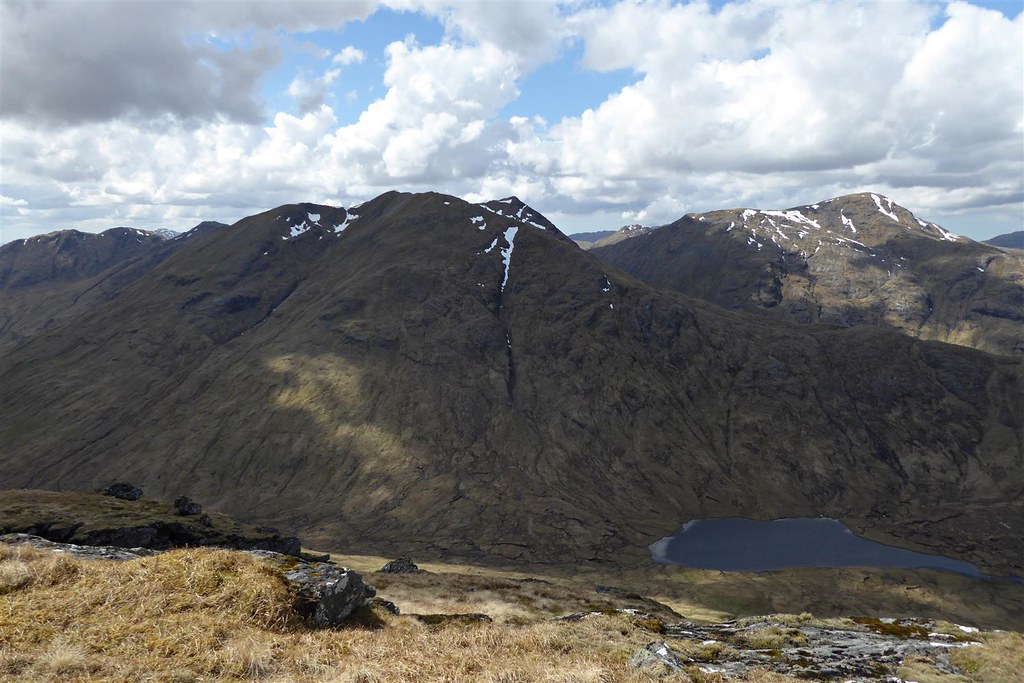 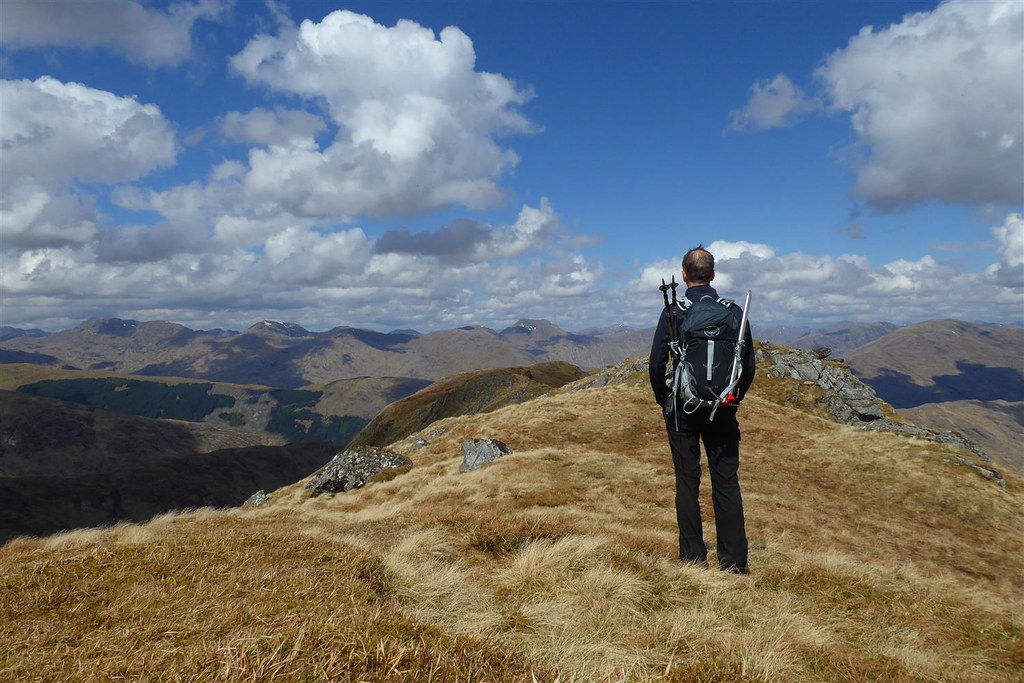 Another walker arrived at the summit a little after me. His friend had stopped a little further back so he didn’t wait long then headed off – they had come up via Gleann Fionnlighe and left their bikes lower down. 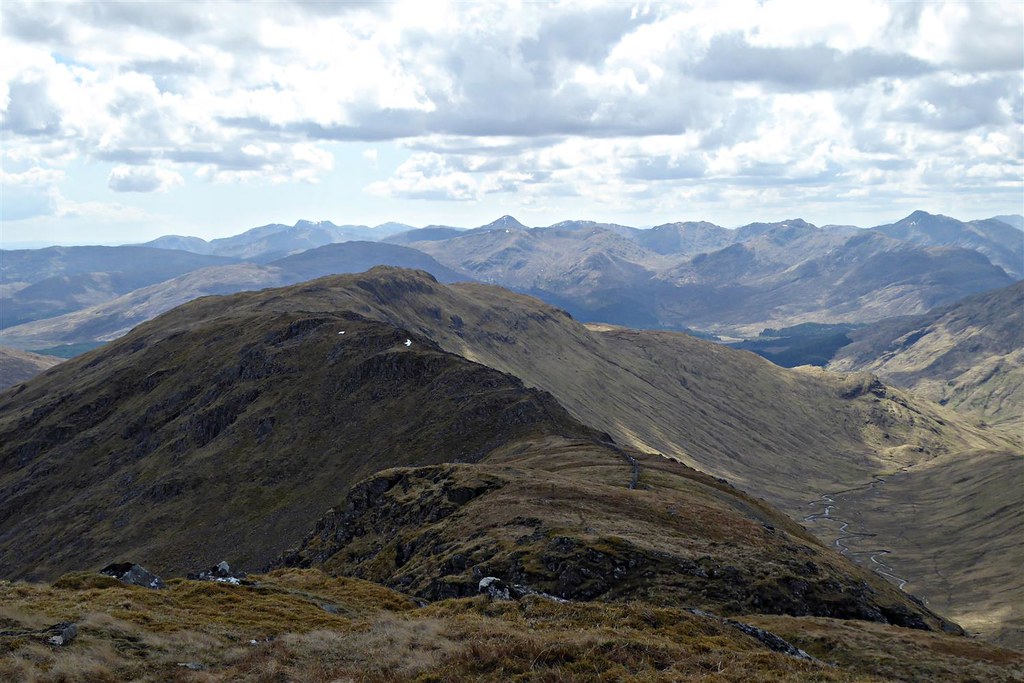 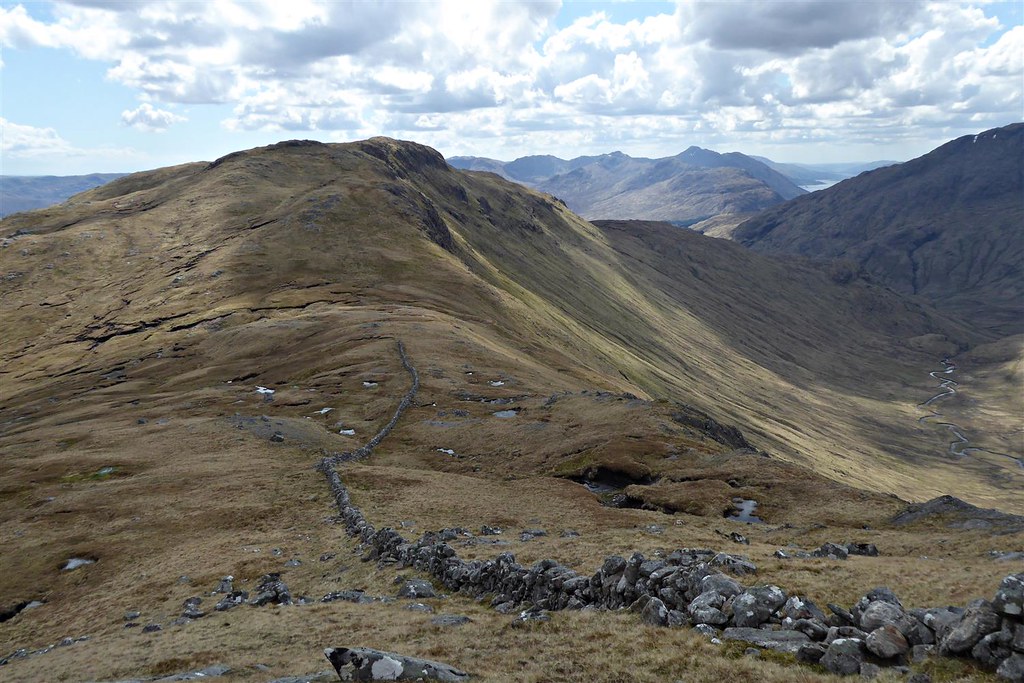 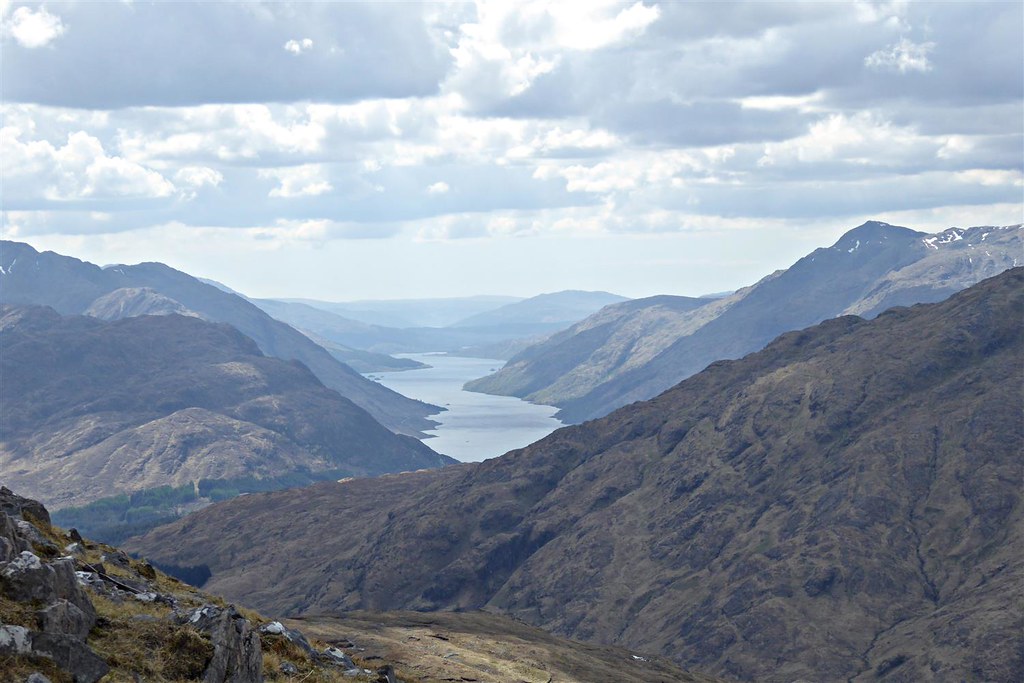 Passed a dead deer on the way back down to the bike – must have been fairly recent as it was fully intact. 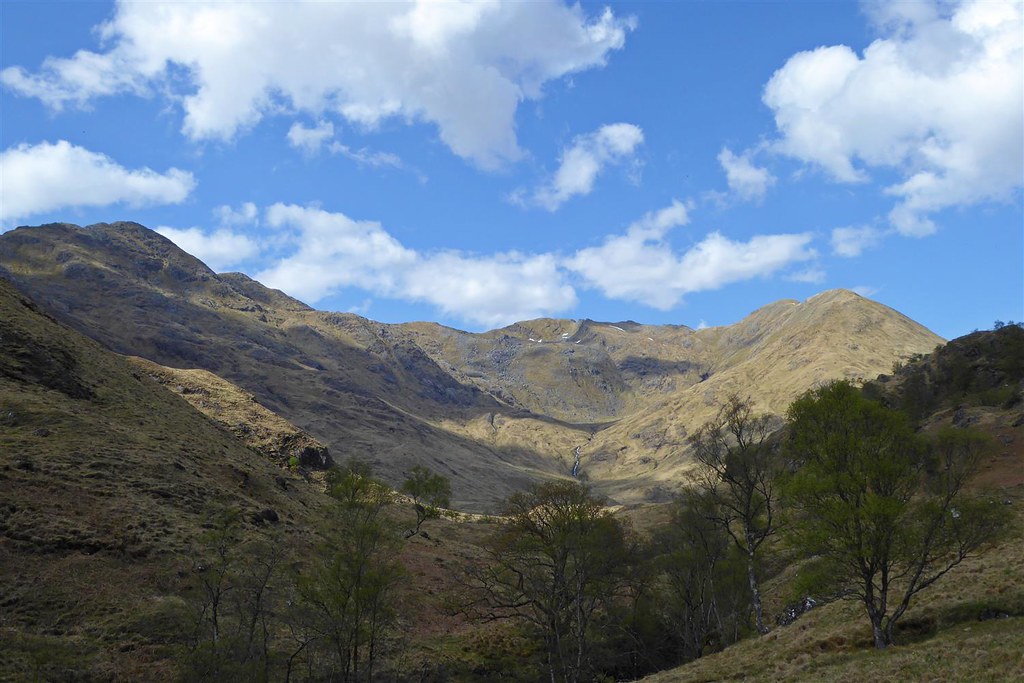 Picked up the bike and cycled back to the car. Again this took longer than expected. I’ve only fairly recently started using walking poles for day walks (used to use one when carrying a camping pack) but was trying today to see how I got on without using them at all. Have come to the conclusion that I’ll keep using them from now on as they do seem to help quite a bit esp on uphill sections – am having to admit that perhaps age (and level of “unfitness”) are perhaps starting to catch up on me.....

That's a very nice upturn in the weather. Would have been a shame to miss those views.

Both good hills - shame you missed out the ridge up to Streap, that's great fun!

litljortindan wrote:That's a very nice upturn in the weather. Would have been a shame to miss those views.

Jaxter wrote:Both good hills - shame you missed out the ridge up to Streap, that's great fun! Smashing part of the country - glad you got views in the end

Having looked across at Streap and Thuilm a couple of weeks ago, and as a result bumped them up my priority list, it was good to be treated with this report, and especially the tip with the bike! I'm not so keen on track walking...

Given the long drive for me, I'll probably make it a multi-day trip (if I can face lugging a big sac around again

Glad you got good viewing weather in the end. This area has a particularly wild attractive aspect that's a joy to be able to see at its best.

Some nice views there RH. Agree about the poles, never without them these days, helps going up, saves the knees coming down

As for poles, I’m never without them, just got a new pair of Black Diamond Poles lightest I’ve ever had

gammy leg walker wrote:you seem to be after my clagmieser crown

Nice one Rockhopper. I did Streap from Glenfinnan which would have been good for the bike too but for some reason I cant remember, we didn't take the bikes and walked a good bit on the private tarmac road.
A great hill Streap.
I use a walking pole only on descent to help the knees. I only use one and find it helps a lot.
All the best

Somehow I knew you'd to the two in one go

They are both superb hills, Braigh is a bit underrated IMHO, I loved the long ridge walk!

When I started serious hillwalking, I used to walk without poles but Kevin convinced me to start using one. Initially I found it annoying. Now, with two dodgy and sometimes sore knees, steep descents without walking poles would be a torture. I don't think it's an age thing, just a matter of luck. Some people don't complain from knee sores even in later years, some (like me) just get it tough. The split I suffered 2 years ago on Storr slopes didn't help either...

At least Kevin can say he always walks with his favourite Pole!